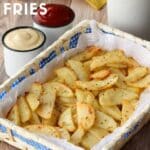 These baked potato fries are spicy, garlicky, easy and delicious. Serve them with ketchup or vegan sour cream for the perfect side dish.

So, who doesn’t love fries? I think pretty much everyone loves ’em.

And what’s also great is you can put all sorts of delish flavorings with them like crushed garlic and rosemary and onion powder and oh my…. it’s so good I actually just want to make another batch right now!

We’ve got a thing in South Africa called ‘slap chips’ it basically means soft(er) fries, so fries that are not ultra crispy. And we love those!

So I’ve got a way to make these come out like that (which is how they are in these pictures) OR if you want them to be really crispy then I’ll tell you how to make them like that too. The difference really comes in with oven temperature and how long you bake them.

How To Make Baked Potato Fries

And then you just throw them into a bowl with some olive oil, dried rosemary, salt, pepper, crushed garlic and onion powder and toss together until lightly coated in the oil (only 1 Tablespoon of oil for the whole batch, and it’s totally enough).

Then you just place them evenly onto a parchment lined baking tray.

Bake in the oven for 40 minutes, and you’re done.

We served these with vegan sour cream and ketchup. Of course some vegan mayonnaise is also good for serving, I have a recipe for homemade vegan mayo that just about blew my mind, I had no idea making your own vegan mayonnaise could be so easy. But let me not go off on a tangent about vegan mayonnaise now. Vegan aioli is also great for dipping.

They are also divine with vegan chickpea burgers, tofu burgers, or vegan falafels. 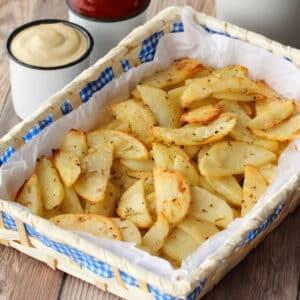