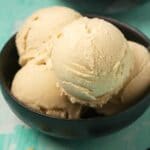 This cashew ice cream is rich and creamy and made with homemade cashew milk for the creamiest, most perfectly textured ice cream ever!

I got some great tips for making vegan ice cream from a book called Artisan Ice Cream and incorporated them into this recipe.

The main takeaway I got from the book was to use cacao butter in vegan ice cream, and this, along with homemade cashew milk, creates a really great ‘chew’ to vegan ice creams.

Well… let’s just say I didn’t know I had been missing the ‘chew’ but yeah, this has some chew!

It is creamy to the max with amazing texture and it has all the cashew flavor you can dream of. And before you say, but…aren’t cashews quite neutral in flavor? Well, yes.

But this cashew ice cream uses cashew butter made from roasted cashews and that really makes that cashew flavor pop.

How To Make Cashew Ice Cream

First, you need to make some homemade cashew milk.

Then drain the cashews and add them to a blender with fresh water. Blend until super smooth and creamy. The cashews blend into the water perfectly and you don’t even need to strain it like you do with other nut milks.

Add your prepared cashew milk to a big bowl along with canned coconut cream. Set aside.

Add white granulated sugar and water to a saucepan and heat, stirring constantly until the sugar has melted.

You’ll know it’s melted when your wooden spoon is no longer making a scratchy sound along the bottom of your saucepan.

When the sugar is melted, add chopped cacao butter, coconut oil, cashew butter, salt and coconut sugar and whisk it in until it’s all melted together.

Pour that out into your bowl with the cashew milk and coconut cream.

Blend with an immersion blender until well mixed.

If you don’t have an immersion blender then you can transfer all of it to your regular blender and blend.

Place the whole mixing bowl into the freezer to chill for 15-20 minutes so that your ice cream mix is nice and cold before churning. If it hardens along the sides then just whisk it up again.

Pour the ice cream mix into your ice cream machine and churn it until it reaches a soft serve consistency.

Then smooth it down into a loaf pan, cover and place into the freezer until set.

It can take several hours to set completely.

Homemade cashew milk – is crucial because the version you’re going to make is really more like a cashew cream than cashew milk. It’s extremely rich and creamy. The cashew milk you buy from the store will never be as thick and creamy as the one you’ll make.

Coconut sugar – really provides a wonderful depth of flavor to this, but you can switch for brown sugar in a pinch.

Cashew butter – should ideally be made from roasted cashews to really get that cashew flavor going. You can also make your own homemade cashew butter.

Soak your cashews. This is a crucial step in getting the right consistency to your homemade cashew milk.

Have all your ingredients measured and weighed. It’s ideal to have everything prepared before you start, because once that sugar is melted, you need to move fast adding in your cacao butter, coconut oil, cashew butter, coconut sugar and salt to the saucepan and melting it all together.

Ice cream maker. We have a Cuisinart ice cream maker and I highly recommend it. It churns the ice cream into the perfect soft serve consistency in record time (usually around 25 minutes).

Even though it’s ice cream it’s still best eaten within the 1-2 weeks after making it. Any longer than that and ice crystals may start to develop. 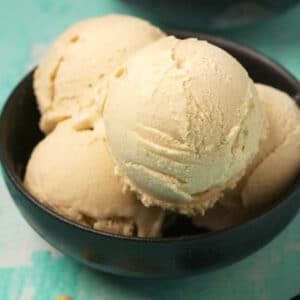 For the Cashew Ice Cream: