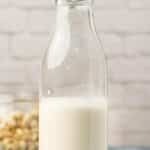 Easy step by step guide to making the creamiest dreamiest homemade cashew milk. Wonderful in tea and coffee or over cereal or just to drink as is.

Making your own homemade nut milks is a valuable life skill. Even though buying non-dairy milks is super easy these days (and thank goodness for that), there’s something very satisfying about making your own.

You can just sort of sit there smiling smugly to yourself, knowing that you can make your own. Anytime you want.

And while the stuff you buy at the store is pretty darn fabulous, there is something a little extra special about the homemade variety.

And then….cashew milk in particular? Well…it’s one of the best tasting plant milks ever.

I remember the days of drinking cows milk and then contemplating switching to plant milks and trying out soy milk for the first time. I remember thinking ‘oh geez now this is going to be an acquired taste’.

I definitely DID acquire the taste and now I love it, but if someone is new to non dairy milks or you just want to try them on a plant milk then cashew milk, especially the homemade variety, is just so darn tasty it’s probably the easiest one to transition to.

It’s also closest to dairy milk in the way that it tastes in tea and coffee. It is also very white so it lightens tea and coffee in the same way that dairy milk does, so that’s another familiar thing for someone who is trying out plant milks for the first time.

The best thing about making your own cashew milk is you get to make it as creamy as you want. And this cashew milk is super creamy. You’re going to be looking for ways to use it up so you don’t waste a drop.

And if you love making homemade milks then you’ll also love our oat milk and almond milk recipes.

How To Make Cashew Milk

The main thing to remember is to put the raw cashews on to soak for an hour before you can start making this. So put the cashews in a bowl, pour boiling water from the kettle over them until they’re completely covered and then just leave them for an hour.

After an hour, drain them, add them to the blender with some fresh water, maple syrup, vanilla extract and salt.

How To Use Cashew Milk

It replaces dairy milk perfectly in tea and coffee. While we had a batch of this in the fridge I must confess to drinking much more coffee than usual! It’s very creamy and most closely matches dairy milk when used in coffee in terms of taste and color. It’s like a full cream milk in that respect.

It’s also delicious in hot chocolate and divine with cereal too. It’s also really good tasting to just drink as is.

It thickens when heated. It can be added to hot drinks without any problem, but it does thicken when heated. I tried it with our recipe for vegan hot chocolate and while heating on the stove it thickened up quite a bit. So it is best to add it to a hot drink, don’t heat it up with the hot drink.

We use cashews for thickening all the time, in recipes like our vegan korma and our vegan scalloped potatoes and vegan mushroom stroganoff.

What does cashew milk taste like? It tastes wonderfully creamy with a very neutral flavor profile. It’s closest to a full cream milk or dairy cream in taste and texture of all the plant milks I’ve tasted.

What is the difference between homemade cashew milk and store-bought? Store-bought varieties tend to be much thinner and less creamy. When it comes to real deliciousness, you can’t beat homemade.

It keeps for around 3-5 days in the fridge. I have had it last only 3 days and then also had it last 5 days! Not sure what the difference was. But ideally you want to drink it within 3 days for the best taste results.

It does separate in the fridge and this is totally normal, just shake it up and carry on.

It also freezes well. You can freeze it in ice cube trays for an easy way to pop them out and use in your coffee, or freeze it any way you usually like to freeze milk. 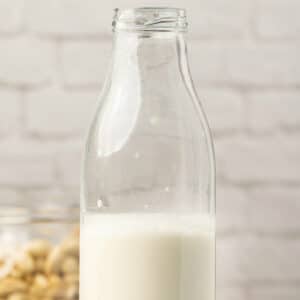