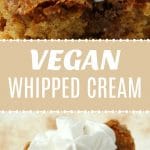 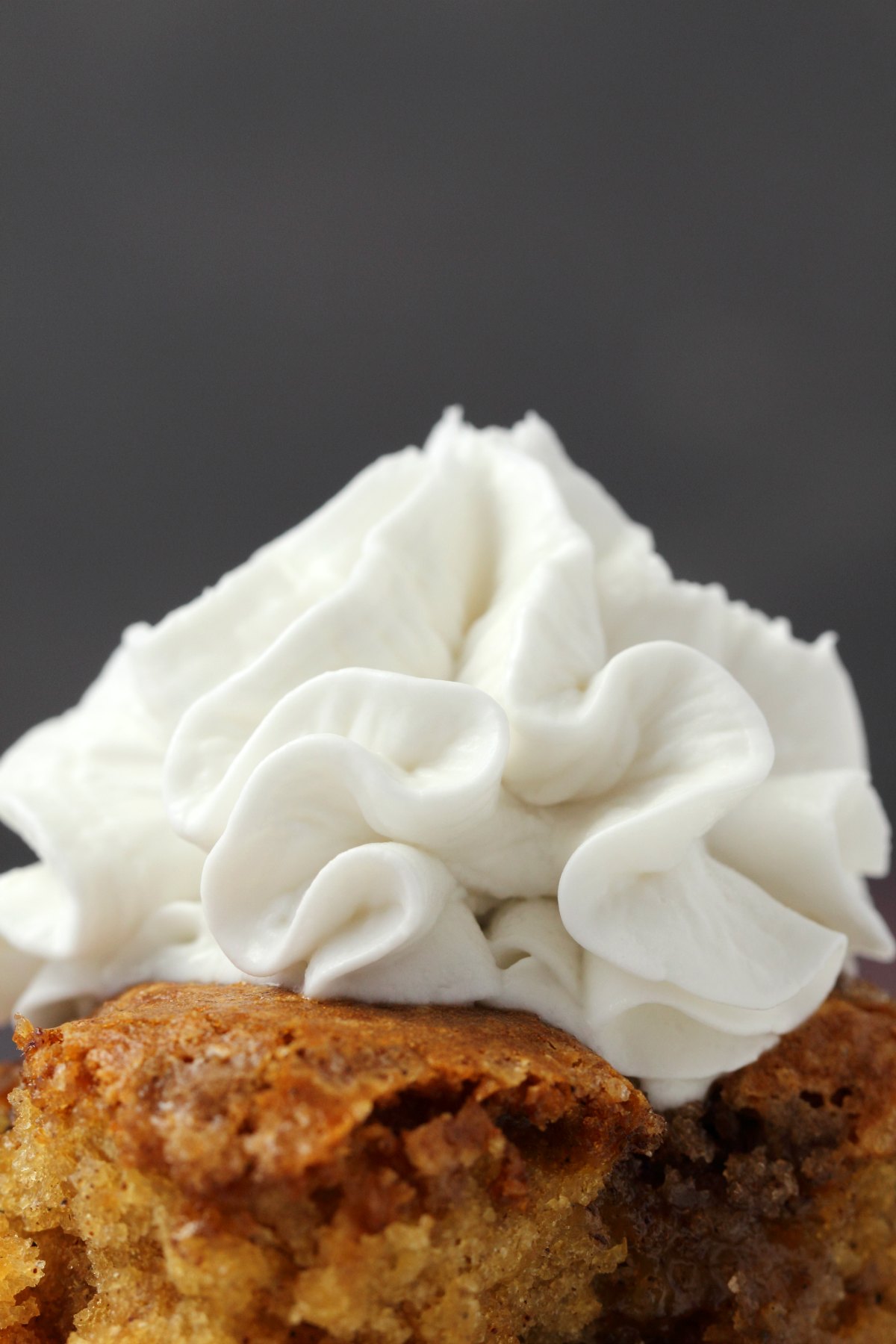 Before I was vegan I was a bit of a fan of the old whipped cream. I mean I’m betting you probably were too!

But I can confidently say that whipped coconut cream…is better!

Wherever you would have used regular whipped cream – use this instead! 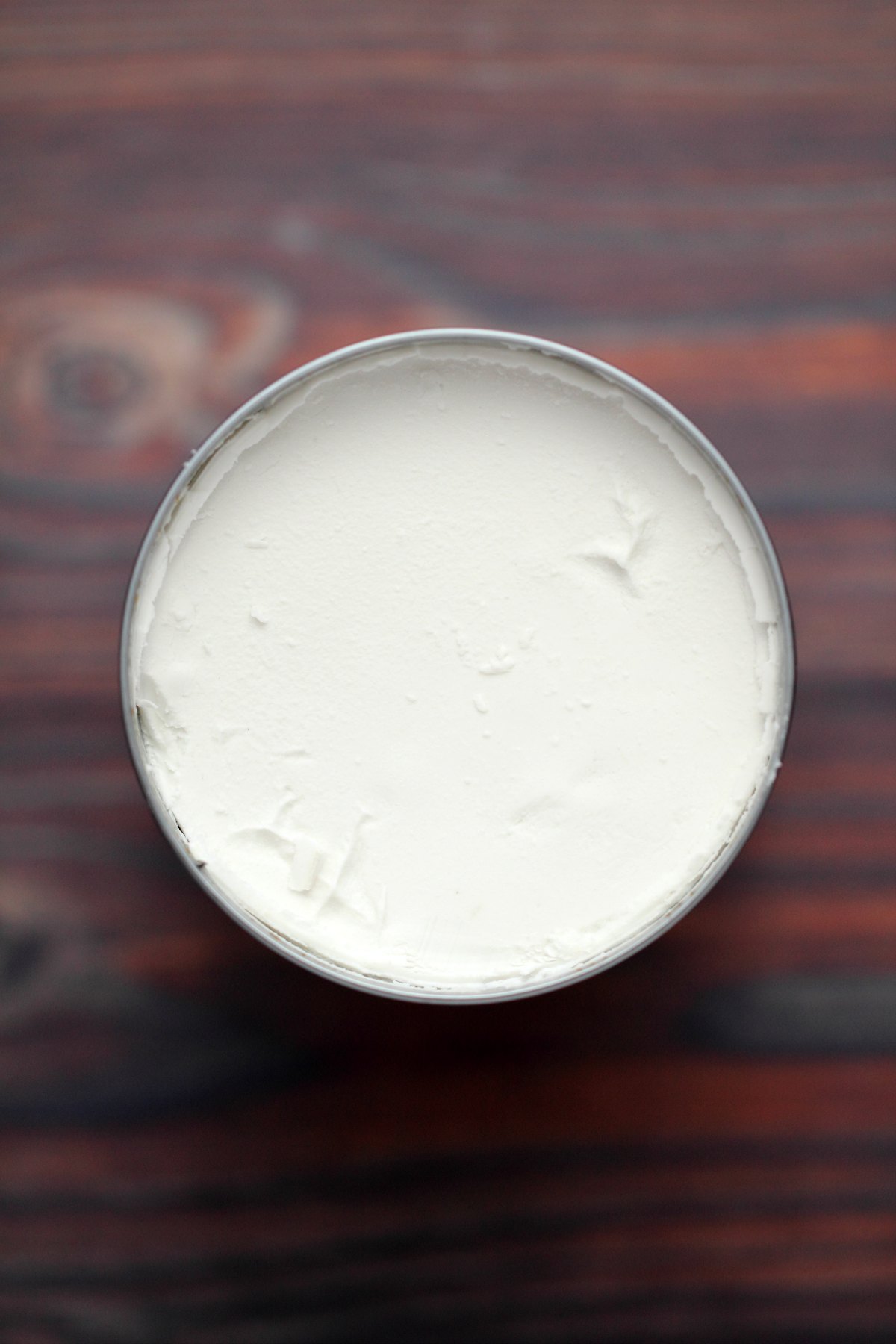 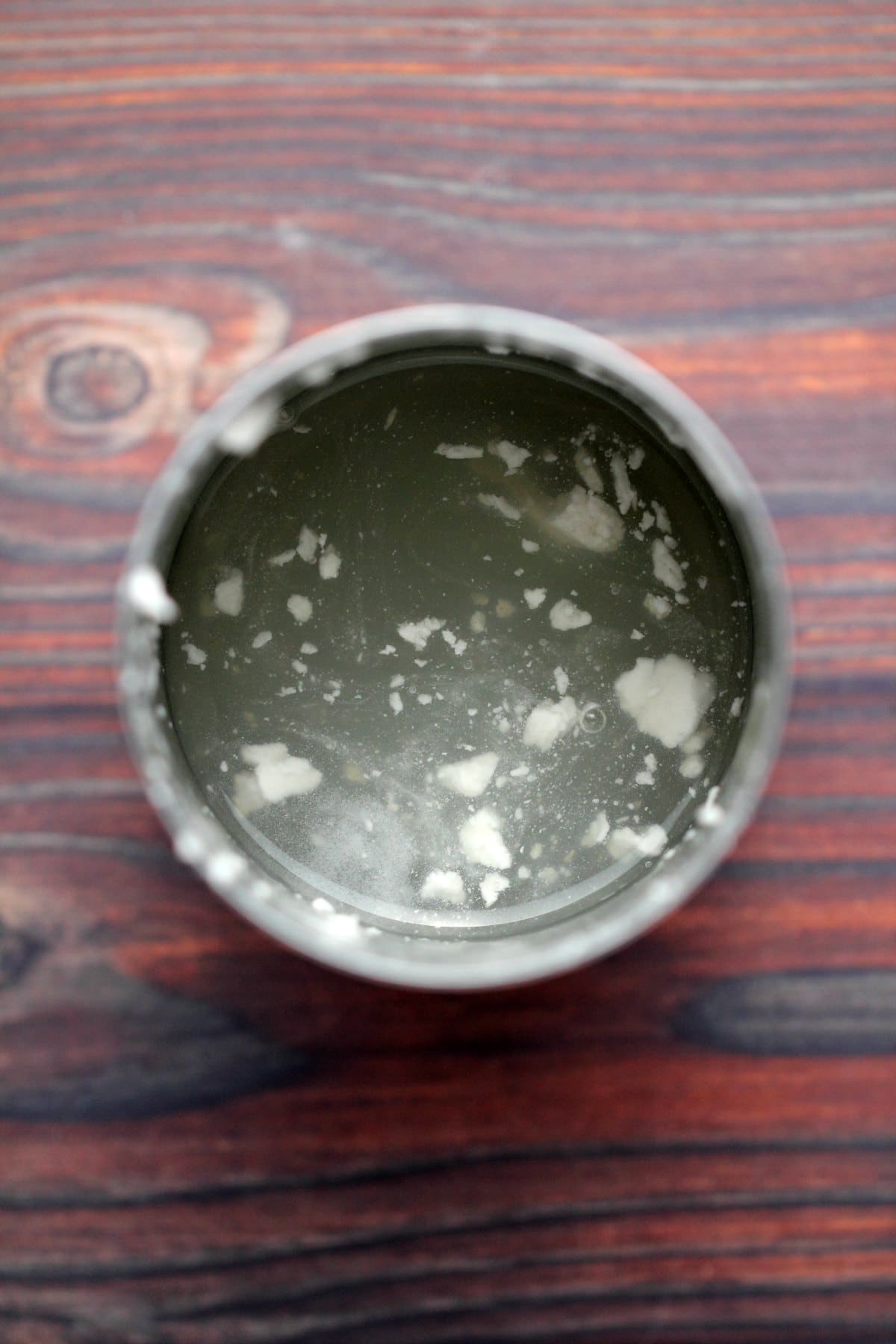 How to make vegan whipped cream

First you need to refrigerate a can of coconut cream overnight. Place it into the coldest part of your refrigerator and leave it there at least overnight. In fact, if you find a brand of coconut cream that works great for making vegan whipped cream, then just leave a few cans in the top of your fridge permanently. This is what I do, so I’m always ready to whip up a batch of whipped cream on short notice.

Coconut cream is the best to use here, better than coconut milk. Coconut cream has a lower water content, so basically you’ll get more bang for your buck. This can also work with a can of full fat coconut milk but the best results are going to come from using coconut cream. 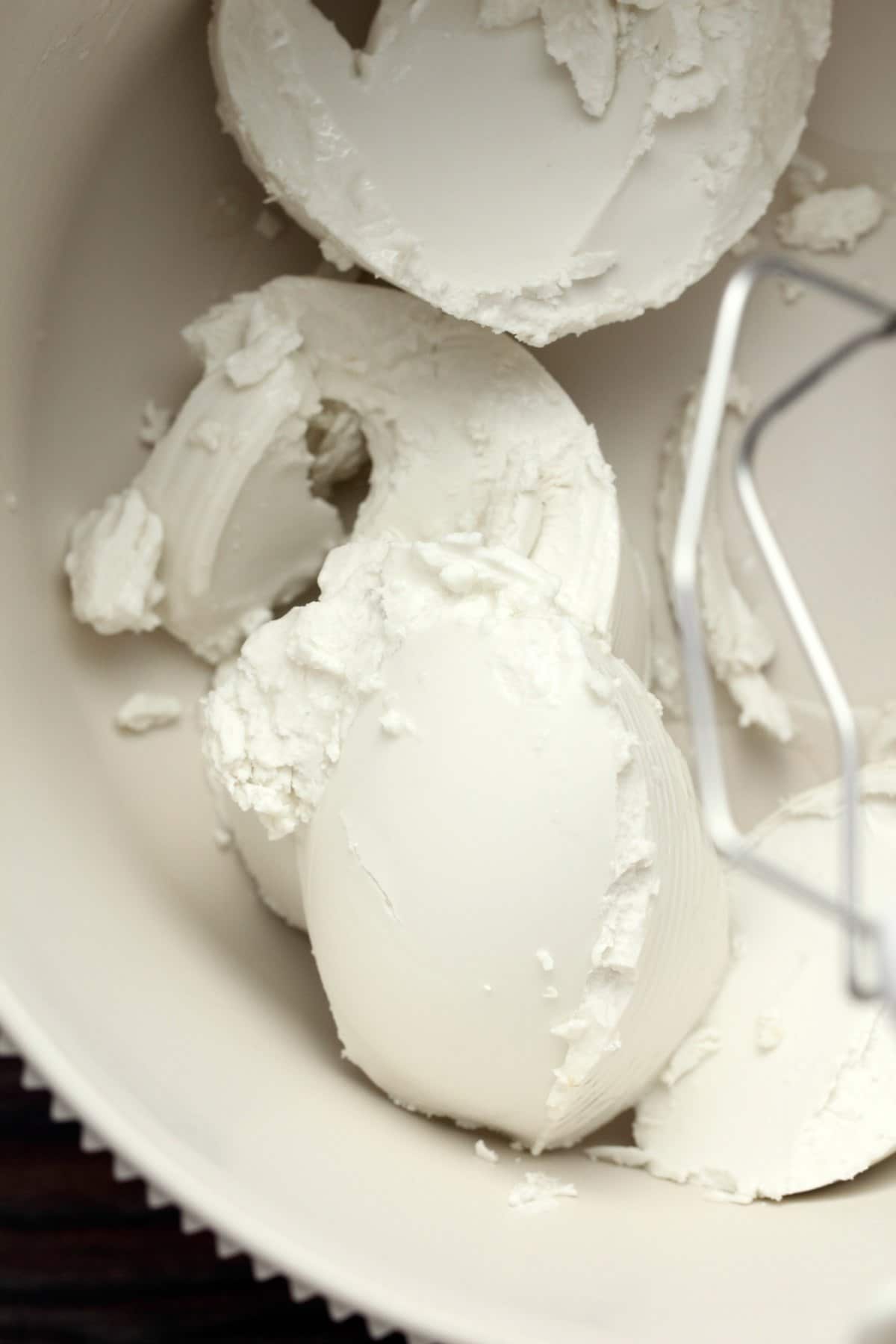 After your coconut cream has chilled in the fridge for at least 12 hours, then remove the can from the fridge, being careful not to shake it. Open it up and you’ll see the cream should have all risen to the top and hardened.

Depending on the brand of coconut cream you’re using, whether the cream is super hard, or just slightly firmed up, can be quite variable.

Scoop only the cream part out into the bowl of an electric mixer, leaving the watery part behind.

As you can see above, the cream in this can was very solid, and once scooped out, it leaves a fair bit of the separated water section behind. 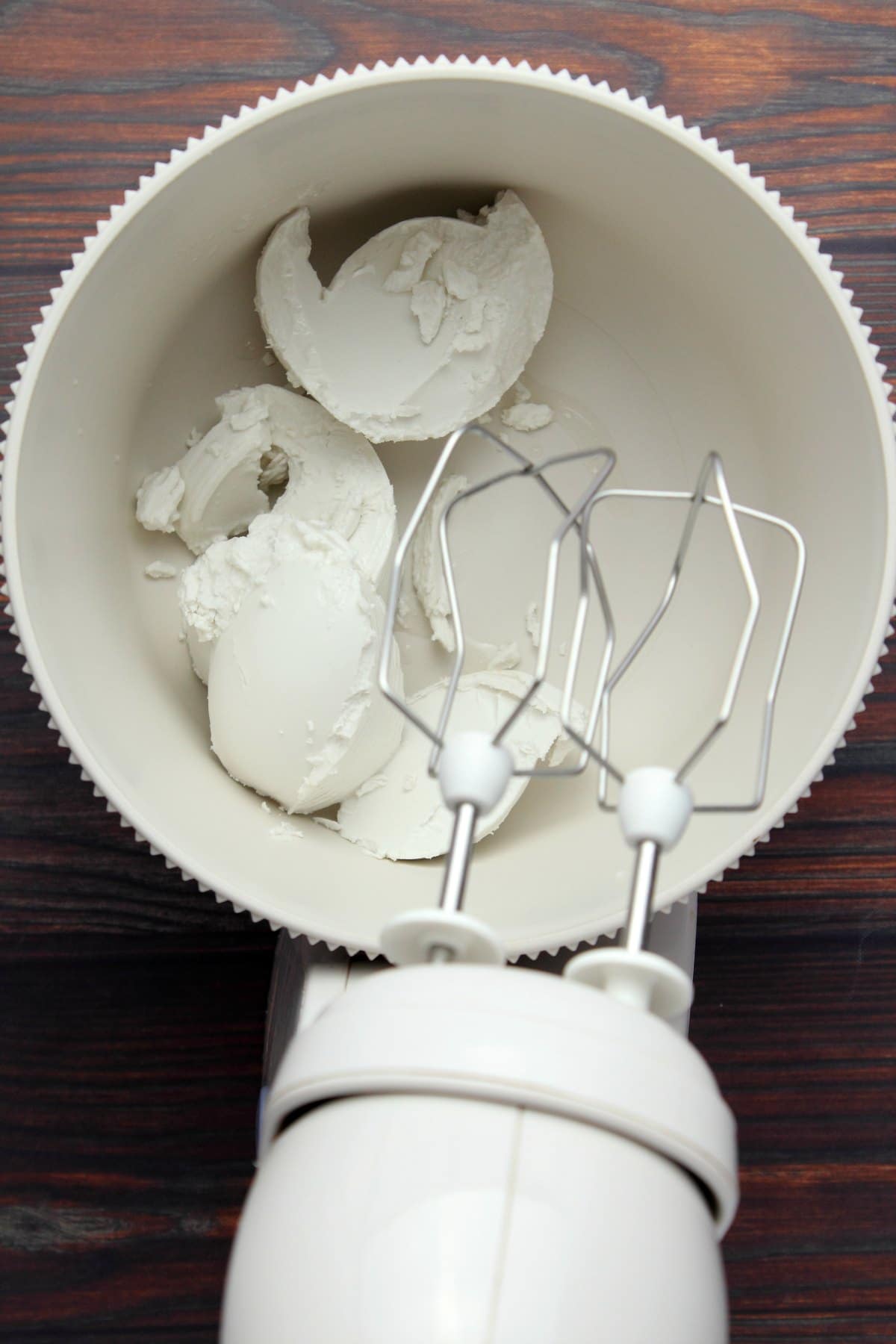 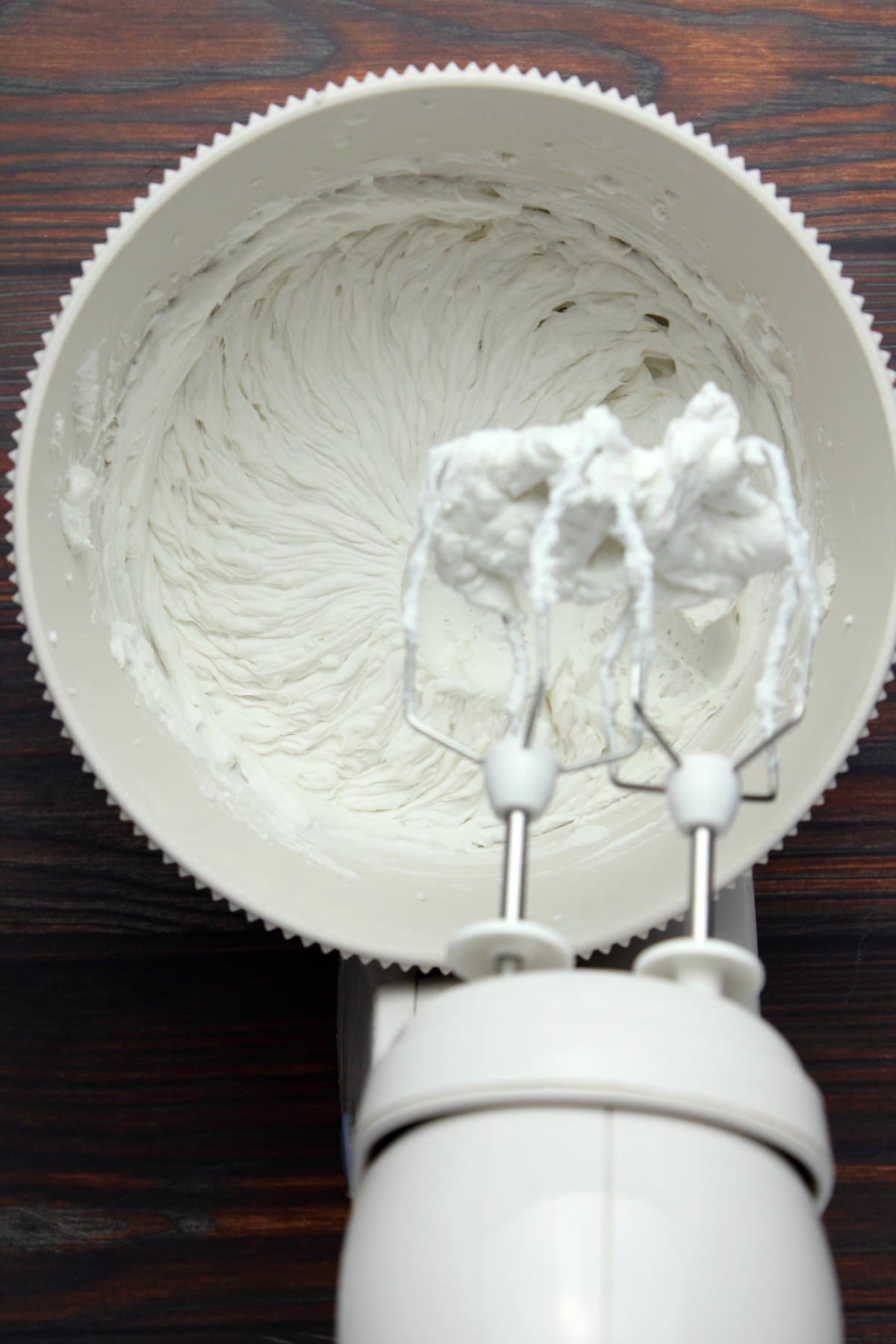 Once scooped into your electric mixer, start off on slow speed and then gradually increase speed until you have a nice thick whipped cream consistency. 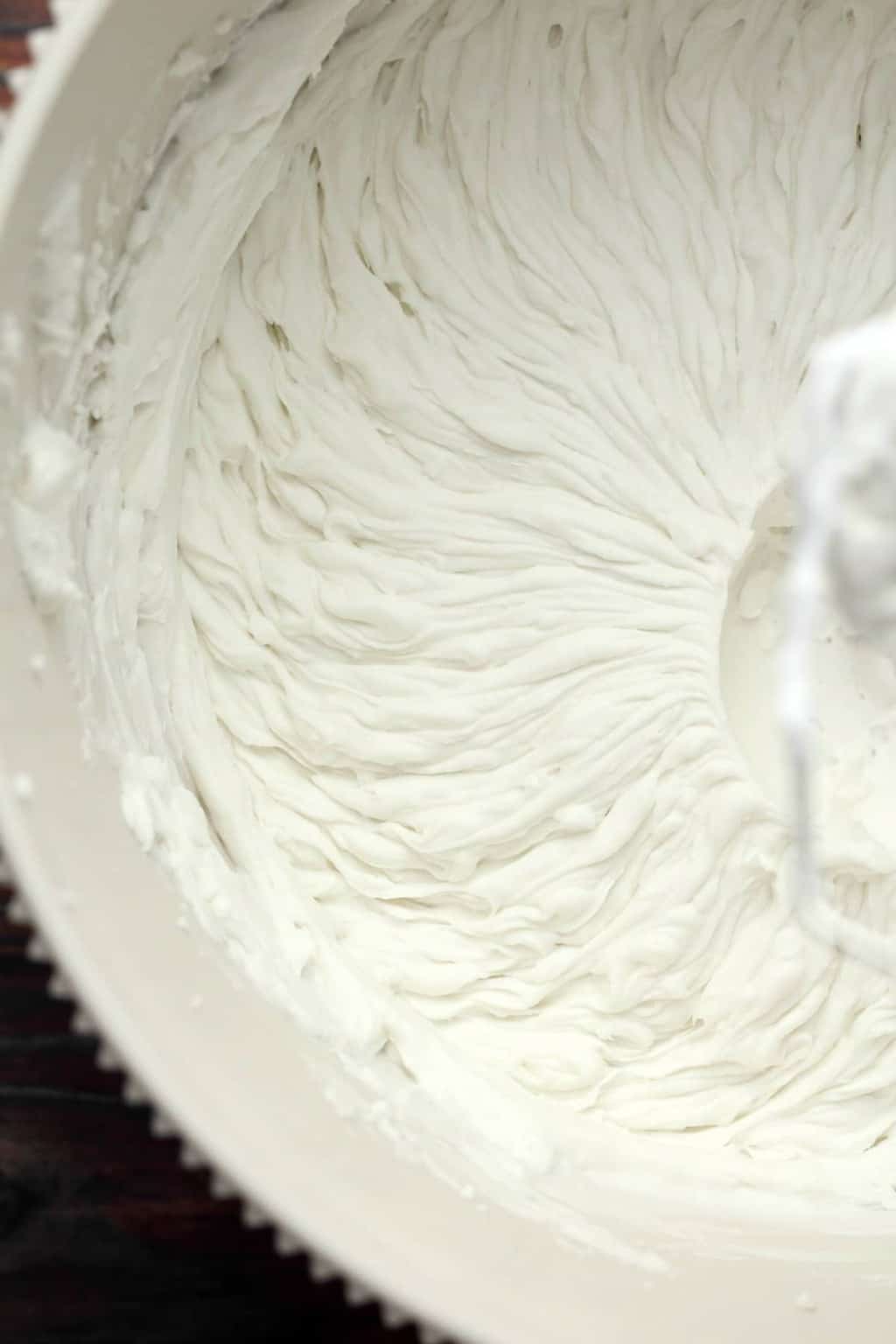 Some brands of coconut cream can over-whip if you go too long and start to separate. If your cream is quite thick to start off with, you might not need to whip it for long at all, as with the batch you see pictured above.

If your cream is very floppy and barely firm at all when it separates from the water in the can, then it might not whip well at all. In this case, whip it for a longer time to see how firm you can get it, and once you’ve got it as firm as possible, you can add in 1/4 – 1/2 tsp xantham gum and whip that in, it will thicken it up fast and can save it from being a dud batch.

Experiment with different brands until you find a good one. Unfortunately sometimes you find a great one and then the manufacturers change the formula slightly and then it doesn’t work so great anymore (happened to me recently!).

Some brands just don’t work well at all. Some might look like they’re going to work but then when you try and whip them, they start to separate and look all grainy. Experiment until you find a brand that works great for you.

Coconut creams in a carton won’t work for this at all.

Another option you have if you can’t be bothered with experimenting to find a good brand to use is just to get some coconut whipping cream. It also needs to be chilled before it will work, but it works great every time! 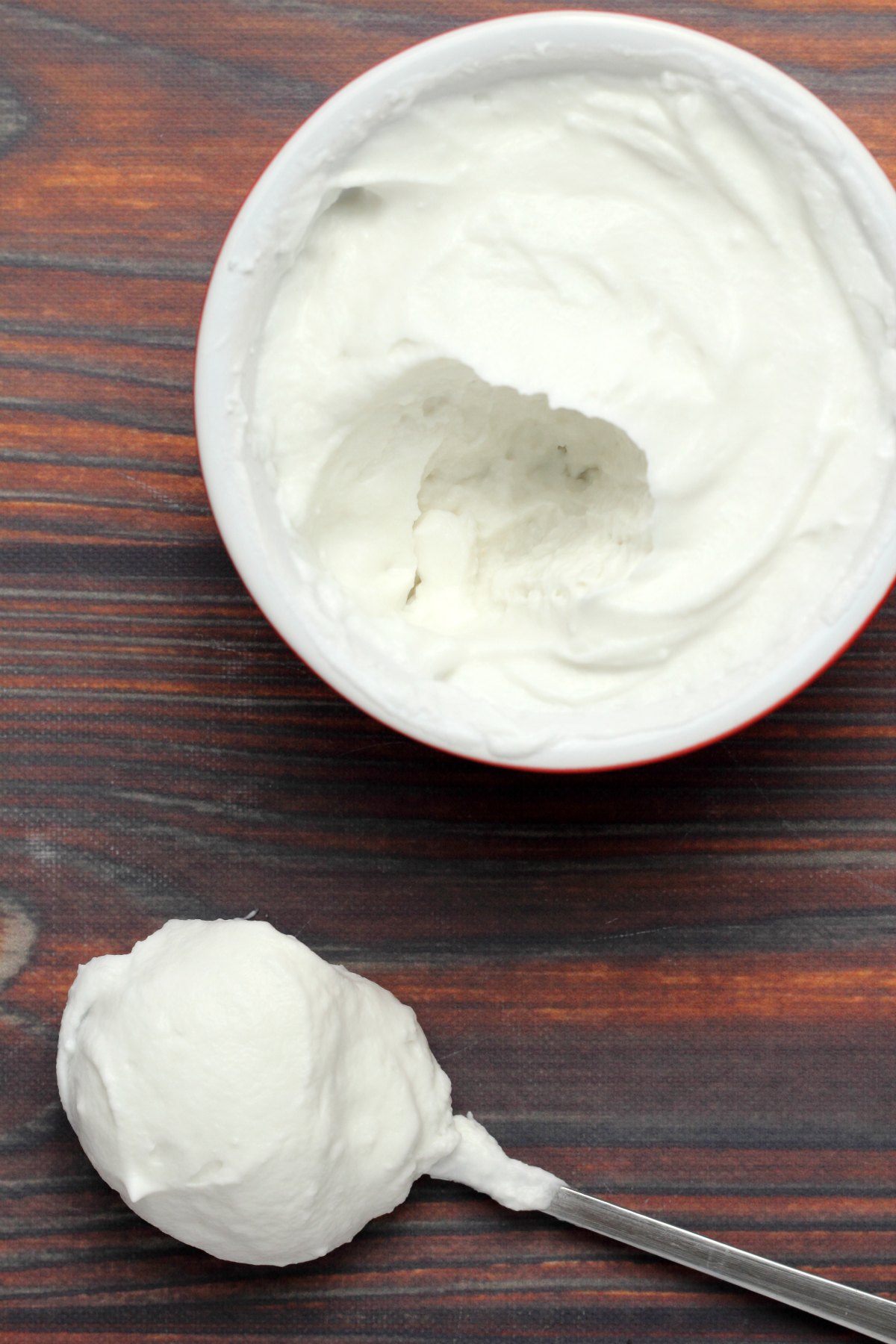 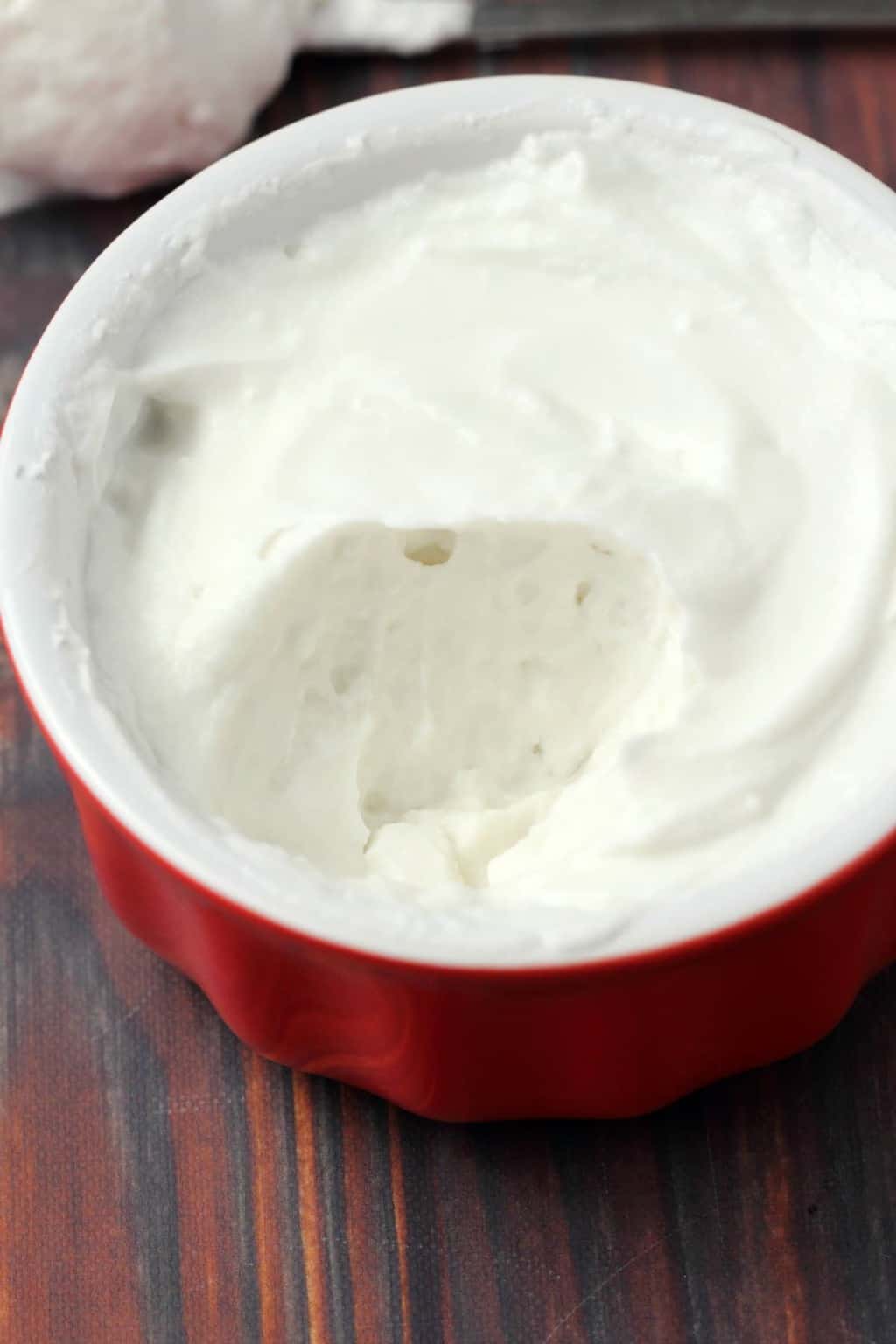 This delicious coconut whipped cream is divine on:

Keep leftovers in the fridge where it will stay good for a few days and even up to a week. 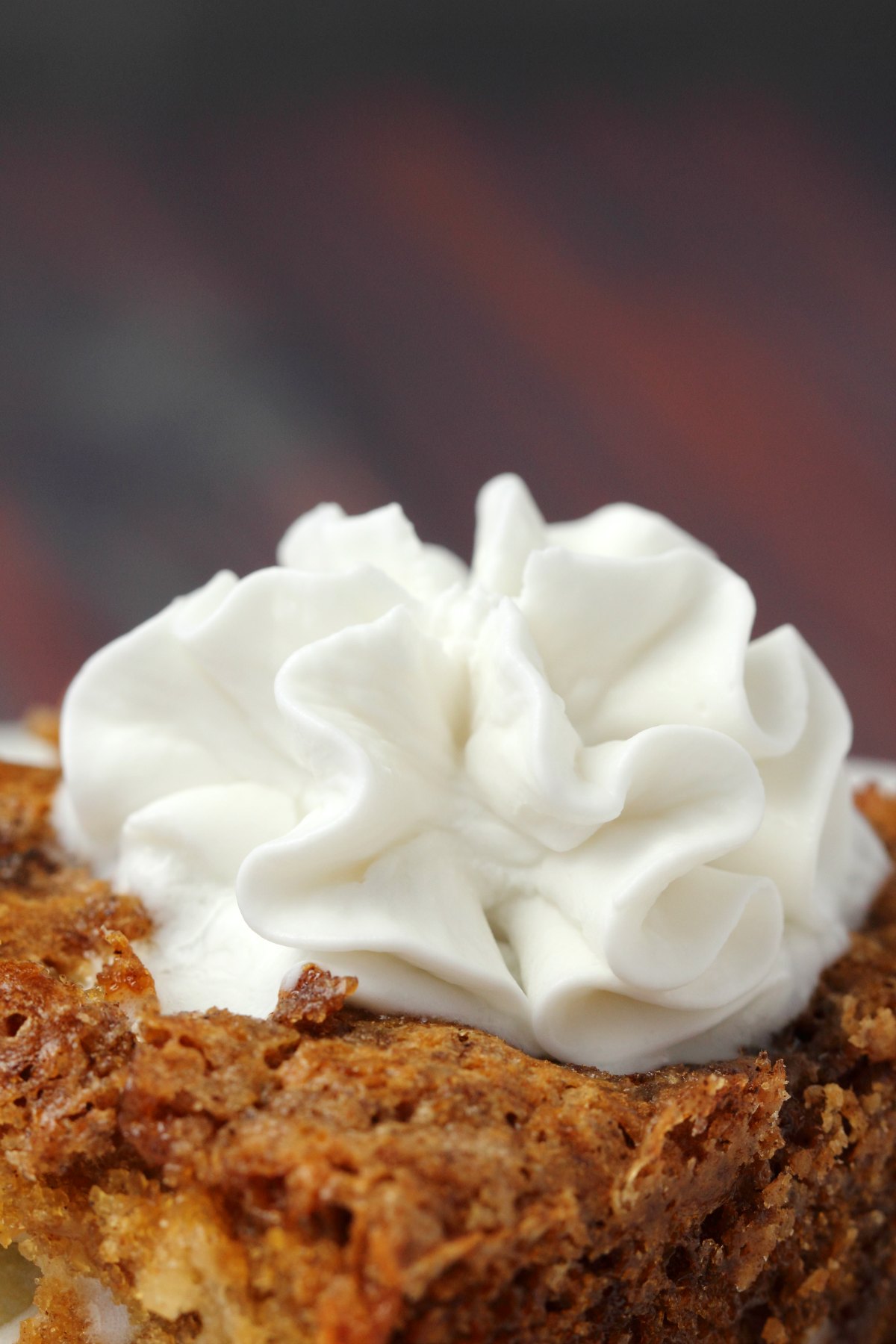 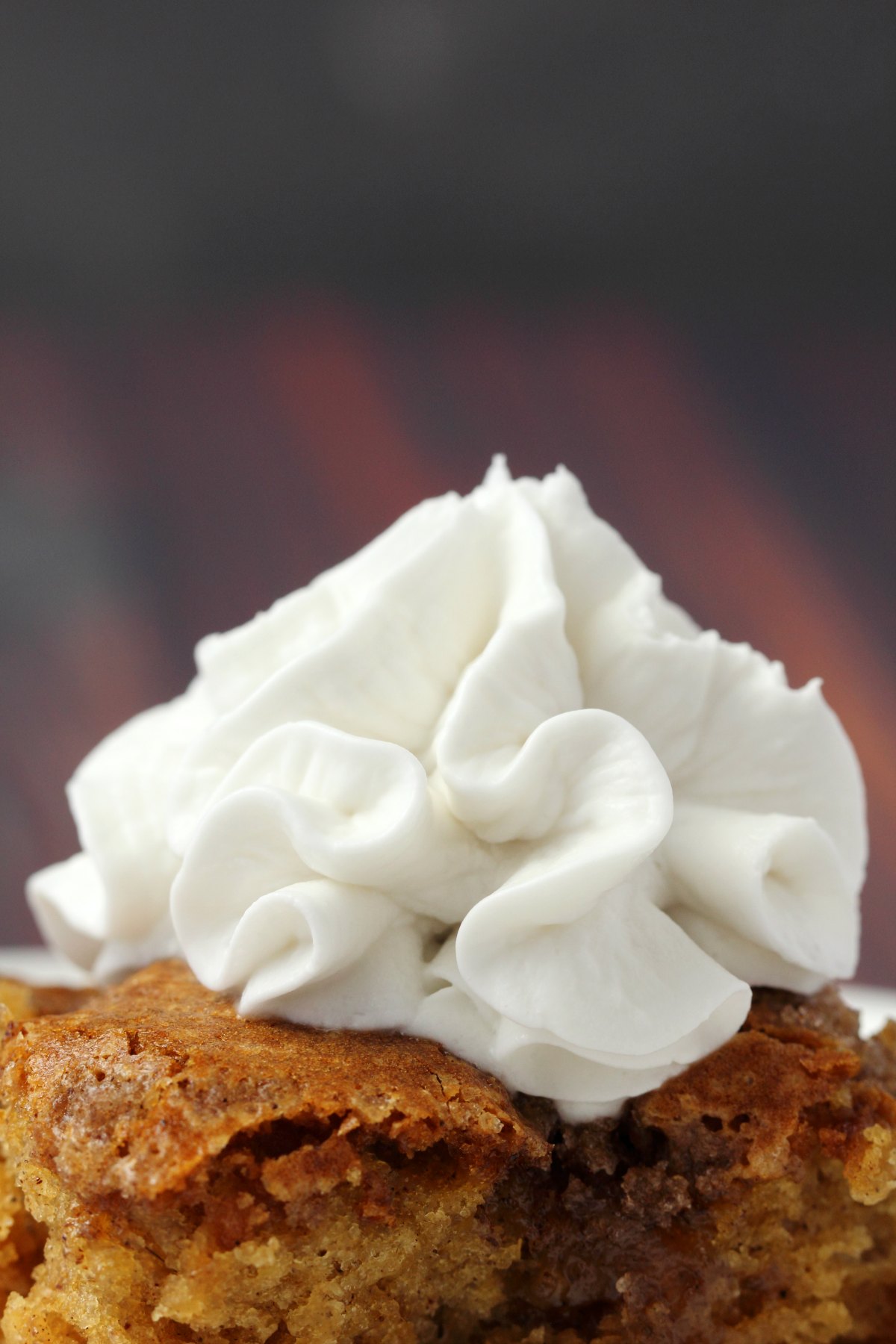 Making your own vegan whipped cream is one of the most essential skills in vegan desserts!

Vegan whipped coconut cream can be piped onto cakes, cupcakes or vegan pies. As you can see I’ve demonstrated a couple of different types of piping nozzles to show you how it can look on top of a delicious apple cake. 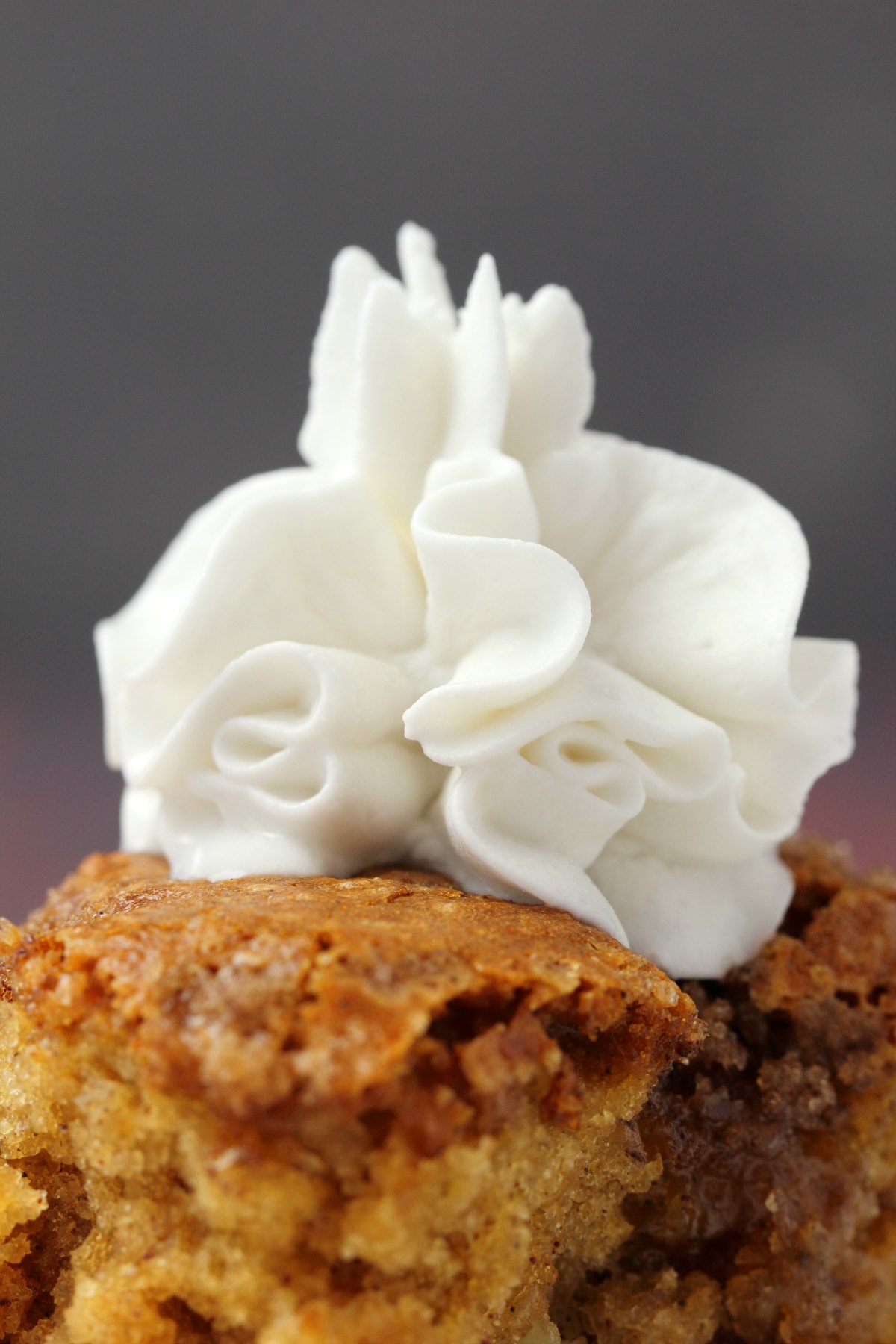 Once you’ve cracked it and know how to make your own delicious vegan whipped cream, you’ll be like me and just have cans of coconut cream permanently in the refrigerator ready to go!

Let us know what you think of this recipe in the comments and please rate it too! Thank you!

Sign up to our email list while you’re here, you’ll get an awesome (and free) recipe ebook with 10 delicious vegan dinner recipes and you’ll be the first to know when new recipes are posted to the blog. 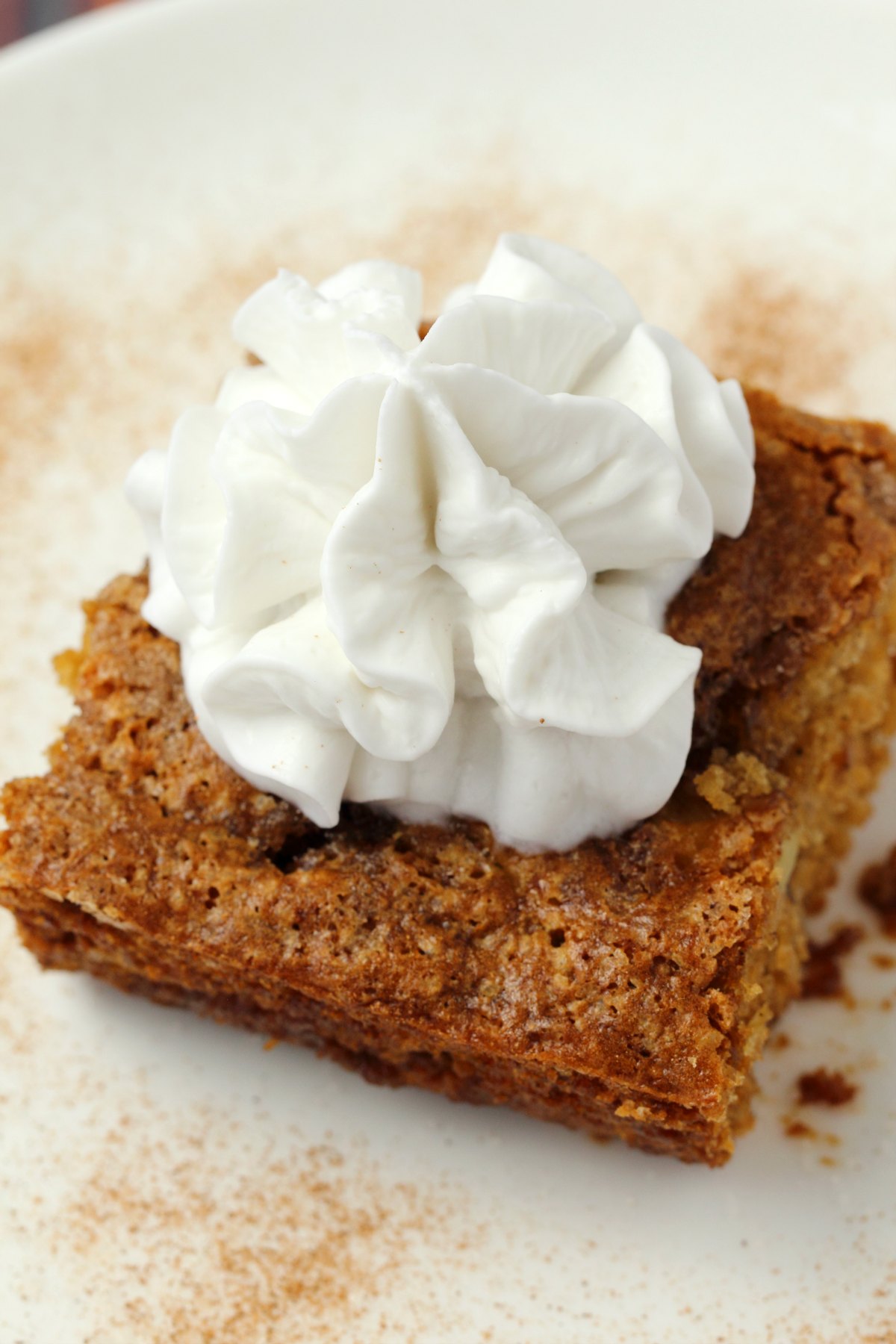 *This is not my original recipe, it’s a staple recipe in vegan baking that I’ve adapted for my own purposes.

*I have heard of cases where the coconut cream and water doesn’t separate, this would mean you got a dud can. It has never happened to me, and I believe it’s rare! But for this reason, have a back up can in the refrigerator – you can always use the dud for making a creamy sauce.

*The best results come about in this recipe when the cream is very firm to start off with. If your cream is floppier when you start, you’ll have to whip it for longer, and even then, it might not reach your desired firmness. If you need a ‘fix’ for a batch that won’t firm up enough, you can add 1/4 tsp of xanthum gum, just be careful because this can sometimes firm it up more than you want it to! But this works as a fix.

*I’ve done it with a hand whisk and it is possible, but generally only in cases where the cream is quite firm and hard to start with. Even then it uses a lot of arm power.

*The cake in the photos with the whipped cream on top is our vegan apple cake and the brownies in the recipe video are our simple vegan brownies.

Loving It Vegan is a participant in the Amazon Services LLC Associates Program, an affiliate advertising program designed to provide a means for sites to earn advertising fees by advertising and linking to Amazon.com. This site may contain some of these links to Amazon.com. If you make a purchase through one of those links, Loving It Vegan will receive a small commission from the purchase at no additional cost to you.
Previous Post: « How To Make A Flax Egg
Next Post: How To Make Vegan Buttermilk »