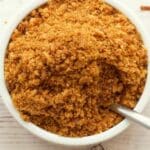 This toasted coconut topping is super easy to make with just 2 ingredients. It makes the best ice cream topping ever.

Toasted coconut is the best thing ever as a topping. For ice creams especially!

But it’s also great with vegan pancakes or vegan crepes.

Sprinkle it on cakes, cupcakes, cookies or just your oatmeal in the morning! It tastes so delicious (and smells so good) you’ll pretty much just want to sprinkle this on everything.

How To Make Toasted Coconut Topping

It’s a cinch to make!

All you do is take a ½ cup of shredded coconut, which is not the dried out crushed version (that would be dessicated coconut), but the moist shredded coconut flakes like you see in the pic below.

And then you gently toast that in the oven for 6-8 minutes until golden brown.

Then you whiz it up in the food processor with ¼ cup of coconut sugar.

Bingo! You have the most delicious smelling house (toasty coconut smells beautiful!) and the most fabulous dessert topping.

Store it in an airtight jar for up to 2 weeks and use it to decorate a vegan coconut cake or sprinkle it on your vegan coconut ice cream (pictured below). 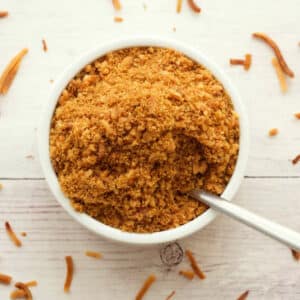 Keep it stored in an airtight jar for up to 2 weeks.