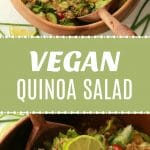 This vegan quinoa salad with a sesame soy dressing is simply bursting with healthy flavor and goodness. Delicious and satisfying. 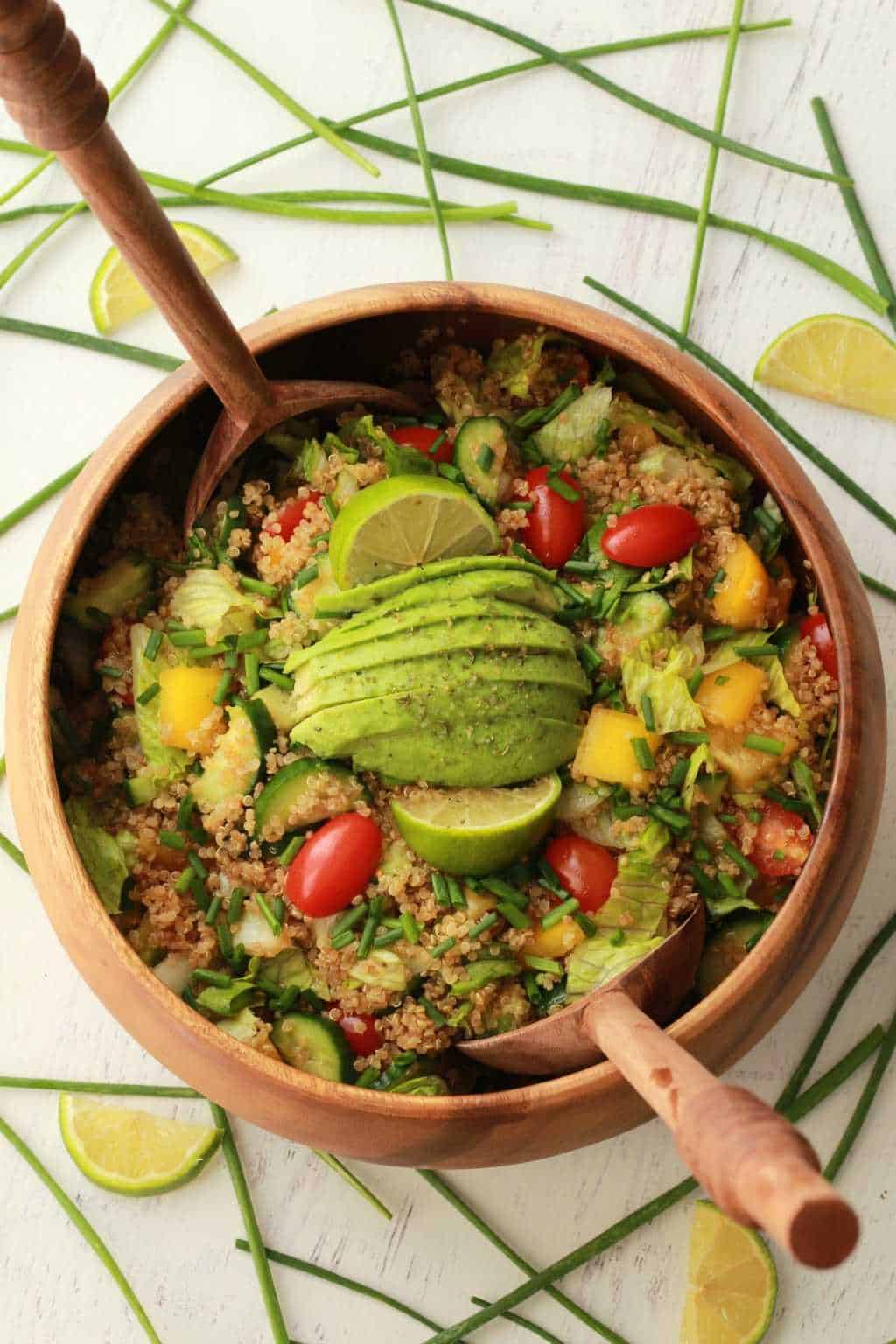 So, quinoa is all the rage because it’s healthy. Even people who prefer not to eat grains love quinoa. Because it’s not a grain, it’s a seed!

It has a crunchy nutty flavor and mixed in with salad and a great dressing it makes the kind of meal to get very excited about.

I was reading this thing once where this personal trainer was going on about how if you tell people they can eat whatever they want then they will just eat pizza all day every day. No one would ever eat a salad.

Well, I took major issue with this because, firstly, who died and made him the arbiter of what others are ‘allowed’ to eat. Secondly, who needs to be given permission to eat whatever they want? You’re an adult, I’m an adult, we actually DO get to eat whatever we want! And then thirdly, what a load of hogwash.

I like pizza as much as the next person – probably more, it’s one of my favorite things (a good vegan pizza is something special!), but I don’t hold it in higher regard than I do salad.

And that’s because I eat salads like this vegan quinoa salad! Salad isn’t a chore or a duty, it’s a joy. I hope it is for you too. And if it’s not (yet) then this salad could be the one to turn it all around for you. 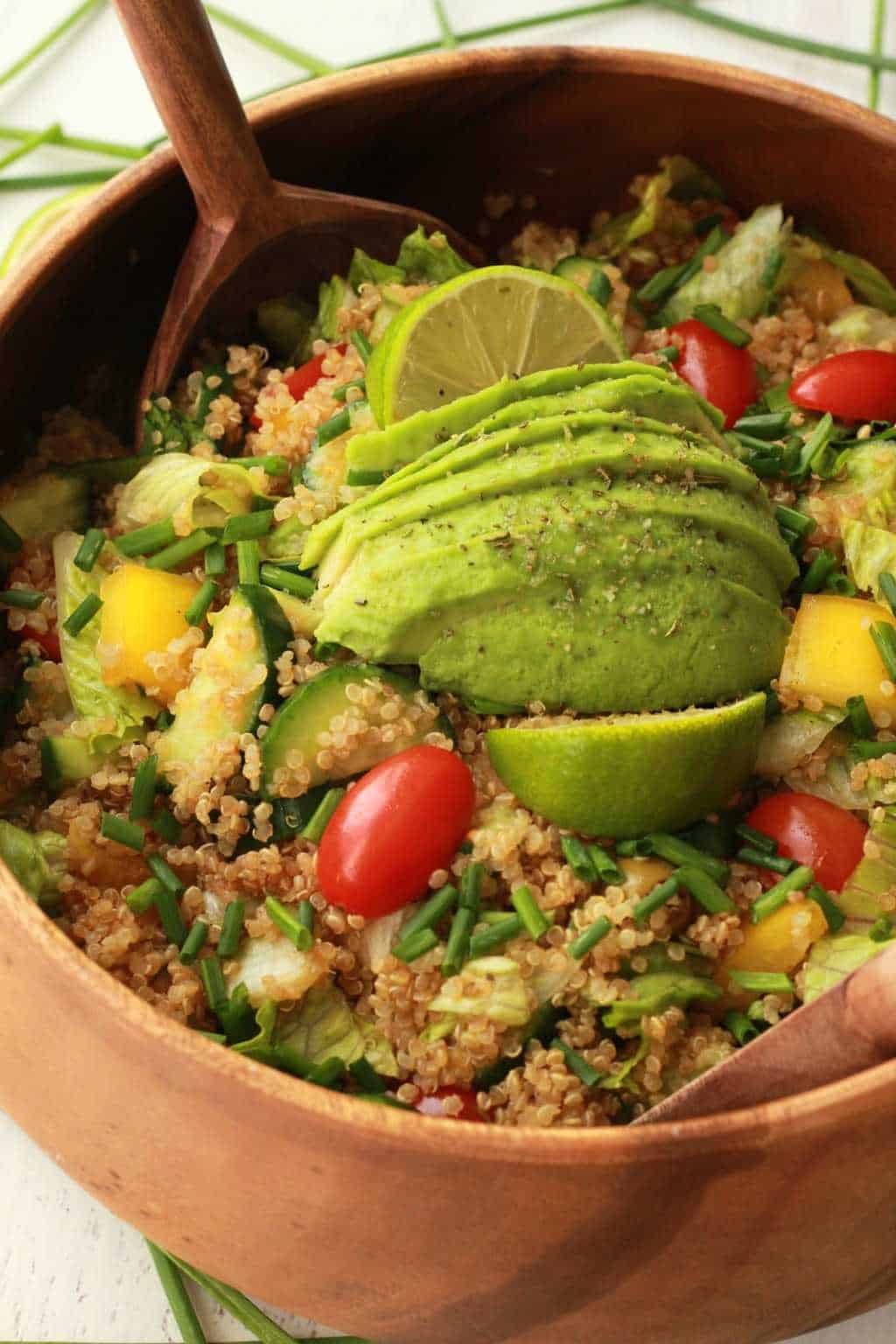 How To Make Vegan Quinoa Salad

When I made my roasted stuffed butternut squash recipe, we stuffed the butternut with a quinoa salad (without lettuce though).

Jaye was so blown away by the quinoa salad alone before we stuffed it inside the butternut that I knew then that I needed to do a standalone recipe for a vegan quinoa salad.

Because yes, it is that good!

So this salad is a simple mix of cooked quinoa with shredded romaine lettuce, sliced cucumbers, sliced olives, cherry tomatoes, yellow bell pepper and avocado with some freshly squeezed lime juice over the top and some chopped chives. 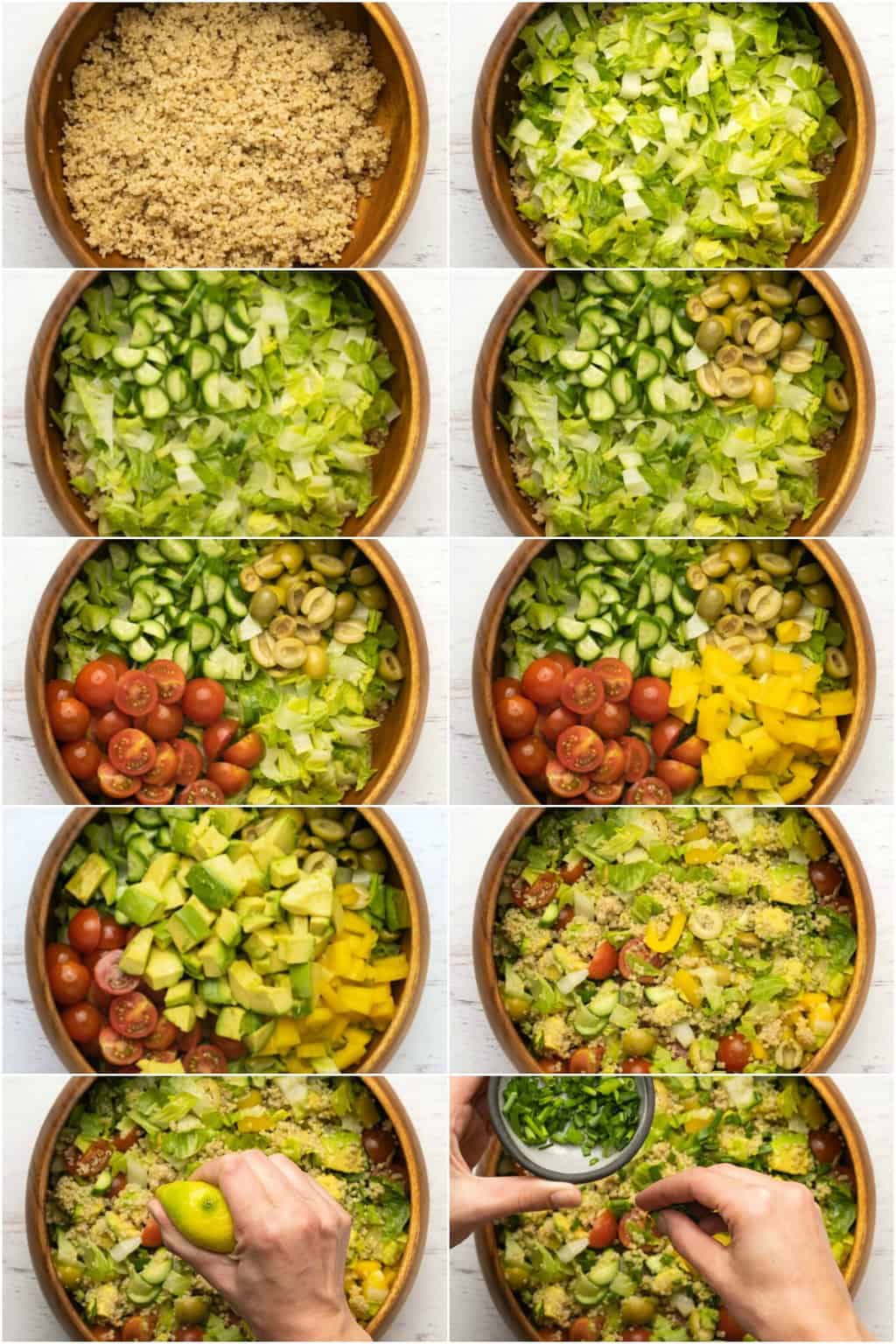 The dressing is also really simple and it’s a mix of sesame oil, soy sauce, maple syrup and crushed garlic. Pour it over the top of the salad, toss it up and then serve with some extra sliced avocado, a sprinkle of oregano and some fresh lime for garnish. 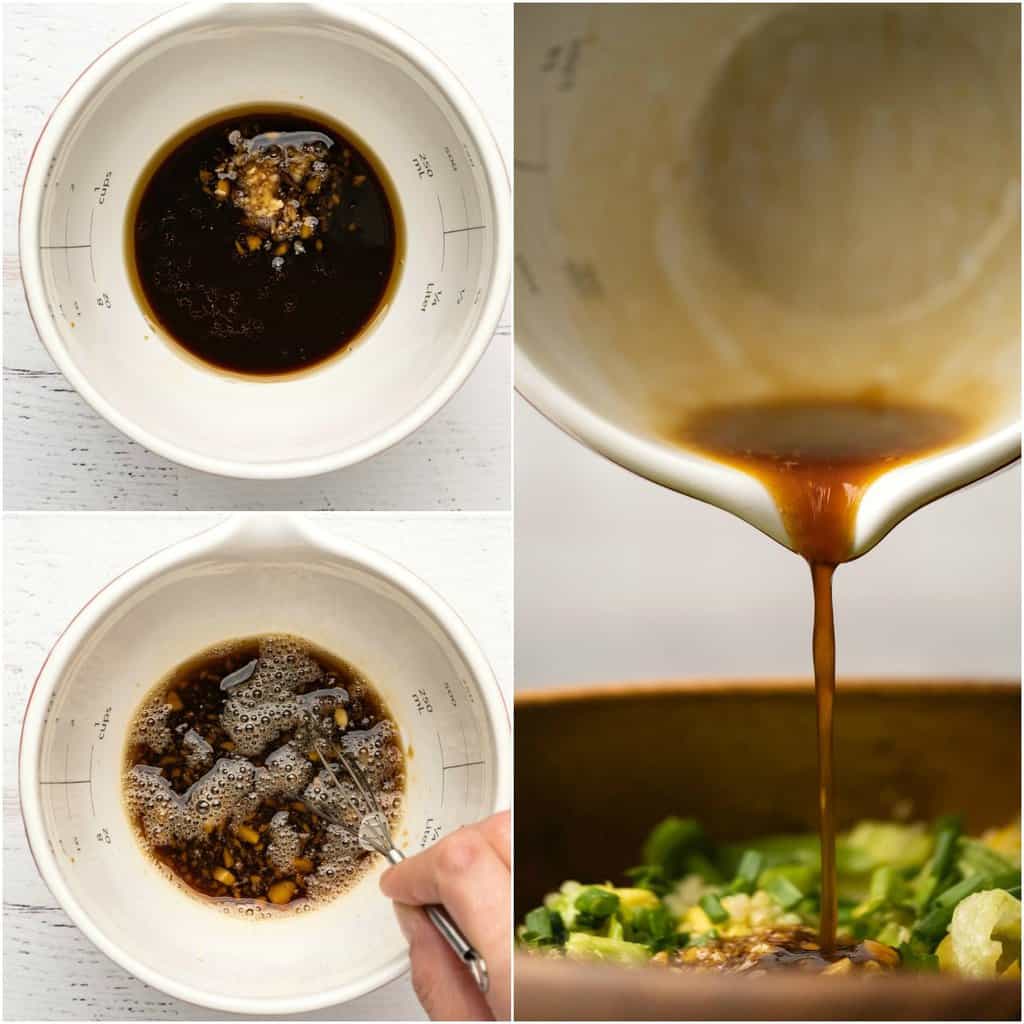 How To Cook Quinoa

This salad uses 3 cups of cooked quinoa and you can really cook it any way you like. My favorite way to cook it though is to add 1 cup (170g) of uncooked quinoa (1 cup uncooked quinoa makes around 3 cups cooked) to a pot with 2 cups (480ml) of water. Bring it to the boil, and then turn down the heat to low, cover the pot and leave it to simmer until most of the water has been absorbed (about 15 minutes) and the quinoa is tender.

Fluff with a fork and your quinoa is ready to go! 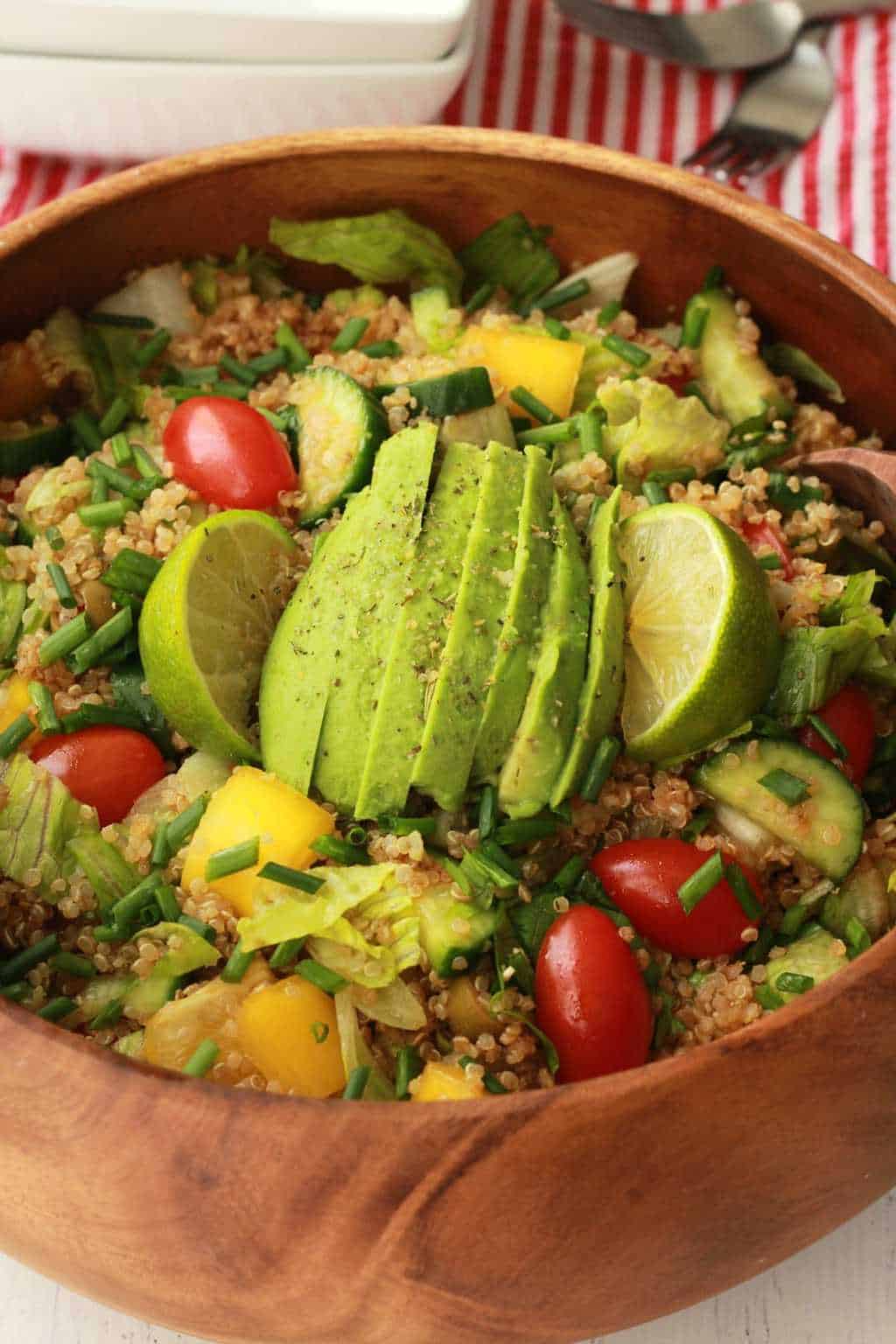 How Long Does This Salad Keep In The Fridge?

As long as the salad and dressing are kept separate (and avocado only added to the portions served) then this can last 2-3 days in the fridge. 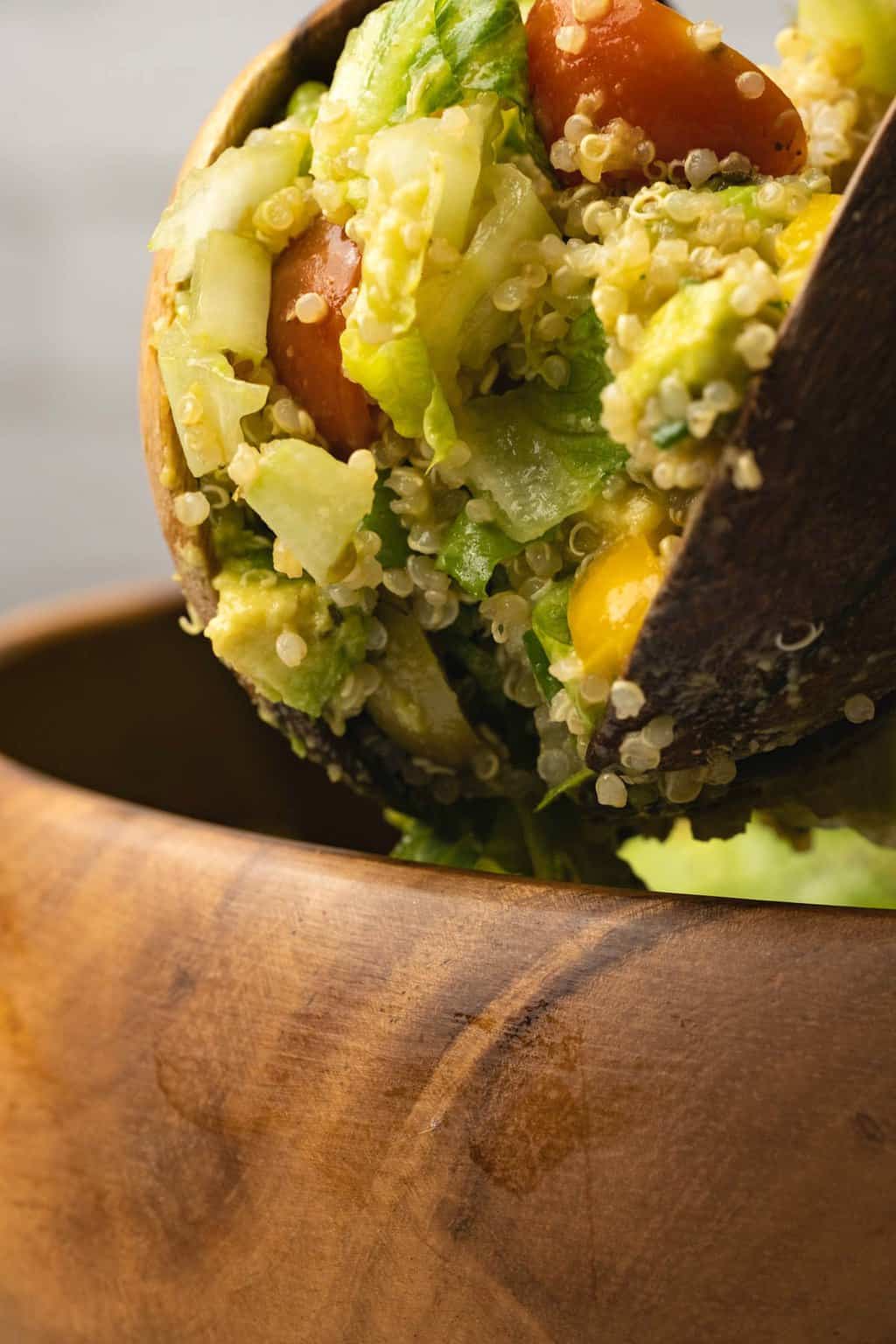 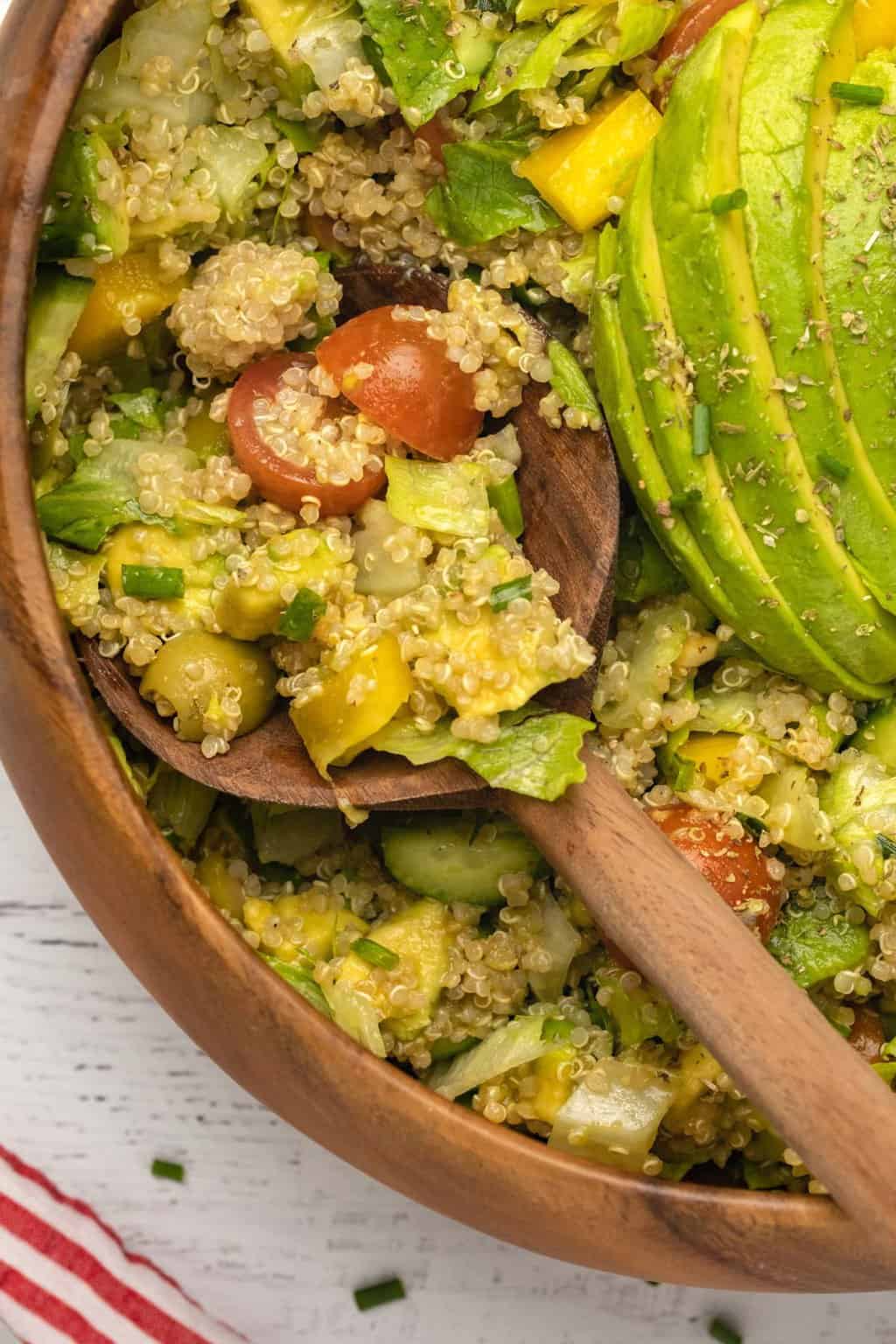 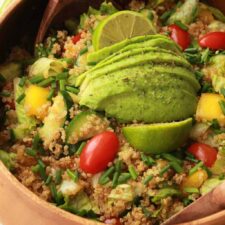 For the Quinoa Salad:

For the Sesame Soy Dressing: