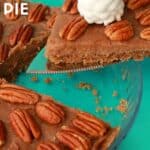 This raw vegan pecan pie is loaded with pecans and pecan flavor, super easy to make and divine served with vegan whipped cream.

When I first thought about making a pecan pie, I had it in mind to do a baked version. But after scouring many recipes online and seeing that what holds a regular version of pecan pie together is syrup and a fair few eggs, I realized that making a baked vegan version wouldn’t be the most straightforward thing I ever did.

So I chickened out and made a raw vegan version instead.

There’s a lot to be said for raw vegan pies! Not only are they delicious, but generally they’re a lot easier too. You don’t have to bake them for one thing, and for another, they’re generally simple in terms of an ingredient list. Well at least they are when I make them.

The crust is a a mix of pecans, walnuts, dessicated coconut and dates, added to the food processor and processed until it starts to clump together. Add to a 9-inch round pie dish and press down to form the crust.

Smooth the filling down on top of the crust.

Add plenty of fresh pecans on top of that.

Serve it with whipped coconut cream.

Keep it stored in the fridge (covered) where it will stay fresh for up to 5 days. 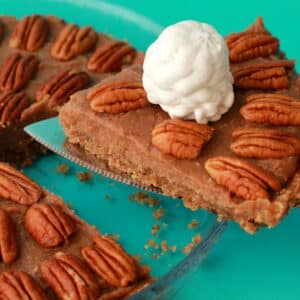