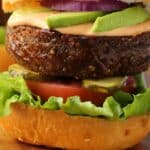 The best vegan burger loaded with flavor and suitable for the grill or stovetop. Hearty and satisfying with a delicious texture.

This vegan burger recipe is seriously the best ever.

My mother and her non-vegan partner were here for a visit while we were testing these burgers on the grill and he was raving about them.

He said they were the best burgers he’s had, and this was from a card carrying carnivore my friends! He was also raving about our vegan nacho cheese, basically he was a happy dude with the food offerings around these parts.

Anyway I have to agree, these vegan burgers are amazing.

They are meaty, but don’t worry you would never mistake them for actual meat. But they are nice and fat, super hearty and filling, with a mix of spices that creates that wonderful BBQ flavor.

We did also baste them with vegan BBQ sauce, so there’s that. But I don’t think that’s cheating.

How To Make Vegan Burgers

We tested them in the pan and on the grill and both ways are super fabulous.

If you’re frying them in the pan then fry them in olive oil – and baste them with a bit of vegan BBQ sauce – and they come out wonderfully.

If you’re grilling them on the barbecue then make sure your grill is oiled a little. This ensures that the grill doesn’t stick to your burgers.

As long as you’ve done that, you can get a perfect grilled vegan burger. And you definitely still want to put on some vegan BBQ sauce.

The texture of these burgers comes from walnuts, chickpeas, couscous and some vital wheat gluten to hold it all together.

I decided to use couscous because it’s so easy to make and cooking the couscous doesn’t add any extra time to making these burgers. While you’re preparing your other ingredients, you just have your couscous soaking in some hot water and then it’s ready!

Whereas if you use something like brown rice or quinoa you are going to have to spend some time cooking it first.

However, if you want to try this vegan burger with brown rice or quinoa you could give it a go. I have not tested it like that though so can’t be sure of the results.

How To Make Couscous

The best way I’ve found to make couscous is just to put equal amounts of couscous and boiling water in a bowl. Cover with a cloth and leave for a few minutes. Then fluff with a fork. Done!

What About Gluten Free?

I don’t know how this vegan burger recipe could be adapted to gluten free, it wasn’t my focus with this recipe as I wanted to use vital wheat gluten because of the great texture it creates.

If you want to experiment then a version with quinoa rather than couscous and gluten-free all purpose flour is probably what I would try as a first go, but just know I haven’t tested it like that and it would be a total experiment.

For other burger recipes that could more easily adapt to gluten-free check out our vegan black bean burgers and vegan chickpea burgers.

If you want to serve your burger with some fries then our baked potato fries are a winner.

A side salad like a vegan Greek salad or vegan chickpea salad would also go great, as would our vegan coleslaw.

We’ve topped our burger with some vegan thousand island dressing but other great options are vegan aioli or vegan yum yum sauce.

Leftovers keep very well in the fridge and can be enjoyed over the next 3-4 days. You can reheat them in the frying pan or in the microwave.

You can freeze them cooked or uncooked for up to 3 months. Let them thaw in the fridge overnight and then reheat, or just cook them directly from frozen. 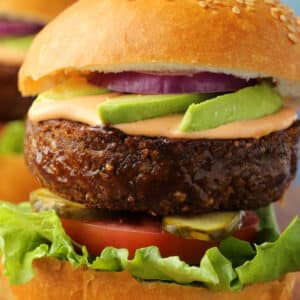