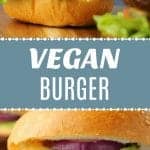 Super hearty vegan burger! Grillable, flavorful and extremely satisfying, this is a burger that vegans and non-vegans alike will enjoy! 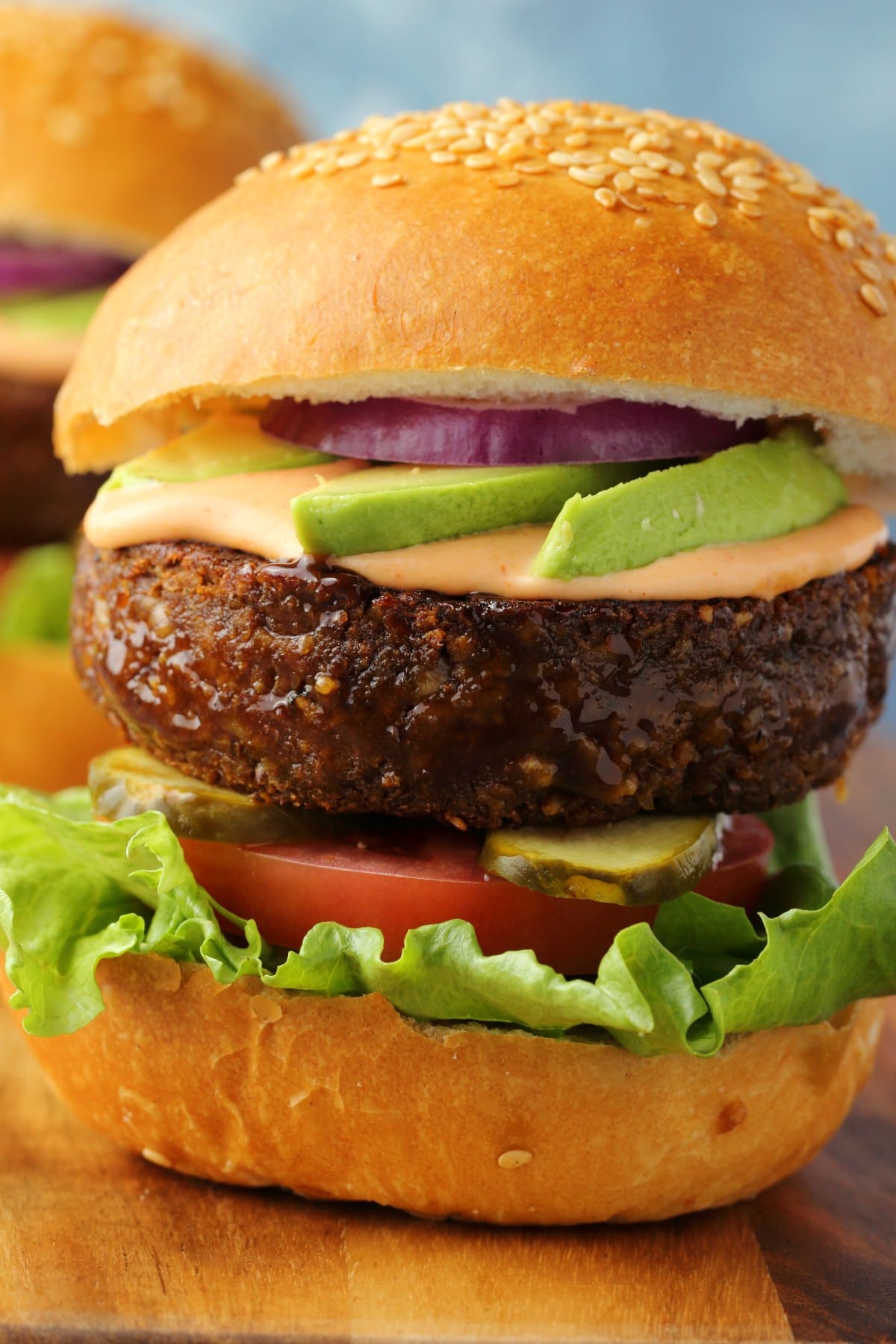 So I think this vegan burger recipe is the best one I’ve made so far.

Not that I’m throwing shade on my other burger recipes, those were damn good too! But this one, oh my, it’s something else!

My mother and her non-vegan partner were here for a visit this past week while we were testing these burgers on the grill (yes they are totally grillable!) and he was raving about them!

He said they were the best burgers he’s had, and this was from a card carrying carnivore my friends! He was also raving about our vegan nacho cheese, basically he was a happy dude with the food offerings around these parts.

I do love getting the validation that our recipes are good from the non-vegan folks so that was awesome. 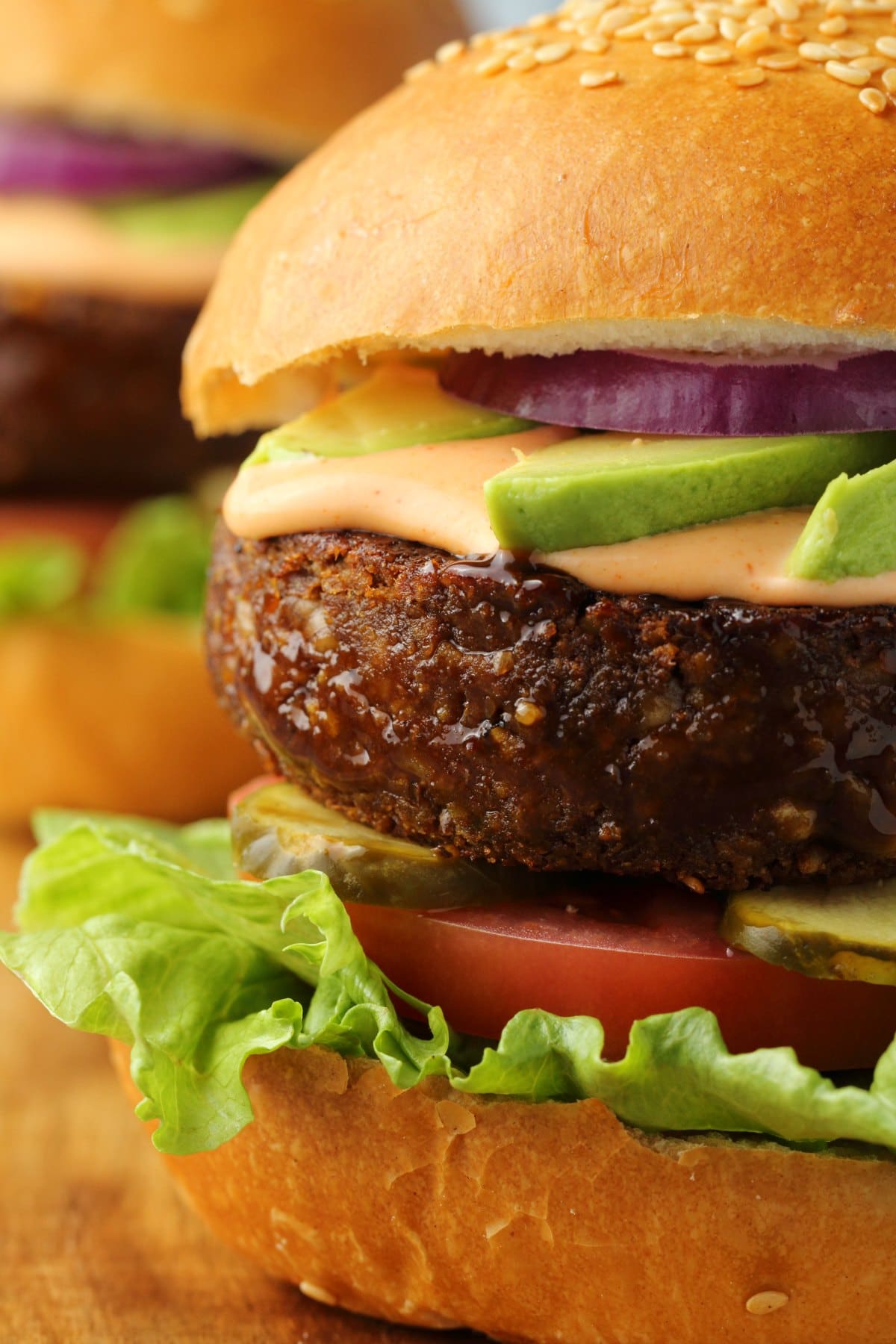 Anyway I have to agree, these vegan burgers are amazing.

They are meaty, but don’t worry you would never mistake them for actual meat. But they are nice and fat, super hearty and filling, with a mix of spices that creates that wonderful barbecue flavor.

We also did baste them with some vegan barbecue sauce, so there’s that. But I don’t think that’s cheating. 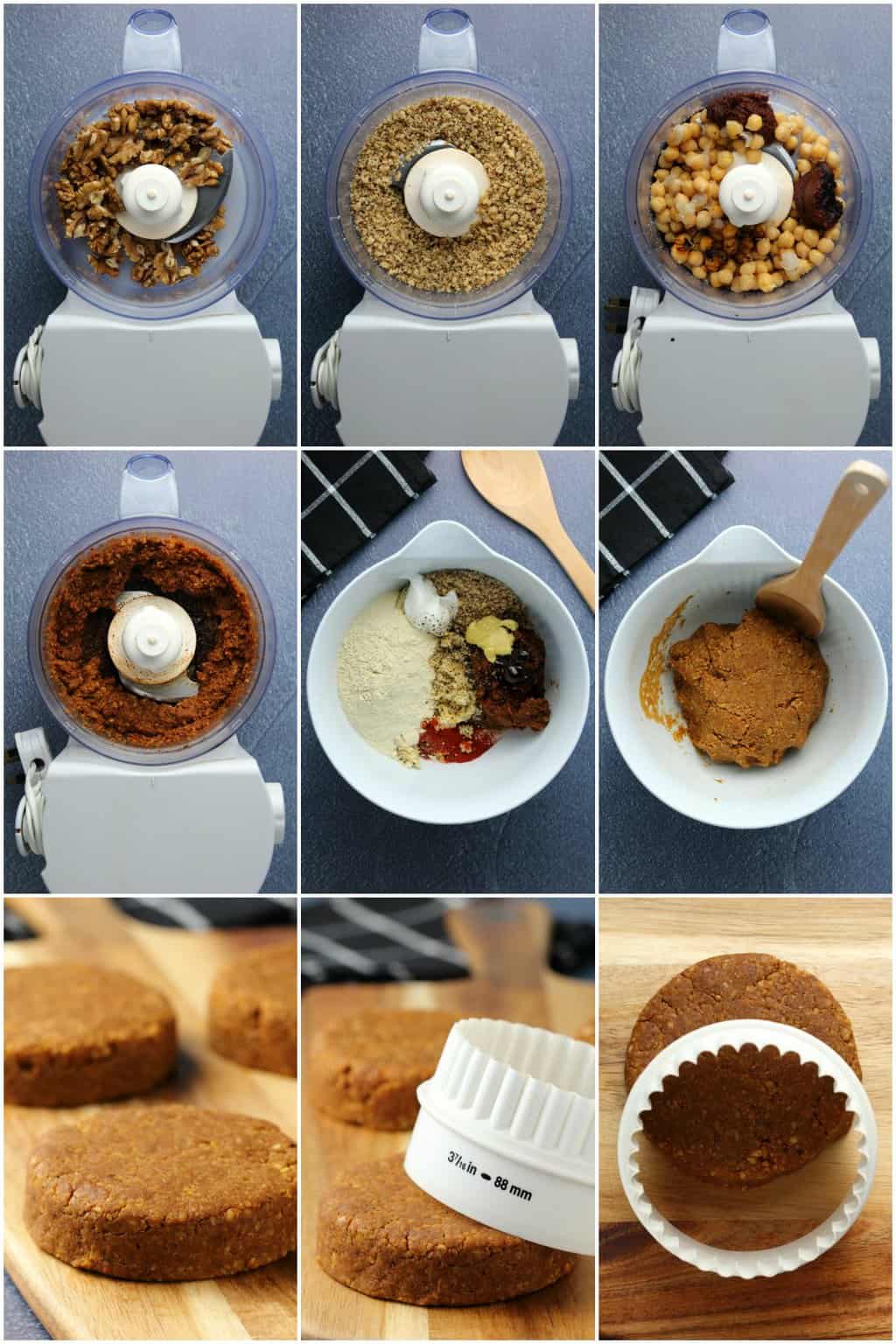 We tested them in the pan and on the grill and both ways are super fabulous.

If you’re frying them in the pan then fry them with some olive oil – and baste them with a bit of vegan barbecue sauce – and they come out wonderfully. 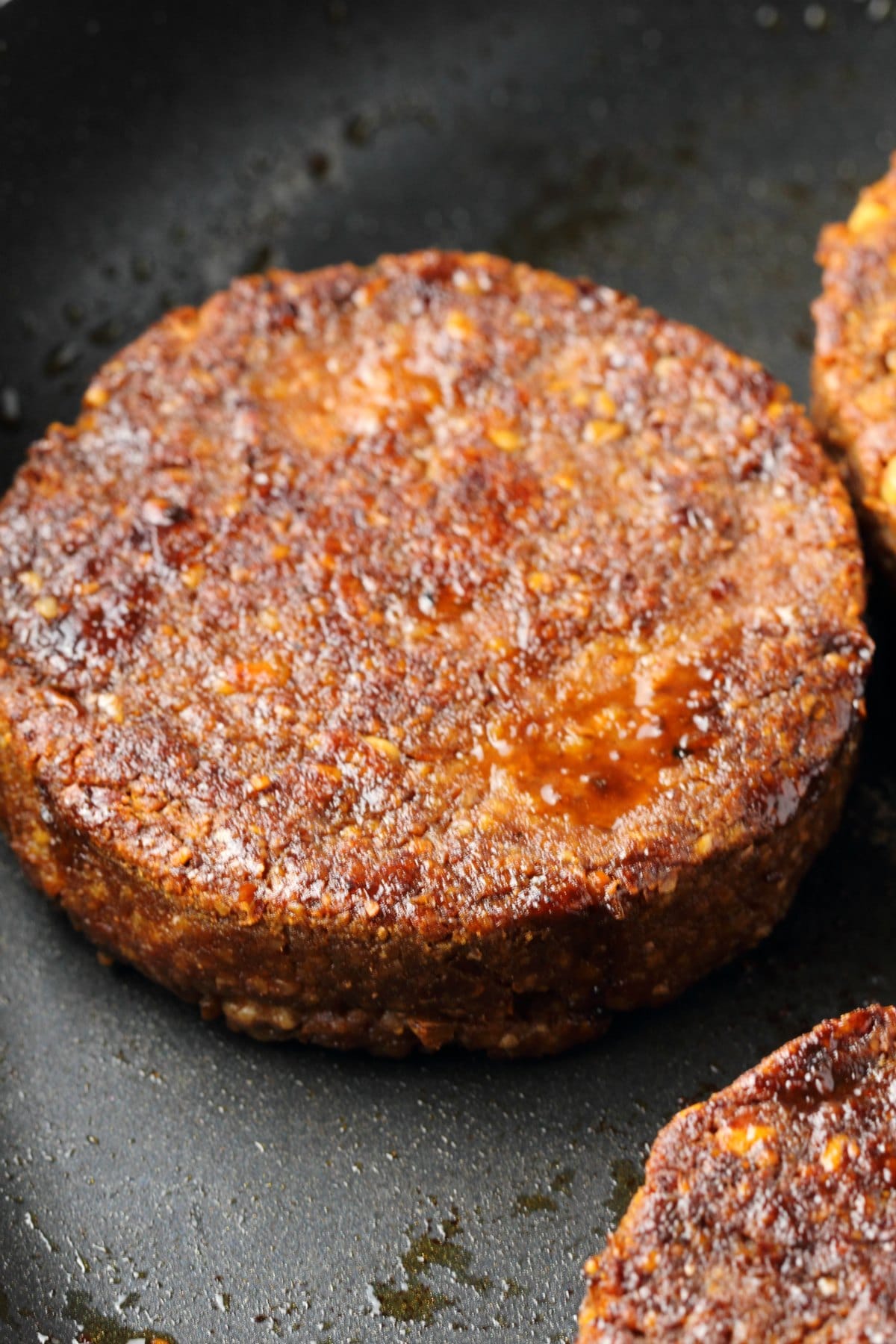 If you’re grilling them on the barbecue then make sure your grill is oiled a little. This ensures that the grill doesn’t stick to your burgers.

As long as you’ve done that, you can get a perfect grilled vegan burger. And you definitely still want to put on some vegan barbecue sauce. ? 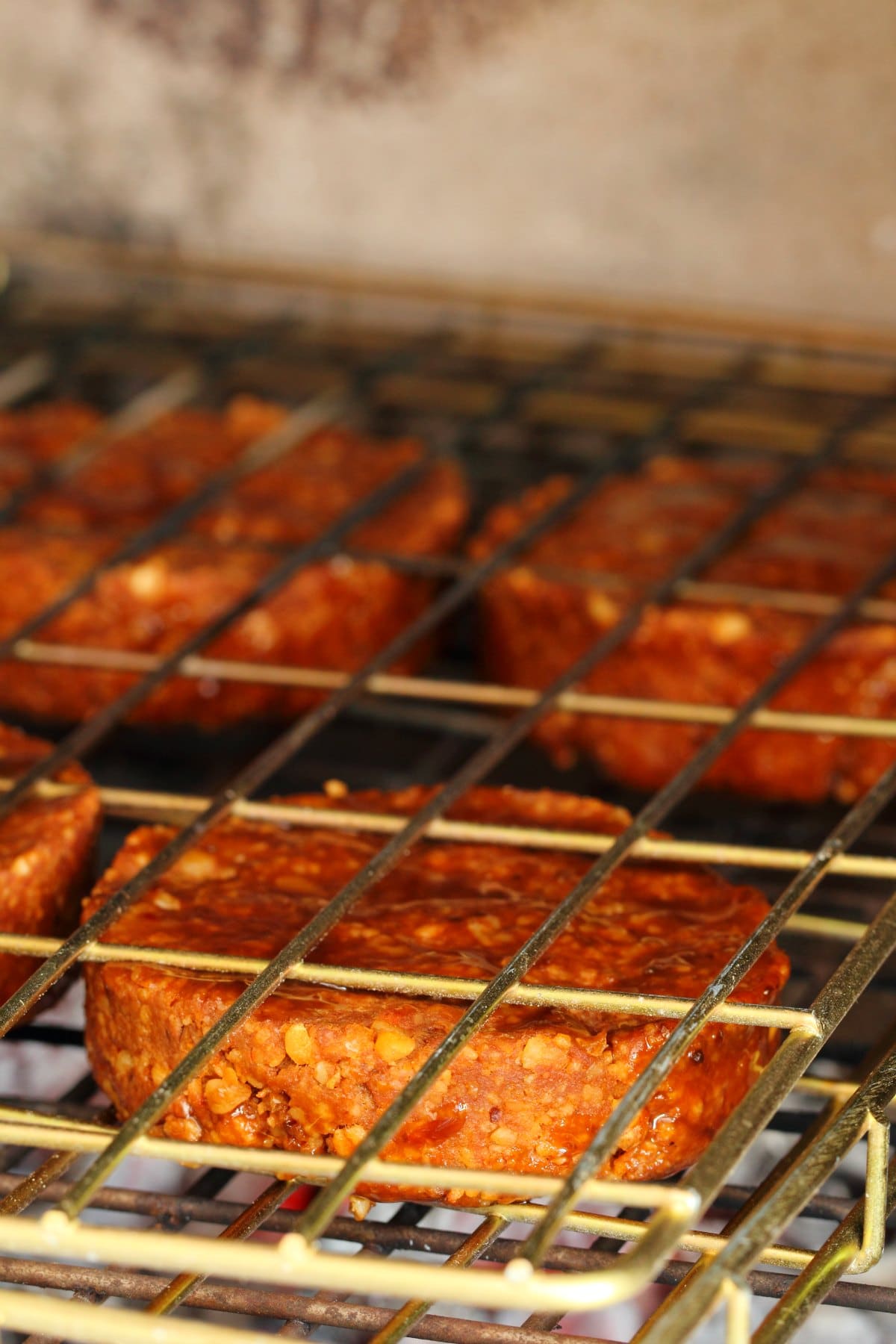 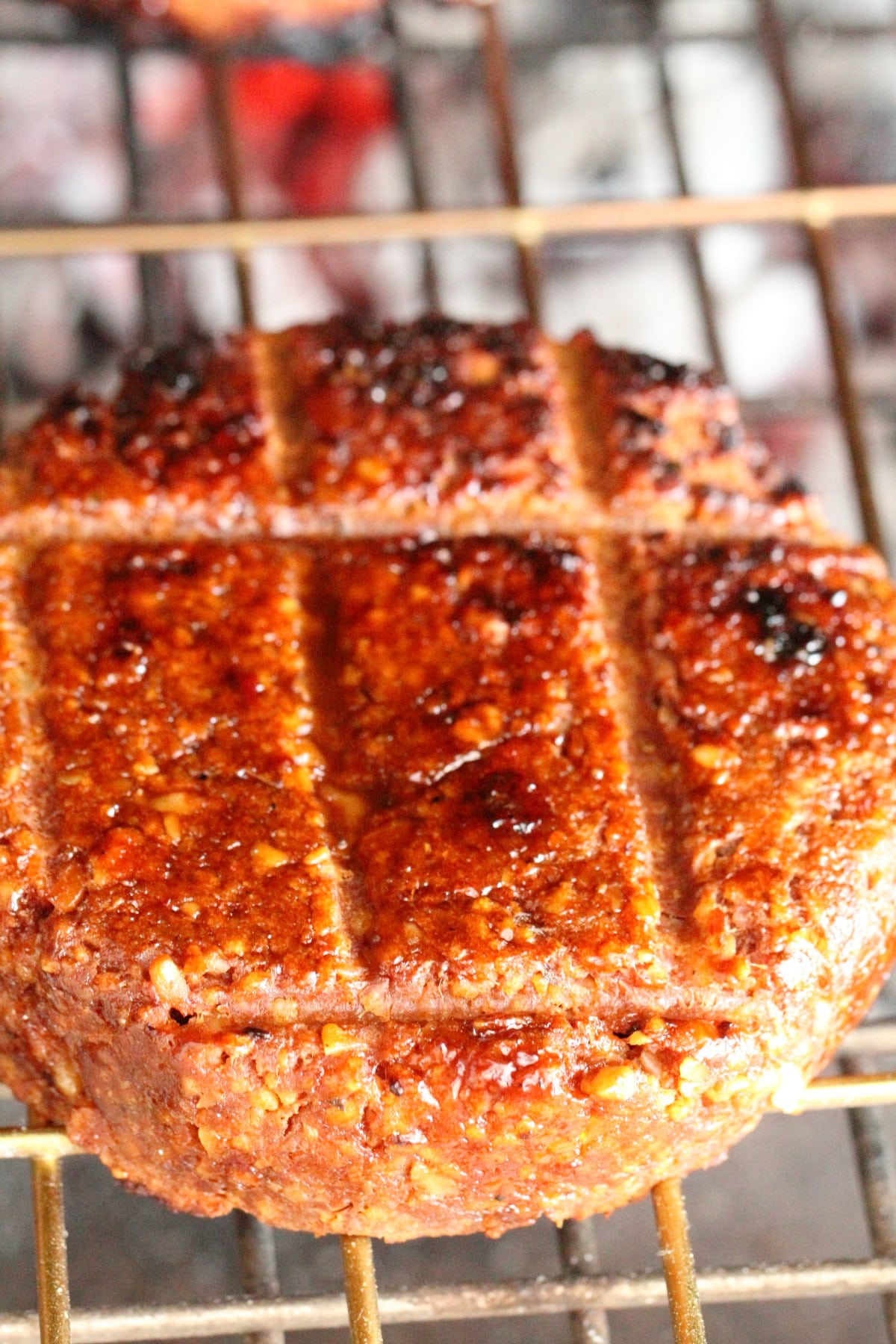 The texture is perfect!

The texture of these burgers comes from walnuts, chickpeas, couscous and some vital wheat gluten to hold it all together.

I decided to use couscous because it’s so easy to make and cooking the couscous doesn’t add any extra time to making these burgers. While you’re preparing your other ingredients, you just have your couscous soaking in some hot water and then it’s ready!

Whereas if you use something like brown rice or quinoa you are going to have to spend some time cooking it first.

The best way I’ve found to make couscous is just to put equal amounts of couscous and boiling water in a bowl. Cover with a cloth and leave for a few minutes. Then fluff with a fork. Done!

However, if you want to try this vegan burger with brown rice or quinoa you could give it a go. I have not tested it like that though so can’t be sure of the results. 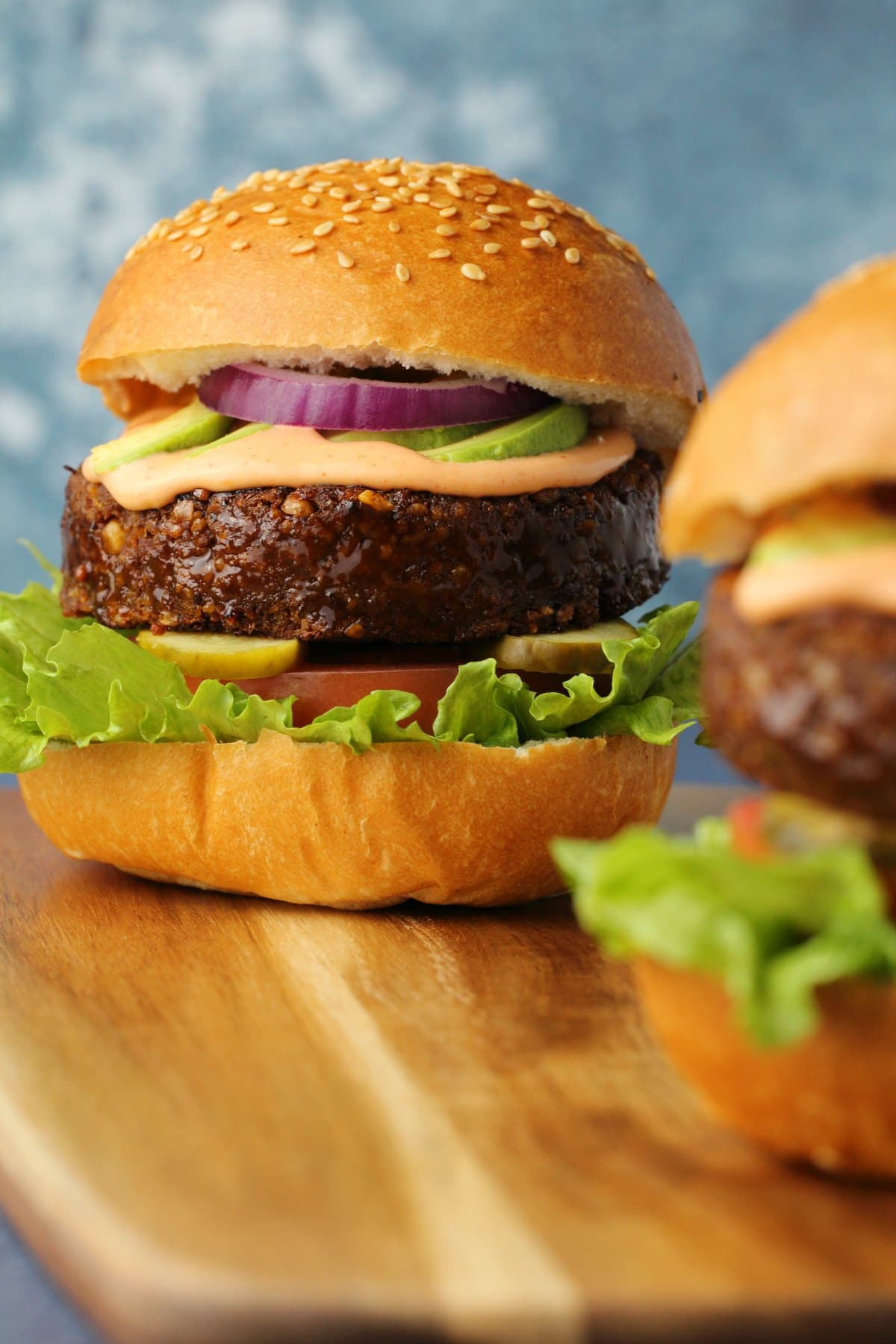 I don’t know how this vegan burger recipe could be adapted to gluten-free, it wasn’t my focus with this recipe as I wanted to use vital wheat gluten because of the great texture it creates.

If you want to experiment then a version with quinoa rather than couscous and gluten-free all purpose flour is probably what I would try as a first go but just know I haven’t tested it like that and it would be a total experiment!

For other burger recipes that could more easily adapt to gluten-free check out our vegan black bean burgers and vegan chickpea burgers. 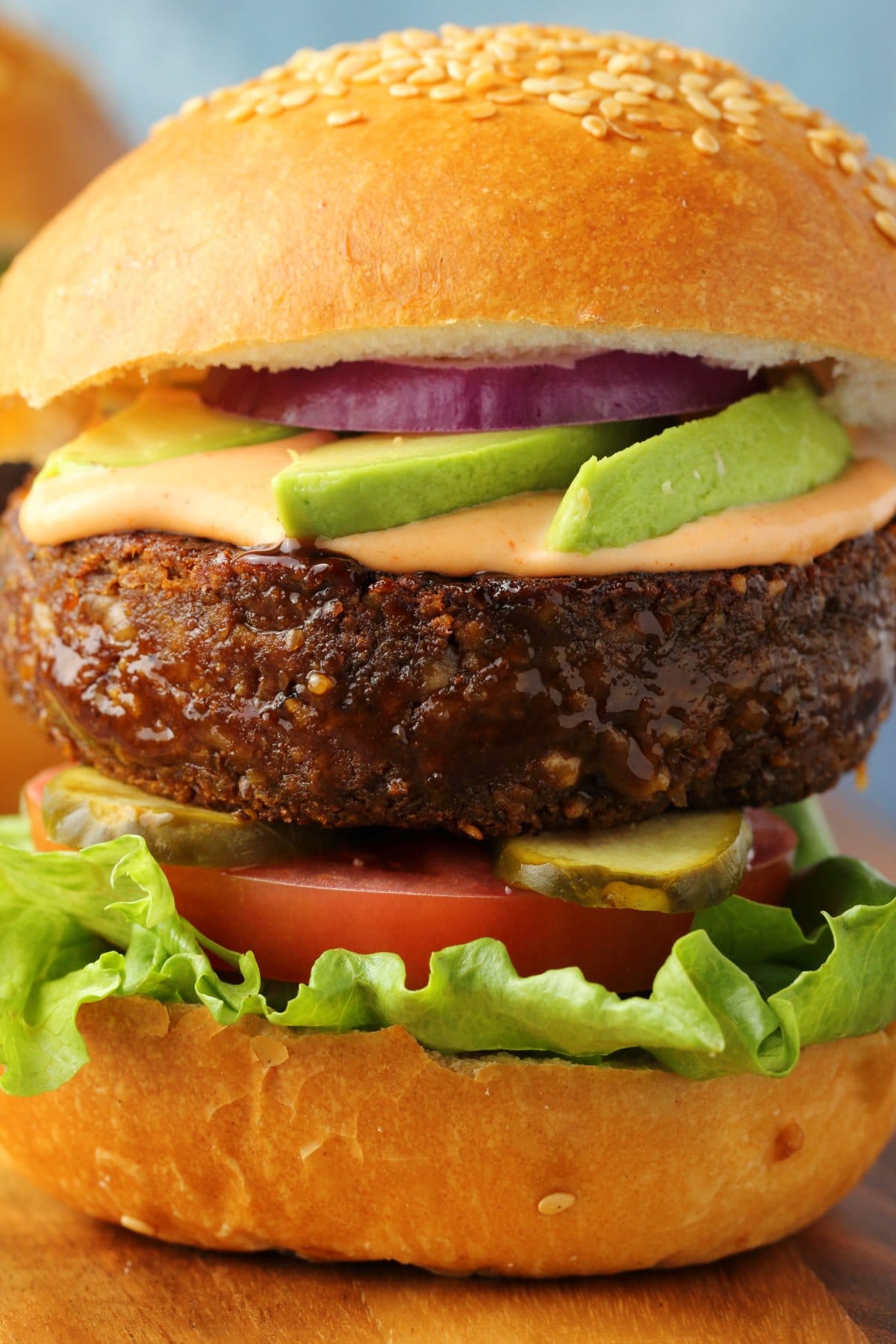 So I think you’re going to really really love this vegan burger, it is:

Leftovers keep very well in the fridge and can be enjoyed over the next couple of days, either reheated or just eaten cold. 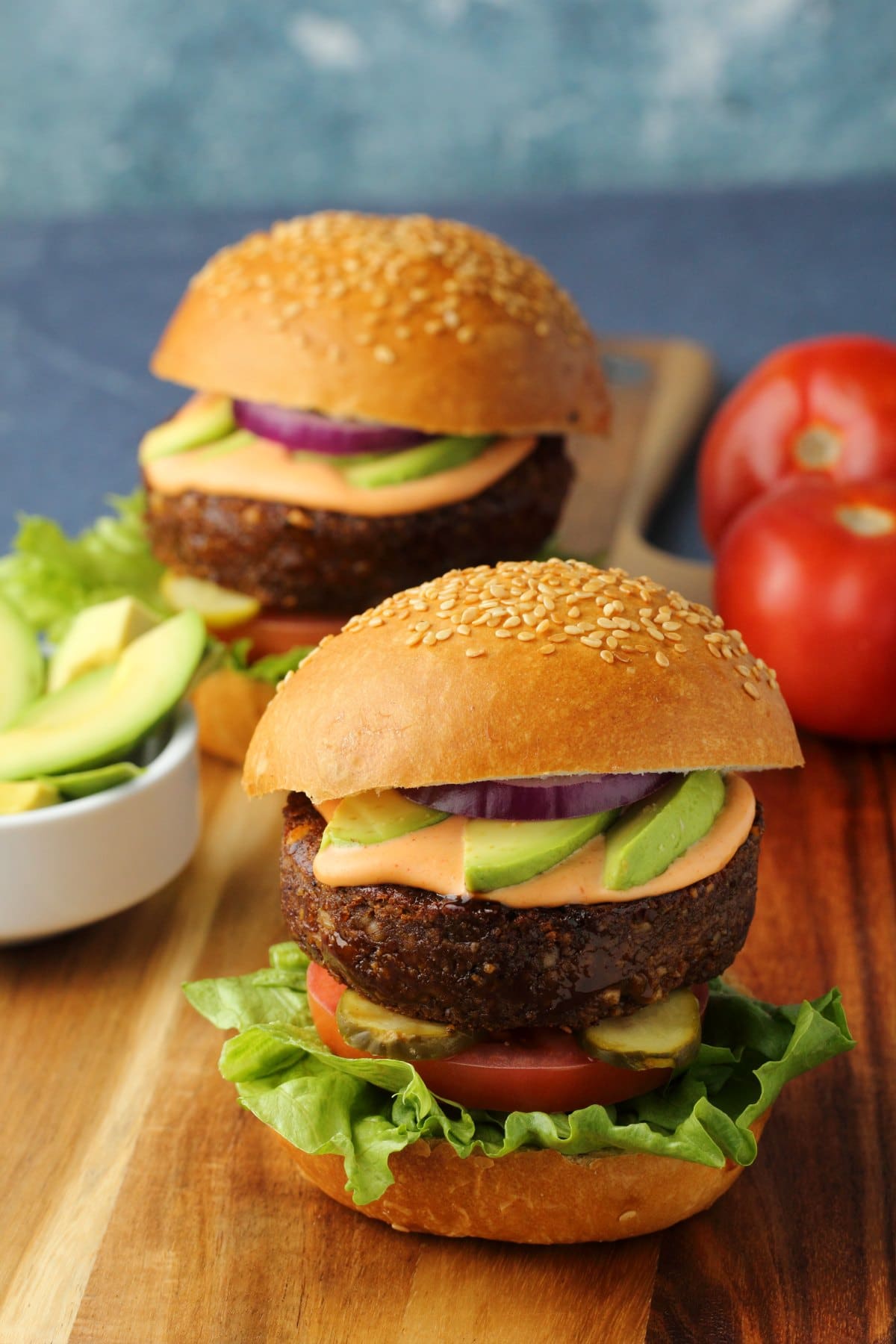 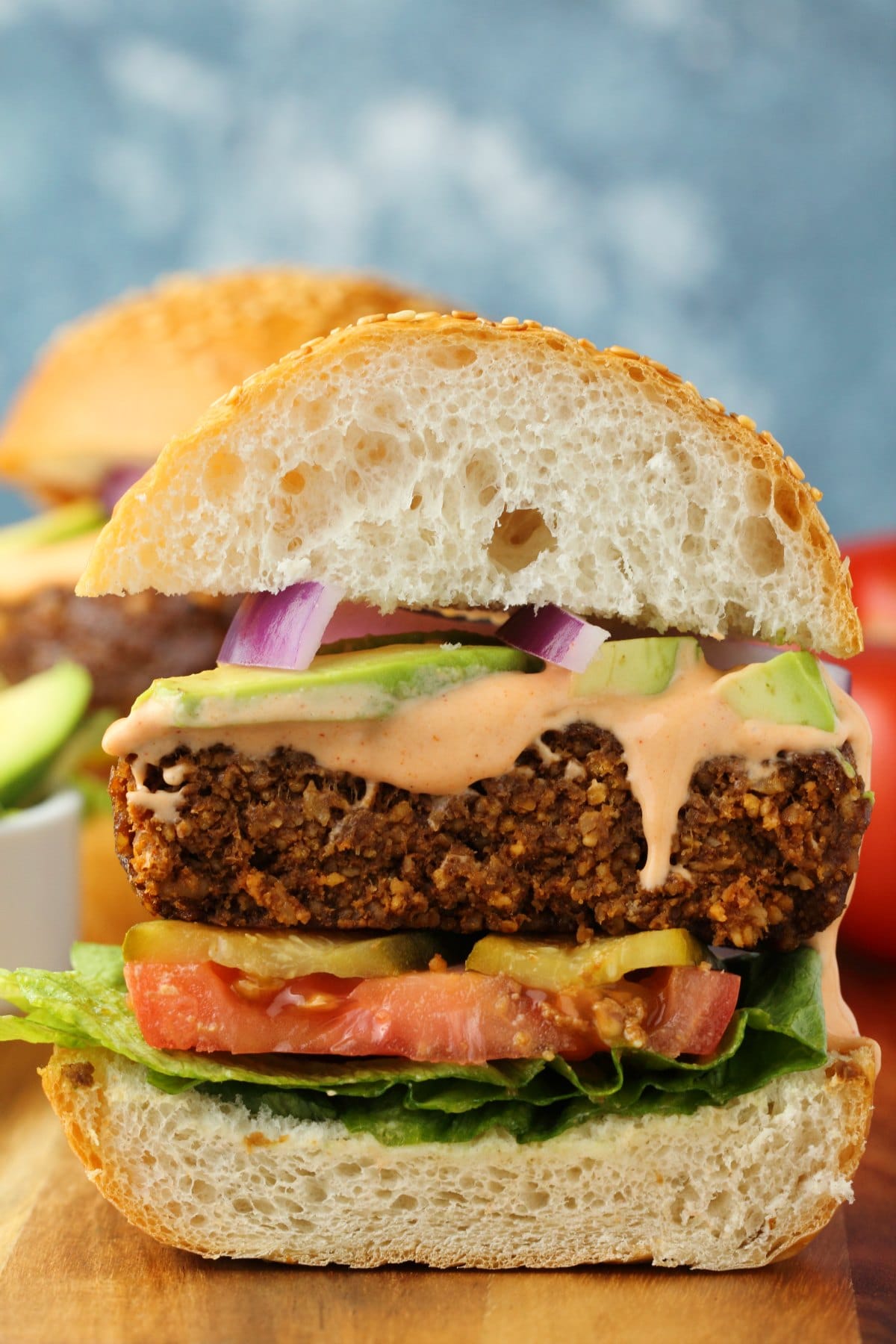 So please share your thoughts about this vegan burger recipe in the comments and please rate the recipe too, thanks!

Sign up to our email list for a fabulous dinner recipes ebook containing 10 delicious recipes (entirely free) and to be the first to know when new recipes are posted to the blog. 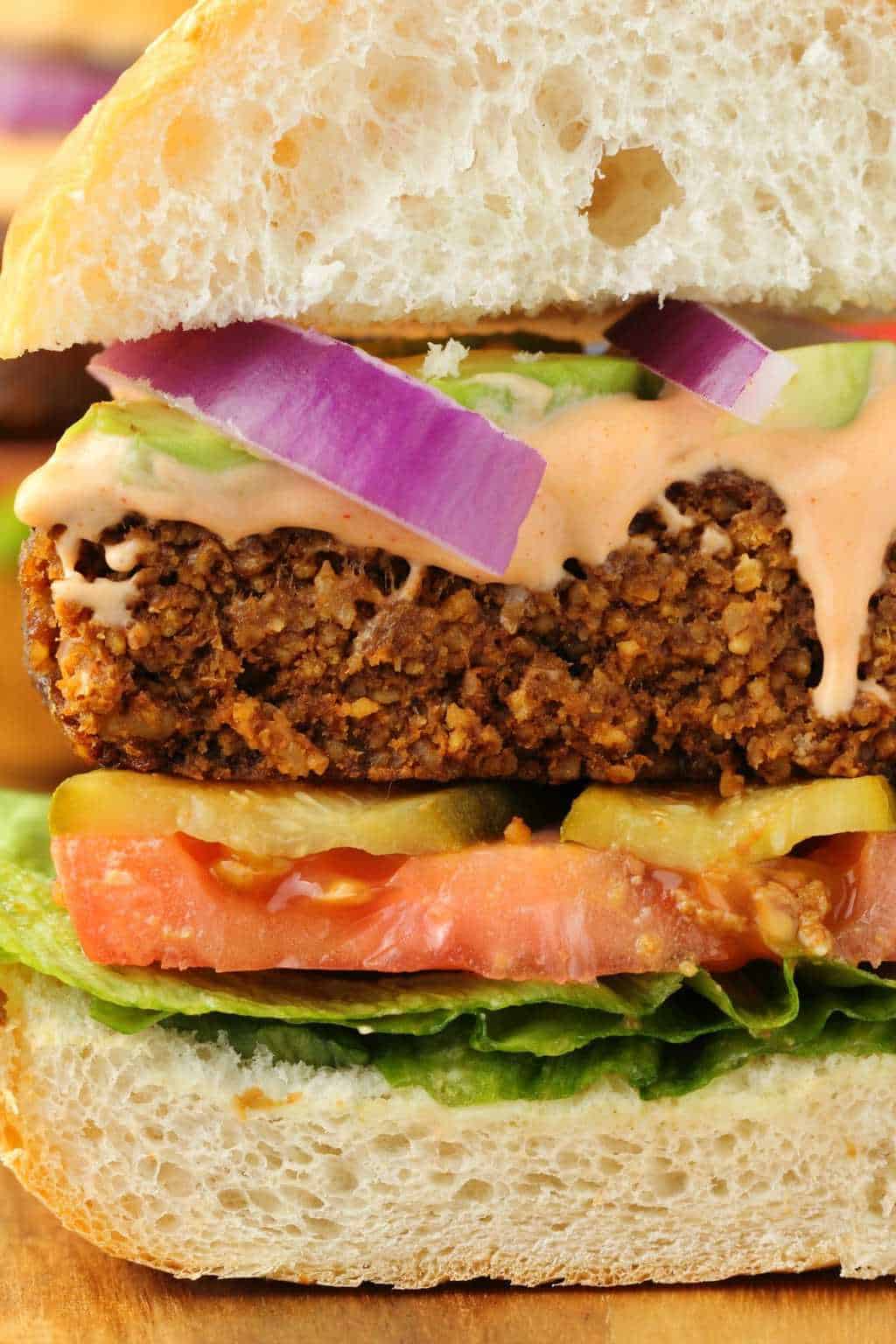 Super hearty vegan burger! Perfectly grillable, highly flavorful and extremely satisfying, this is a burger that vegans and non-vegans alike will enjoy!

For the Vegan Burgers:

*The couscous should be packed into the cup very well, 157g which is the standard cup measure for a cup of cooked couscous is a for a very packed cup, so pack it in and press it down with a spoon and then pack in some more.

*If you’re frying the burgers in a pan then use the 2 Tbsp of olive oil. However, if you’re doing them on the grill then just make sure the grill is lightly greased so it won’t stick to your burgers.

*Nutritional information is for burger patties only (including olive oil for frying and barbecue sauce for basting) and excludes what the burgers are served with.

Loving It Vegan is a participant in the Amazon Services LLC Associates Program, an affiliate advertising program designed to provide a means for sites to earn advertising fees by advertising and linking to Amazon.com. This site may contain some of these links to Amazon.com. If you make a purchase through one of those links, Loving It Vegan will receive a small commission from the purchase at no additional cost to you.
Previous Post: « Vegan Thousand Island
Next Post: Vegan Sweet Potato Soup »