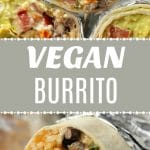 A vegan burrito that is filling, hearty, flavorful and every kind of delicious! Stuffed with black beans and corn, rice, vegan sour cream & guacamole. 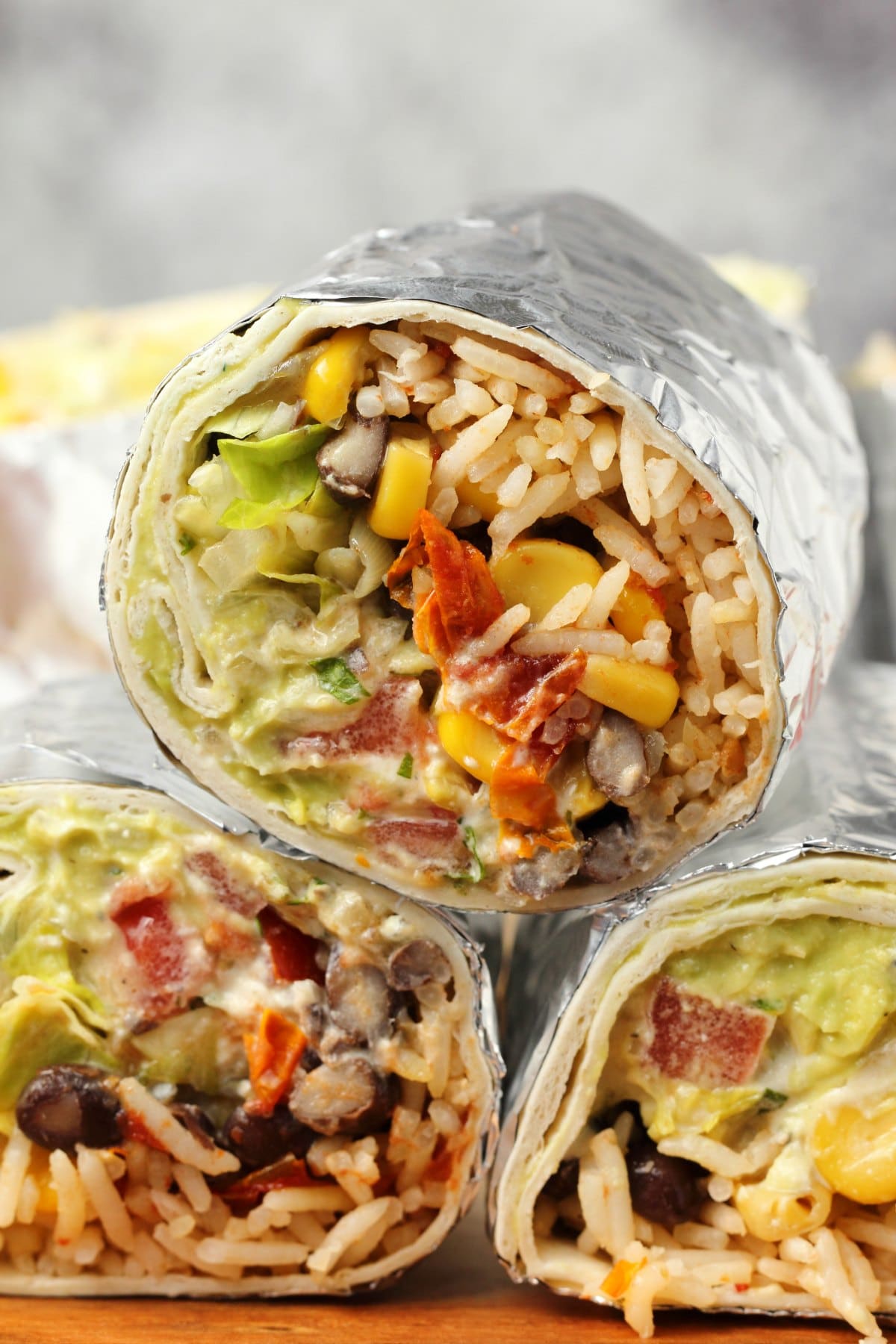 Is anything more delicious than a vegan burrito? Not many things I tell you!

These delicious black bean and corn vegan burritos are everything. They have so much flavor and texture going on, it’s just like happiness in your mouth (and tummy).

When we lived in Dubai there was a burrito shop right near the skate park and Jaye is big into skateboarding.

I’m not really big into watching because I fear (and I mean really fear) for the guy’s life! It’s not good for the nerves. But I could usually be persuaded to go anyway if he said the magic words: ‘we can get some burritos after!’

That’s how much I love a good vegan burrito. And these homemade ones are just as good. 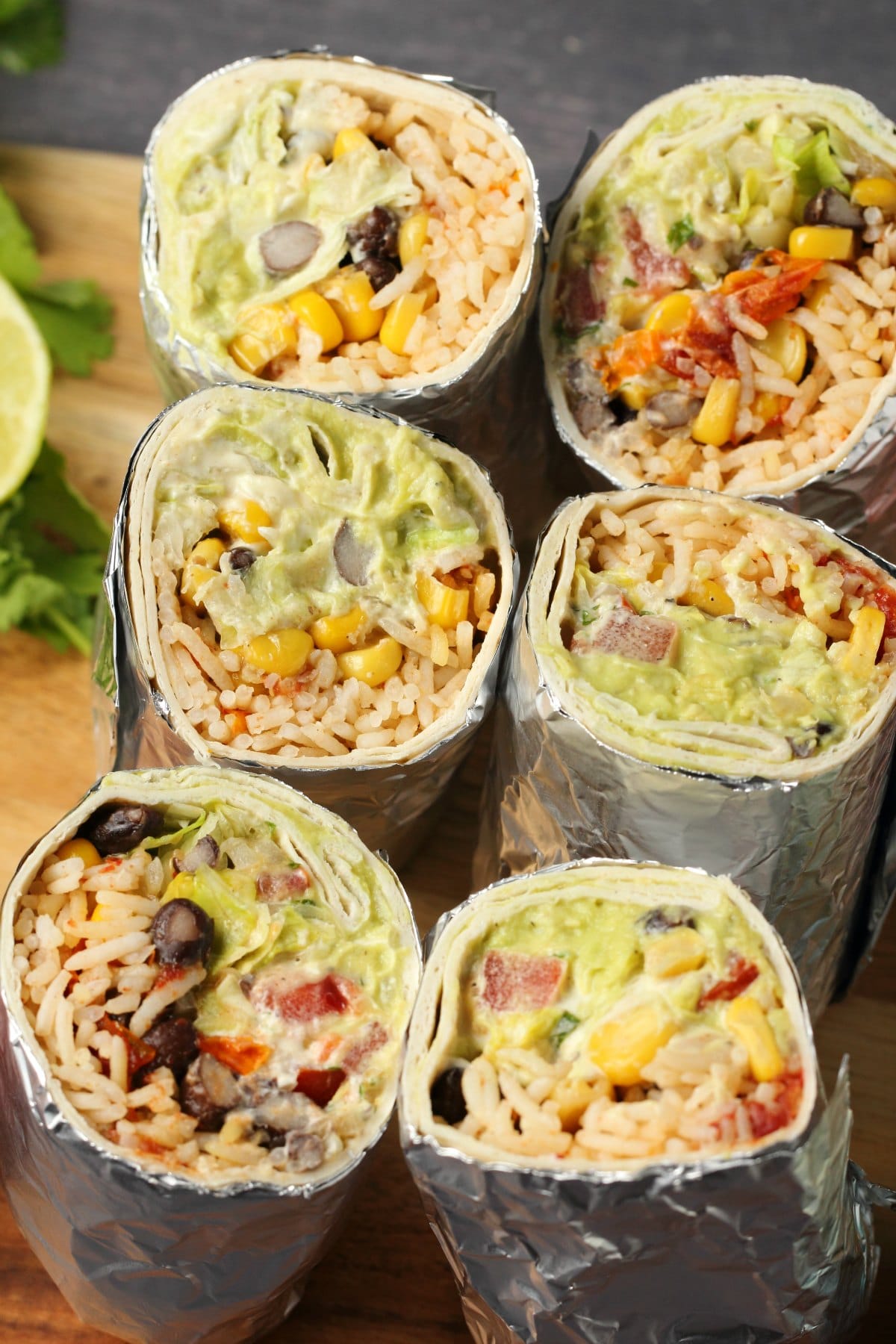 How to make a vegan burrito

Now I’ll be honest, it’s not the fastest thing you’ve ever made. There are a few elements involved, you don’t have to do everything, but the more elements you add, the more delicious your burritos will be!

It’s ideal if you can get someone else involved to help with the prep. There’s nothing difficult that has to happen here, but just a few moving parts.

You make some vegan sour cream, shred some lettuce, make a pico de gallo salsa, cook some rice and then mix the cooked rice with some chopped sundried tomatoes, a little fresh lime juice and some salt and pepper, make your black bean and corn mix and your guacamole.

Like I said, you don’t have to do everything, if there is something you’ve bought ready-made or something you can’t really be bothered to make, you can leave it off! But the real delighting your tastebuds comes from the full monty here.

So if you can split these tasks up between a couple of people, put some music on and pour some wine, you can have a fun time of it.

Even if there is just one of you doing all of it, you can get it all done in around an hour. But it’ll be more fun if you can get a buddy on board.

How to roll a burrito

You want to place the filling in the center of the tortilla and then fold in the sides and then roll it up!

A picture is worth a thousand words though so I did find this 23 second video on youtube that is really just a super simple way to demonstrate how to do it. I don’t think this is a vegan burrito that they’re rolling, but we’ll just pretend that’s vegan cheese on it.

This next video is a bit longer (but only 1 minute) and has some extra tips on getting the perfect rolling technique for rolling your burrito and I think this one IS a vegan burrito – yay! So watch that one as well and you’ll be all set. 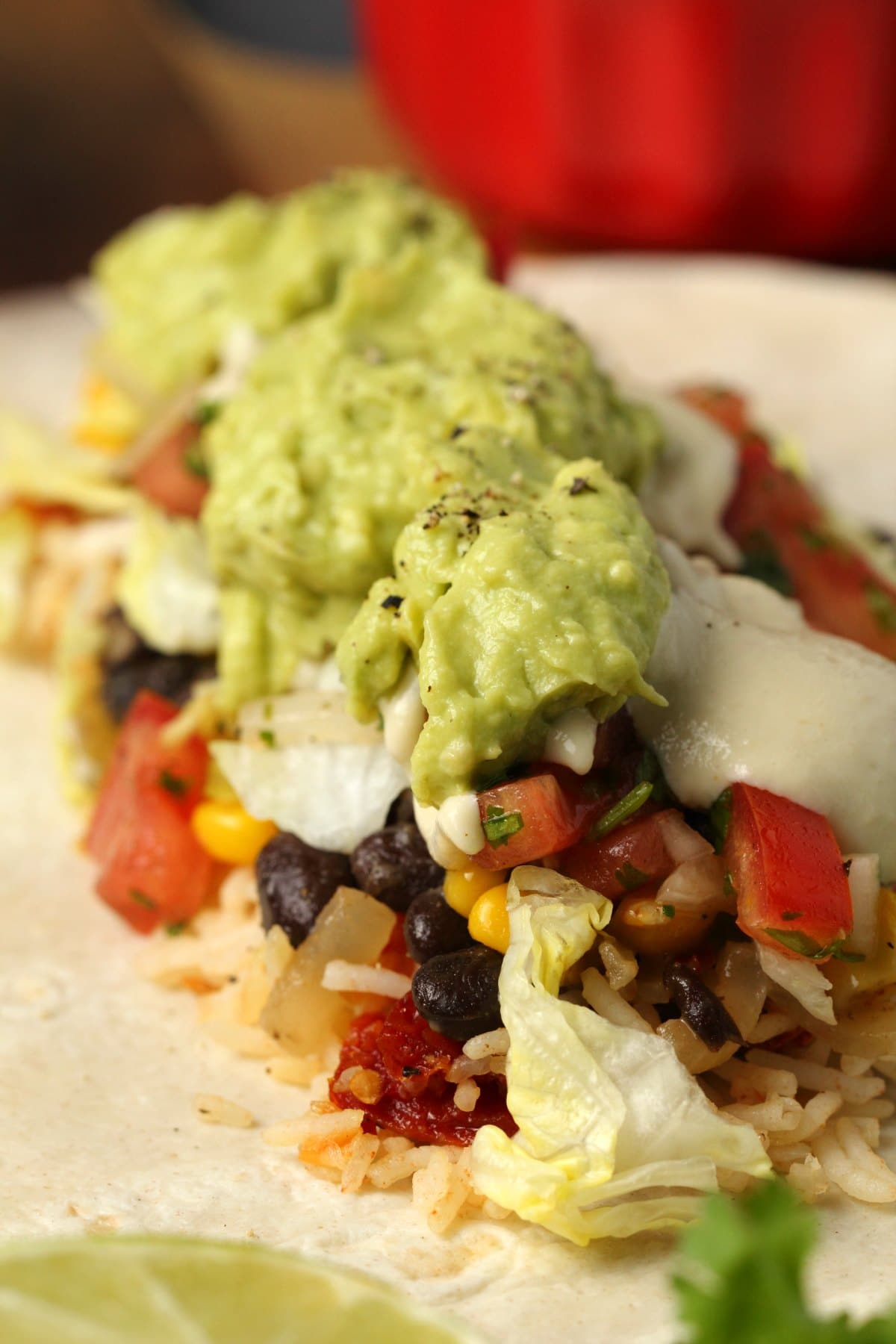 Can I make these vegan burritos gluten-free?

Yes! You can use a gluten-free tortilla for the wraps if you prefer. Everything else in this recipe is already naturally gluten-free.

How to store vegan burritos

You can make up more burritos than you’ll eat right away and keep the remaining burritos in the fridge and have them the next day.

I wouldn’t keep them for longer than that though.

Can I freeze them?

Hmmm, if you want to freeze these, then don’t add in super fresh ingredients like shredded lettuce and pico de gallo as those don’t freeze well. You could use shredded cabbage instead of lettuce if you wanted to as that does freeze well. Wrap them in foil before freezing and then place into an airtight container or freezer bag.

This makes a big batch

This does make a big batch of burritos, 8 large vegan burritos. So either make this when you have enough people who will eat them over a day or two at the most, or scale the recipe down. 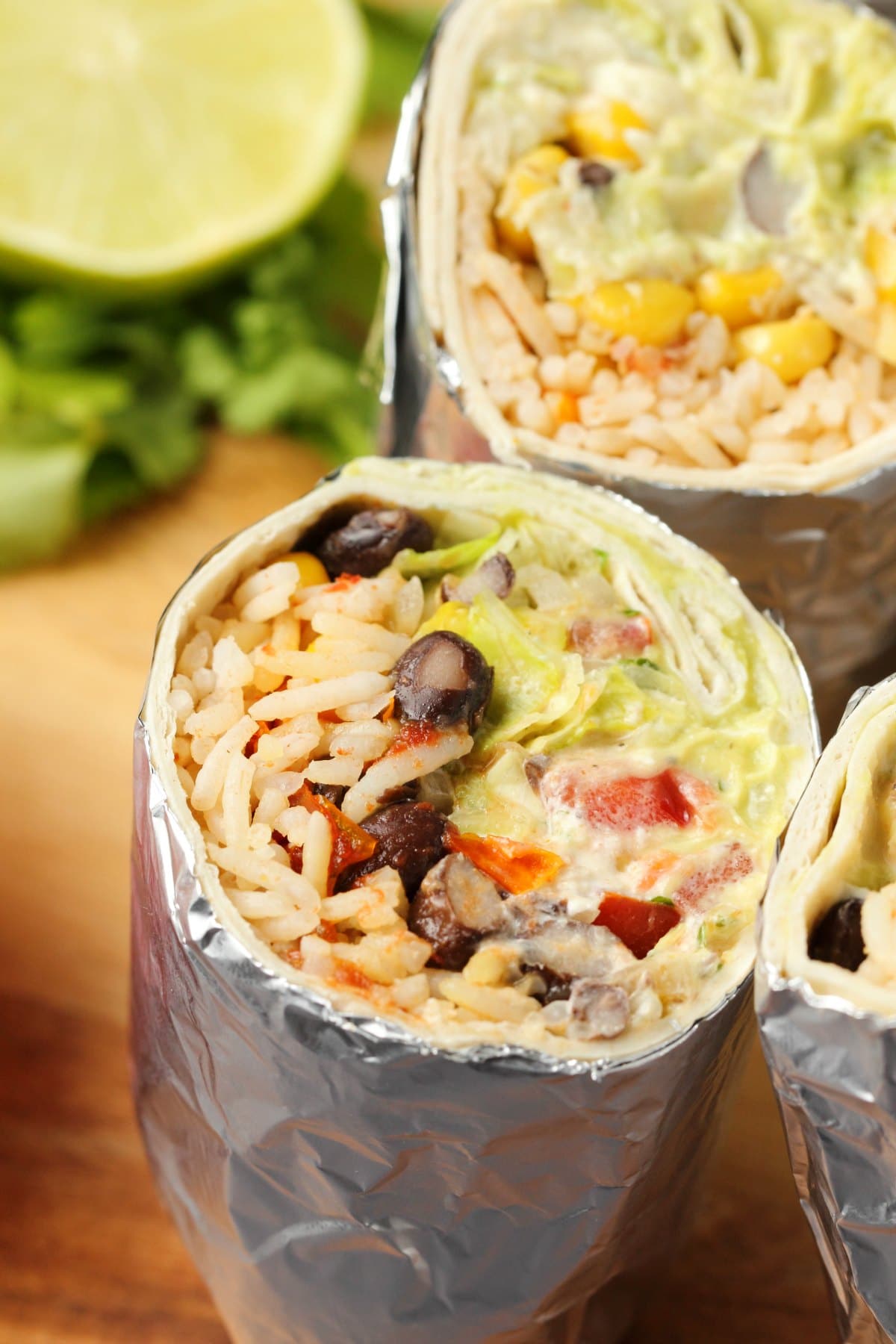 So I really think you are going to love these vegan burritos! They are:

Keep leftover burritos wrapped and stored in the fridge overnight and enjoy the next day. See notes above for more storage and freezing instructions.

And oh my I almost forgot, another thing that would be awesome in these vegan burritos is some vegan taco meat (oh man that stuff is good!)

Let us know in the comments what you think of this vegan burrito recipe and please do rate the recipe too, it’s super helpful.

And while you’re here, sign up to our email list, you’ll get an awesome free recipe ebook containing 10 delicious vegan dinner recipes and you’ll be the first to know when new recipes are posted to the blog. 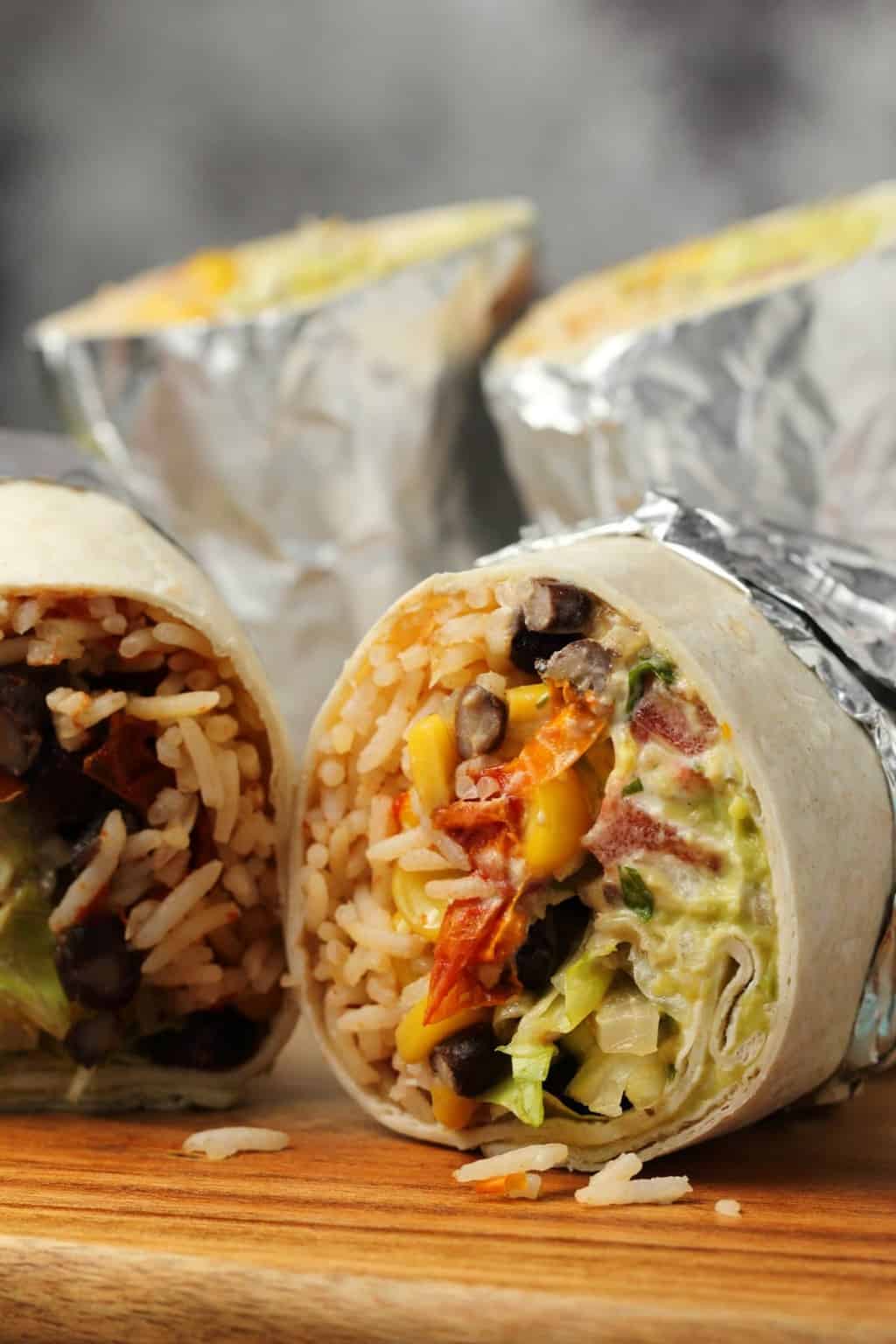 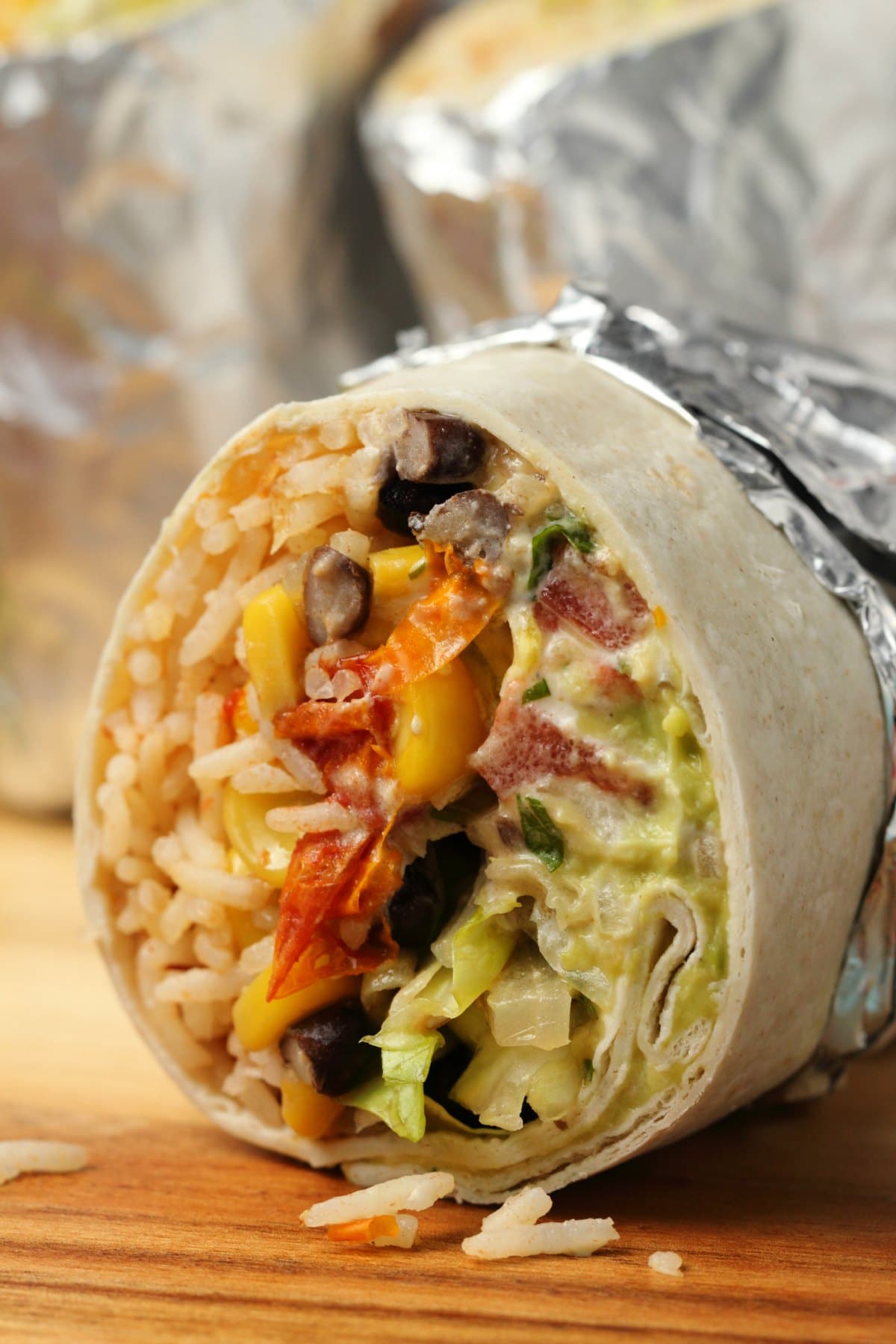 For the Black Beans and Corn:

For the Sundried Tomato Basmati Rice:

For the Pico De Gallo Salsa:

For the Vegan Sour Cream: