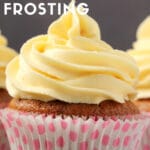 This delicious vegan buttercream frosting is silky, smooth and velvety and perfect to spread on cakes or pipe onto cupcakes. Easy 4-ingredient recipe.

This vegan buttercream frosting is so creamy and silky you will fall completely in love with it!

It works wonderfully spread onto cakes or piped onto cupcakes. It’s also wonderful spread onto cookies. If you’re looking for a frosting for some vegan sugar cookies, this works great!

It’s a simple 4-ingredient recipe that is totally versatile and comes out beautifully every time.

When testing this recipe I tried it out on our vegan vanilla cake and that is the cake that you see featured below. I doubled our vanilla cake recipe to make it a 9-inch beauty and this frosting was the perfect amount to spread onto a 9-inch cake.

As you can see from the photos below, I probably went a little heavy with the frosting in the middle of the cake, it’s a little thicker in the middle than it is on top, whoops!

But it’s definitely enough frosting for a 9-inch cake and if you want to use it for an 8-inch cake it will be great too. You’ll just have it on a little thicker, which is never a problem in my view.

The cupcakes featured in these photos are our vegan vanilla cupcakes and piped on as you see in these photos, this was the perfect amount of frosting to generously pipe frosting onto 12 cupcakes.

If you piped a bit less generously, or if you spread it instead of piping it, you could frost a lot more cupcakes.

How To Make Vegan Buttercream Frosting

If your mixer has a fairly small bowl (like mine) then hold a tea towel or paper towel over it (carefully, don’t let it get caught up in the mixer) when it starts so that powdered sugar doesn’t puff up out of the bowl.

Alternatively you can cream the butter first and then add in the powdered sugar bit by bit but that method doesn’t usually fit in with my impatient personality.

The most important thing to a good vegan buttercream is the texture. It needs to be really silky and spreadable but also firm enough to pipe. So you’re looking for a really thick, but silky, consistency.

So the vegan butter that you use becomes quite important for this. The ideal texture for your vegan butter is one that is quite firm.

You can use something like Earth Balance buttery sticks if you have access to it, but a vegan butter that comes in a tub is also going to be great, it just needs to be one that is fairly firm.

You get some tubs of vegan butter that are really soft straight from the fridge, like they are just never firm. That will be less ideal here. If that’s all you have access to, then you might just need to add about ¼ to ½ cup more powdered sugar to get this to the right consistency.

If all you can get is those bricks of margarine (that might be accidentally vegan) that are rock hard, then that will work, but you might need to add a few extra drops of soy milk or almond milk to it.

So if following the recipe as written results in something that is not thick enough, add more powdered sugar and don’t be shy.

If it results in something much too thick, add in some non-dairy milk a drop at a time.

Can I use coconut oil instead of vegan butter? Not in this recipe. It’s really important that the ‘butter’ part of the buttercream be a vegan butter.

What brand of vegan butter do you recommend? I have used a few, I have used and like Nuttelex (Australian brand) and Earth Balance (USA) but since we have a worldwide audience, I don’t generally find it that useful to recommend a particular brand. Use what is available and follow the tips above in getting the right texture irrespective of the brand you use.

How many cupcakes will I be able to frost with this recipe? It depends! If you’re piping like I did in these pictures, then it will frost 12 cupcakes. If you’re just doing a spread of frosting on top, then it could be enough for triple that number! And if you’re piping the frosting but doing it much less generously (not going for the ice cream cone look) then maybe you could frost as many as 18-24 cupcakes.

It’s also freezer friendly for up to 3 months. When you’re ready to use it, let it thaw in the fridge overnight and whip it up in the stand mixer again before using. 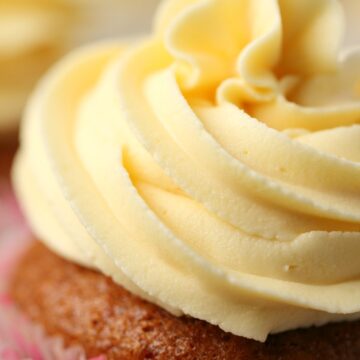