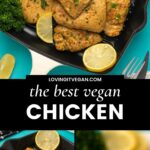 This vegan chicken is made with vital wheat gluten aka seitan. It’s super flavorful, high in protein and has the perfect ‘meaty’ texture.

So how’s this? You can make your own vegan chicken.

And it tastes…. like chicken. What is this sorcery?

Well, you’re not going to be confusing it with actual chicken, don’t worry about that.

But it has that perfect chewy seitan texture and it’s spiced and flavored to be similar to chicken, but not exactly.

And it’s actually really easy too. There are a couple of things to get the hang of, but on the whole, easy peasy.

I was inspired to make this vegan chicken recipe after making our vegan steak. The steak was so easy and so good, and I thought, well, vegan chicken can’t be too hard to make in that case. I was totally right.

In fact, it’s even easier to make this vegan chicken recipe because it has fewer ingredients and fewer steps than the steak does.

How To Make Vegan Chicken

Top Tip: I found it really easy to get vegan chicken stock and vegan chicken spice. The one I used is a local brand called Ina Paarman’s but if you read the ingredients of whatever you have locally you might be surprised to find that more than a few are vegan already.

How do you serve this seitan chicken?

Serve it with fresh lemon and chopped parsley. A little sprinkle of salt and ground black pepper is great too. Perhaps some vegan mayo as well.

If you want to cut them up so you have vegan chicken strips to put into a wrap or something like that, that works great too.

Can I make this plant based chicken gluten-free?

Unfortunately not this particular recipe. The vital wheat gluten is a crucial ingredient here and creates the texture. If you are gluten sensitive then try this recipe from One Green Planet for gluten-free vegan chicken.

The taste was good but they were quite tough and chewy. What did I do wrong?

You kneaded the dough for too long. You want to literally just knead it a few times, like a few flips over and presses with your hand until it forms a ball of dough that has just begun to firm up.

Pressing the dough down onto your board so you can cut it into four pieces also counts as ‘kneading’ in a sense, so you just want to tread lightly in the kneading department so that you get a good texture here that is not too chewy.

The opposite is also true, if your fillets end up too soft and you’d like the texture to be a little more firm, then knead the dough a little bit more the next time.

Keep leftover vegan chicken in a covered container in the fridge for up to a week.

It’s also freezer friendly, however, it might be best to freeze them after steaming (let them cool first). Thaw them in the fridge, and then rub in the spice and fry them up as usual. 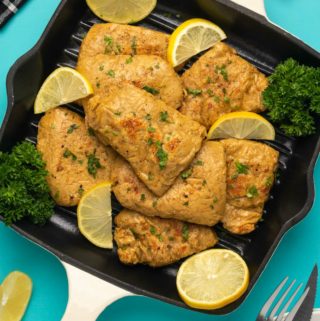