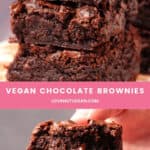 These vegan chocolate brownies are triple chocolate! And for all the chocoholics out there, this is for you!

I’m a proud chocoholic myself so I feel I have a unique insight into what we want. All. The. Chocolate. Yes, all of it.

They are seriously fudgy, with so much chocolate flavor it’s like a dream come true.

We adapted our basic recipe for simple vegan brownies to add heaps more chocolate for a super indulgent and decadent triple chocolate version. And oh my, it was a massive success.

Also check out our delicious vegan blondies for those times when you want something fudgy and delicious but butterscotch flavor instead of chocolate!

How To Make Vegan Chocolate Brownies

These vegan brownies are super fudgy and moist. If you like your brownies ultra gooey you can make them like that too. All you have to do is cook them for less time.

The brownies pictured were baked for 40 minutes. I tried a version where I baked them for only 30 minutes and they were so gooey! I know some people love them this way. So if you’re a gooey brownie devotee feel free to bake these for a shorter time.

I think the 40 minute baking time and the fudginess you can see in these photos is ideal but that’s my brownie preference. Make ’em how you like ’em.

The combination of cocoa powder and melted chocolate create a wonderfully dense and rich result here. Vegan buttermilk and coconut oil contribute to the dense fudginess. And we only use 1 tsp of baking powder in these brownies because we don’t want them to rise too much, we want them to be super dense. It’s not cake, it’s like pure chocolate!

Can I skip the instant coffee powder? You can. The coffee powder enhances the chocolate flavor, but it is an optional ingredient. You won’t taste the coffee at all in the final result, but if you don’t want to use it, you can omit it. However, if you can use it, it’s recommended.

Can I make the vegan buttermilk with almond milk? Yes you can. I prefer soy milk for a richer result. But almond milk will work fine too.

Isn’t that a lot of sugar? Haha yes, these brownies do use quite a lot (2 cups) of sugar. But this isn’t just to sweeten the brownies, it also creates that super fudgy and soft texture that we really want here. So…it’s worth it. And we’re baking here, not making a salad. ?

Can I use a different oil? Coconut oil works great and contributes to the really decadent fudgy texture, but yes, you can use a different vegetable oil without a negative impact.

Can I make them gluten-free? You can! Check out our recipe for vegan gluten free brownies!

Keep them covered at room temperature where they will stay good for up to a week. They are also freezer friendly for up to 3 months.

*Weigh your flour for the most accurate results.

*Instant coffee powder can be omitted if you prefer, but it adds a little extra punch to the chocolate flavor.

*Almond milk can also be used to make vegan buttermilk but soy milk is preferred because it creates a thicker/richer texture.

Loving It Vegan is a participant in the Amazon Services LLC Associates Program, an affiliate advertising program designed to provide a means for sites to earn advertising fees by advertising and linking to Amazon.com. This site may contain some of these links to Amazon.com. If you make a purchase through one of those links, Loving It Vegan will receive a small commission from the purchase at no additional cost to you.
Previous Post: « Vegan Pesto Pasta with Pan-Roasted Cherry Tomatoes
Next Post: Vegan Lentil Curry »