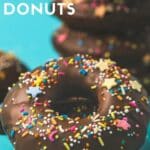 Vegan chocolate donuts are rich, moist, delicious and so quick and easy to make. Topped with with melted chocolate and sprinkles.

Oh my! I think this is my favorite donut recipe ever!

Ever since I made my baked vegan donuts, I wanted to try making some vegan chocolate donuts.

And these are even better than I imagined. They’re kind of like chocolate cake donuts! And they’re topped with melted chocolate and sprinkles so basically they’re the best thing ever.

How To Make Vegan Chocolate Donuts

They are simply divine when fresh but will also keep covered in the fridge for up to a week. They are also freezer friendly if you want to freeze them. 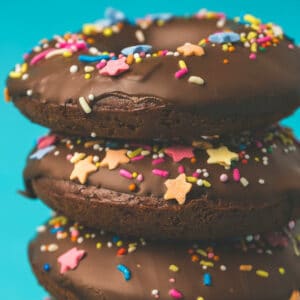 For the Chocolate Topping: