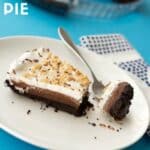 This decadent vegan Oreo pie is made with an Oreo cookie crust, creamy chocolate peanut butter center and a whipped coconut cream topping.

So I’ve gone ahead and made the most decadent pie I could dream of.

Well, another one at least, since I have been known to make decadent pies before.

I was scrolling facebook, as you do. And a recipe video starting playing.

It was a pie recipe quite different to this one, in the sense that it used a heap of ingredients that did not come anywhere near this pie, like cream cheese and heavy cream, but it gave me the idea for this delicious vegan Oreo pie.

And like pretty much all of my recipes, I had to test it a couple of times before I perfected it, so Jaye has been eating this pie every day for a couple of weeks, and there have been NO complaints from him.

How To Make Vegan Oreo Pie

The Oreo crust is just two ingredients, so that’s super easy. And the coconut whipped cream topping is a breeze to make.

It was the chocolate peanut butter mousse center that I had a little trouble with.

I had briefly considered using tofu for this, but quickly discarded that idea. So far I have resisted tofu additions to desserts. But as with other things I once resisted but ended up being awesome (like vegan chocolate avocado mousse), I’ll probably change my mind on this sometime.

The winning formula for the chocolate peanut butter mousse center turned out to be creating the mix to be VERY liquid. And then it firms up in the fridge to the exact mousse consistency.

So when you make this pie, don’t freak out when you’re pouring the mousse layer on and it’s so liquid you can’t imagine how this will turn into mousse – never fear!

Provided you’ve followed the recipe – it firms up perfectly into the most delish peanut butter mousse ever.

Top with the whipped coconut cream, some vegan chocolate sprinkles and crushed peanuts and you have a dessert to write home about.

Each layer offsets every other layer beautifully. The coconut whipped cream topping is left plain (no added sugar or flavorings) so that it offsets the sweetness of the first two layers. You have the crunchy Oreo cookie base, the light and dreamy chocolate peanut butter mousse center, and the whipped cream topping which rounds it off perfectly.

Once out the fridge it will melt fairly soon. Jaye tried to take a slice to work one day, but by the time he got there it had melted completely, and we’re in what passes for winter in this part of the world, so it’s not super hot (okay it’s still pretty hot here).

So keep it in the fridge, and serve it straight out of the fridge. It’s not one you’ll take to work unless you’re taking a cooler bag or it’s actually cold where you are.

I haven’t tried freezing this one but my feeling is that it likely wouldn’t work that great for freezing. I think the coconut cream topping might separate or get weird once it thaws out. 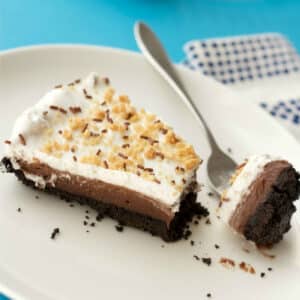