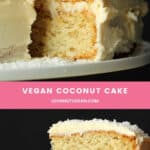 I’m over the moon about this vegan coconut cake! It came out like a dream.

It’s gorgeous and it’s super easy to make too.

How To Make Vegan Coconut Cake

The frosting is the most delicious velvety coconut frosting that gets its coconut flavor from coconut rum and just a dash of coconut milk.

And we decorate it with loads more dessicated coconut sprinkled everywhere. Because why wouldn’t you?

The cakes come out quite firm on the tops. I was even joking that they’re a little ‘crispy’ and  comparing them to cookies. But don’t be put off, it works. Once it’s frosted it’s just a delicious cake. No hint of dryness or crispiness to be found.

But while it may not be super light and fluffy it’s definitely not overly dense either, I think you can see that from the photos. But it has more density than the other cakes mentioned above because of all the added coconut. So it’s sort of dense and fluffy, if that can possibly make sense!

What size cake pans to use in this recipe?

Can you make cupcakes from this recipe?

Yes you can make cupcakes. This recipe will make around 18-24 cupcakes. Bake for 20-25 minutes.

You should be able to make this cake gluten-free by swapping the all purpose flour for a gluten free all purpose flour blend. It must be a blend though and not a single type flour like rice flour or coconut flour as that will NOT work. If you find the cake is a bit dry using a gluten-free blend (gluten-free flours can absorb more moisture) then increase the oil slightly.

It is also freezer friendly either frosted or unfrosted for up to 3 months. 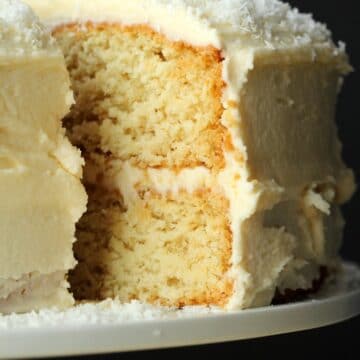 For the Coconut Cake:

For the Coconut Rum Frosting: