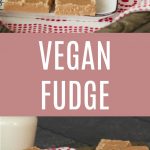 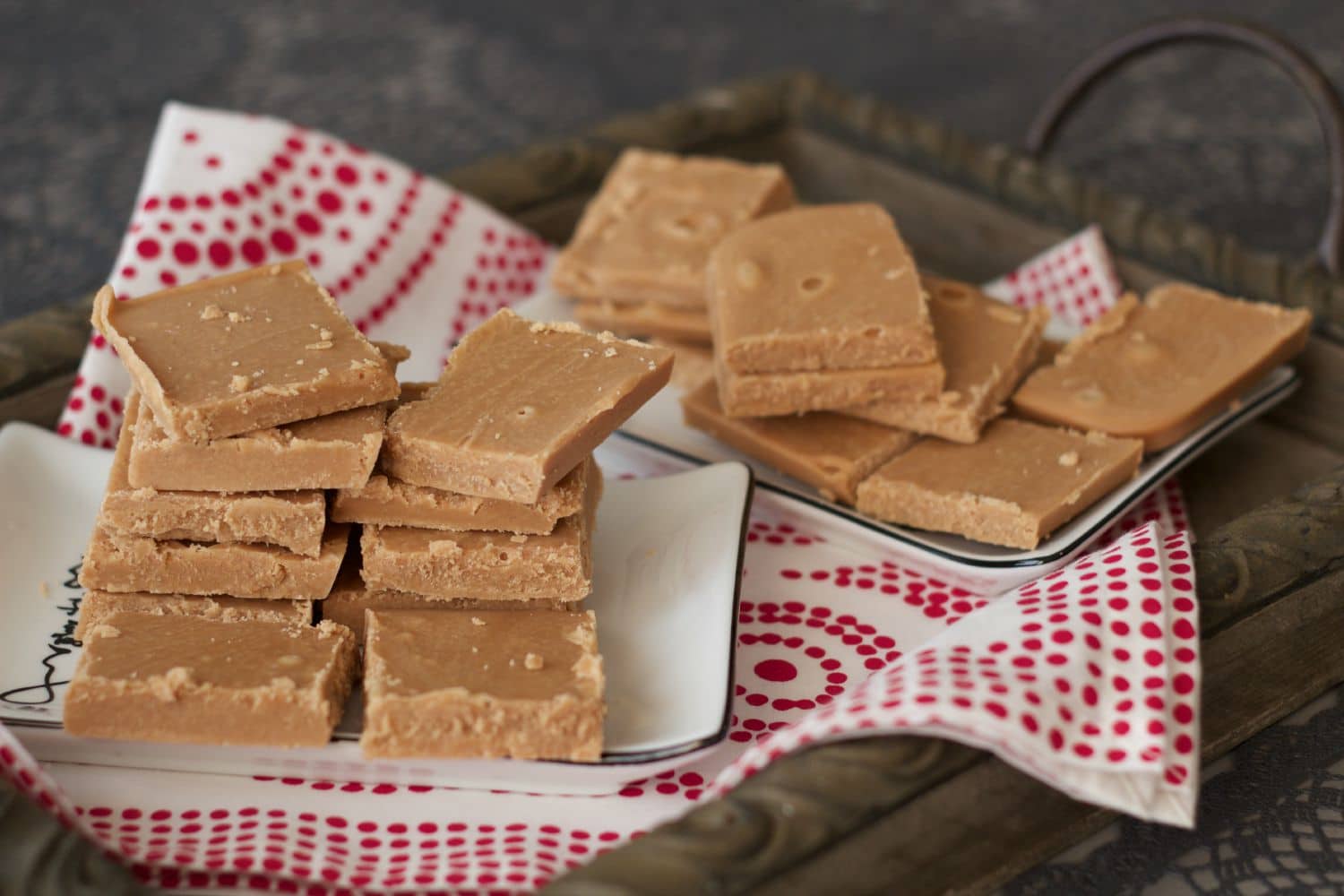 Fudge – you just don’t get sweeter! In fact the ingredients list in this might just make your eyes bulge, but chill, you don’t eat this every day after all.

This is a recipe that South African’s make regularly. We call it fudge in SA, but apparently in Australia/New Zealand they call it ‘Russian Fudge’. And in Scotland they call it ‘Tablet’ (at least according to the internets – I could be getting that ALL wrong).

As kids, we used to make this stuff all the time. Which is actually pretty insane when I think about it, because making this is NOT child’s play! But for a bunch of sugar addicts who were up for making anything as long as it was sweet – making fudge was what we called a good time.

However, considering that you’re working with boiling sugar here, which may as well be hot larva – I’d say don’t make this if there are little kids anywhere in the vicinity, don’t make this while drinking, talking on the phone or doing ANYTHING that may take your concentration away from the task at hand. Not even for a second.

The end result is so freaking wow, I say it’s worth it. And yes, without any toddlers running rampant, a firm power stance, my air conditioner on full, and no glass of wine to be seen anywhere, I feel pretty confident making this fudge. 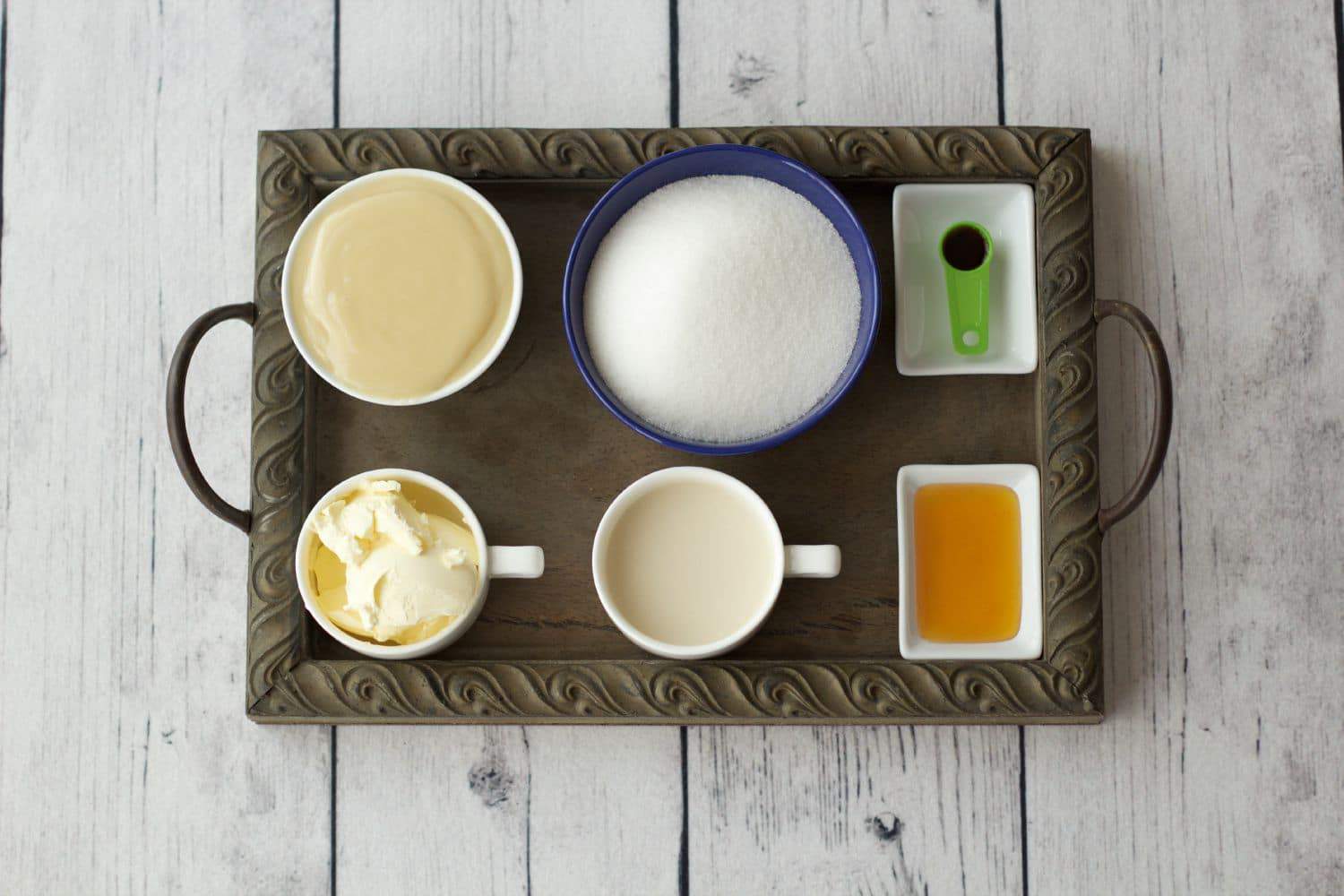 Of course the traditional version of this recipe uses regular butter and dairy condensed milk, but I made a vegan version by switching out the butter for vegan butter, and making up a batch of vegan condensed milk.

Once you get the hang of making this fudge, which really, is like making candy, it will seem easy. But it took me a full 6 tries before I got it right.

I’m not saying the first 5 tries weren’t fabulously edible, just that they did NOT look like the gorgeous little squares you see in these pictures. 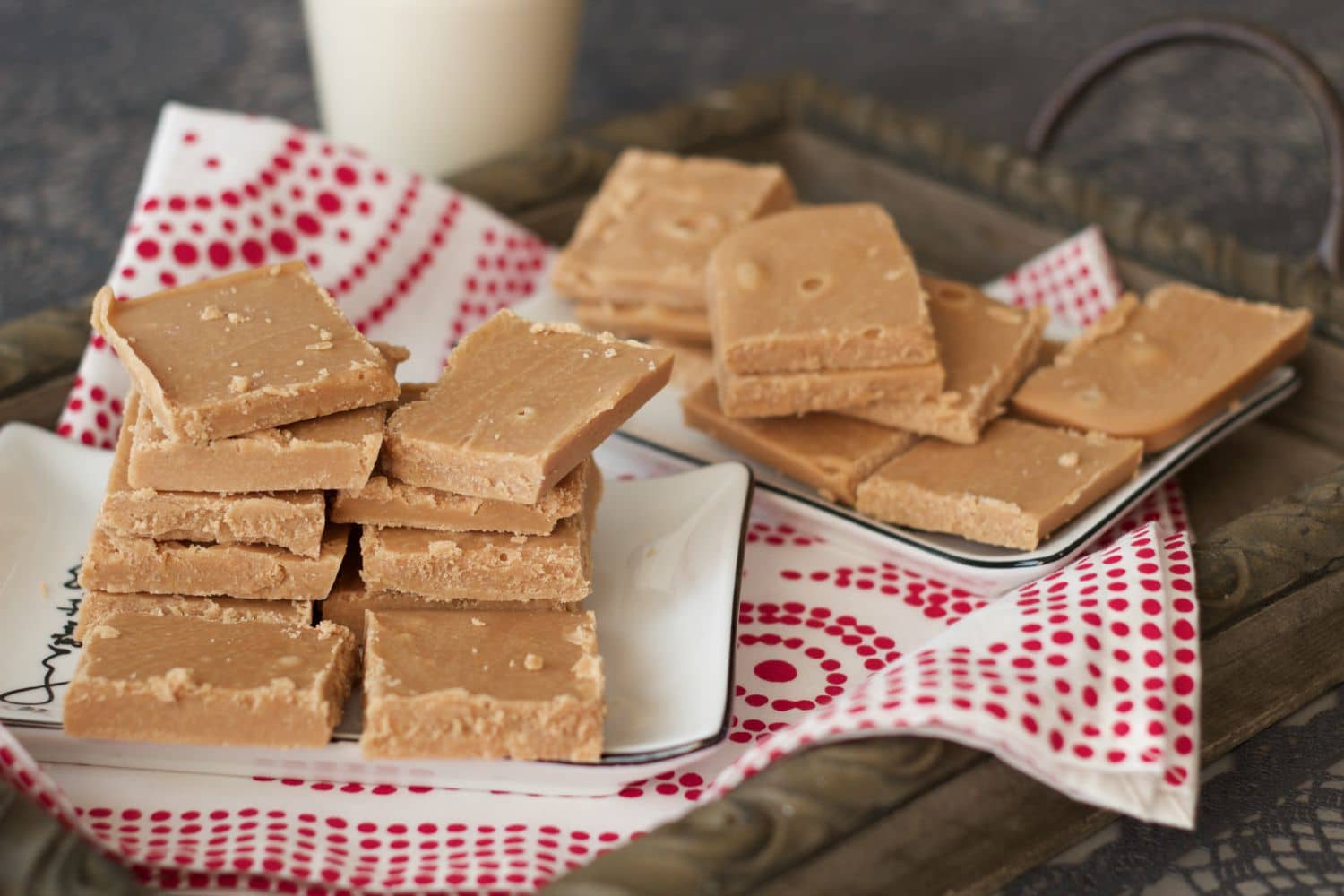 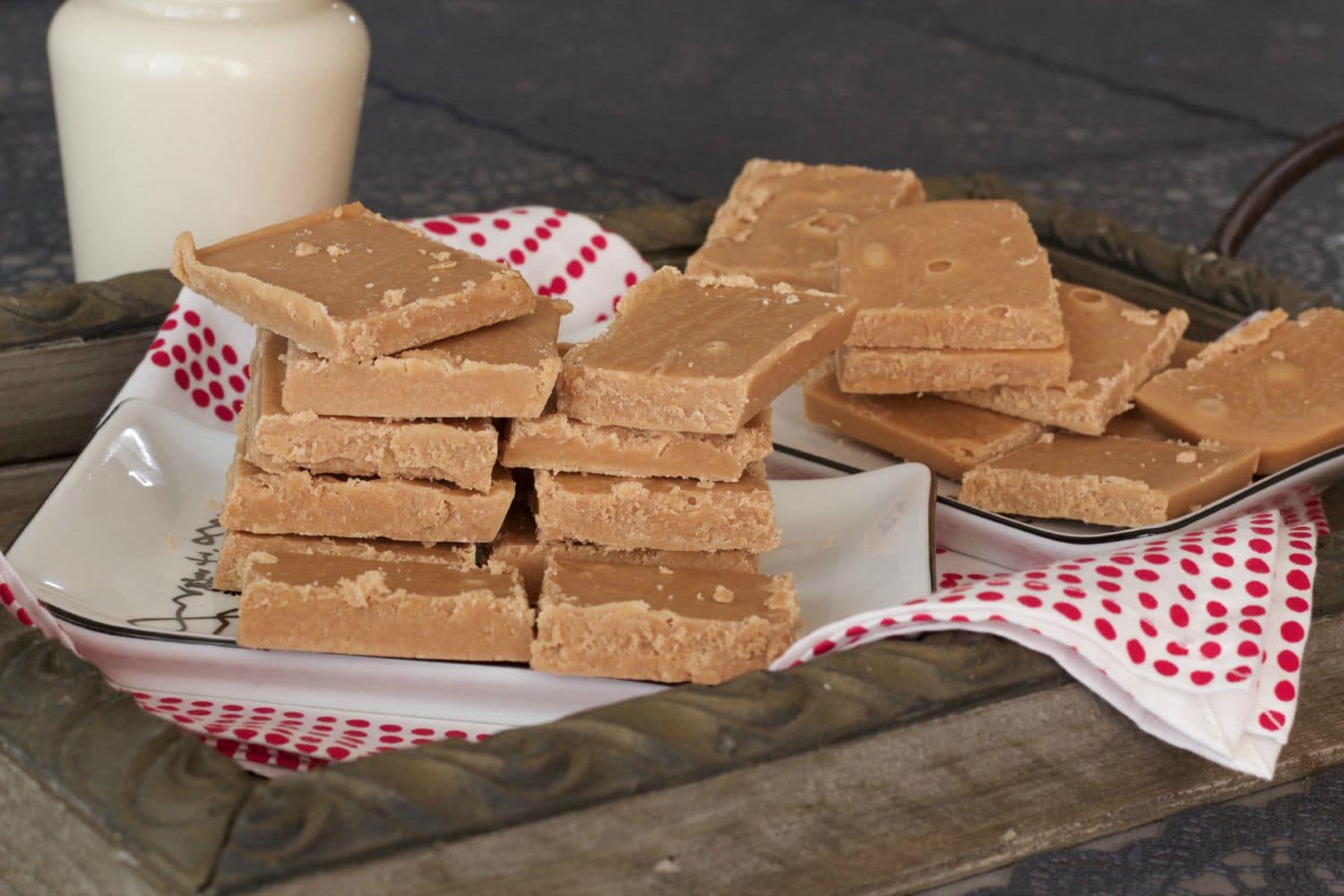 But I really think that if you follow all my instructions to the letter, you could have a perfect batch from the first go.

You absolutely MUST have a candy thermometer. So many fudge recipes online will tell you about keeping a bowl of ice water next to the stove and dropping in a ball of fudge and judging if it’s reached ‘soft ball stage’ from the way it feels when you roll it into a ball, but honestly this method is so hit and miss it’s just unreal. 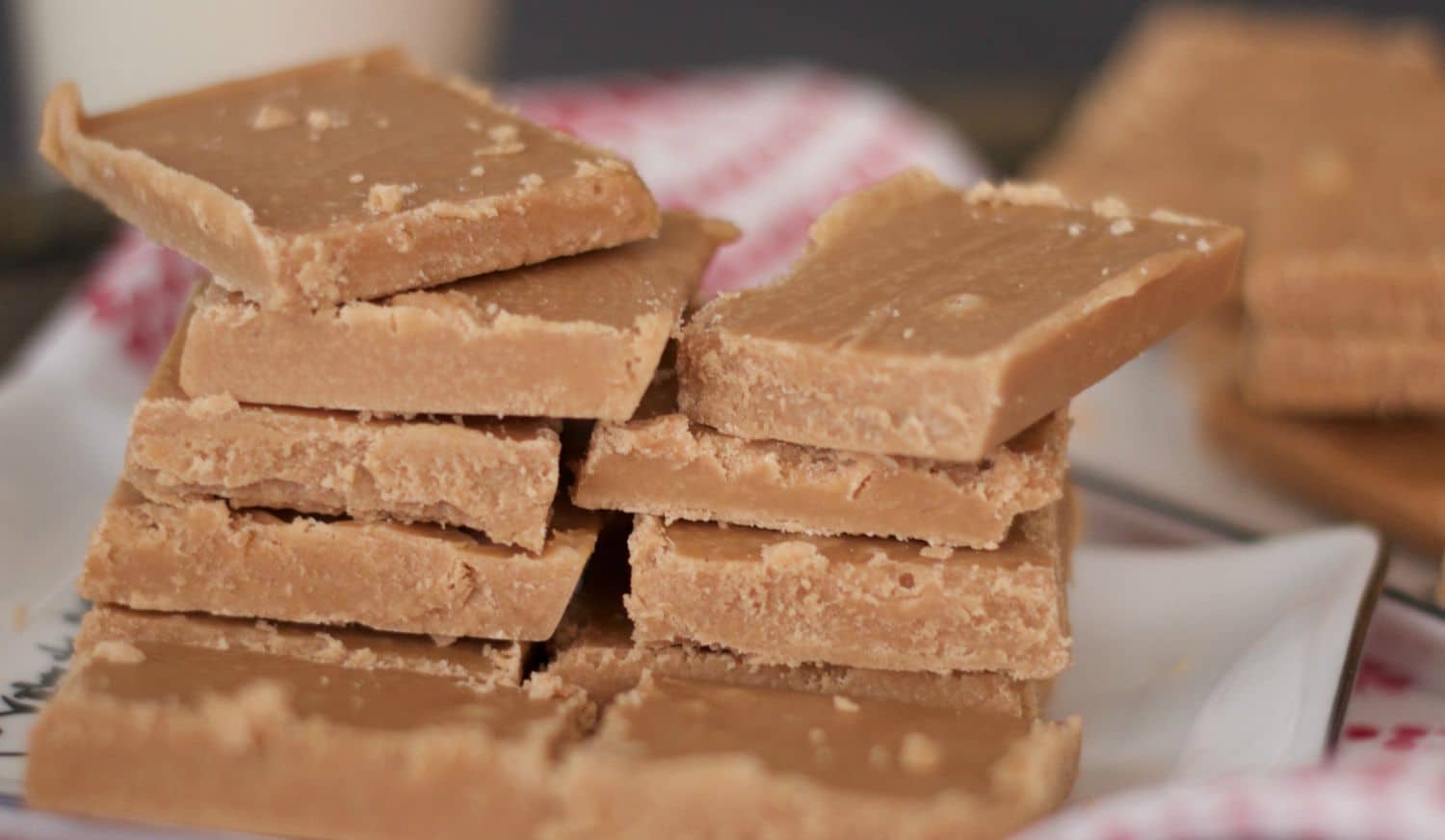 I honestly don’t know how we managed it as kids, we didn’t have a candy thermometer and though my memory is a bit sketchy on the details, I think we likely ended up eating quite a few batches of toffee, which, delicious as it is, is really fudge gone wrong.

So, to make fudge, you melt the butter and then add the sugar, golden syrup (can use maple or any other syrup too) and non-dairy milk and stir until all the sugar is melted.

Then you add the vegan condensed milk and keep stirring all the way to soft ball stage, and with a sugar thermometer, knowing when soft ball stage has occurred is just too easy.

With a candy thermometer, all you have to do is place it into the boiling mass of sugar, vegan butter and condensed milk and see if it’s reached soft ball stage.

Too easy. And once it has, that’s the time to remove the pan from the heat. 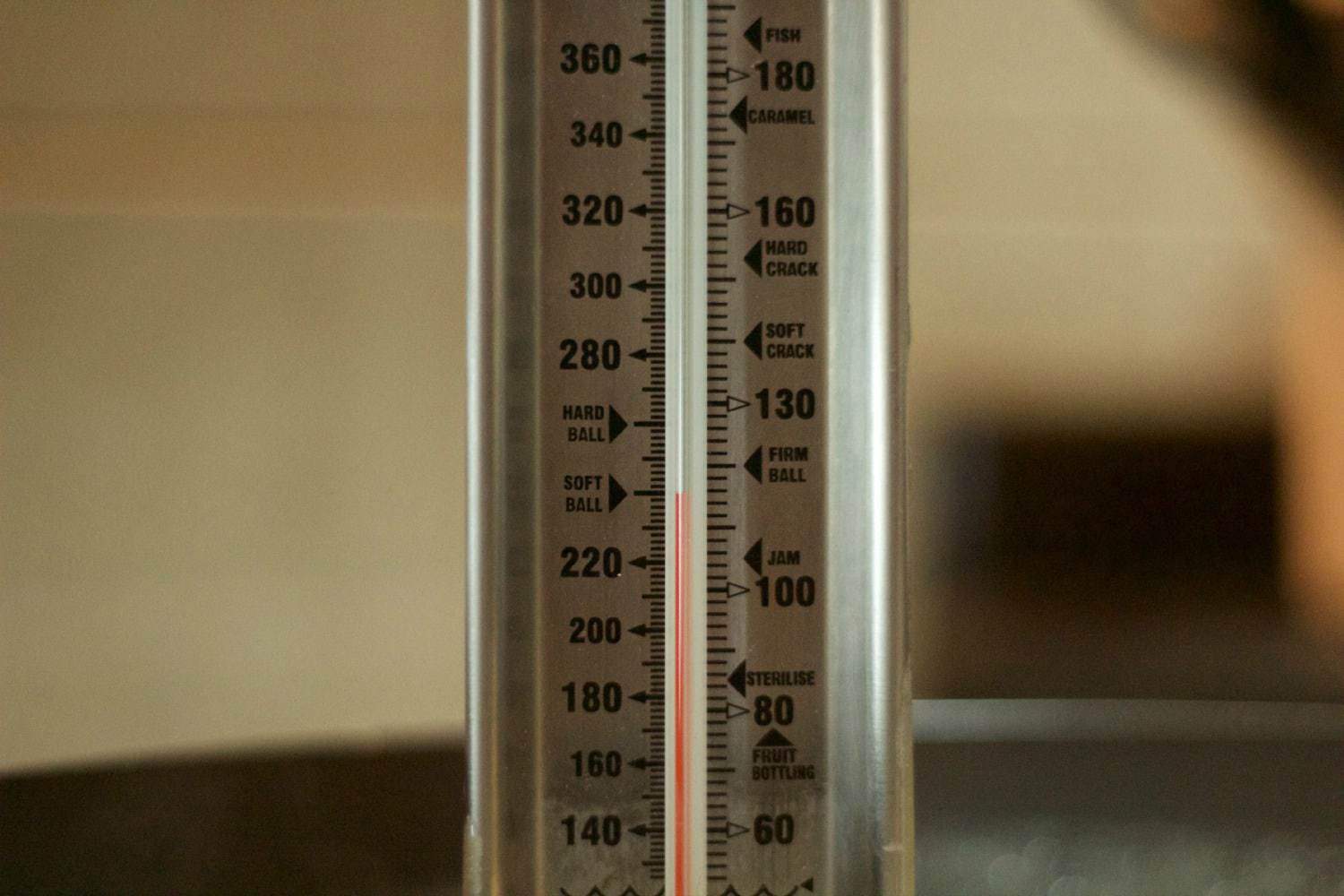 Then you add some vanilla extract and stir that in. Then out comes the electric mixer.

Now, you have two options here. You can beat it directly in the pot you cooked it in, but this is risky because the moment the mixture loses its gloss and the mix starts to form these little ribbons on the surface of the mixture (and yeah, I know, this is so vague!), you have to get it out of that pot and onto the tray and smooth it down and it’ll be setting AS you’re doing it.

If you do it too soon, you’ll have toffee. If you do it too late, then it’ll start to set WHILE in the pot and then as you try and get it out it will crumble and you’ll have a crumbly mess instead of neat little squares, which is what you’re likely going for.

Still tastes delicious if all you have is crumbles, but the second option can be a bit safer, especially as you’re just learning the steps.

And the second option is to pour it straight into the tray and then whisk it with your electric mixer directly IN the tray (as in the picture below). That way when it sets, you just stop mixing.

And if in any doubt, have a taste and if it’s toffee, keep whisking, if it’s fudge, you’re done. But really, you can’t miss it, once it hits the fudge stage it sets at lightning speed. 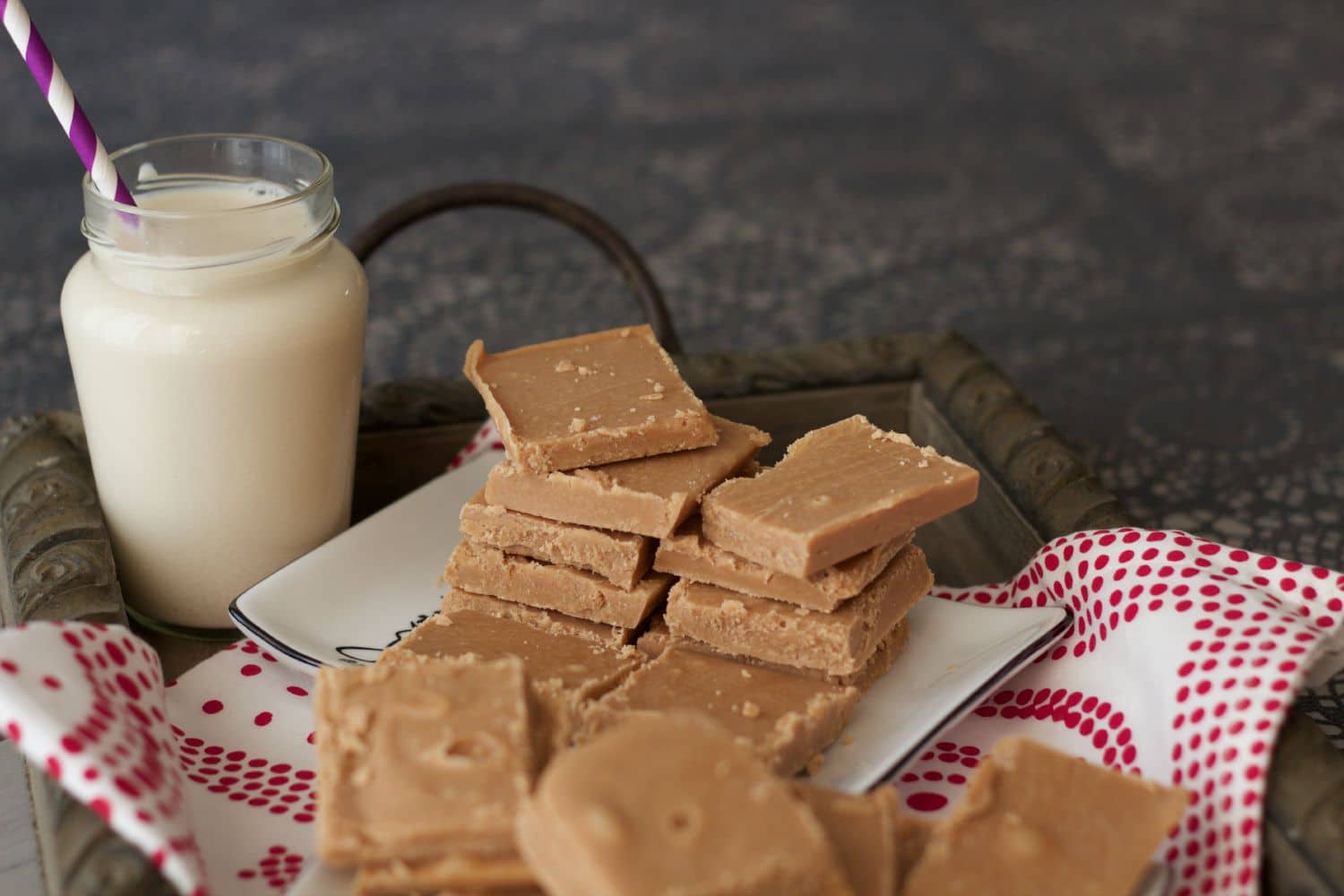 The only thing with this is that you end up with fudge that looks more like ‘artisan fudge’ with nice little ridges on top from your electric mixer, rather than the smooth pieces shown in these photos. But it’s just a different – equally good – look.

You can’t miss the ‘setting’ stage, but what makes the beating it in the pot so risky is that you have to identify what feels like the split second before it actually sets, and then get it into the tray at breakneck speed. And it’s all rather stressful. So if this is all new to you, go with the second option.

And make sure your tray is nicely greased with coconut oil beforehand, and then the moment your fudge has set, cut into squares. 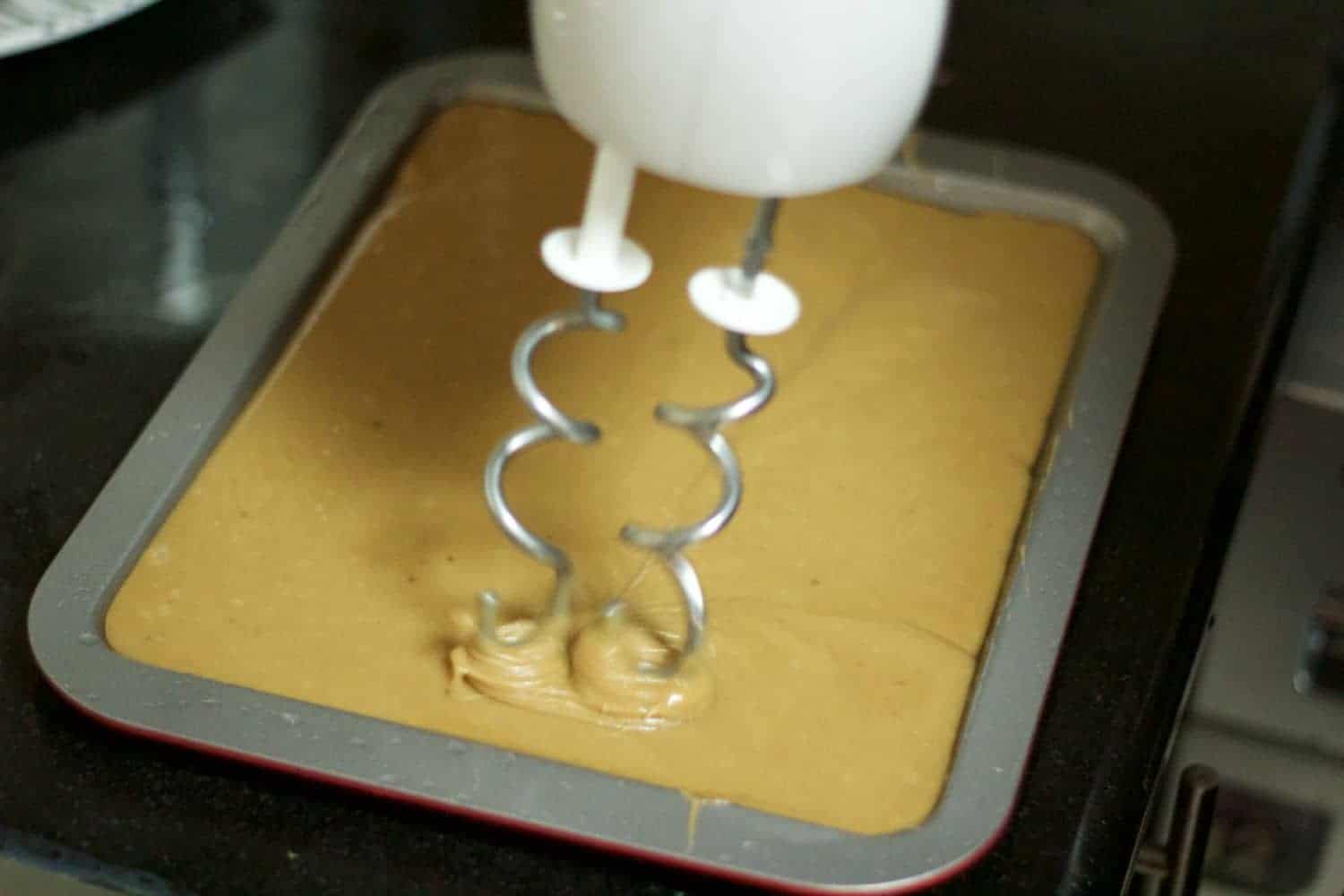 I do hope I haven’t put you off with all the talk about how complicated fudge making can be, really it’s pretty simple! Just 6 ingredients and a simple (if not exactly ‘easy’) method.

If you make this recipe, please let us know how it goes, rate it and leave a comment. And why not take a photo, tag it #lovingitvegan on Instagram, we’d love to take a look! 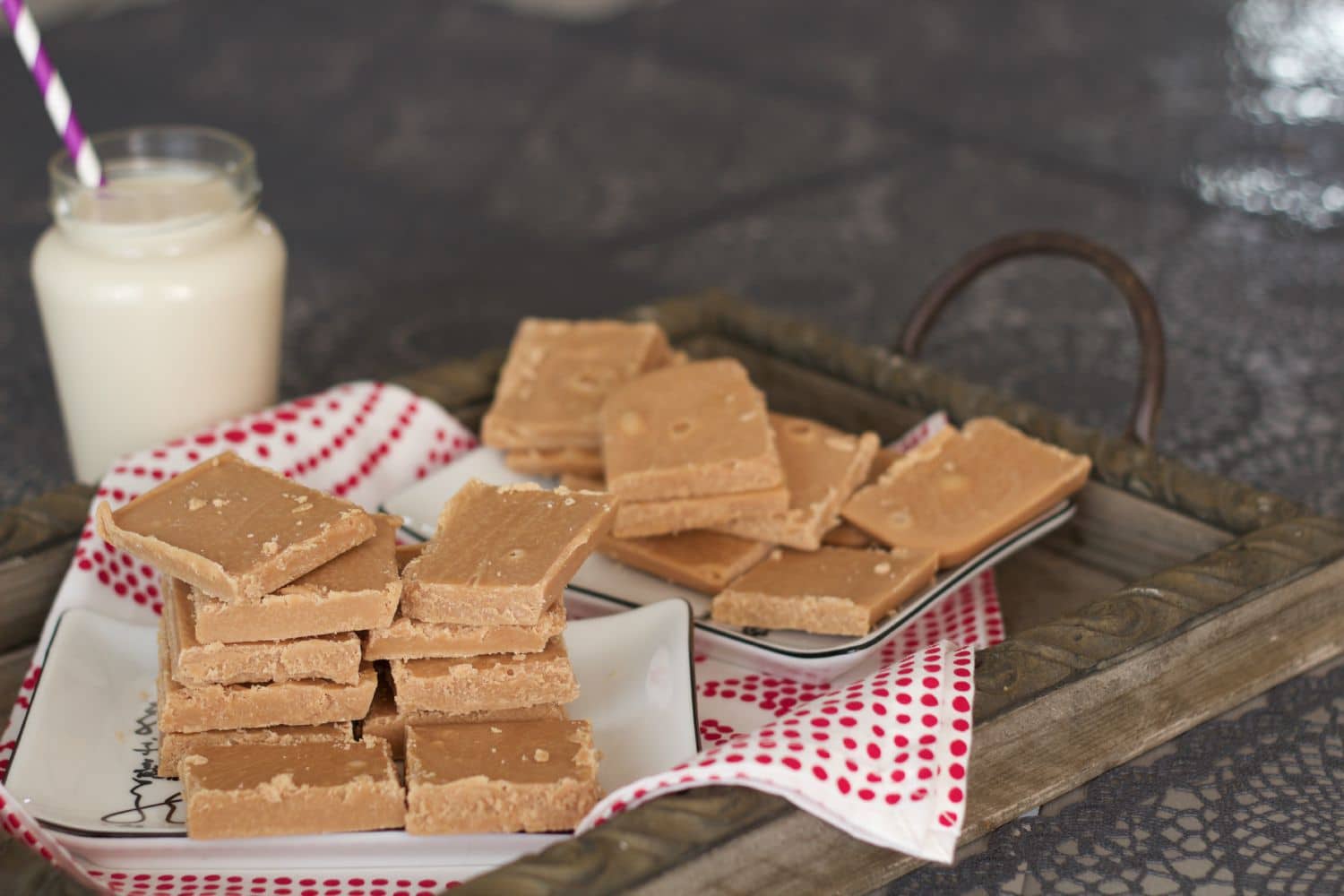 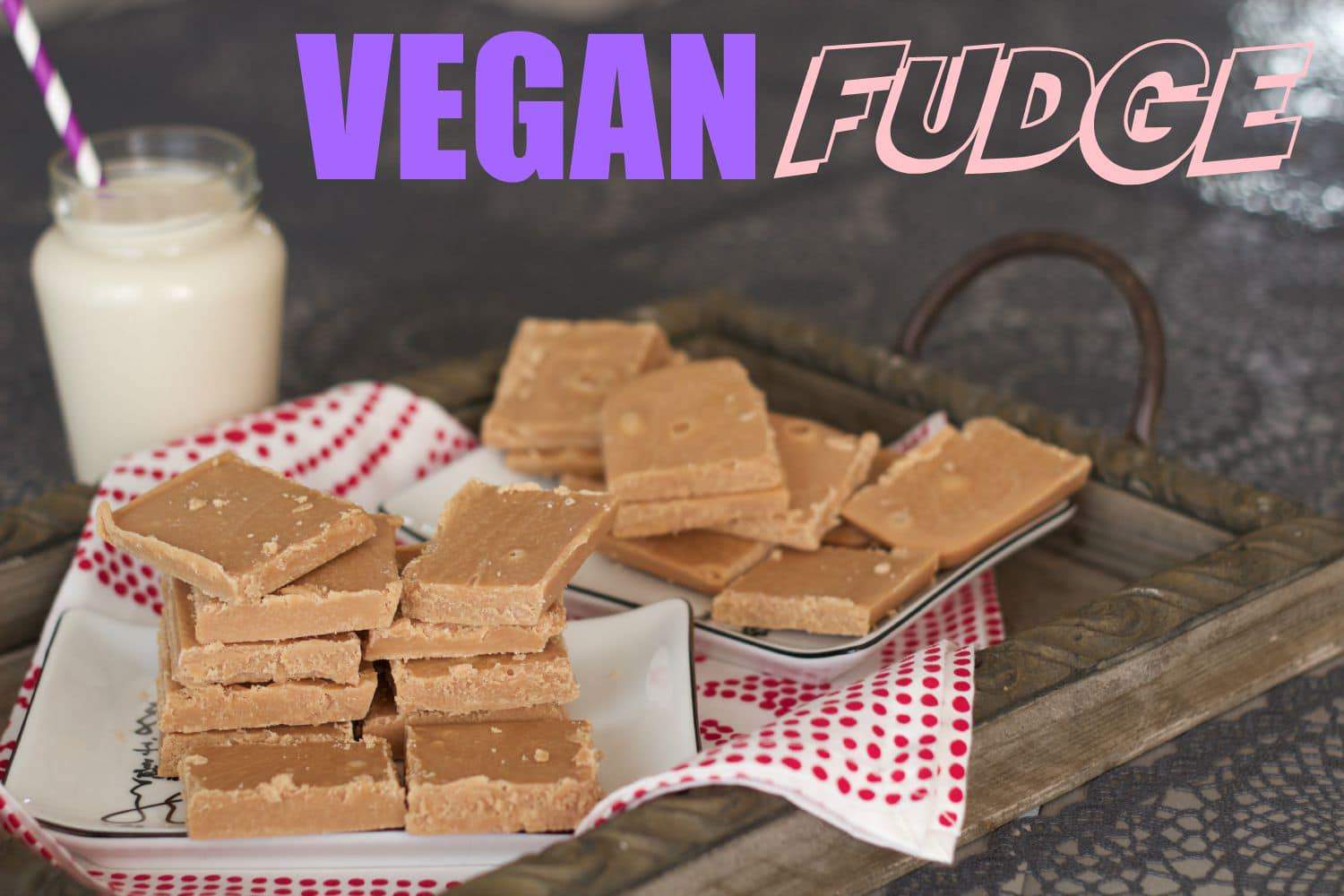 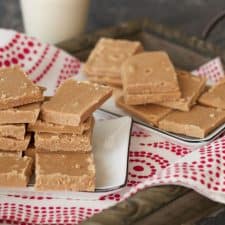 For the Vegan Condensed Milk: