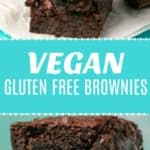 So we made simple vegan brownies, then we made triple chocolate vegan chocolate brownies and vegan zucchini brownies and now here we go with some super fudgy deliciously chocolatey vegan gluten free brownies!

I had to do a gluten-free version because many of our readers are gluten-free and a couple of my family members are too, and any excuse for another batch of brownies also just works great with me.

Sometimes adapting recipes for gluten-free can be tricky, but in this case, not at all!

These brownies adapted so easily and perfectly for gluten-free it’s not even funny. Or it is. Whichever makes more sense to say there. 😂 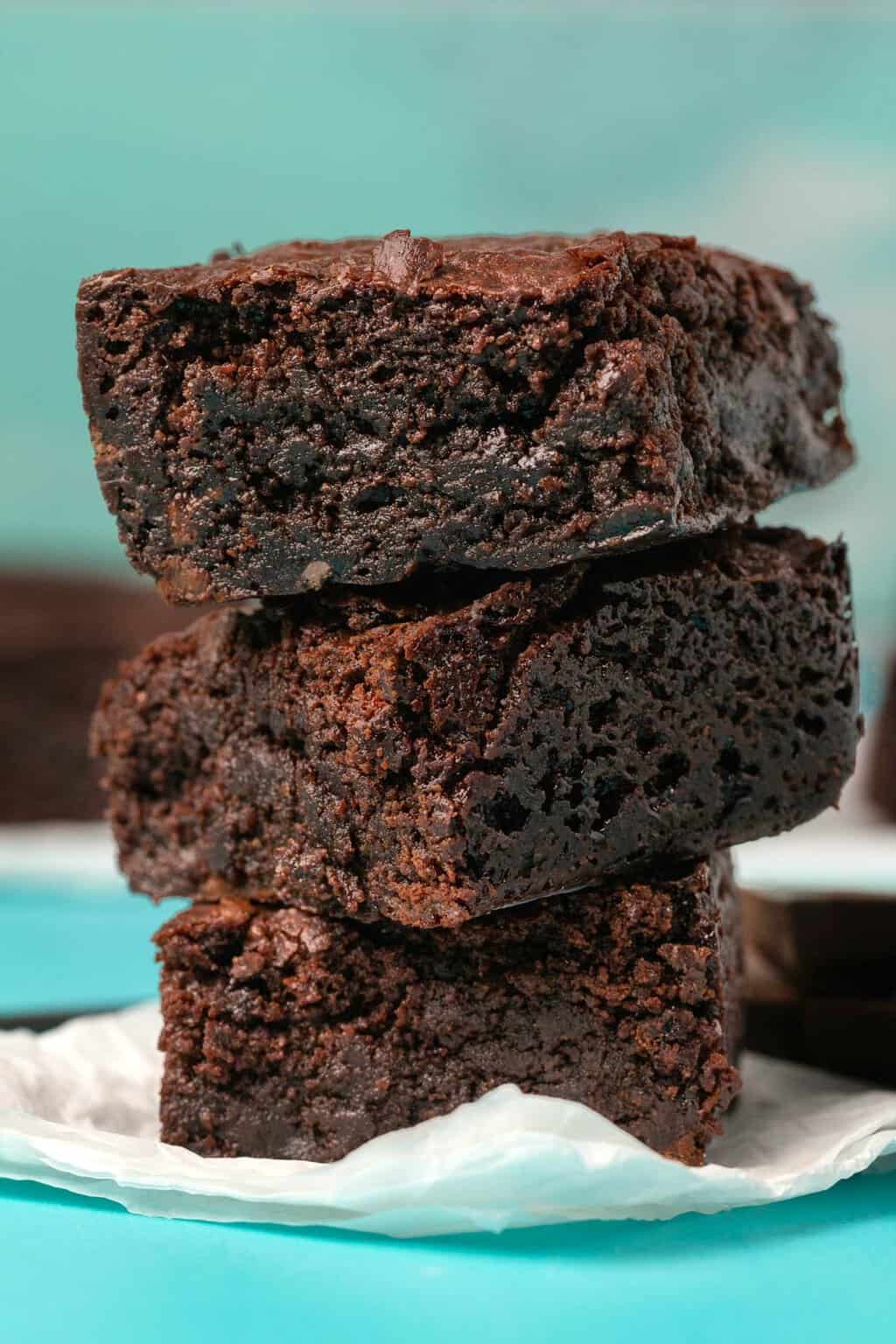 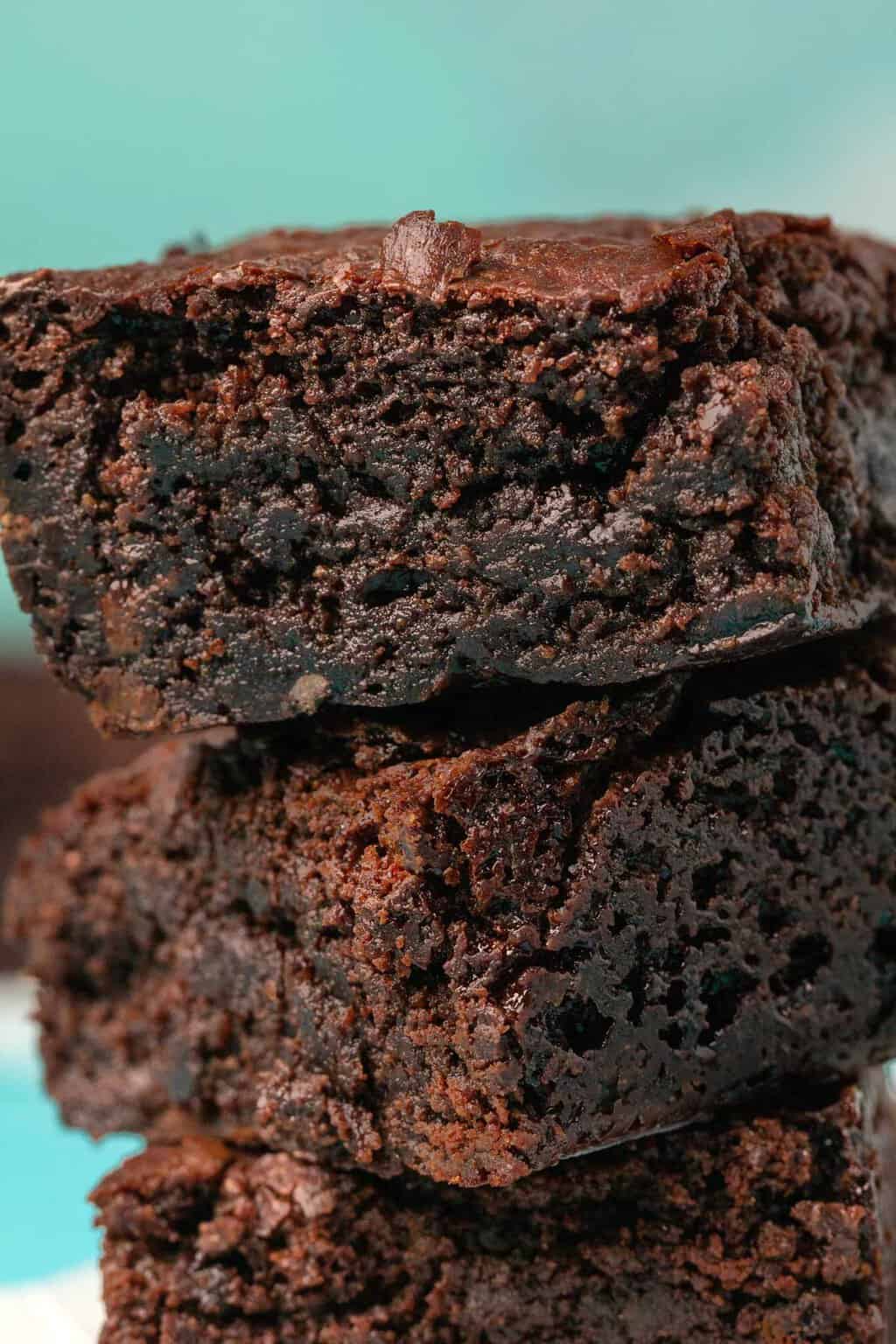 For these brownies we used a gluten-free all purpose flour blend.

So we start off by adding some gluten-free all purpose flour into a mixing bowl (no need to sift the flour first) along with some cocoa powder, sugar, baking powder, salt and instant coffee powder (brings out the flavors even more!).

Mix that up. Then prepare some vegan buttermilk by adding 1 tablespoon of lemon juice to a measuring jug and then adding soy milk up to the 1 cup line.

Add in the vegan buttermilk, some melted coconut oil and vanilla extract and mix into a thick batter (very thick!). 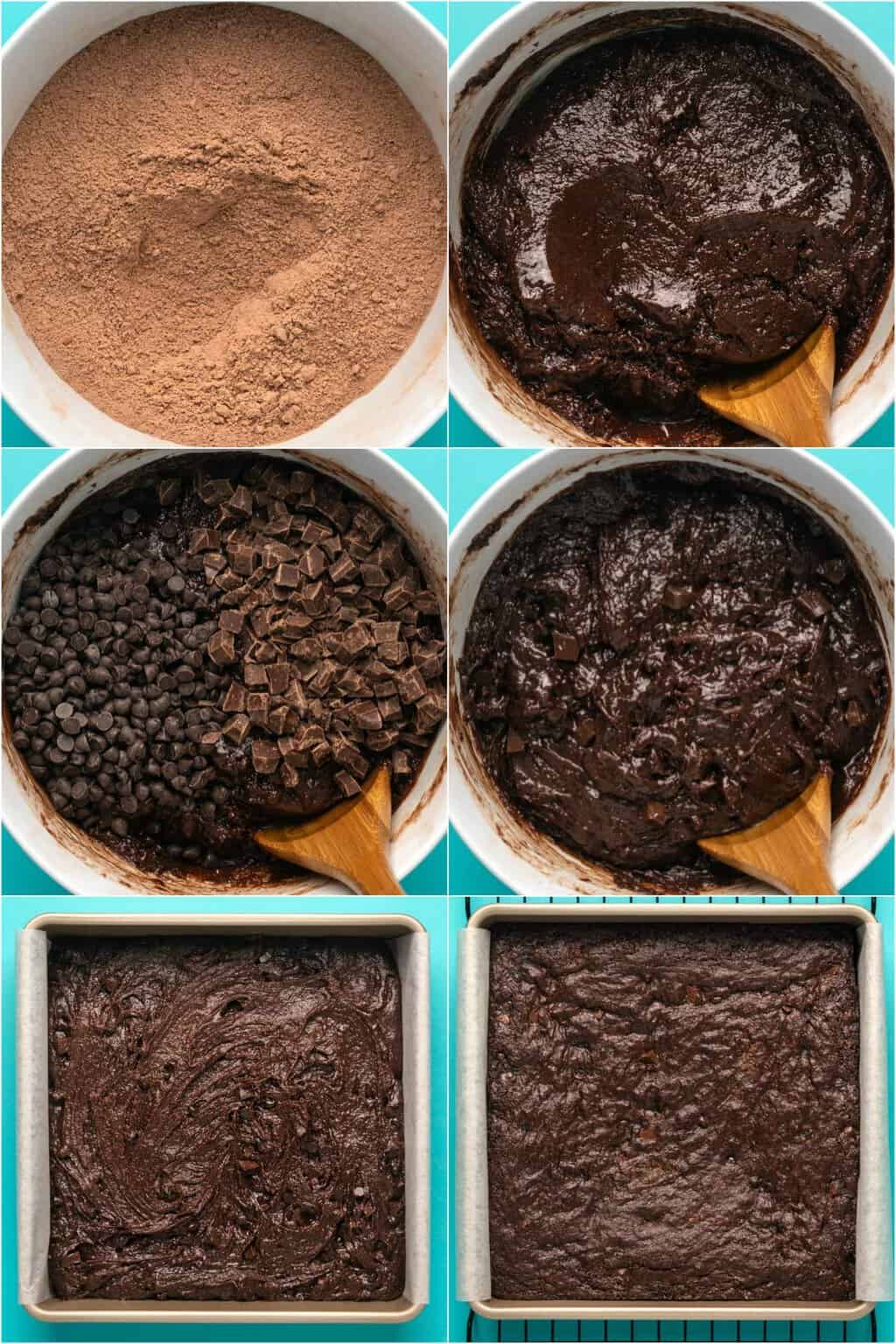 Prepare a square 9×9 inch baking dish by spraying with non stick spray and then placing parchment paper along the bottom as well as overhang over the sides so that you can easily lift out the whole tray of brownies once baked.

Bake for 40 minutes at 350°F. Let them cool for about 15 minutes in the pan and then lift them out with the parchment paper and place onto a wire cooling rack to cool completely.

And then you cut perfect neat slices by heating up a knife by dipping it in super hot water and drying it off with a paper towel and cutting, and then repeating until you have perfect squares.

The hot knife also melts the chocolate as you cut, so it’s even more perfect!

You can eat these brownies cold or heat them up in the microwave, however you enjoy them best. 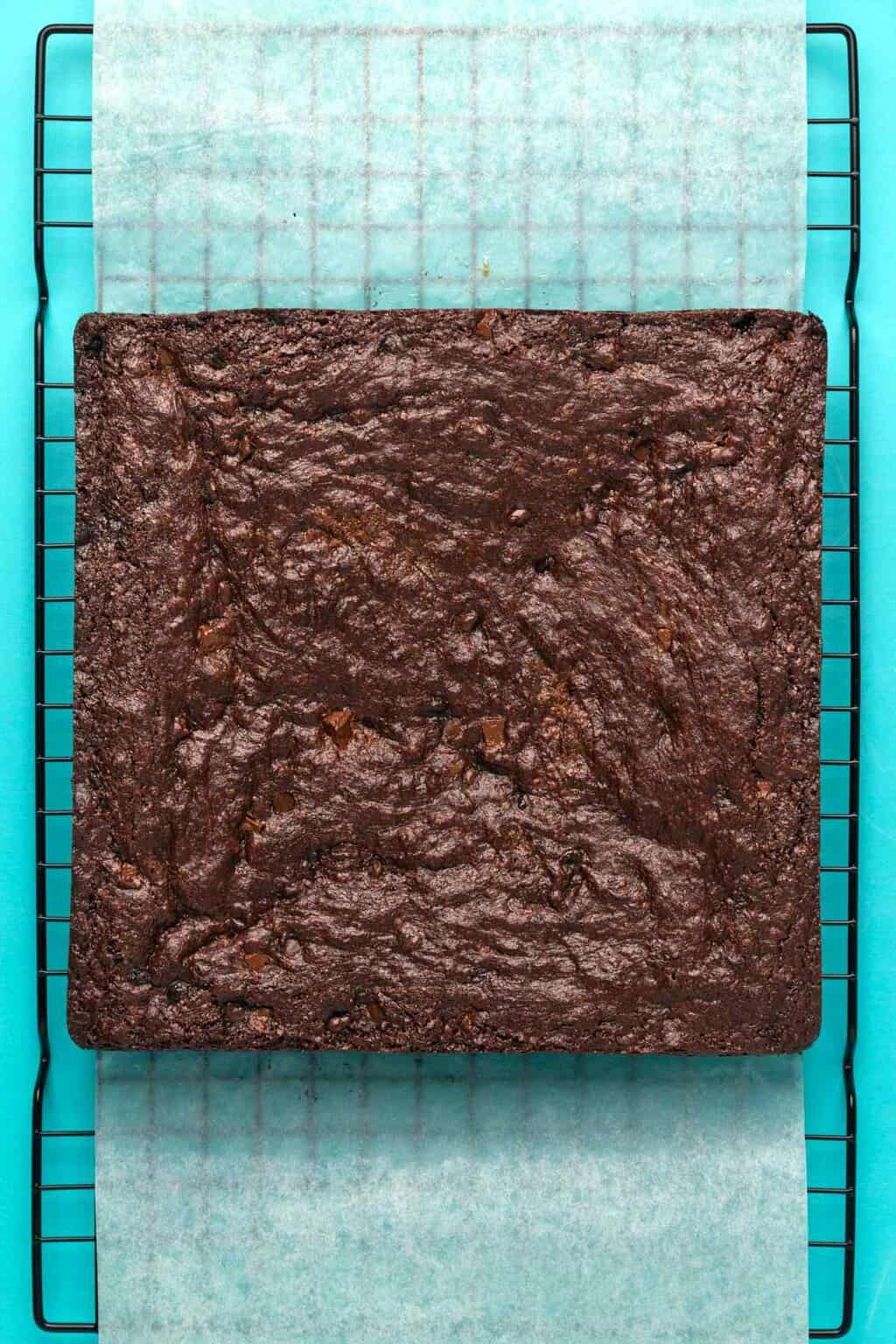 This recipe has not been tested with any single type of gluten-free flour like almond flour or coconut flour or rice flour, but my previous baking experiments lead me to believe that it would not work here.

Stick to a blend that is meant for this purpose and you’ll be golden.

I originally used brown sugar in this recipe but brown sugar can be a little more tricky in that it can weigh down your baked goods. So I now recommend using white sugar, or a mix of the two sugars, so you get a texture that isn’t too heavy.

Melted coconut oil is great for this, because it thickens up in the batter when stirred in, so you have a really thick batter which, along with the vegan buttermilk, helps to keep your chocolate chips and chocolate chunks evenly dispersed and keeps them from just sinking to the bottom. However, if you have a coconut allergy, you can use a different oil and it won’t be an issue.

The vegan buttermilk is ideally made with soy milk. You can use almond milk if you have a soy allergy, but soy milk is more ideal as it creates a really great texture. 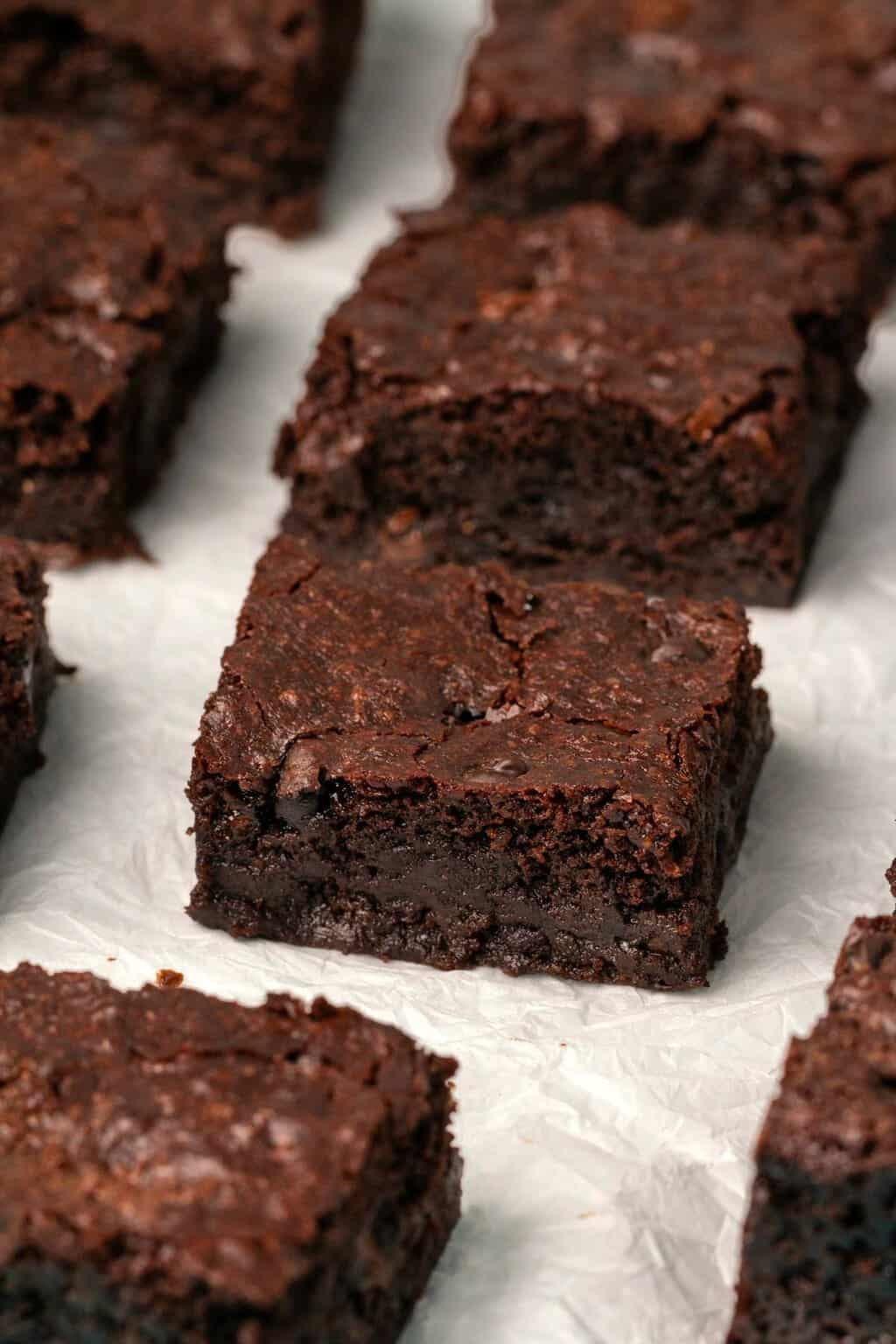 Just about the time I first posted this recipe I got some feedback that the brownies tasted good but were very wet in the middle, like pudding!

That definitely was not my result but nonetheless I had a moment of doubt and so decided to re-test the recipe just to make super sure that I hadn’t made any crucial error.

At the same time we had just moved house and I had a brand new oven to deal with. I made two batches of brownies and had the same result as the reader feedback – WAY too soft in the center, like pudding! No structure!

I was panicked. I was about to take this recipe down! I was also so confused, because how was this happening. Hahaha, luckily, before I did anything so dramatic as to take the recipe down, I remembered my own advice, which is that ovens can vary dramatically! I had spent some significant time with my previous oven getting to know it and using an oven thermometer to know how it differs from the temperature it says it is on the dial. So I needed to do this again with my new oven.

So I got out my oven thermometer and checked my oven temperature. Well….. it was a full 30°F (15°C) COLDER than it was supposed to be/set to be. So after I adjusted for that, and left my oven thermometer in the oven and watched my brownies cook the whole way through, making sure the temperature was correct all through, then they were pure perfection. I was relieved beyond belief.

So… check your oven temp if you are having any problems with recipes, it can be a very simple solution. But if you do end up with brownies that are way too soft in the middle, put them back in for longer.

They are supposed to be fudgy but not wet.

How to tell when your brownies are done!

The toothpick test can be a little tricky because you have chocolate chips and chunks inside these brownies creating little pockets of melted chocolate everywhere.

But the top should be entirely dry, and look a little cracked (like our pics) and if you put the toothpick in you should come out with only melted chocolate, not wet batter. It also should feel soft but firm. It should not be wet or super jiggly. 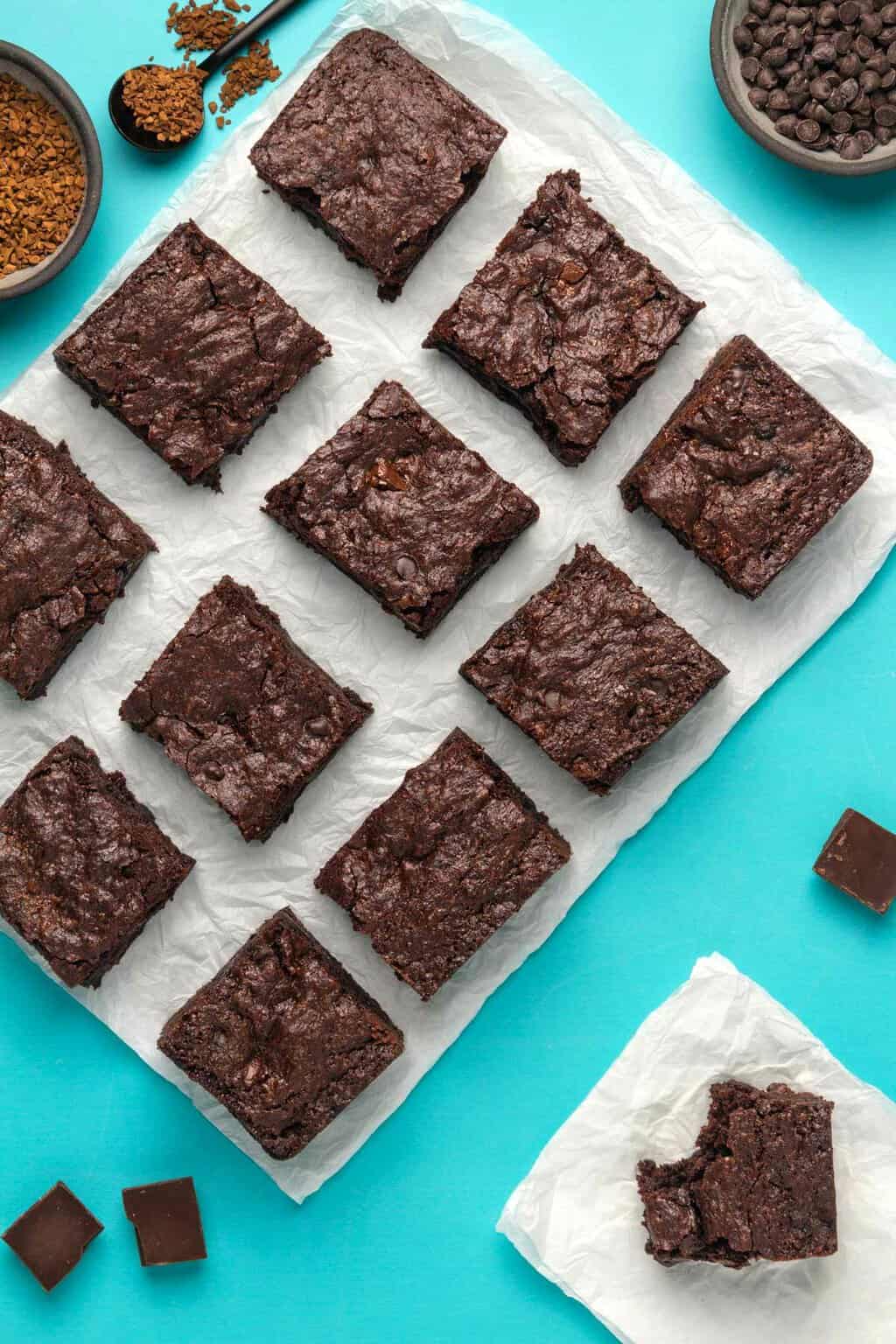 You will love these vegan gluten free brownies! They are:

Keep them covered at room temperature where they will keep for 3-4 days. You can also keep them in the fridge if you want them to last a little longer. They are also freezer friendly for up to 3 months! 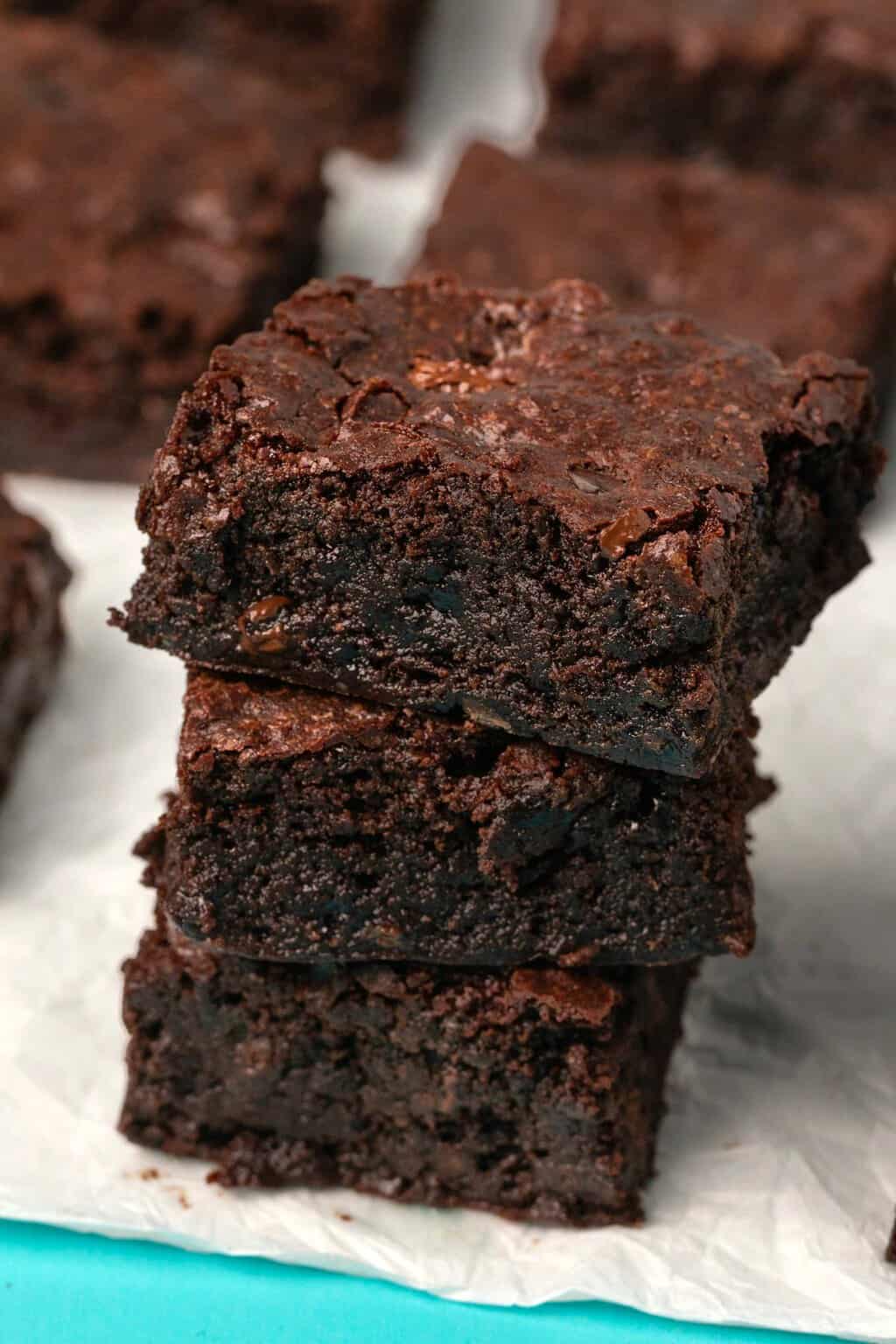 So let us know what you think of these vegan gluten free brownies in the comments and please rate the recipe too, thanks so much!

Sign up to our email list and we’ll send you an awesome (and free) recipe ebook containing 10 delicious vegan dinner recipes. You’ll also be the first to know when new recipes are posted to the blog. 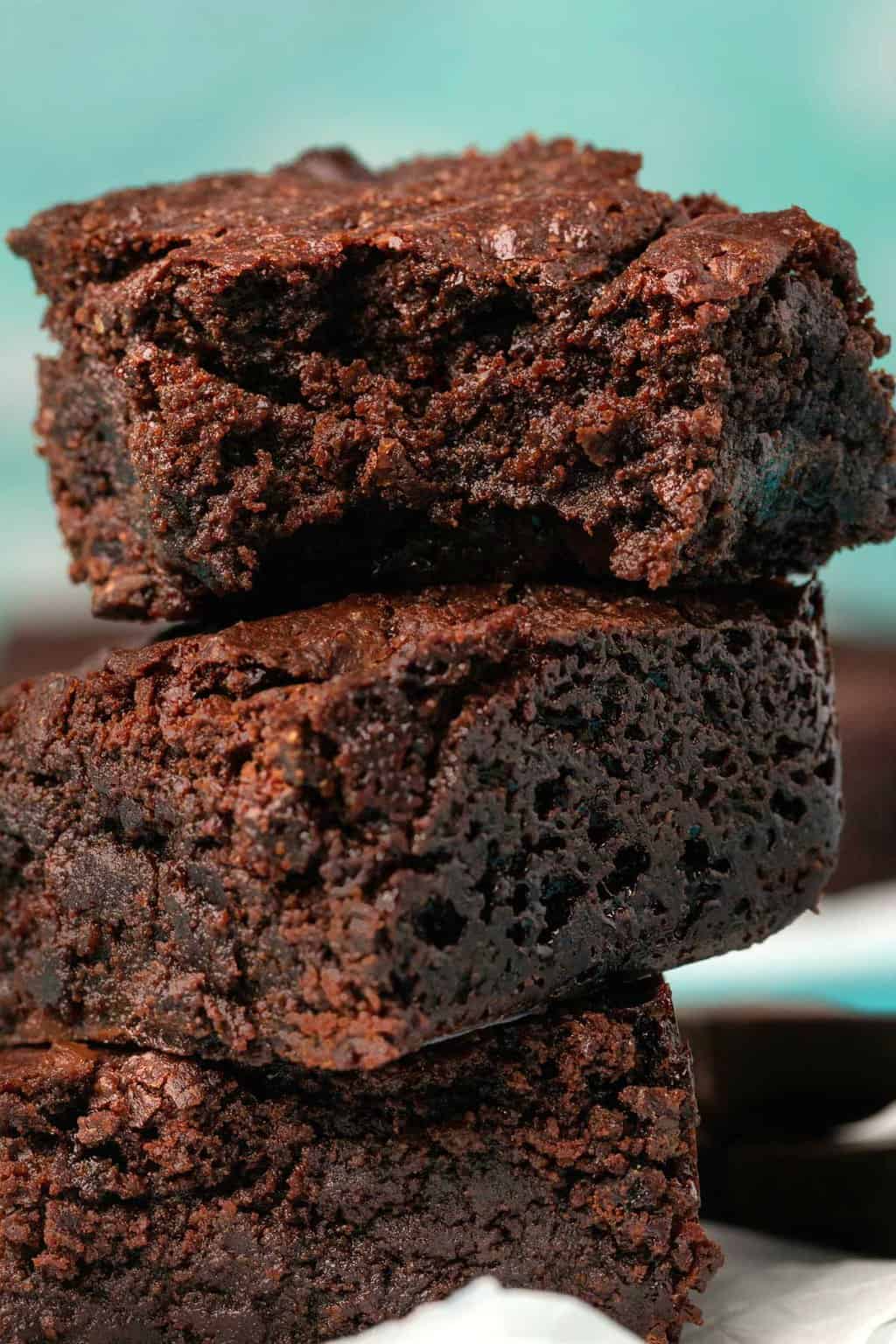 *For the most accurate results weigh your flour. I have tried this with different blends, so any gluten-free flour blend that is meant for baking should work great here.

*I previously used brown sugar for this recipe, but now recommend using white sugar or a mix of the two sugars. The reason being that brown sugar can be a little heavier on baked goods. To make these as fail-proof as possible the lighter texture of white sugar works out better.

*The instant coffee powder can be omitted if you don’t want to use it. It does bring a little something extra to the flavor though but some may find it too strong as a flavor component.

*You can also use almond milk to make vegan buttermilk, however I prefer soy milk for this as it creates a thicker buttermilk, but if you can’t use soy, almond milk will work fine.

*You will know the brownies are done when the top is completely dry and looks a little cracked (as in our pics) and if you put a toothpick in you should come out with only melted chocolate, no wet batter. It also should feel soft but firm. It should not be wet or super jiggly. If it is wet and jiggly then it isn’t done yet and the chances are high that your oven is running a little cold (see my blog post for more info).

Loving It Vegan is a participant in the Amazon Services LLC Associates Program, an affiliate advertising program designed to provide a means for sites to earn advertising fees by advertising and linking to Amazon.com. This site may contain some of these links to Amazon.com. If you make a purchase through one of those links, Loving It Vegan will receive a small commission from the purchase at no additional cost to you.
Previous Post: « Vegan Banana Ice Cream
Next Post: Vegan Banana Cookies »