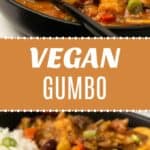 Fabulously hearty vegan gumbo with loads of flavor from a rich vegan roux and tons of veggies. Savory and delicious comfort food! 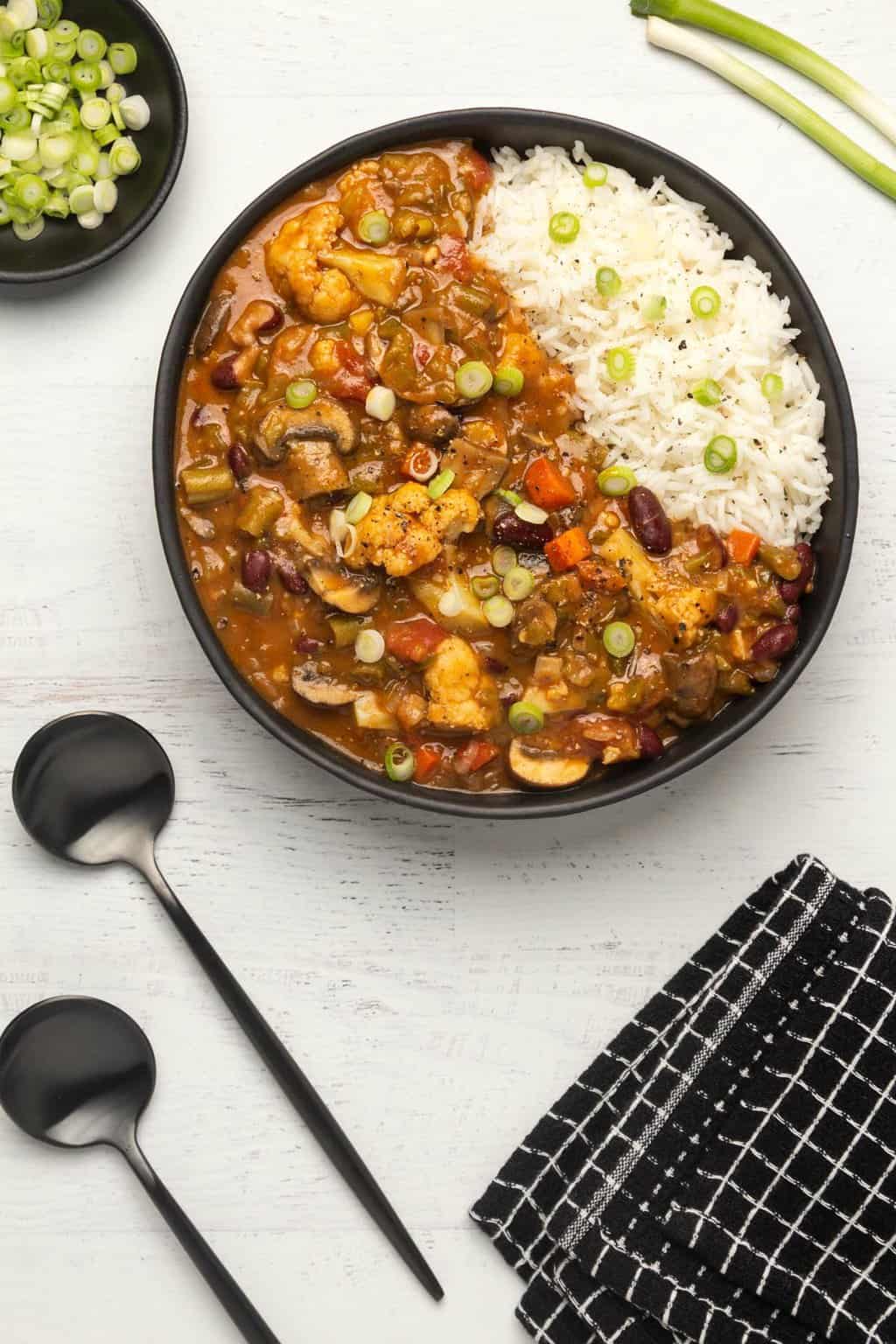 This vegan gumbo came about because a reader requested it (thank you!). I don’t know if I would have really tried to make a gumbo if I hadn’t received the request because it just wasn’t something that was on my radar very much.

I’m really glad it is now though. I set out to find out all about it, and Jaye and I had big fun experimenting with the recipe to get the perfect gumbo!

And this recipe is it. It’s extremely delicious, with a rich flavor that comes from a slow cooked roux and plenty of vegetables. 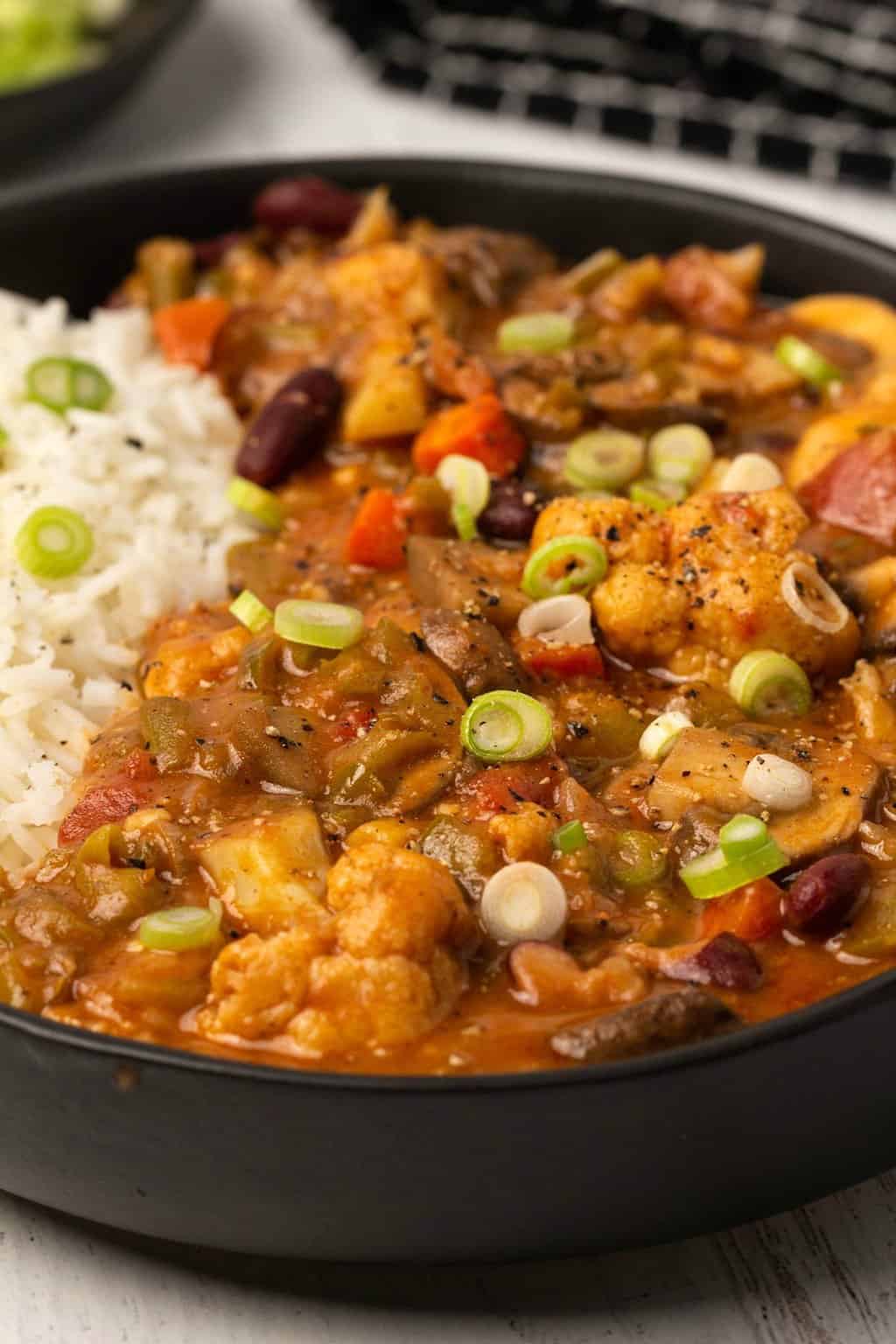 How to make Vegan Gumbo

The key to a good gumbo is the roux. You cook it long and slow until it reaches a milk chocolate color. It requires a bit of patience and a lot of stirring but it’s totally worth it.

Add some vegan butter to a pot. Let it melt over medium heat, and then add in the all purpose flour and stir it into a paste. And then keep stirring!

Over the course of about 20 minutes (if you’re on high heat) and around an hour on low heat, you keep stirring and watch that roux change.

It starts off as a thick paste (third pic in the collage below), and then starts to thin out, but the color stays the same. Gradually the color starts to change, so that eventually you have the color of milk chocolate.

The milk chocolate color is exactly what you’re going for and indicates that your roux is perfectly done.

If you burn the roux, you have to start again. So depending on the pot you’re using, you might well be better off taking the slow and steady approach.

Even if you start off at fairly high heat, keep a super close watch and be ready to turn down the heat at the smallest hint that it might burn. And stir non-stop.

Our pot is very heavy bottomed, so the chance of burning is lowered, so doing it at high heat wasn’t as much of a risk. All this to say, be careful and don’t burn it.

TIP: Vegan butter can be replaced with oil. However vegan butter is preferable for flavor in this dish. 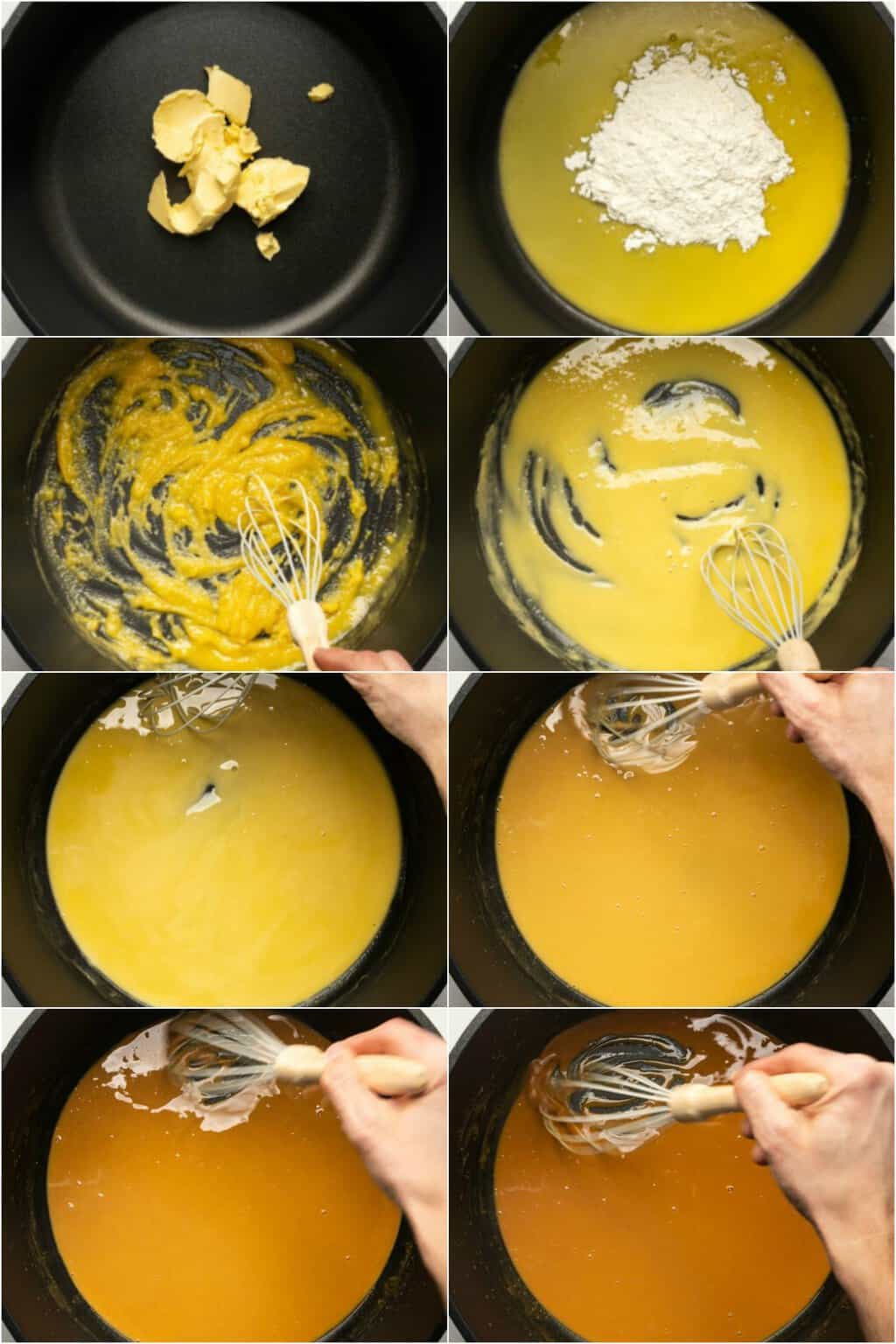 Once your roux is ready, then you add the ‘Holy Trinity’ of veggies! In Cajun cooking, this is finely chopped green bell peppers, celery and onion. Add that to your roux, stir in and cook until softened.

Then add in some vegetable stock and stir it in.

Next comes some frozen veg or okra – we would have used okra but could not find any, so settled for frozen mixed veg – cauliflower, mushrooms, garlic, cajun seasoning, liquid smoke and a bay leaf. Stir this in.

Add chopped tomatoes and kidney beans, stir in and then just let it all simmer away until everything is cooked and fragrant and totally delicious.

Season with some salt and pepper and serve! 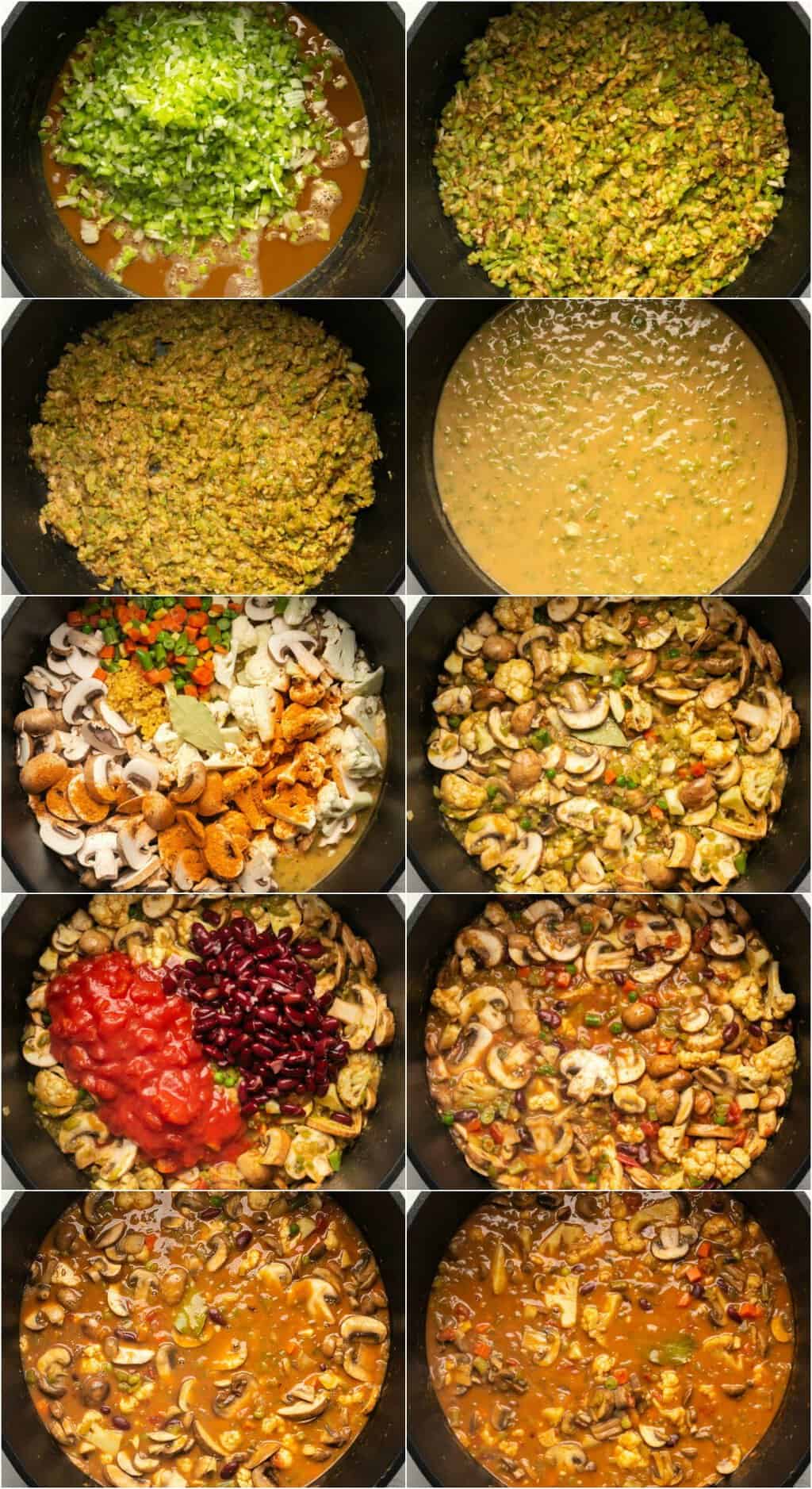 How to Serve Vegan Gumbo

Serve it with rice and some chopped spring onions (also known as green onions or salad onions or scallions) on top. This is the traditional way to serve it. Of course if you want to serve it with cauliflower rice that would be great too.

If you want to serve something on the side, then you can’t go wrong with some vegan cornbread or home baked whole wheat bread!

How to Store Vegan Gumbo

Keep leftovers stored in the fridge in a covered container and they will stay good for a few (3-4) days.

Can I freeze Vegan Gumbo?

Yes, you can freeze it!

Can I make this Vegan Gumbo Gluten-Free?

You can try using a gluten free all purpose flour blend instead of the regular flour to make your roux. Make sure you get it to the chocolate color the same way you would with the regular flour. 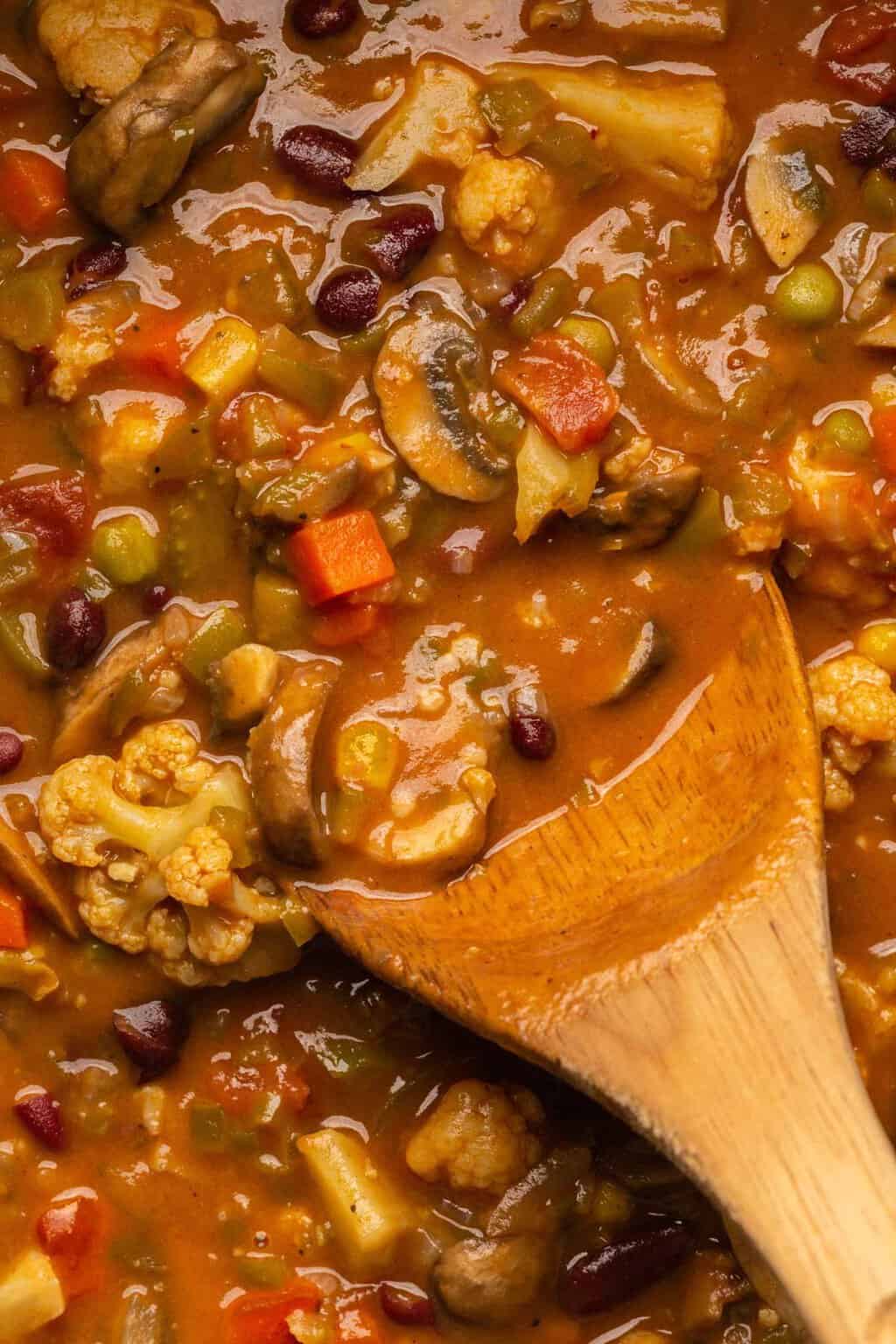 You will love this vegan gumbo recipe! It is:

It’s even easy to make. Don’t be intimidated by that roux, it’s actually really easy. 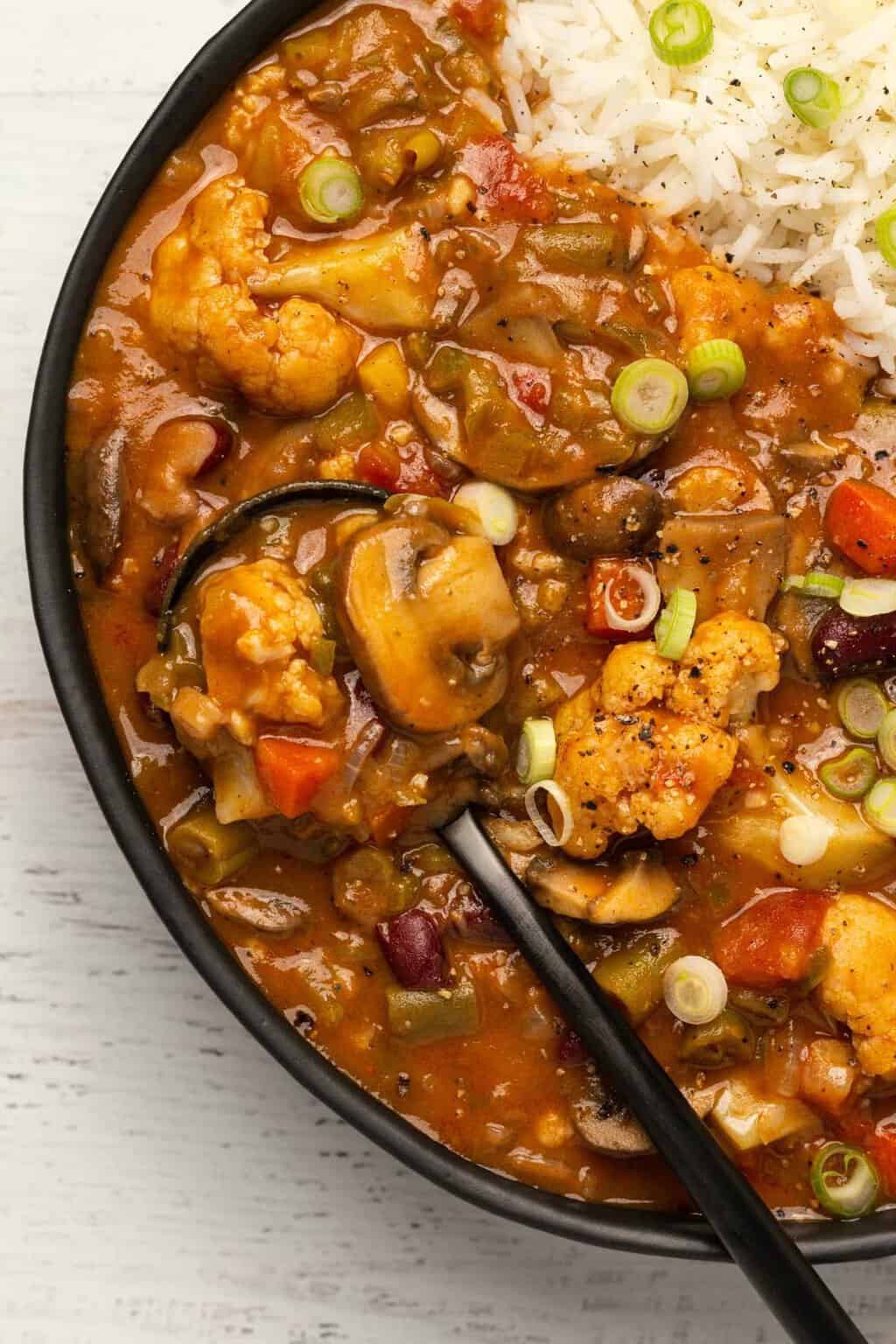 So let us know what you think of this vegan gumbo in the comments and please rate the recipe too, thanks!

Sign up to our email list and we’ll send you a gorgeous recipe ebook with 10 delicious vegan dinner recipes (entirely free). You’ll also be the first to know when new recipes are posted to the blog. 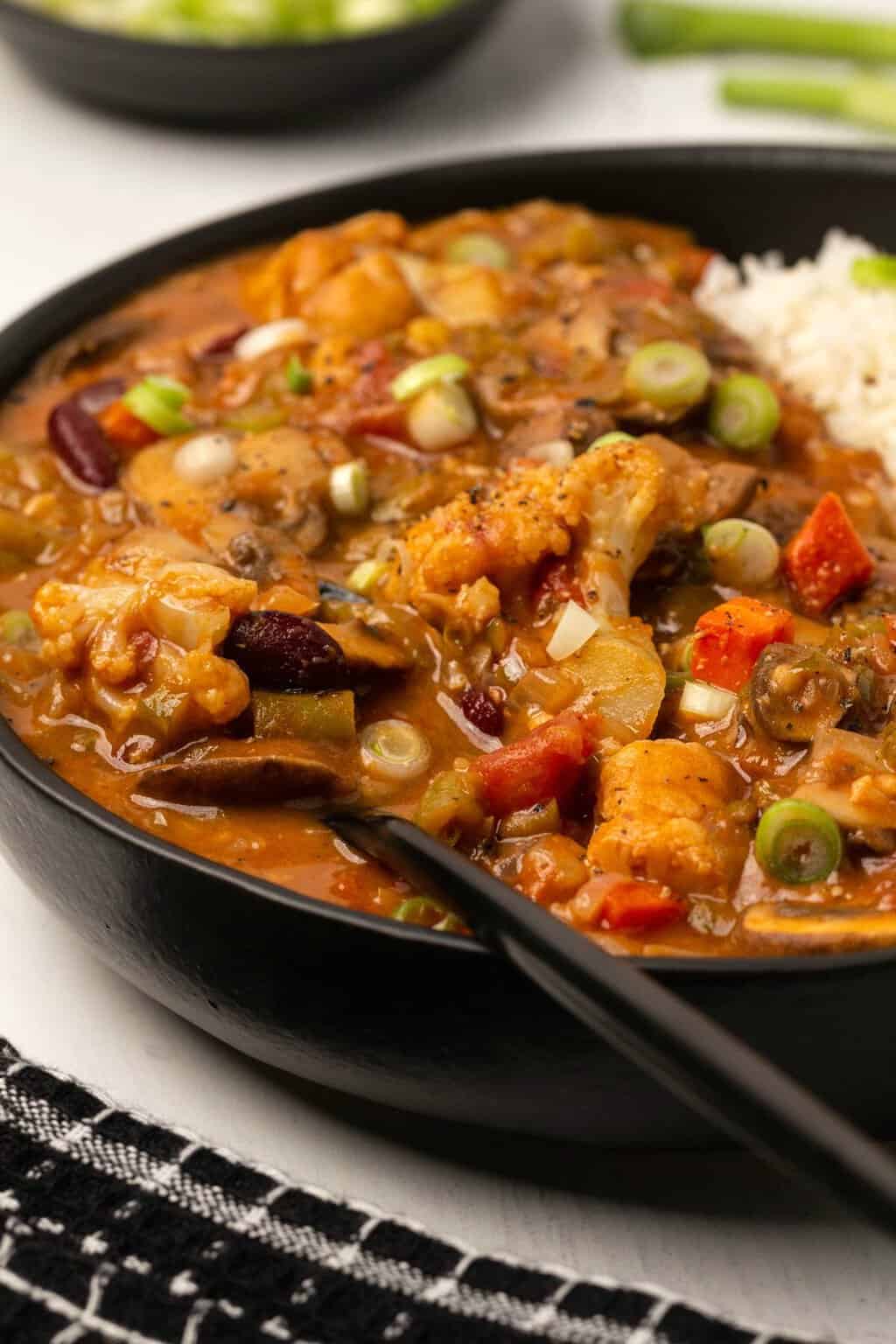 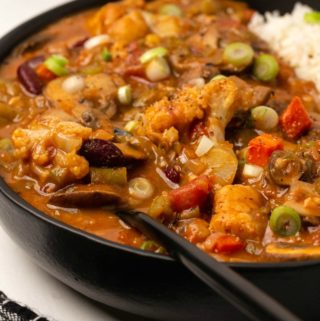