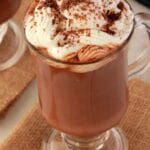 This vegan hot chocolate is rich and delicious and dessert in a mug. Made with simple kitchen ingredients. Perfect for cold nights.

You know what’s super amazing about this vegan hot chocolate?

Some chocolate shavings sprinkled on top of your vegan whipped cream don’t go amiss either. They look pretty and they add to the overall deliciousness. So really, it’s a winners move.

Maybe you’re asking yourself why you would make vegan hot chocolate from scratch, like…can’t you just buy a pre-made powder and mix it with some hot water, add some soy milk and voilà?

Well, sure you can. But it won’t be nearly as good as this!

This recipe uses melted vegan chocolate, cocoa powder and non-dairy milk to create the base recipe, and to that, a little brown sugar is added for extra sweetness.

It’s basically one step up from pure chocolate. You’re pretty much drinking liquid chocolate. That’s how good it tastes.

How To Make Vegan Hot Chocolate

It’s super easy. You just heat up some non-dairy milk in a saucepan with some cocoa, whisking all the while until simmering, and then add in some vegan chocolate and melt it in. Then you pour into two glasses or mugs, add brown sugar to taste and top with vegan whipped cream. And there it is – a taste sensation!

I considered two tablespoons of sugar to be perfect, one tablespoon per serve, but I like the sweet stuff, so that’s why it says ‘to taste’ in the recipe.

But let’s be real, this is a sweet recipe! It’s hot chocolate. It’s rich, chocolatey dreamy deliciousness. Feel free to top with vegan marshmallows too if you have some of those on hand.

It’s perfect for cold nights, or when there’s a little nip in the air, or you know, the wind is blowing a little. 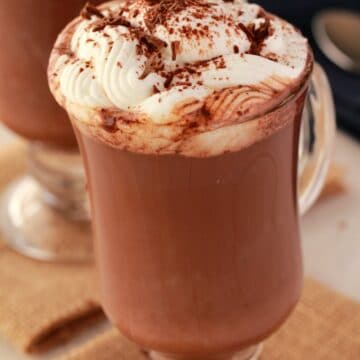 For the Hot Chocolate: