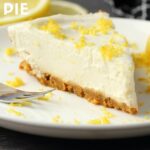 This vegan lemon pie started out as an idea for a lemon meringue pie.

But I must confess to not yet being brave enough to attempt the meringue part. Even though I have made vegan meringue, successfully, it’s not quite the same type of meringue as what you put on top of a lemon meringue pie, so I’m still daunted.

When thinking about it though I just knew I wanted to make a vegan lemon pie using vegan condensed milk. That recipe has been used in a ton of desserts on this blog now, it’s just awesomely versatile so I knew it would be good for this too.

So my hesitation in going the full monty with a lemon meringue pie instead became a fabulously delicious vegan lemon pie with a ginger cookie crust instead.

I had no idea when I set out to make this if it would work out or not, but the results were super impressive. It is pure creamy dreamy vegan lemon pie bliss!

You can either bake the vegan ginger cookies from scratch and then use those in this recipe, or you can use a store-bought vegan variety, either one will work great.

Crush them up, mix with a bit of melted vegan butter and press down into your pie dish for the base.

Pour this out over your ginger cookie crust and then allow to set for several hours (or overnight). Decorate with lemon zest and you have a lemon pie to remember!

The filling firms up very nicely in the fridge, but it’s still sort of a mousse-like texture. If it’s a bit too much on the soft side, then let it firm up in the freezer for a bit before serving.

Also, the stiffer you can get your whipped coconut cream, the better for this recipe. So if you open your cans of coconut cream to scoop off the cream from the top and it has hardened nicely in the fridge then you know you are going to get some really great whipped cream from those. If it hasn’t, you can still whip it, but it’s hard to get it very stiff. If this happens, then add in ¼ tsp of xantham gum as a fix. It will thicken it up very fast! So go slow.

Keep the pie stored in the chilliest part of your fridge (covered) so that it remains nice and firm and consume within a week.

It’s also freezer friendly if you’d like to freeze it. 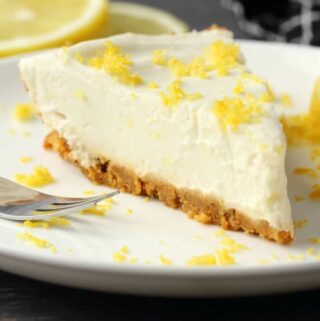 For the Lemon Pie Filling: