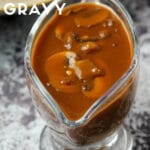 This vegan mushroom gravy is packed with mushroom flavor and totally divine poured over absolutely everything. Rich, creamy and perfect.

It’s creamy and rich and packed with mushroom flavor.

It’s divine over mashed potatoes or rice or vegan roasts or anything at all really.

Making this mushroom gravy is super simple too. Even if you’re not usually much of a cook, you’ll be able to impress everyone with your fabulous gravy making skills when you make this.

The recipe is based on our recipe for vegan gravy and with just a few small adjustments turns that recipe into a delicious vegan mushroom gravy.

How To Make Vegan Mushroom Gravy

The full measurements and instructions can be found in the recipe card at the bottom of the post. This is just a summary of the process to go along with the process photos below.

The color is a beautiful rich deep brown. The color comes from using dark soy sauce in this recipe. If you use a regular (light) soy sauce variety the color will be much lighter. You might prefer a lighter color, and if you do then be sure to use a light soy sauce instead.

I’m a fan of the deep dark rich tones of this gravy so dark soy sauce it is. I also really love the flavor of dark soy sauce so that is also a factor.

No it doesn’t! We used coconut milk (canned, full fat, unsweetened) because it’s deliciously rich so was a great fit for a rich gravy. But if you have an allergy to coconut or otherwise don’t enjoy it, then you can make this with a different non-dairy milk, such as soy milk.

Can you skip the mushrooms?

If you don’t like mushrooms, then definitely make our other vegan gravy recipe (no mushrooms in that one!).

This vegan mushroom gravy would be totally divine poured over a vegan meatloaf or a vegan nut roast.

It’s also amazing served with vegan mashed potatoes or vegan cauliflower mashed potatoes. And of course if you want to pour some over your vegan steaks that works great too!

Leftovers keep very well in the fridge for 3-4 days and can be reheated on the stovetop or in the microwave.

If you want to freeze it, then let it cool completely and place into an airtight freezer safe container. Let it thaw and reheat in a saucepan. 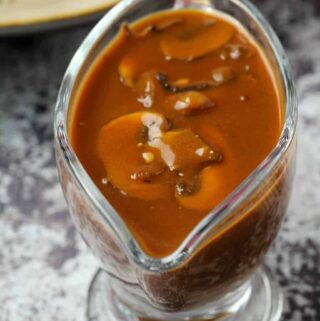