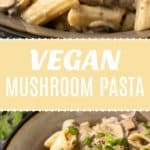 Rich and creamy vegan mushroom pasta. Packed with mushrooms and mushroom flavor and ready in 30 minutes or less. The perfect weeknight meal. 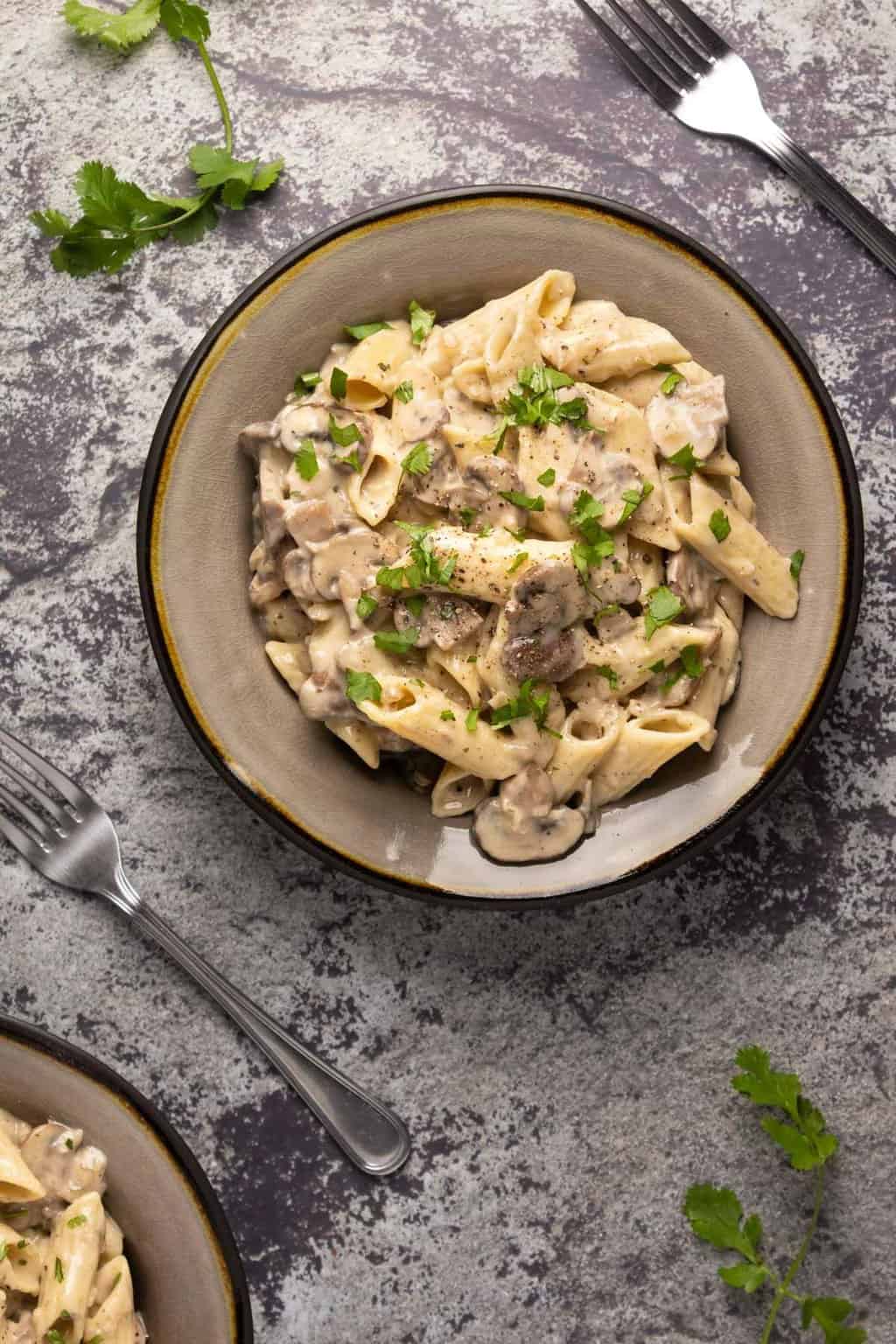 This vegan mushroom pasta is completely delicious, loaded with mushrooms and creamy to the max!

It was inspired by our recipe for vegan mushroom stroganoff which was a total hit.

Our stroganoff recipe uses vegan sour cream for that signature tang, but I was inspired to make a version where it’s also all about that mushroom flavor but instead of the sour cream tang, made in more of the style of a bechamel sauce, but with coconut milk!

And either way it totally works and it’s also so easy and quick (ready in 30 minutes) that you’ll want to make it on the regular. 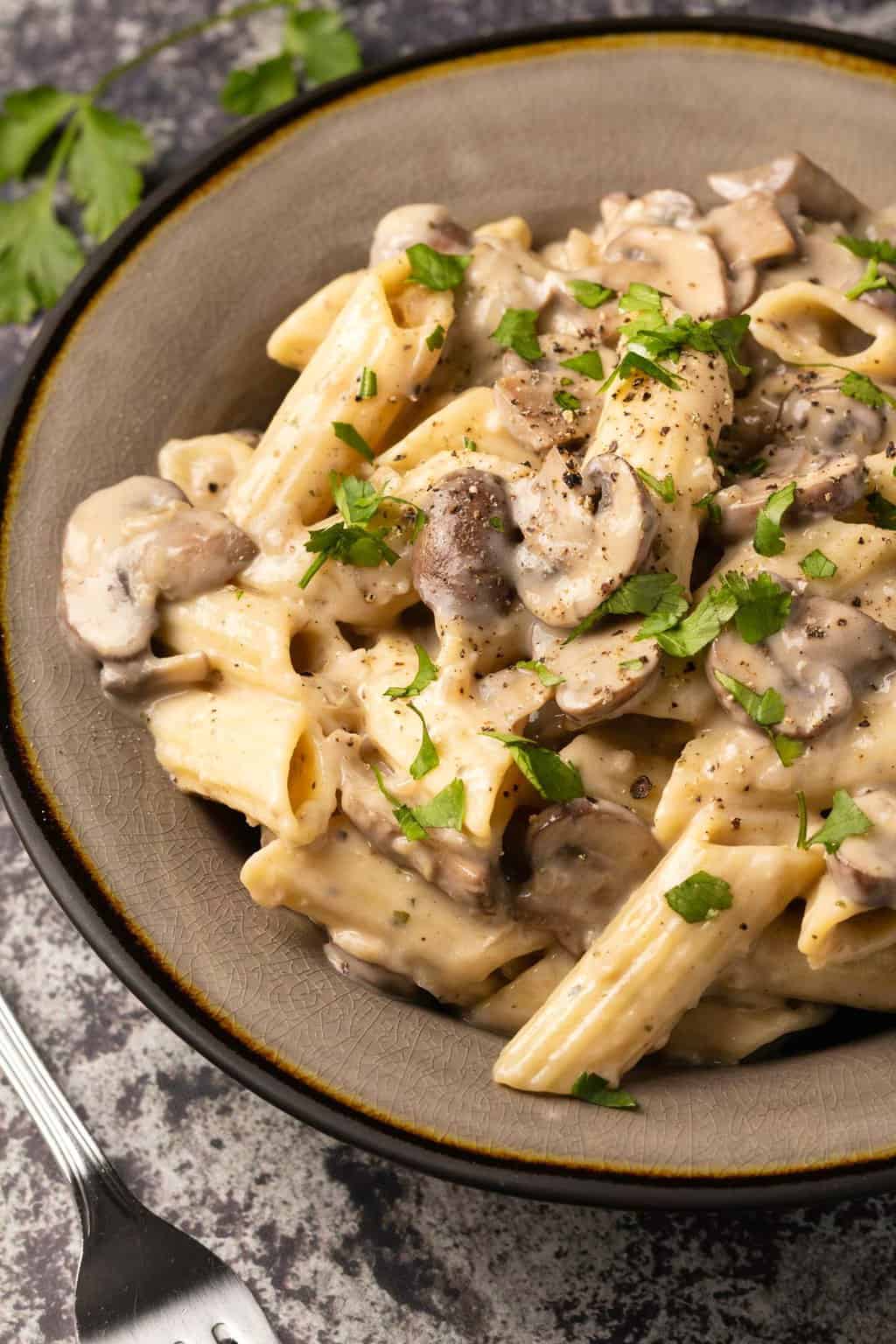 How To Make Vegan Mushroom Pasta

Add vegan butter to a pot along with some chopped onions and fry until the onions are softened.

Then add in sliced mushrooms, crushed garlic and oregano and fry until the mushrooms are softened.

Then add in some all purpose flour and fry with the mushrooms for around 1 minute before adding coconut milk and vegetable stock. Stir in until combined and then keep stirring until it reaches a simmer. It will usually be the perfect thickness by the time it reaches a simmer or soon after.

Add in some salt, black pepper and dijon mustard and stir in.

Cook up some pasta of your choice (we used penne) and then add it in with the sauce and mix in. 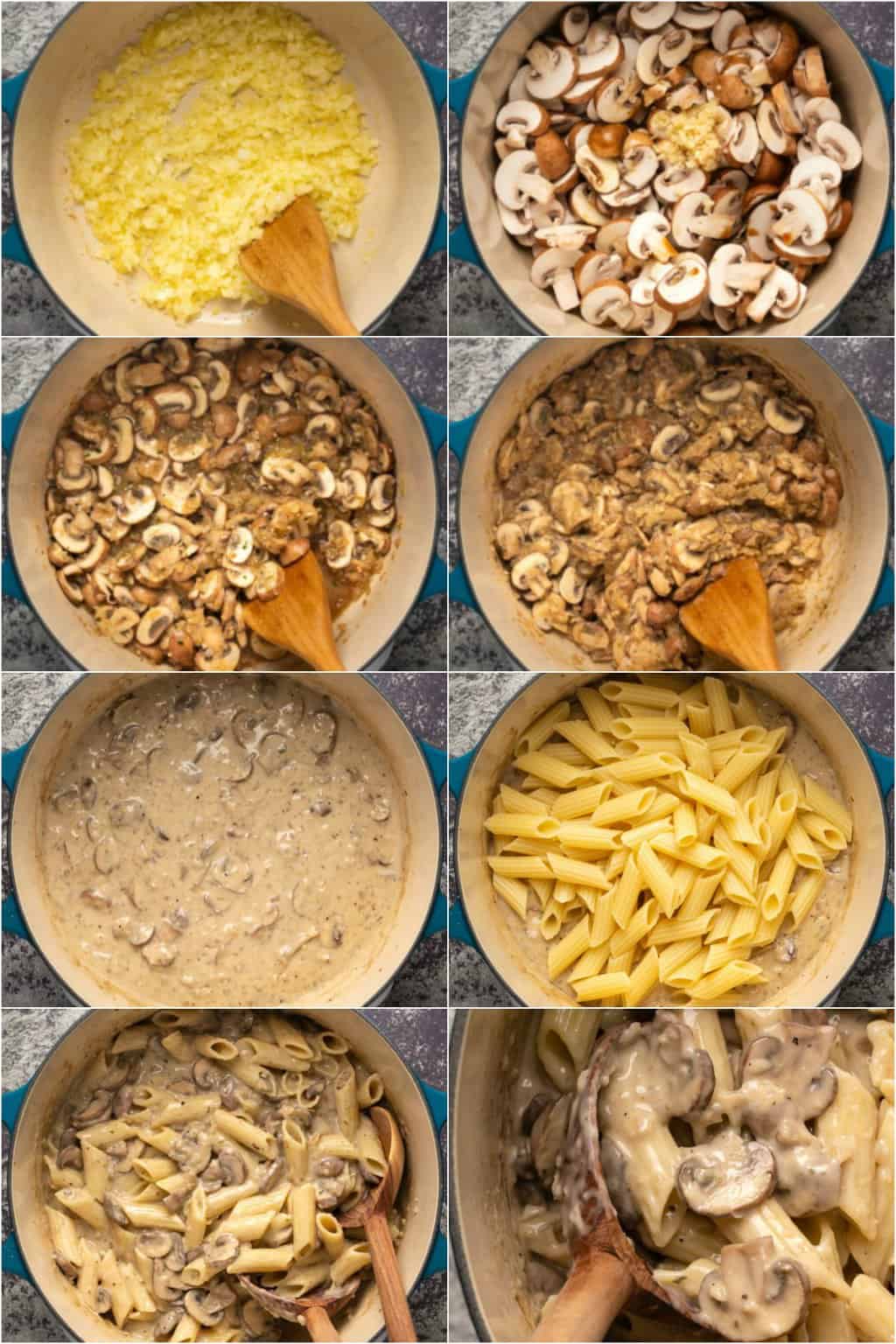 Use full fat canned coconut milk. In the past I have received comments from people saying they tried a savory recipe of ours that uses coconut milk but the coconut milk was too sweet making it clash with the savory flavor.

I was at first SOOO confused until I realized they were using the completely wrong coconut milk and that there is such a thing as sweetened coconut milk – definitely don’t use that one!

Canned coconut milk is unsweetened! It has no sugar and it is full fat. This is always what I mean when I say coconut milk. Don’t ever use some sweetened stuff in a carton, that’s not it at all.

Serve with chopped cilantro and a sprinkle of black pepper for a really impressive looking dish! 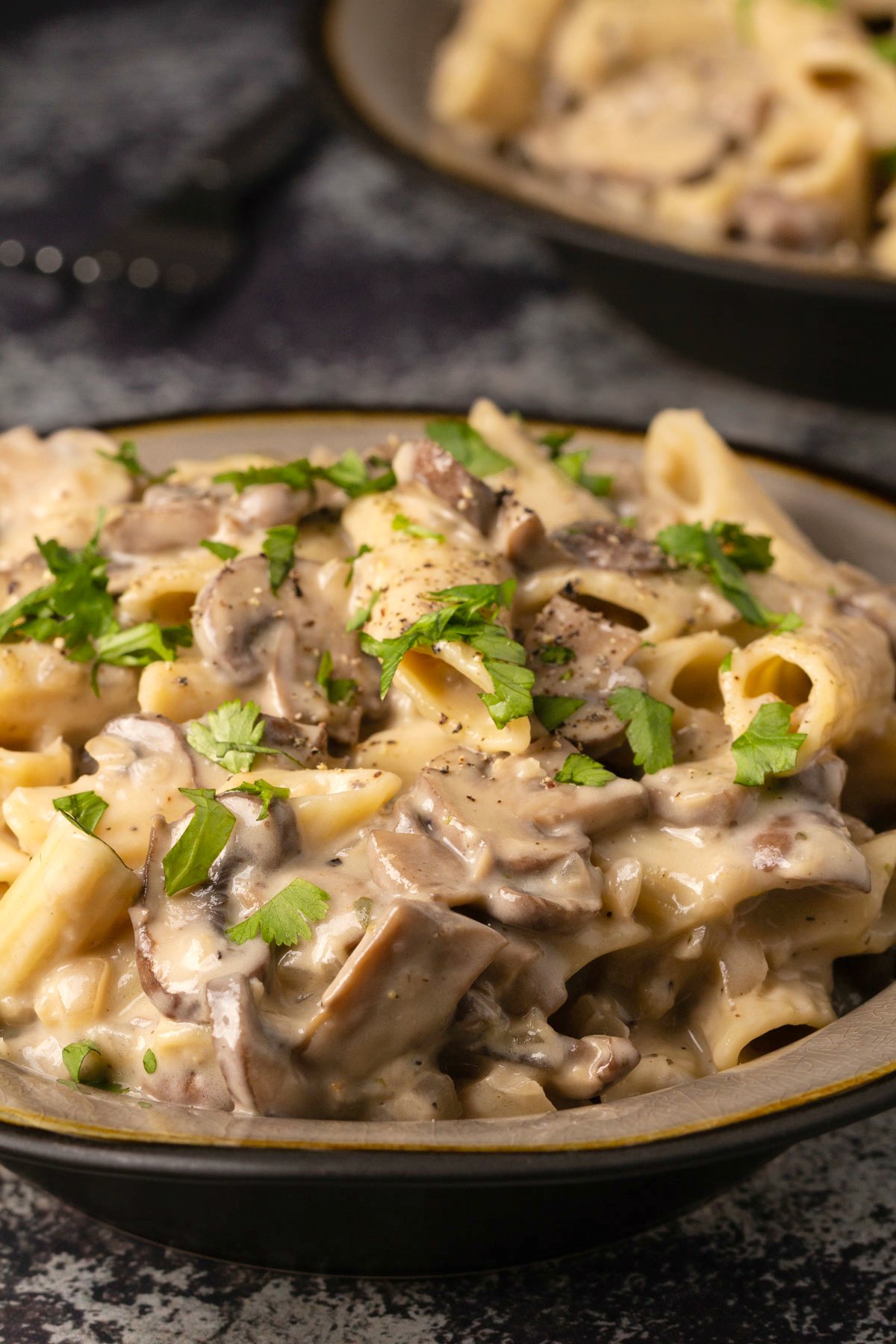 Keep any leftovers stored in the fridge, covered. They will keep for 3-4 days. Reheat in the microwave. 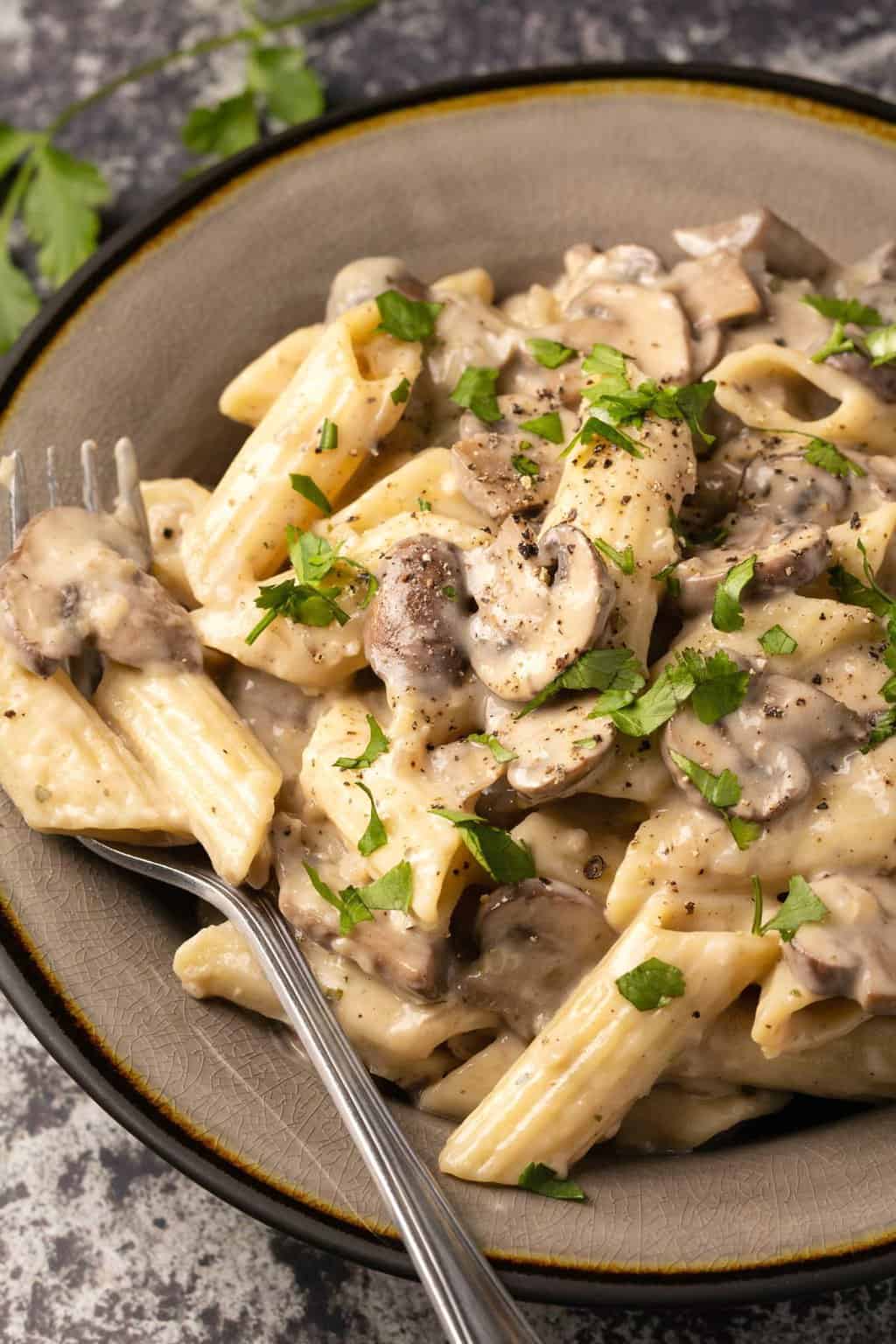 So let us know what you think of this vegan mushroom pasta in the comments and please do rate the recipe as well.

Sign up to our email list while you’re here and we’ll send you a free recipe ebook containing 10 delicious vegan dinner recipes. You’ll also be the first to know when new recipes are posted to the blog. 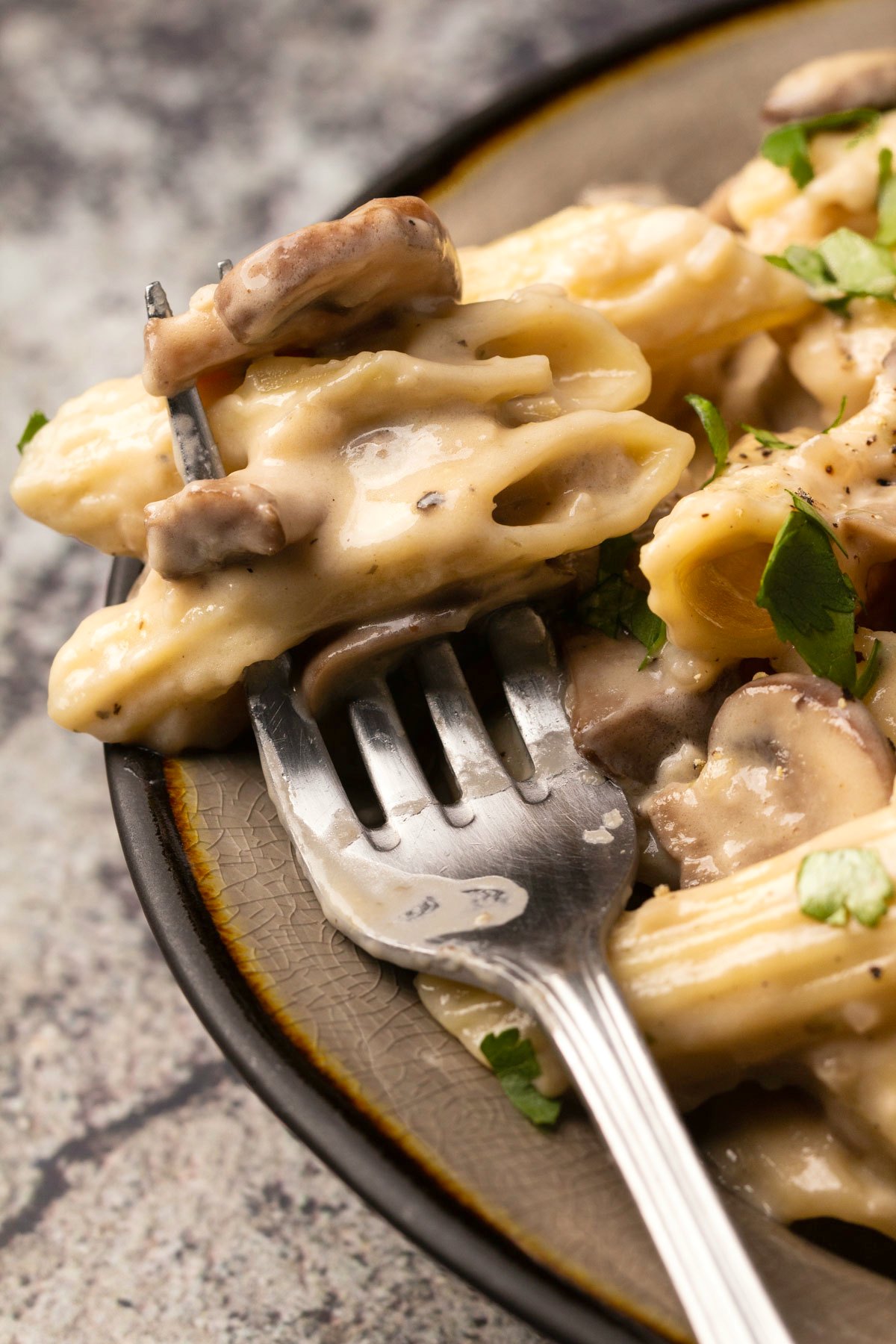 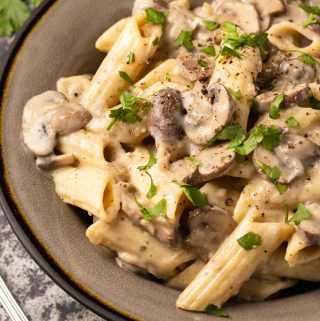