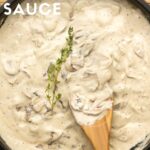 Rich and creamy vegan mushroom sauce made with homemade cashew cream for a seriously delicious sauce that is divine over anything and everything!

And seriously I think the vegan version is better!

It’s not only completely divine, it’s also really versatile and can be used so many different ways.

And then… along with being insanely delicious it’s also so easy to make! Bonus!

Of course if you love mushrooms then you’ll love our delicious vegan stuffed mushrooms and vegan garlic mushrooms, so check those out. Another amazing sauce that elevates anything you pour it on is our vegan peppercorn sauce.

How to Make Vegan Mushroom Sauce

Vegan butter and olive oil. We used both in this recipe, which might seem odd, but I was reading somewhere that using a little oil along with butter can make the butter seem to go further! So I gave it a try and well… it certainly seemed to work great in this recipe.

Cashews. We didn’t soak the cashews first in this recipe, but we made the cashew cream in a Vitamix. If you think your blender may struggle, then place the cashews in a bowl, pour over boiling hot water from the kettle until the cashews are submerged. Leave them to soak for 15 minutes and then drain and rinse and continue with the recipe.

If you don’t eat cashews, then you might want to try our tahini mushroom sauce instead or the mushroom sauce we used with our tofu burger recipe. Neither of those sauces uses cashews.

This sauce is super versatile and would be totally divine served over vegan ‘meats’ like vegan steak or vegan chicken. It would also be wonderful with a vegan burger or over a baked potato or served with pasta or rice or even over vegan mashed potatoes or vegan cauliflower mashed potatoes.

It’s really an ‘everything’ sauce in that it would go great with pretty much anything savory.

Keep leftovers in the fridge and consume within 3-4 days. 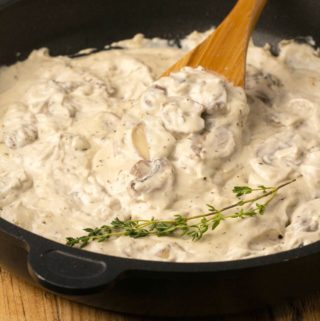