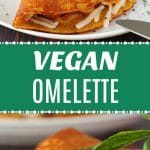 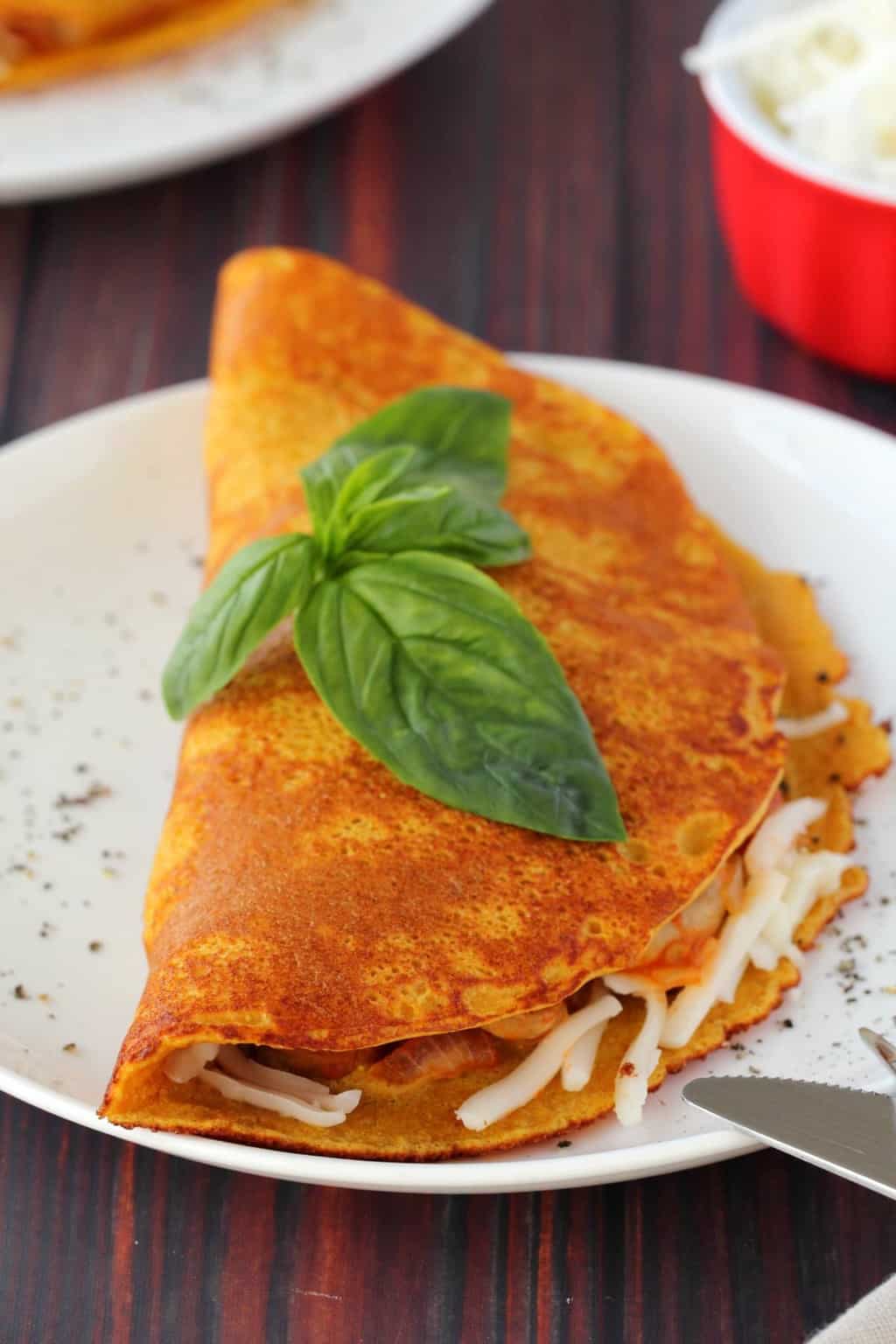 When Jaye and I were first dating, we were both working at a nightclub in Cape Town. I was a bartender and he was the manager.

Shifts were long – we would often start at 5pm and only knock off at 7am the next morning.

I was at university at the time so you can just imagine how well I was coping with the early morning classes. Luckily I only worked 2-3 nights a week. But that’s besides the point.

The actual point of my little story is that when I wasn’t rushing off to early morning classes, we would often go out for breakfast straight after our shift. And omelettes were the preferred choice!

By the time we went vegan, we had also left nightclub work behind and were all about getting to bed at 11 like ‘normal’ people.

But nonetheless breakfast food brings back fond memories, and though I didn’t exactly miss omelettes after going vegan, I was still pretty thrilled to sample some vegan omelettes in a restaurant in Cape Town.

So after that I was totally inspired to get in the kitchen and figure out how to make my own.

Though I haven’t actually tried to make one with tofu, just from sampling vegan omelettes in restaurants I decided that I preferred the ones made with chickpea flour. So that’s what I went for with this recipe. 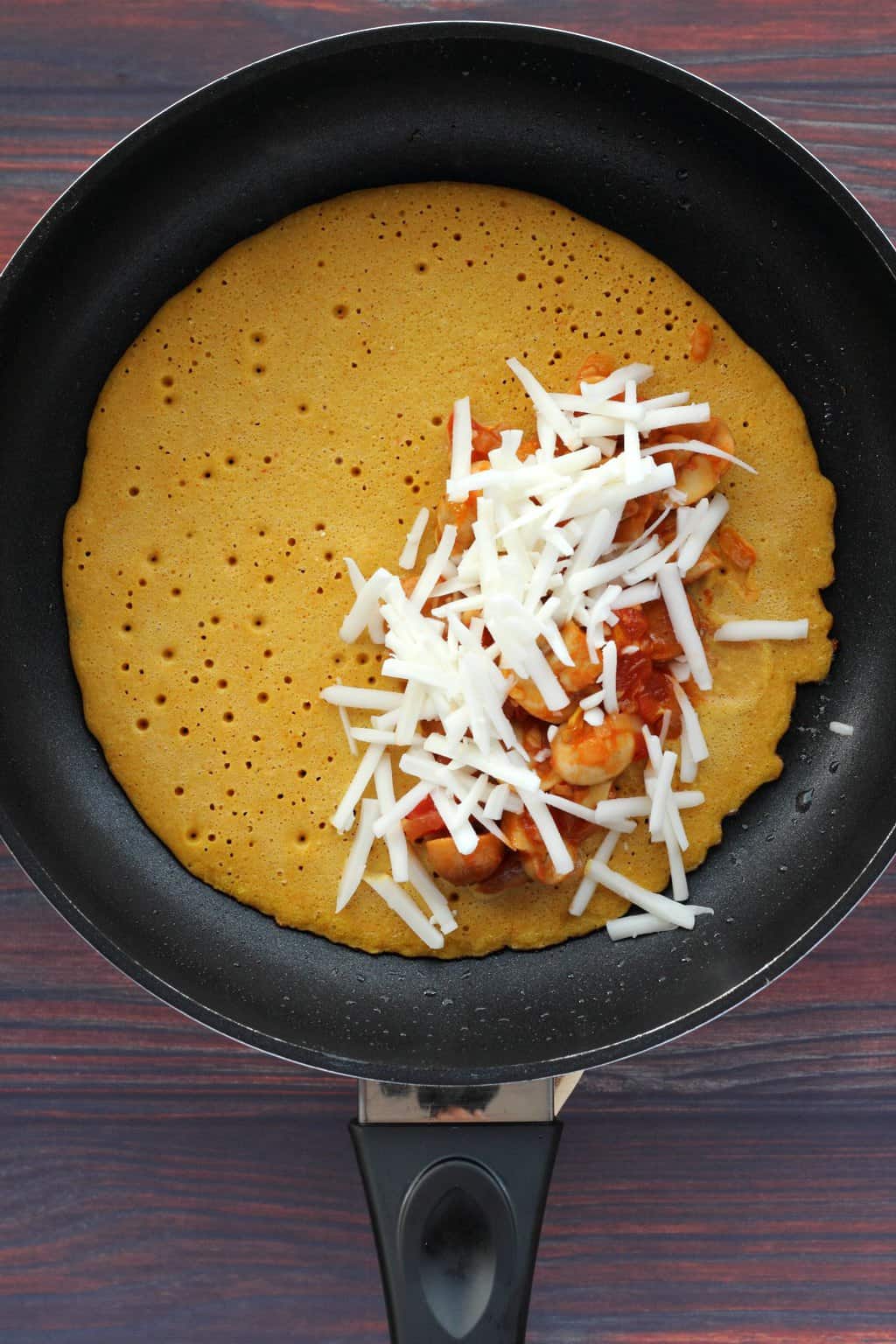 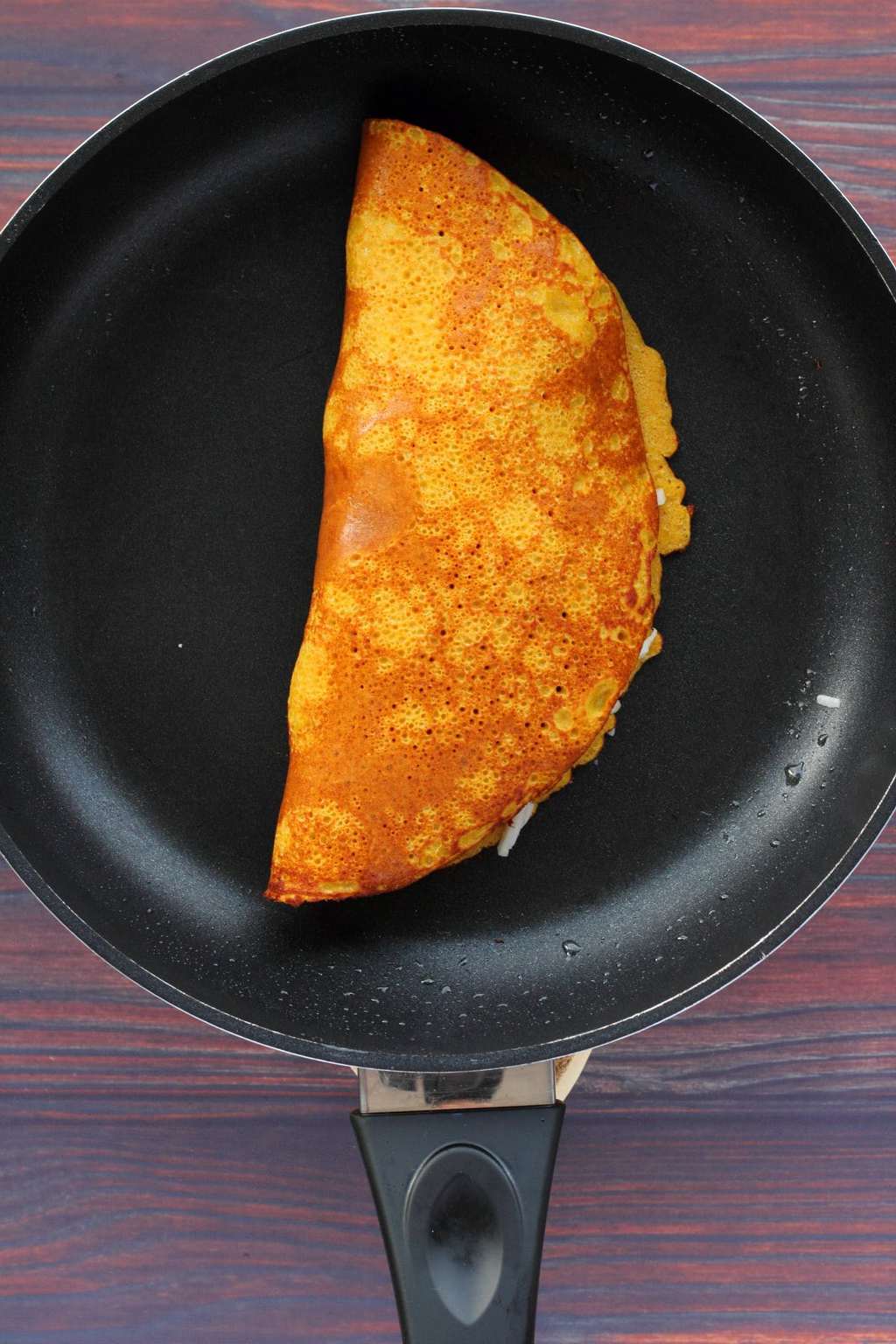 When I was making this Jaye remarked that it’s more like a pancake than an omelette really when you consider the ingredients, and….maybe it is.

But with how it’s served, the fabulous yellow color, the light and fluffy texture, and a little black salt (also called kala namak – has a super eggy taste), it’s perfectly ‘omeletty’ to me! 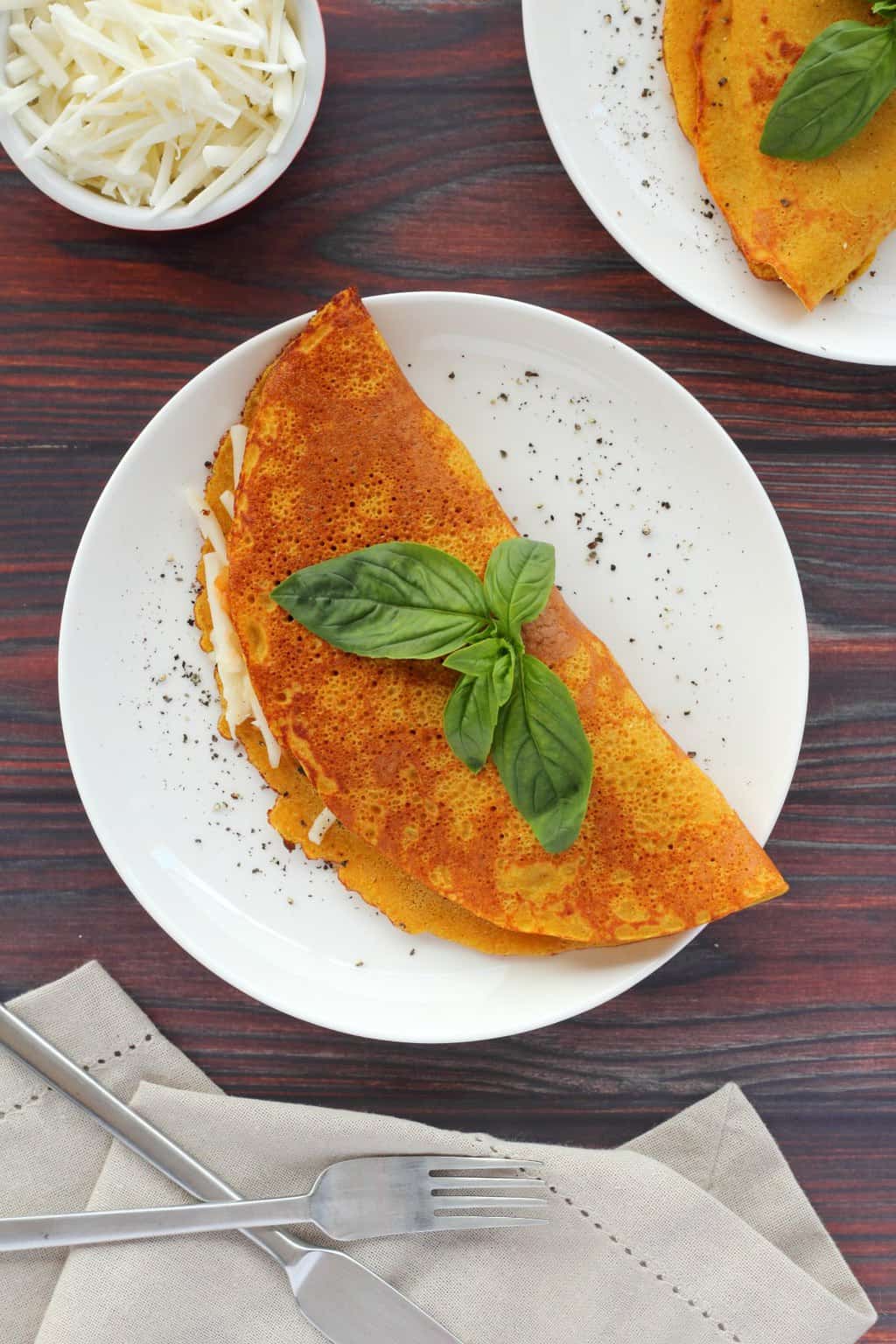 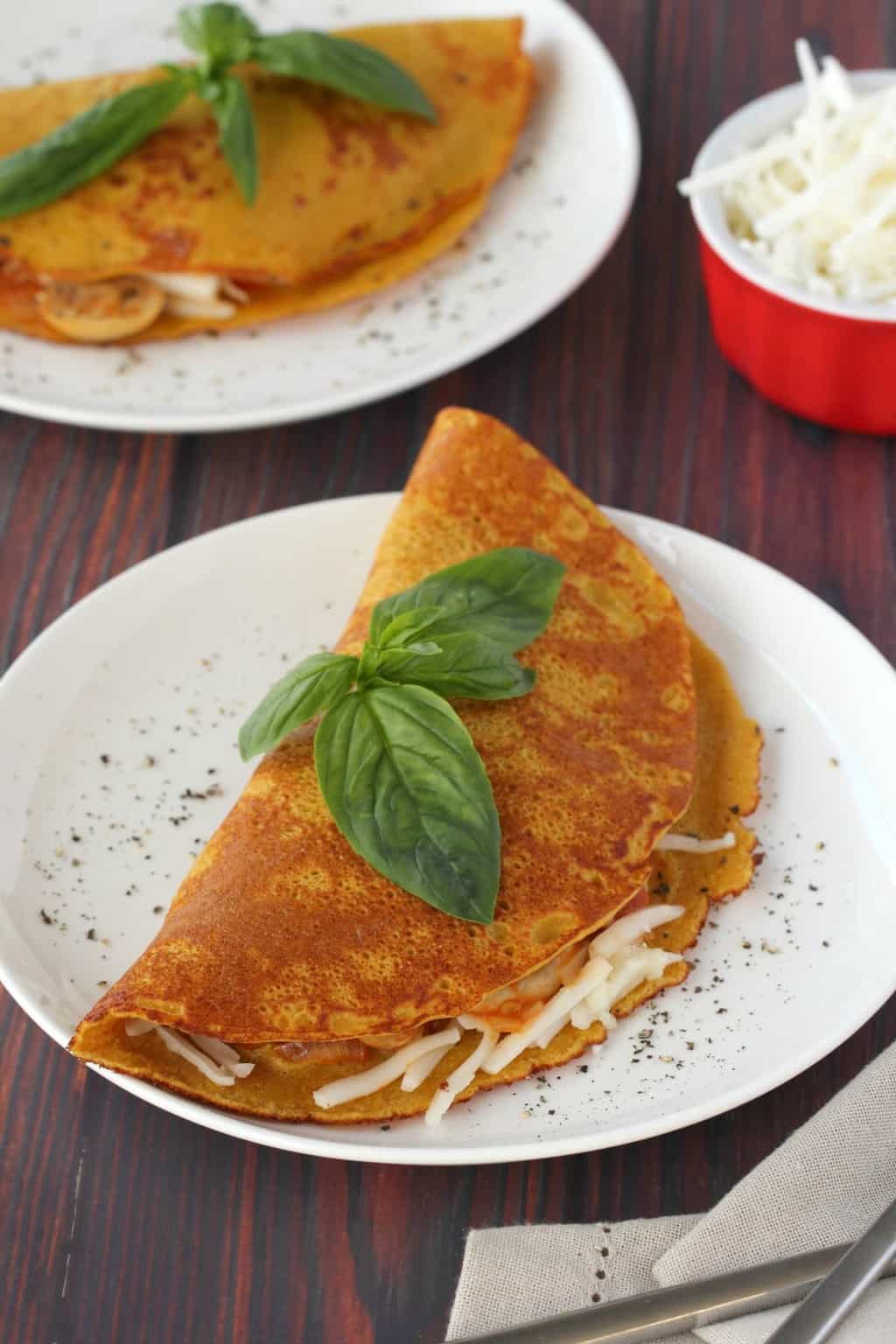 And with some vegan cheese, mushrooms, tomatoes, onion and some sliced up vegan sausage, vegan omelettes are just perfect vegan breakfast food. No doubt.

I mean you can even fry up some vegan bacon on the side if you want to.

Serve with toast (or not if gluten-free) and you have yourself a vegan breakfast of kings I tell ya!

I used black salt (kala namak) in this omelette, which gives a wonderful eggy flavor. If you haven’t tried black salt yet then you definitely have to give it a go! It’s got a very strong eggy flavor, it can almost seem too strong, so you have to go easy. I used only ¼ tsp in this recipe and I’d recommend to start with that amount, but after that if you like it and want to add more, go for it! If you don’t have black salt though you can just use regular salt, this omelette will still be totally awesome. 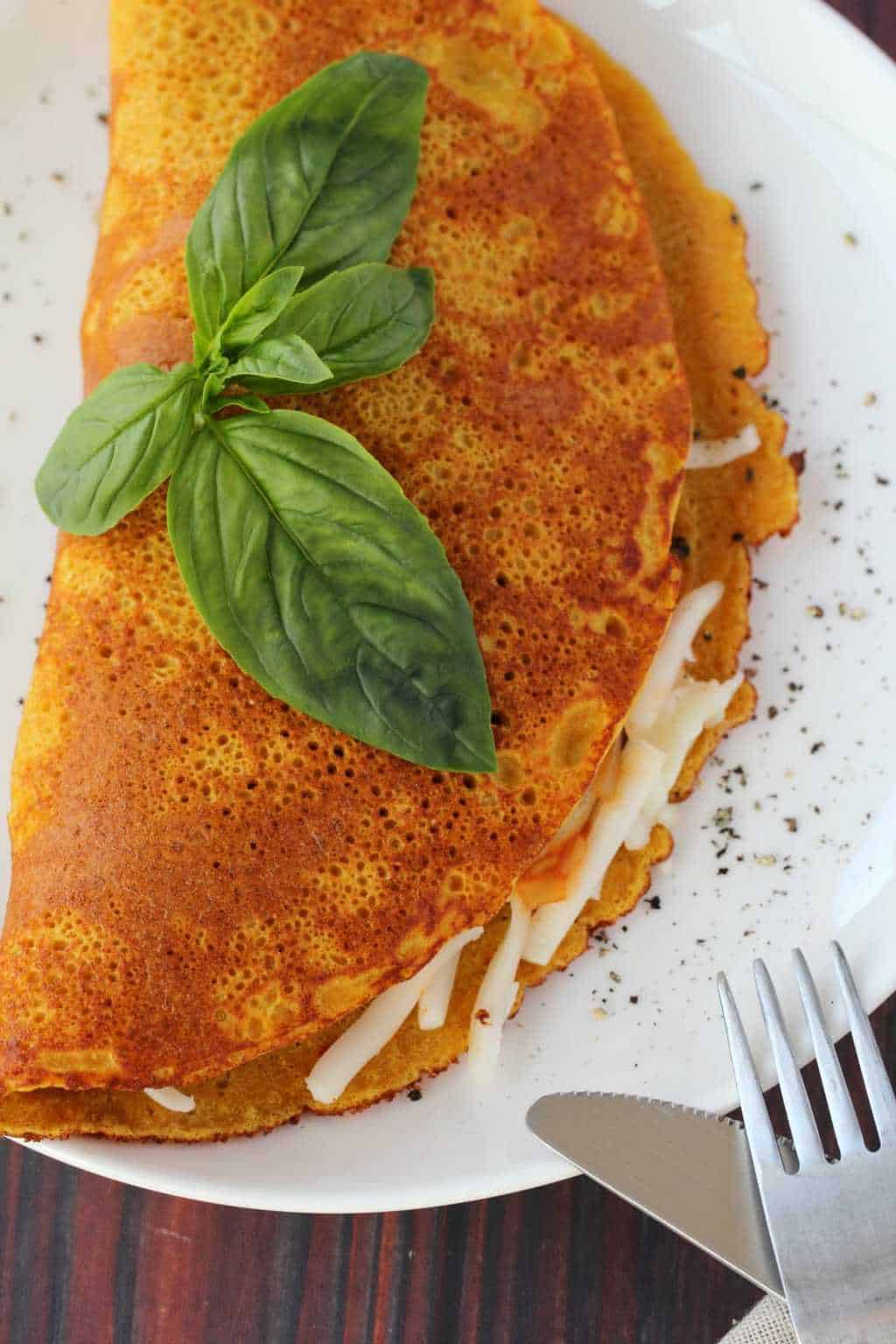 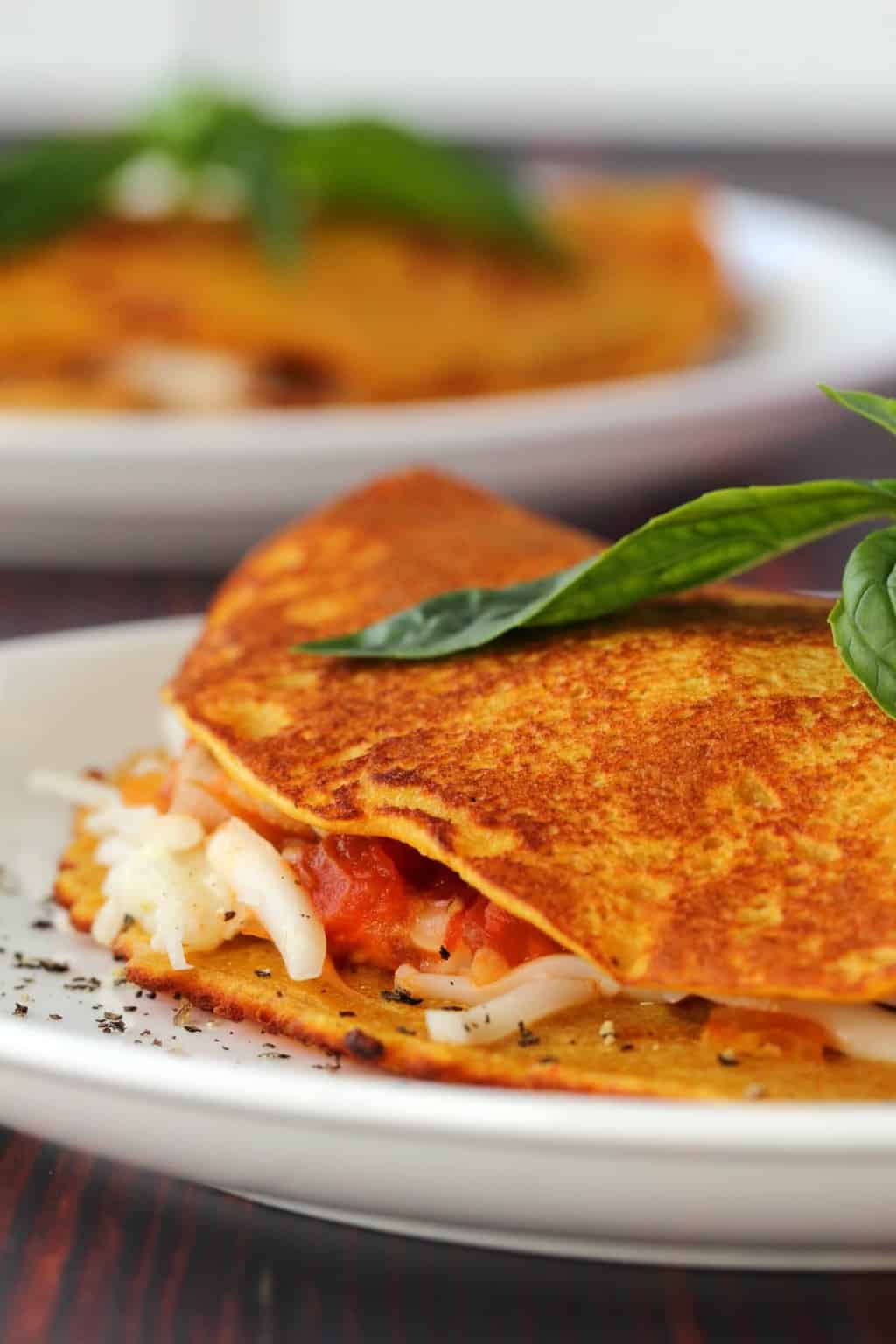 You will love how light and fluffy, cheesy, salty and omeletty this recipe is. As well as how easy it is to throw together.

You’ll also love how high in protein this is at 18.6g protein per omelette! 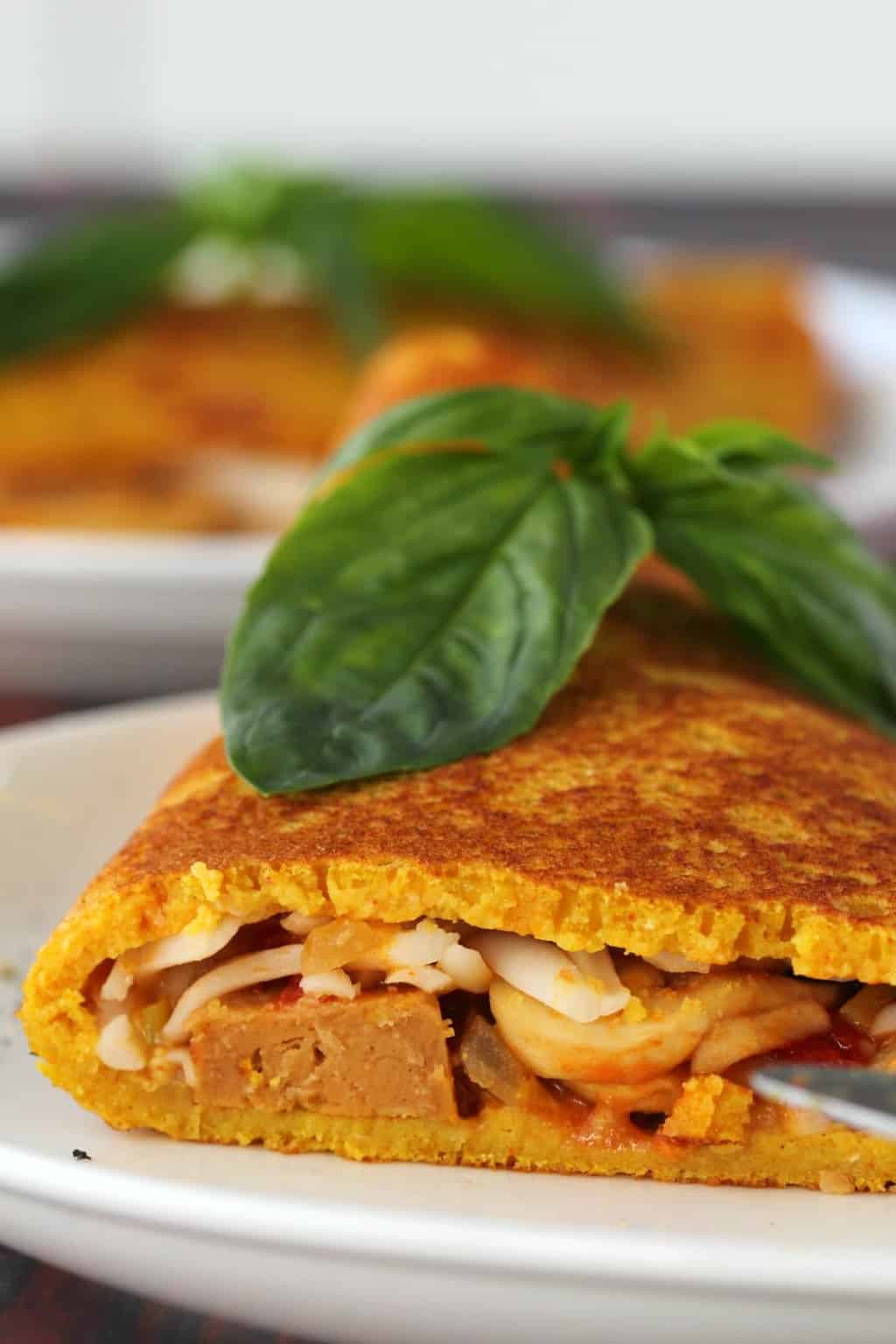 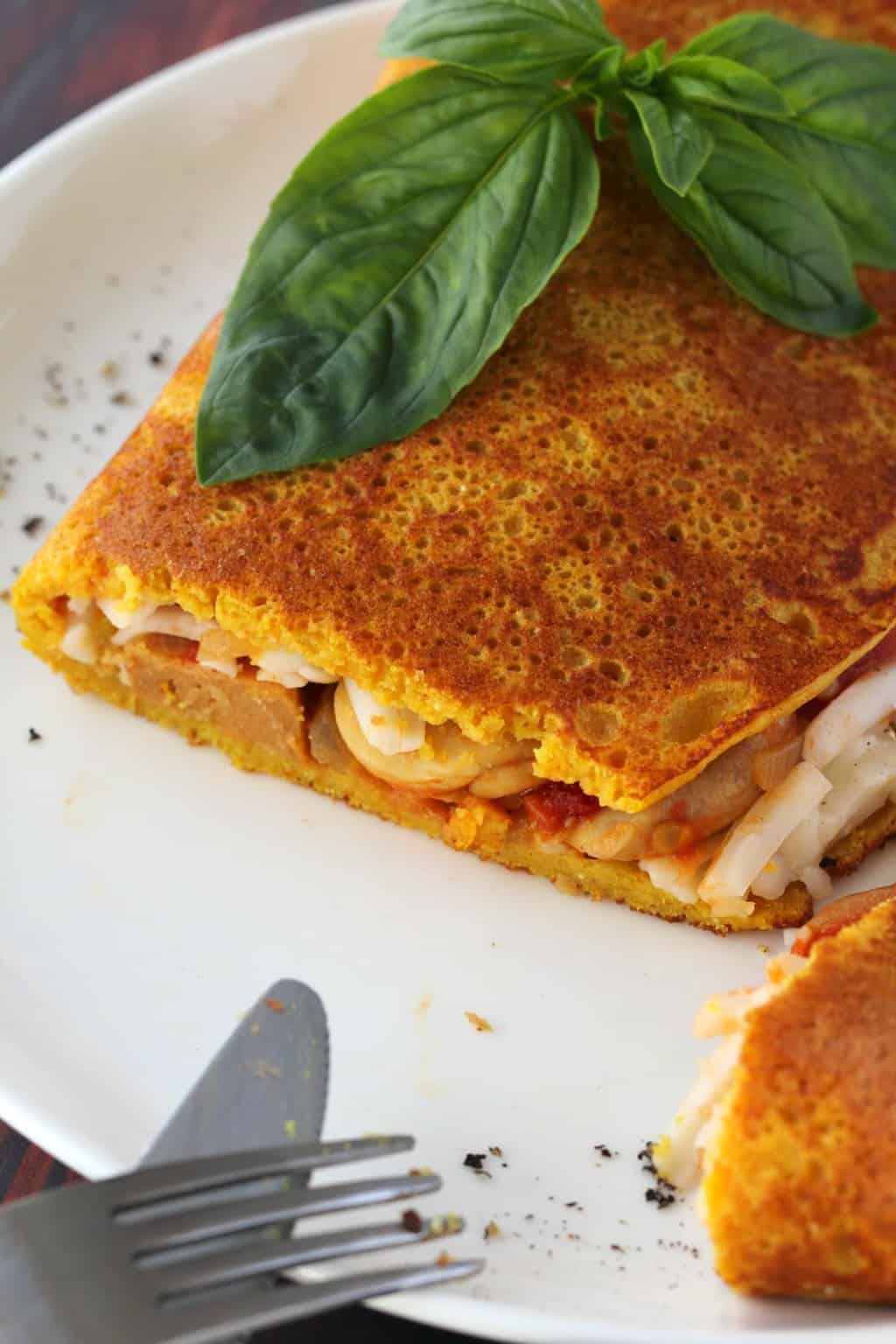 So let us know what you think of this recipe by leaving a comment and rating the recipe too, thanks so much.

And while you’re here, sign up for our email list and receive our awesome recipe ebook containing 10 vegan dinner recipes entirely free. You’ll also be the first to know when new recipes are posted to the blog. 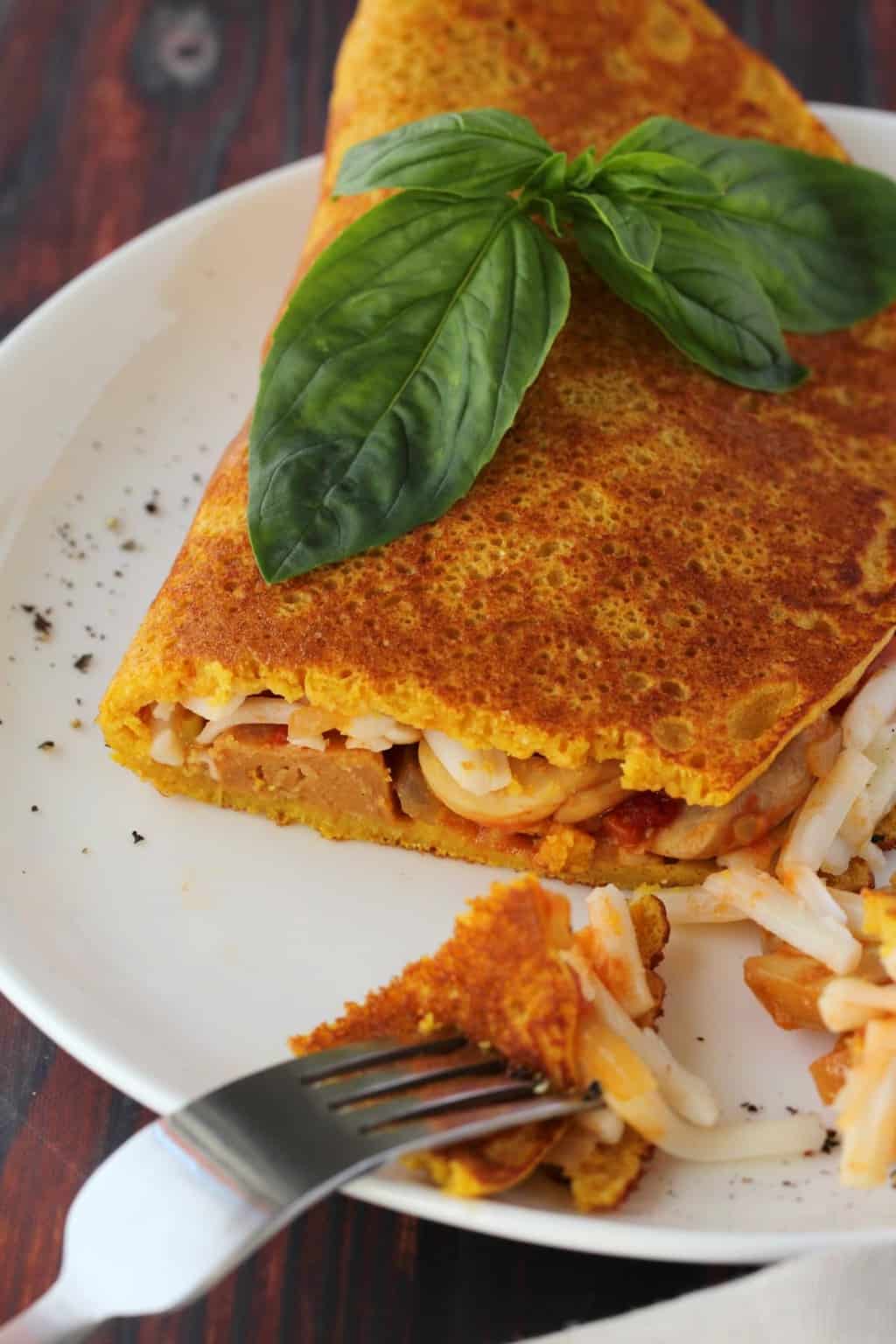 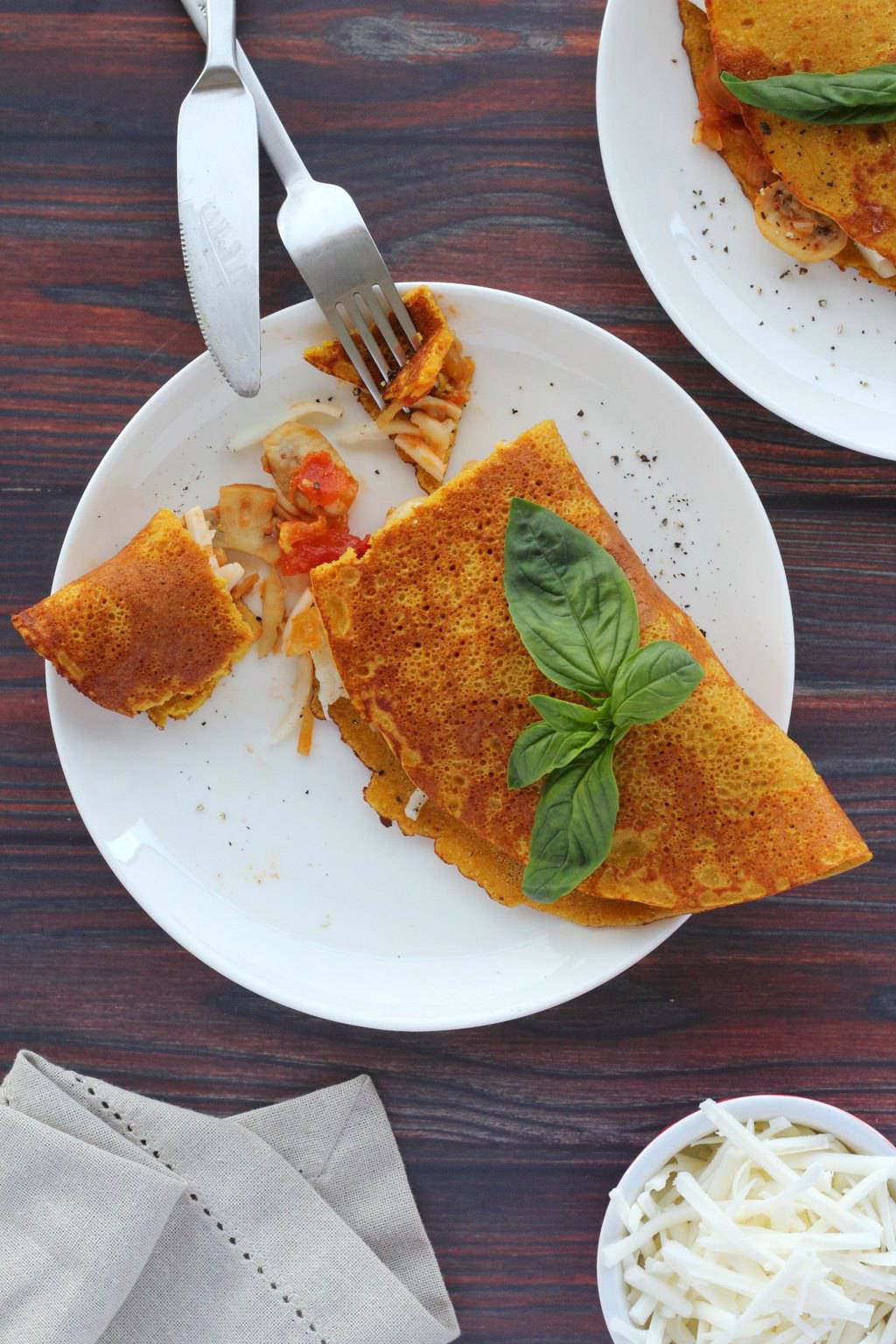 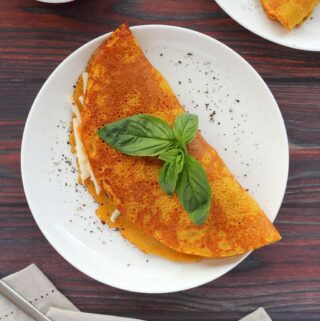