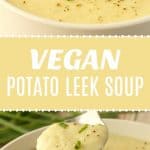 Creamy and delicious vegan potato leek soup! This hearty and comforting meal is filling, satisfying and will have you coming back for more!

This vegan potato leek soup is everything you want a soup to be!

Now, I’ll admit, leeks are not an ingredient I was extremely familiar with but now that I am…. Well, let’s just say I have been missing out! Leeks are part of the onion family! And who doesn’t love onions?

And potatoes in a soup, well that’s always a winner! I am already a huge fan having made my creamy vegan potato soup that I simply adore!

Potatoes are total comfort food and blending them up in a creamy soup with leeks and onions and spices and garlic and all kinds of good stuff, well you know it’s going to be great! 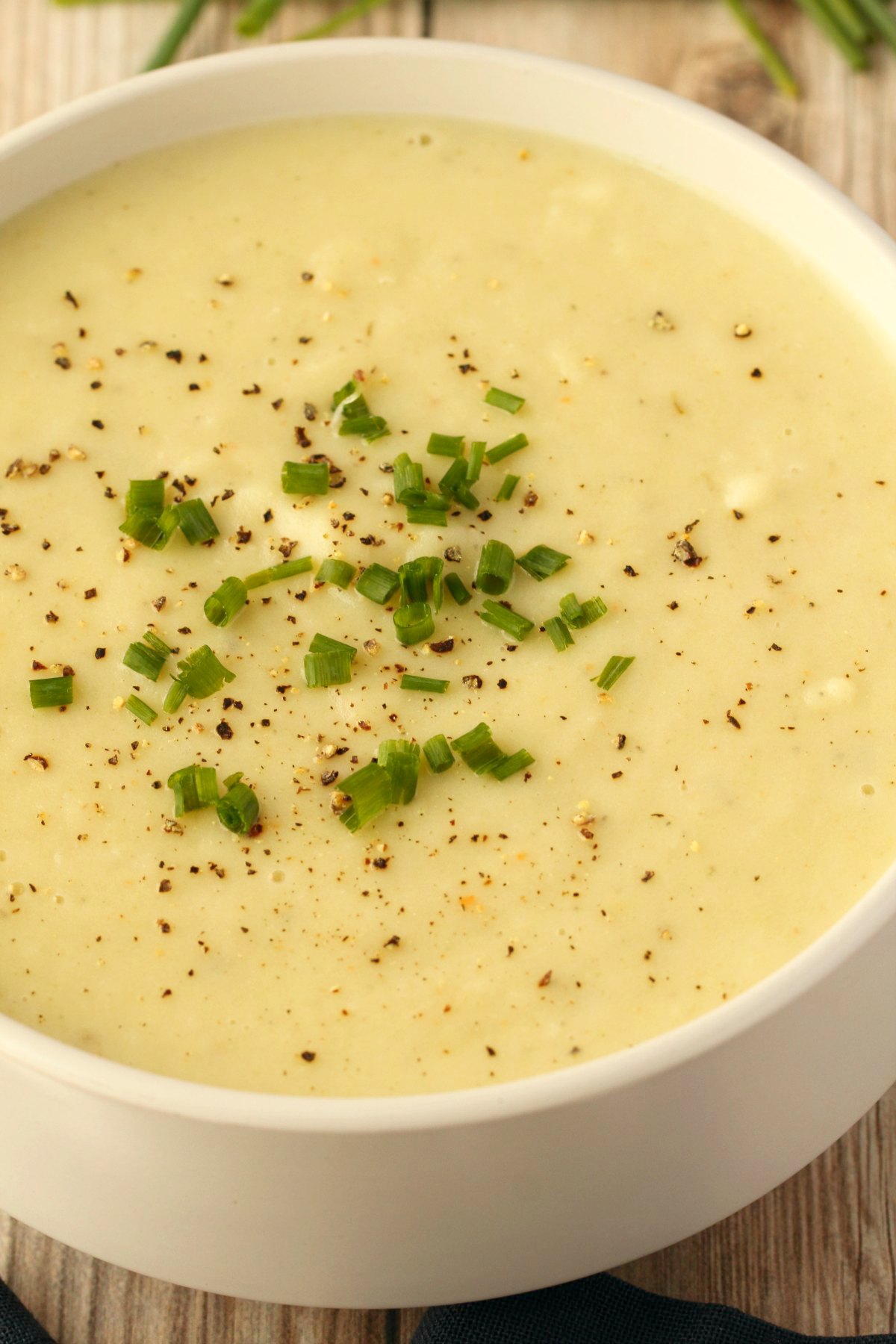 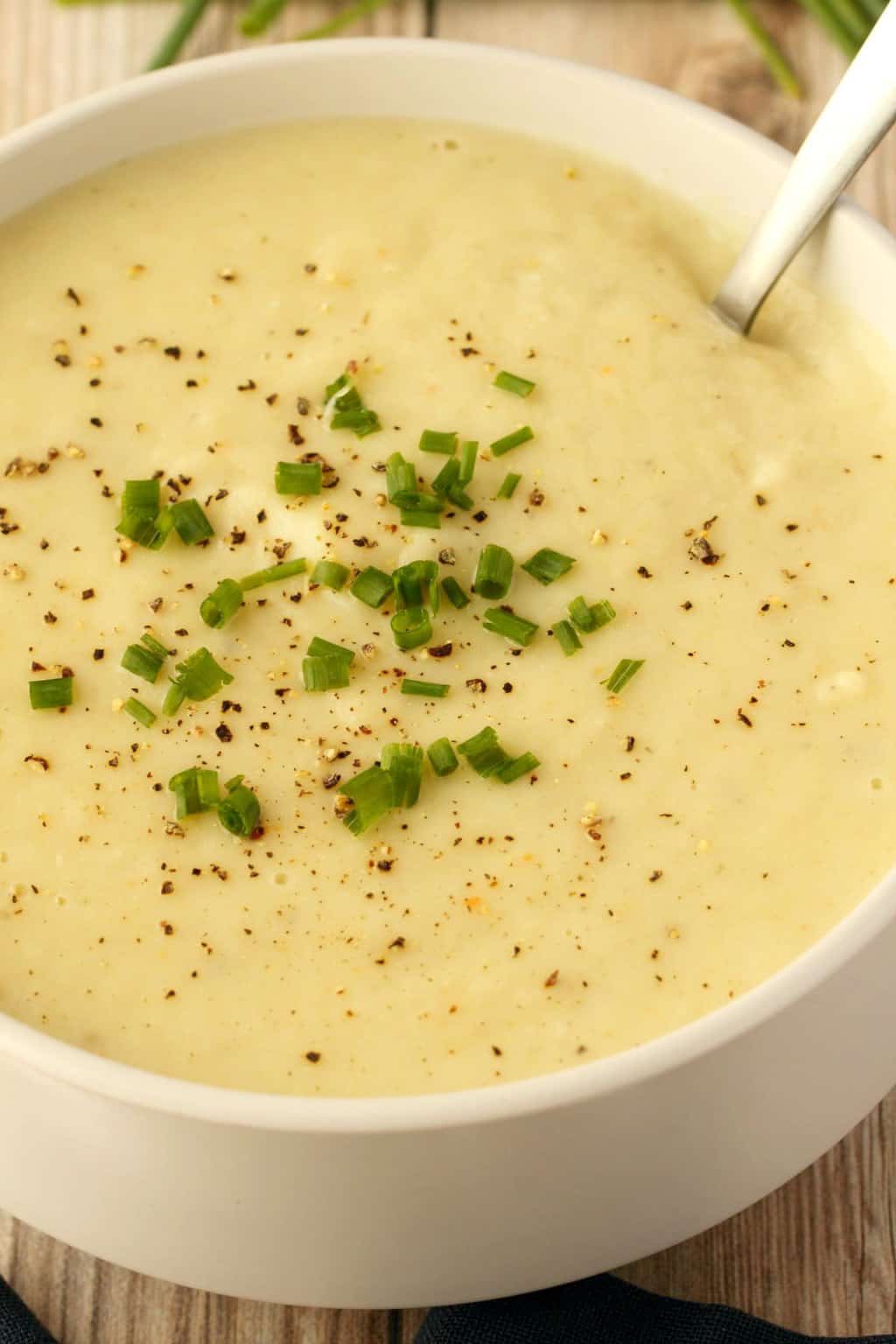 You can buy your leeks already cleaned up nicely, where they’re already trimmed down so that they’re just the inner white and light green parts, or you can buy the whole leeks where it’s the outer dark green parts as well.

If you buy the whole leeks, be sure to cut all those outer dark green parts and root ends away so that all you’re left with is the white and light green parts. And then those are the parts that you chop up for the soup (as pictured below). 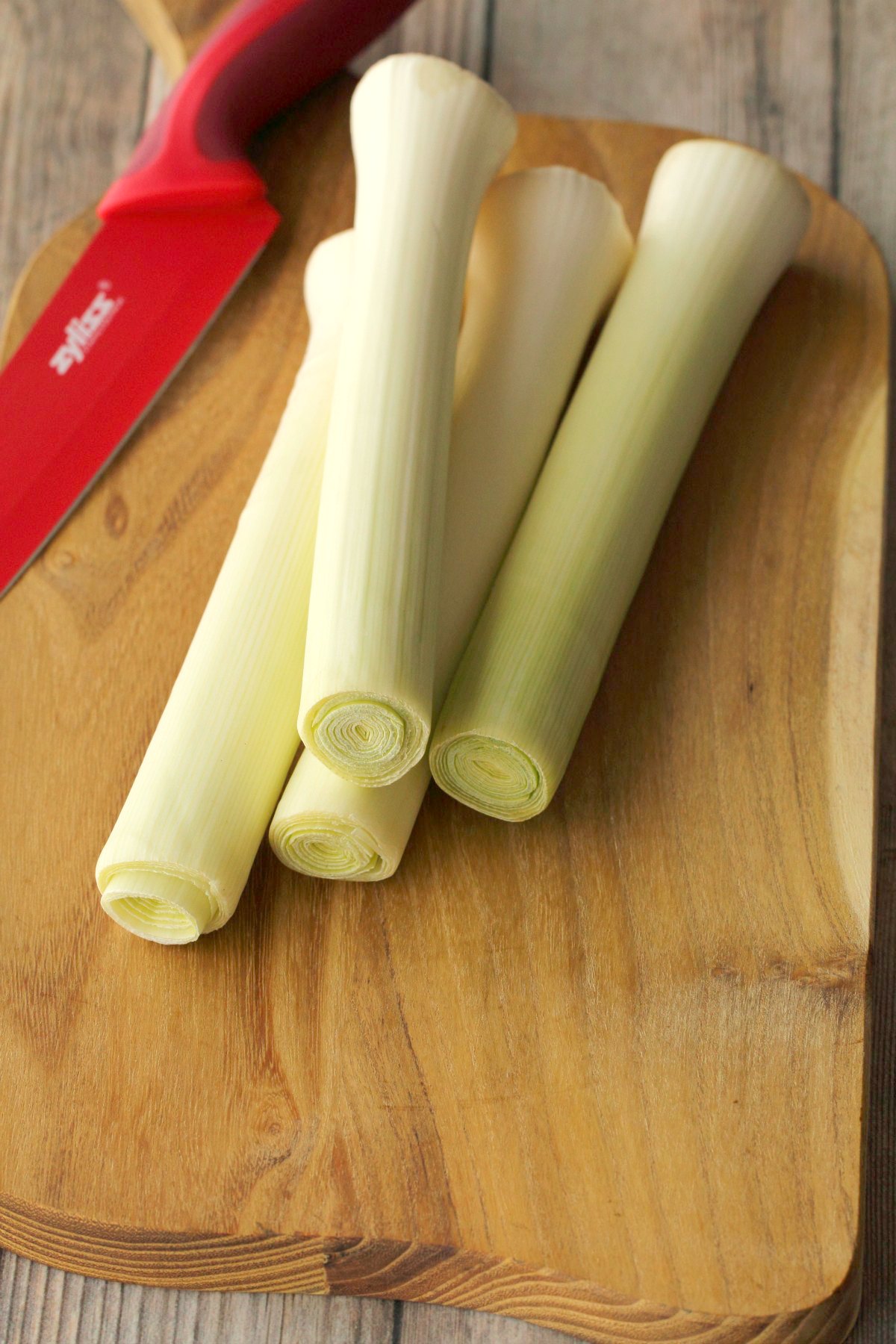 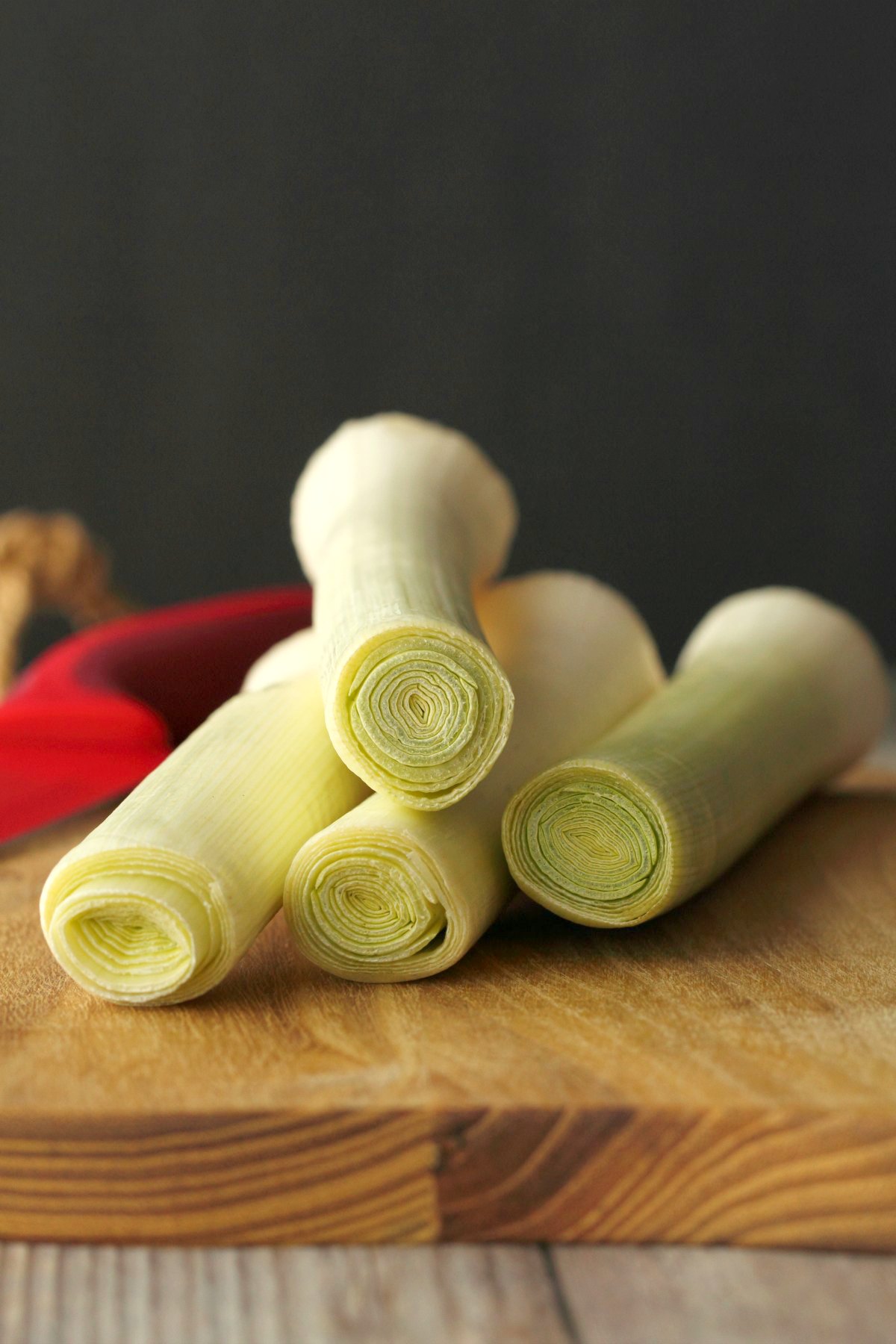 Add chopped onions and chopped leeks to a pot with crushed garlic and olive oil and sauté until softened. Then add in some spices.

Add chopped potatoes, bay leaves and vegetable stock and bring to a boil. Reduce heat, cover and simmer until the potatoes are soft and cooked.

Remove from the heat and remove the bay leaves. Add in a can of coconut cream and blend up the soup using an immersion blender.

If you don’t have an immersion blender then transfer to your blender jug in stages, blend until smooth and then gradually return to the pot.

Add sea salt and black pepper to taste (you can be quite liberal with this) and then serve with some fresh chopped chives and a sprinkle of black pepper on top. 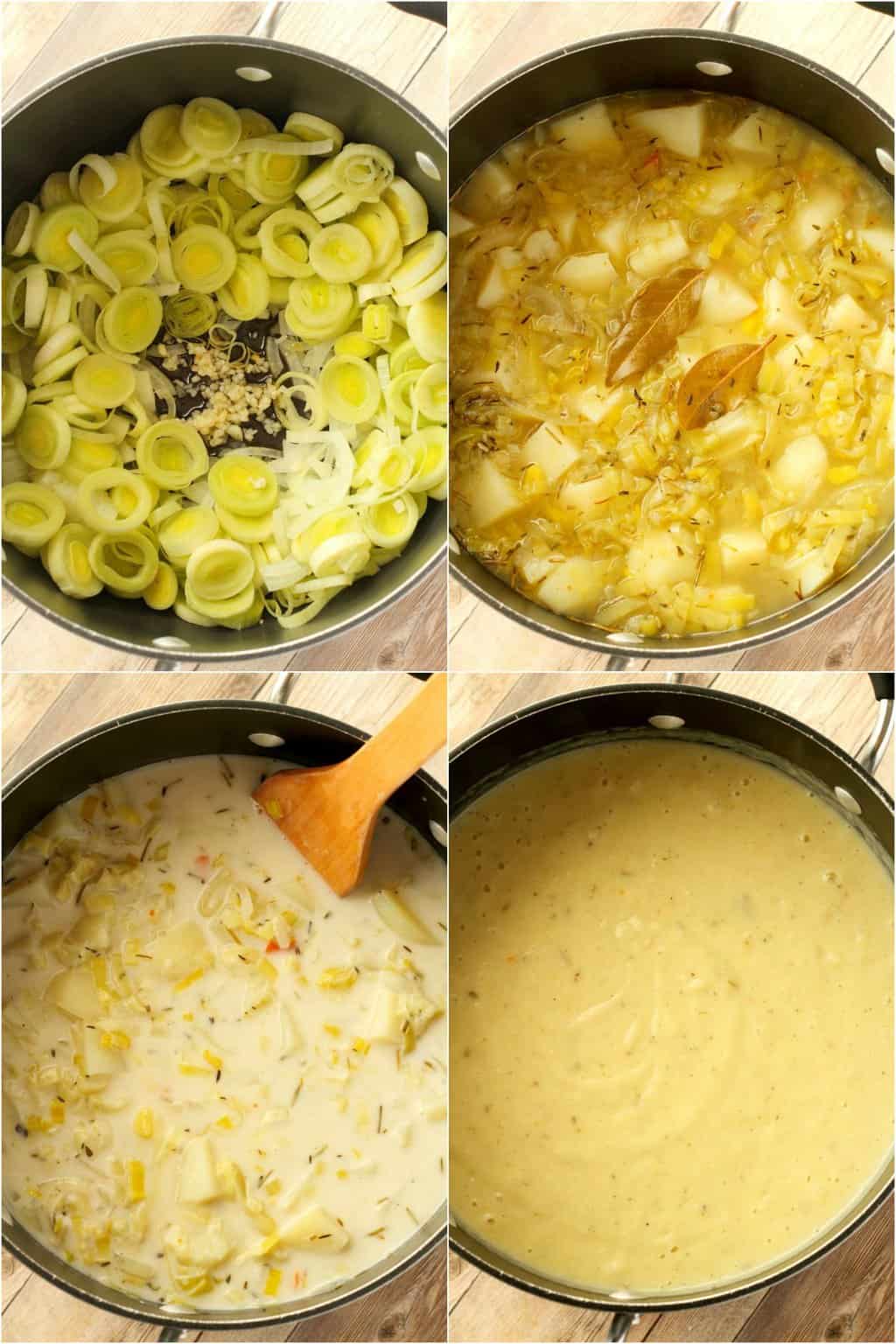 What does a vegan potato leek soup taste like?

The flavor of this soup is deliciously mild.

But…that’s also the caveat, the flavor is mild!

Leeks are actually very mild in flavor, and of course potatoes are not strong in flavor. This soup is spiced very nicely, and the outcome is very creamy and delicious, with the bay leaves and the thyme and the rosemary and the coriander powder and the vegetable stock, and of course you serve it with some fresh chopped chives.

But, remember if you are serving yourself a bowl and finding it a little too mild in flavor – don’t be shy with that extra sea salt and black pepper!

Sometimes it’s just a few extra dashes of salt and/or black pepper and it all comes alive. 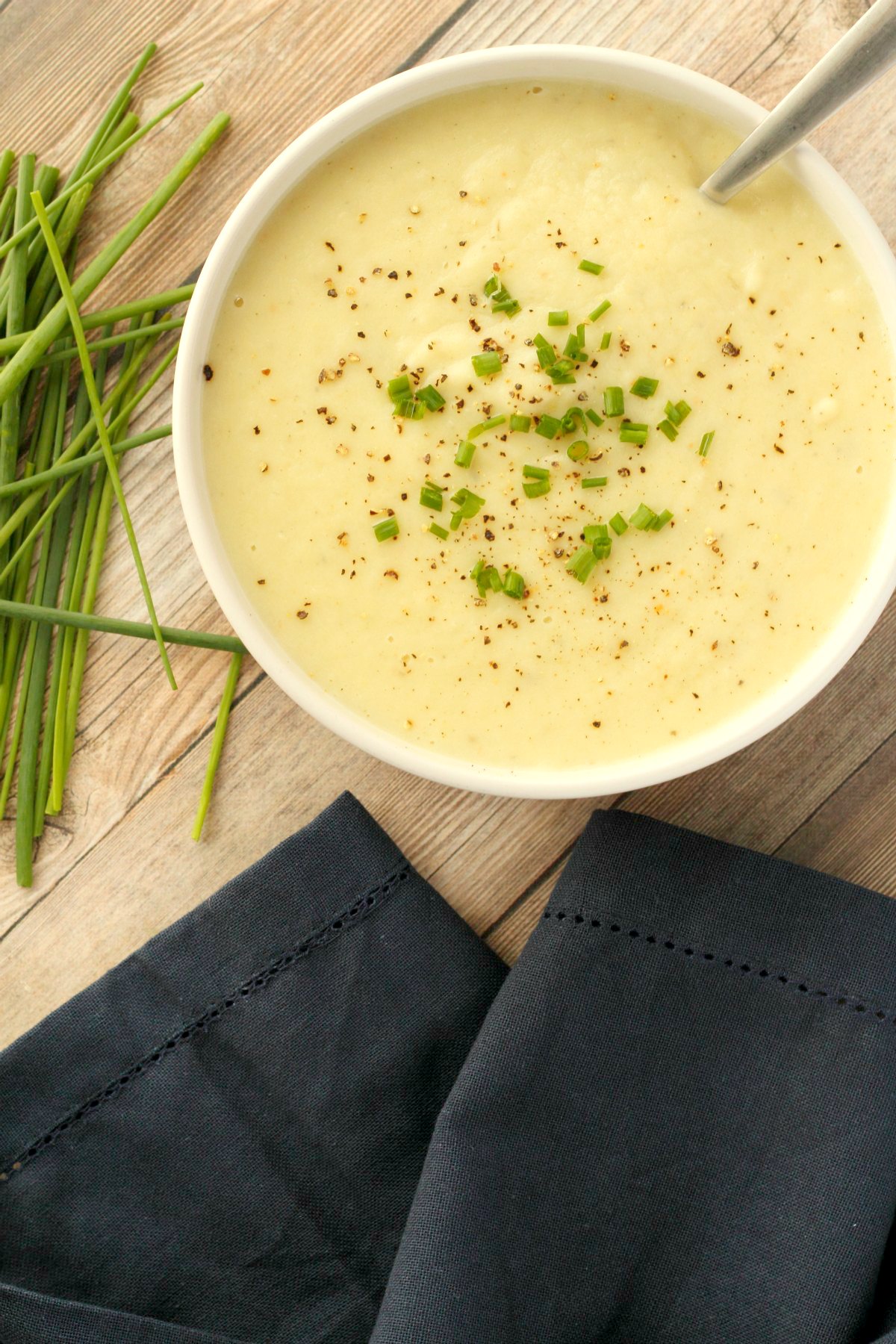 Traditionally a potato leek soup uses regular cream so we switched that for coconut cream for the vegan version and I really don’t think there is any coconut flavor that results from it. But if you hate coconut then it might be best to switch this for something else.

This vegan potato leek soup makes an excellent appetizer but also main course! If you serve it with some crispy fresh bread and maybe a side salad it can be a very filling main course. 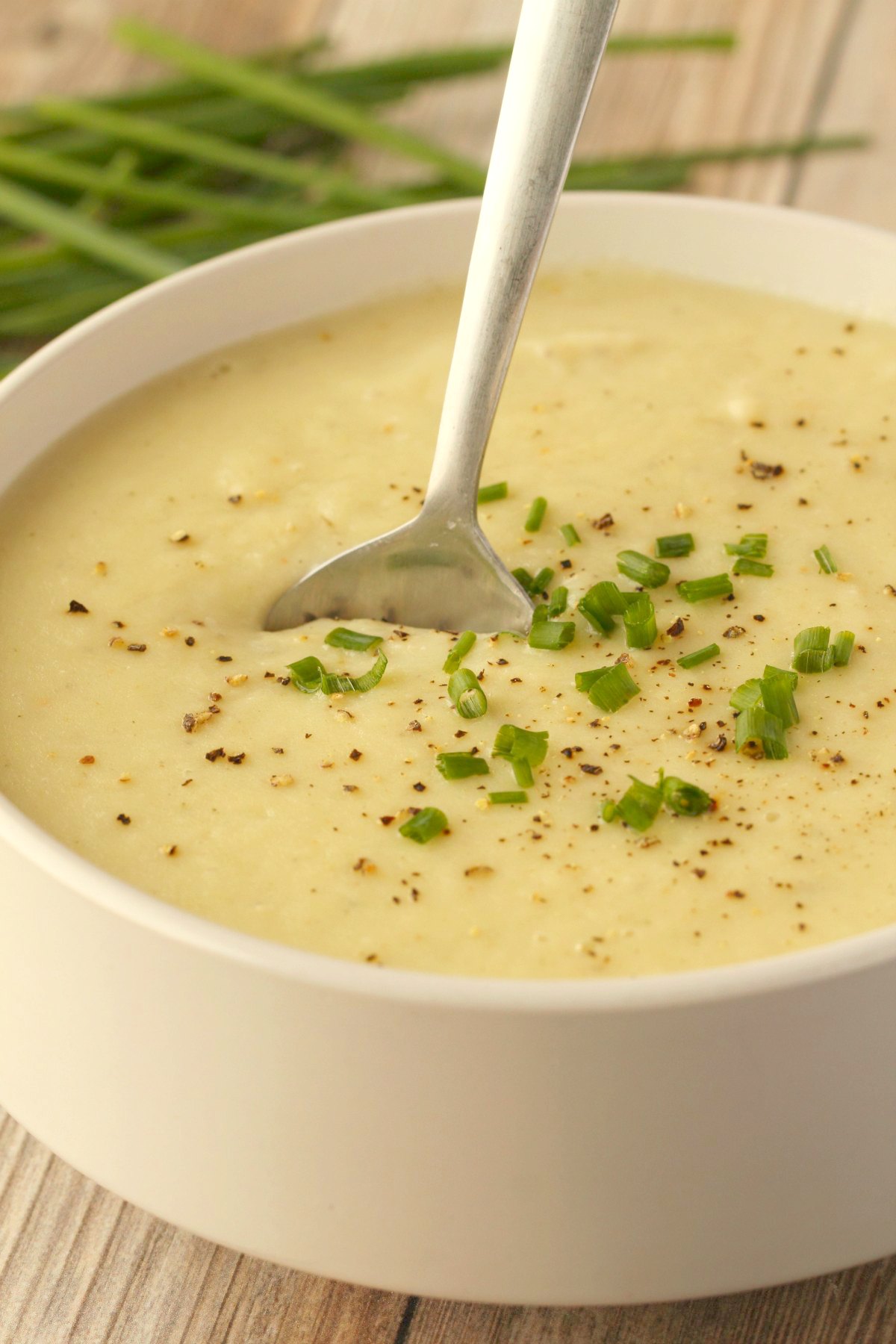 So I really think you will love this vegan potato leek soup! It is:

Leftovers keep very well and can be reheated the next day, so if you’re cooking for less people that’s not a problem at all! 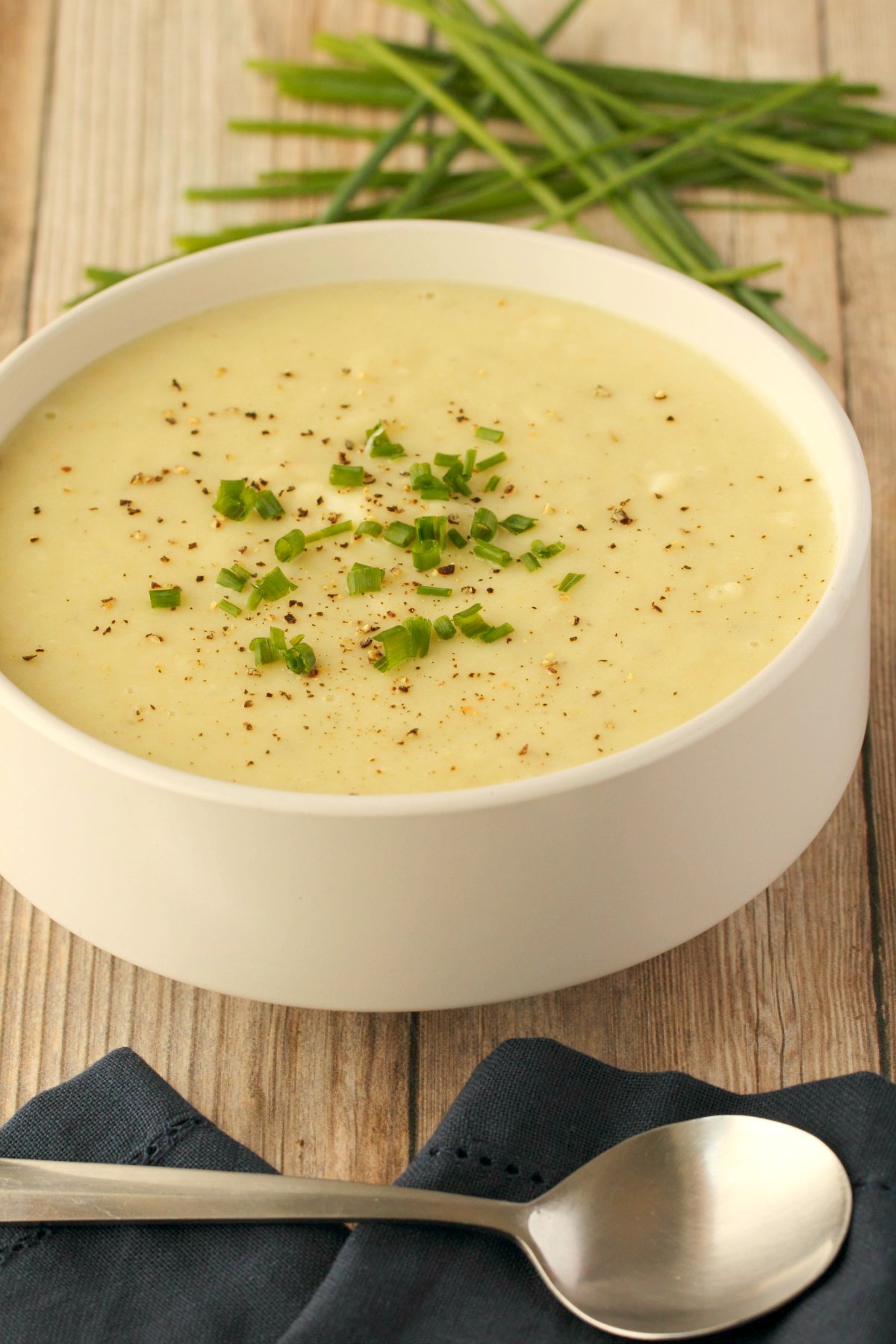 So what do you think of this vegan potato leek soup? Let us know in the comments! And please rate the recipe too, it’s so helpful! Thank you!

Sign up to our email list for an awesome free recipe ebook and to stay updated with all our latest recipes posted to the blog. 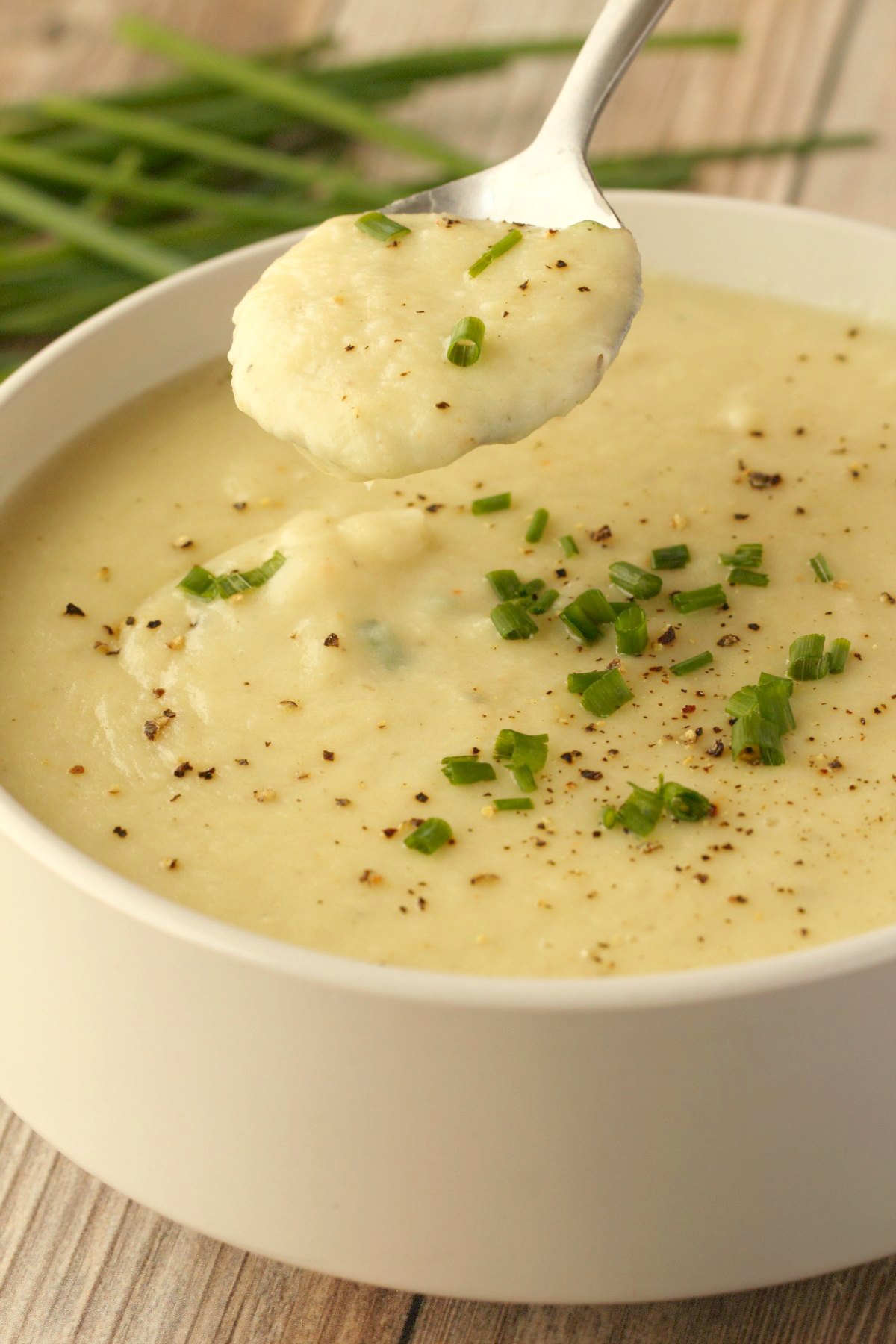 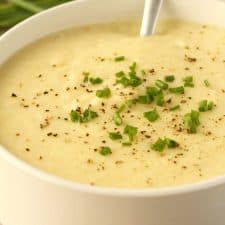