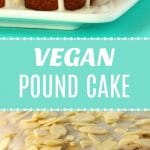 Vegan pound cake with an almond glaze. Moist, rich and dense (but not heavy) this pound cake is super simple and absolutely delicious. 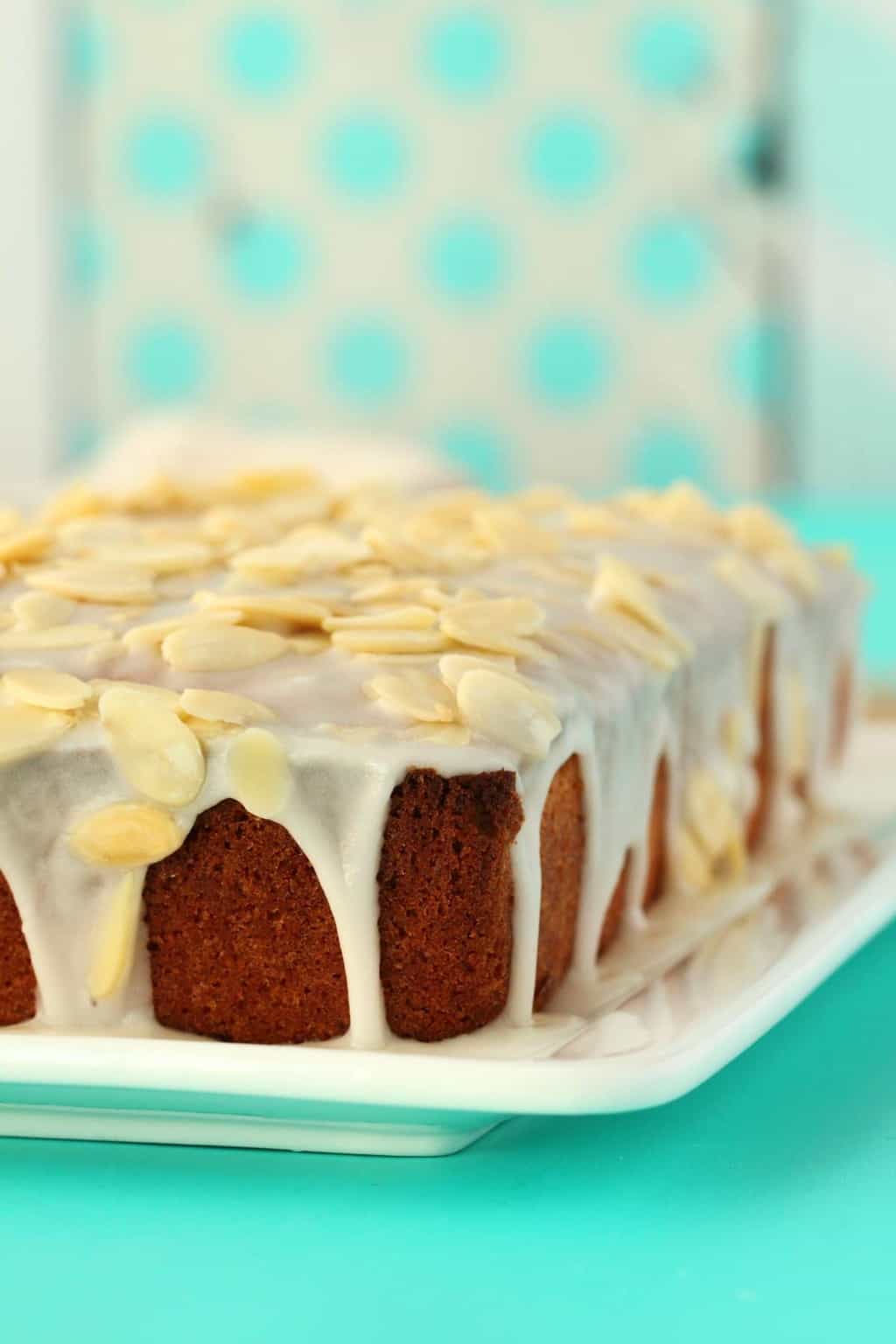 This vegan pound cake with an almond glaze turned out super well. I’m ridiculously pleased about it.

Mostly because it took me AGES to figure it out!

Traditionally a pound cake is made with a pound of flour, a pound of sugar, a pound of eggs and a pound of butter (the recipe usually makes more than one loaf if you were wondering why so much of each!).

Now here’s the thing, when you want to veganize a recipe, and you need to replace 1 egg, it’s really quite simple, you can just use 1 flax egg or you can use some applesauce or something, it’s not a big deal.

But when you’re replacing a whole lot of eggs (like 4 of them for one loaf of pound cake), it gets more challenging.

The thing is you can’t ever use 4 flax eggs or a whole heap of applesauce because when eggs are cooked they firm up, they become solid, they provide structure. Flax eggs and applesauce don’t do that. 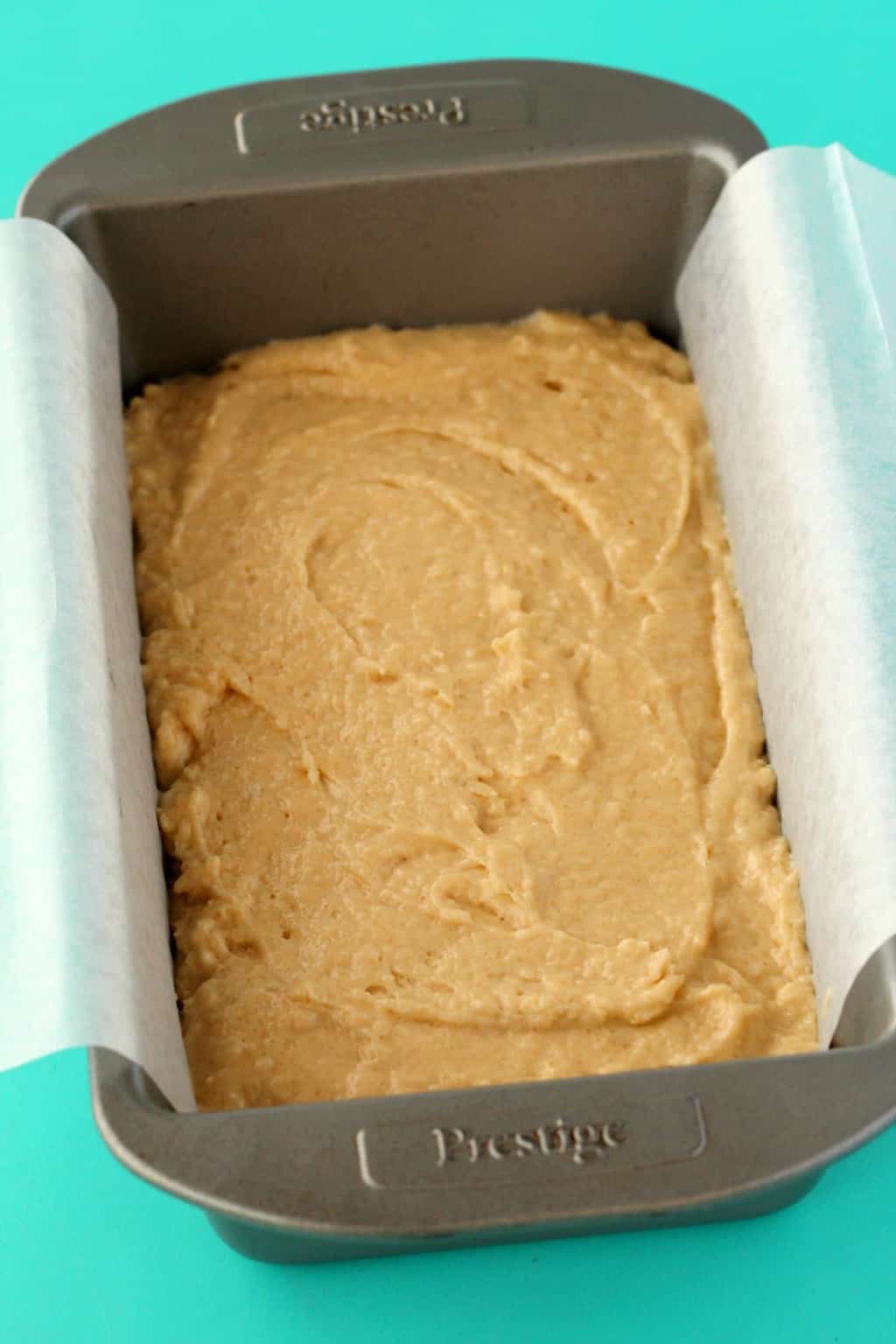 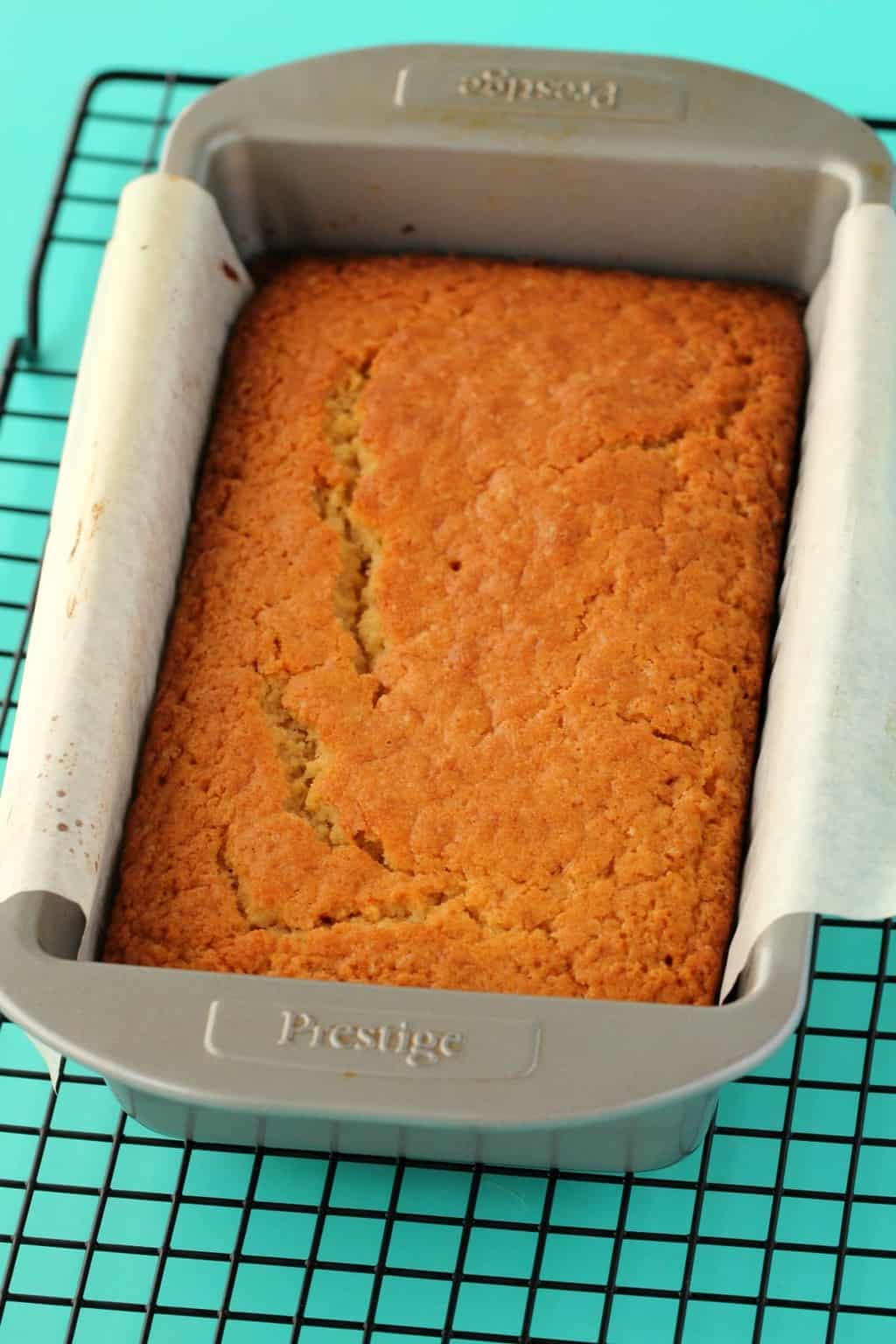 No egg replacer? What?

So with this vegan pound cake, I had to do a lot of improvising and I tried all sorts of combinations, and in the end did not replace the eggs at all, not at all.

I used vegan butter, sugar, flour and vegan buttermilk as the main ingredients. The result might be a tiny bit lighter and fluffier than a traditional pound cake, with a slightly looser crumb, but it’s still much denser than a sponge cake and works very well for this.

Another little snafu I was running into was a case of sinking in the middle! And then thankfully I found a great troubleshooting article which goes through all the reasons this can happen, most of which I was aware of but one important one that I didn’t know.

The ratio is 1 to 1 and ½ tsp baking powder per cup of flour, not more than that when you’re making cakes.

Since my recipe uses 2 cups of flour, the maximum amount of baking powder I can then use is 3 tsp. And when it was sinking in the middle I was using 4!

It was sinking in the middle because the cake was rising too fast without enough structure to support it, hence the collapse in the middle. So as soon as I dropped the baking powder down to 3 tsp that problem was solved. 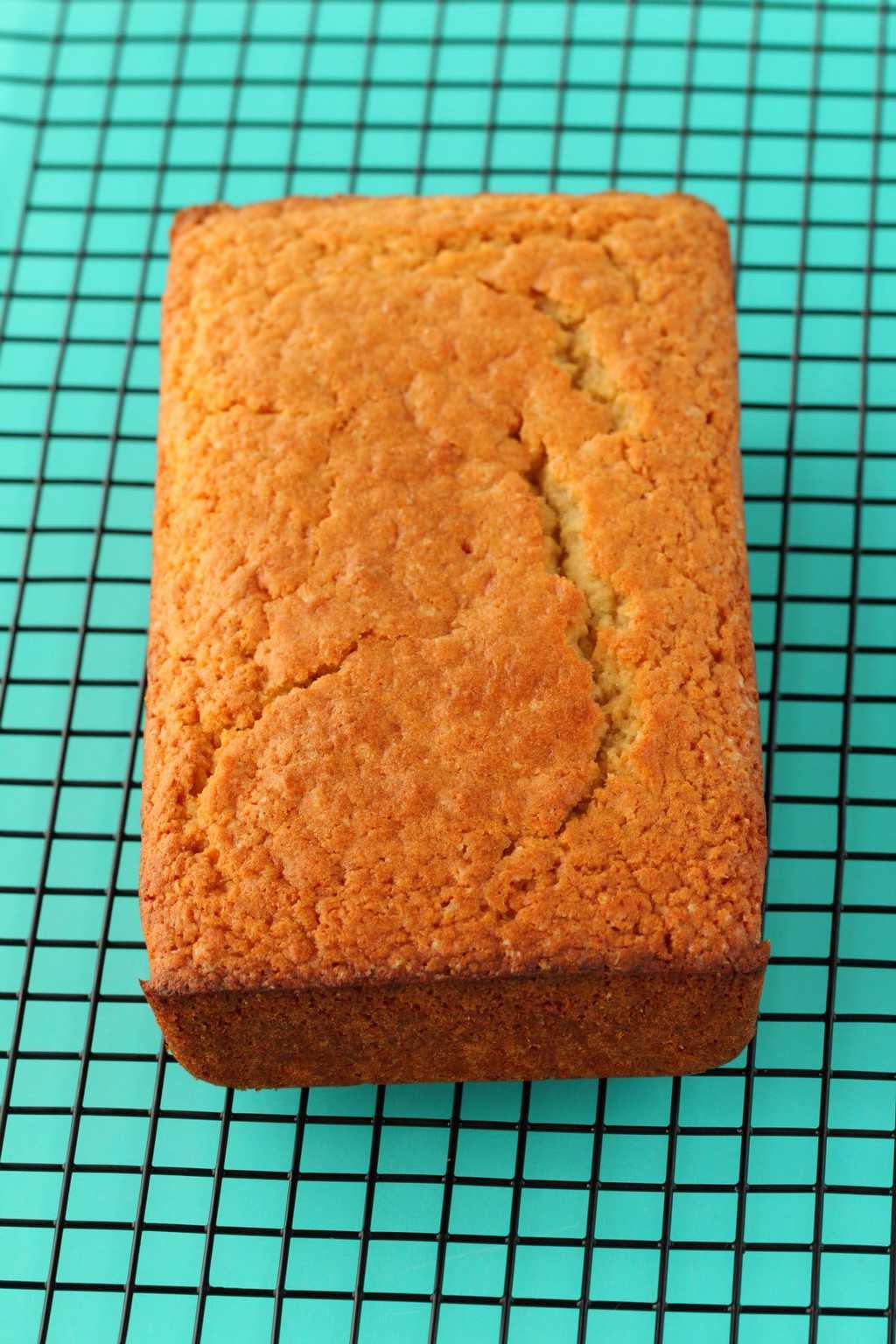 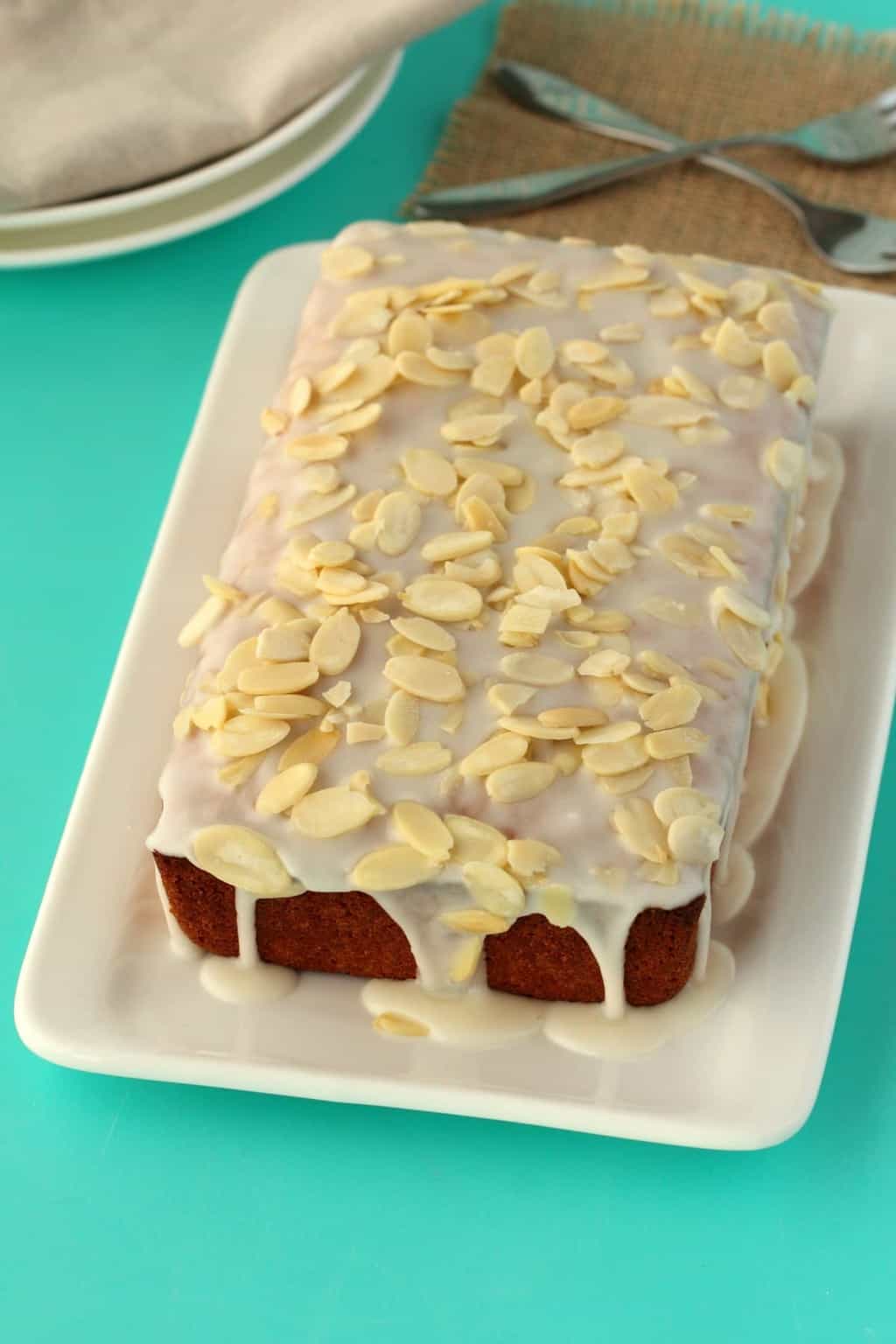 How to prevent your vegan pound cake from over-browning

The other little issue I had was too much browning on top. This cake bakes for an hour. So does my vegan banana bread, but with banana bread, if it gets browned and crispy and caramelized on top it’s just perfect, whereas with this, you don’t want it too brown on top.

The solution? Tent it with foil for the last 20 minutes of baking. And if you’re wondering what ‘tenting’ is, it’s exactly like it sounds.

Take foil and place it in a tent like shape over the top of your loaf pan. It allows it to continue to bake without over-browning on top, while also protecting your cake so that the foil doesn’t push down on it from the top (the reason for the ‘tent’, rather than just putting foil over the top).

Since it’s only for the last 20 minutes, the cake has done all its rising by then so opening the oven at this point to put a foil tent over the top doesn’t interfere with your cake rising and doesn’t cause any sinking side effect. 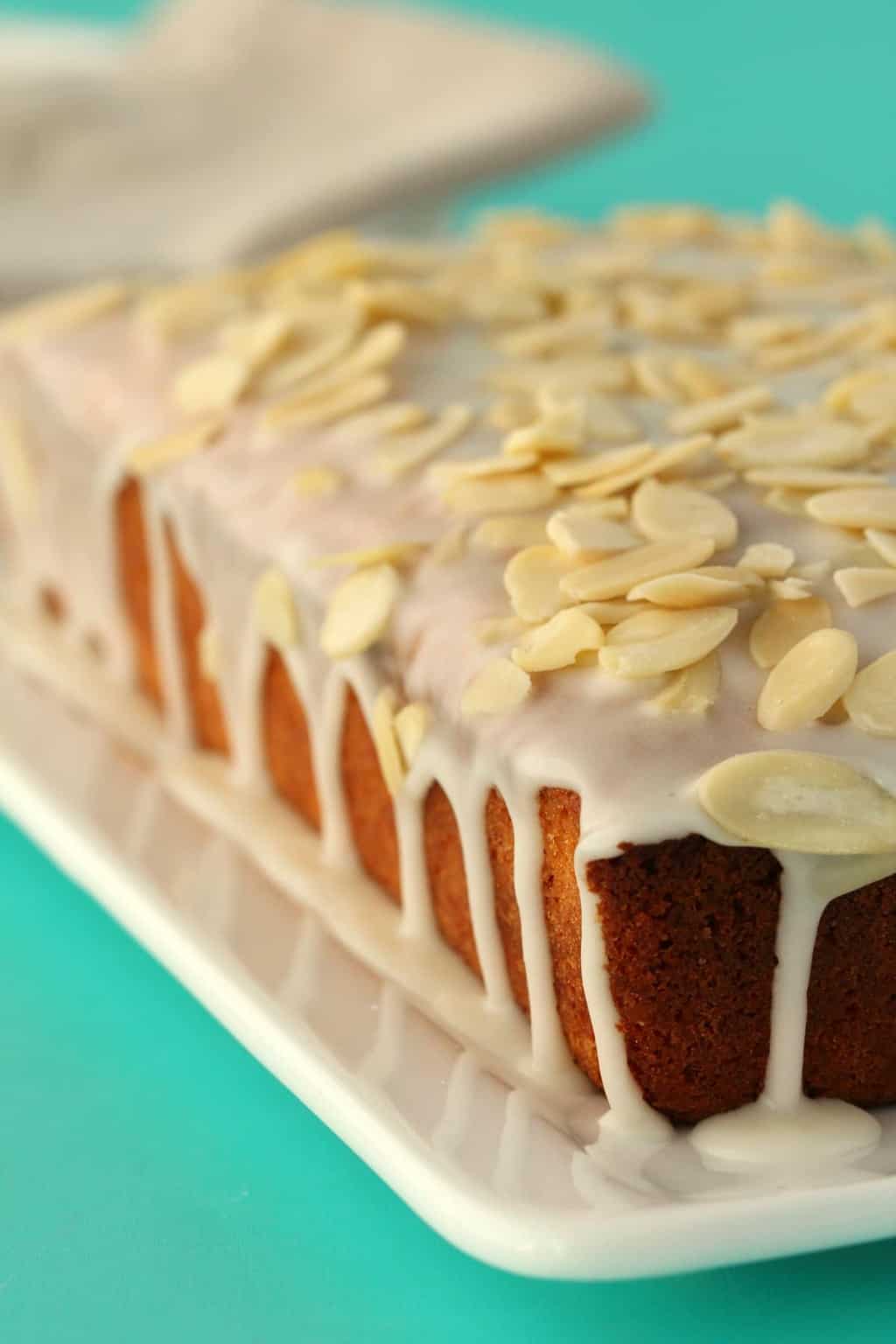 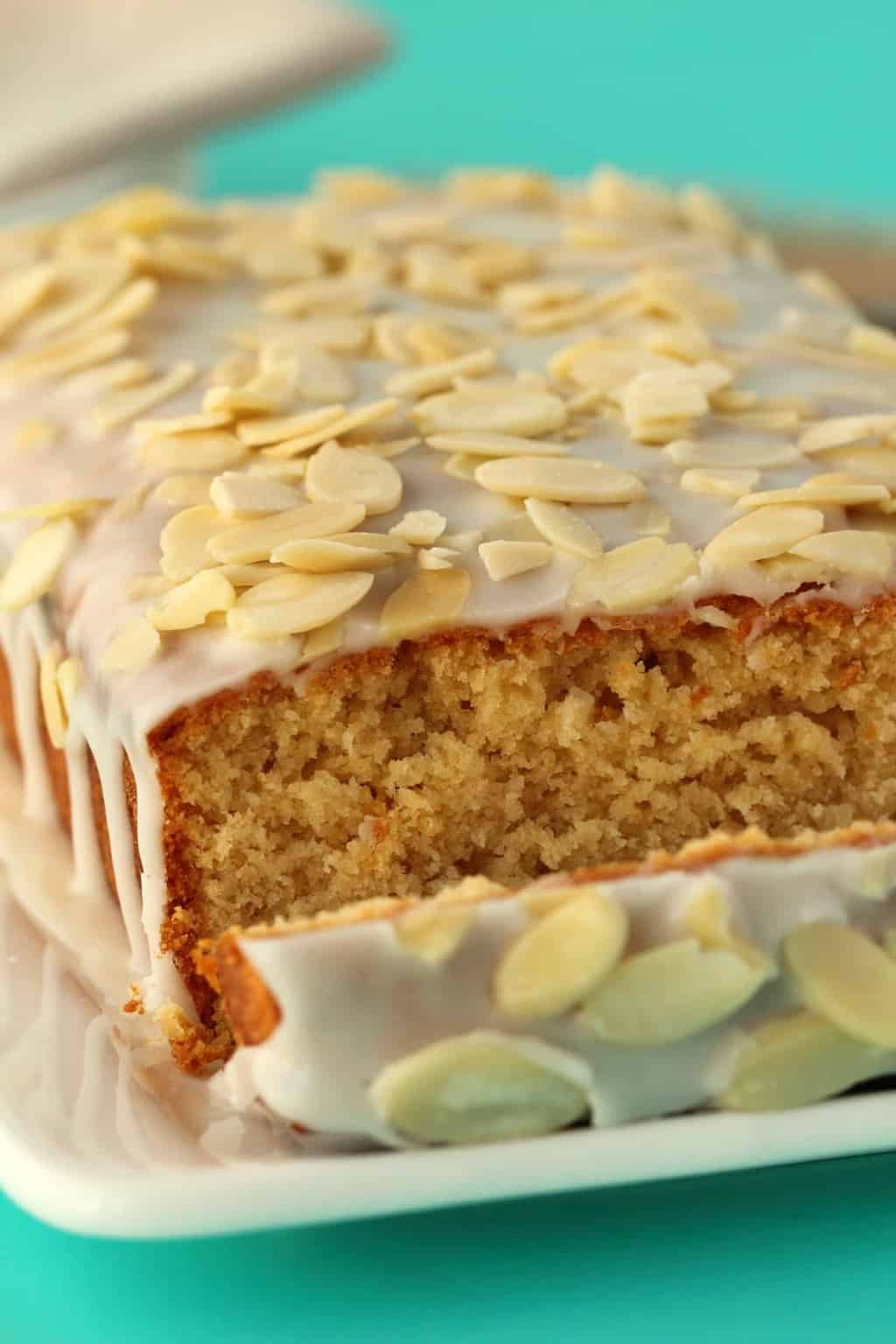 The almond glaze on top was because as delicious as this vegan pound cake is, well sometimes pound cake can be considered a little…. boring.

It’s really quite plain, like you’d probably want to serve it with something else, like a fruit compote and vegan whipped cream or ice cream or something to jazz it up a bit.

But with the almond glaze and lots of almond flakes on top, this jazzes it up very nicely and it looks and tastes absolutely delicious. 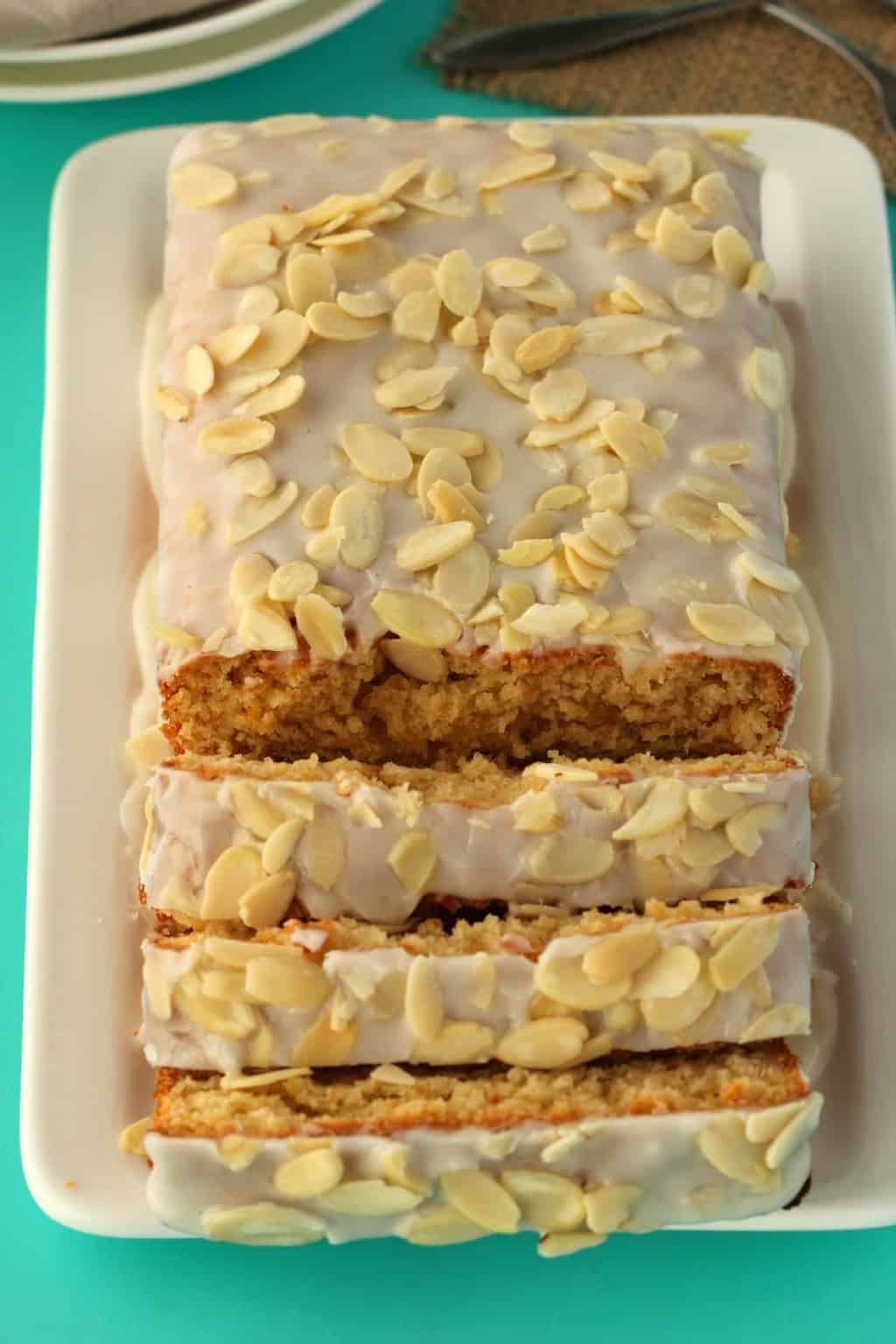 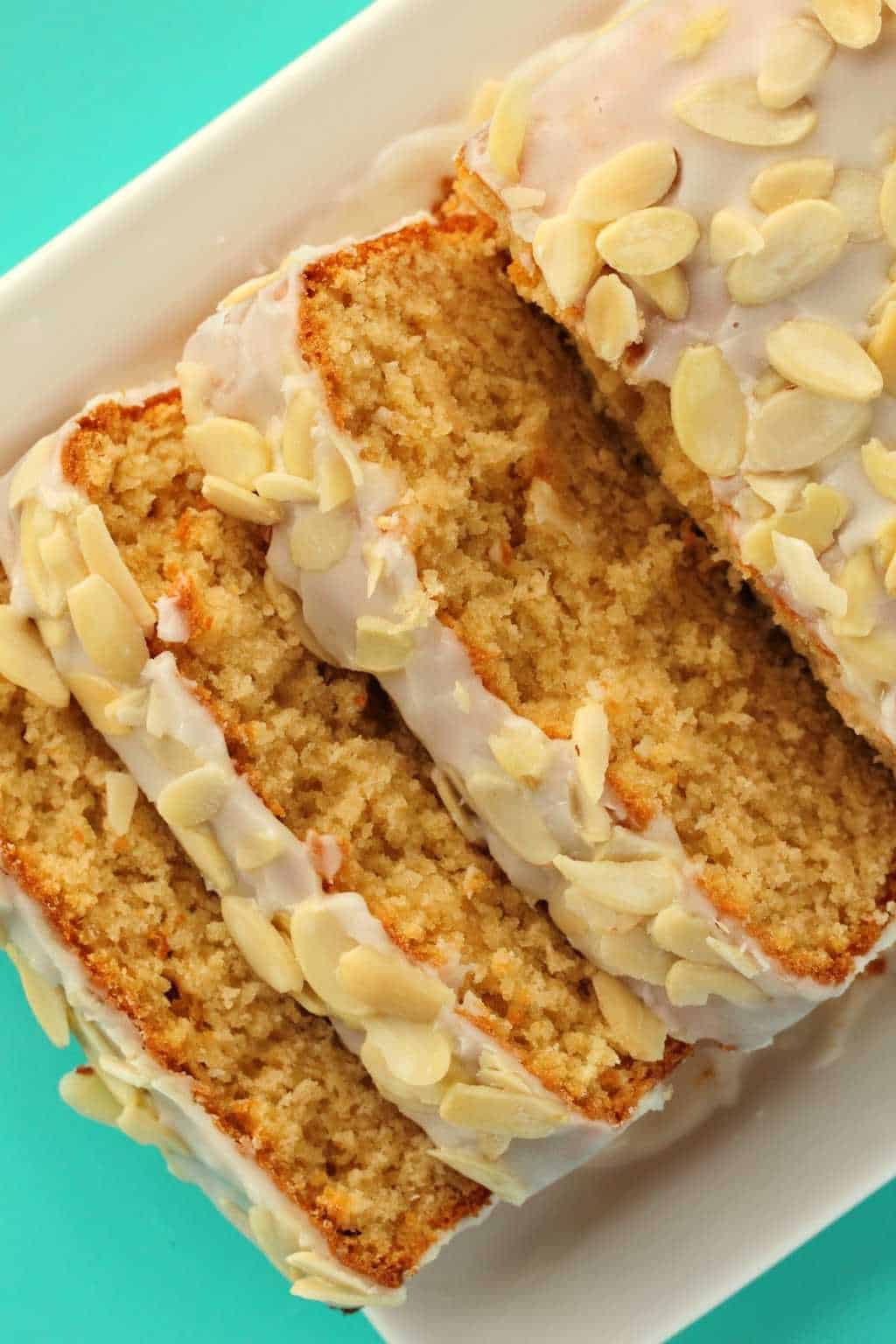 So I really hope you will love this vegan pound cake with almond glaze. It is: 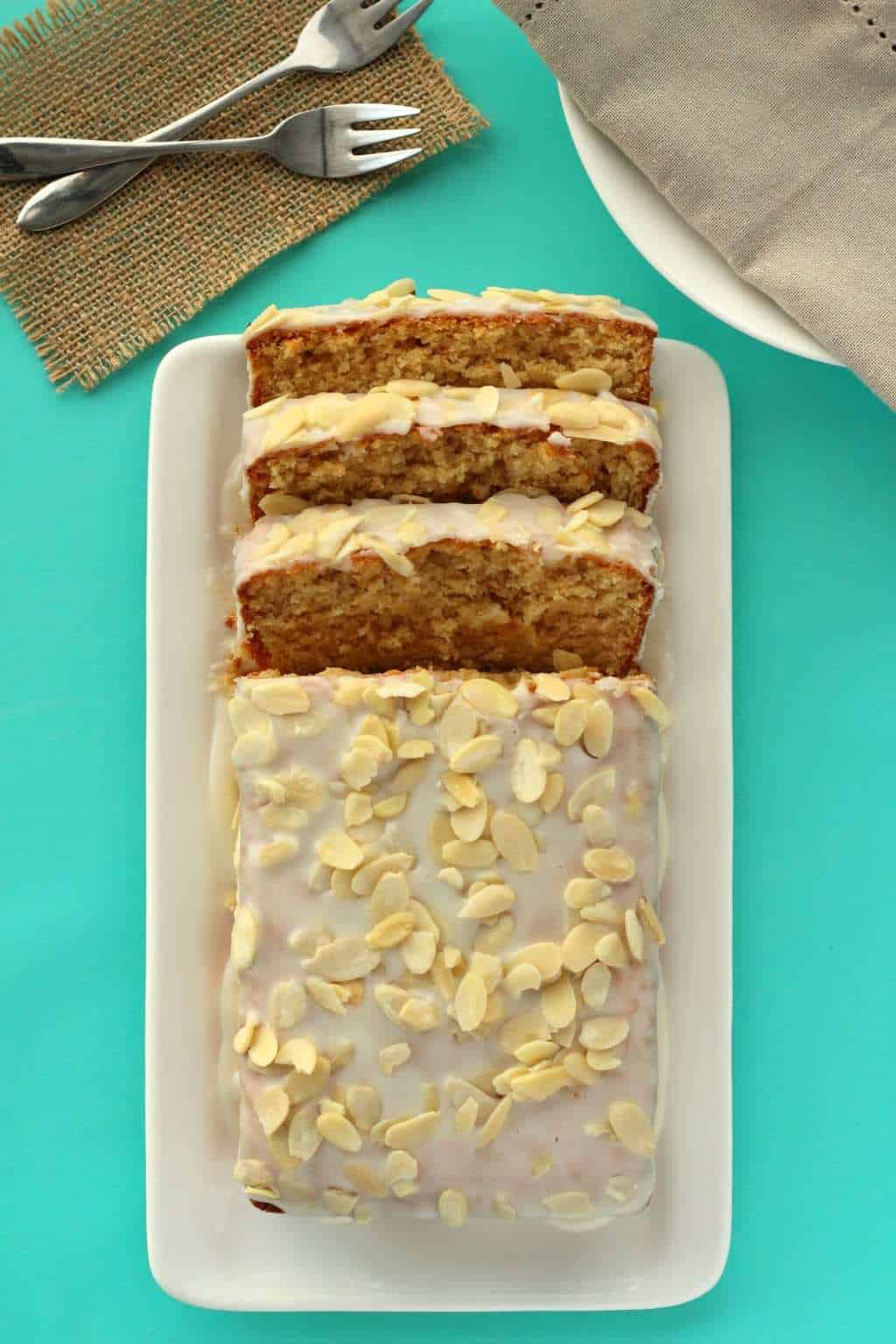 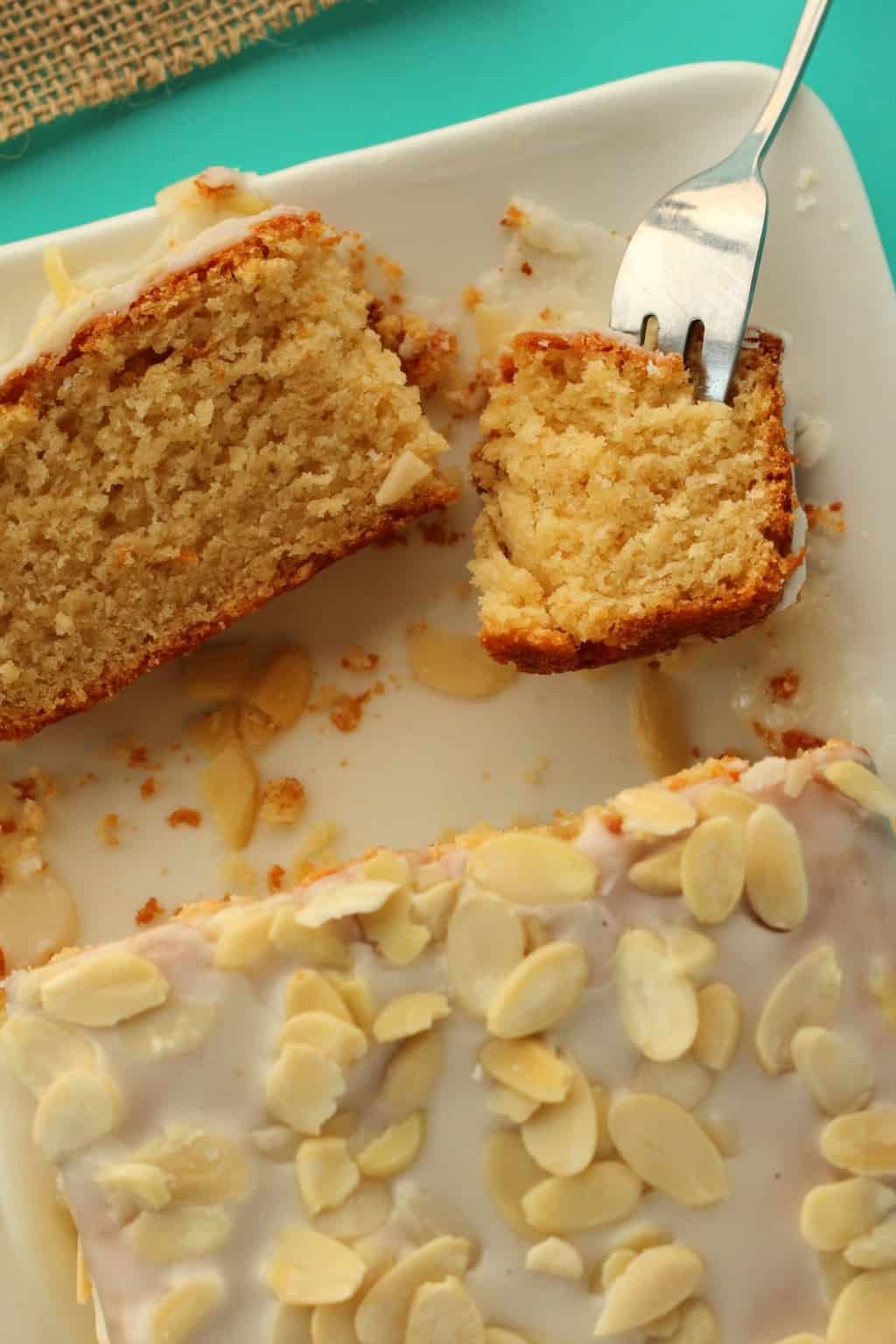 Let us know in the comments what you think of this vegan pound cake and please do rate the recipe too, thank you!

Sign up to our email list for a fabulous (and free) dinner recipes ebook and to stay updated with all our latest recipes posted to the blog. 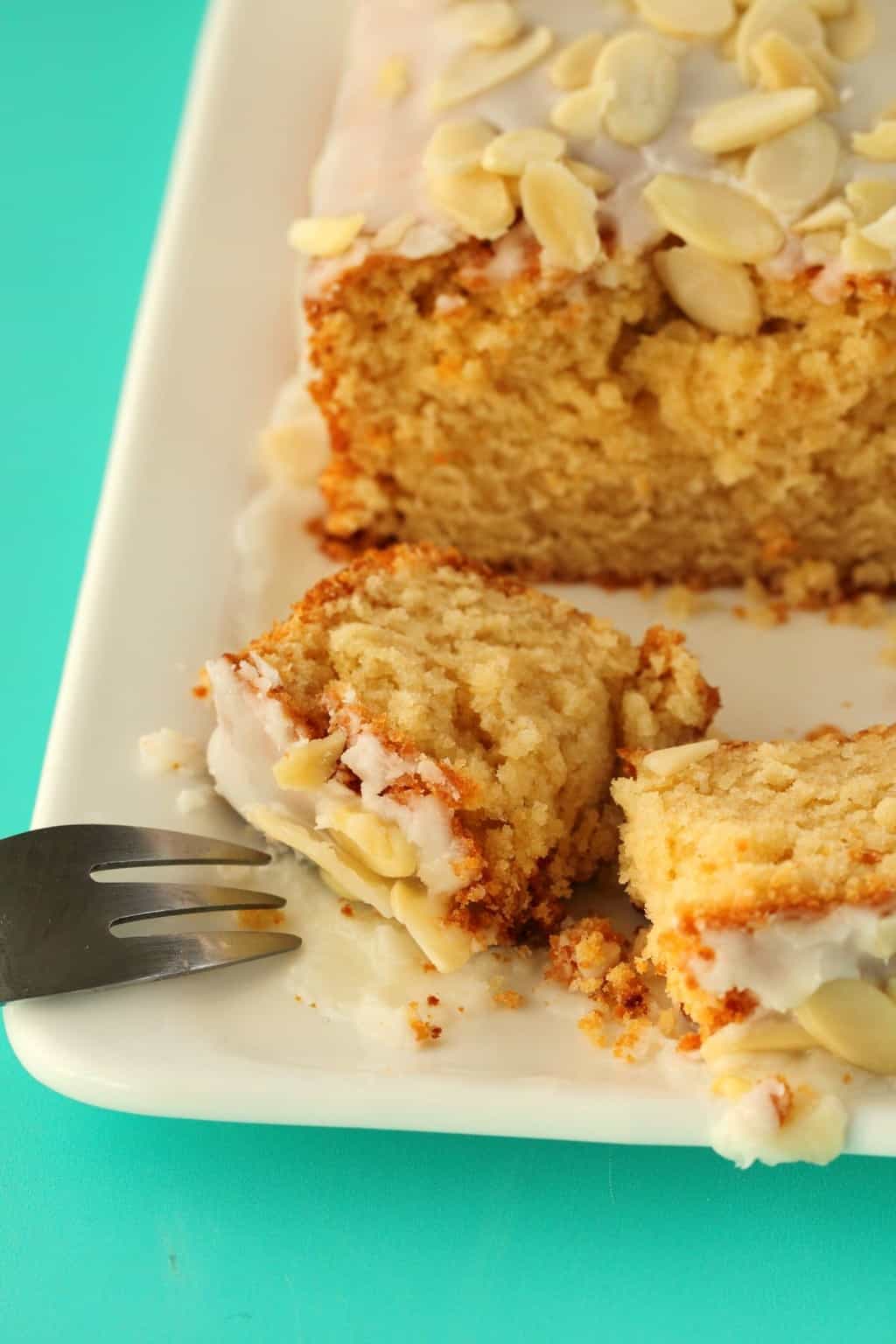 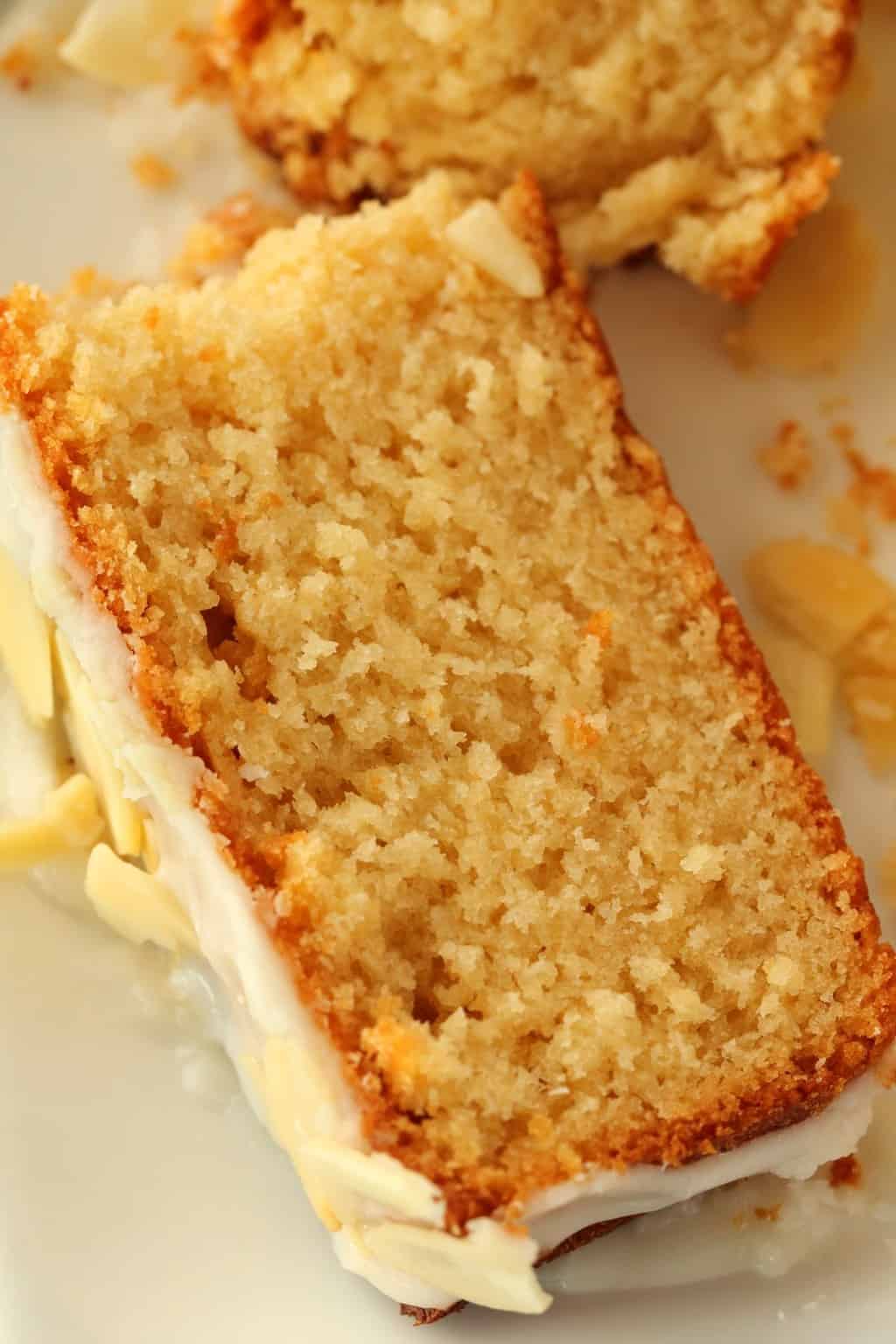 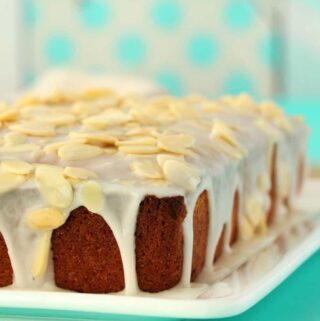 For the Vegan Pound Cake:

For the Almond Glaze Topping: