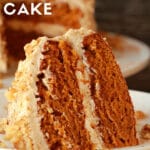 Perfectly moist and utterly delicious vegan pumpkin cake with a cinnamon buttercream frosting. Packed with holiday spices and ideal for any special occasion!

It sort of reminded us of carrot cake. Or a spice cake.

It’s deliciously spiced in the same way that a carrot cake usually is, with the cinnamon and the nutmeg and it’s also sweetened with brown sugar.

This pumpkin cake adds in some ground ginger and cloves too, so it’s really a treat.

So if you like carrot cake, or spice cake, then you’ll love this too!

But try our vegan carrot cake too of course! And our vegan pumpkin cupcakes are based on this recipe and just as good!

How To Make Vegan Pumpkin Cake

When it came to the frosting, I had a look around the web to see what a good pairing usually is and I saw a lot of recipes using a brown butter frosting.

So, naively I set out to try and make one using vegan butter. And oh my what an utter disaster. You don’t even want to know how badly that turned out.

So it seems browning butter really needs actual butter! Hahaha! Who knew (probably everyone). Apparently it’s the milk proteins in the butter that brown, and there ain’t any of those in the vegan varieties!

So then I decided on a cinnamon buttercream frosting and that was just perfect.

There’s cinnamon and other spices in the pumpkin cake and so the pairing with a cinnamon flavored frosting did the job fabulously well.

And then I sprinkled it with some extra cinnamon and tossed some crushed walnuts on top and the result was utterly divine.

Sadly though it seems canned pumpkin isn’t a ‘thing’ around here. I guess pumpkin desserts aren’t really a thing around here either. Maybe folks here don’t realize how good they are!

So I had to do things the old fashioned way and make pumpkin purée from scratch! Was pretty easy really, just bought some ready peeled and chopped pumpkin cubes and baked them on a parchment lined baking tray at 350°F (180°C) for 30 minutes. No spices or oils, just plain.

And when baked, you just let it cool and then puree it in a food processor! The baking part gets rid of any excess moisture so you don’t end up with pumpkin puree that is too ‘wet’. But if you do, you can just stand the pumpkin purée in a strainer so any excess water runs off.

So it was really too easy. Probably still better to use canned though if you can get it, saves time! 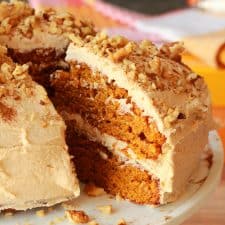 For the Pumpkin Cake:

For the Cinnamon Buttercream Frosting: