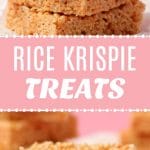 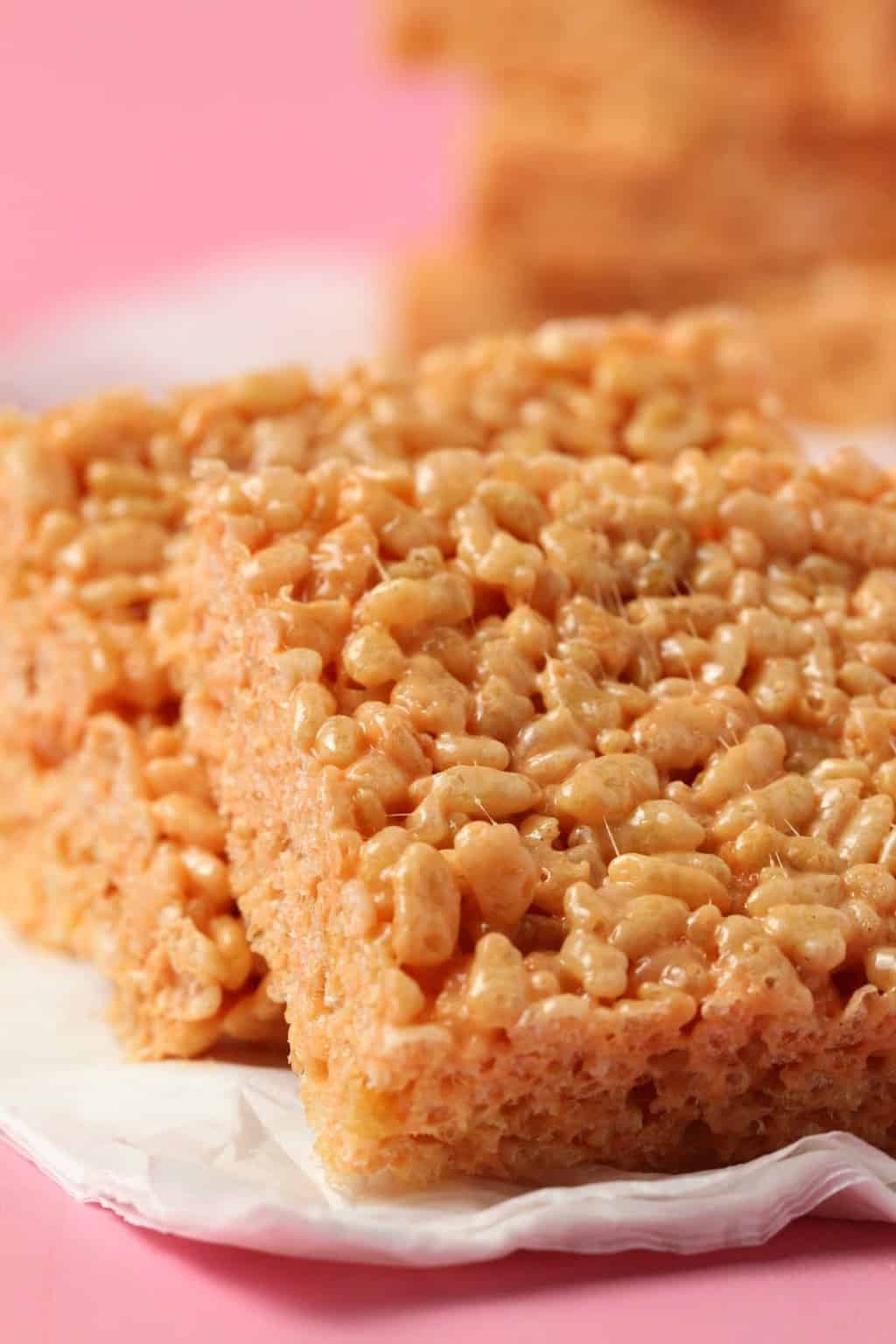 But when I made those I couldn’t get my hands on any vegan marshmallows.

So I always had it in my mind that when I got my hands on some vegan marshmallows I was going to make some more of these treaty treats!

So when I did manage to get hold of some vegan marshmallows I sort of went wild and bought like 15 bags of them! Only to forget about them and have them sit in the cupboard for months.

So imagine my horror when I remembered: oh yes, I wanted to make rice krispie treats and went happily skipping over to my marshmallow cupboard to find that a disaster had occurred (maybe when the marshmallows were delivered to me?). Moisture had got into some of the bags and I had to throw out like 13 bags of them.

I was left with JUST enough to make one batch of these babies! So I could not afford to get this wrong. I proceeded to watch around 2000 youtube videos of people making them, because I had just one shot to get these right.

And yes, what you are seeing below is not your eyes deceiving you, the only marshmallows that survived were marshmallow worms and fishes.

So my ‘process photos’ might be a little different to what you’re used to seeing!

Nevermind, the shapes (and colors) of the marshmallows don’t matter, what matters is that these vegan rice krispie treats were a massive success. Whew!

This dessert comes together FAST. That’s another reason I don’t have all that many process photos to show you. It was just too quick, and since I only had one shot at this, I was super scared to delay any of the steps to get photos.

The only sweetness comes from the marshmallows so this is not an overly sweet dessert. It’s perfectly sweet, but even for people who are not that much of a sweet tooth, this should please the palate! And if you like a bit of crunch, then oh my, this is totally your dessert. 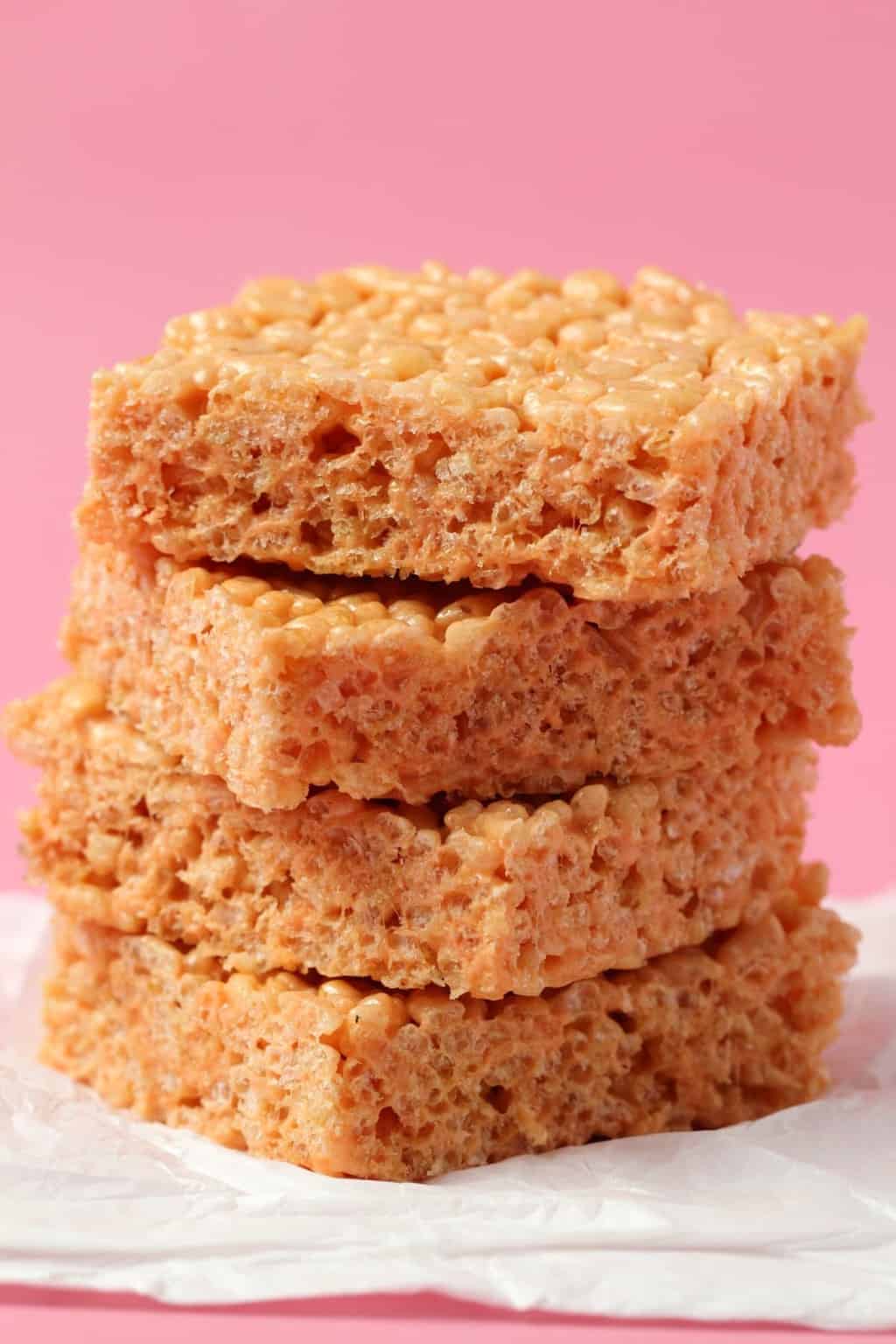 You start off by melting some vegan butter, then you add the marshmallows and stir, stir, stir. They start melting immediately.

Keep stirring until the marshmallows have melted completely, then add some vanilla and stir in. Remove from the heat. Add a heap of rice krispies, stir them in until they’re all coated with the melted marshmallow mix and then transfer to a quarter sheet pan (mine is a 9×13) that has been sprayed with non-stick spray.

I have seen some people butter their hands and use their hands directly (the rice krispies are super sticky) but the parchment paper method worked sooo well that I highly recommend you do it that way. 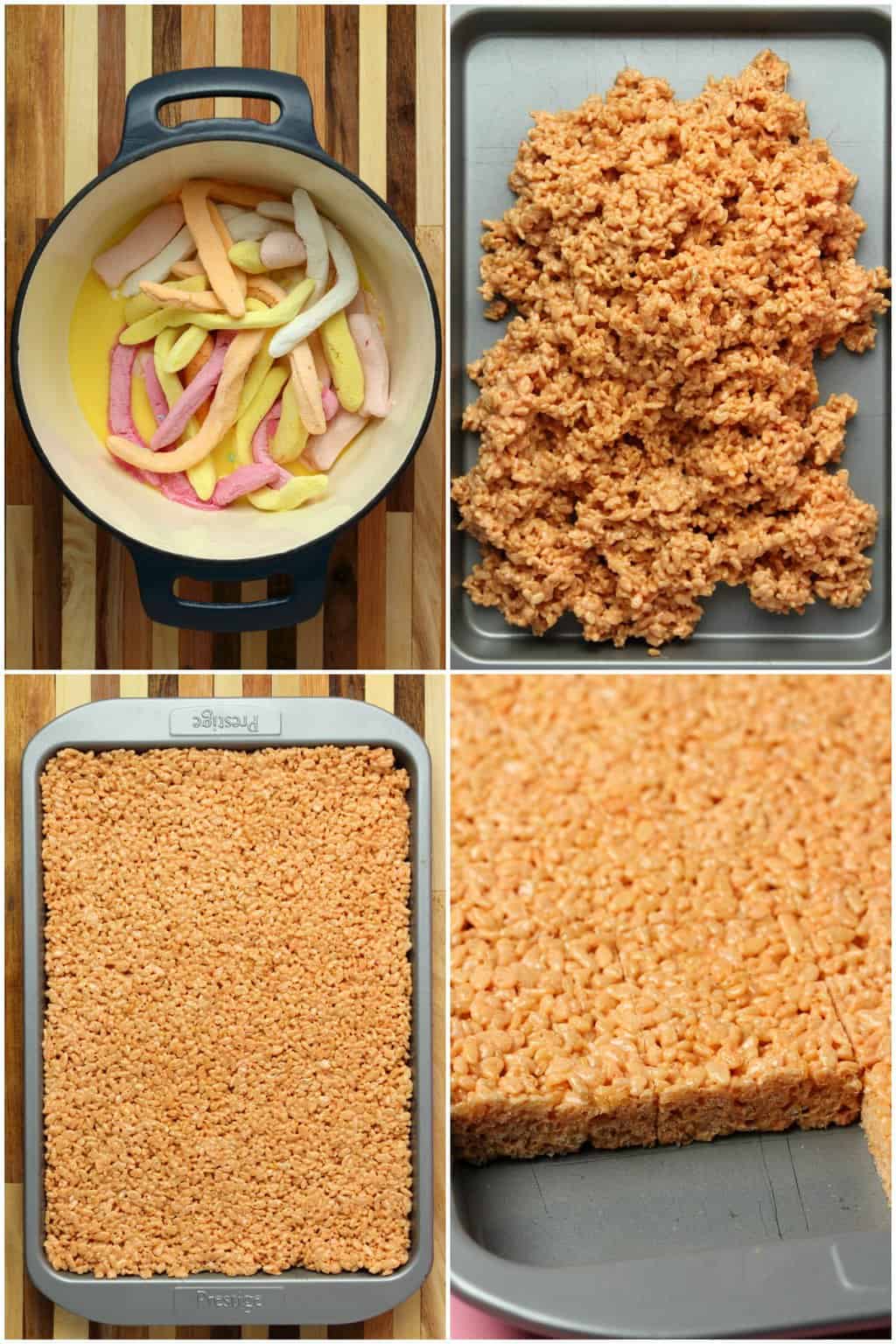 It was also a bit of a mystery what color I was going to end up with, because as you can see I had multiple colors of marshmallow going on there!

Luckily, pink won out and was the dominant color, rather than it turning into some weird in-between color or streaky mix, so that was quite pleasing.

Keep them stored in a sealed container in the fridge and enjoy within 3 days. 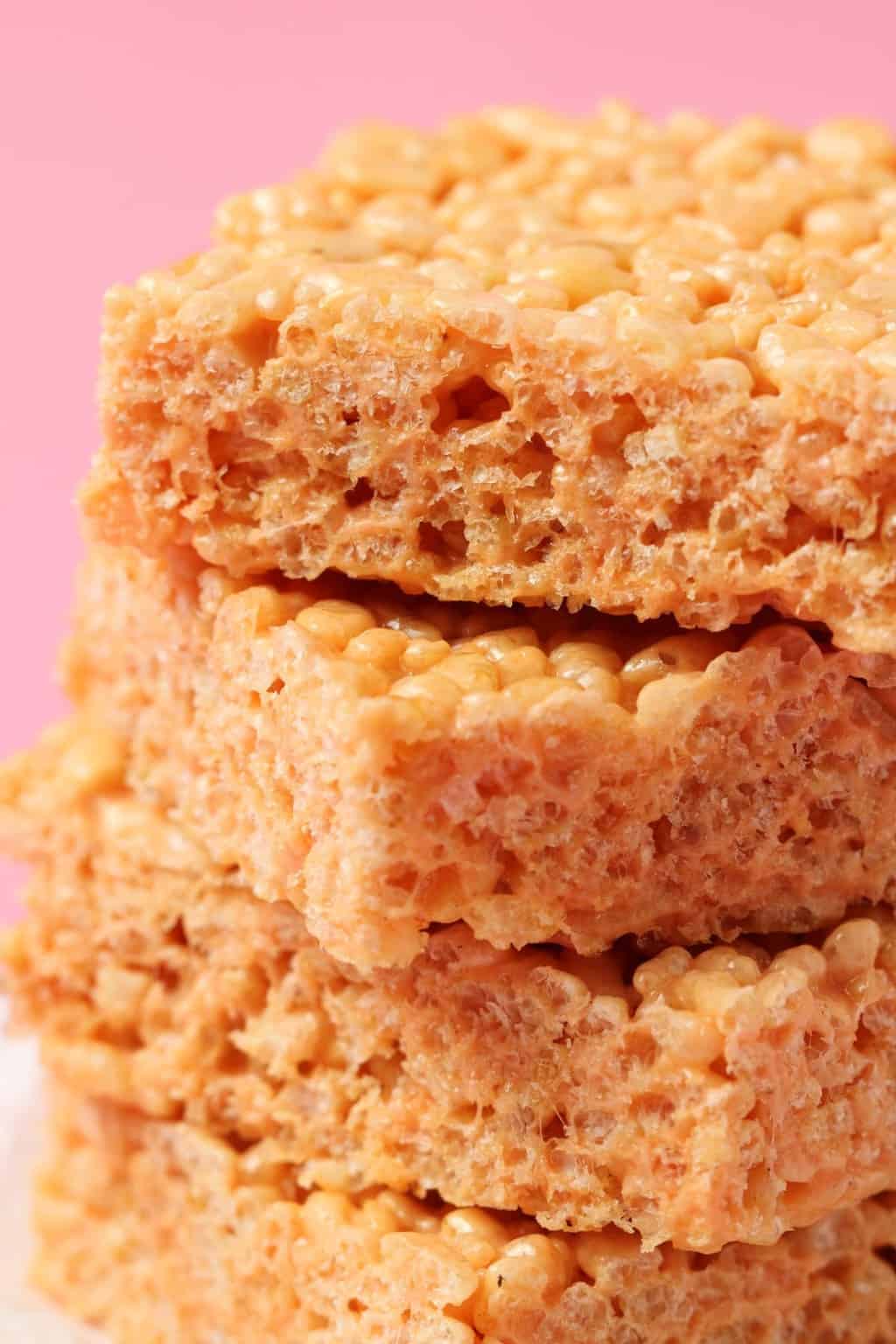 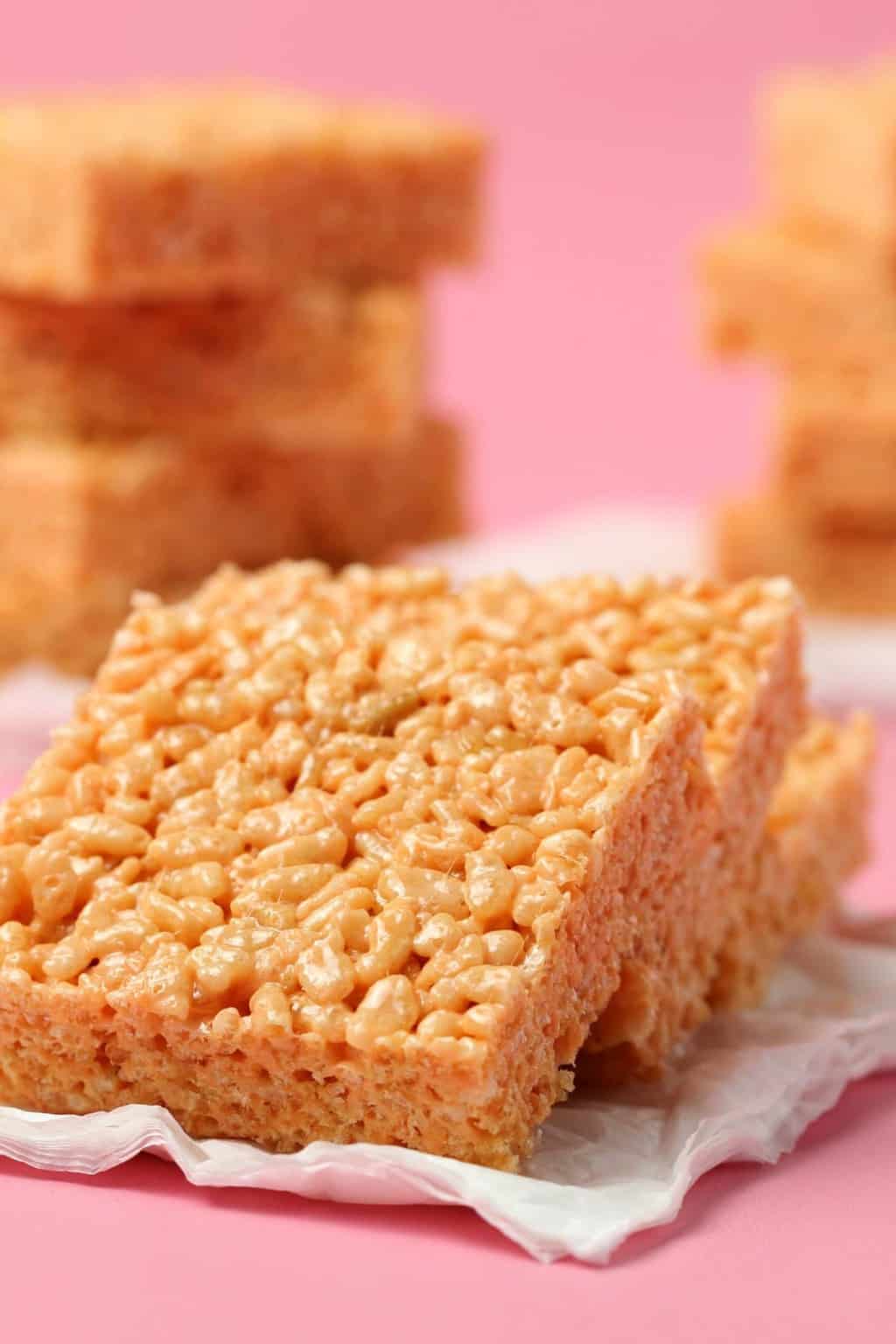 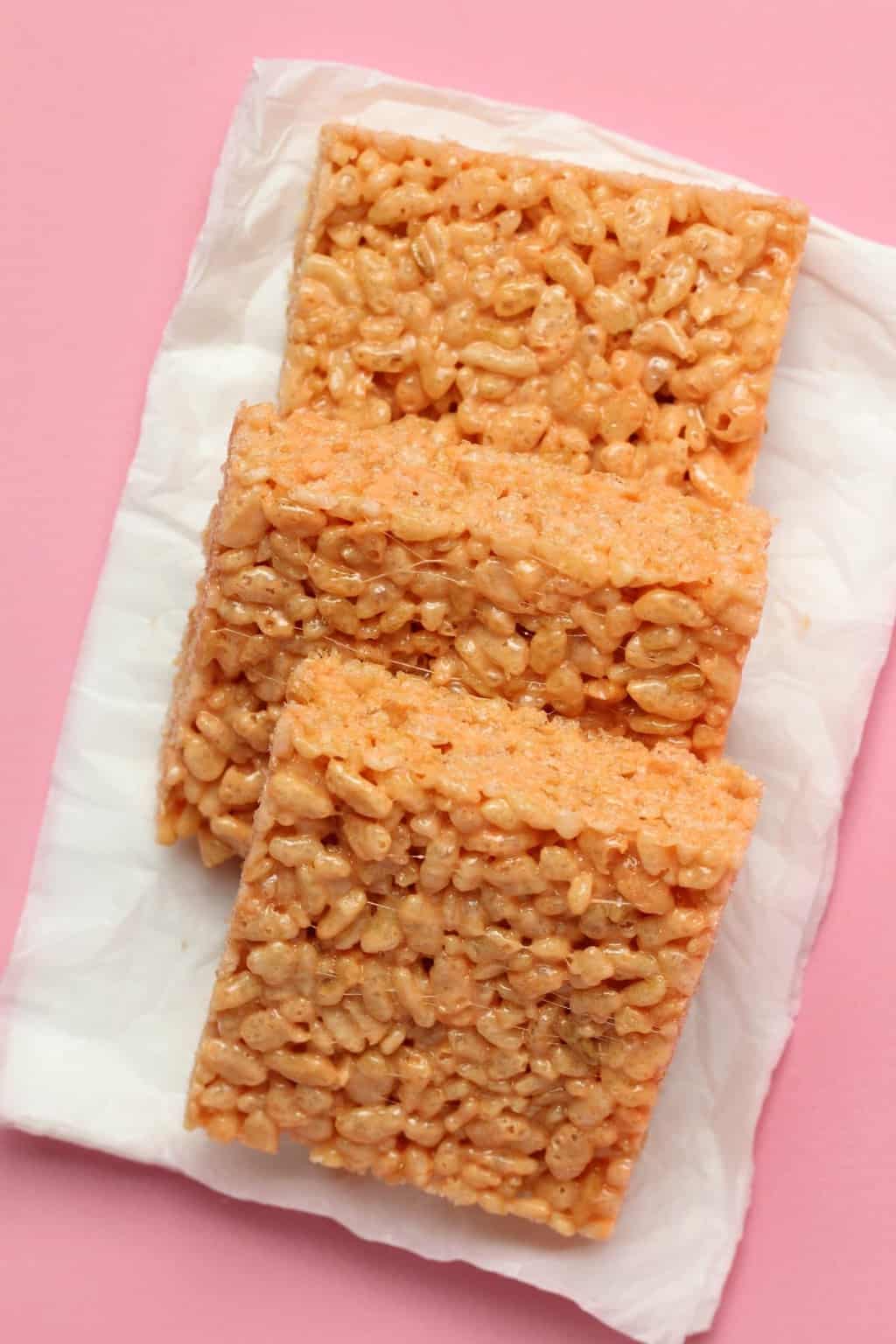 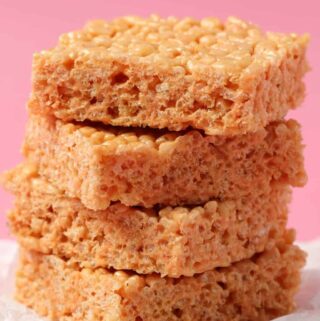