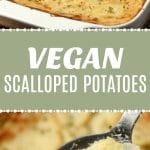 And I present it very formally because I have to make a fuss somehow. Getting this recipe right was kind of a struggle. Just a small struggle.

We made it approximately 12 times. It might’ve even been more. We ate so much scalloped potatoes we pretty much overdosed on them.

But I have to say, when we got it right, it was so darn perfect that it made it all worthwhile.

I mean, it’s a perfect side dish for a special occasion. And thank heck we finally, finally got it right.

Making these vegan scalloped potatoes also gave me some lessons in cooking, things I had never heard of before were learned in this process.

Things like: it’s possible for a white sauce to ‘break’ when baking.

Have you ever heard of such a thing? I hadn’t! Not until I literally saw it in action.

That was with a previous incarnation of this recipe when I was trying it with a bechamel style sauce. I pulled it out the oven after an hour and all looked good, but the potatoes were still too hard, so I put it back in for half an hour, and pulled it out only to see what a sauce ‘breaking’ actually looks like.

It looks like the oil and the starch of the sauce literally break apart. You have oil and then you have starchy bits. Lovely! (Not at all lovely).

I shelved the idea of the bechamel sauce but since we’re talking cooking tips and I brought up the breaking of the sauce story, let me just tell you that I found out that the way to avoid this is to not bring your bechamel sauce to the boil before you use it in a dish that is going to be baked for a loooong time.

Shorter baking periods don’t seem to have any impact. I’ve used bechamel sauce in a lot of baked dishes like vegan lasagna and in a vegan pasta bake with no issues. But if you’re going to be baking something for a long time (more than an hour), this is something that can happen.

How To Make Vegan Scalloped Potatoes

Full instructions and measurements are in the recipe card at the bottom of the post, this is just a summary to go along with the process photos.

Slice the potatoes (and onion) evenly and thinly. This helps them to cook evenly, and a little faster, though, let me not lie, this is not a ‘fast’ recipe, it bakes for a looong time.

You can either use a mandolin slicer to slice your potatoes very evenly or you can slice them by hand. I definitely can’t do perfectly even, thin slices by hand but Jaye can, so I bring him in on important jobs like this.

Blend the sauce very well so that it is completely smooth. It’s a very simple sauce, but you want it to be smooth and completely blended so there is no graininess to it.

Bake it long and slow. The magic formula for this recipe is baking it at 350°F covered with foil for 75 minutes and then removing the foil and baking it for another 40 minutes uncovered.

Which potatoes are best for scalloped potatoes?

Either russet or yukon gold potatoes are going to be great for this if you’re in the USA. If you’re elsewhere in the world, any nice starchy potato that is great for baking is going to work well for this.

No, I don’t think it does. It has more of a ‘cheesy’ creamy type of flavor and texture. I do recommend you use full fat unsweetened coconut milk from the can, as that is what is going to produce the best results for this recipe.

You can definitely make this in advance. The best way to do it is to hold back about 1/2 cup of sauce.

Bake covered in foil for the 75 minutes as usual, but then remove from the oven and leave the foil on while it cools.

When it’s cooled, remove the foil and add the remaining 1/2 cup of sauce, spreading it evenly.

Cover with foil again and place into the fridge. When you’re ready, preheat the oven, and reheat it with the foil on for 20 minutes (just to get to the same point we would be in if we never chilled it), and then remove the foil and bake it for the 40 minutes uncovered (as per the recipe).

Leftovers keep very well covered in the fridge. I should know, we had so many leftovers from the roughly 1 million recipe tests! Leftovers will stay good for at least 3 days and likely more.

For the Potato and Onions:

*This must be canned full fat unsweetened coconut milk. Don’t use a sweetened drinking coconut milk as it won’t work well at all in this recipe.

*It’s not essential that you weigh the potatoes, you can also eyeball it and have it be a little more or less, but the ideal ratio of potatoes to sauce is going to result in the best ‘look’ for this dish. But no matter what, it’s going to taste great!

*Spray your baking dish with non-stick spray if you think there is any chance of it sticking. The dish I use never sticks so I didn’t use it, but you may need to.

*This recipe was first published in December 2018. It has been updated with extra tips but the recipe itself is unchanged.