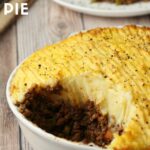 Filling and comforting vegan shepherd’s pie made with a veggie-packed veggie mince and creamy mashed potatoes and baked to perfection.

This vegan shepherd’s pie is what dinner dreams are made of!

Jaye was the one who created this recipe – he’s great with the savory stuff – and he wanted to experiment with chopping up mushrooms super fine and putting them in with the veggie mince to create a really hearty texture. And oh wow it worked fabulously.

This veggie mince was amazing. And topped with some creamy vegan mashed potatoes this is a super satisfying vegan dinner meal.

It’s comfort food to the max, that is for certain! And if you love vegan comfort food as much as we do then you’ll also love our vegan baked ziti and vegan goulash.

How To Make Vegan Shepherd’s Pie

Peel and chop potatoes and add them to a pot. Cover with water and bring to the boil. Let them cook for 20-25 minutes until the potatoes are soft and cooked.

When they’re nicely soft and cooked you mash them up with some vegan butter, non-dairy milk and salt and pepper.

Add mushrooms to the food processor and process them until finely chopped. They will barely even resemble mushrooms anymore, this is ideal!

Add chopped onion and garlic to a pot with olive oil and sauté until softened.

Sauté the mince or TVP with the onions and garlic until it’s nice and soft and browned.

Add the finely chopped mushrooms, soy sauce, maple syrup, dried basil and oregano and tomato paste and mix it in.

Transfer all the veggie mince to a pie dish (a rectangular or square dish is also fine).

Top it with all the mashed potato.

Create some nice ridges in the top with your fork (looks pretty and helps with browning).

Top it with some knobs of vegan butter and a sprinkle of ground black pepper.

This meal does take a while, you’re looking at 75 minutes at least if you’re fast, but more likely 90 minutes from starting this meal to having it on the table.

But it feeds a fair few people, at least 6 and leftovers store really well. So if you’re only cooking for two, you can have this for dinner 3 nights in a row (and you won’t mind a bit!).

The first time we made this shepherd’s pie we made it using a frozen soy mince. This worked great, but a couple of readers wrote in to us saying that this wasn’t something they could get hold of.

It works REALLY well in this recipe and if you don’t find it locally, you can definitely get it on Amazon. We used Bob’s Red Mill TVP.

It keeps super well in the fridge for 3-4 days so leftovers are not going to be an issue at all. You can reheat it in the microwave or in the oven at 350°F until heated through.

It’s also freezer friendly for up to 3 months. Thaw it in the fridge overnight and then reheat in the microwave or in the oven at 350°F until heated through. 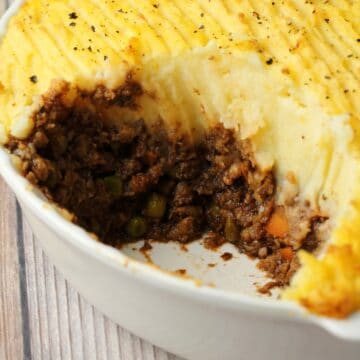 For the Veggie Mince:

For the Mashed Potatoes: