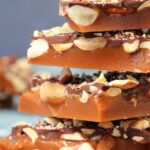 Creamy, buttery vegan toffee topped with salted nuts and vegan dark chocolate. This sweet and salty treat is totally over-the-top decadent and perfect for the holidays.

This vegan toffee is the best thing you’ve ever tasted. It’s buttery, sweet and melts in your mouth!

It’s the most decadent over-the-top dessert and totally perfect for holiday season.

Have you ever made homemade vegan toffee before?

This was a first for me. And I have to admit I was surprised at the whole experience. My idea of toffee before was the chewy stuff, whereas this is more like brittle.

I always used to call my fudge flops ‘toffee’. You know when you try and get the perfect crystallized sugar for old fashioned fudge but it goes wrong somehow and you end up with something very soft and chewy? That’s what I always called toffee.

But that’s not what toffee is all about. Think of toffee apples. The toffee on top of the apple is hard. Yep, that’s what we have with this vegan toffee.

Whereas brittle usually cooks up to the hard crack stage.

So it’s a little softer and it melts in the mouth with a very slightly chewy texture right at the end. When it’s mostly melted away in your mouth and there is a small amount left, that can be a little chewy, but on the whole, you won’t notice a big difference between this and brittle.

If you want a great vegan brittle recipe, then you should definitely try our vegan peanut brittle.

How To Make Vegan Toffee

As you can see I tried really hard to photograph the process in detail!

Jaye set up the camera above the stove and just snapped pics the whole way through because I could not stop stirring, not even for a second.

Some people say you can just stir it every minute or so, but I don’t trust that method!

I am very wary of candy making and don’t feel safe to take my eyes off it for a second. I am a believer in the keep stirring all the way through method. This is how I make my vegan honeycomb and now it’s how I make toffee too.

I did try different things with this toffee but this version was the absolute best.

And then I tried a version with water rather than soy milk and that worked well, but the color was much lighter and the end result was less creamy. So I definitely prefer this version with soy milk.

If you have an issue with using soy milk though, then I would recommend trying it with water.

Okay so let’s go through the steps.

So, this was my first go-round in making proper vegan toffee, but I have been making candy for a long time. I’m a massive fudge fan, the kind of fudge that you make on the stove and bring to soft ball stage and then beat until it sets.

I’ve made a LOT of that kind of fudge over the years. And that process is similar to this.

And I’ve also made vegan brittles. So what seems easy to me, may not be easy at all and I must just point it out that you may find this recipe a bit intimidating the first time you make it.

But that’s why I’m going to try and give you as many tips and tricks as I can think of so that it works out great the first time you make it and every time thereafter.

The first thing you need is a candy thermometer. You absolutely cannot make this without one. If you don’t have one, then order one now. You can get one on Amazon. And hold off on making this recipe until it arrives.

There is just no way to be accurate about the temperature and know when you’ve reached soft crack stage, without it. Don’t listen to any recipe that tells you to judge it by color or how it feels when you stir it, it’s not possible.

The next thing you need is a heavy bottomed pot. Don’t try and do this in any lightweight pot. You need it to have a heavy thick bottom.

If you use a pot with a thin base, it will easily burn your toffee, you need a pot that is heavy duty and can withstand a very high heat.

Basically, it should be the kind of pot that when you pick it up you complain that it’s quite heavy and your arms are getting tired.

And then you need a wooden spoon to stir with, and a nice well rested arm because you’re going to stir like crazy!

Have everything ready to go when you start. Don’t start the toffee until you have the following things in place:

Once you start making the toffee, you won’t have time to go and fetch things so have it all ready before you start.

You Will Love This Vegan Toffee

It’s wonderfully sweet with a hint of salty. The main flavor is sweet, but we have used some salt in the recipe and then there is the roasted salted nuts as well, so the flavor is very well balanced between salty and sweet.

It’s creamy and buttery. Oh my, is it ever!

It’s topped with salty nuts and rich vegan dark chocolate! Nuts and chocolate together are already one of my favorite things, now put that on top of delicious creamy buttery hard toffee and you have pure bliss.

The color is so beautiful. It’s this gorgeous amber color, it really looks as good as it tastes. 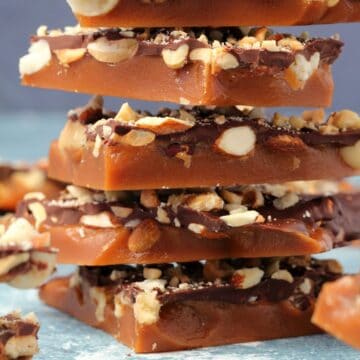 For the Vegan Toffee: