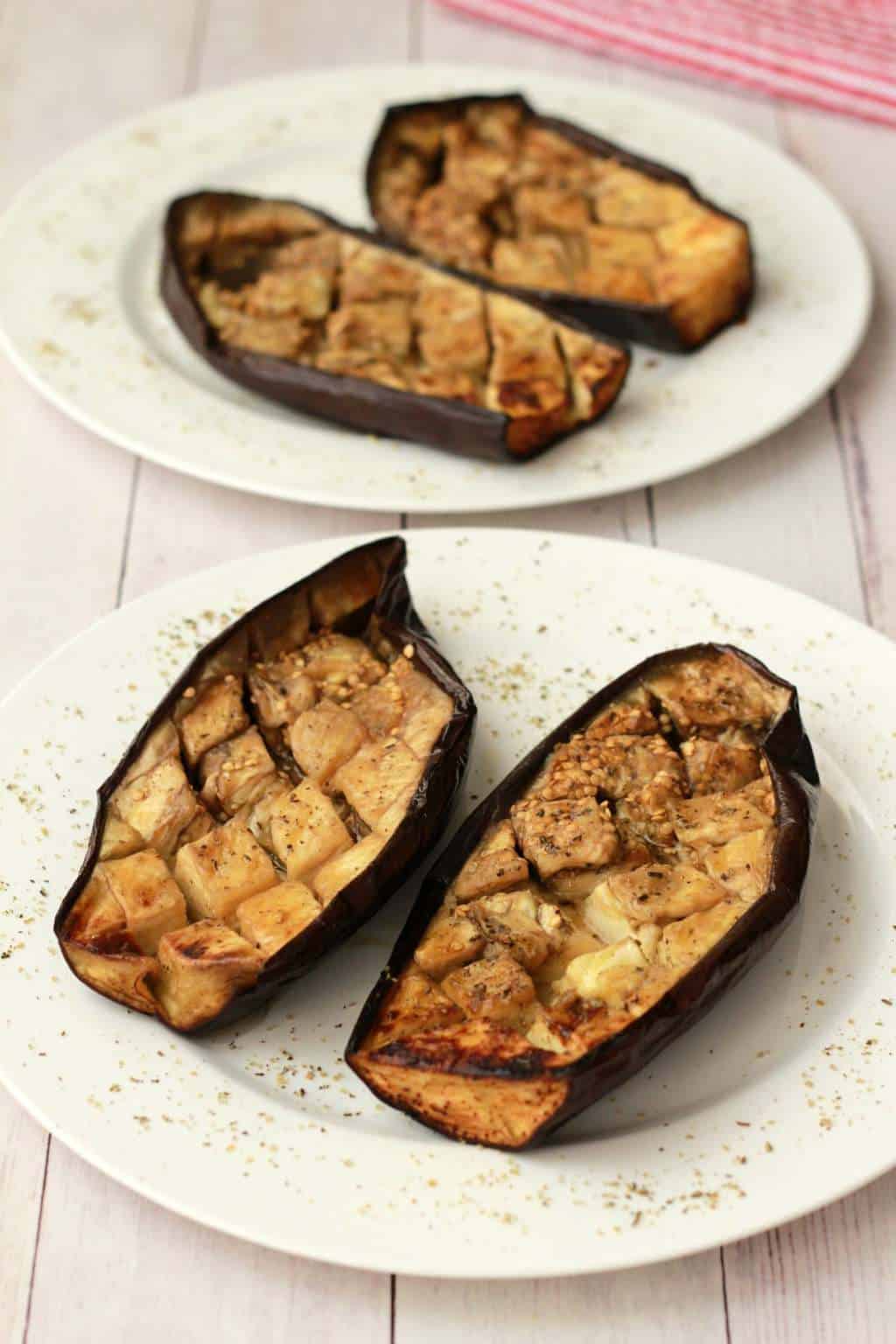 The other week my sister and brother-in-law got a sitter for their kids and came over to cook us dinner, at our place.

It was quite a treat! They made the main course and we supplied the dessert. Honestly as a food blogger this was no trouble, I had like 3 different kinds of desserts on hand (#RecipeTesting)

Anyway, one of the things they cooked for us was roasted eggplant.

Now as a longtime vegetarian and then vegan, well you know I’ve been fed eggplant many times in my life. In fact this is often the go-to thing to serve vegans/vegetarians when various non-vegan chefs have no idea what vegans like to eat! But this was way different.

I can tell you that I had never had roasted eggplant quite this good!

The thing is with eggplant, it’s often served really oily, which I dislike. But my sis and bro, well, they got it right in the best possible way!

So I had to get the recipe from them and experiment for myself. 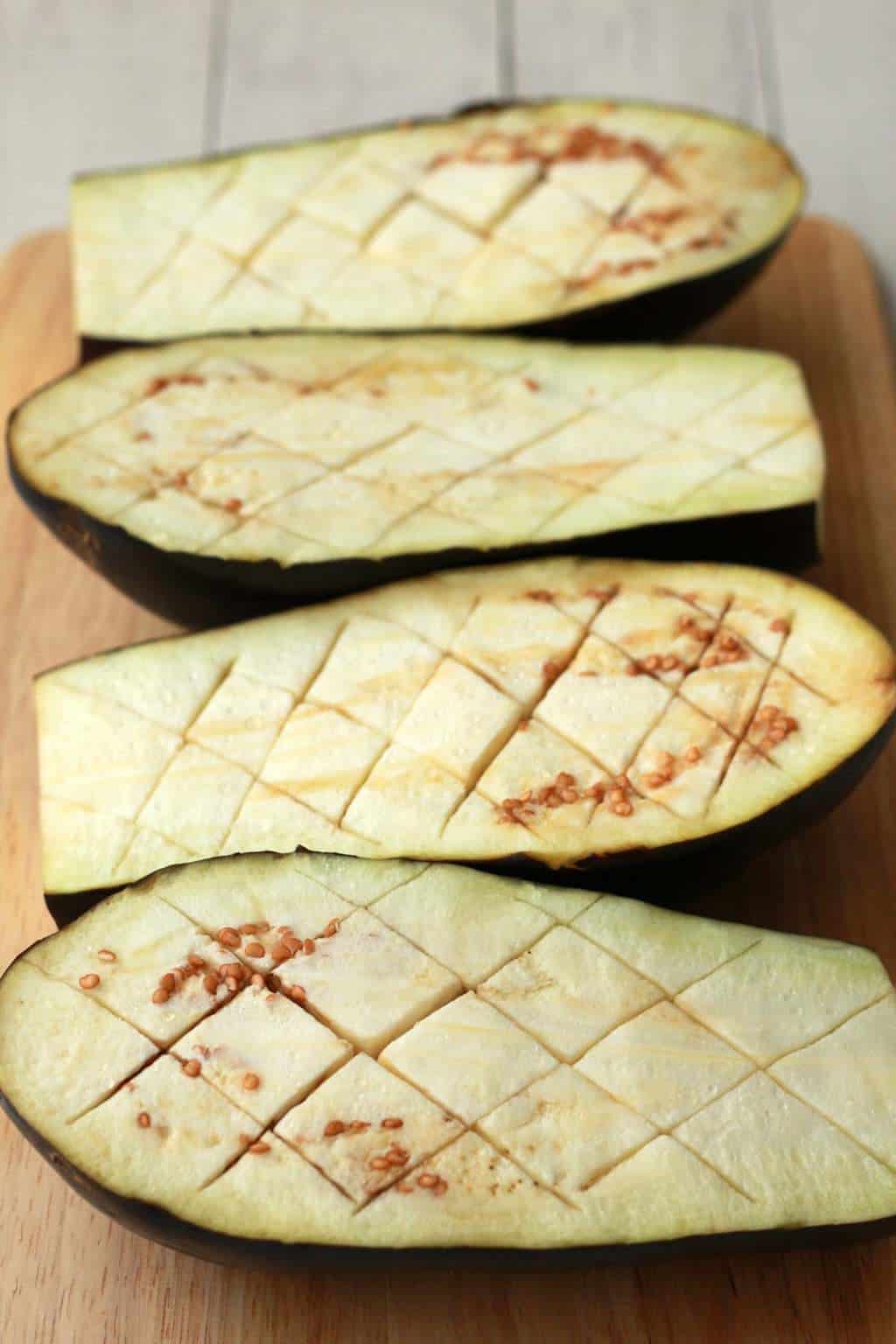 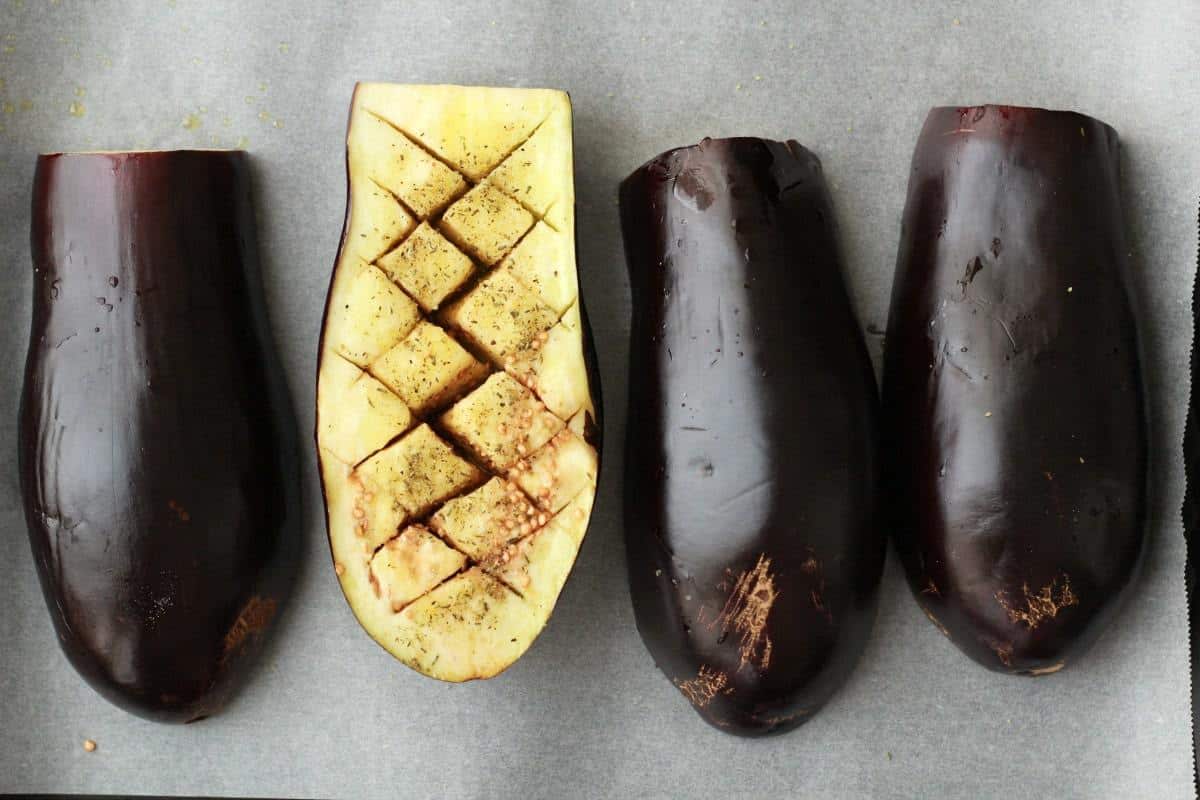 So it’s really easy, you just take 2 eggplants and cut them in half. Then you take a knife and cut deep diagonal lines from one side to the other and then you cut diagonal lines the other way so they intersect each other.

Then you sprinkle salt all over the tops, and squeeze them on each side to open up the diagonal grooves and get some salt down there as well. Then you let them sit (face up) for 30 minutes for that salt to draw out some excess moisture and any bitterness from the eggplant.

After 30 minutes, you squeeze off the excess water, blot any excess salt off the tops with a paper towel (just a light blotting, no need to try and wipe salt off, some saltiness is good!)

Then you brush with olive oil, sprinkle with dried rosemary and then transfer to a parchment lined baking tray and bake (upside down) for around an hour. 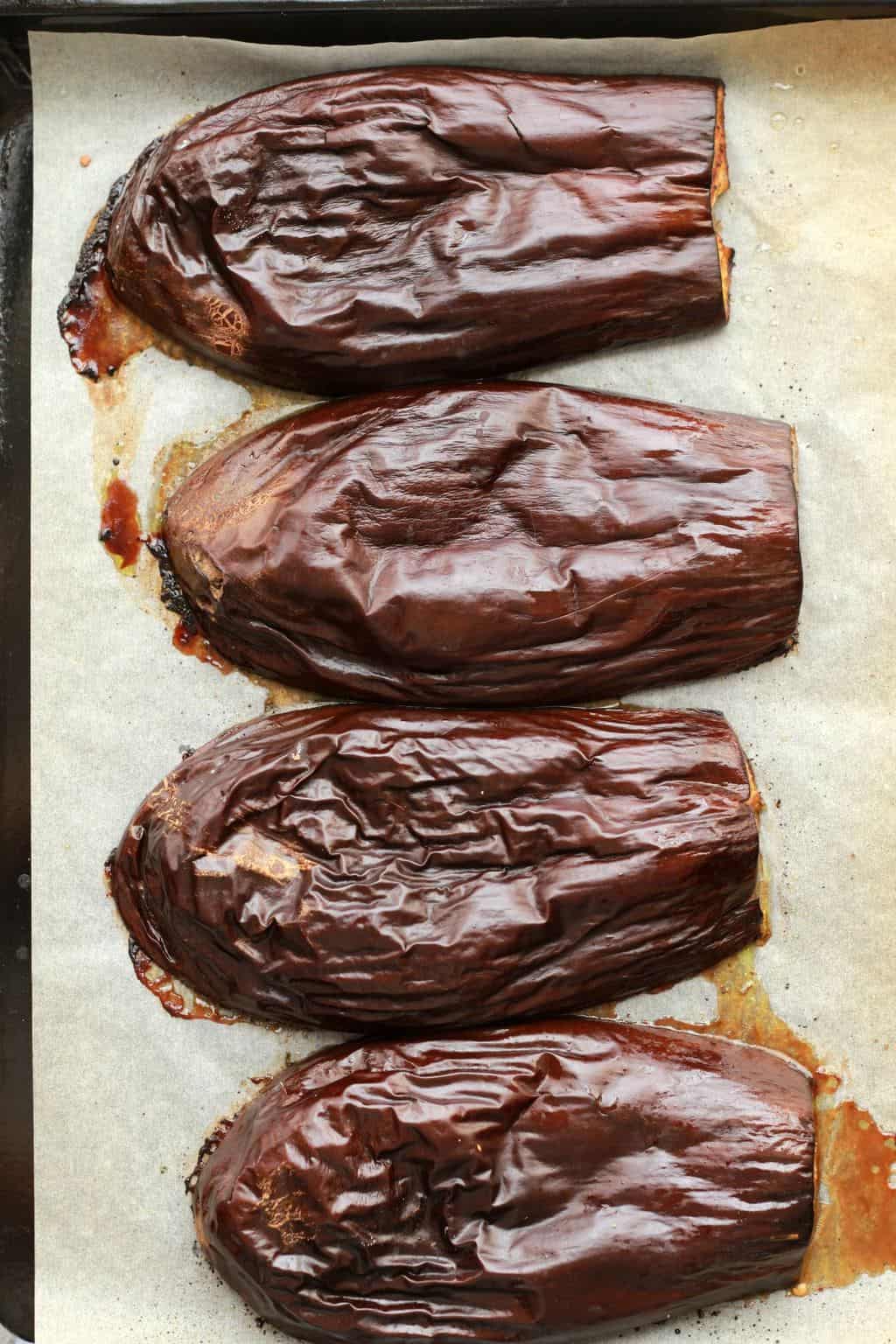 The eggplants will collapse as you see above when they are cooked.

Then you take them out of the oven, and let them cool for around 20 minutes before flipping them over with a spatula and serving! 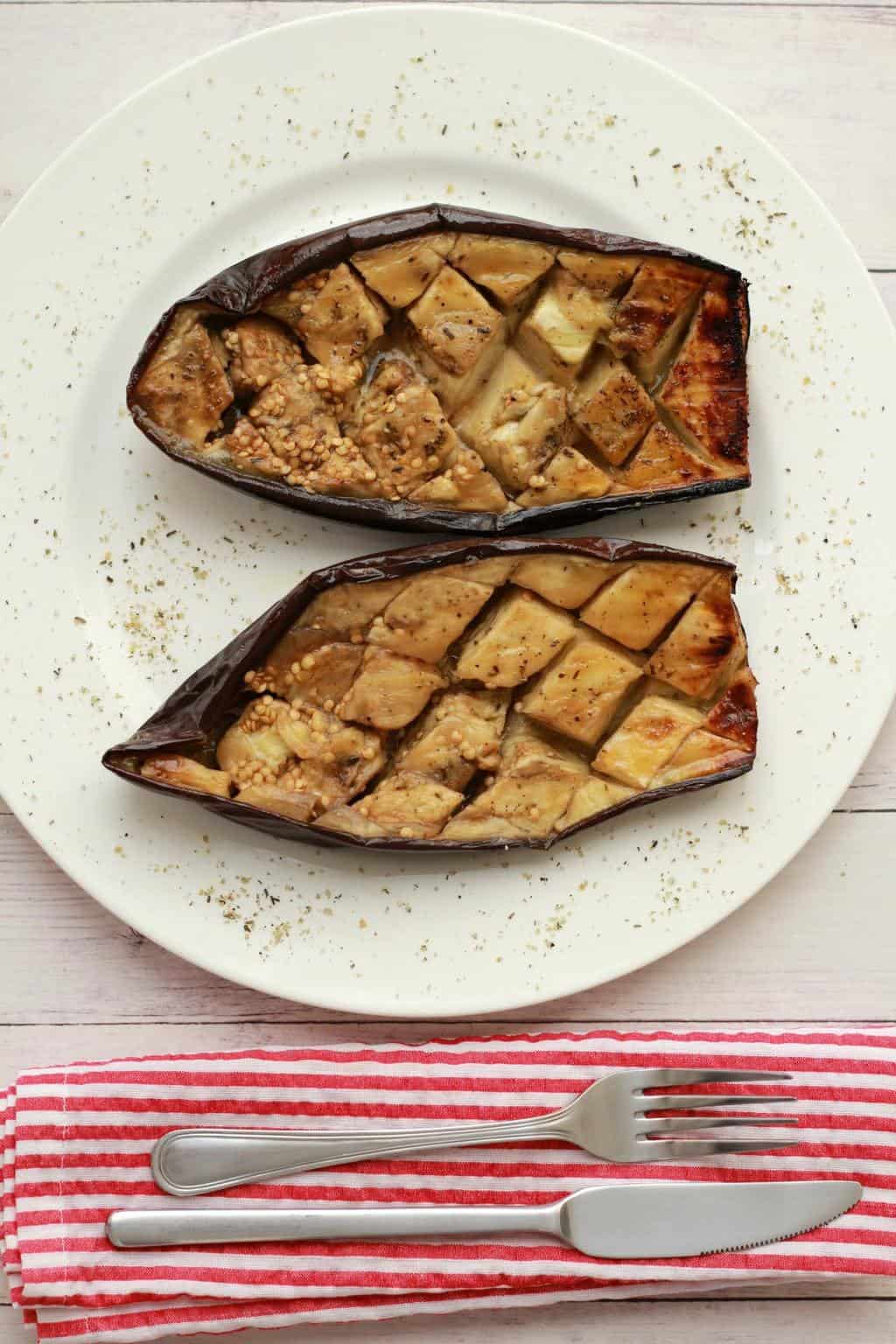 The cubes of roasted eggplant are perfectly roasted and ready to be grabbed with a fork.

This makes an ideal appetizer or side dish.

Just a word of warning about eggplants though. Sometimes even putting salt on and letting them sit for 30 minutes doesn’t draw out all the bitterness. The trick is in getting really fresh good eggplant to start off with. Older, less fresh eggplant tend to be more bitter.

The very large eggplant are also more likely to be bitter than smaller ones.

A little bitterness is no train smash though! It’s usually still delicious, because the other flavors (from the saltiness and dried rosemary), counteract any remaining bitterness that they might have.

The ones you see pictured before you were simply delicious, perfectly roasted with the perfect blend of flavors from the eggplant, olive oil, salt and rosemary – not a hint of any bitterness (and they were very large eggplants too). 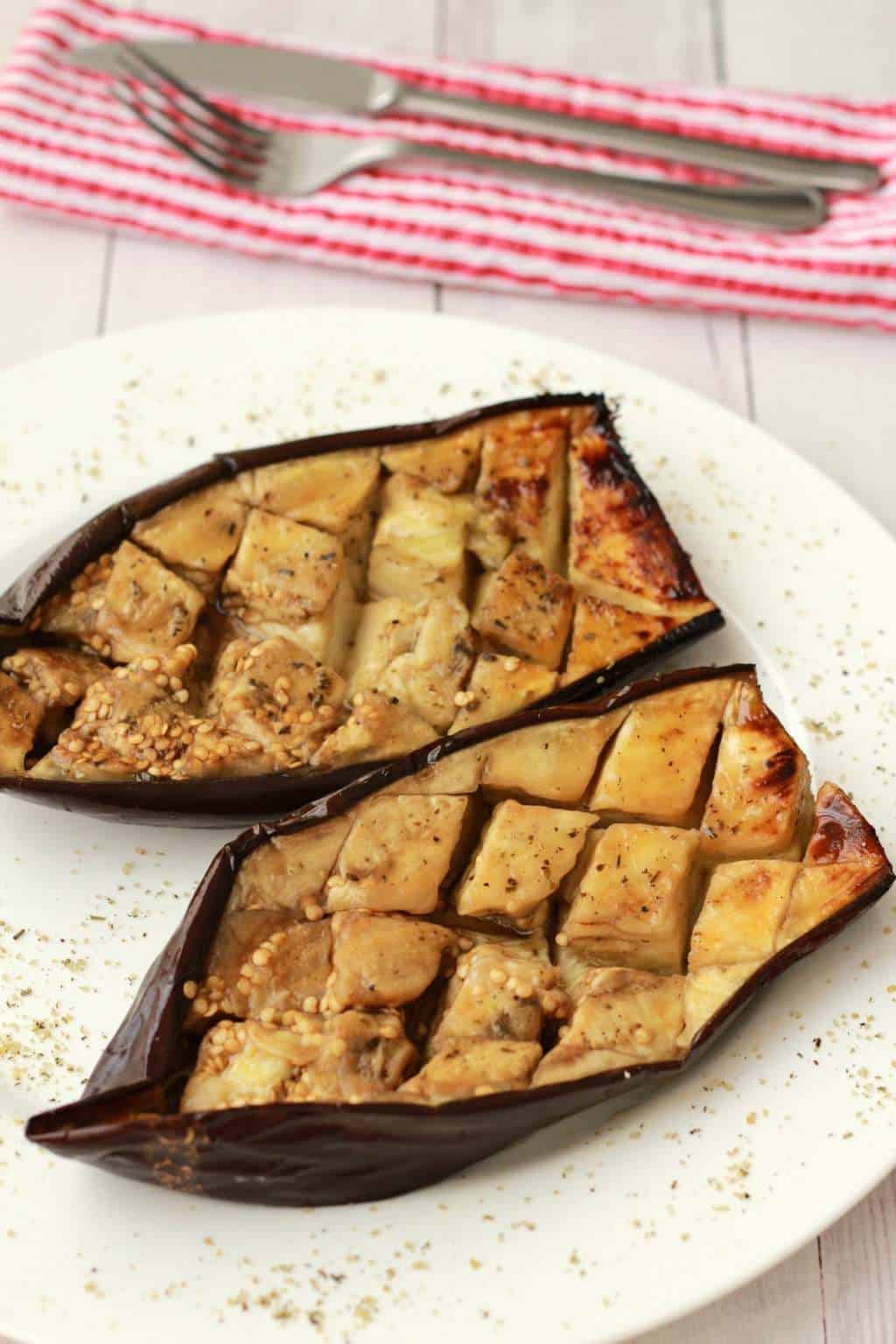 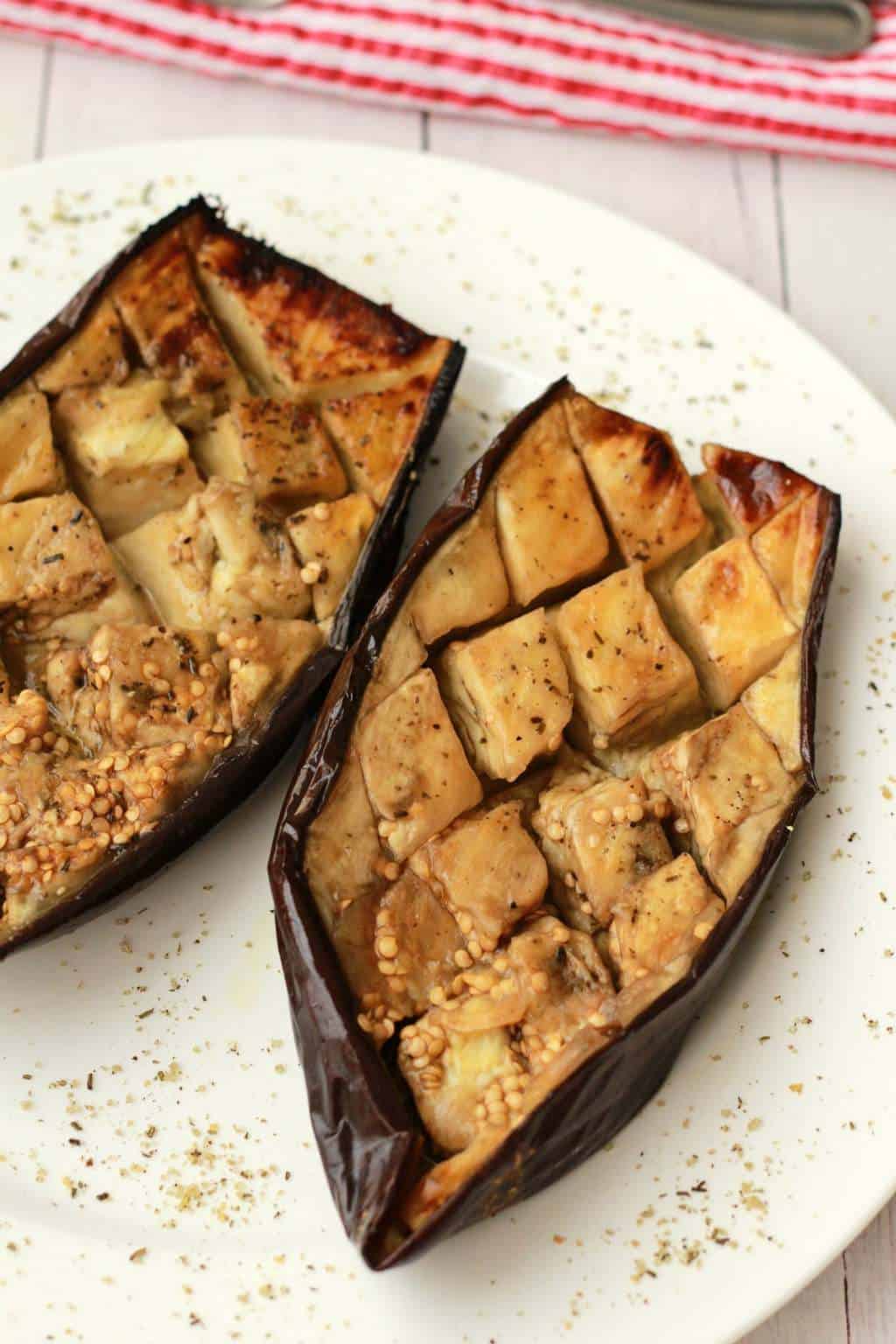 I hope you’ll enjoy these delicious roasted eggplant appetizers! They are:

They take a while to cook, but it’s completely worth it! 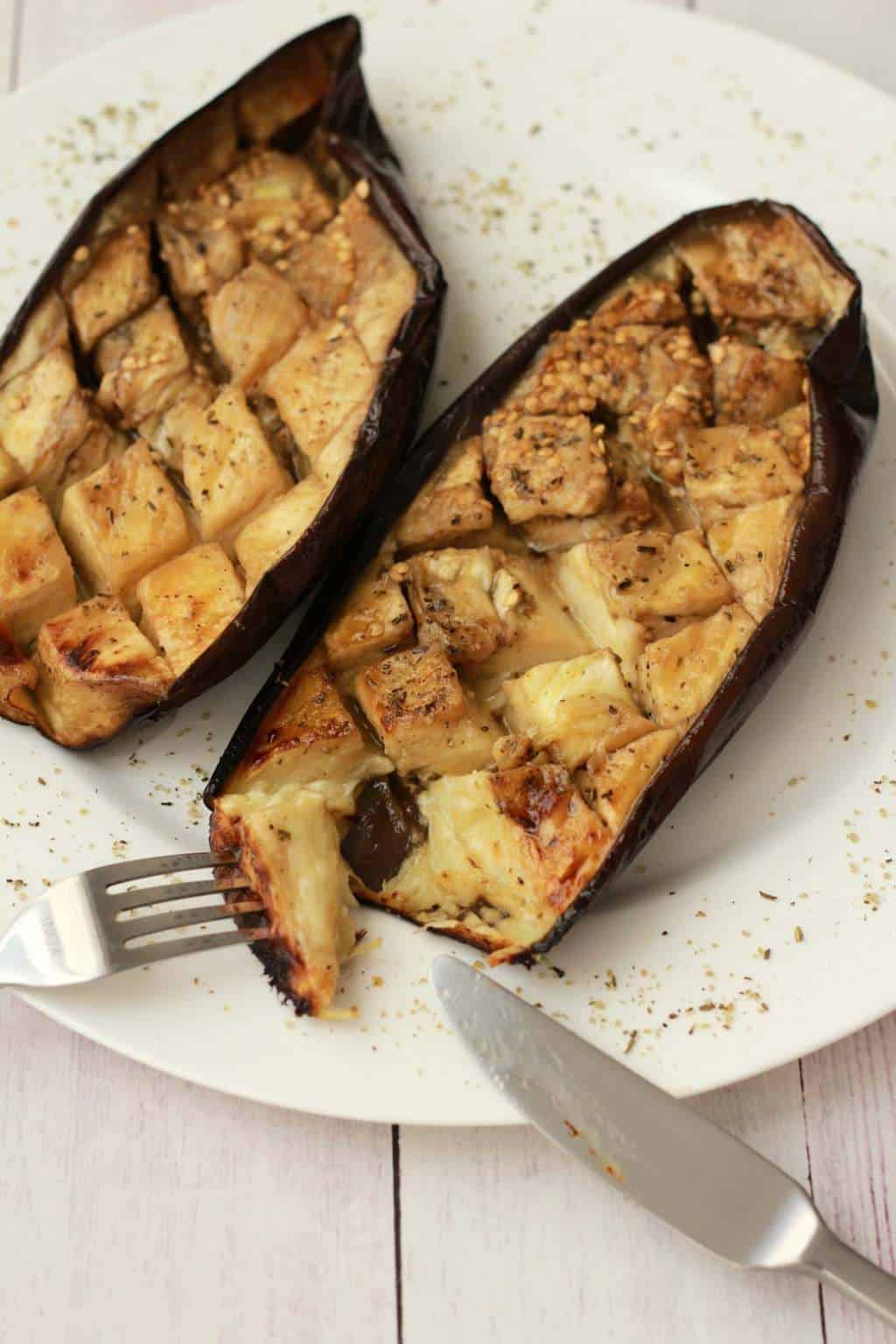 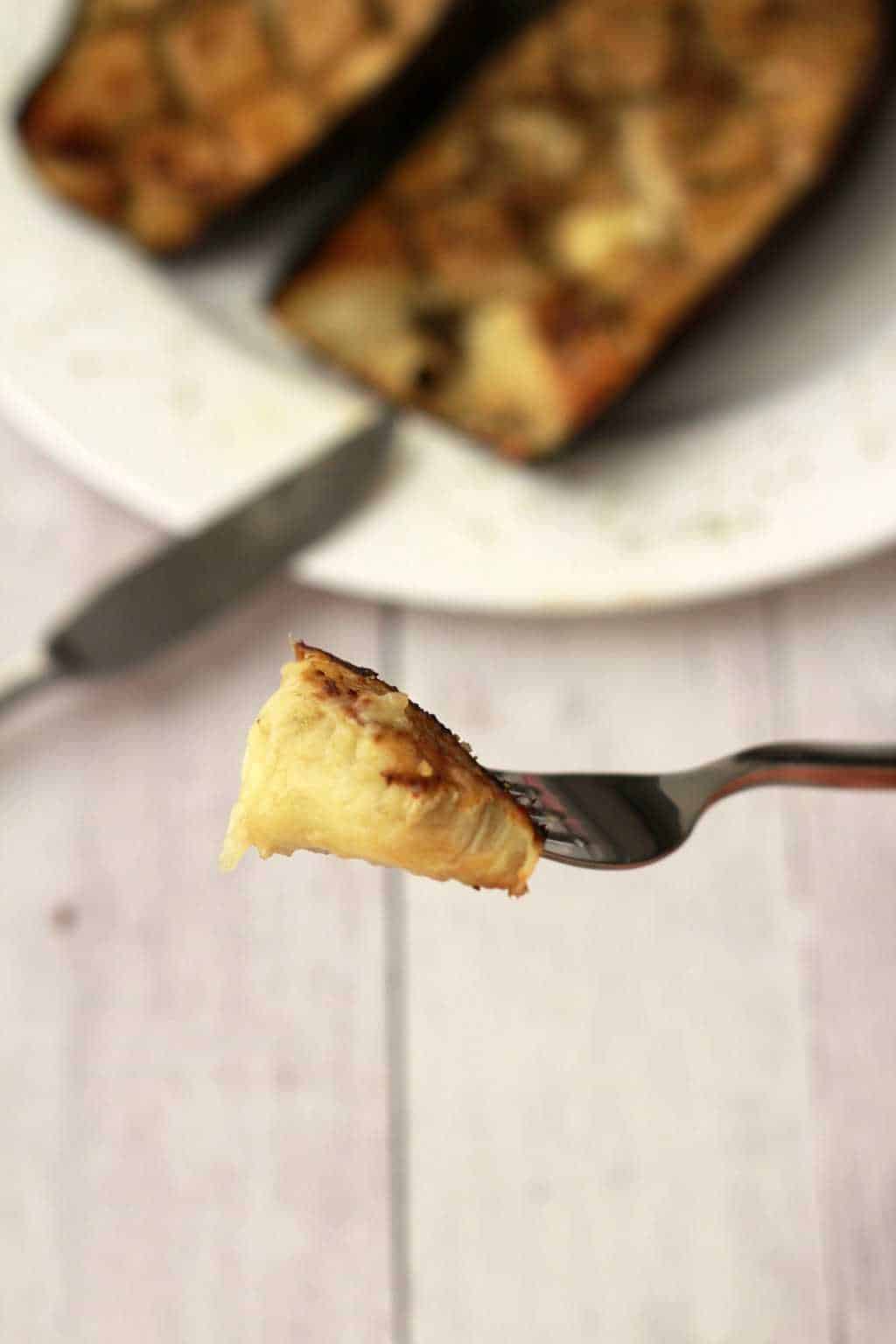 Let me know what you think of this rosemary and olive oil roasted eggplant recipe in the comments below.

If you’ve made this recipe, let me know how it turned out for you!

And if you take any pics, tag them #lovingitvegan on instagram, I’d love to see them! 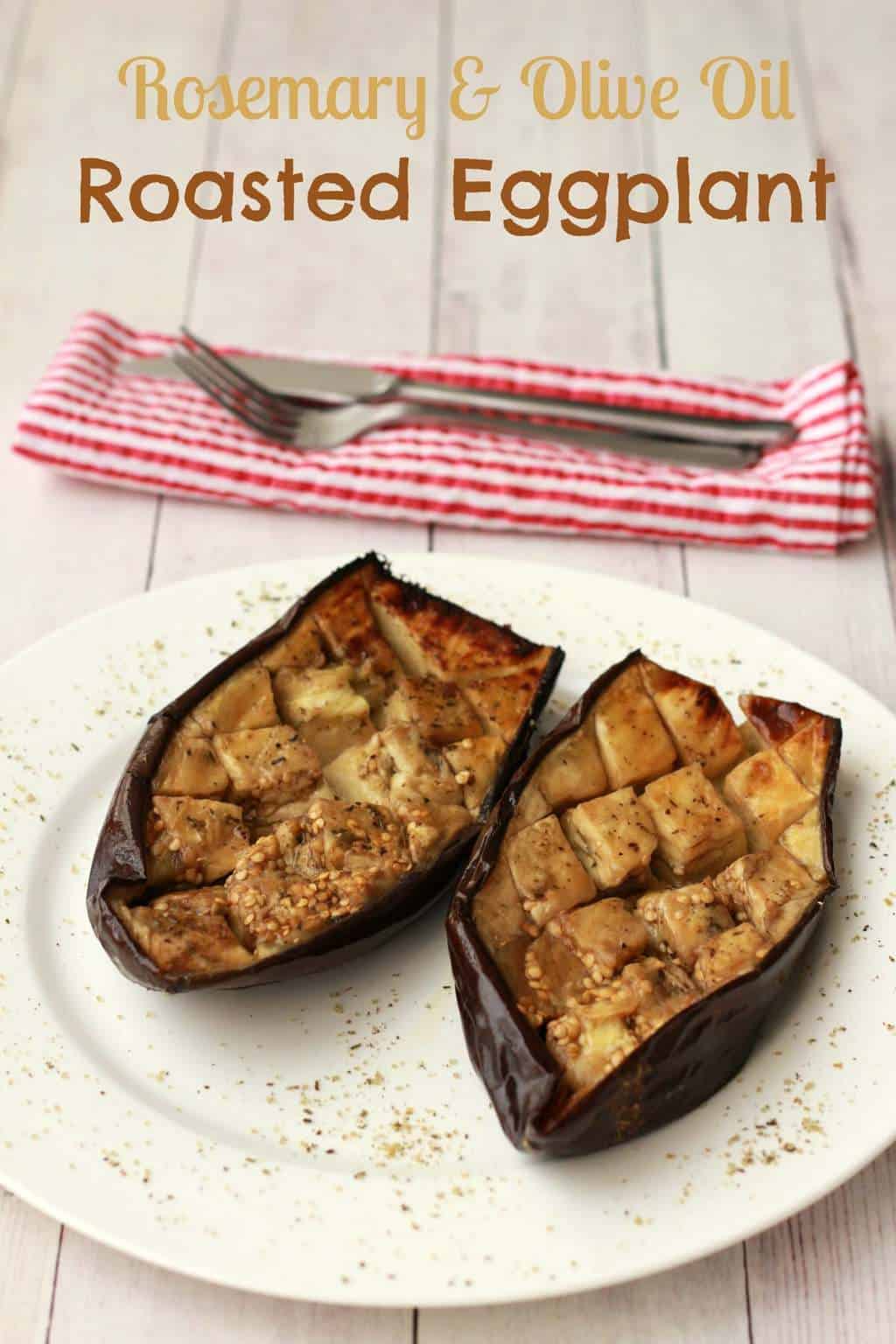 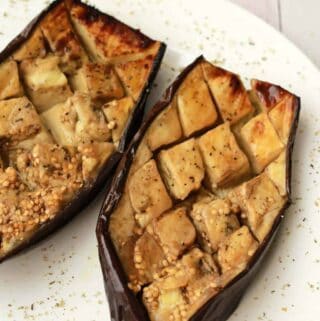