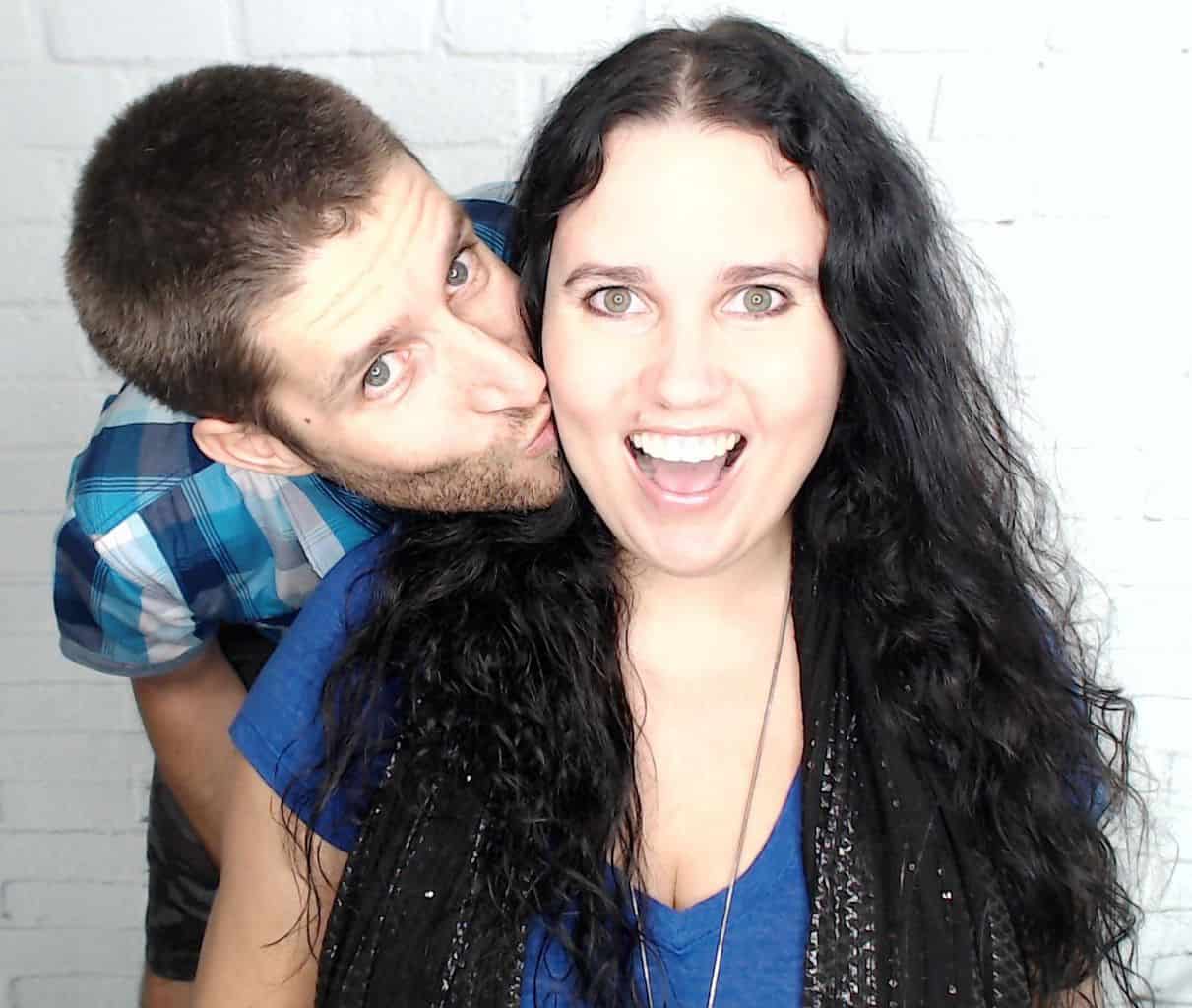 Hi there, great to meet you! I’m Alison and I’m the voice and cook behind Loving It Vegan.

My husband Jaye does the photos and the videos.

We’re born and bred South Africans but have lived all over the world.

We both do a bit of recipe creating, with Jaye more recently taking on a little more of that side of things – always the savory things, the baking and sweet side of things is all mine!

His vegan bolognese sauce is such a hit that variations of it have gone in multiple recipes now like our vegan lasagna recipe, our vegan Sloppy Joe’s and our vegan moussaka!

Loving It Vegan began in 2015 and has grown to be a popular vegan recipe blog with our recipes viewed by millions of people worldwide each month.

Our love for vegetarian and vegan food goes back a long way. I first went vegetarian in 1999.

When Jaye and I met in 2004, (and married in 2007) we went on a food and life adventure together. Before I met Jaye I was quite boring and limited when it came to food. Jaye had a very adventurous palate which very quickly rubbed off on me.

People were always saying to us that we should open a restaurant. But as people who had done a bit of work in hospitality in our 20’s, we were like no way! Way too much hard work!

Nonetheless it seemed like the most important piece of information people seemed to want from us most of the time was: what was that recipe for cashew cheese dip that you made for that party? Or please tell me how to make that butternut squash soup with the coconut cream or how on earth did you make those vegan chocolate cookies?

So…even though being recipe creators for a food blog isn’t something we always wanted to be when we grew up (it wasn’t a job that even existed when we were growing up) it was quite a natural fit for both of us.

What Loving It Vegan Is All About

We’re not snobs about ingredients, we use whatever we think is the most tasty for that particular recipe. This means we are happy to use white sugar – and yes it is vegan, most definitely in our part of the world, and if it’s not in your part of the world, then we leave it in your hands to find one that is not filtered with bone char if this is important to you, no judgement here. We’re also happy to use maple syrup or coconut sugar if we think that will be most tasty for the recipe and we don’t think it’s morally superior to white sugar in the slightest! White flour is also totally good with us.

We don’t believe that there is any one ‘perfect’ way of eating. How you eat is your business and for you to decide with the right professional guidance where appropriate. We don’t have any dietary recommendations for you and don’t think that stuff has any place on a food blog – unless it’s run by registered dietitians and we most definitely are not.

Every kind of eater is welcome and you won’t find judgy attitudes here.

All the recipes you’ll find here are vegan. I think you can gather that from the name! So I don’t think I need to say too much more about that!

Some recipes are gluten-free too, but by no means all of them. We are not a gluten-free blog. I like to experiment and my mom is sensitive to gluten so I definitely sprinkle in some gluten-free stuff here and there.

We try to keep things simple, but we go where the recipe takes us! So if it’s a ready in 30 minutes kind of deal that’s awesome, but if it’s a more complicated affair that might take a few hours but be totally worth it we’ll happily do that one too.

We decide what recipes to make based on what people ask for and what people are searching for. The recipes you find here are not a food diary and don’t necessarily represent what we’re eating. So if you see a lot of cakes, it’s not like we’re just eating cake all day. This site is about the recipes, not about us, the focus is on the food.

We test the ever-loving-heck out of every recipe. This is not just pretty pictures and a recipe that doesn’t turn out, we test every recipe rigorously before it goes up on the blog. 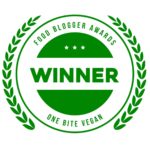 We were extremely honoured to win in two categories in the 2020 Vegan Food Blogger Awards and this was for the second year in a row!

We’re especially honored because the awards are voted for by readers. Thank you so much to everyone that voted!

We won in the categories of ‘Best Vegan Baking and Sweets’ and ‘Best Vegan Food Videos’ two years in a row.

Loving It Vegan Featured In!

We have also had our recipes featured and our blog mentioned in lots of amazing places online. Here are a few of them. 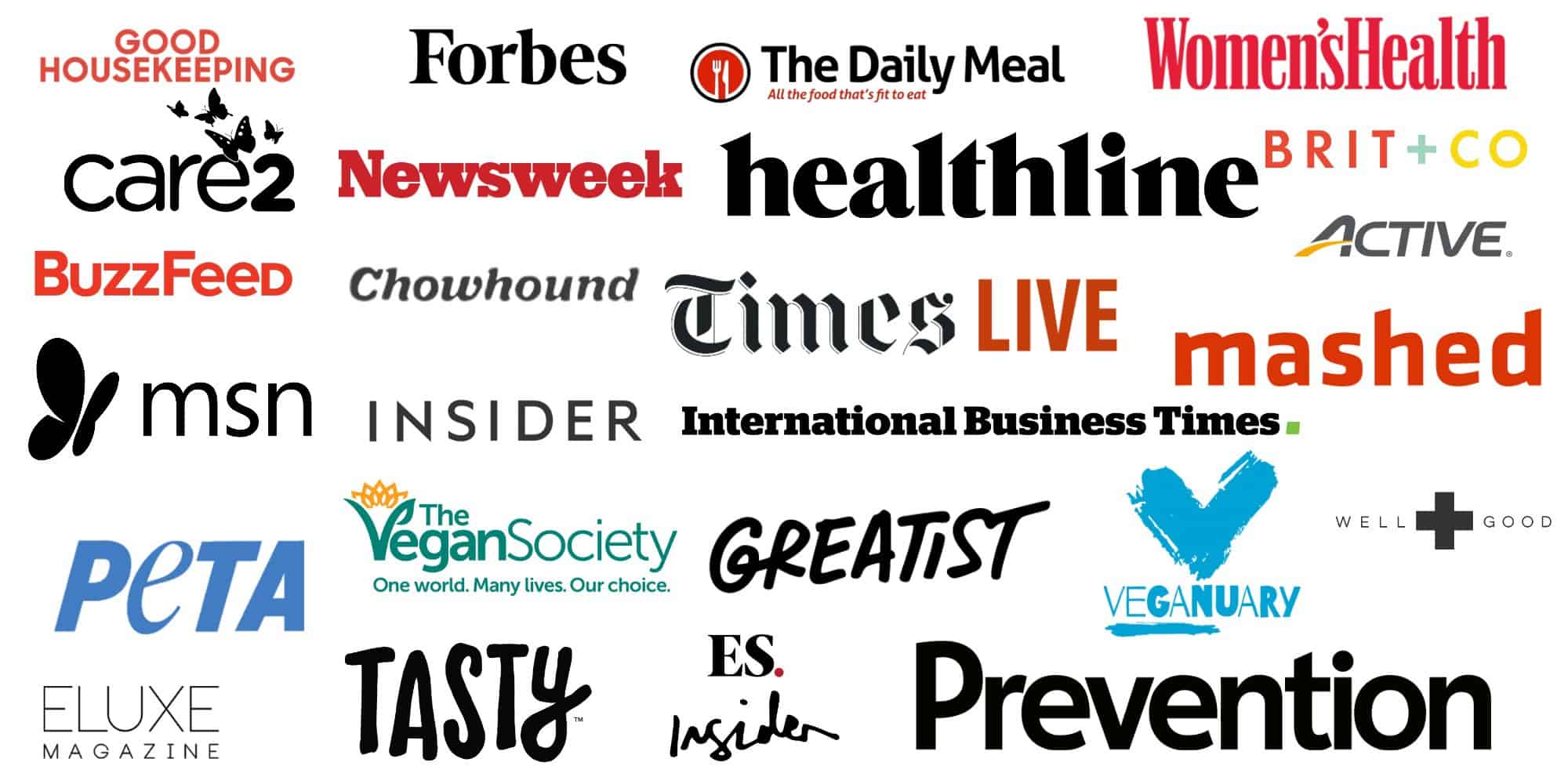 Random Facts About Us

We’re both INFJ’s…and don’t really believe in that stuff either. ????

We have two fur babies that we adore (update: now it’s 4!). More about them below, they get their own section! We don’t have any human children and no plans to make any. We are happy pet parents (and proud Aunt and Uncle to my sisters gorgeous two) and that’s enough for us.

I’m a singer/songwriter and Jaye is an amazing guitarist/songwriter and we released an album together called ‘Love’s A Cure’. Doing more music stuff is something that we’re always planning on doing. But right now it’s on the back burner a little bit.

We LOVE reading! I read like crazy and then keep adding to the ‘to read’ pile of books on Jaye’s bedside table until it gets crazy high. He reads only the best stuff because I’ve already filtered the ‘meh’ stuff out.

We love comedy and love to laugh.

I have a bachelors degree in English and History from the University of Cape Town.

Jaye studied film. Very handy since he spent years as a video director – and won several awards and created viral video campaigns featured on CNN. So now he can use all that knowledge and experience to make amazing recipe videos! I mean! Can it be more perfect?

Jaye is a surfer and skateboarder and gives me heart failure doing it. I do wish for safer hobbies!

We both love stand up paddleboarding (SUP) and are really pretty good at it! 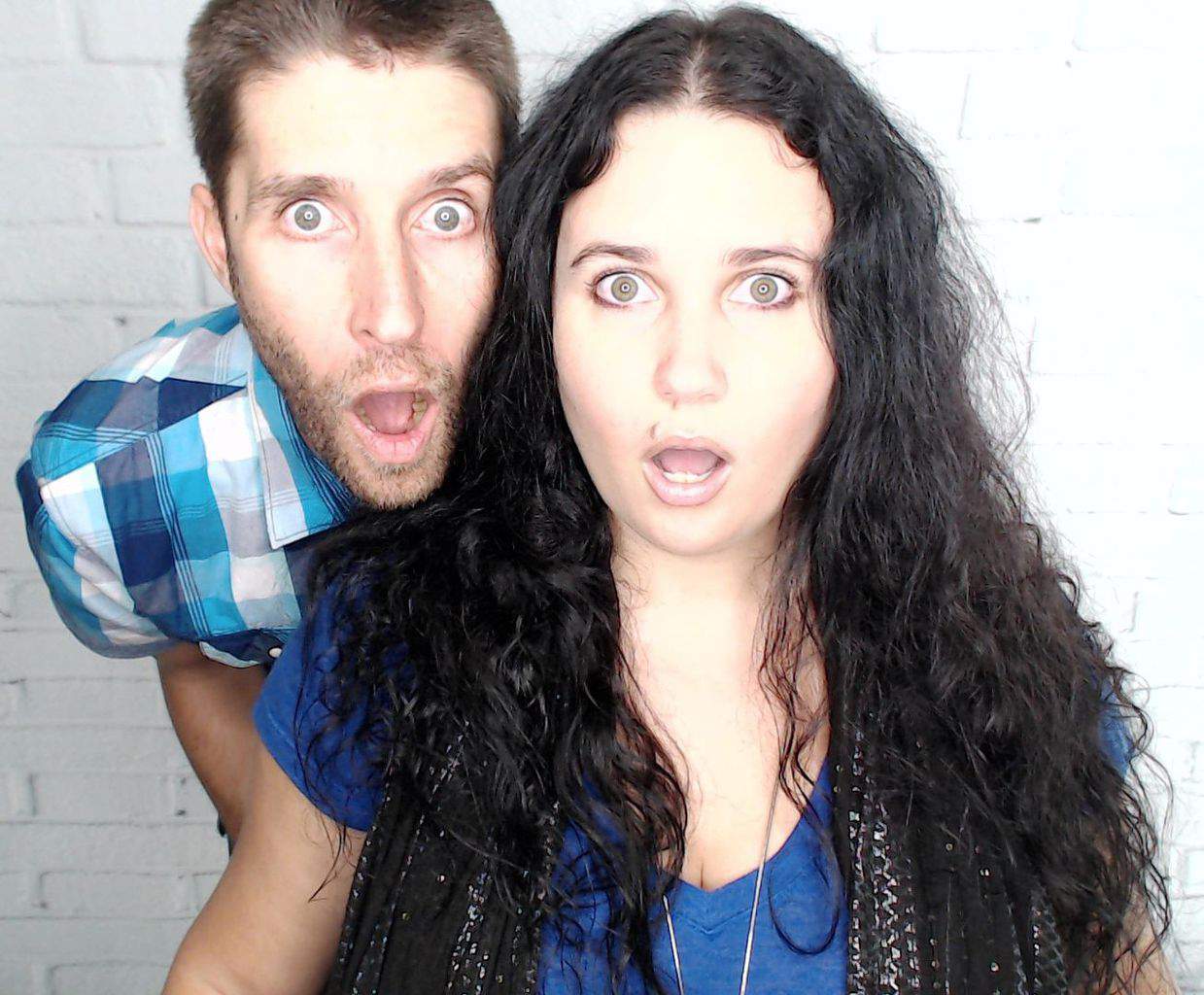 One night in 2011 when Alison and Jaye were living in Dubai, Alison walked past a bush, right outside their apartment and heard a little kittie voice calling to her. She sat down on the wall in front of the bush. Out came a little black and white kitten from the bush and sat down next to her, a small distance away, but quite companionably.

As other passers-by came past the kitten rushed back into the bush to hide (and didn’t make a peep), but when the coast was clear again he came out and sat down near Alison again. Soon, his little sister came back from wherever she had been and joined in the companionable sitting.

Alison knew she and these two kittens were destined to be great friends. She had a chat with a security guard working nearby to find out if the kittens had a mother he had seen, and was told that they had been living in the bushes there for a month (!) all alone, and there was no mother cat that had ever been seen.

Alison took them home with her and named them Frankie and Ernie. Jaye was soon on board as well (even though he had not been super keen on pets up to that point, he was soon a convert) and the adopted fur kids have been doted on ever since!

Alison is positive that Ernie recognized her as his future mother – even though she doesn’t really believe in that stuff – why else would he have called out to her from the bushes but stay totally silent with everyone else?

On their first visit to the vet a couple of days after going to live with Alison and Jaye, it was discovered that the kittens were two months old, so they had been living rough since they were one month old. Ernie had scratches all over his belly that the vet said would’ve come about from defending himself and his sister – the poor little guy!

Ernie is such a little scaredy cat now, Alison and Jaye think it’s because he used up all his bravery in his early months of life. And neither of the cats is very interested at all in ‘outside’ – they’ve been there done that, they want the safety of home, inside the home that is.

They still run and hide if the doorbell rings, think going to the vet is ‘the great betrayal’ and have a very strong opinion about ‘stranger danger’.

They bring enormous joy to their adoptive parents and everyone who gets to know them. They love South Africa after their relocation from Dubai and are thriving in their new environment. Here’s a look at the two cuties.

This is Ernie (short for Ernest) in his favorite sleeping/hiding place, in bed, under the duvet. 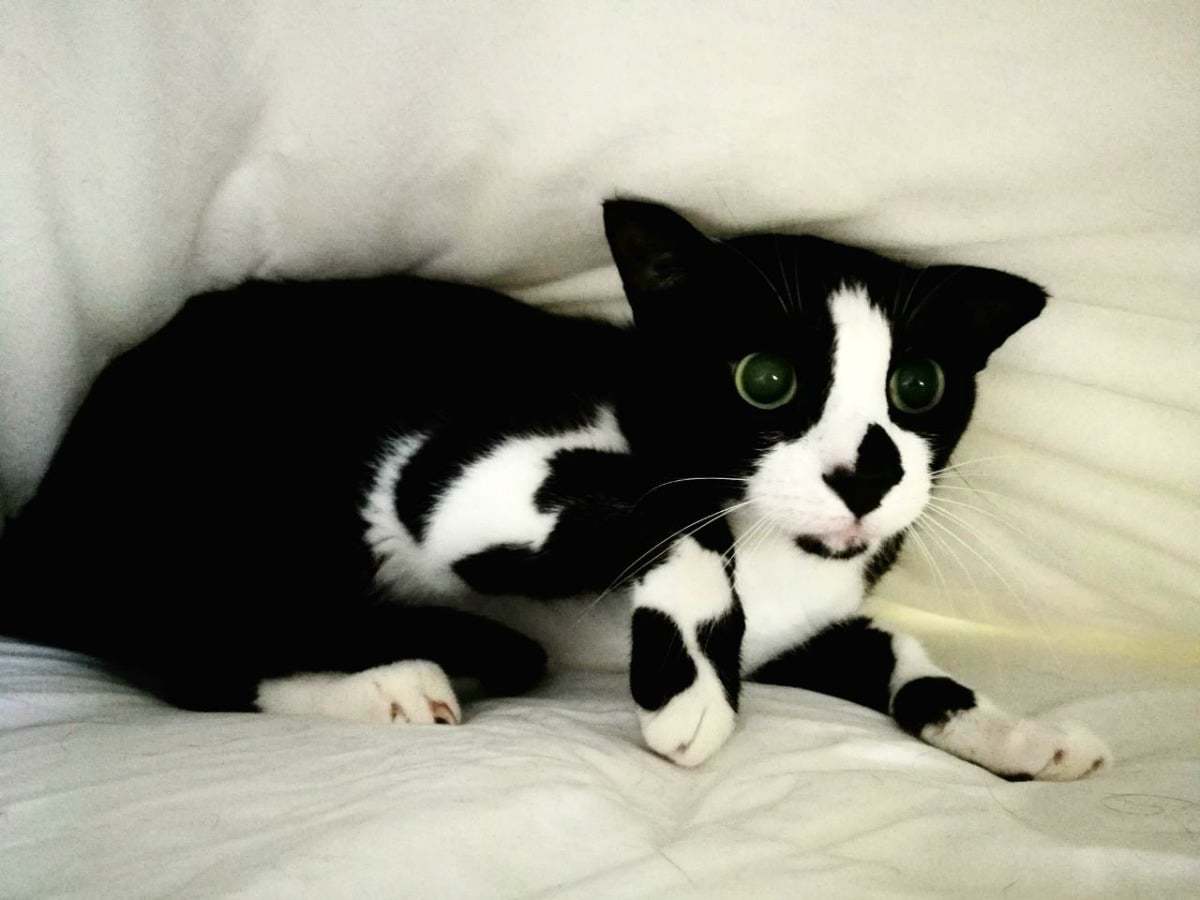 And this is Frankie – initially named ‘Frank’ because Alison didn’t know what was what! And then corrected after her first vet visit and the clarifications were made. She then became Francesca (Frankie for short). 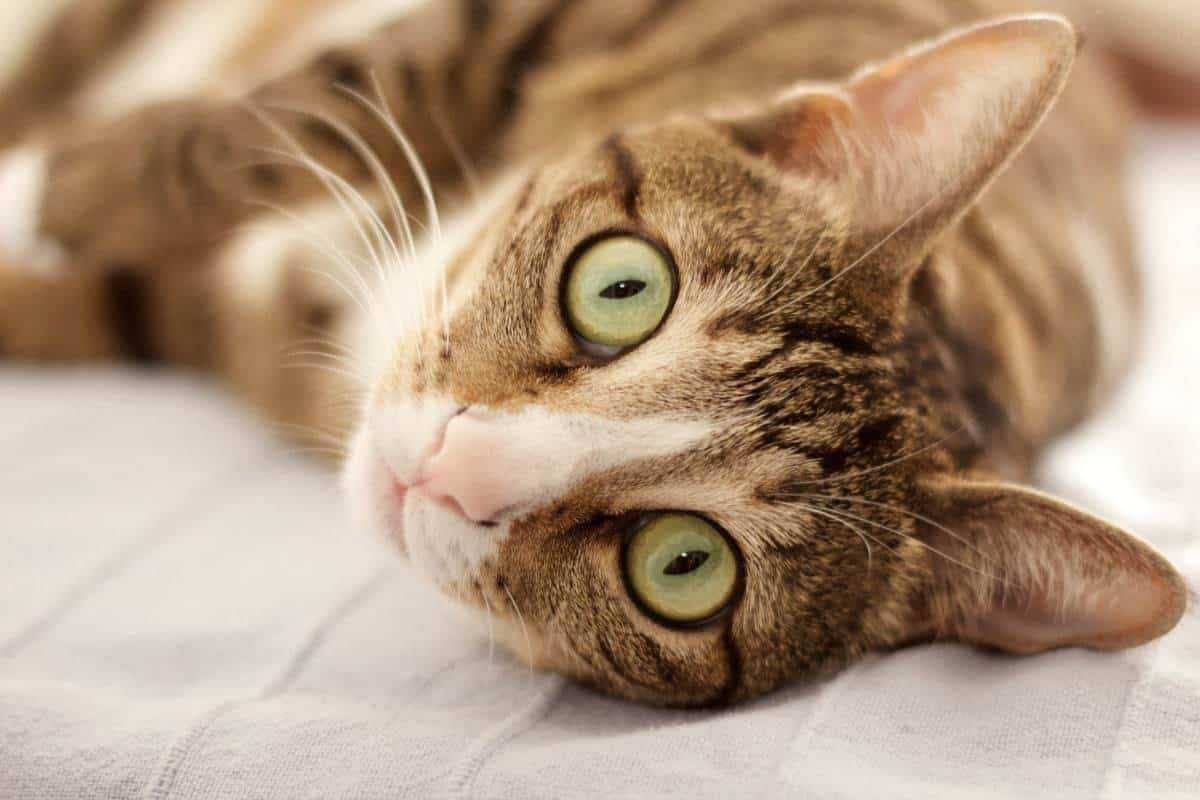 The New Kids On The Block

Alison and Jaye have recently adopted two kittens, a brother and sister, that they have named Richard and Olivia. They are absolutely adorable! They were adopted from an animal shelter in January 2020. Unfortunately big brother Ernie turns out to not be the friendliest chap to newcomers (who knew?) though big sister Frankie is a gem (again, who knew? They thought she was the cranky one!). So their house is currently run like a timeshare, the kittens and Ernie can’t be in the same place at the same time. Two cat behaviorists later and this is the best solution they have so far….

Here are the adorable two! This is shortly after they were adopted. Richard at the back, Olivia in the front. 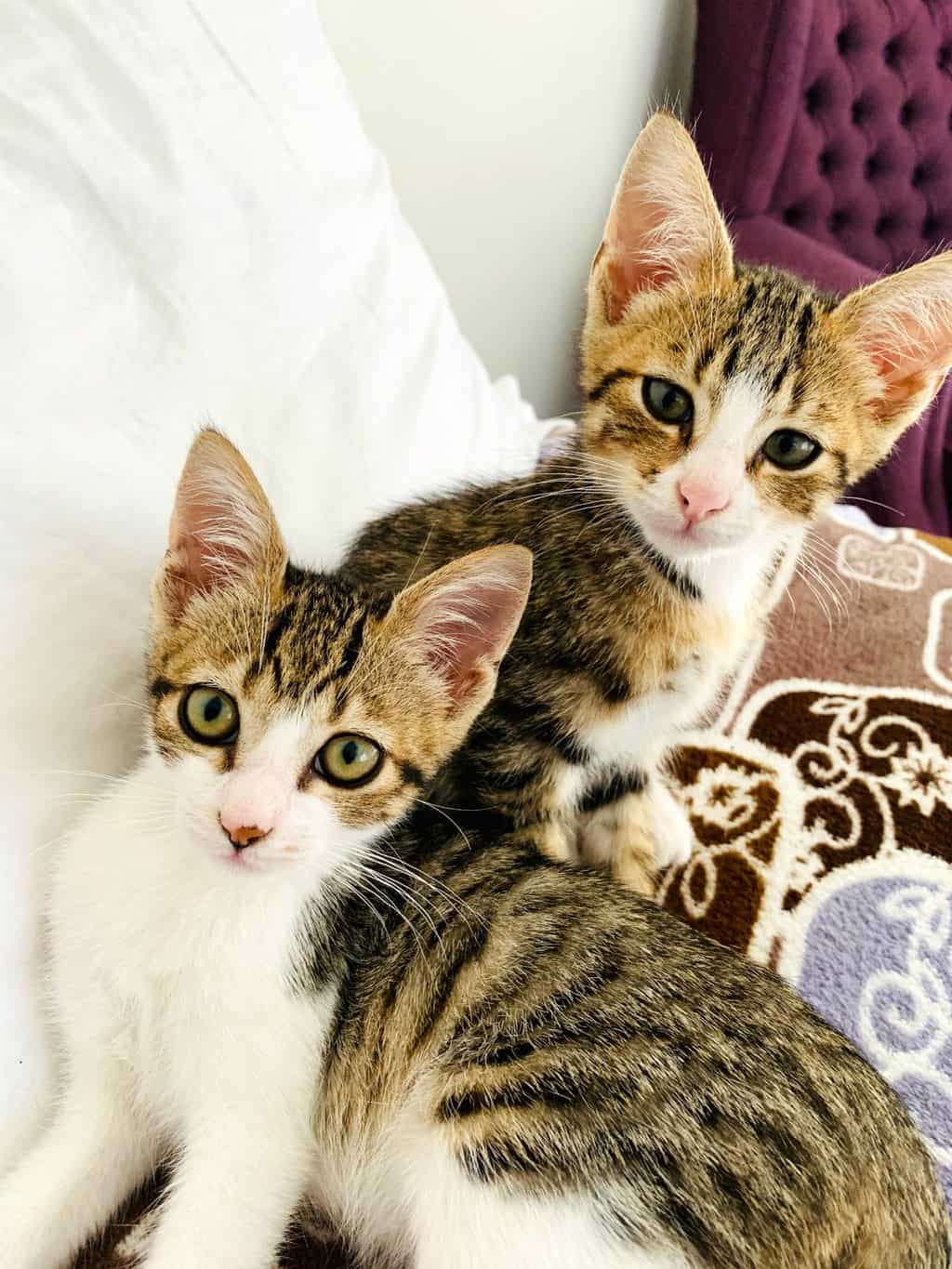 And more recently at 7 months old, Olivia on the left, Richard on the right. 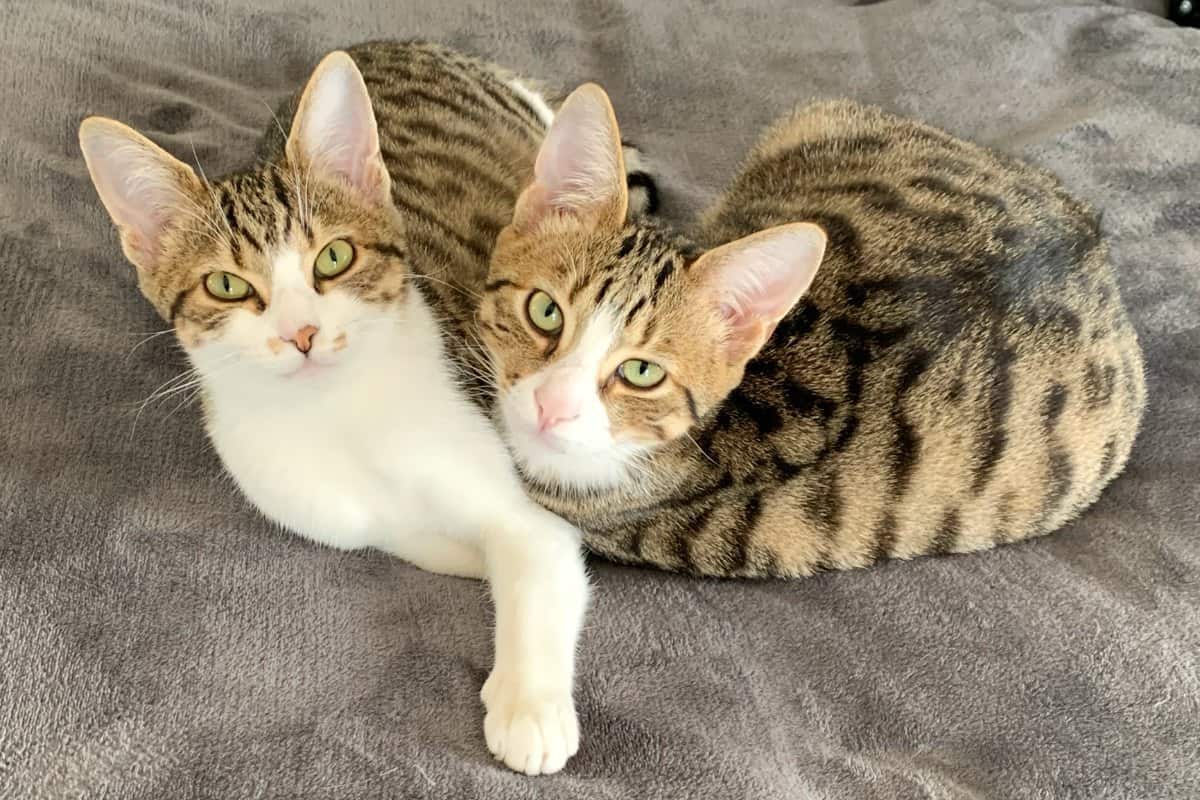