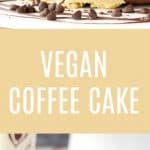 Insanely delicious vegan coffee cake with kahlua frosting. This isn’t just a cake to eat with your coffee, this is fabulously decadent coffee flavored cake! 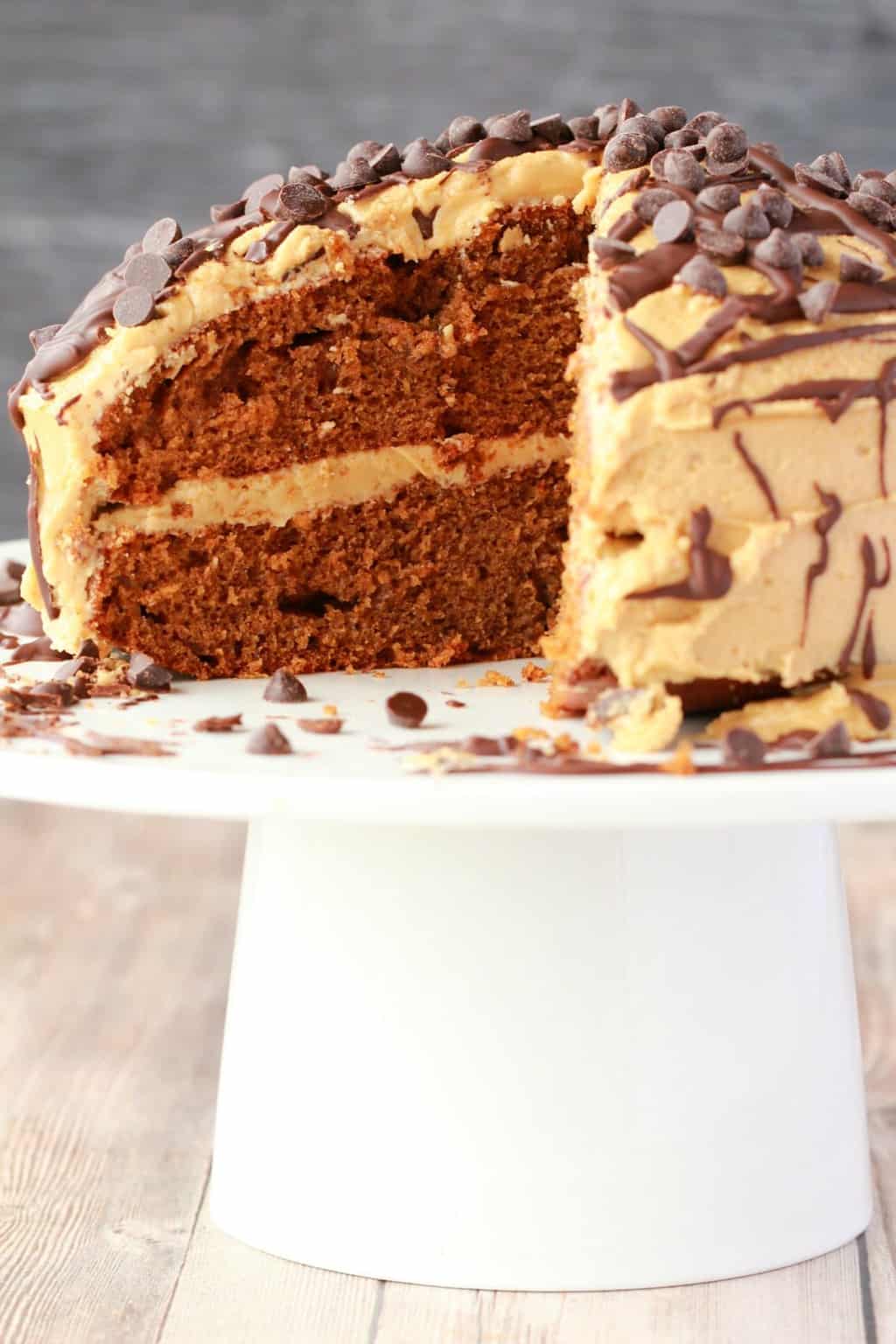 I just found out a super surprising (to me anyway!) fact about coffee cake. Apparently, folks in America often call something a coffee cake when it’s meant to be eaten along with coffee. It doesn’t necessarily have any coffee in it.

Whereas in the UK (and South Africa, where I’m from), a coffee cake is a cake flavored with coffee.

So when I made my vegan coffee cupcakes I had no idea about this little factoid!

I found it out when I went hunting for coffee cake recipes to look for inspiration for this recipe and found a whole heap of cakes called ‘coffee cakes’ that had absolutely no coffee in them. I was totally befuddled until wikipedia helped me out!

So this vegan coffee cake, has some coffee in it. Just in case you were thinking it’s one of those ‘eat with my coffee’ kind of cakes not flavored with coffee at all.

This isn’t one of those. But you definitely CAN eat this with your coffee and I think the coffee flavor in this is just fabulous! 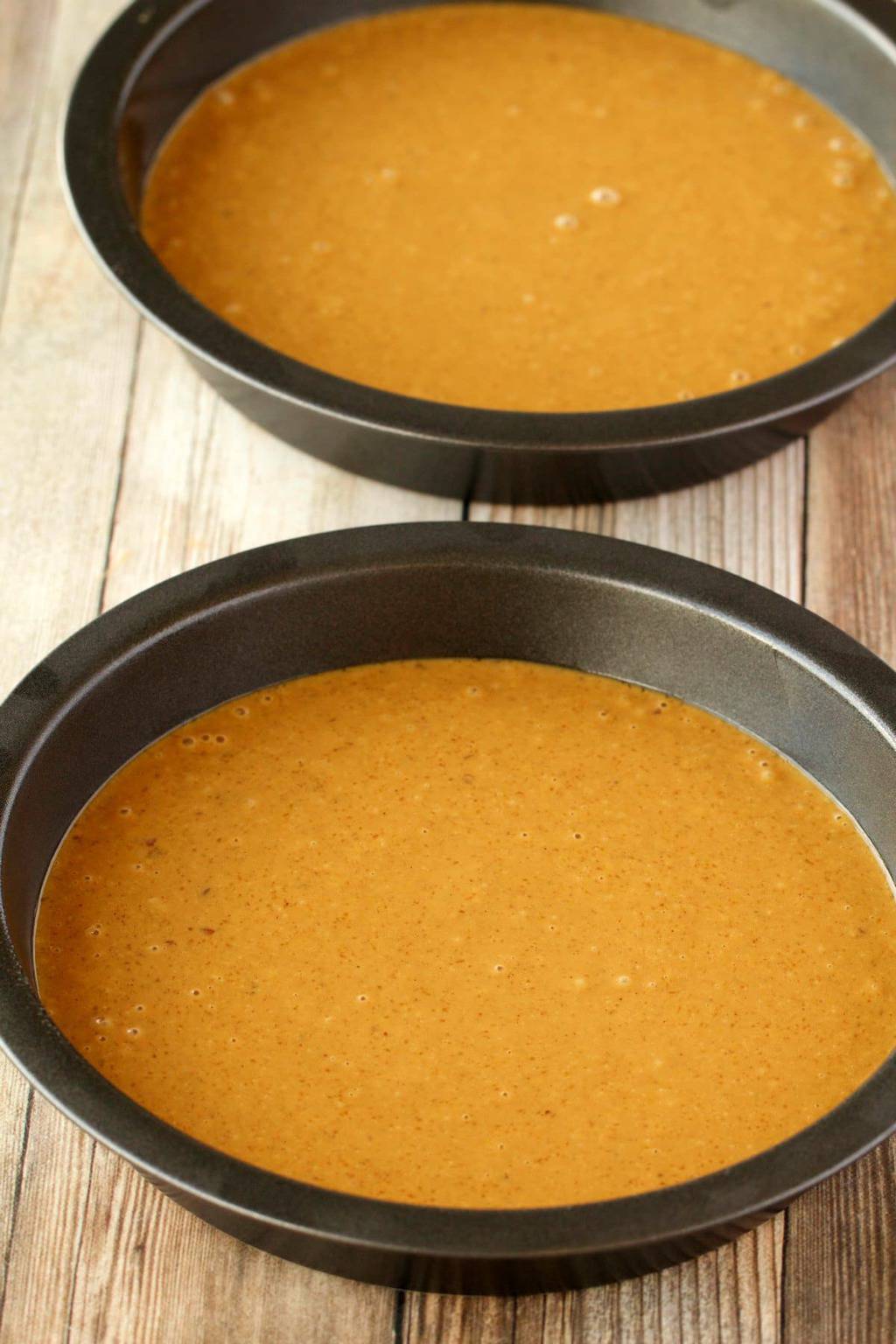 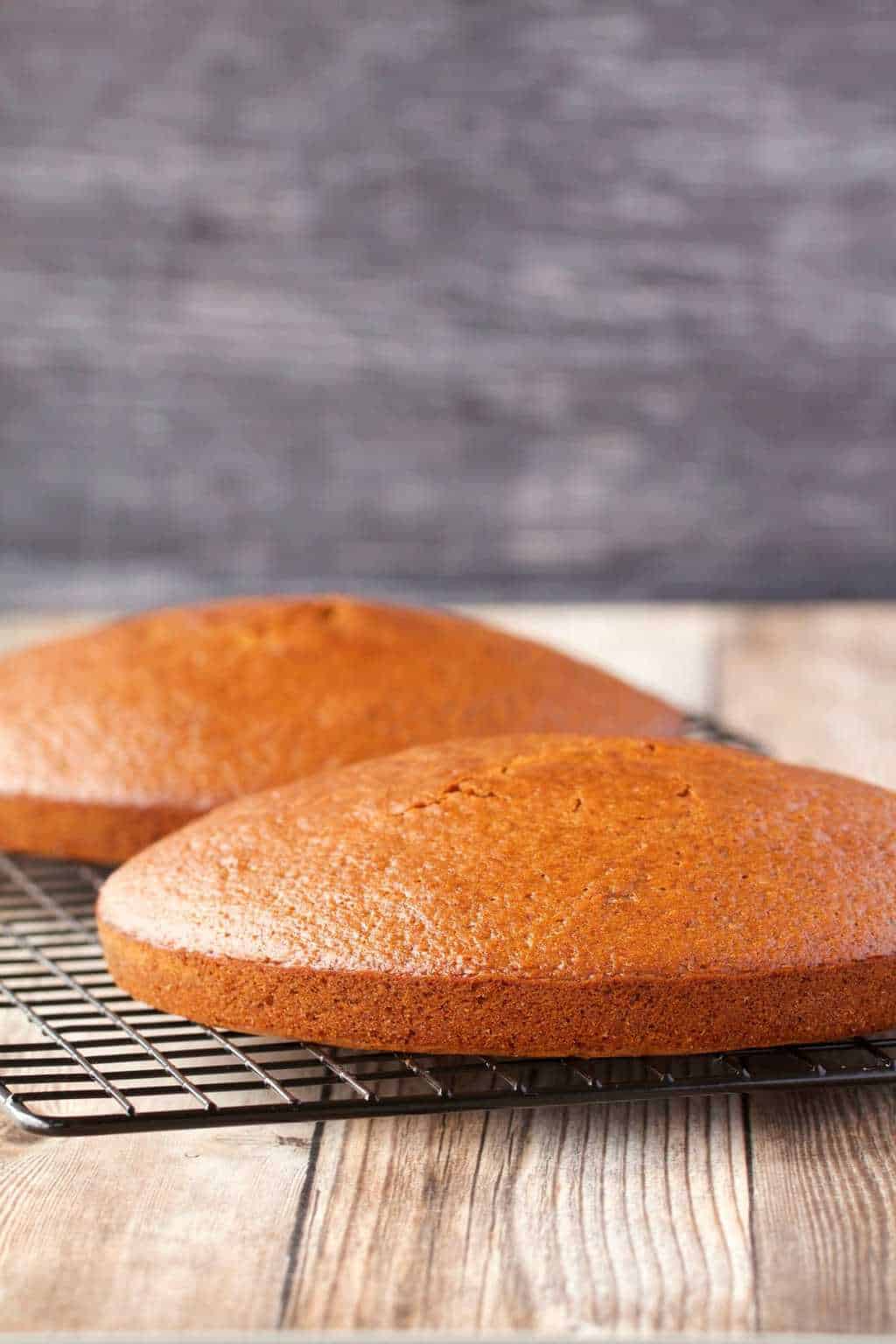 I was vaguely considering going the route of using filter coffee in this, but decided against it because I’ve tried that before in a cake and the flavor doesn’t come through strongly enough.

So this coffee cake has 3 tablespoons of instant coffee powder, and the flavor is there, it’s sooo there.

And this way you don’t even have to put on a pot of coffee, you just have to spoon it in, it’s too easy. 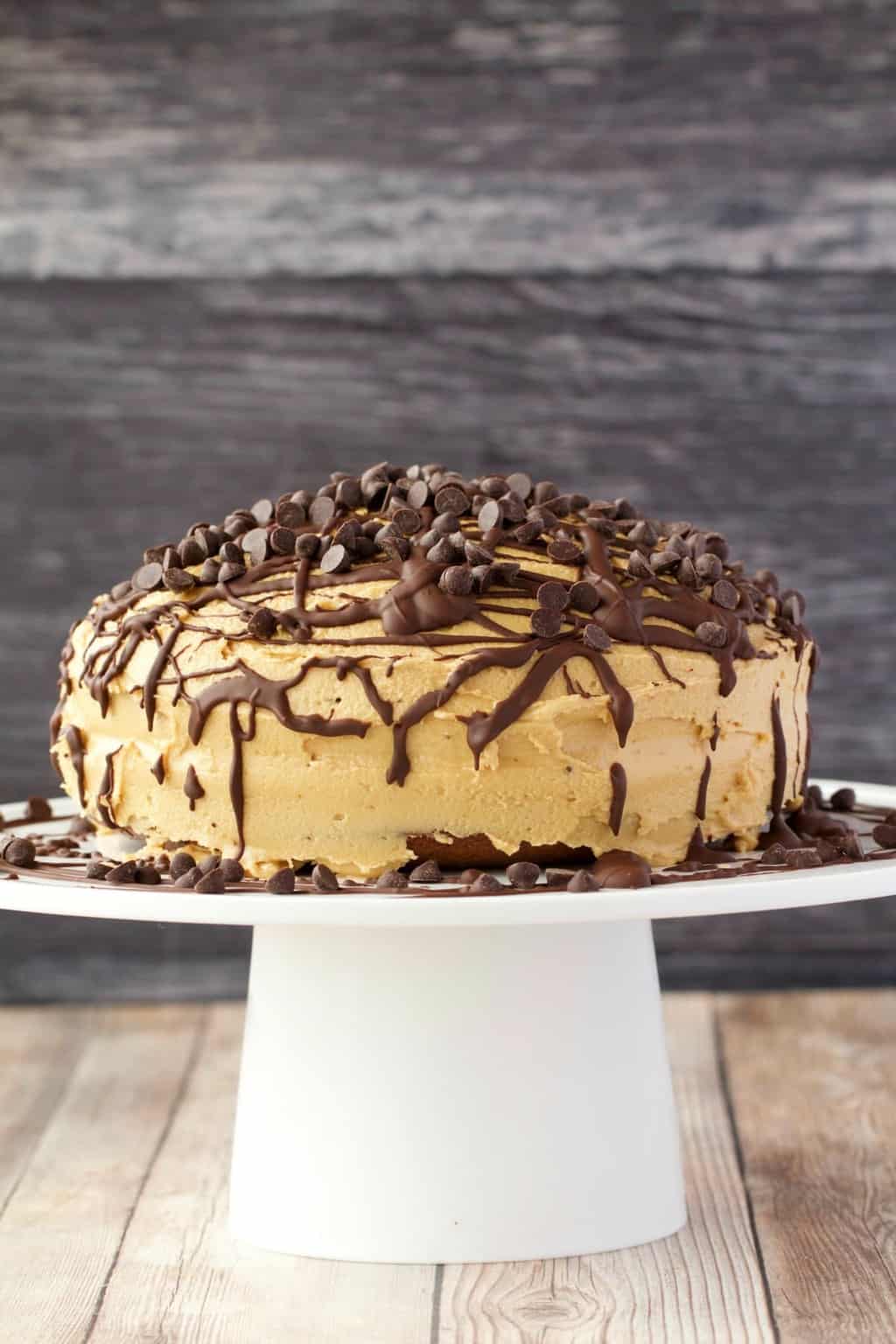 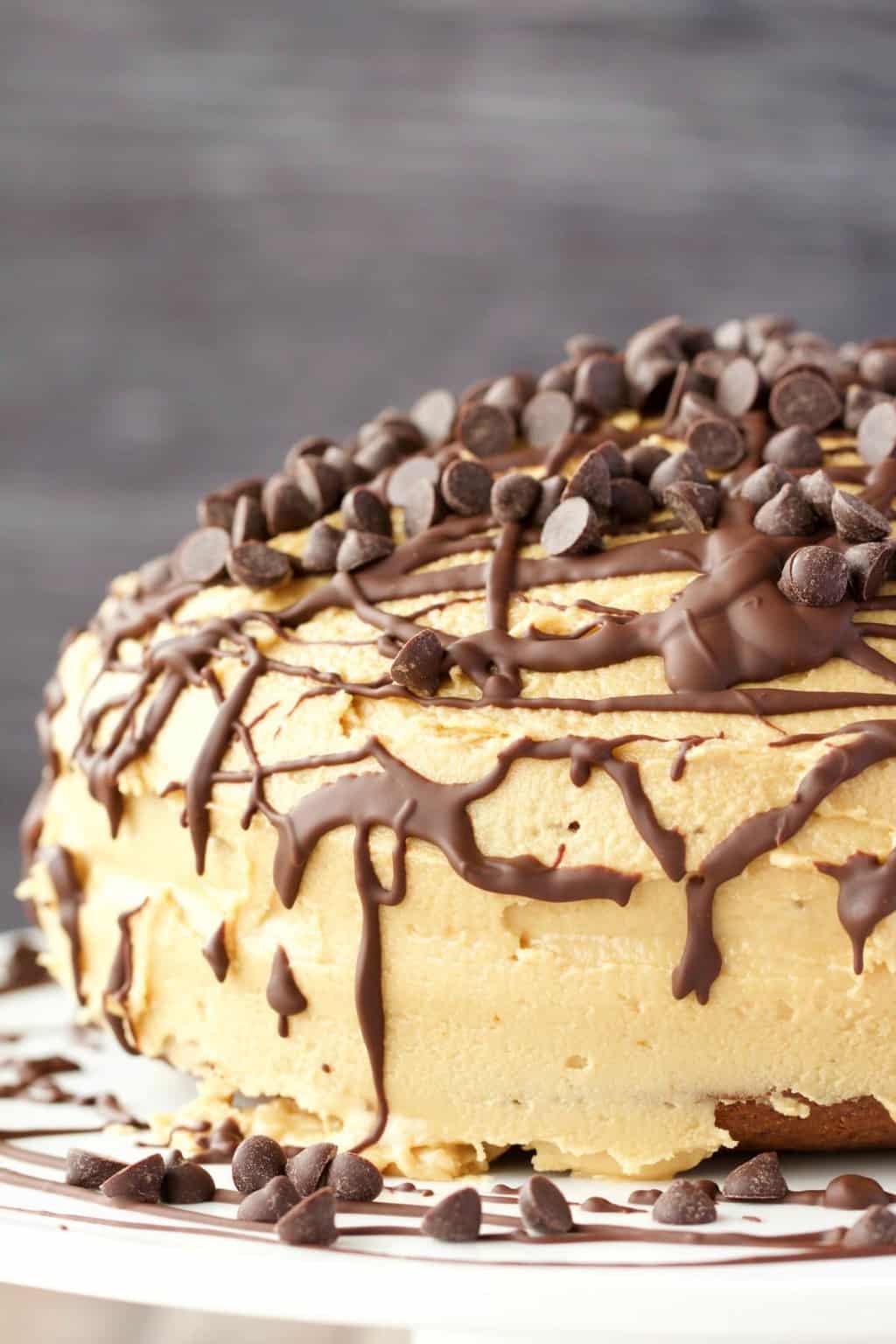 And then how about that frosting! I first tried a kahlua frosting when I was trying to make a kahlua cake. The frosting was a huge success, the cake was not.

I simply could not get that kahlua cake to hold together, it just broke up. I usually don’t have any problems with my cakes binding, so I had to conclude it was the kahlua that was causing the issue.

The only thing I could find out about it online was that adding alcohol to cakes can change their texture. I couldn’t find a single bit of info about how to solve that issue, as clearly the way it was changing my cakes texture was to make it crumble!

Anyway we had boozy cake crumble which was very tasty, but since I couldn’t figure that one out, that recipe won’t be finding it’s way to the blog, not unless I can find a way to fix it that is (any insights, I’m all ears)!

But the frosting – well it was such a winner – I knew I had to use it for another cake. So here it is!

This kahlua frosting is a perfect pairing with this vegan coffee cake.

And then to decorate, melted chocolate drizzled everywhere and chocolate chips sprinkled on top of that!

The look is decadent and the taste is magnificent!

Serve it with a cup of coffee (or tea) and enjoy the deliciousness of this very coffee flavored vegan cake! 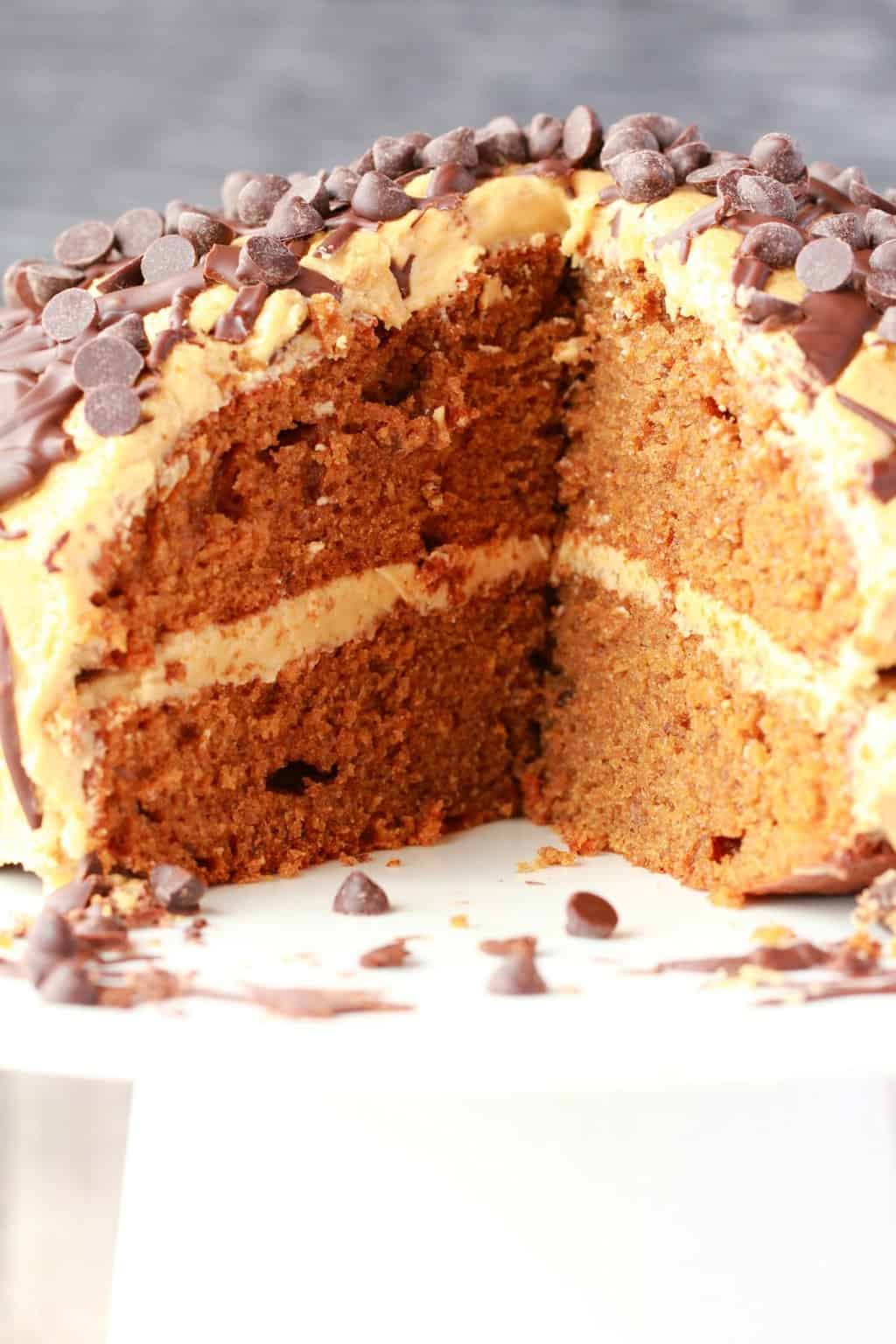 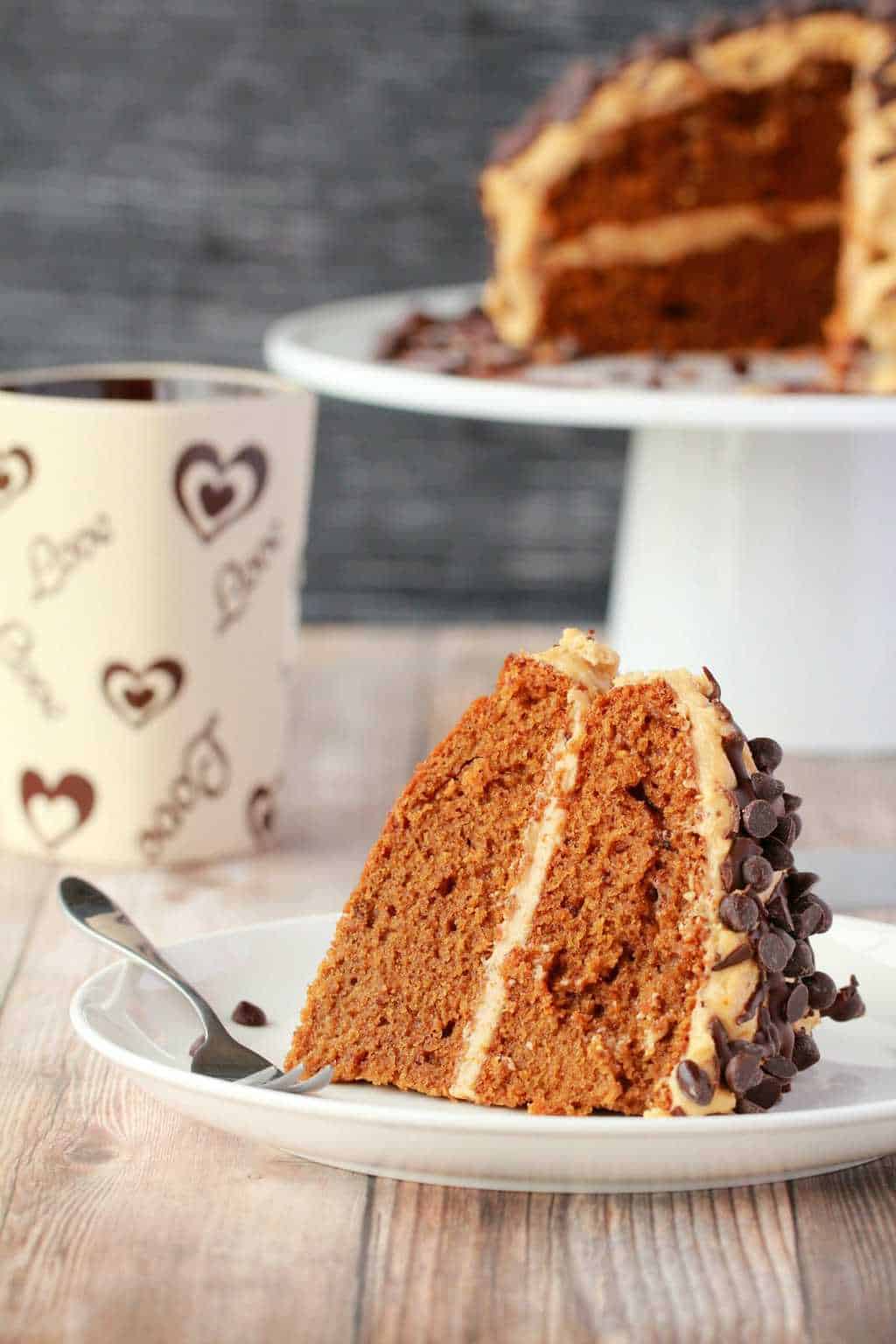 You will love this vegan coffee cake, with kahlua frosting – let’s not forget that super nb part! It is: 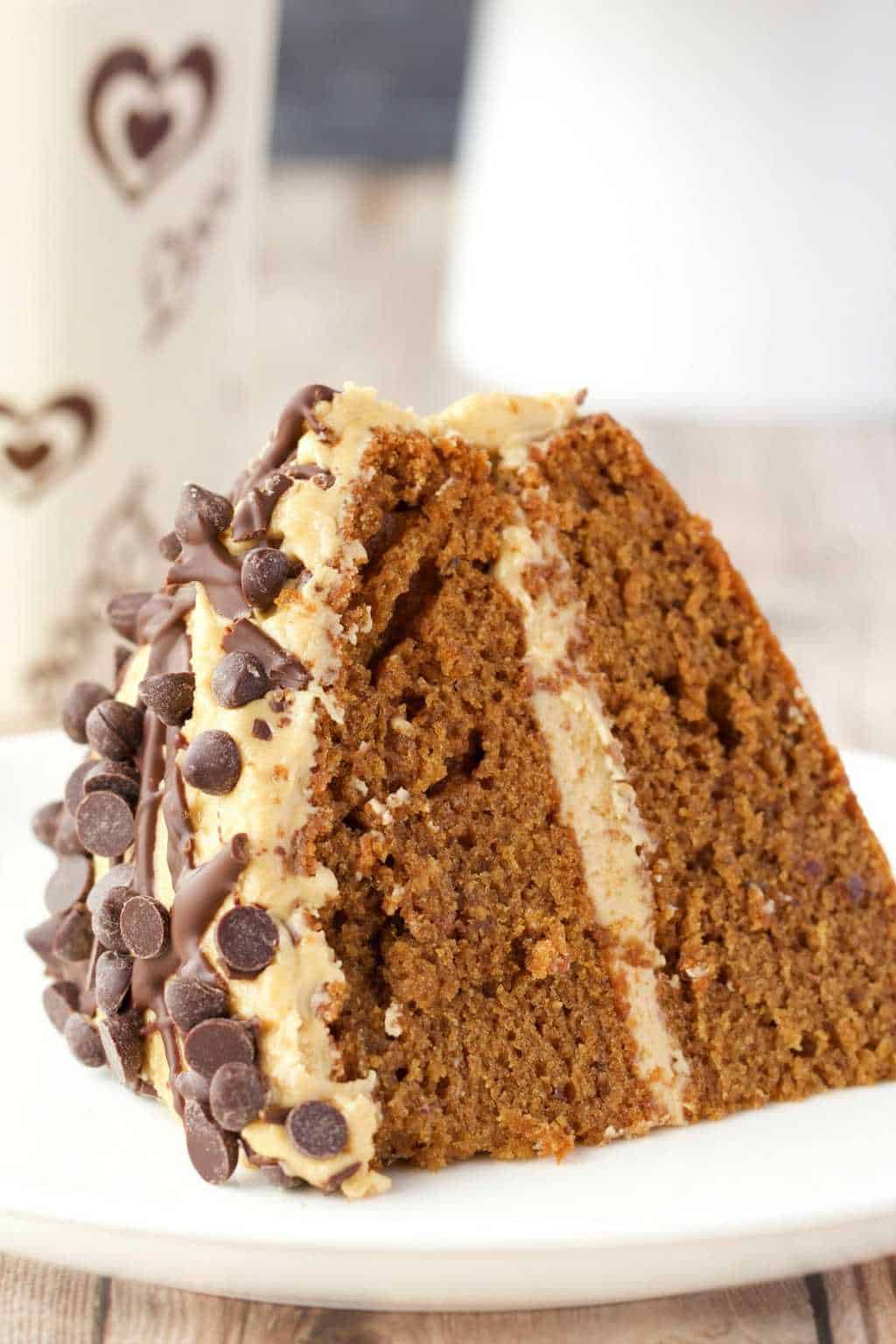 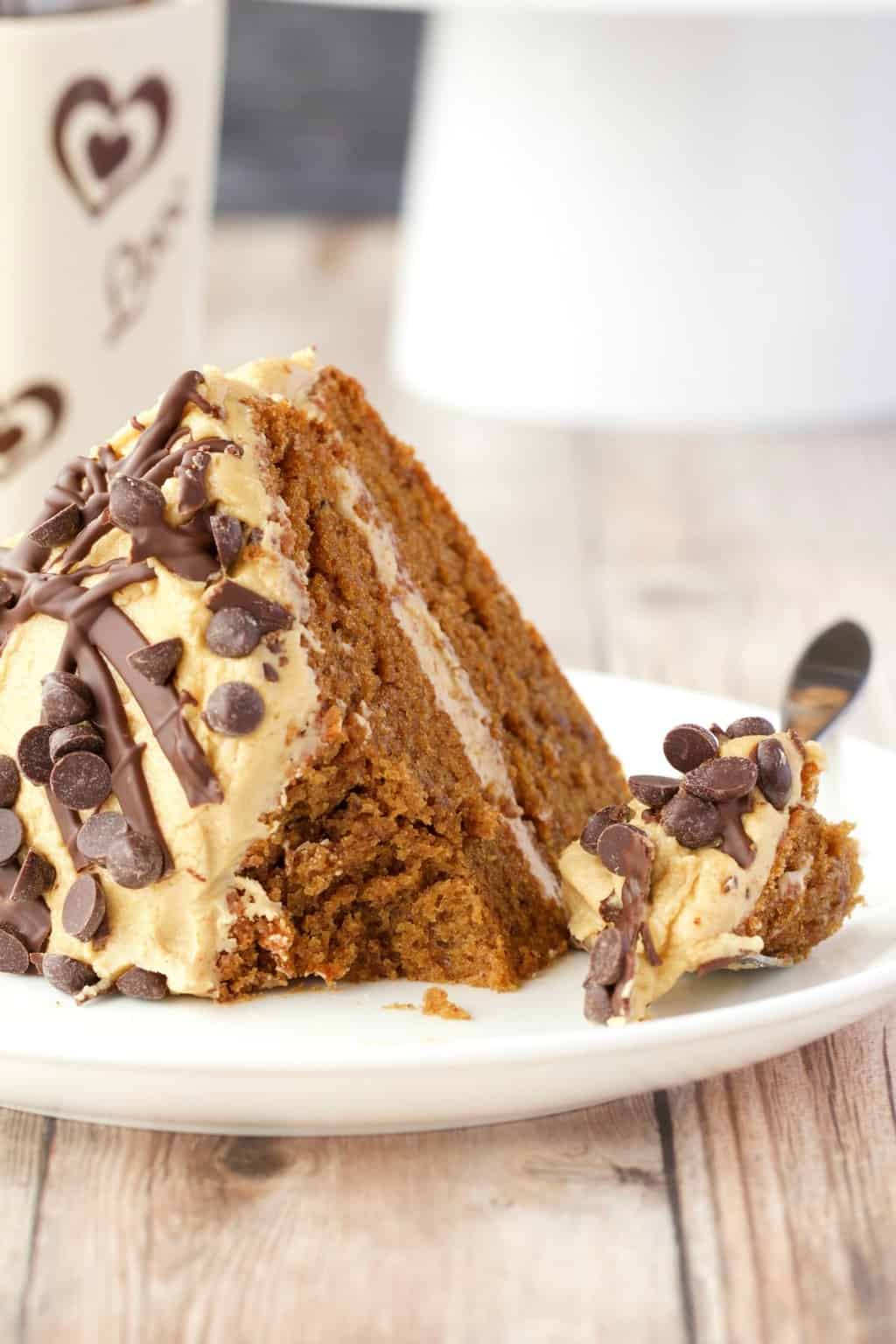 We have so much vegan cake deliciousness going on at this blog, you are so in the right place if cakes are your thing!

So let us know what you think of this vegan coffee cake! Trying it soon? Let us know! Please also rate the recipe it is so helpful.

Oh, and while you’re here, don’t forget to sign up to our email list, we’ll send you an awesome free recipe book AND you’ll stay updated with all our latest recipes! 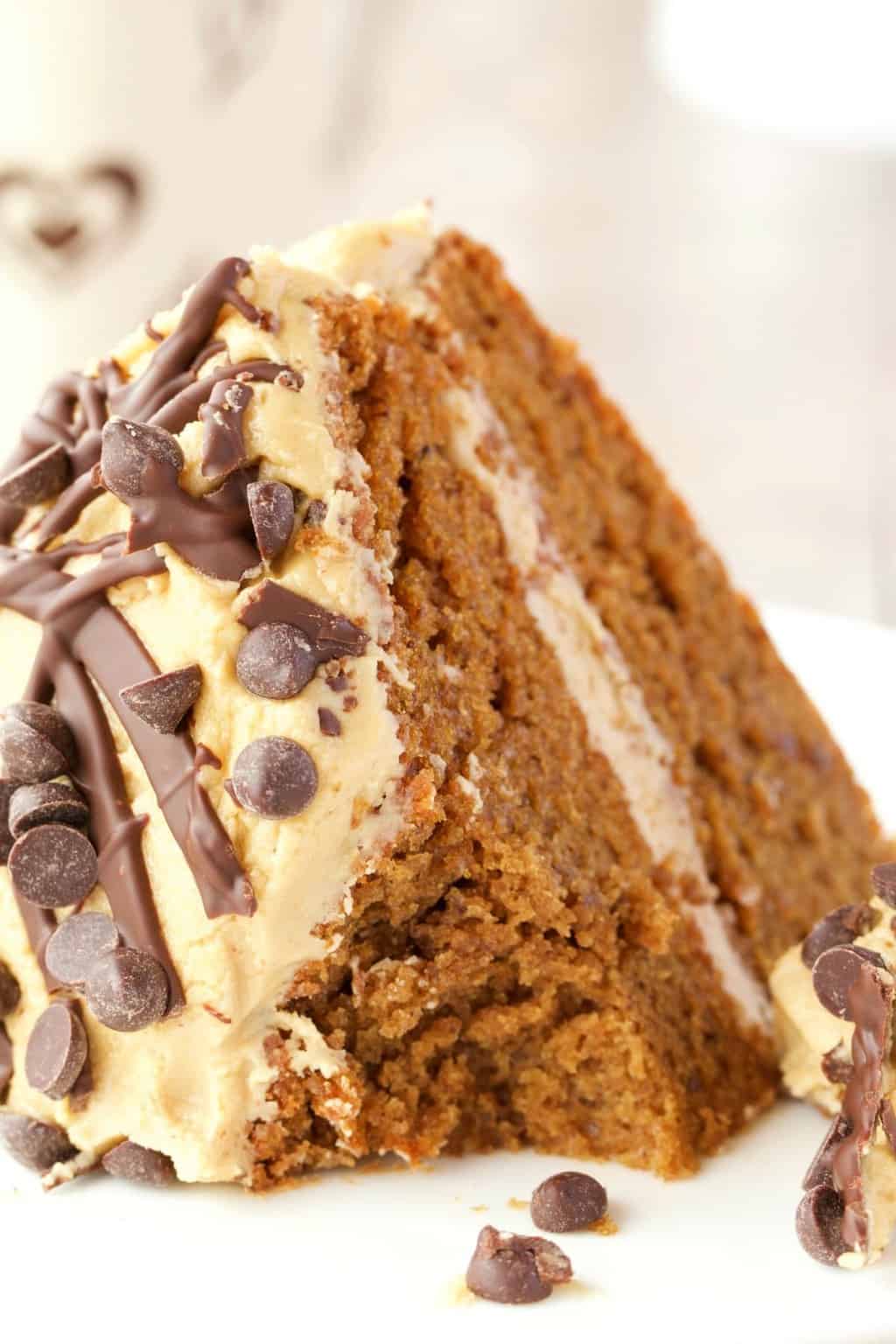 Insanely delicious vegan coffee cake with kahlua frosting. This isn’t just a cake to eat with your coffee, this is fabulously coffee flavored cake! And it’s vegan, and rich and decadent!

For the Coffee Cake:

For the Kahlua Frosting:

*You can use any vegetable oil in this recipe.

*Nutritional information is for 1 slice of 10 including frosting but excluding extra chocolate decoration.

Loving It Vegan is a participant in the Amazon Services LLC Associates Program, an affiliate advertising program designed to provide a means for sites to earn advertising fees by advertising and linking to Amazon.com. This site may contain some of these links to Amazon.com. If you make a purchase through one of those links, Loving It Vegan will receive a small commission from the purchase at no additional cost to you.
Previous Post: « Vegan Pumpkin Soup – 30 Minutes!
Next Post: Vegan Jello Shots »