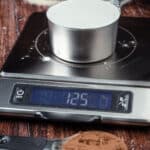 Measuring with precision makes your baked goods come out perfectly every time. Learn how many grams are in a cup for the most common ingredients.

Wondering how many grams are in a cup? The answer will depend on what you’re measuring.

If you’ve ever made a baking recipe that didn’t work out, you were probably only using cups to measure the ingredients.

It’s not a big deal when you’re measuring vegetables, but it can be quite inaccurate if you’re baking, where precise amounts of each ingredient are essential.

Learning how many grams are in a cup will help you master the art of conversions, whatever the recipe.

How Many Grams In A Cup Of Flour?

But things can get tricky, because if you pack the flour into the cup or you scoop the flour, you can end up with 50% more than you need! And then your baked goods will be dry and dense instead of fluffy and moist.

Why Use Grams Instead Of Cups?

In the USA it’s customary for recipes to call for cup measures only. But as discussed above, this can result in inconsistent baking results. So it’s much better to actually measure your dry ingredients in grams, using a food scale.

Another issue is that even when recipes call for cups, it has to be measuring cups. And maybe some inexperienced bakers don’t realize this and think a coffee cup will do! Sadly, it won’t do at all.

Grams are a unit of weight used in the metric measurement system, which is used by nearly all the world’s countries. The United States is one of only a few countries that don’t use the metric system. Luckily, it’s becoming common for recipe creators to provide both cup and gram measurements (as we do here at Loving It Vegan).

What About Measuring Liquids?

How many grams are in half a cup?

How many grams in a cup of granulated sugar?

There are 200 grams in a cup of granulated sugar.