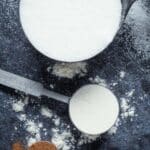 Knowing how many teaspoons in a tablespoon makes cooking and baking easy and stress free. Learn to adjust recipes like a professional chef.

Have you been in the kitchen lately and wondered how many teaspoons are in a tablespoon?

Knowing how to quickly convert teaspoons into tablespoons is a great skill to have for cooking and baking, especially when halving or doubling a recipe.

From salt to baking powder, using the exact amount of the required ingredient is one of the most important steps in ensuring your recipe comes out the way it looks in the photos.

The most important thing to know straight away is that a tablespoon used for cooking or baking purposes must be a measuring spoon.

You can’t use the same tablespoon utensil that you use for eating, it must be a measuring spoon.

How To Measure How Many Teaspoons In A Tablespoon

1 teaspoon is 5 ml and 1 tablespoon is 15ml. So you need 3 teaspoons to equal 1 tablespoon.

Why Use Teaspoons Or Tablespoons In A Recipe?

A teaspoon (tsp) or tablespoon (Tbsp) is used to measure smaller  amounts of ingredients such as salt and other spices, baking powder or liquids like baking extracts, oils, butter etc.

It’s important to know the difference between a teaspoon and a tablespoon because they are not the same size.

Abbreviations For Tablespoon and Teaspoon

A tablespoon is abbreviated to Tbsp and a teaspoon to tsp.

Why You Need To Know This

There’s nothing more frustrating than ruining a dish just because you added too little or too much salt, spice, cocoa, or baking powder.

We all know that salt, sugar, and spice can make your dish taste better. They bring out subtle flavours and allow your meal or baked goods to have that ‘wow’ factor. But too much of a good thing, as the saying goes, usually turns into a bad thing.

If your dish calls for a tablespoon of any of these ingredients, it’s better to gradually add them, teaspoon by teaspoon to reach the desired amount. Then you can taste and repeat until you get the result your tastebuds love.

Of course, when baking a dish, you only taste it at the end, but you can certainly start adapting the recipe for the next try if you find it’s too sweet or salty for you.

Converting From Tablespoons To Teaspoons

As mentioned before, 1 tablespoon = 3 teaspoons, which means:
1 teaspoon = ⅓ tablespoon.

Converting From Cups To Tablespoons

Will The Wrong Amount Of Baking Powder Affect My Baked Recipe?

Yes, you can ruin your baked goods by adding the wrong quantity of baking powder. Too little baking powder can mean that your cakes will not rise enough, and too much can make your cakes sink in the middle.

It’s important to ensure that your baked recipe isn’t a flop by measuring the exact amount of baking powder specified. Usually, 1 ¼ teaspoons of baking powder is required for every cup of flour.

How Many Tablespoons In A Stick of Butter?

How Much Does A Tablespoon Of Sugar Weigh?

Since tablespoons are a measure of volume, not mass, the weight of a spoonful of sugar depends on what kind of sugar you’re using. In general, 1 tablespoon of granulated sugar weighs about 12½ grams.

How many tablespoons are in a teaspoon?

A tablespoon is bigger than a teaspoon, so, one teaspoon would equal ⅓ of a tablespoon.

How many teaspoons are in a half a tablespoon?

How many teaspoons in 3 tablespoons?

How many tablespoons are in a ¼ cup?

There are 4 tablespoons in a ¼ cup.

How many teaspoons in an Australian (AUS) tablespoon?

In Australia, one tablespoon is equal to four teaspoons.

What Is a dessert spoon?

A dessert spoon is a unit of volume used in the United Kingdom, Australia, Canada, and New Zealand. It is approximately 10 mL, which means it is sized between a tablespoon and teaspoon.