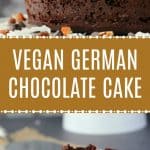 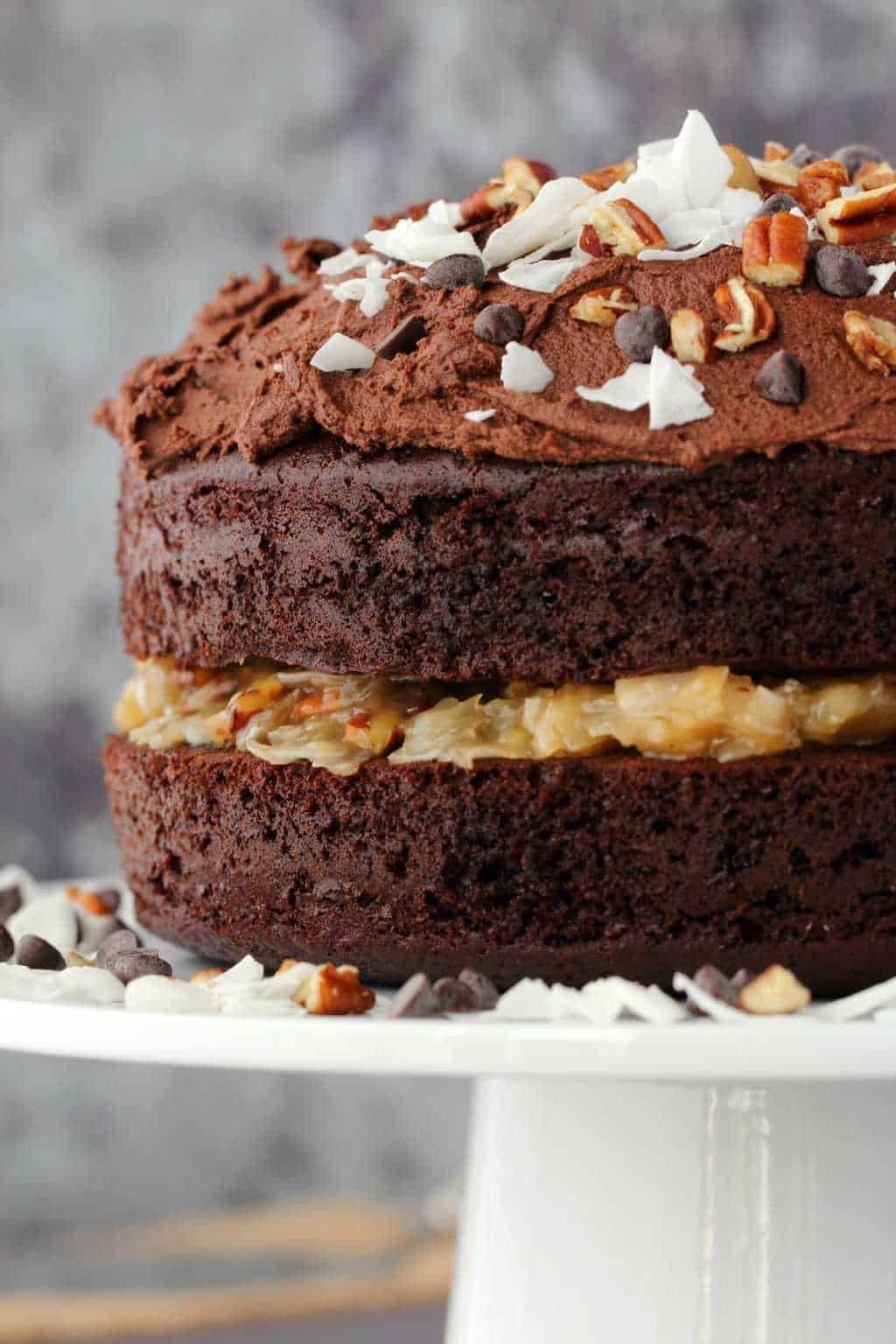 Traditionally a German chocolate cake uses sweet German chocolate in the cake itself, and then the filling is made with egg yolks, so of course we are straying from the traditional here with our vegan adaptation but the result is so good I don’t think anyone would complain! 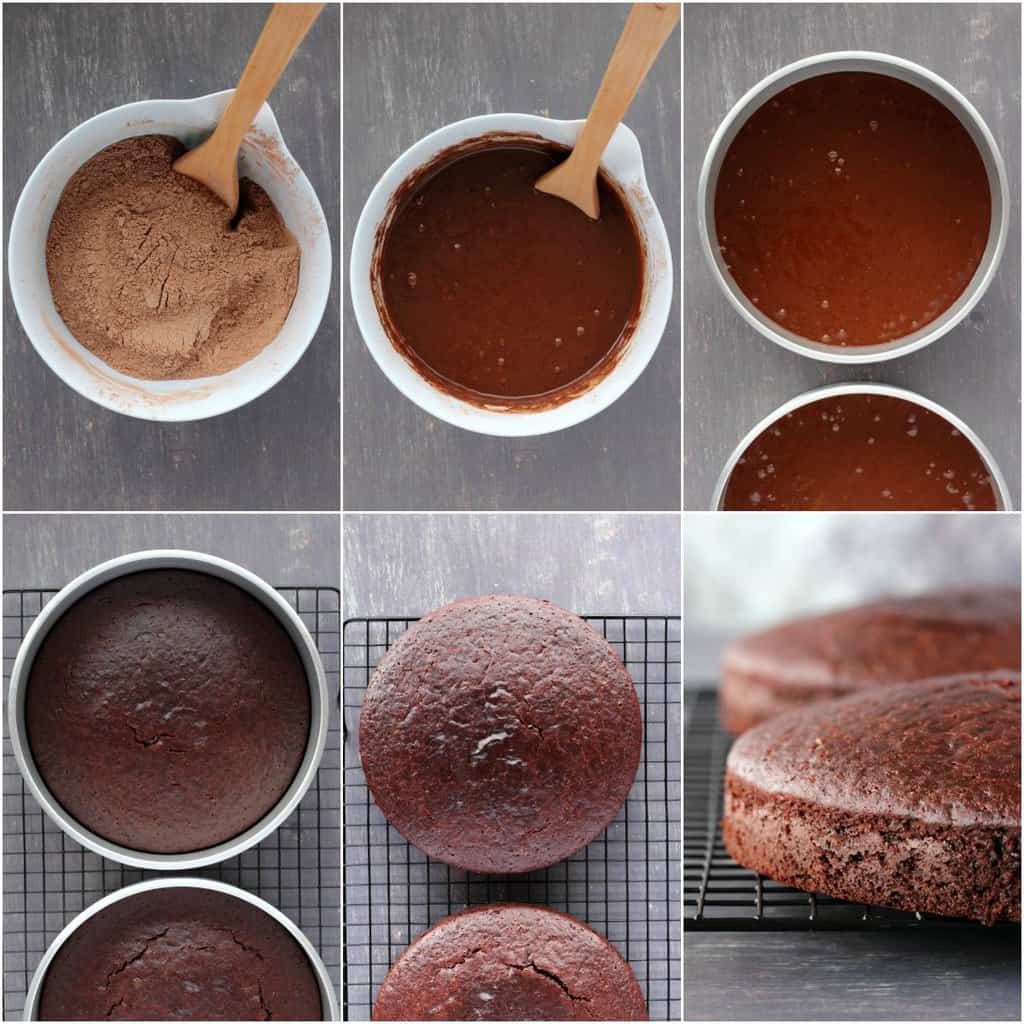 The cake recipe is super simple and straightforward, no fancy ingredients, but it results in pure chocolate cake perfection, moist and spongey and a total delight in taste and texture. 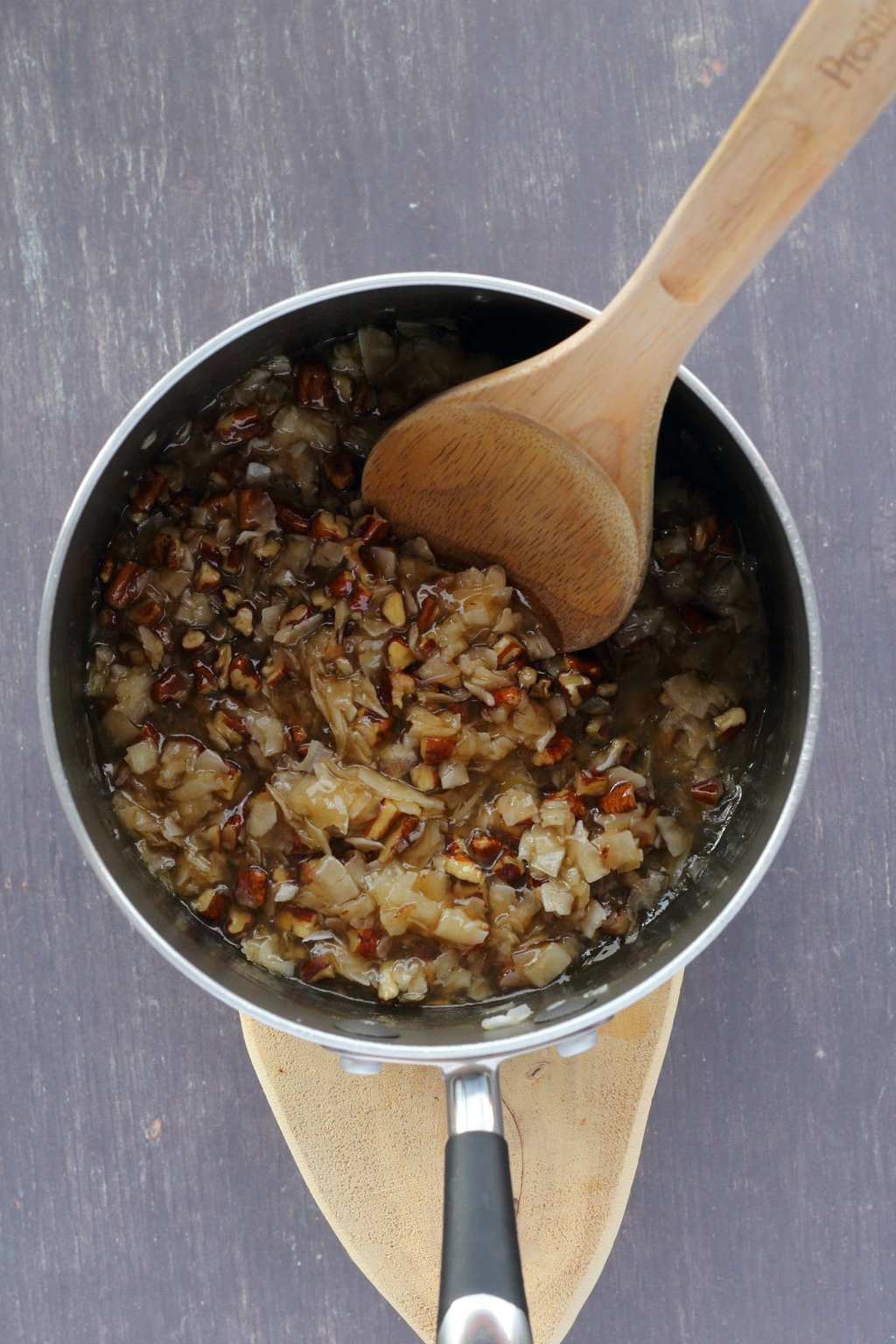 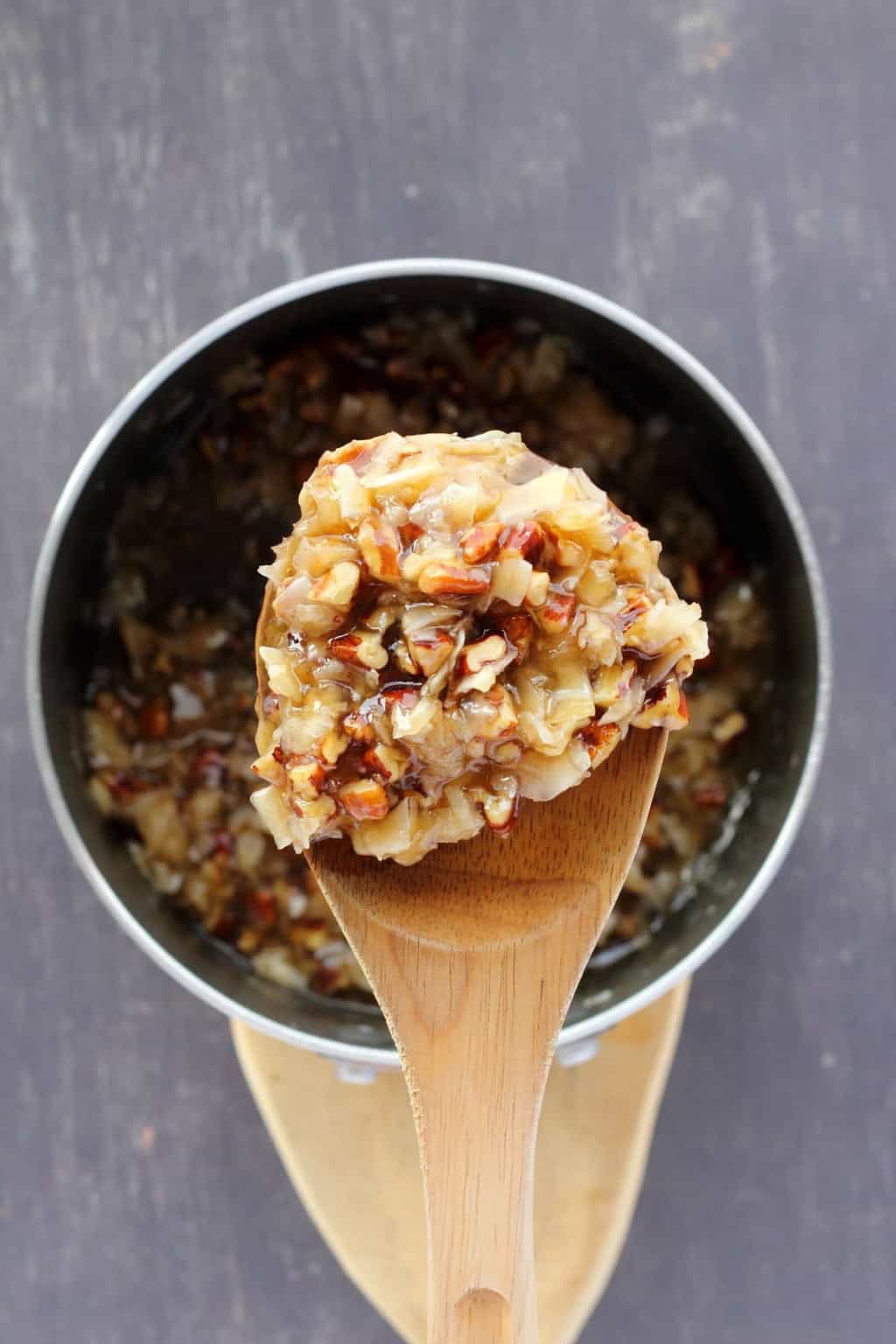 But the main attraction in a German chocolate cake is the coconut pecan filling! It’s really the stand out feature of this cake and what makes it unique and special.

It’s a mix of vegan butter, brown sugar, coconut milk, coconut flakes (or shredded coconut) and pecans! You can use roasted pecans or raw. I was planning to use roasted pecans but was only able to get raw pecans when making this cake, and I wasn’t in the mood to roast them first, so I just used them as they were and it was totally delicious. So use whichever version you prefer or is easier to get hold of.

Same thing for the coconut, I used coconut flakes, which are the quite large flakes of coconut you can see below, but you can also use shredded coconut, which is the slightly smaller version, just don’t use dessicated coconut because that won’t work well here. 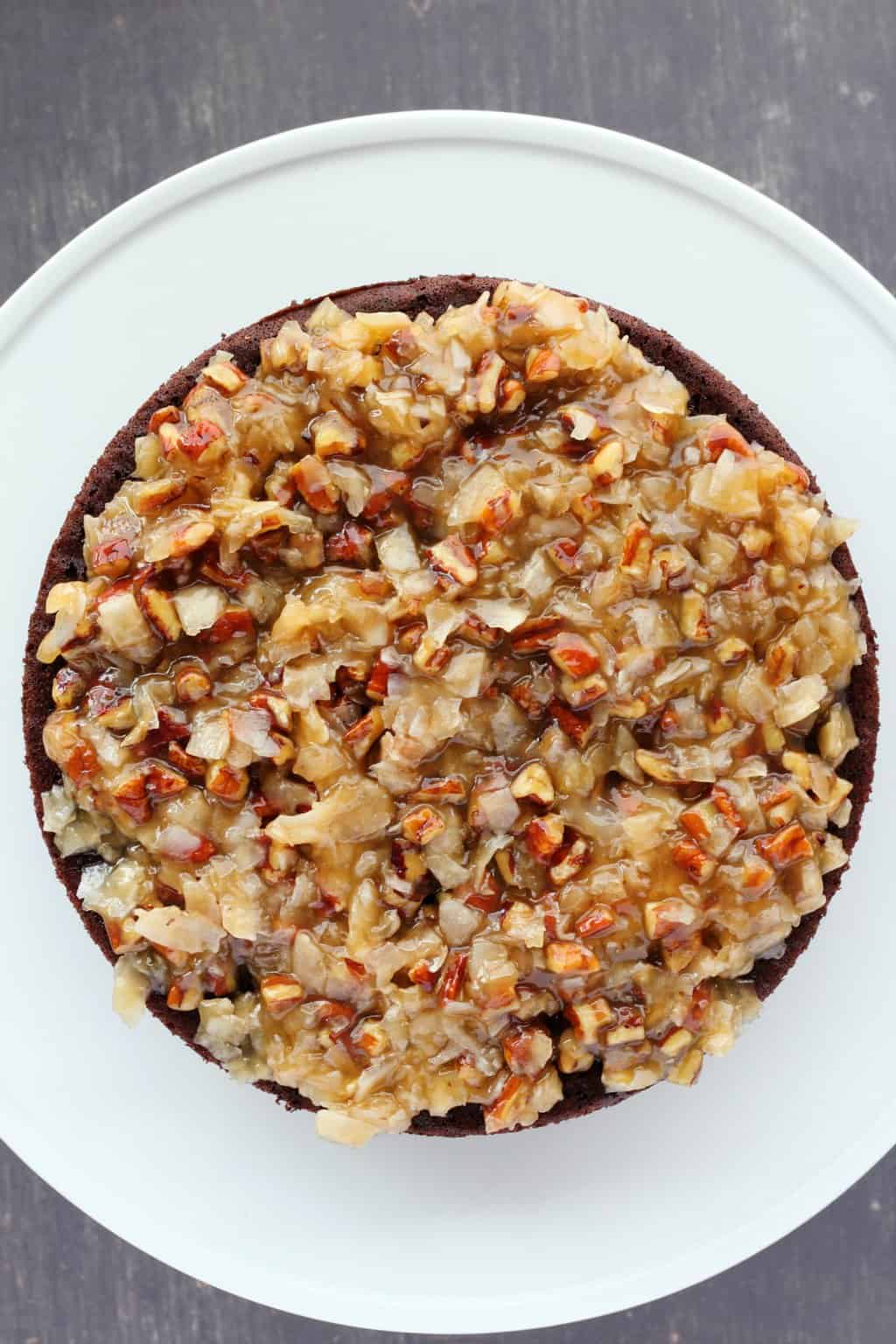 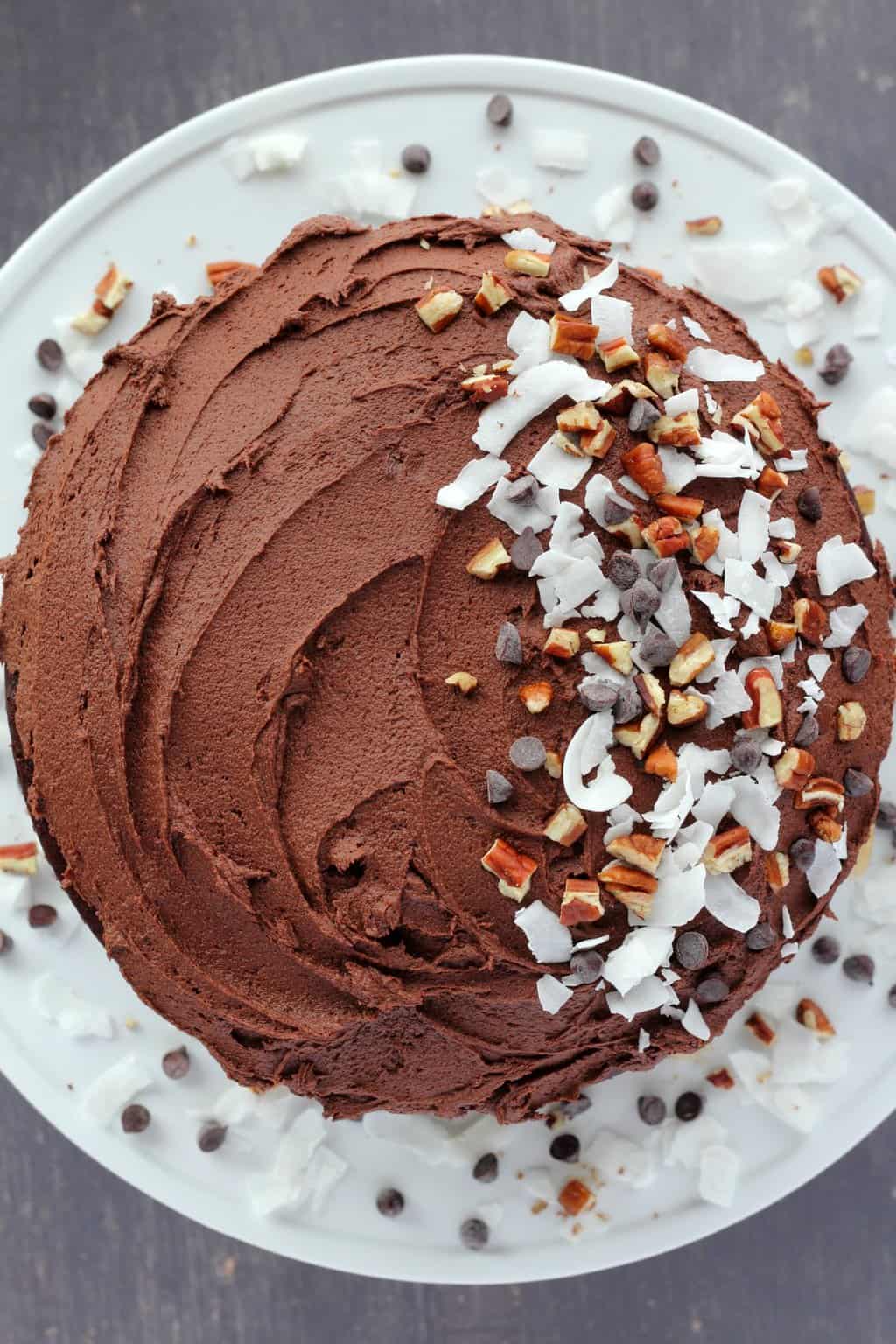 The gorgeous coconut pecan mix goes in the middle of this vegan German chocolate cake, and a delicious chocolate buttercream frosting goes on the top. I made enough for a very thick layer of frosting on top, so I’m pretty sure if you want to frost the sides as well, you’ll have enough frosting to do so without increasing the recipe.

I was a fan of keeping the sides bare so you can show off that lovely coconut pecan layer. 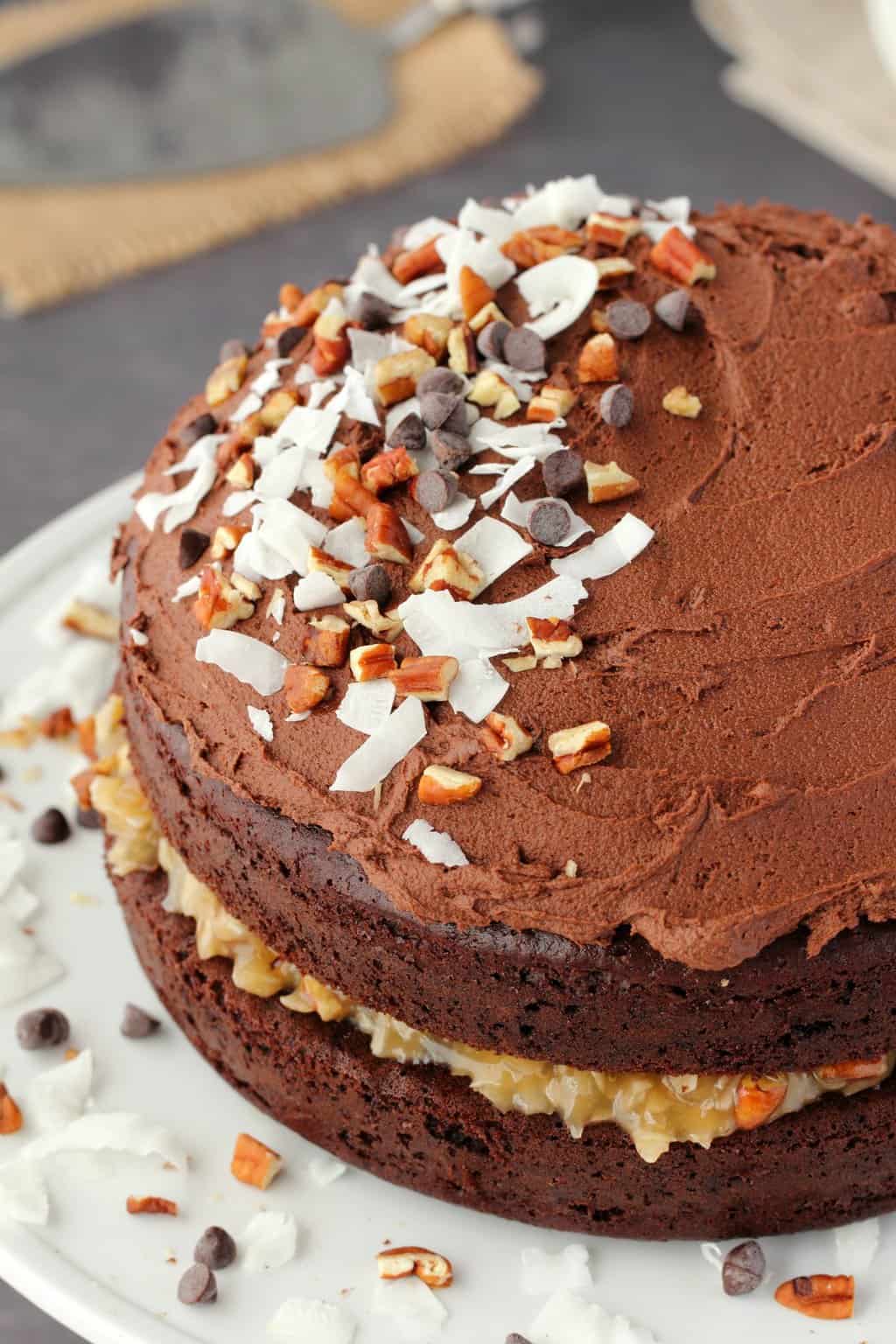 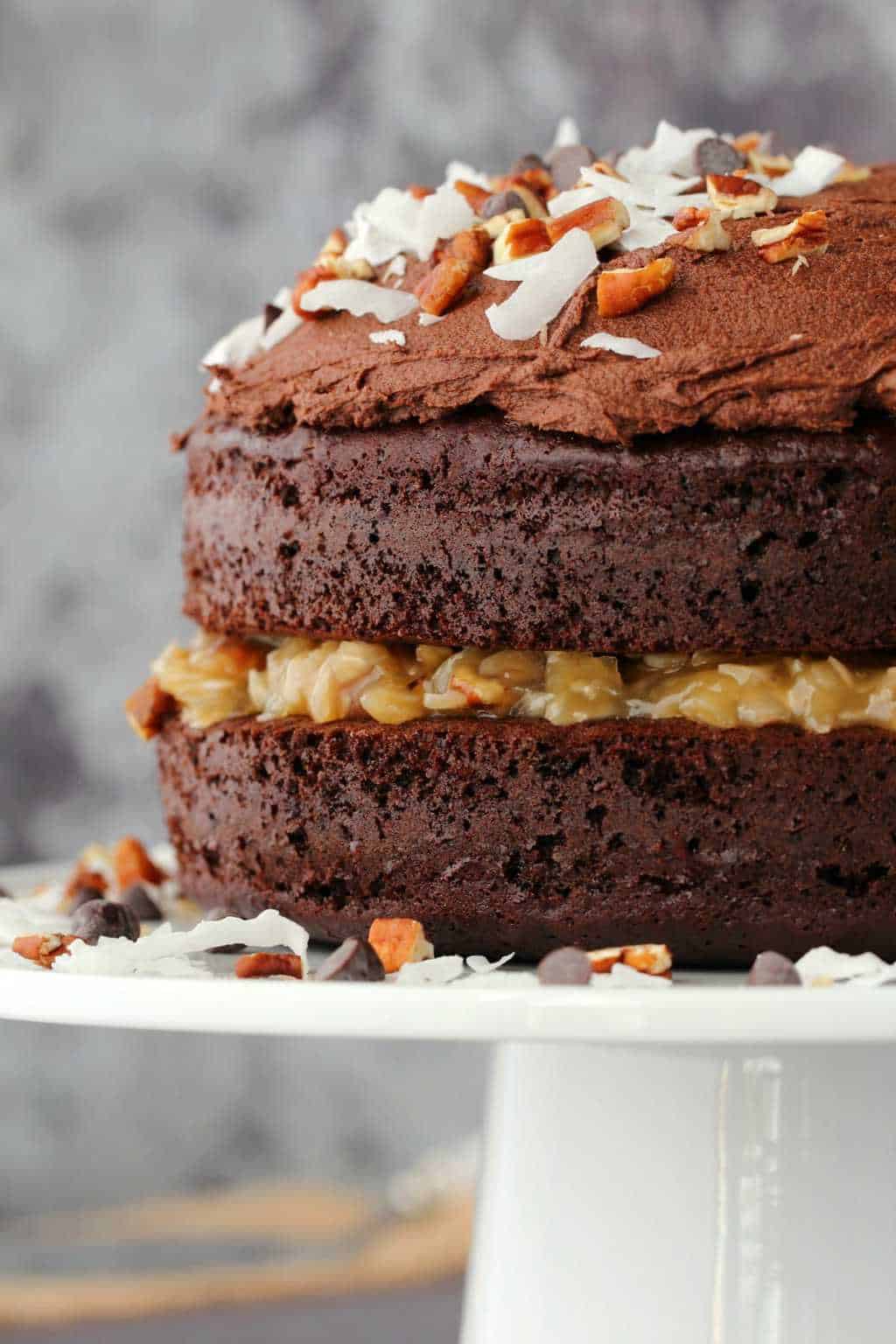 I really hope you will love this vegan German chocolate cake, it has:

Keep leftovers covered in the fridge where they will stay good for 5 days. 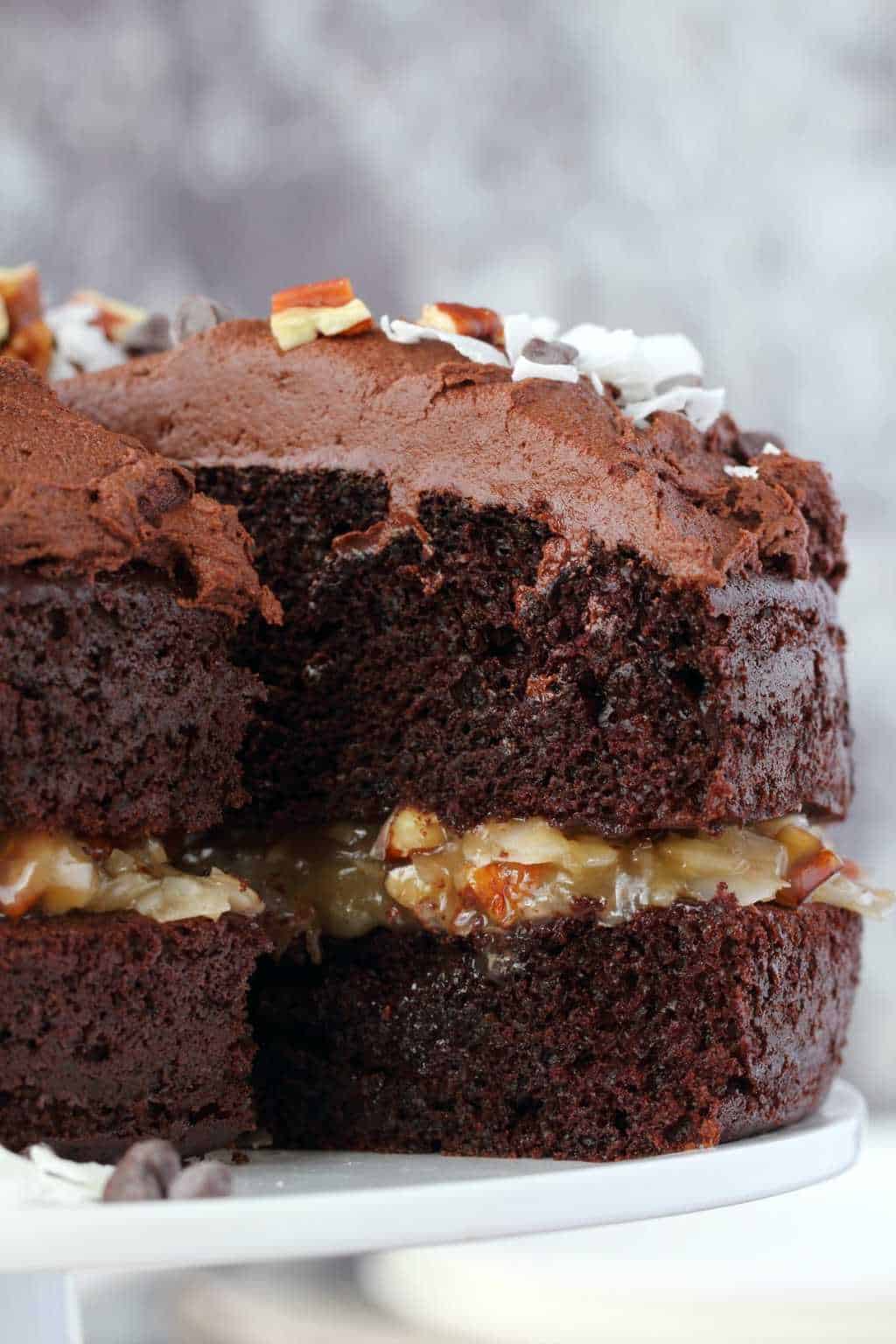 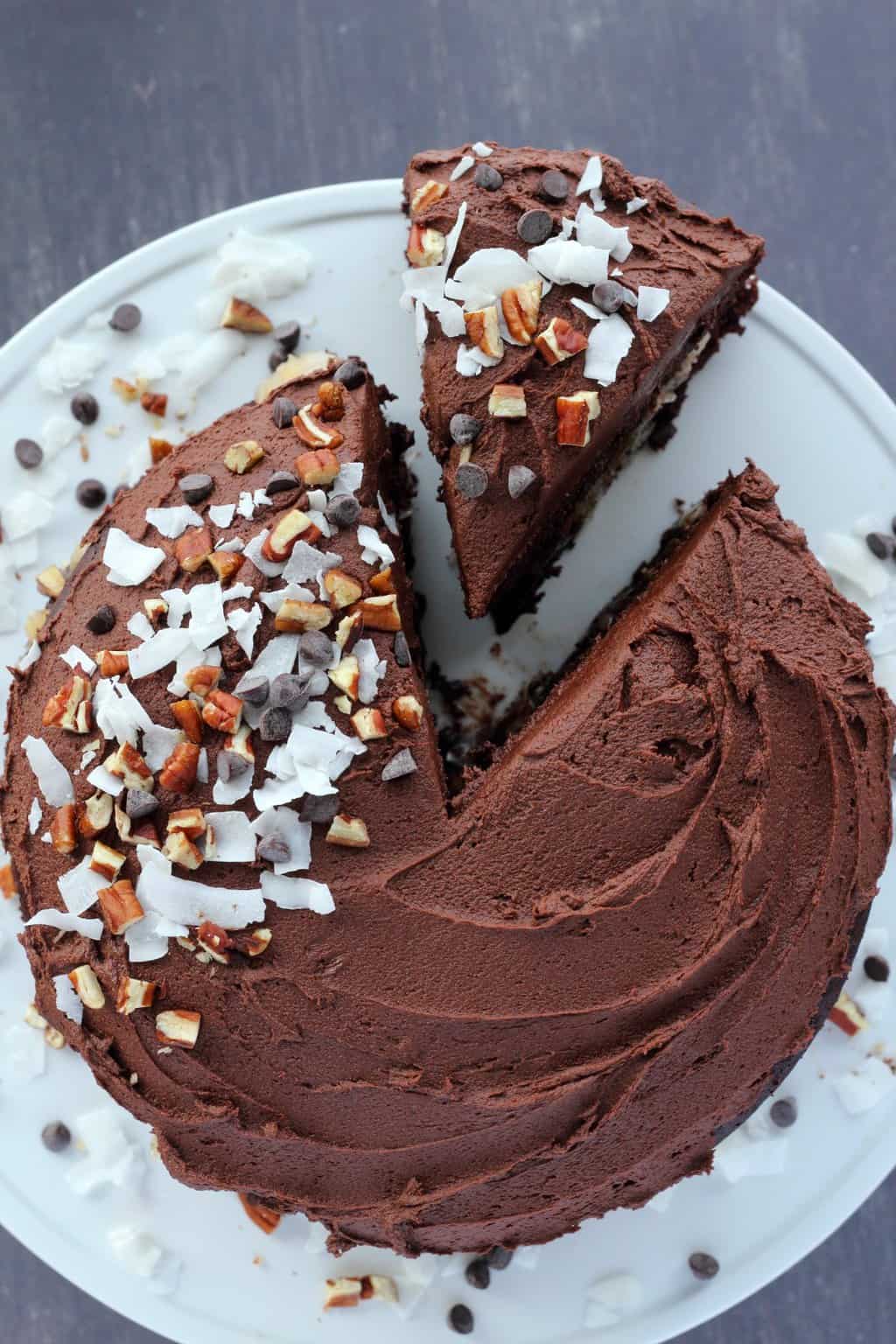 So let us know what you think of this vegan German chocolate cake in the comments and please rate the recipe too!

We have a large selection of delicious vegan cake recipes, here are a few of the options:

Sign up to our email list for a fabulous vegan dinner recipes ebook containing 10 gorgeous recipes and to stay updated with all our latest recipes posted to the blog. 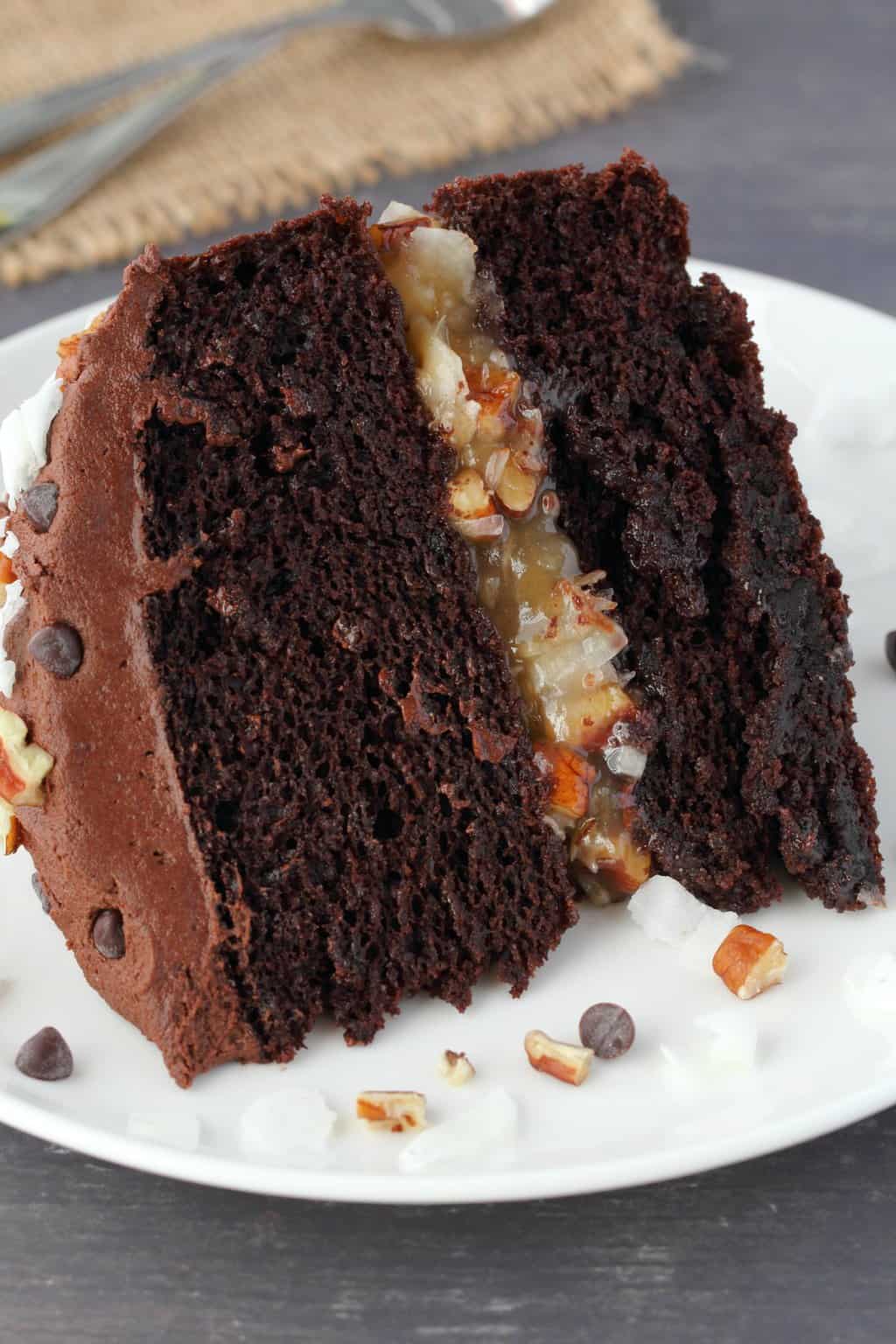 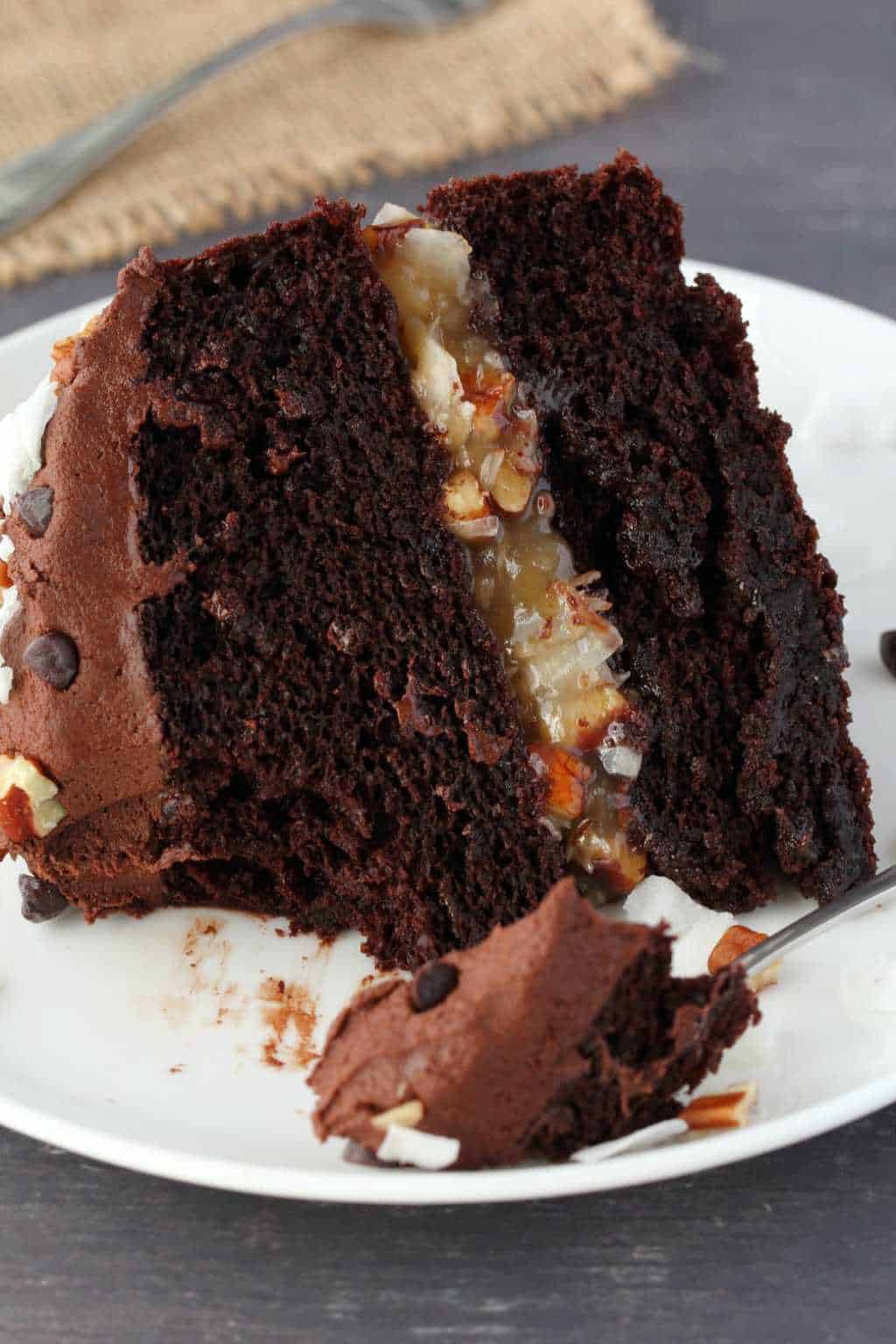 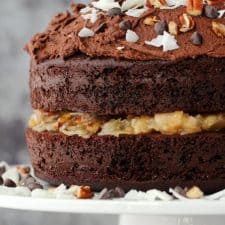 For the Vegan Chocolate Cake:

For the Coconut Pecan Filling:

For the Chocolate Buttercream Frosting: