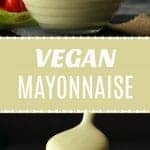 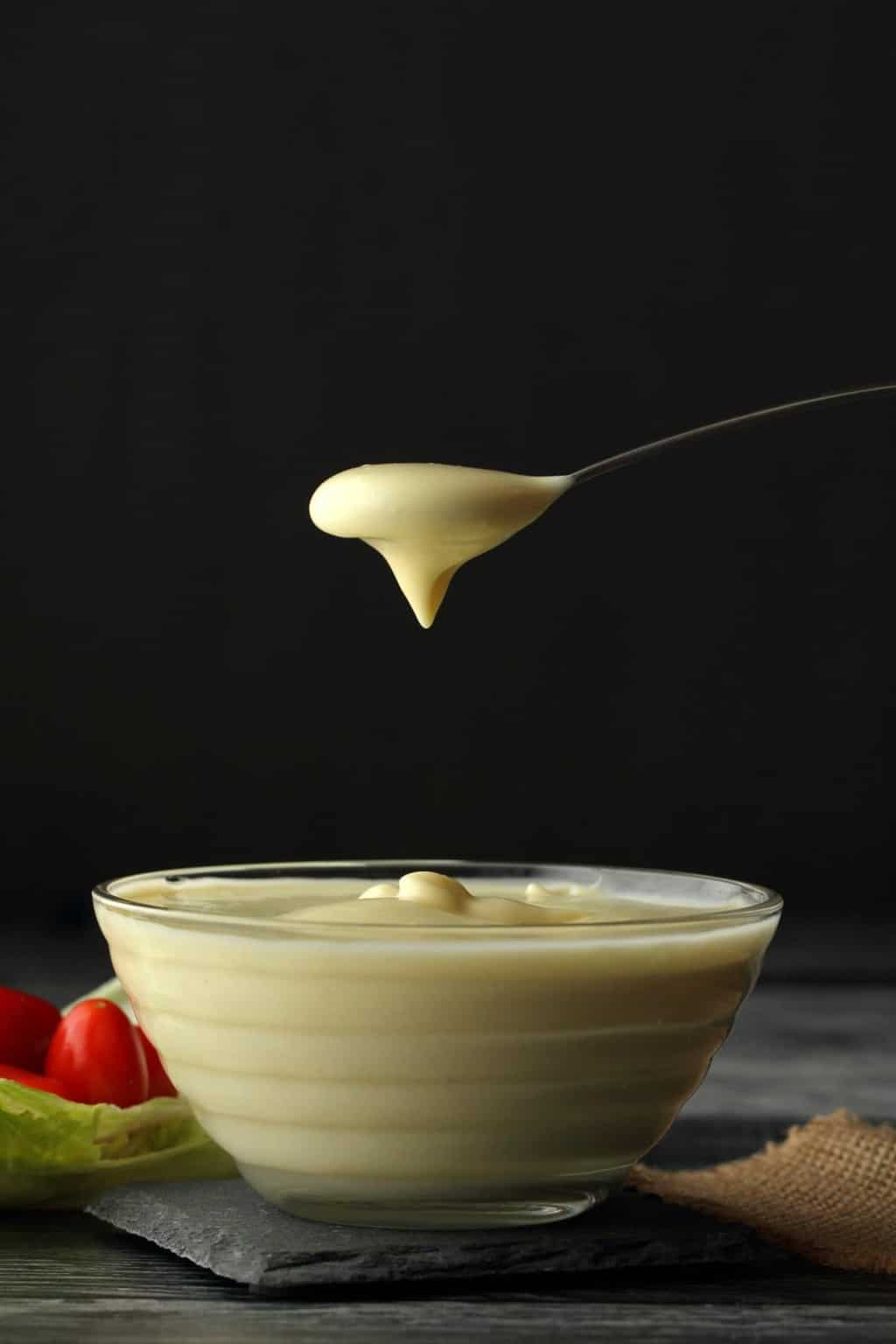 So if you’ve seen my recipe for vegan mayo then you already know that I think making your own vegan mayonnaise is pretty much like magic!

It’s so easy and you actually won’t believe how quick it is! 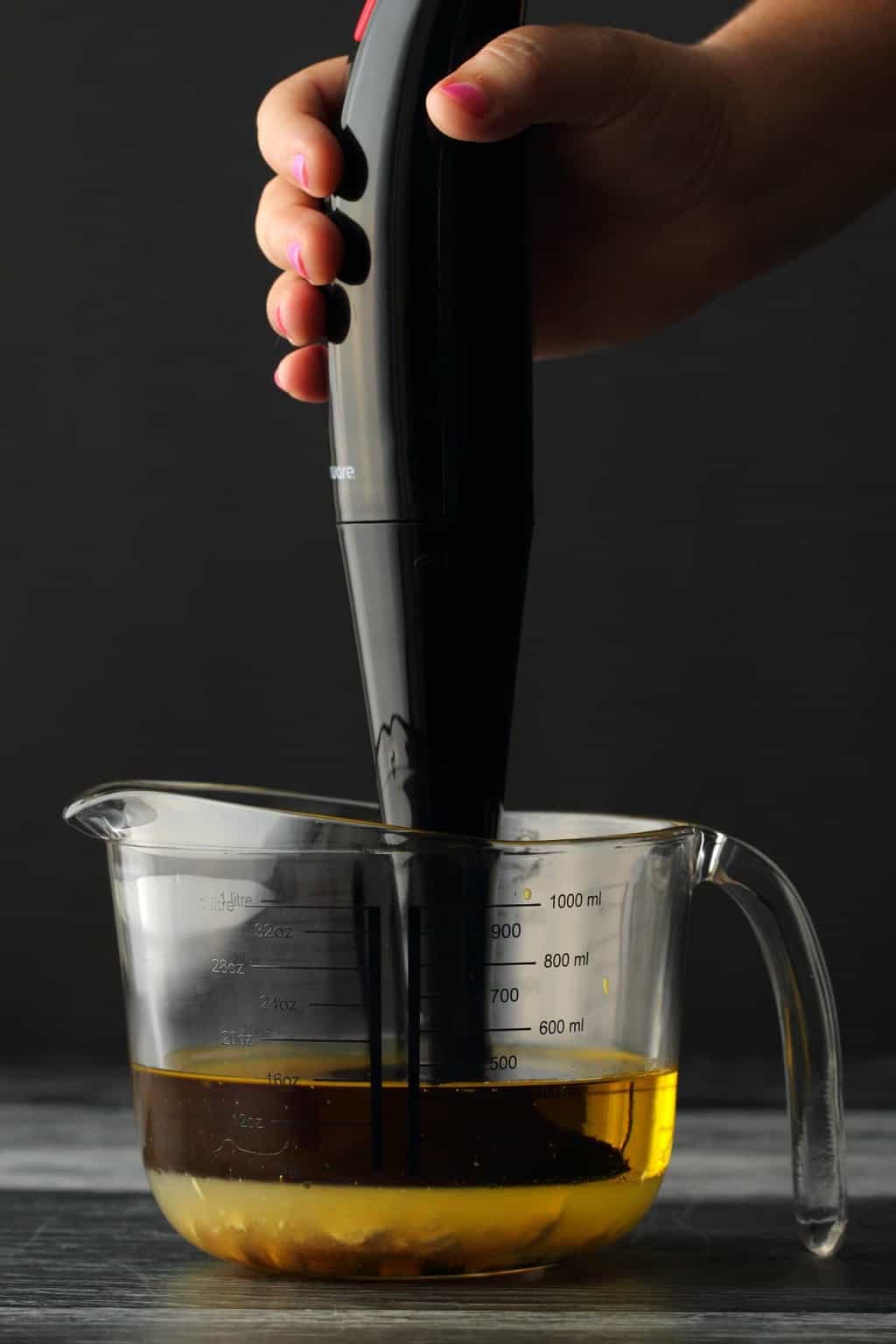 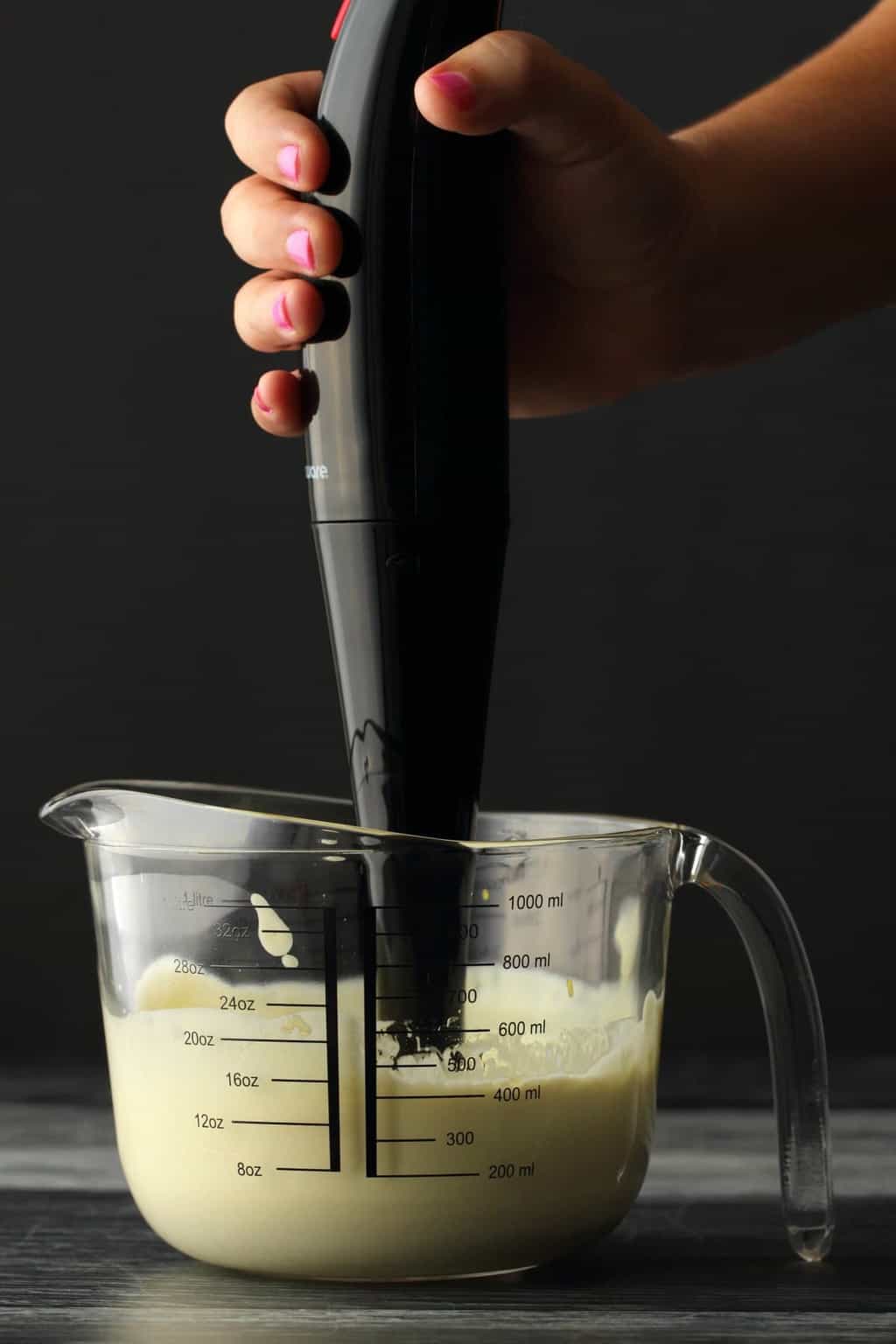 Basically – we use the water from a can of chickpeas. This acts much the same as egg whites do. The proteins and starch from the chickpeas leach out into the water so that the chickpea water behaves like egg whites, I even made some vegan meringues with it (check those out!).

If you want to find out more about aquafaba, then check out the official website for it aquafaba.com. 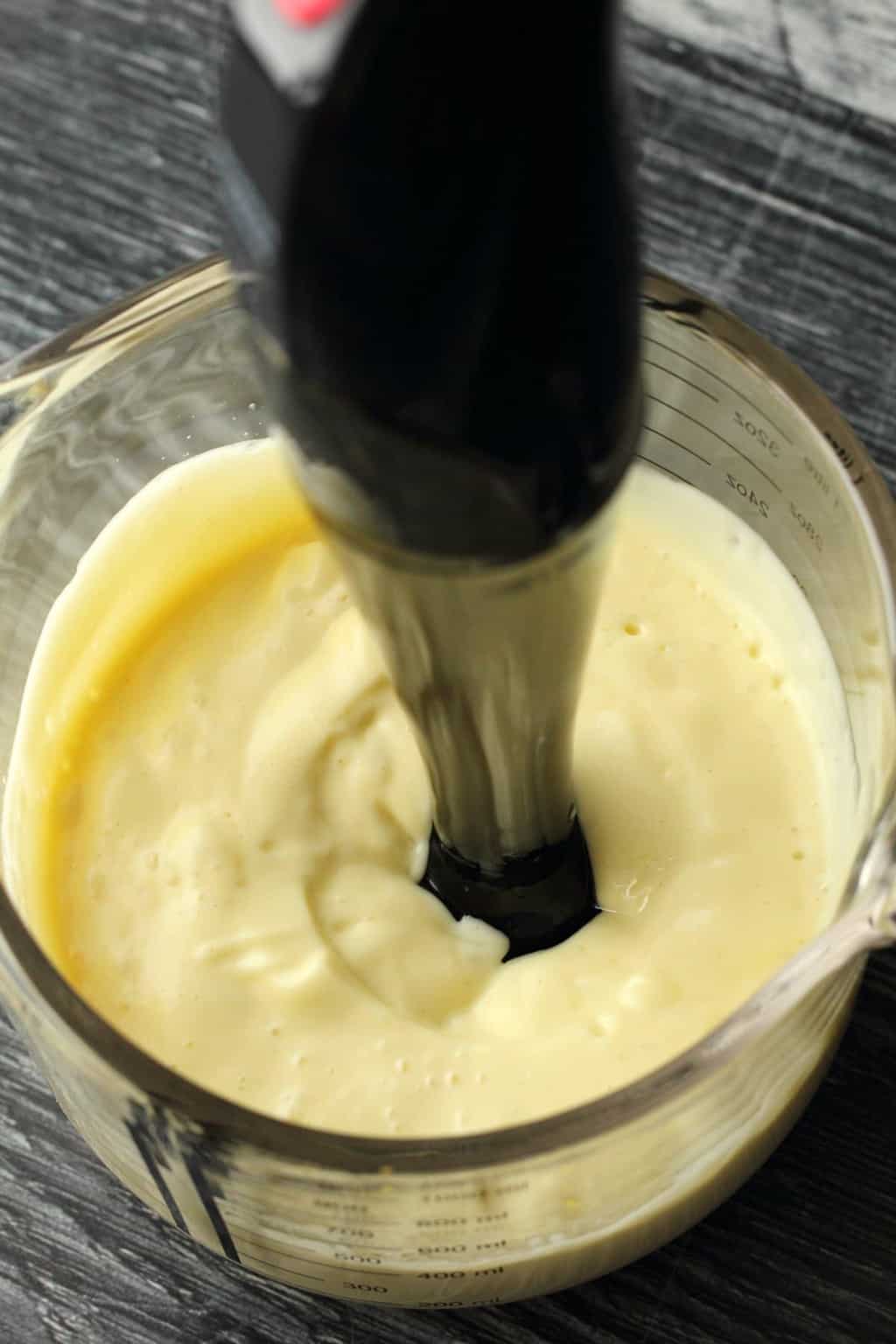 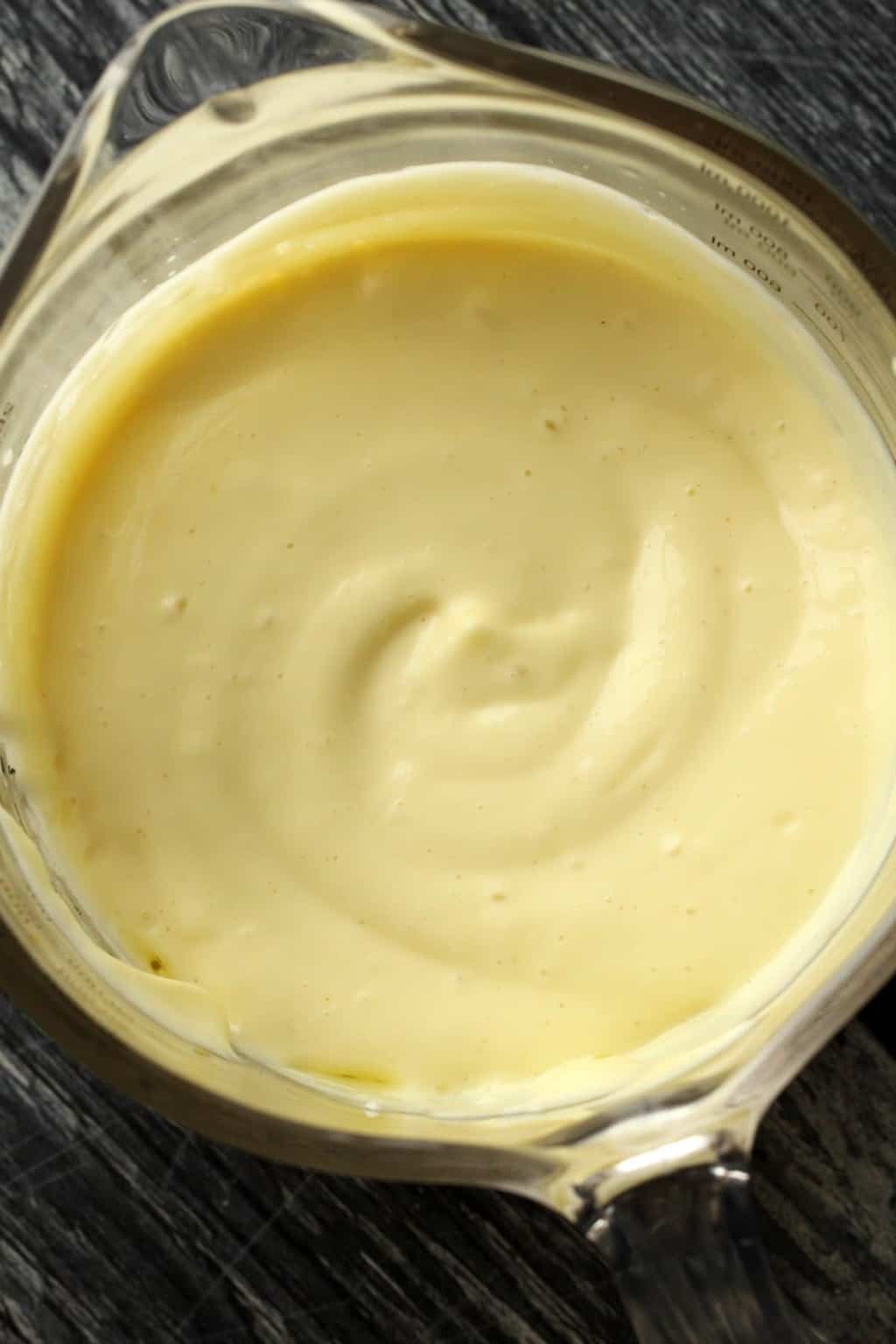 This recipe works best with an immersion blender. I have made it in my Vitamix, but I have a variable speed setting on that, so I’m not sure how much of an impact that had on my success. I was able to start at slow speed and perhaps that is why I had success.

There can be quite a lot of variance between different kinds of blenders, whereas immersion blenders are really quite similar, so you are going to get the most reliable results with an immersion blender.

Don’t try this in a stand mixer or a food processor, neither of those options worked for me at all.

But even if you have an issue with a batch of mayonnaise that doesn’t want to emulsify, sometimes you can still save it. Leave it for a bit and then come back to it and use an immersion blender and emulsify it. I have had that happen where I could not get a batch to work in a stand mixer (which is how I know that does NOT work), but then transferred it to a bowl and used the immersion blender and then it did work.

You can use different kinds of oils, but avocado oil works really well as a base ingredient here as it’s very neutral flavored and blends well with the other ingredients. The overall flavor works SO well here.

It’s so good and yet so different in flavor to my other vegan mayo recipe (that is ALSO so good) that it warranted two mayonnaise recipes for the blog. Each recipe was so good and so different to the other that I had to do both! 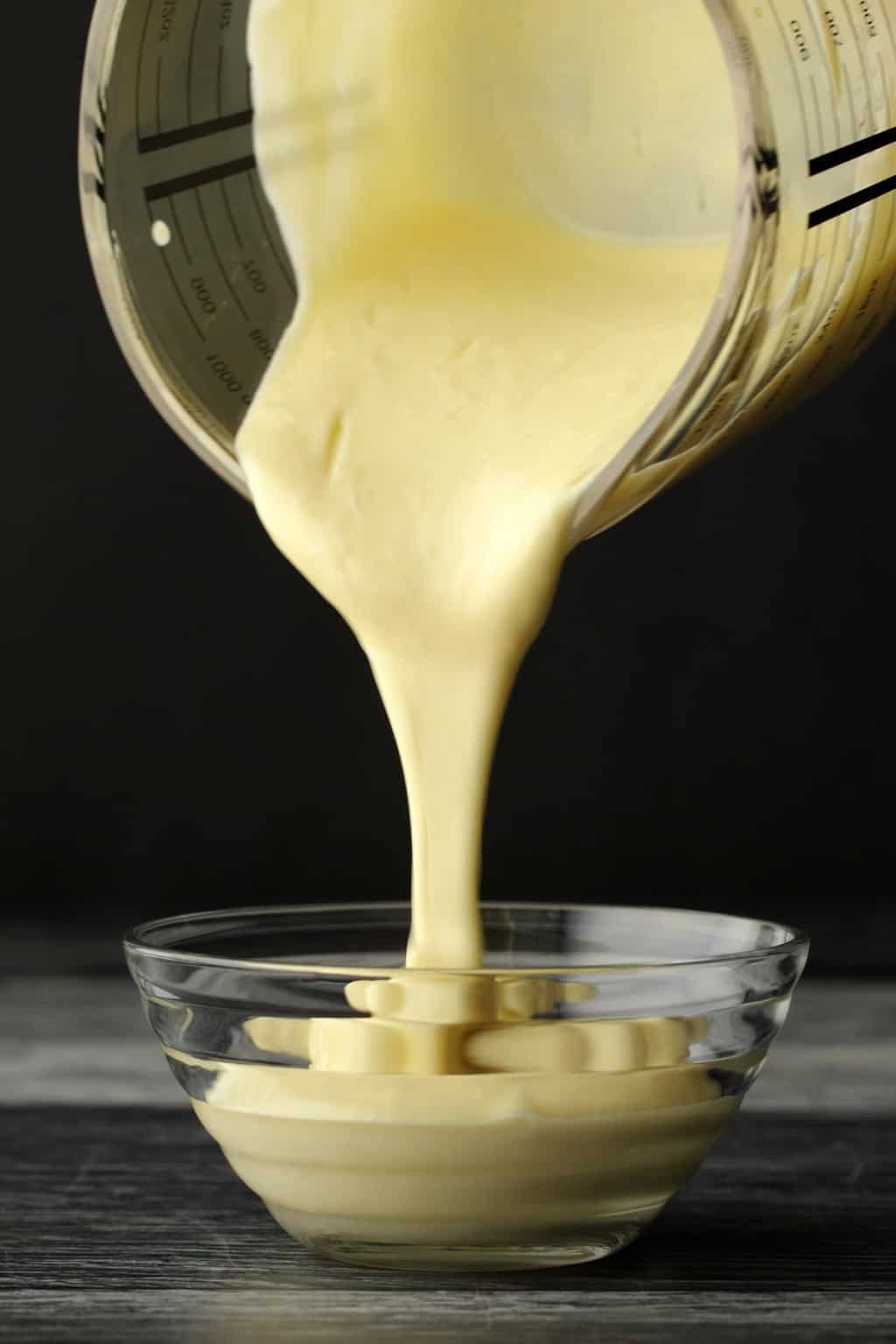 This vegan mayonnaise is more like a salad cream in the sense that it is pourable, it’s thinner in consistency so makes a really good salad dressing. It’s also really tangy and creamy, all those good things you want in a delicious salad cream. 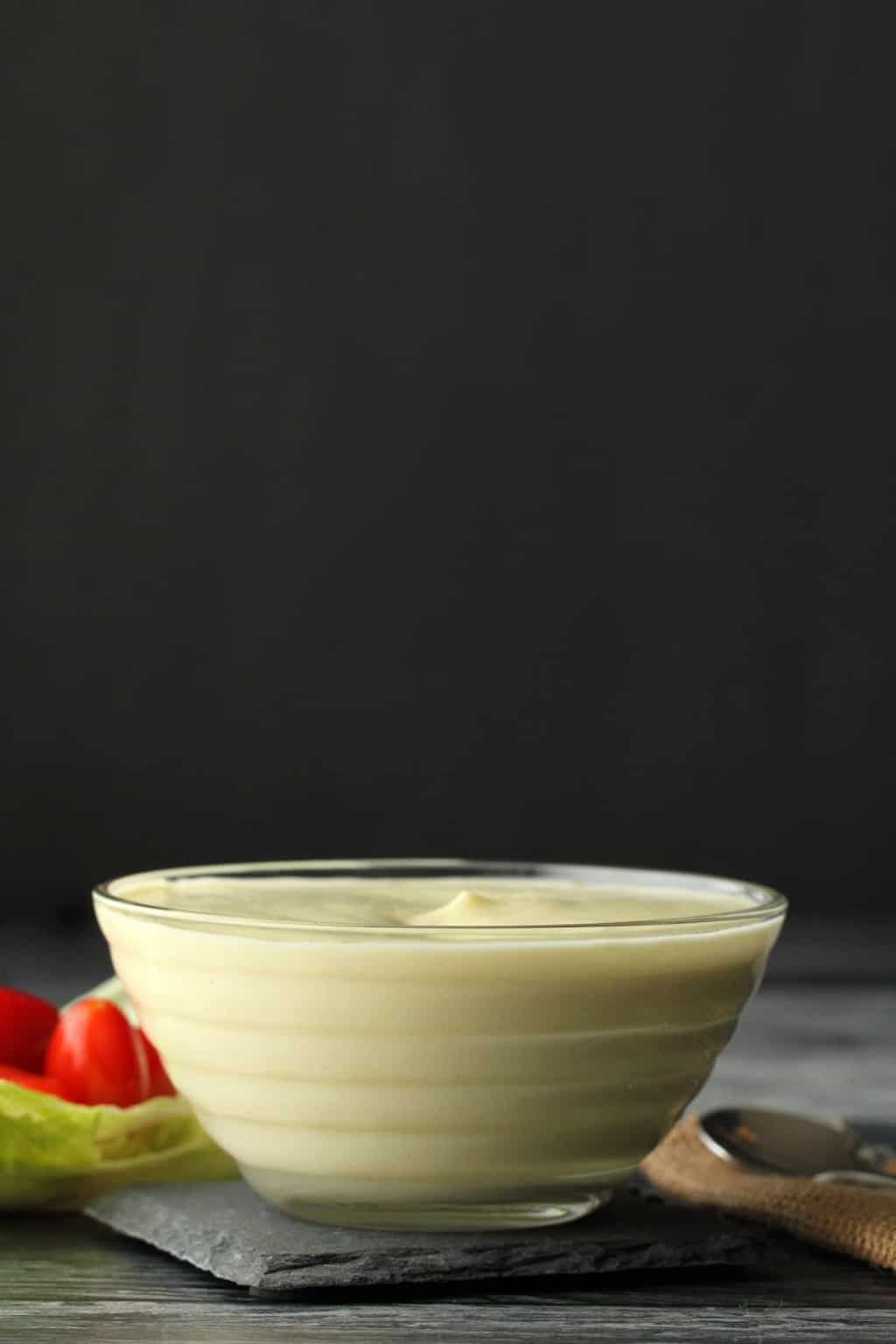 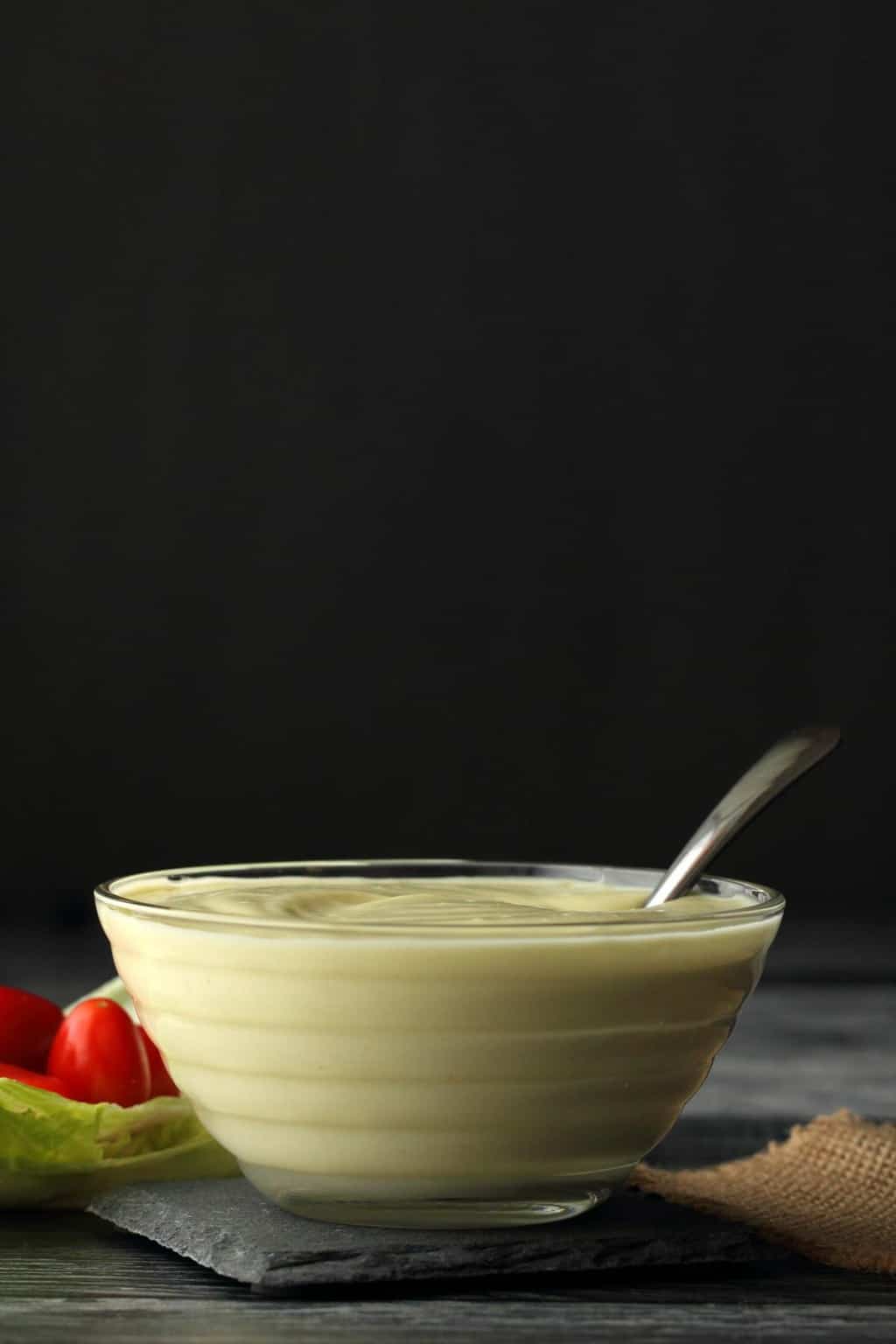 It tends to thicken up in the fridge.

The oils in the mayonnaise are very stable but the aquafaba is like egg whites in the sense that it is also not long lasting, so the shelf life of this mayonnaise is not super long like a store-bought vegan mayonnaise would be.

So if you won’t be consuming it within a few days you could make a smaller batch. 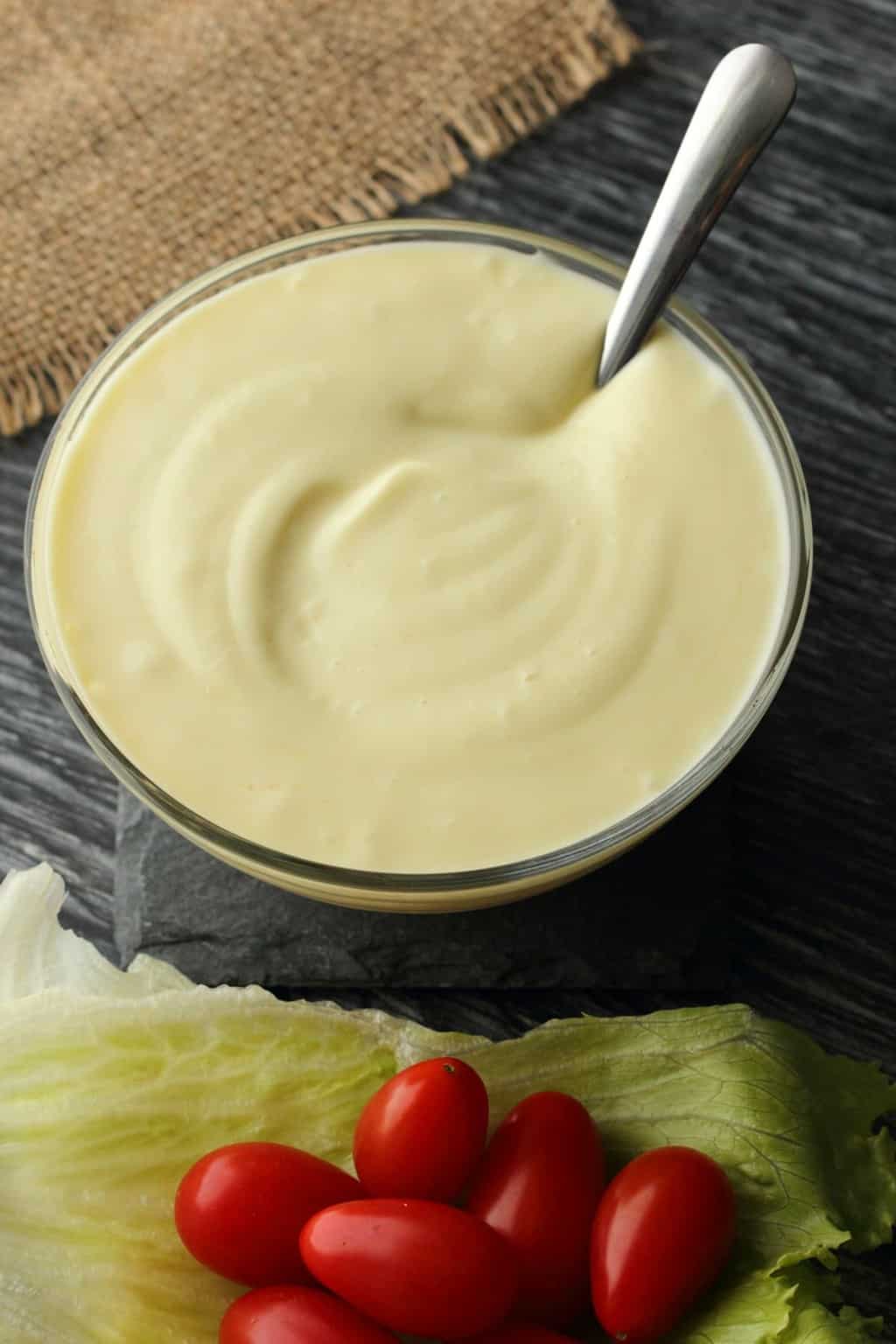 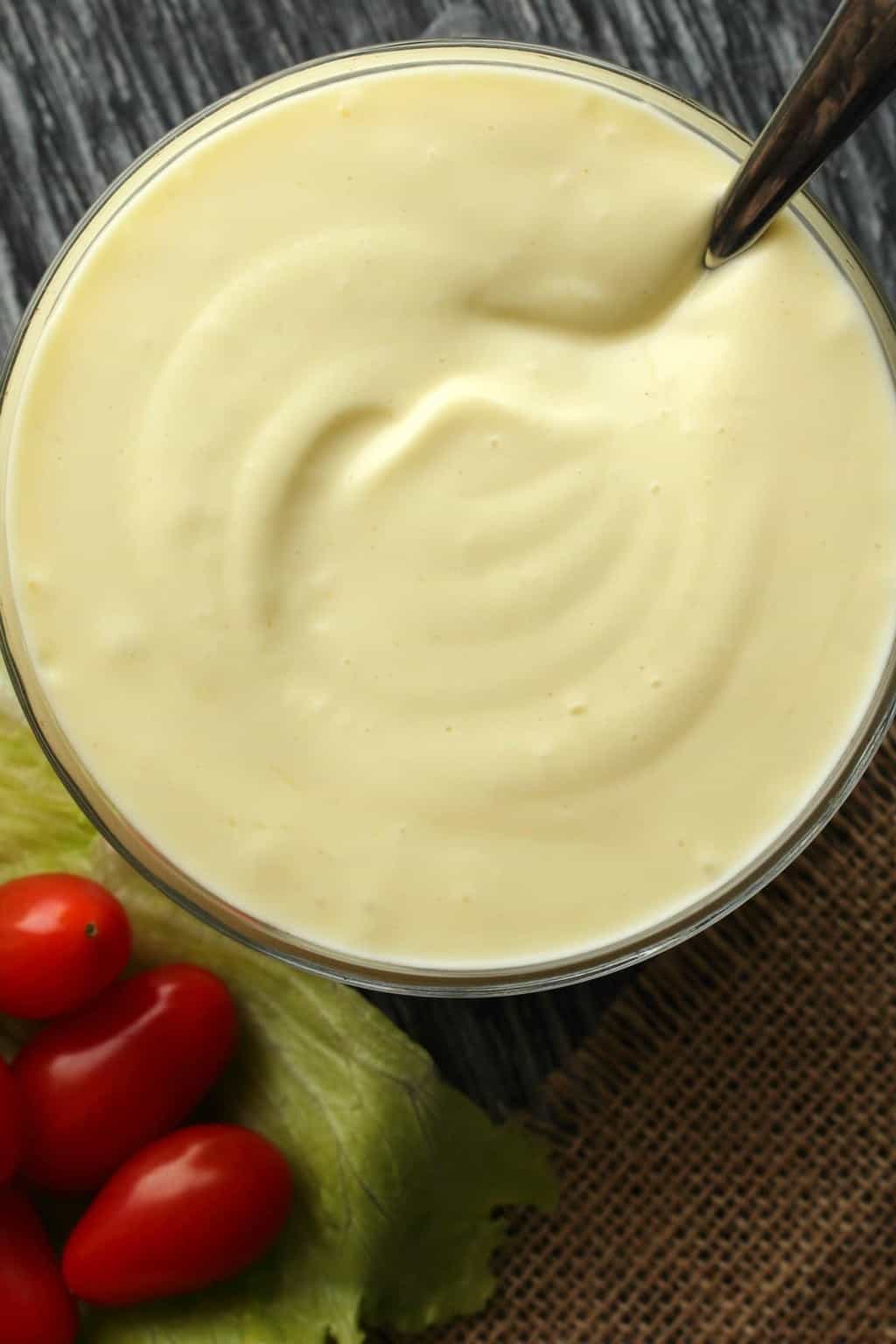 I hope you will love this vegan mayonnaise! It is:

Keep it in a sealed container in the fridge and consume within 4-5 days. 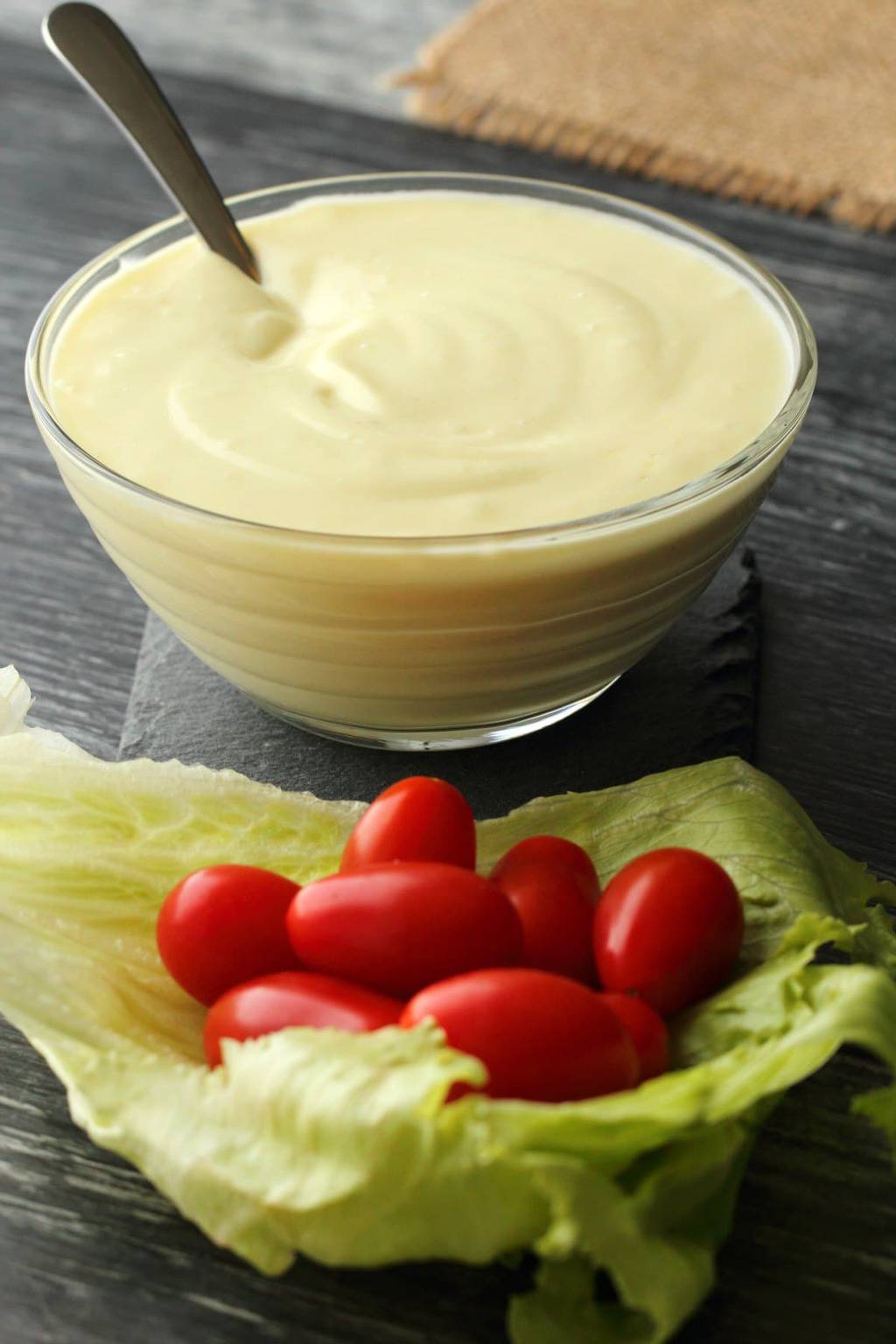 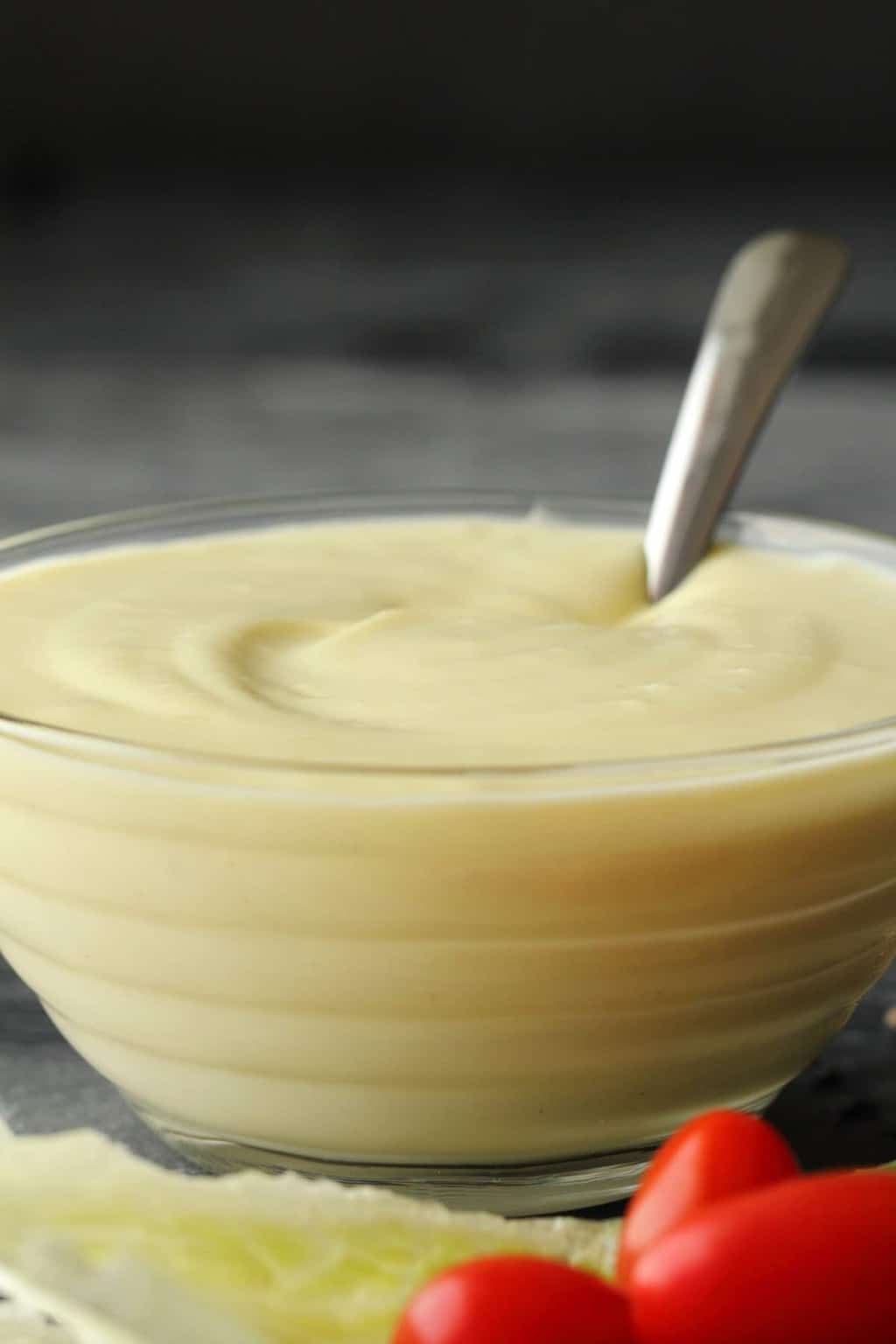 So let us know what you think of this vegan mayonnaise in the comments! Rate the recipe too please, it’s so helpful! Thank you.

Sign up to our email list for an awesome free recipe ebook with 10 fabulous dinner recipes and to stay updated with all our latest recipes posted to the blog. 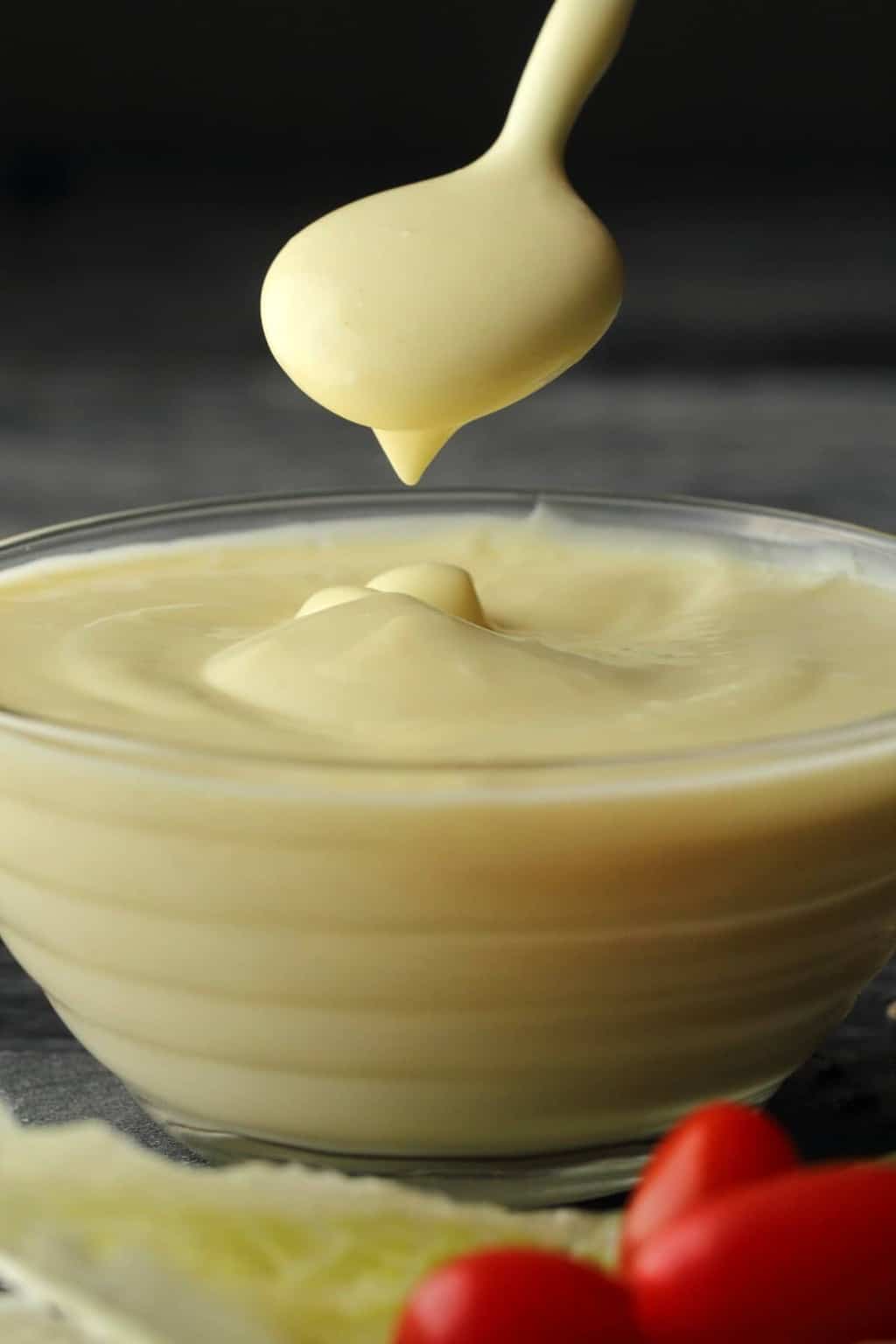 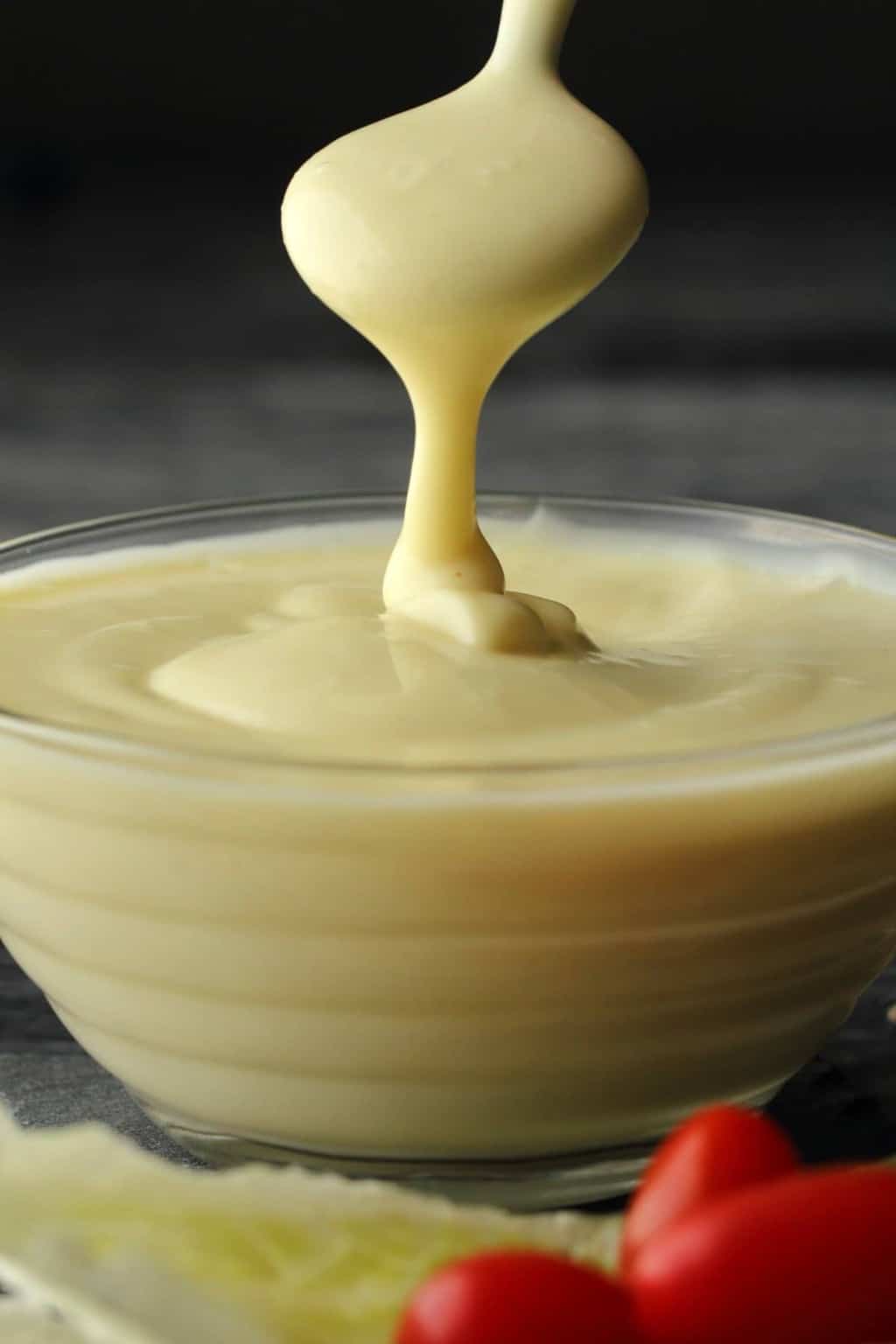 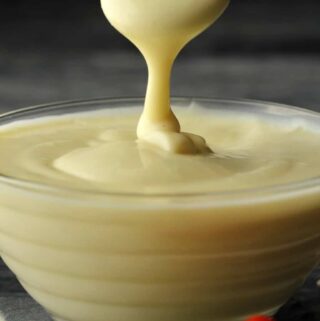