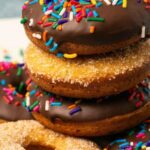 The best vegan donuts! Light and fluffy and SO easy to make. Serve them covered in chocolate and sprinkles or topped with cinnamon sugar!

I always thought donuts would be difficult to make but they’re crazy easy! They’re so easy you’re going to be wanting a permanent supply of these on hand.

They bake in 15 minutes and taste just as good as a bakery.

When they’re baked, you can decide how you want to top them. We have instructions for cinnamon sugar donuts and chocolate topped donuts.

And if you love donuts, check out our vegan chocolate donuts too.

How To Make Vegan Donuts

This is just a summary of the process, full instructions and measurements are in the recipe card at the bottom of the post.

While fried donuts are great of course, what’s nice about these baked donuts is that they’re much lighter.

They’re also super easy and I suspect (I haven’t tried a homemade fried donuts version yet) that they’re much easier to make than the fried variety.

How do you know your donuts are cooked?

They should be lightly browned on top and a toothpick inserted into the center of one of the donuts should come out clean.

Can you make these donuts gluten free?

These donuts are best when served fresh. But they can also be stored covered at room temperature for a couple of days or in the fridge for up to a week.

If you make them with chocolate on top and the weather is warm then the fridge will be the best place to store them so the chocolate doesn’t melt.

They are also freezer friendly for a couple of months. Let them thaw overnight in the fridge and warm for a few seconds in the microwave before enjoying. 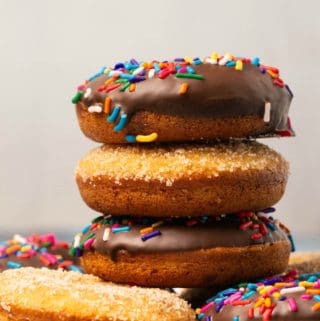