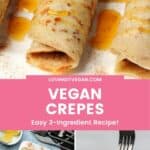 These delicious vegan crepes are so simple with only 3-ingredients. Served with cinnamon sugar, lemon juice and maple syrup they’re the best thing ever! 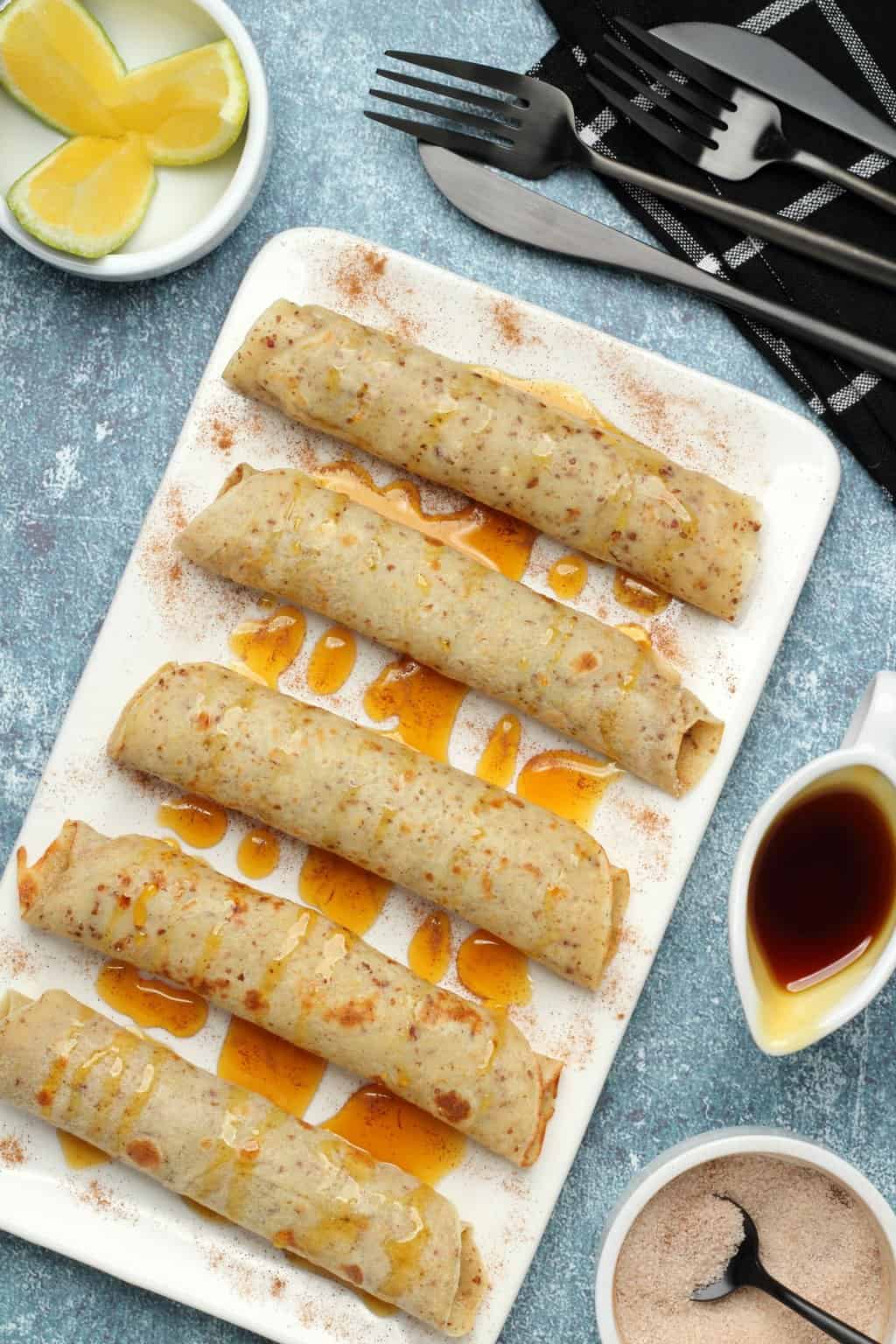 These vegan crepes are the easiest crepes you’ll ever make. Why? Well, they only have 3 ingredients.

And really, those 3 ingredients are all that is needed, because these crepes are gorgeous. 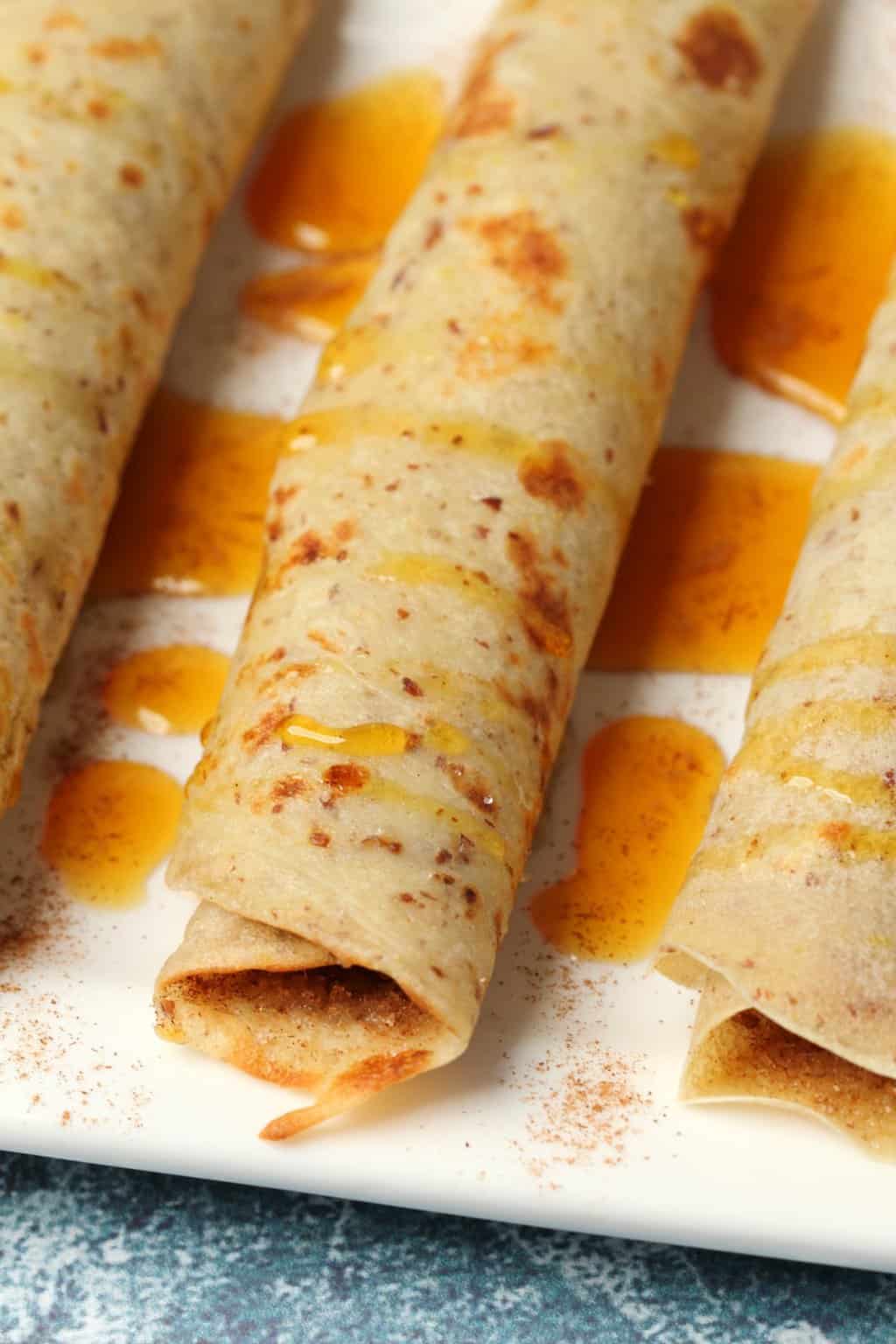 How To Make Vegan Crepes

So it’s just ridiculously easy to make this recipe.

Prepare your flax egg by mixing some ground flaxseed meal with some hot water and allowing it to sit until it becomes gloopy.

Then you sift some flour into a mixing bowl and add soy milk and the flax egg. Mix it in nicely, you can use a hand whisk as well to remove any lumps and your batter is ready. 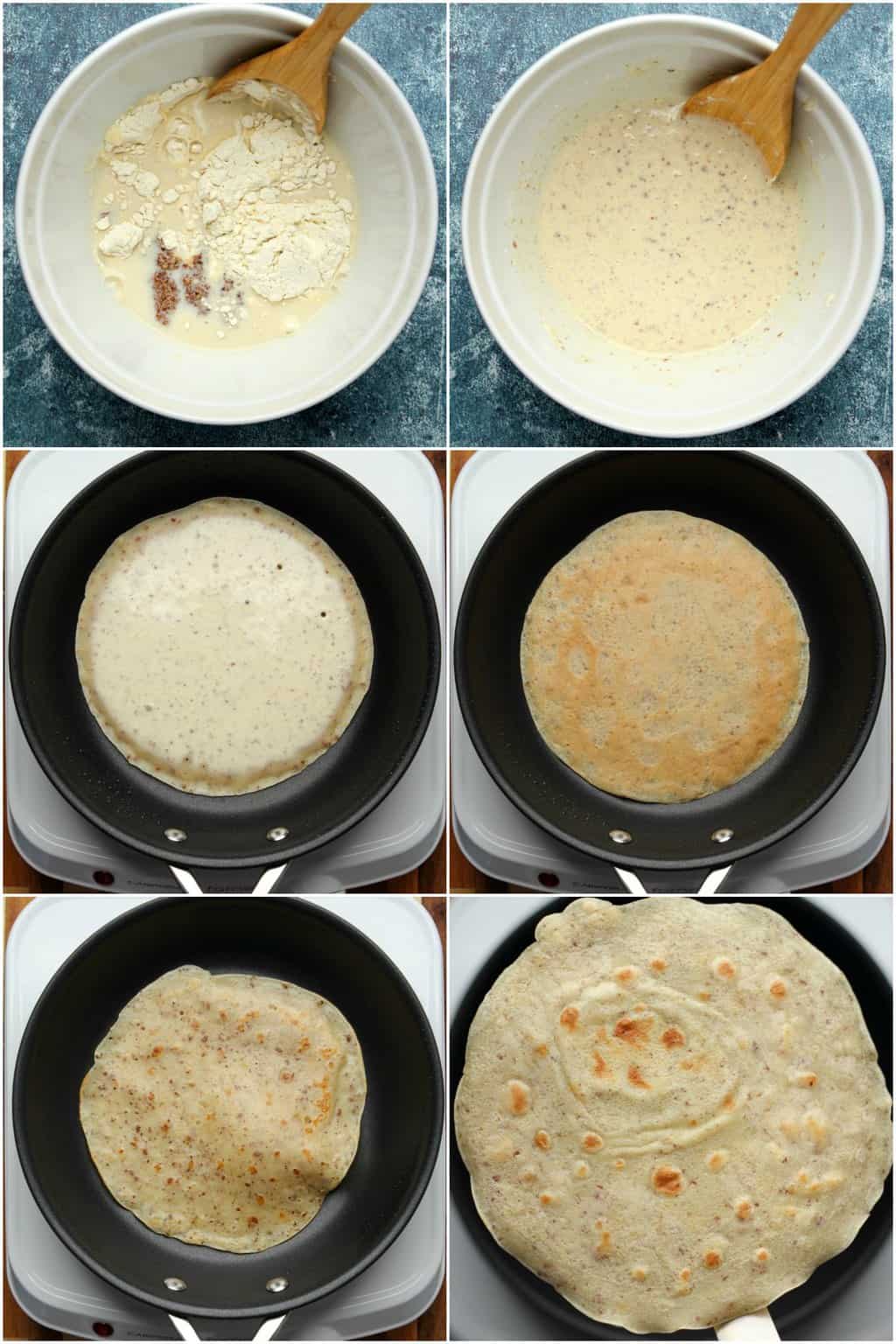 Place a little oil into a pan, pour out some of the crepe mix and swirl it around the pan. You want it to be quite thin.

Let it cook until it starts to look quite dry on top and there is barely any wet batter, then flip it and let it get browned on both sides.

Repeat with the next crepe. You’re aiming to get 5-6 crepes out of the batch. If you’d like more, you can always double the batch since this is an easy recipe to increase. 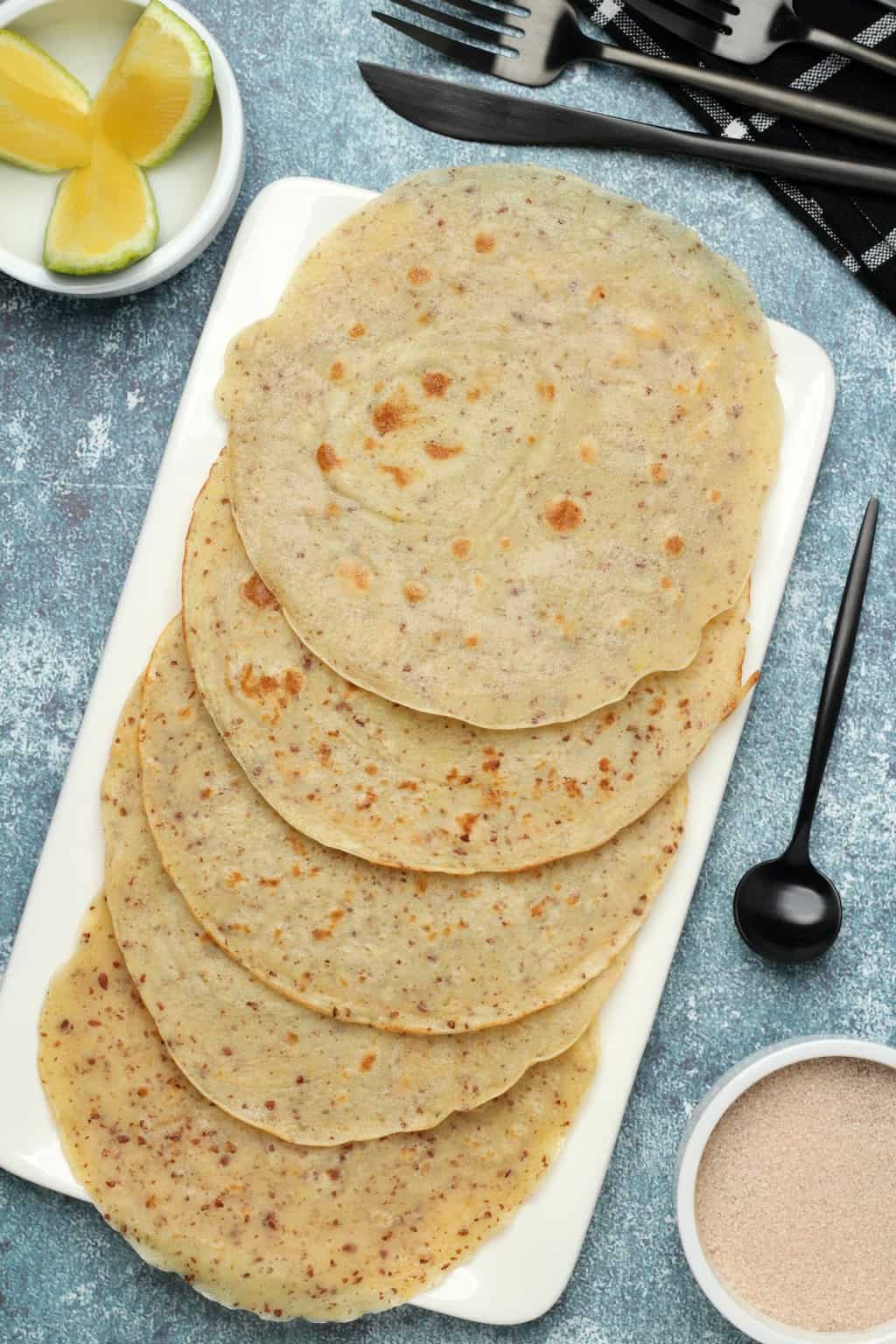 How To Serve Vegan Crepes

Sprinkle on some cinnamon and sugar, squeeze on some fresh lemon juice, roll them up and then drizzle with some syrup. This is my favorite way to serve these crepes.

To make your cinnamon sugar mix, just mix together around ¼ cup (50g) of sugar with 1 tsp of ground cinnamon. You don’t need as much cinnamon as sugar.

They can also be served as savory crepes. Since there is no sugar in the actual crepe recipe, they can go either way. If you want to stuff them with a savory sauce or veggies, this will work great too. 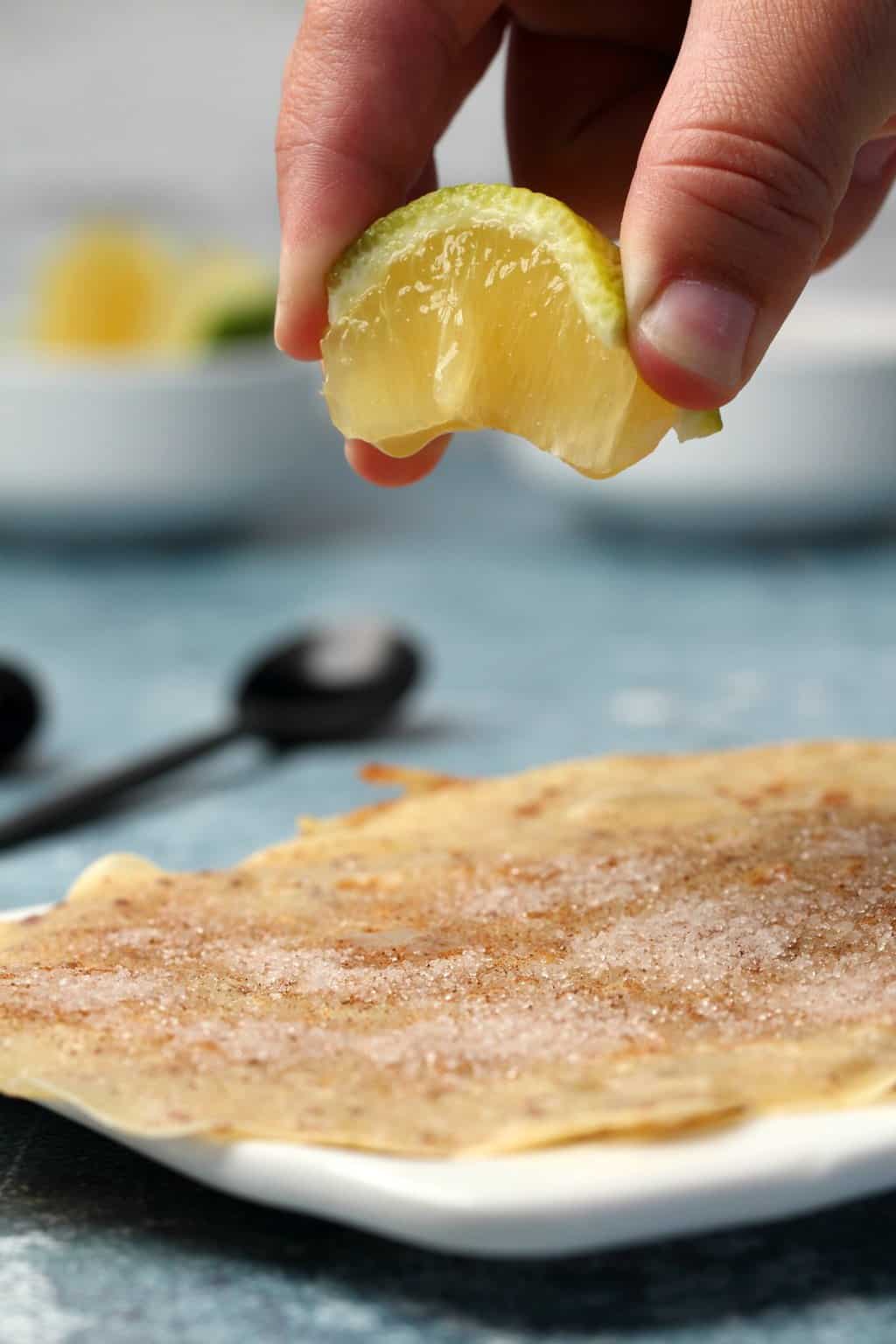 Your batter needs to be quite thin, you need to be able to pour in the batter and then instantly swirl it around the pan so that it spreads out into a thin crepe (as pictured).

The best way to ensure accurate results is to weigh your flour so that you definitely have the right amount. That way you should get the right consistency for your batter.

If you don’t have a food scale, then make sure you use the spoon and level method for measuring flour which is the accurate method when using only cups.

If you have accidentally used too much flour, then all is not lost, just add in a little more soy milk to get the right consistency.

You need to flip the crepe at the right time. You want to wait until all the wet batter has been absorbed. If you flip it too early, that’s when it’ll break and fold over itself and you’ll have some sort of a freakish calzone crepe thing going on.

As soon as both sides are lightly browned, it’s ready to go.

We used soy milk in this recipe, but almond milk will also work fine. I would be less keen to use thicker milks like canned coconut milk or a thick cashew milk. These may cause the batter to be too thick.

So make sure the milk you use is a fairly thin consistency like soy milk is and then it should be fine. 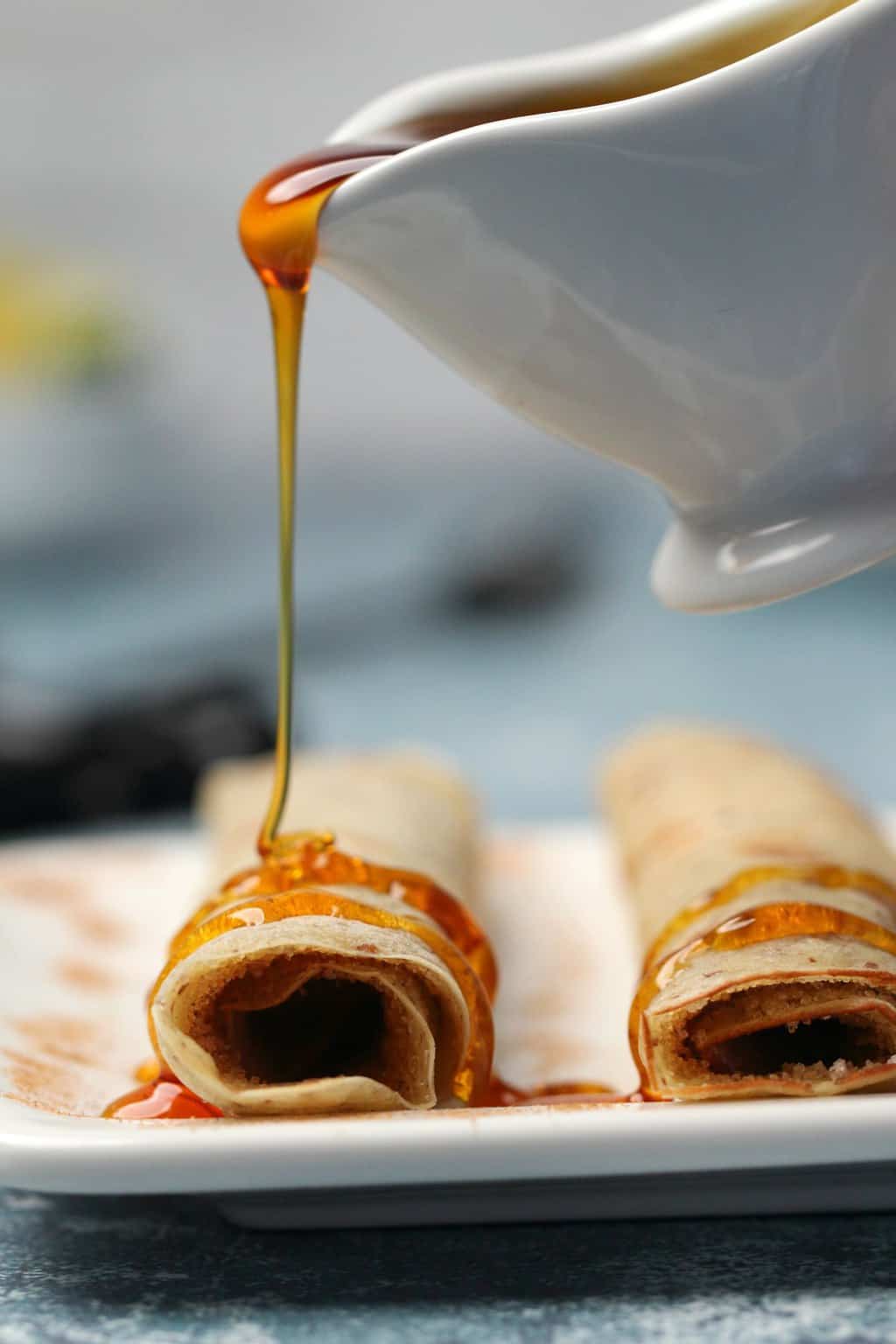 Can You Make These Crepes Gluten-Free?

If you’d like to try a gluten-free version, then a gluten-free all purpose flour blend is going to be the best one to try. Something like Bob’s Red Mill 1 to 1 Baking Flour would likely work well.

Don’t try this recipe with a single type of flour like coconut flour or almond flour as that will not work.

These crepes are at their best when warm and freshly made, though leftovers can be kept in the fridge for up to 5 days. Reheat in a pan until warmed through. 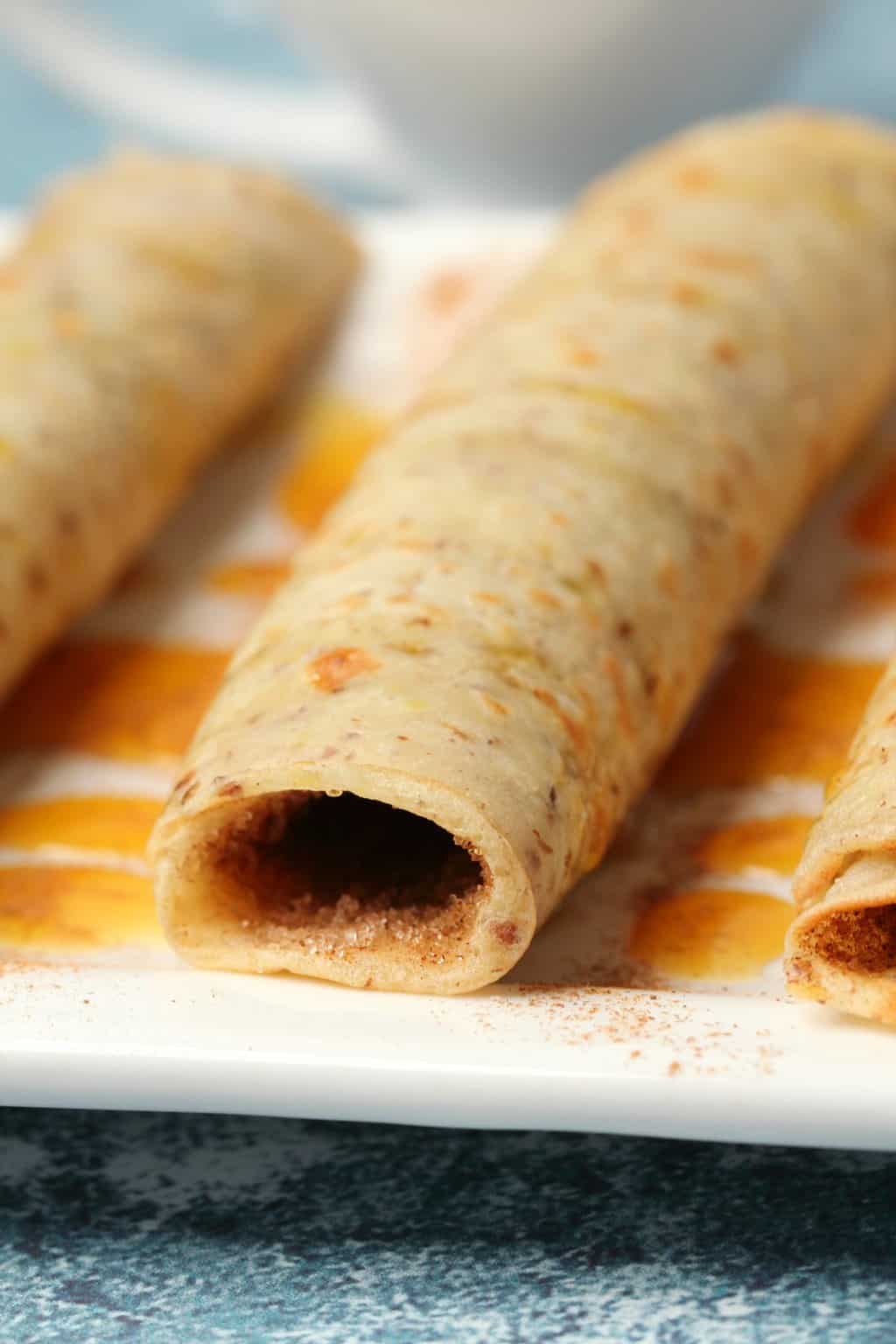 Isn’t it wonderful when a recipe doubles as breakfast or dessert? We think so!

So let us know what you think of these vegan crepes in the comments and please rate the recipe too! Thank you! 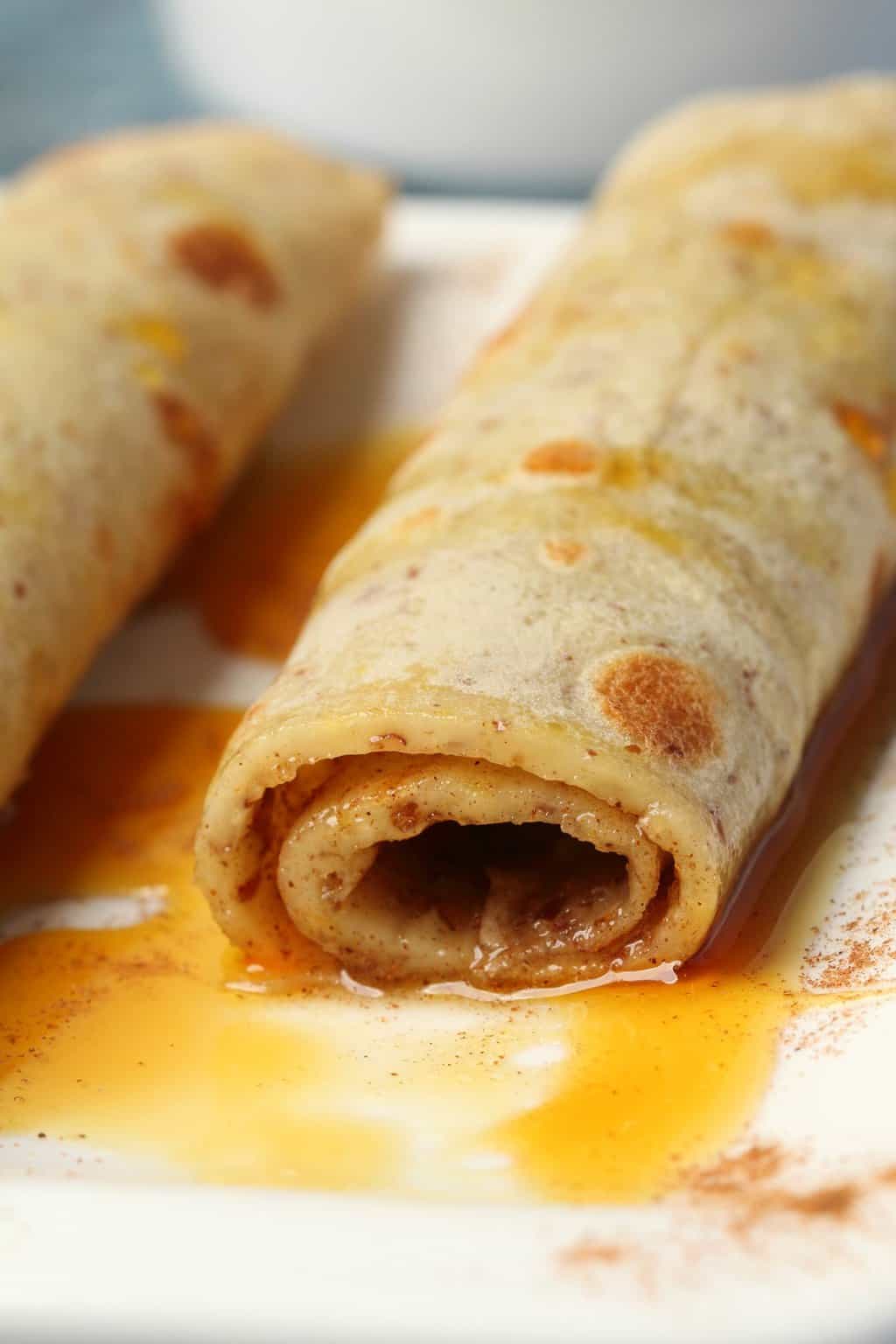 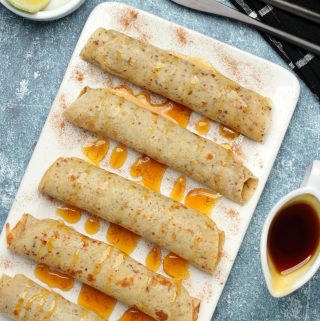