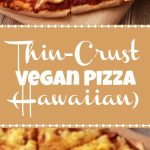 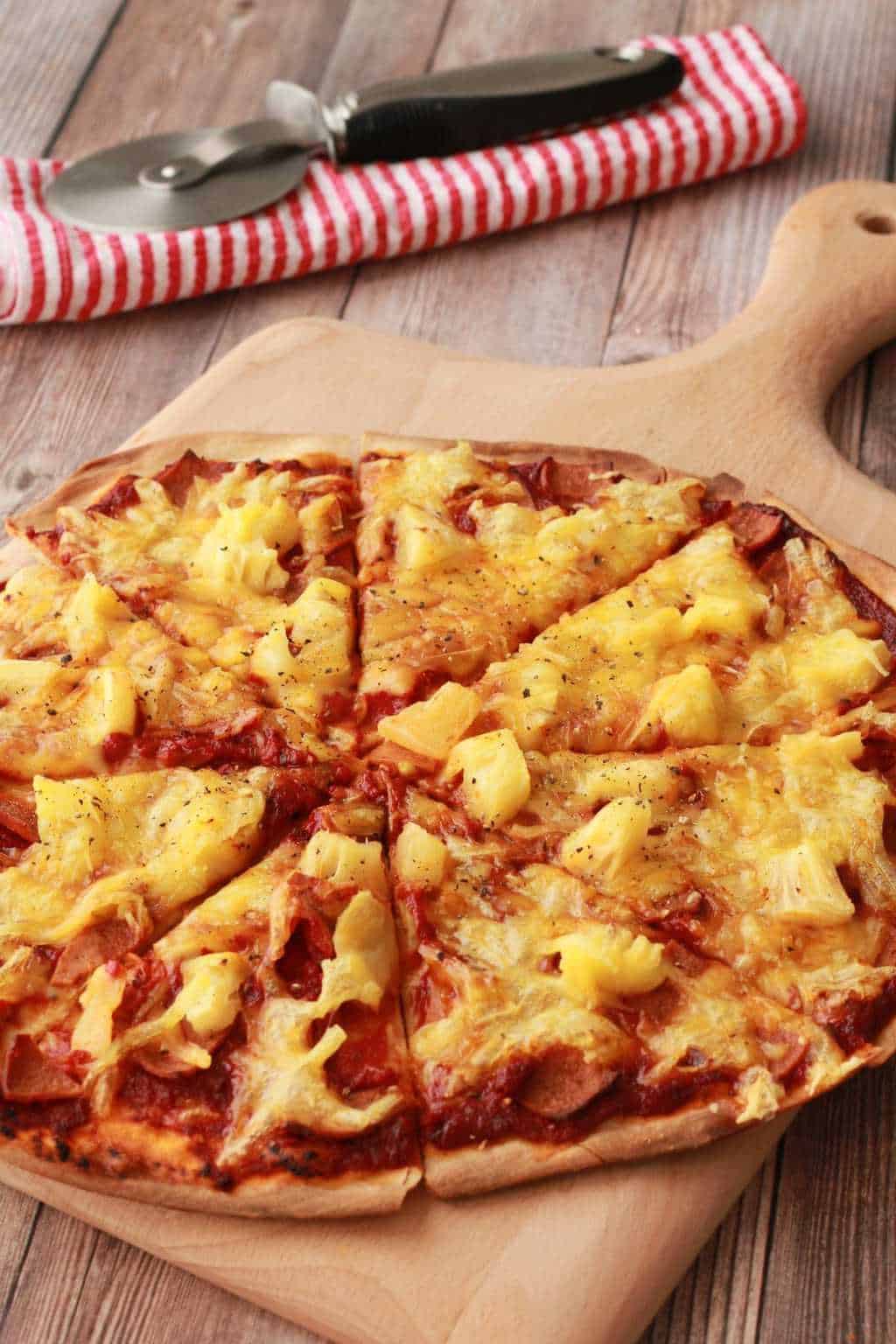 For the first 10 years of my life I lived in a tiny little village. There were no restaurants in town. There was one takeaway that was owned by my parents for a brief stint and it did toasted sandwiches and burgers and that sort of thing. Not pizzas.

There were definitely no pizza joints in town.

So I don’t think I even knew pizza existed until well into my teens. We had moved into the ‘big city’ by then. And I put that in quotes because it was a very small city. More like a bigger small town.

Yep, I’m from small town South Africa. And by the time I knew pizzas existed I was also heavily into starving myself to be thin, so I don’t think much of that passed my lips.

But as an adult I discovered a deep love for pizza. I was still starving myself well into my 20’s and even into my 30’s (sooo not fun!) but now what I did was eat pizza a couple of times a year! Like special occasions only! How sad.

Then I went vegan and discovered the hard truth that not a lot of places know how to make a pizza taste good if it doesn’t have ten tons of cheese on it!

And vegan cheese? Forget about it. Most places don’t know it exists, or don’t care.

So you end up paying exorbitant prices for a dry crust with far too little tomato sauce, and some extremely sparse toppings dotted around. It’s a crying shame.

NOT if you make it yourself though! Then you get to make the best tasting pizzas and pile on the toppings! And you can include vegan cheese if you live somewhere where it’s easily available, but if you don’t, no worries. You just pile on the other toppings and make up some cashew cheese to drizzle on top! And seriously there is a strong case to be made for using cashew cheese anyway – damn that stuff is good!

And starving to be thin? Can kiss my (body positive, feminist) ass.

Bring on the homemade pizzas. On the regular! 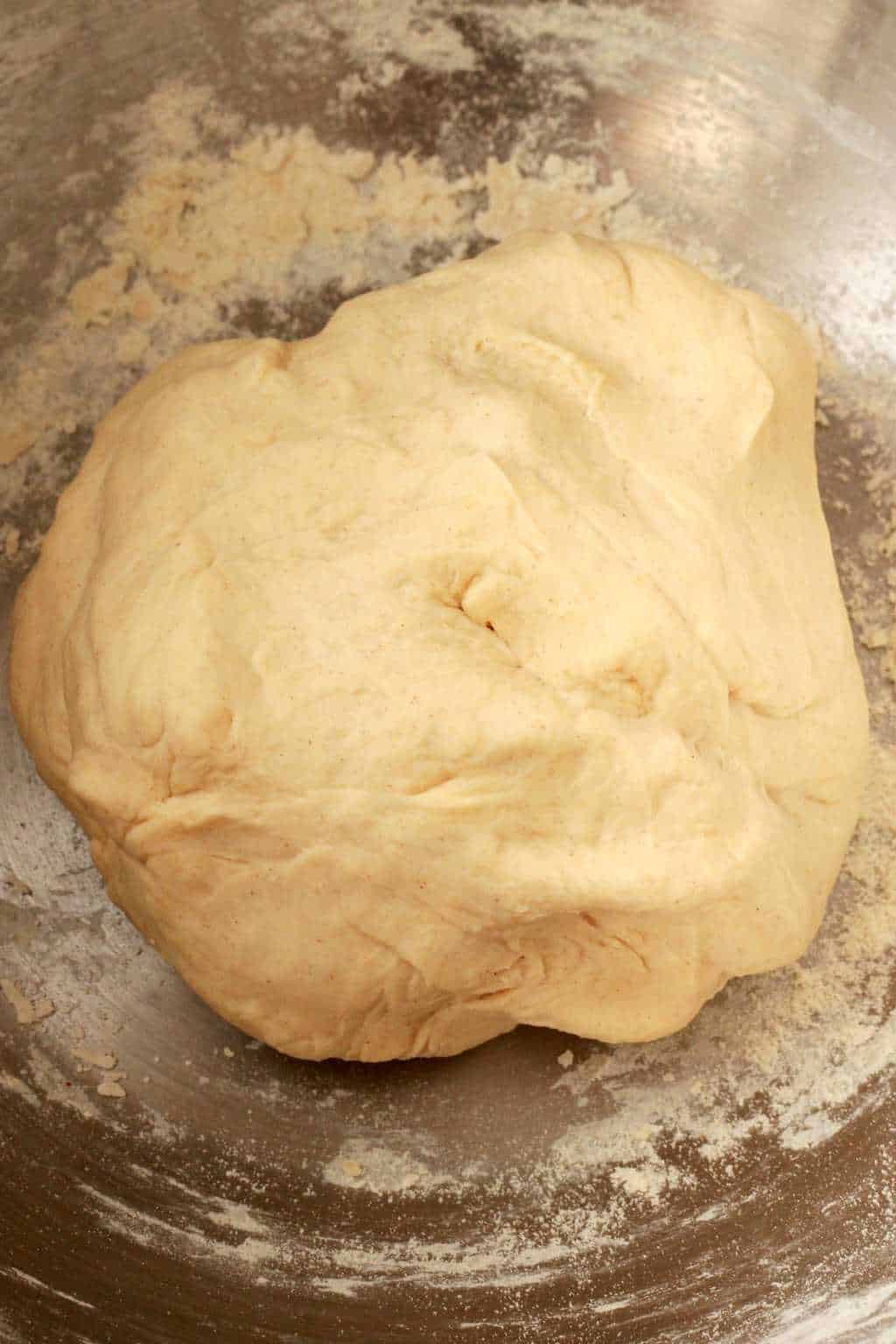 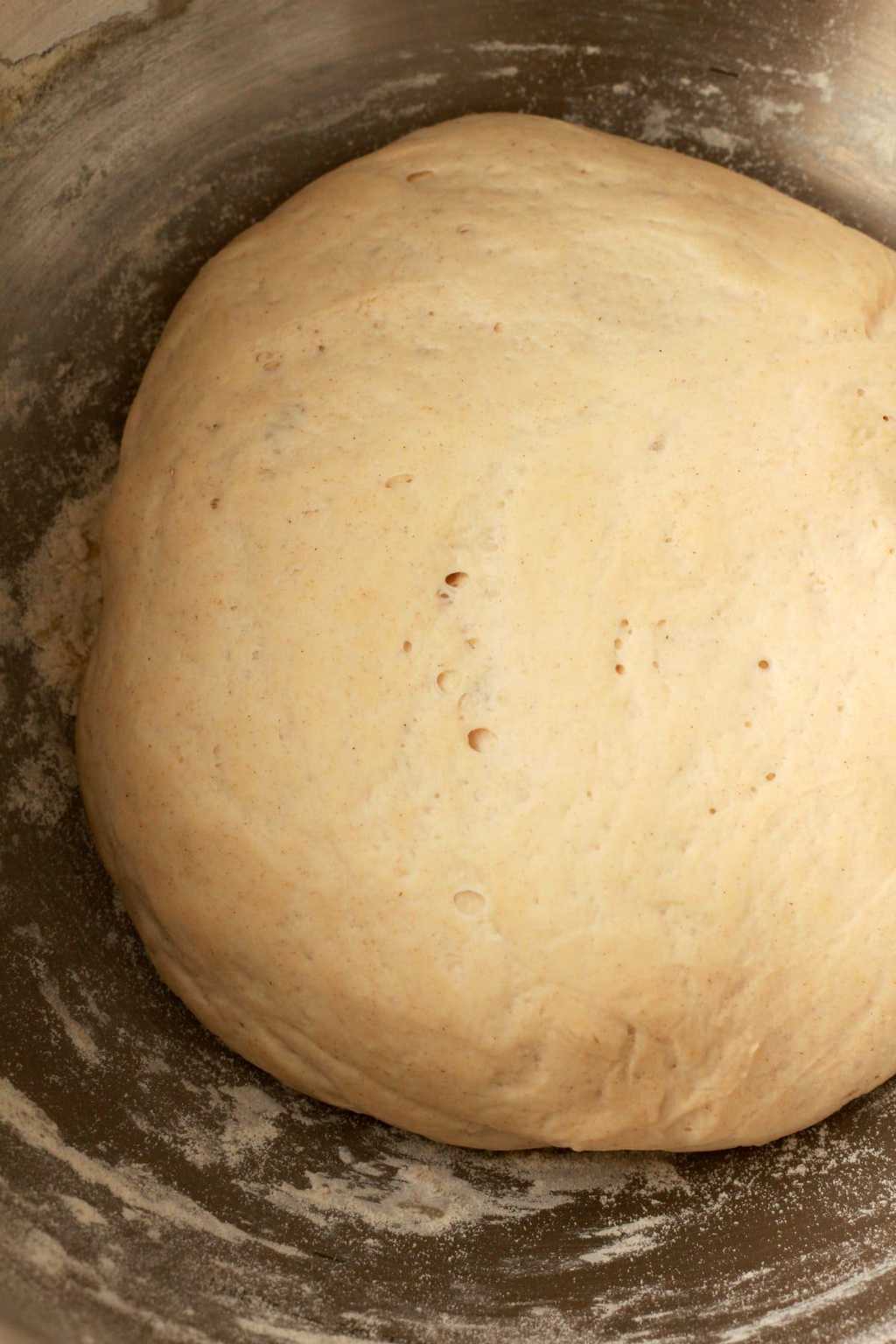 I can absolutely confirm that this vegan pizza is better than any I’ve had in a restaurant. It is a crispy thin-crust delicious pizza base made up from scratch. The tomato sauce is piled on thick and then you can top it with whatever you like!

In this instance I wanted to make a Hawaiian pizza so the toppings were pineapple, vegan bologna (for the ‘ham’) and topped with vegan cheese. 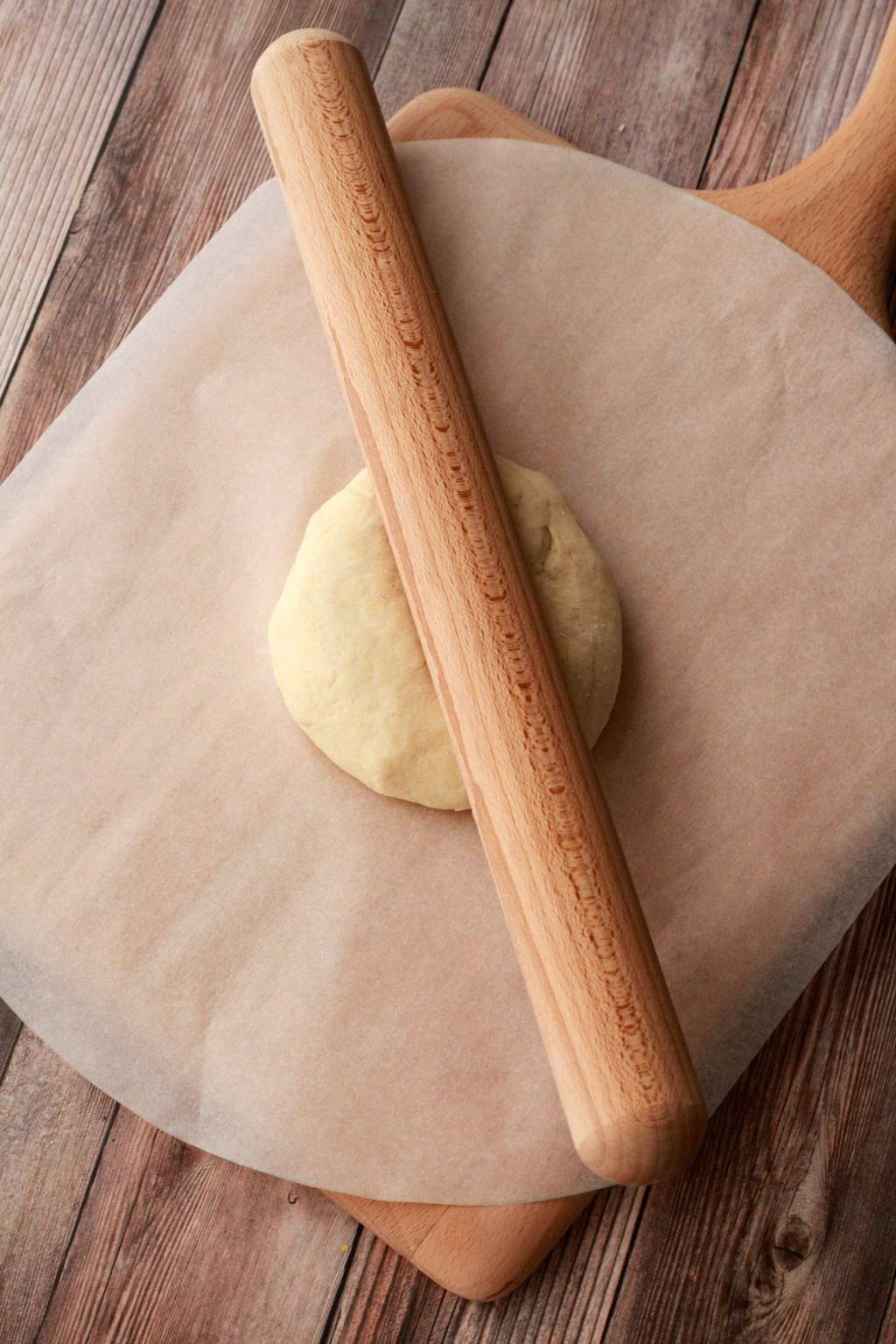 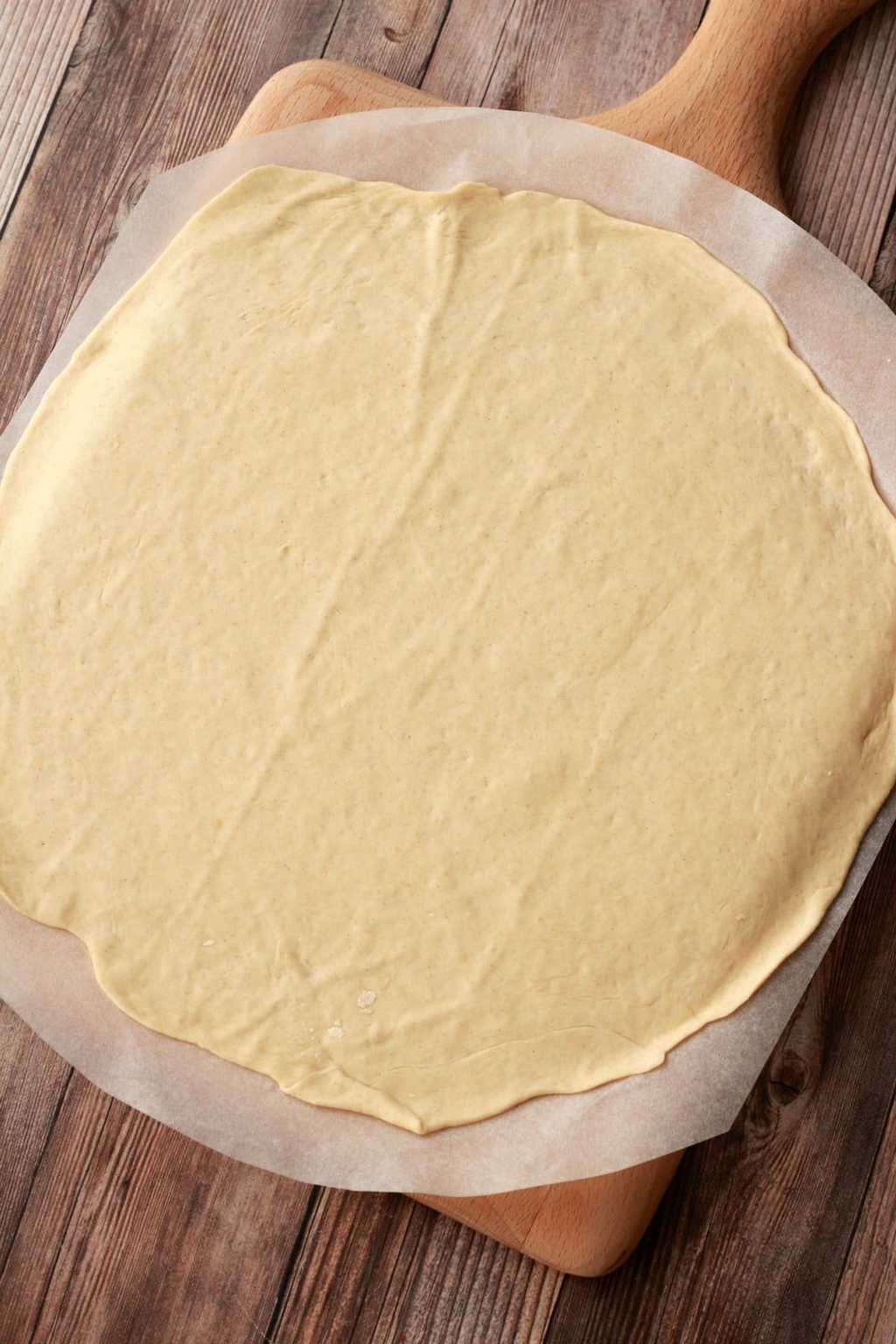 One thing you absolutely DO need before you can make these vegan pizzas is a pizza stone. It’s the crucial ingredient. Believe me – I tried making pizzas without one – not good. Not good at all. The one we use is the round pizza stone made by Ceramic Chef (not an affiliate link).  It’s an awesome pizza stone and we’re loving it.

A pizza stone heats up in the oven from cold, so you don’t preheat the oven first, you just put the pizza stone into a cold oven and then you crank up the heat and heat up the oven and pizza stone together for around an hour.

While the pizza stone is heating, your dough is rising. Preparing your dough is an easy 10 minute job. You just mix flour, instant yeast, salt and warm water into a dough. And then you add flour liberally to stop the dough sticking to your hands while you knead the dough for around 5 minutes. Then you cover it and leave it to rise for an hour. So by the time the dough has risen, the pizza stone is blazing hot too.

Then you divide the dough into two equal sized balls. Roll out the ball of dough on parchment paper (that you conveniently cut out to be the right size for the pizza stone before the stone went into the oven), put your toppings onto the rolled dough and then simply put the pizza with the parchment paper (no need to remove it) onto that blazing hot pizza stone. 8 minutes later you have super crispy thin-crust vegan pizza to enjoy. 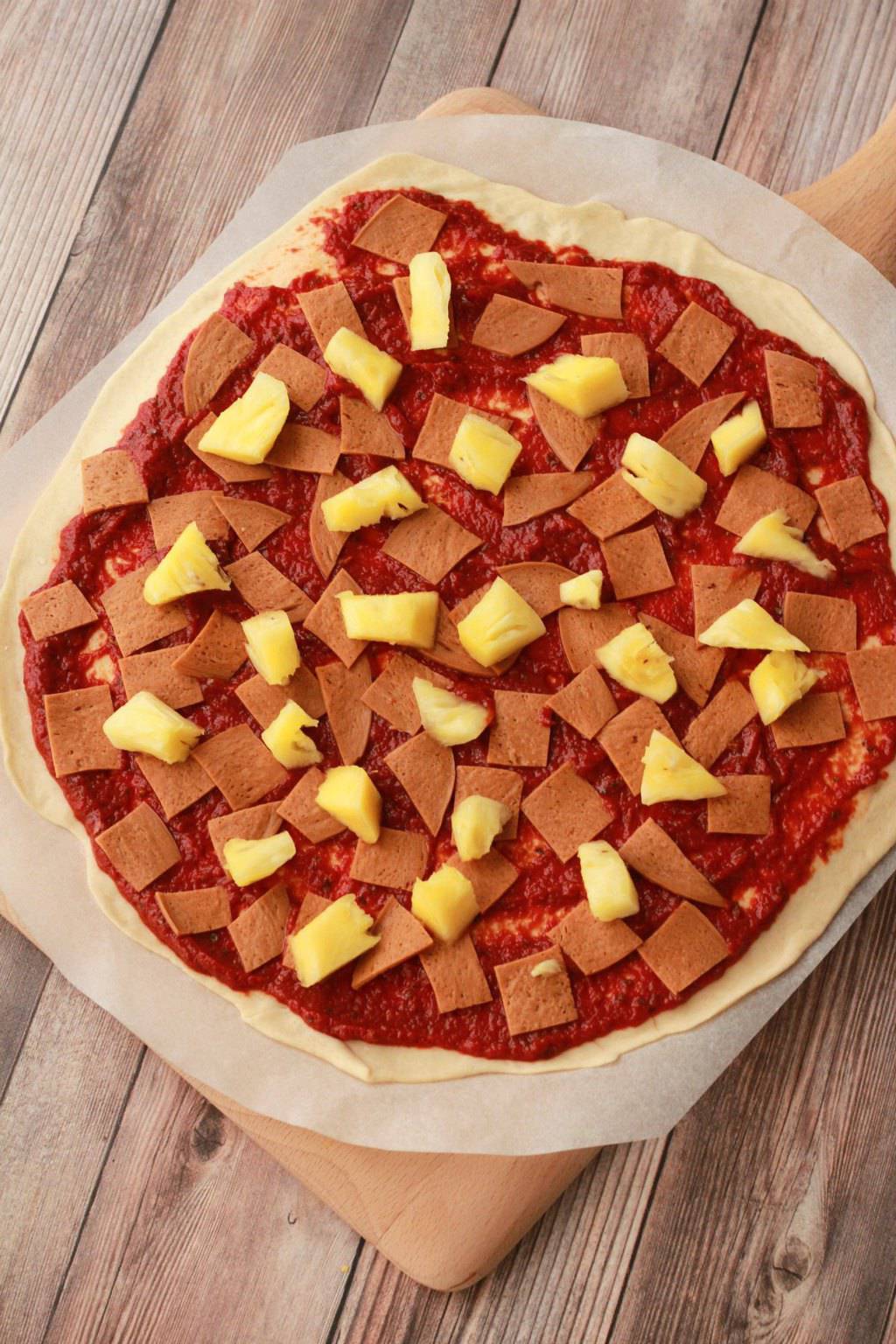 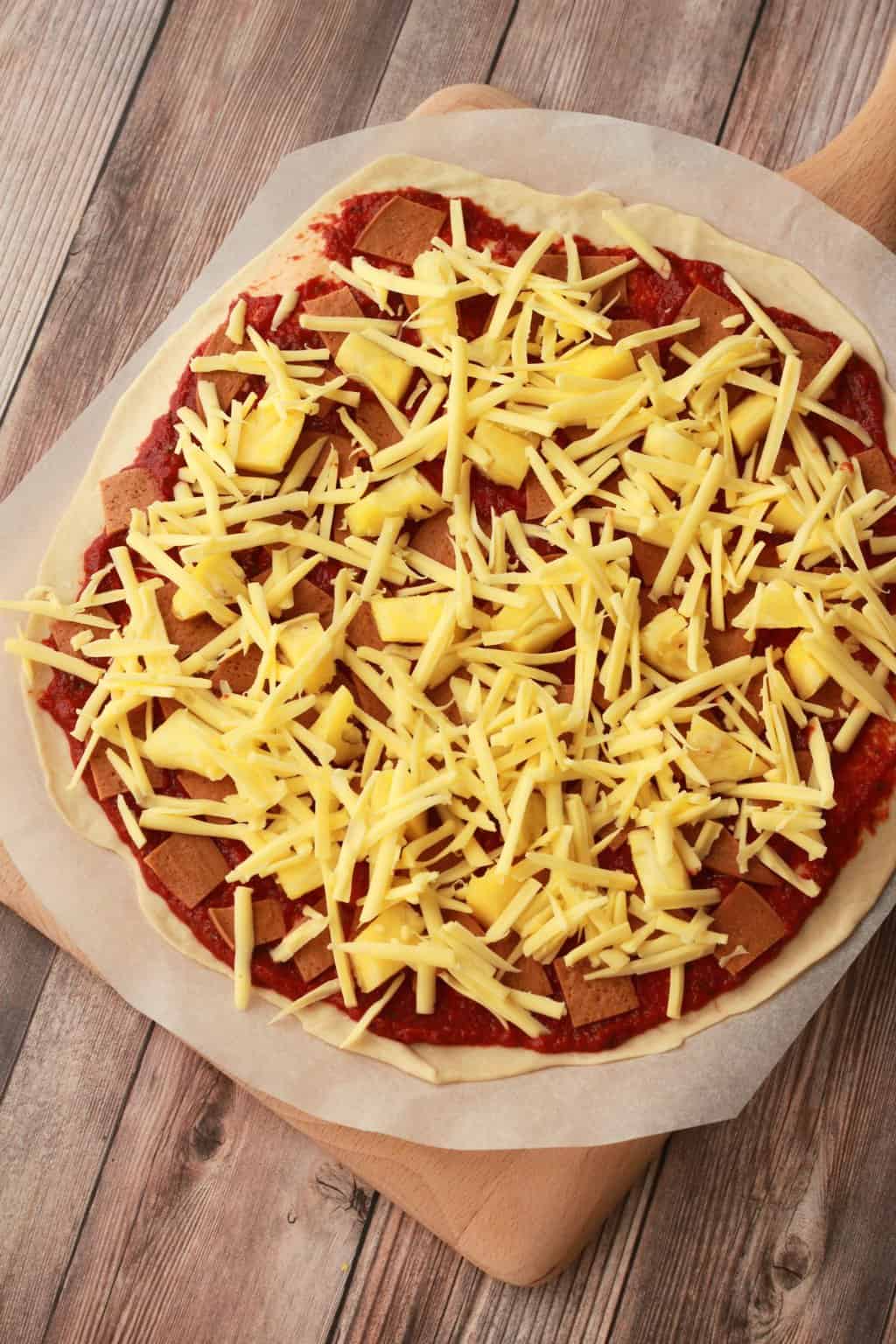 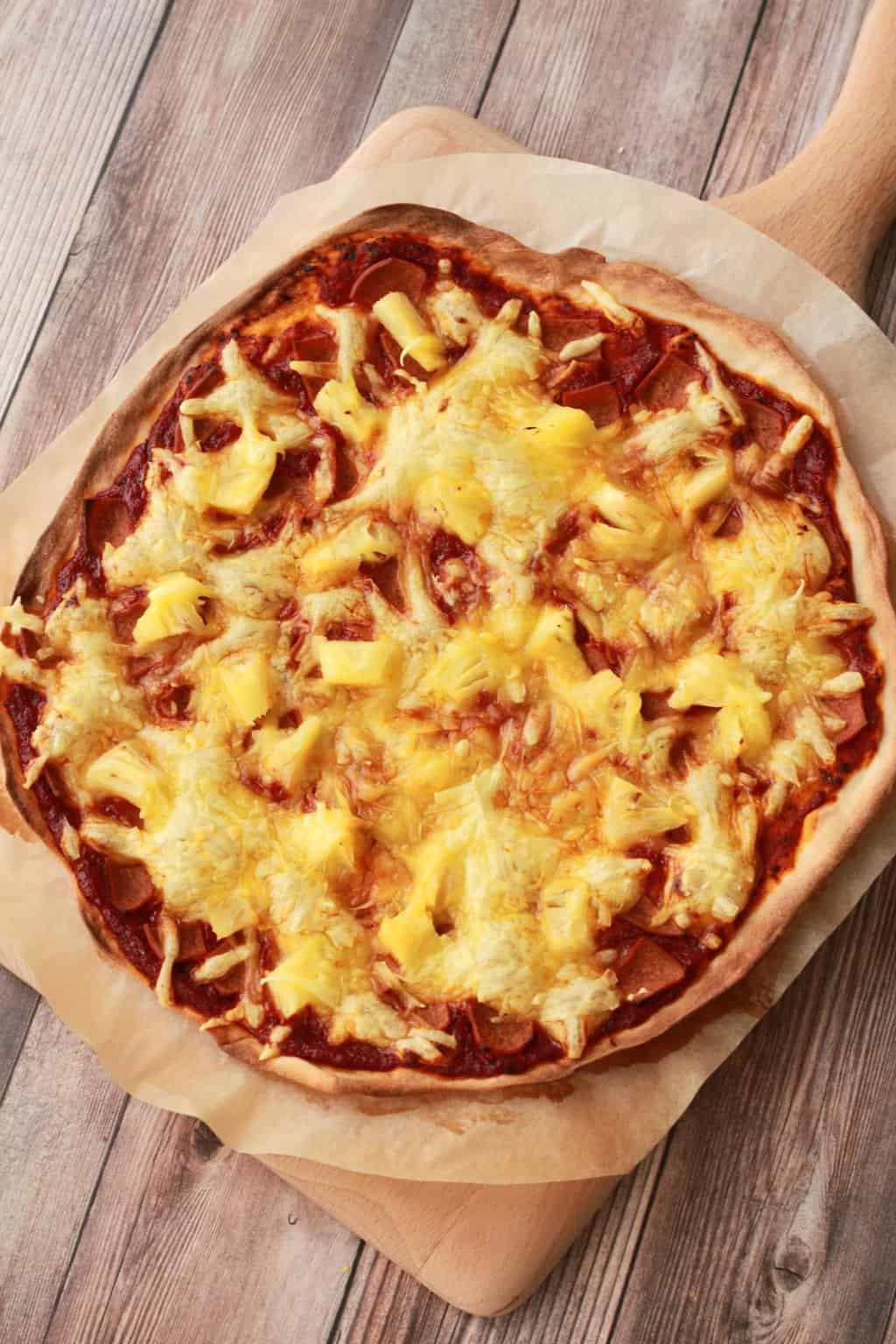 Keeping the pizza on the parchment paper makes it easy to get on and off the blazing hot pizza stone.

You have to be careful though as it’s all very hot! Wear some oven gloves for sure! 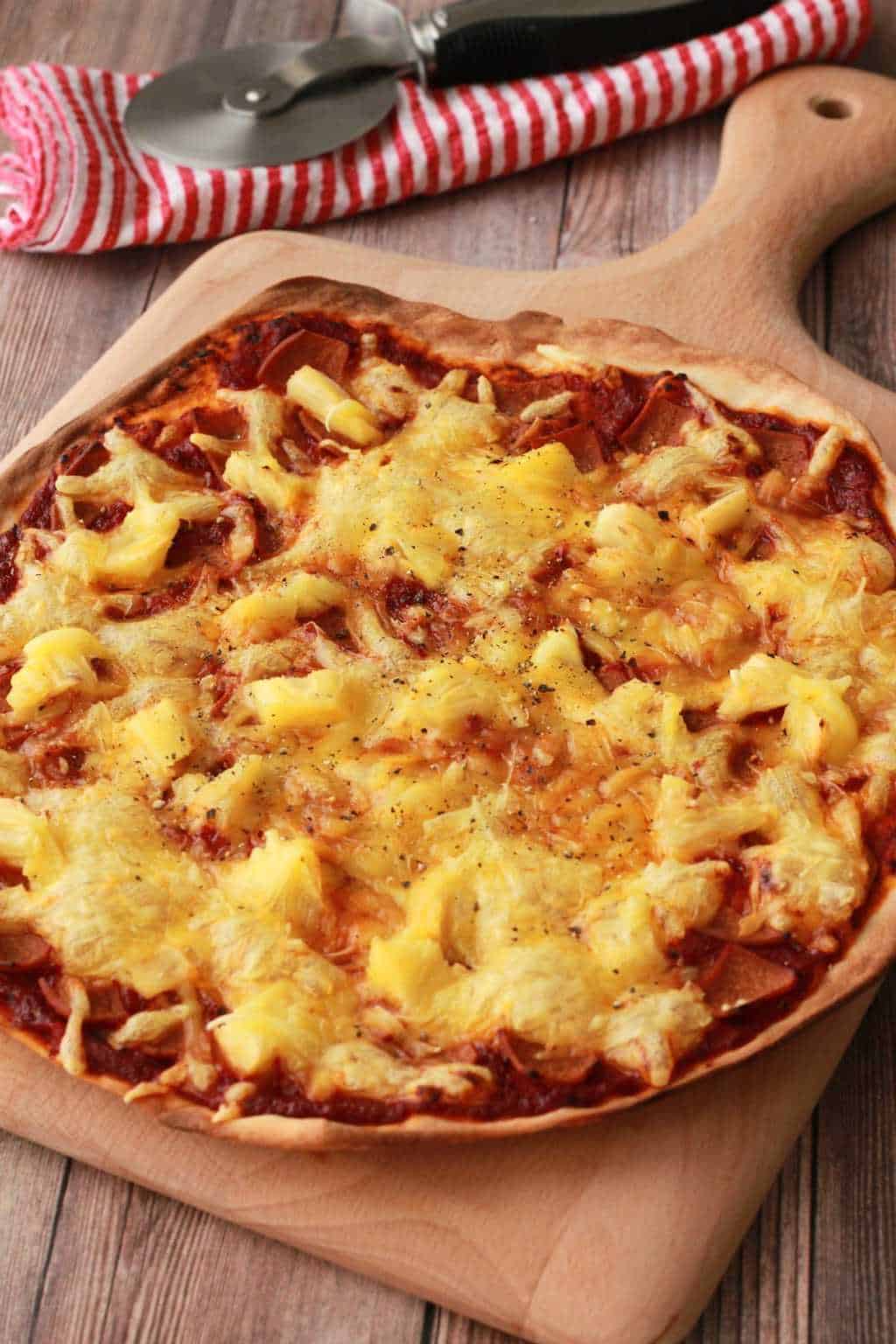 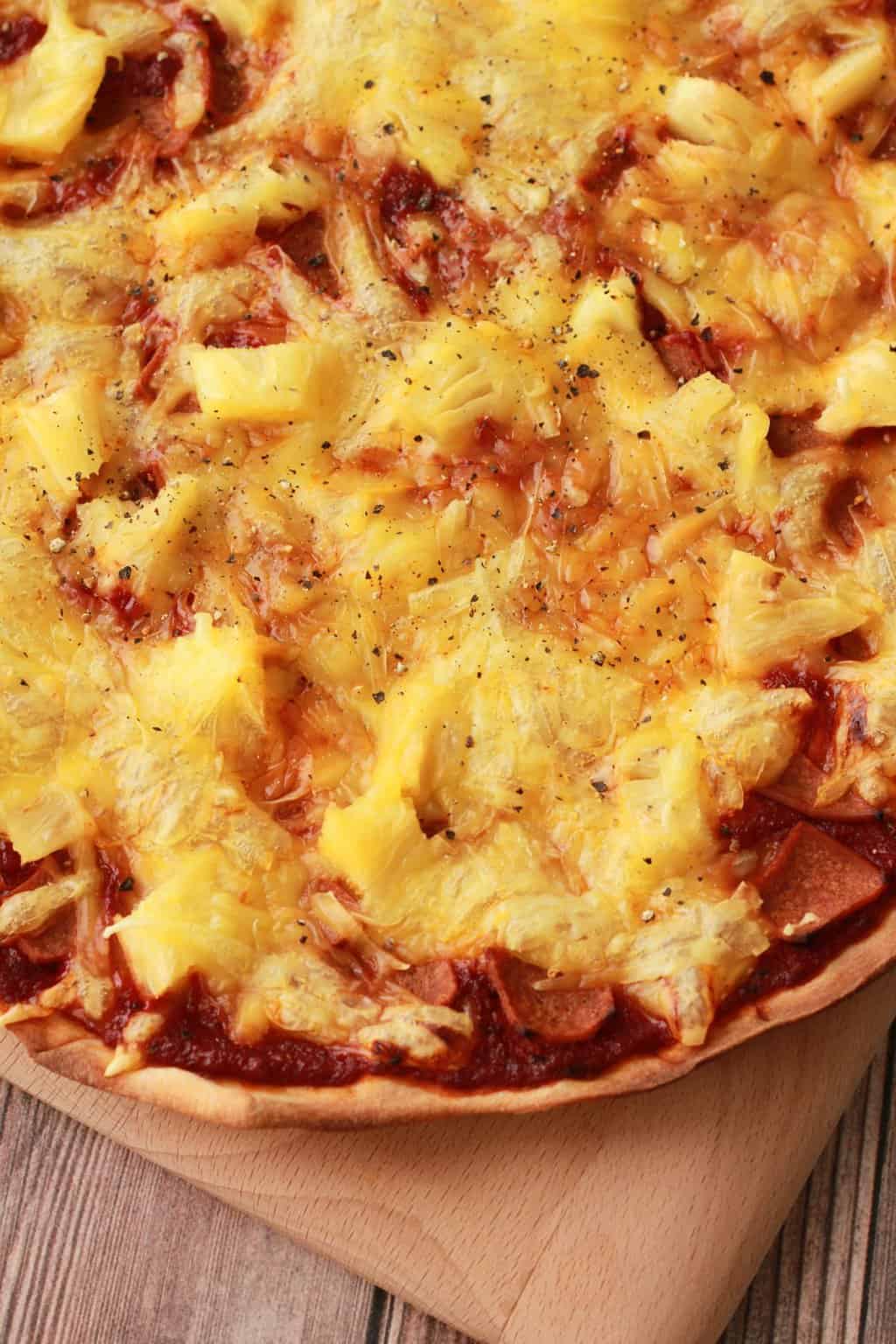 You have to be careful not to overcook the pizzas though. If the pizza stone is as blazing hot as it should be after an hour or more heating at full heat in the oven, then 8 minutes is the perfect length of time.

But you’ll be able to see that it’s ready, because the toppings will be melted and the edges of the pizza will be crispy.

After 8 minutes you can just open the oven and use a spatula to lift the pizza slightly and take a look. It will be lightly browned on the bottom when it’s cooked.

If you overcook it by a couple of minutes, the result is a slightly chewy texture. So when you end up with chewy, you know it’s overcooked, not undercooked. Chewy is not awful, it’s perfectly edible, but it’s preferable to not give your jaw such a workout and get the pizza out at the exact right moment.

If you go with one regular crust pizza instead of two thin-crust pizzas, then you’ll need to cook that baby for around 12-15 minutes on its own. 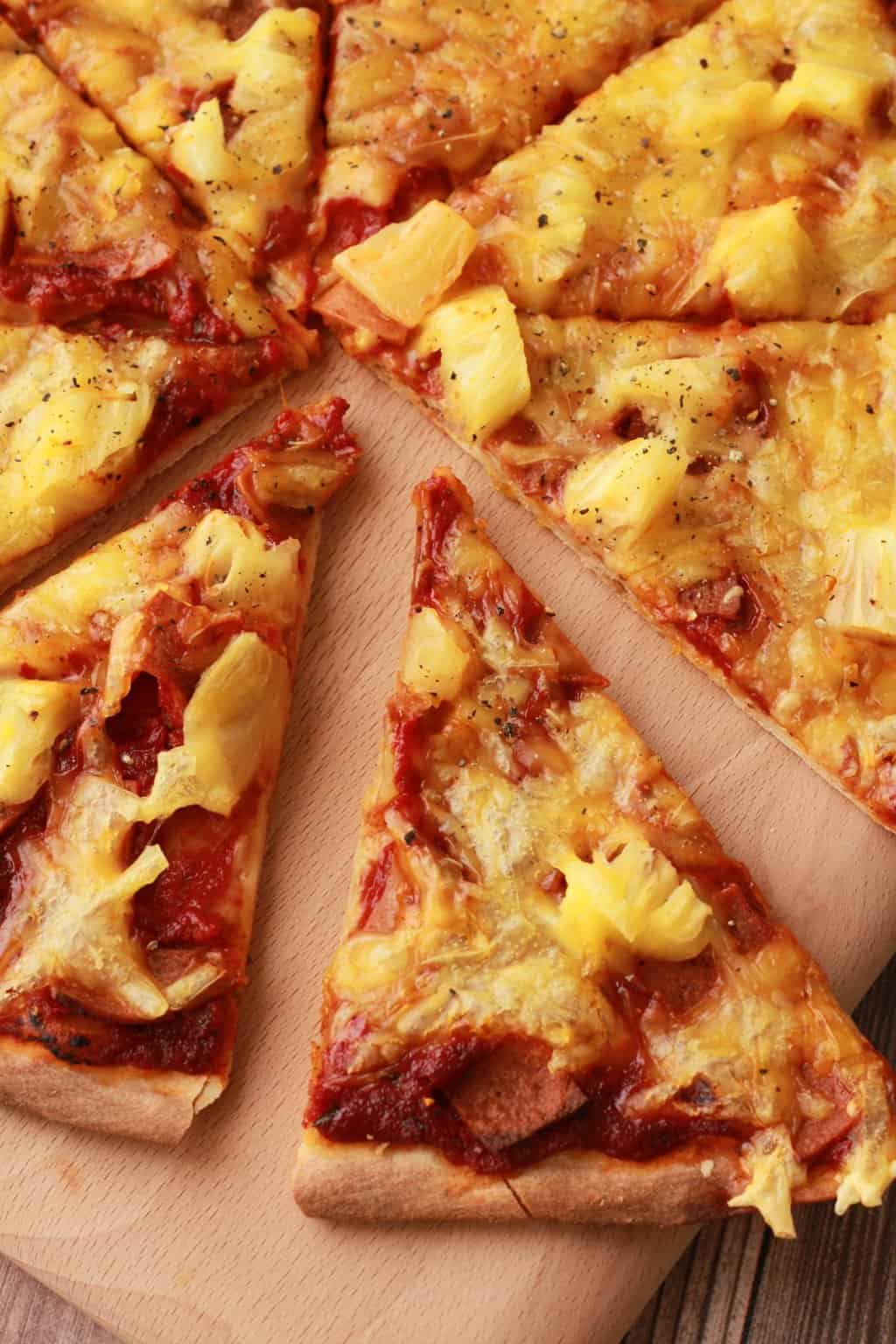 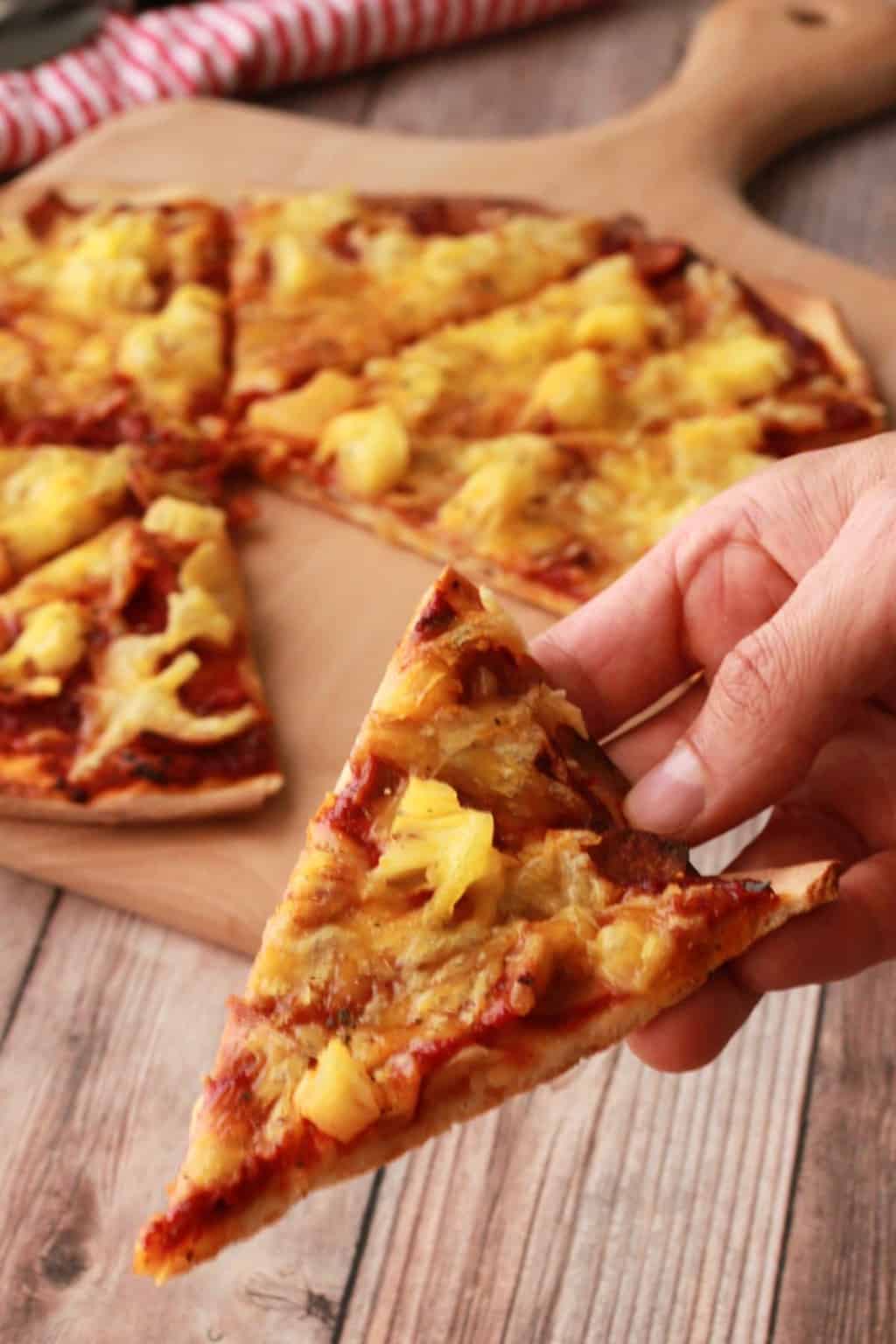 You will love this homemade vegan pizza, it is:

You’ll never have to miss good pizza again – make it a weekend staple! 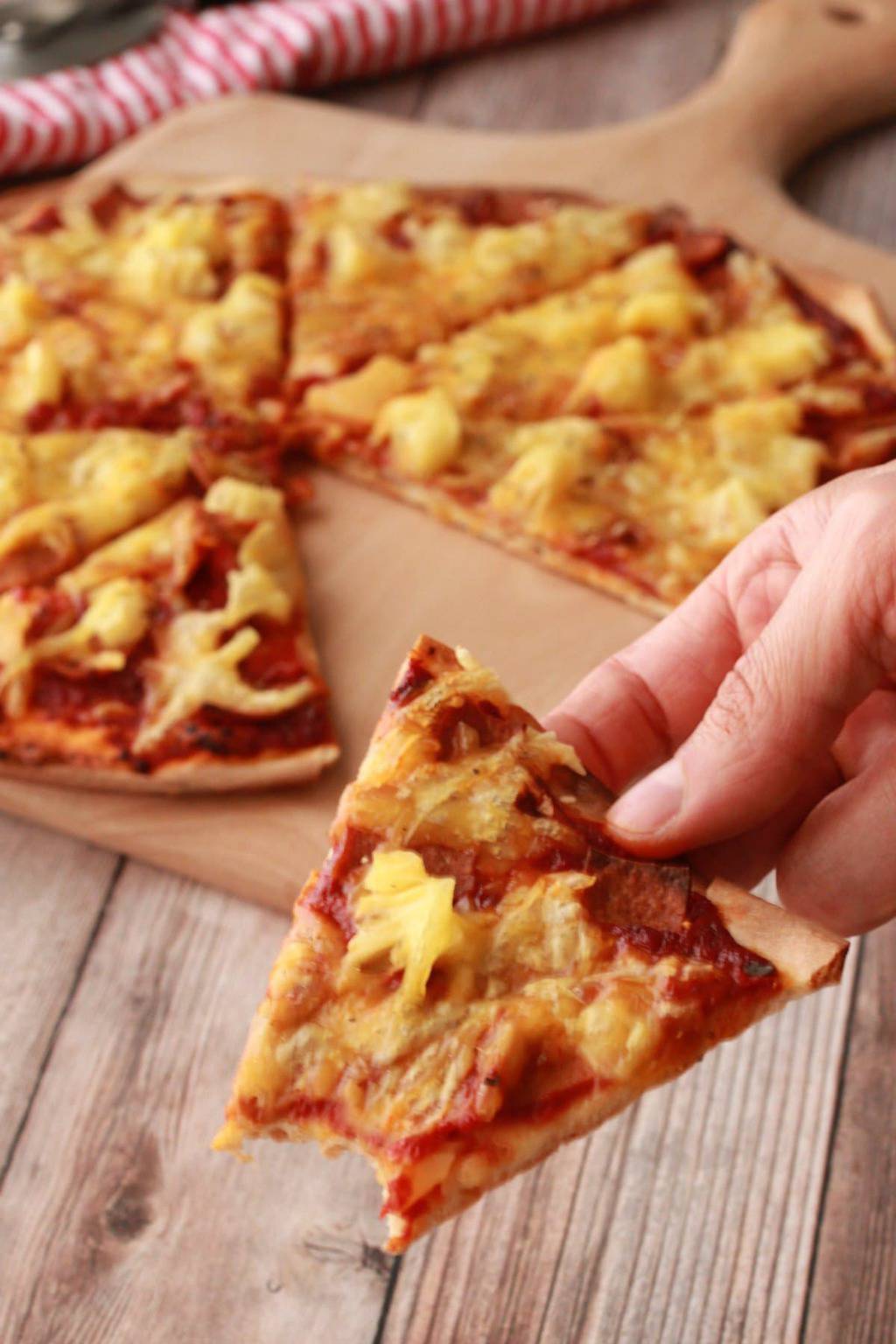 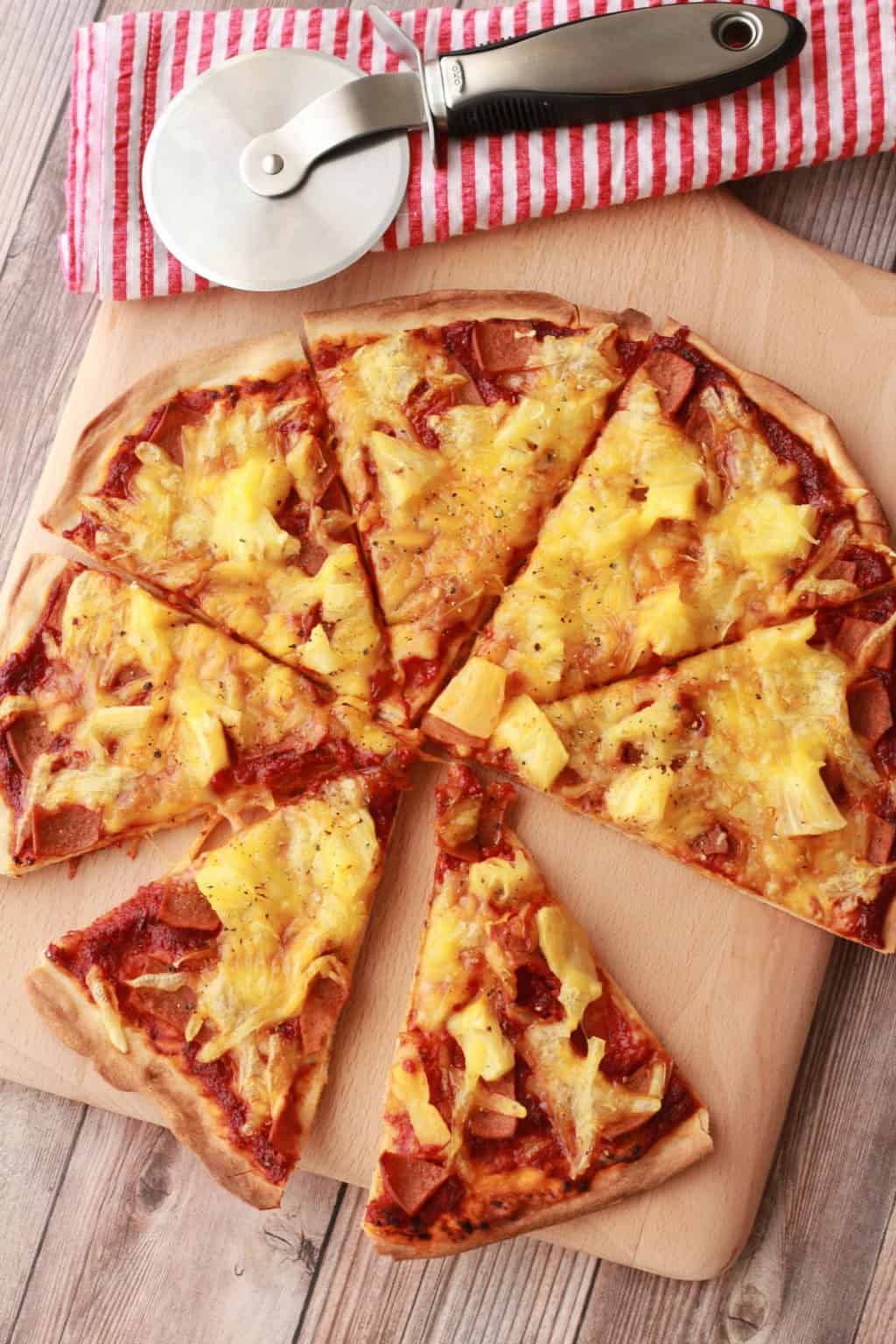 Let me know what you think of this vegan pizza recipe! If you have any questions post them down below.

And for some more ideas on what to top your pizza with, check out:

These would all be good sprinkled or spread or drizzled on top of the pizza after it comes out of the oven!

And if you make this pizza, let me know how it turned out! Take some pics and tag me #lovingitvegan on instagram too! Would love to see what you’re making!

And definitely sign up to our mailing list! You’ll get an awesome free ebook containing 10 fabulous recipes! AND you’ll stay updated with all our latest recipes posted to the blog. Yeppers! That’s good stuff! 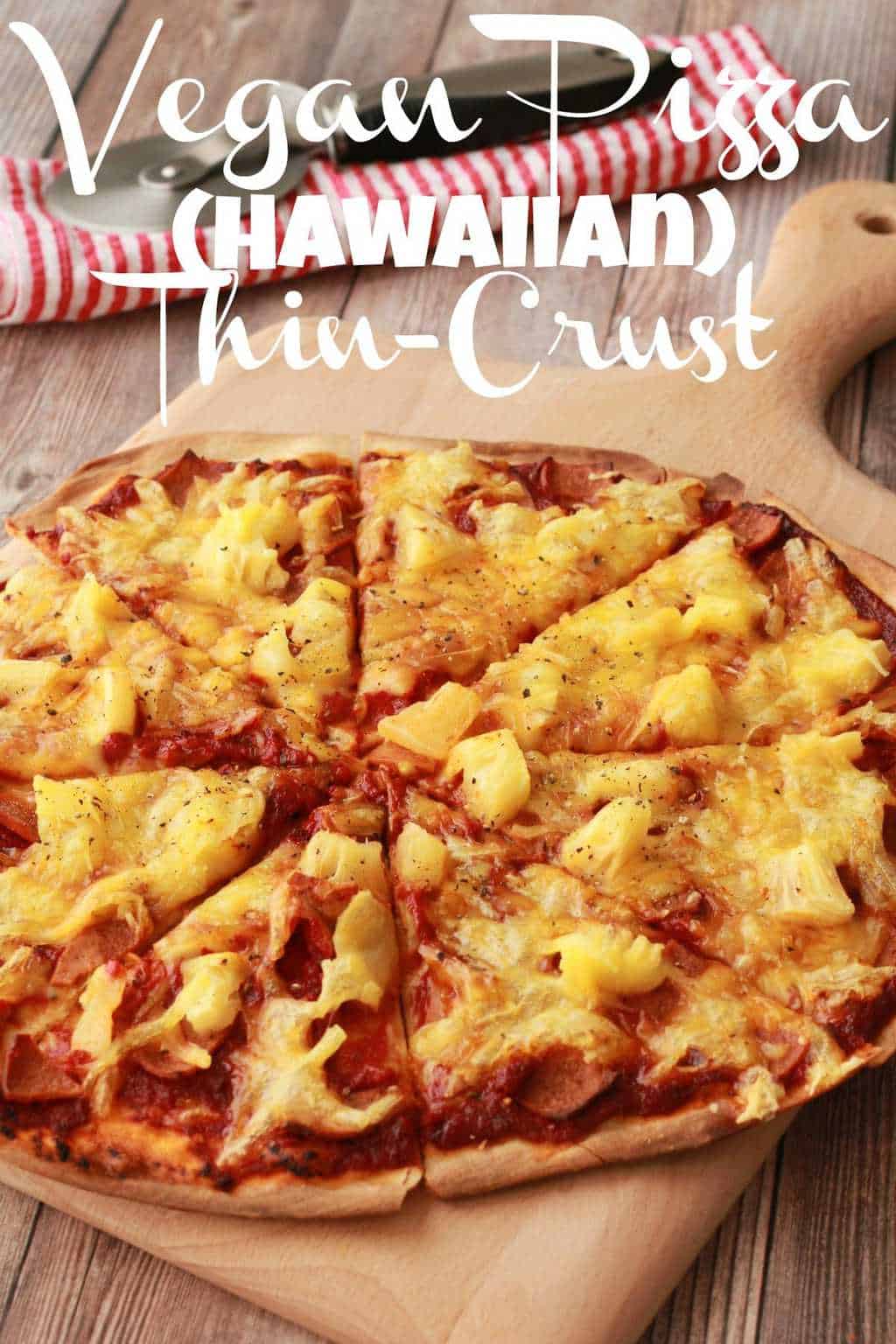 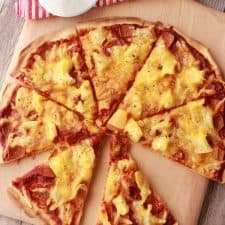 For the Pizza Dough:

For the Tomato Sauce:

For the Hawaiian Toppings: