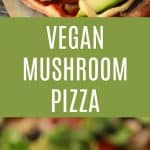 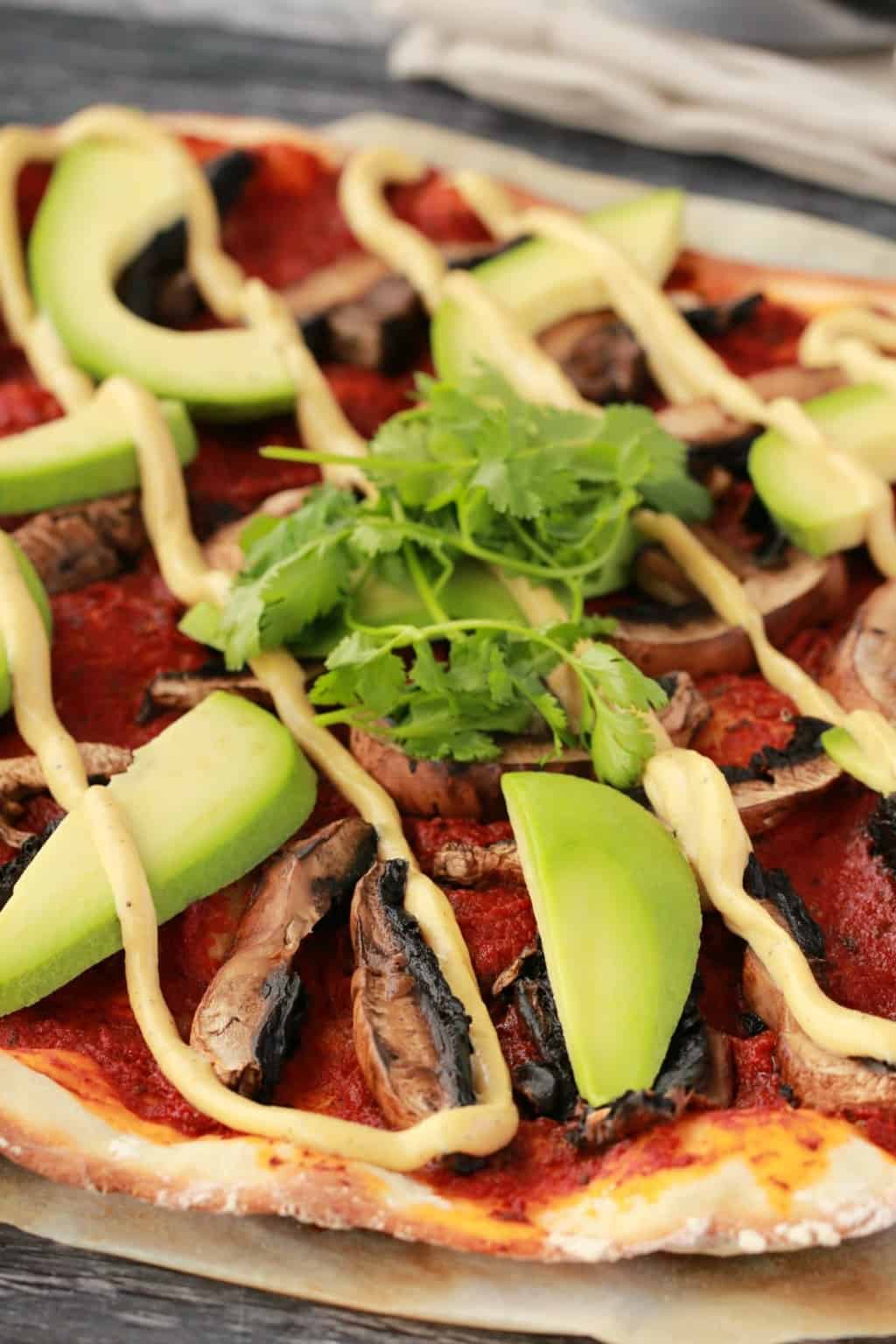 It’s a homemade (and simply divine) pizza crust topped with a rich tomato sauce and lots of sliced black mushrooms, which is then baked to perfection on a pizza stone (more on that later). That gorgeousness is then topped with sliced avocado and drizzled cashew cheese.

It’s simple and oh so good. Honestly I haven’t found a place to get pizza that tastes as good as this homemade variety.

But of course we’re making this vegan mushroom pizza from scratch, so it does take a bit of time, but it’s really worth it when you get a pizza this good. 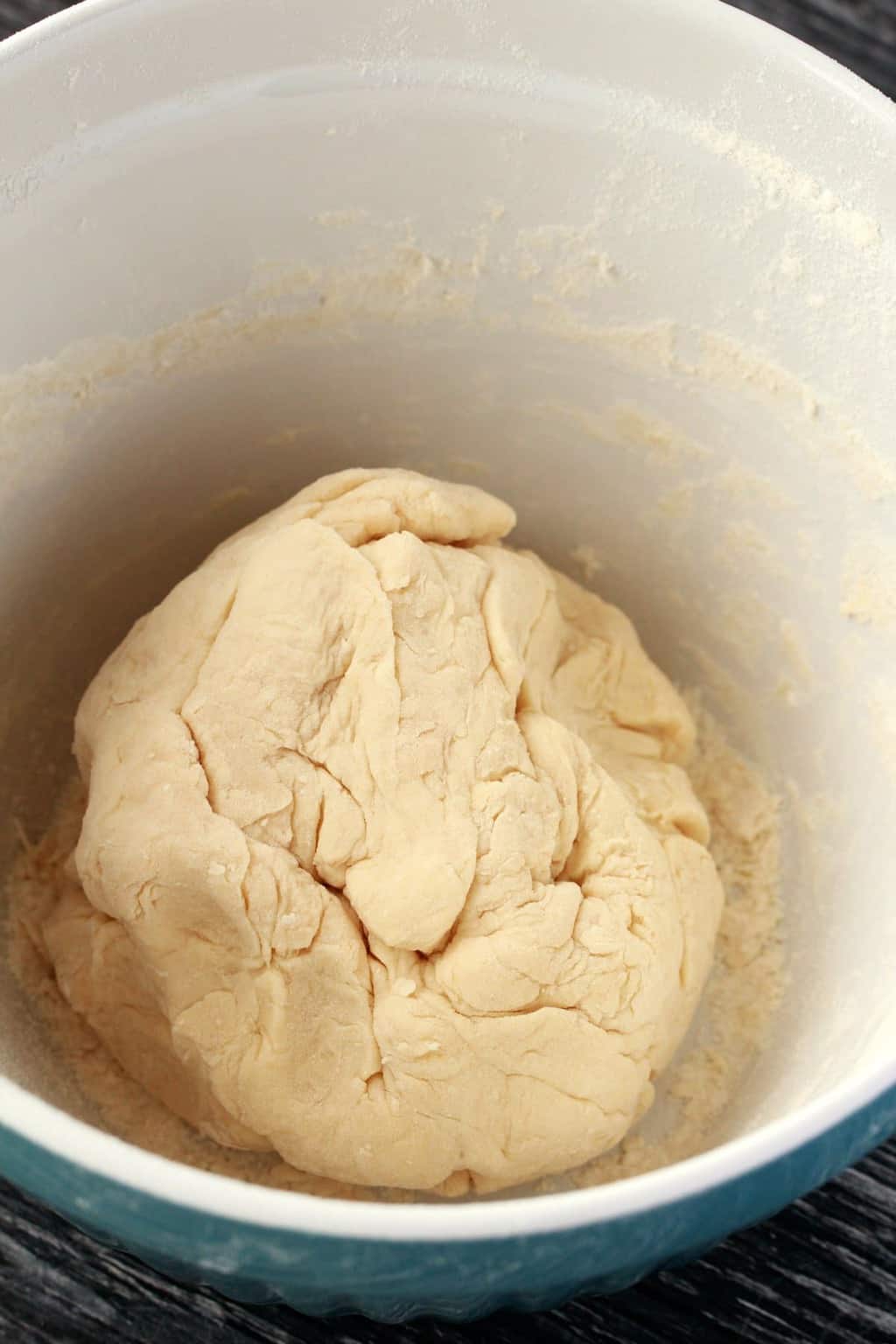 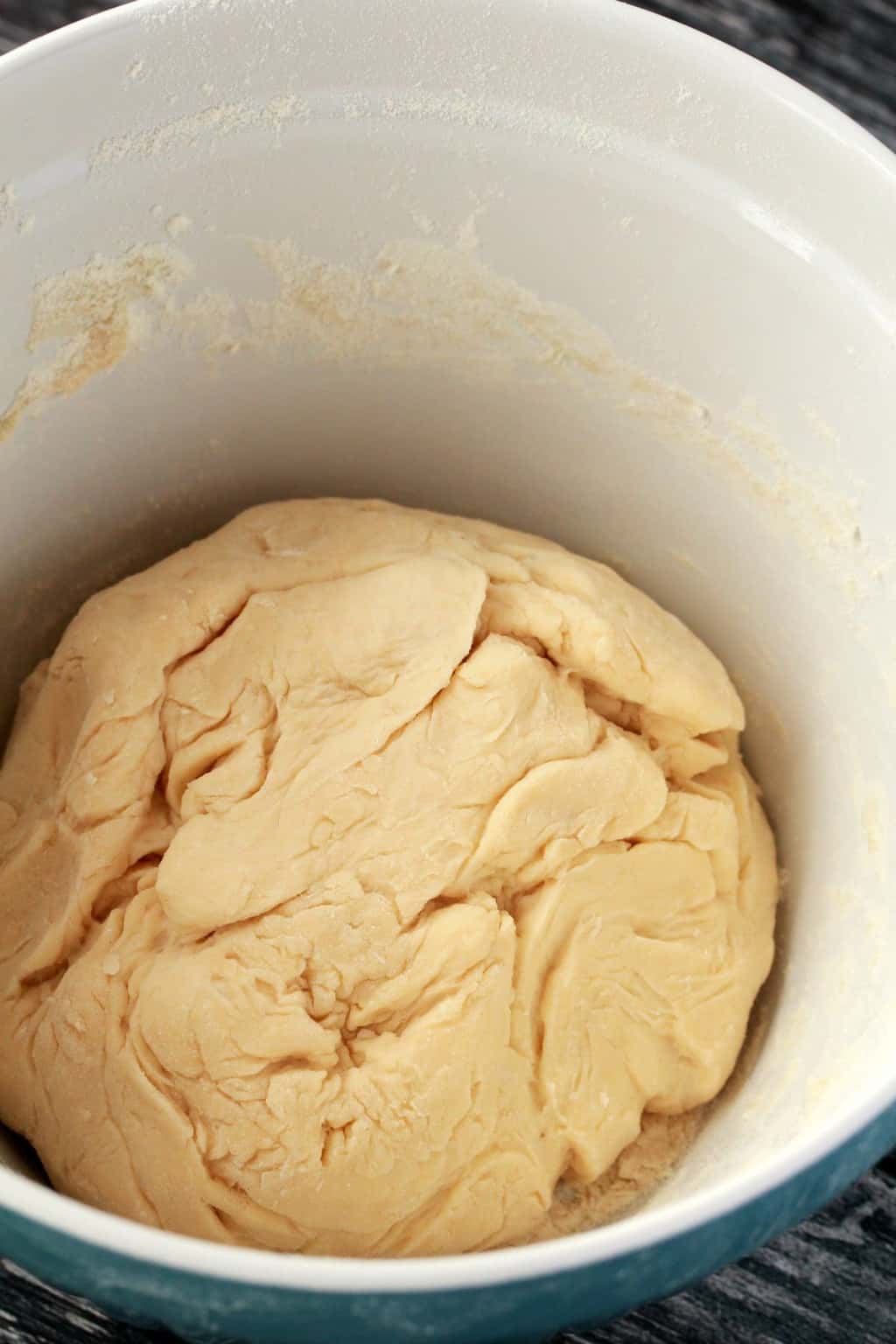 You start off by making the dough, which is a really easy 4-ingredient recipe. The hardest part is kneading the dough with your hands for 5 minutes. So you see, actually not hard.

Then you leave the dough in the mixing bowl, cover it with a tea cloth and let it rise for an hour.

Take your pizza stone and cut out two pieces of parchment paper that roughly match the size and shape of your pizza stone. Usually the parchment isn’t big enough in width to cover the whole pizza stone but that’s okay just cut it out to be roughly the same shape.

Then place your pizza stone into the oven (from cold, no preheating required) and set the oven to a super hot temperature – 465°F (240°C) – and let that heat for an hour as well. So by the time your dough is ready, your pizza stone is also sizzling hot.

A pizza stone is crucial in making good pizzas in your oven. If you don’t have a pizza stone, you can buy your bases ready-made and then just use these toppings to make a great tasting vegan pizza.

I tried many methods of making a pizza base from scratch in a regular oven without a pizza stone and it just did not come out that great. So I think if you love pizza, then a pizza stone is a worthwhile investment. We use the round pizza stone made by Ceramic Chef (not an affiliate link).  It’s been working great for us, but any good ceramic pizza stone should do the job. 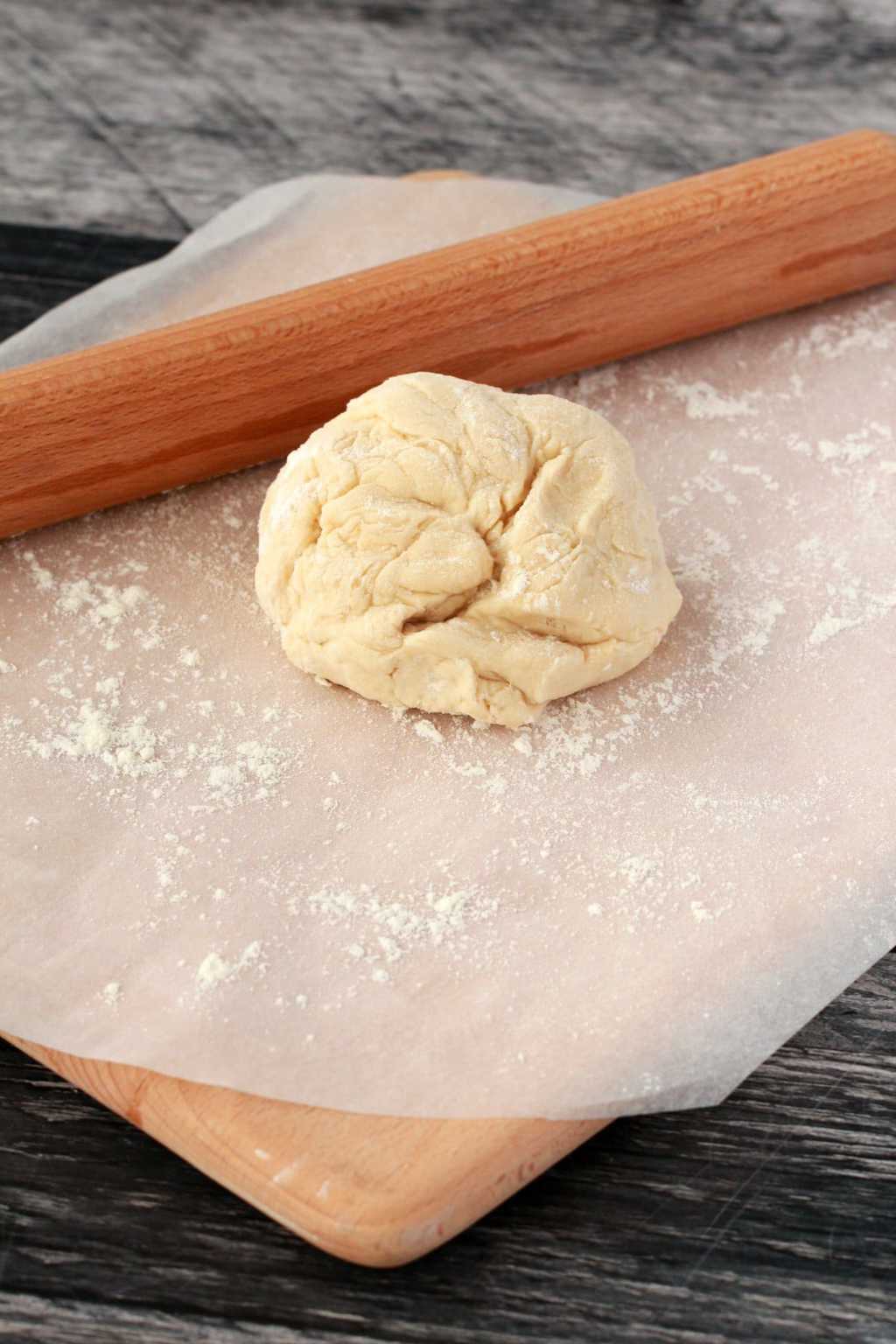 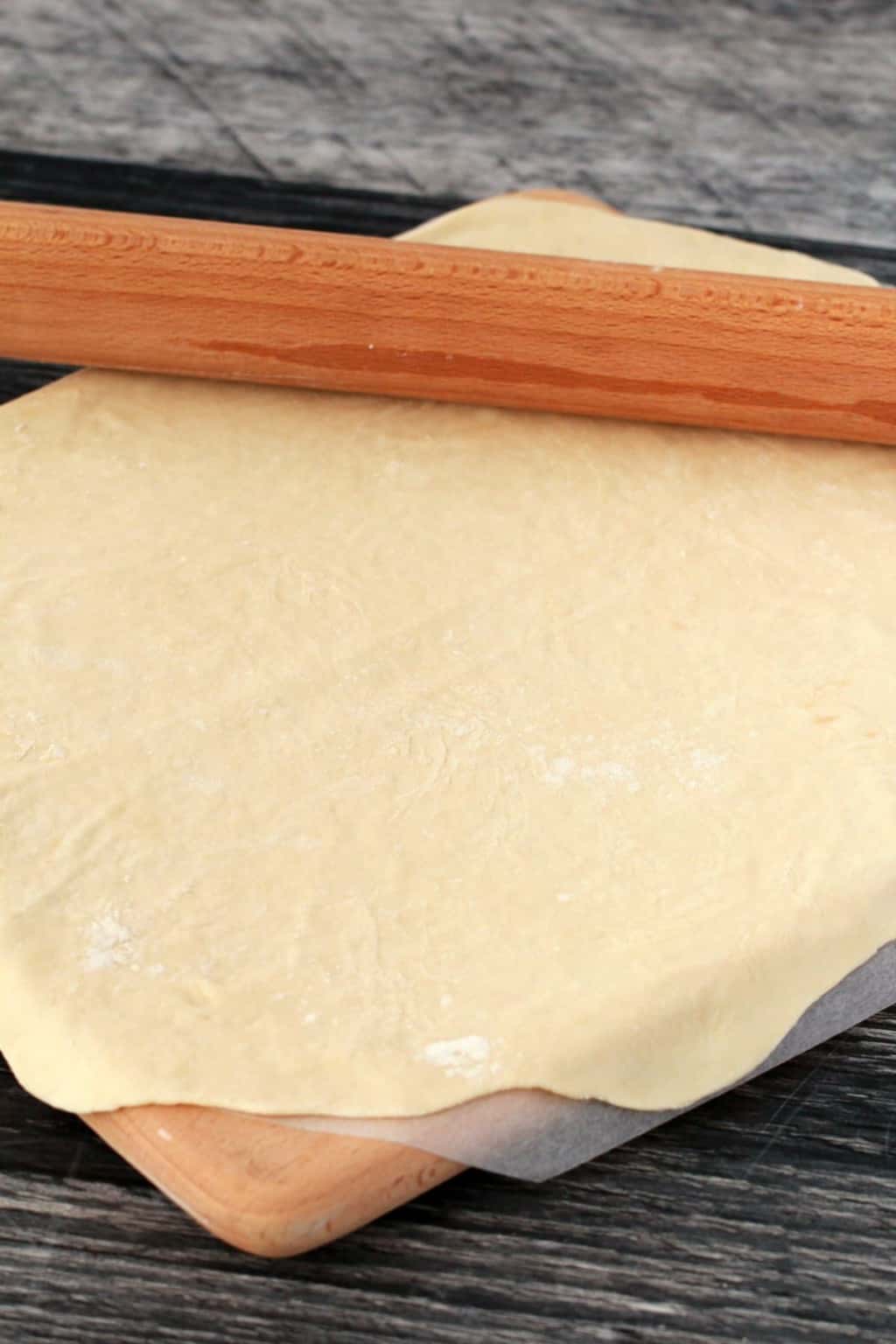 So since this is a thin-crust pizza, you take that dough, once it’s risen, and divide it into two. Don’t mush it with your hands or anything, don’t try to compress it, or it makes it harder to roll out. Just pick up the big ball of dough and break in half. 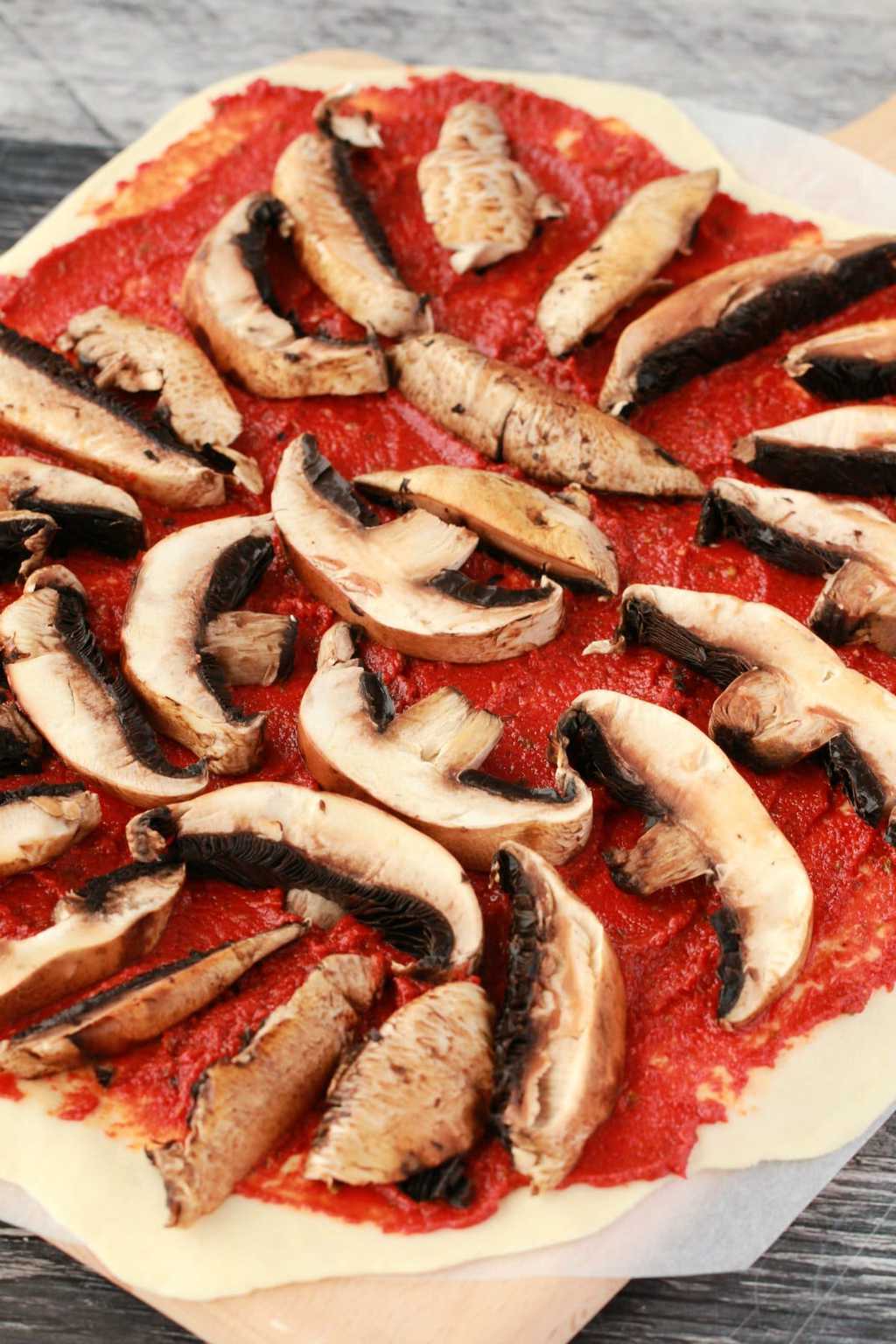 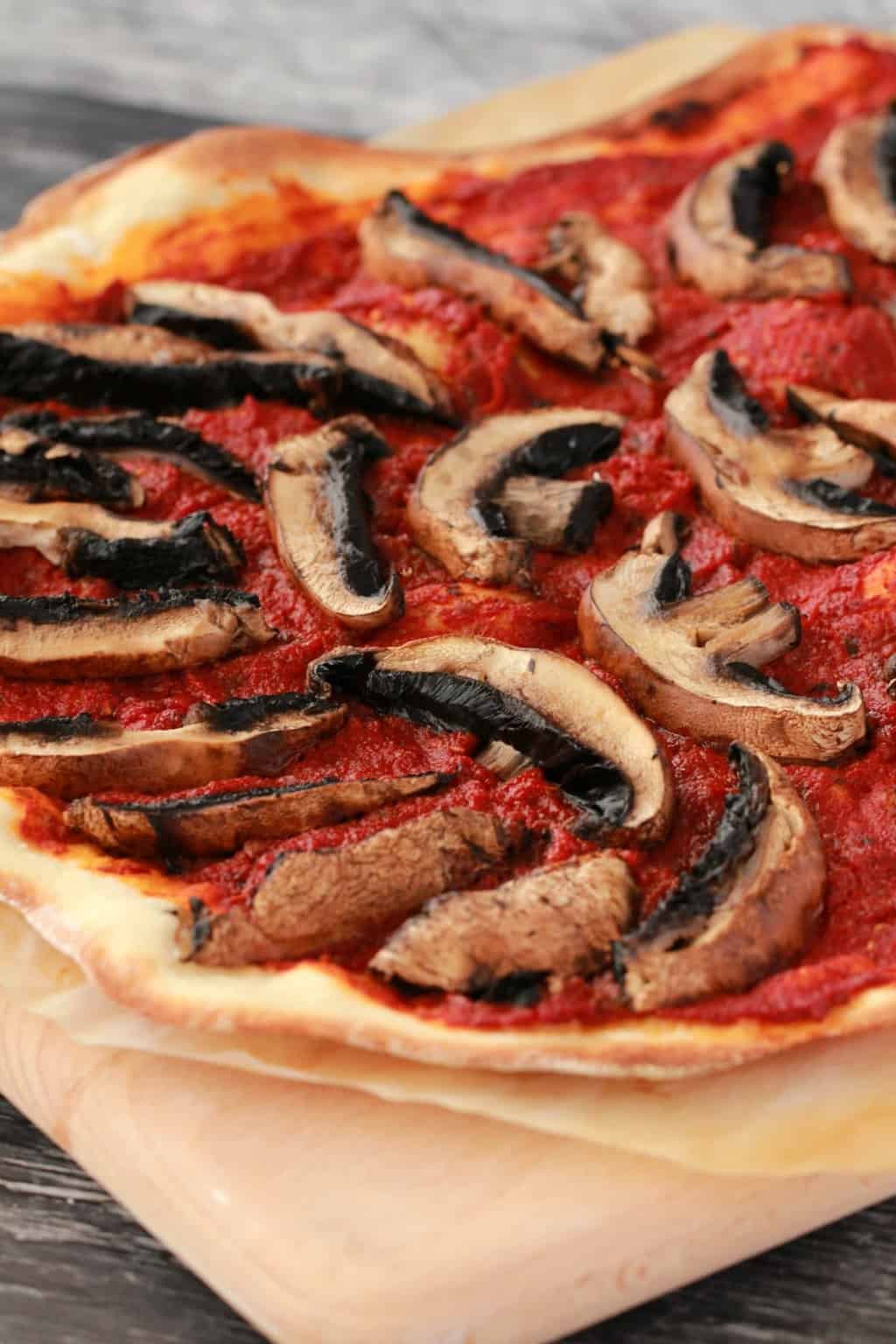 Then you add your toppings! And then open the oven, and transfer the parchment paper with the pizza on top from the wooden board over to the pizza stone. Close the oven again, and roughly 8 minutes later you have a perfectly crispy thin-crust pizza!

To remove it from the oven you just grab that parchment paper and slide it from the pizza stone back onto the wooden board.

Be careful of course, oven gloves are crucial! 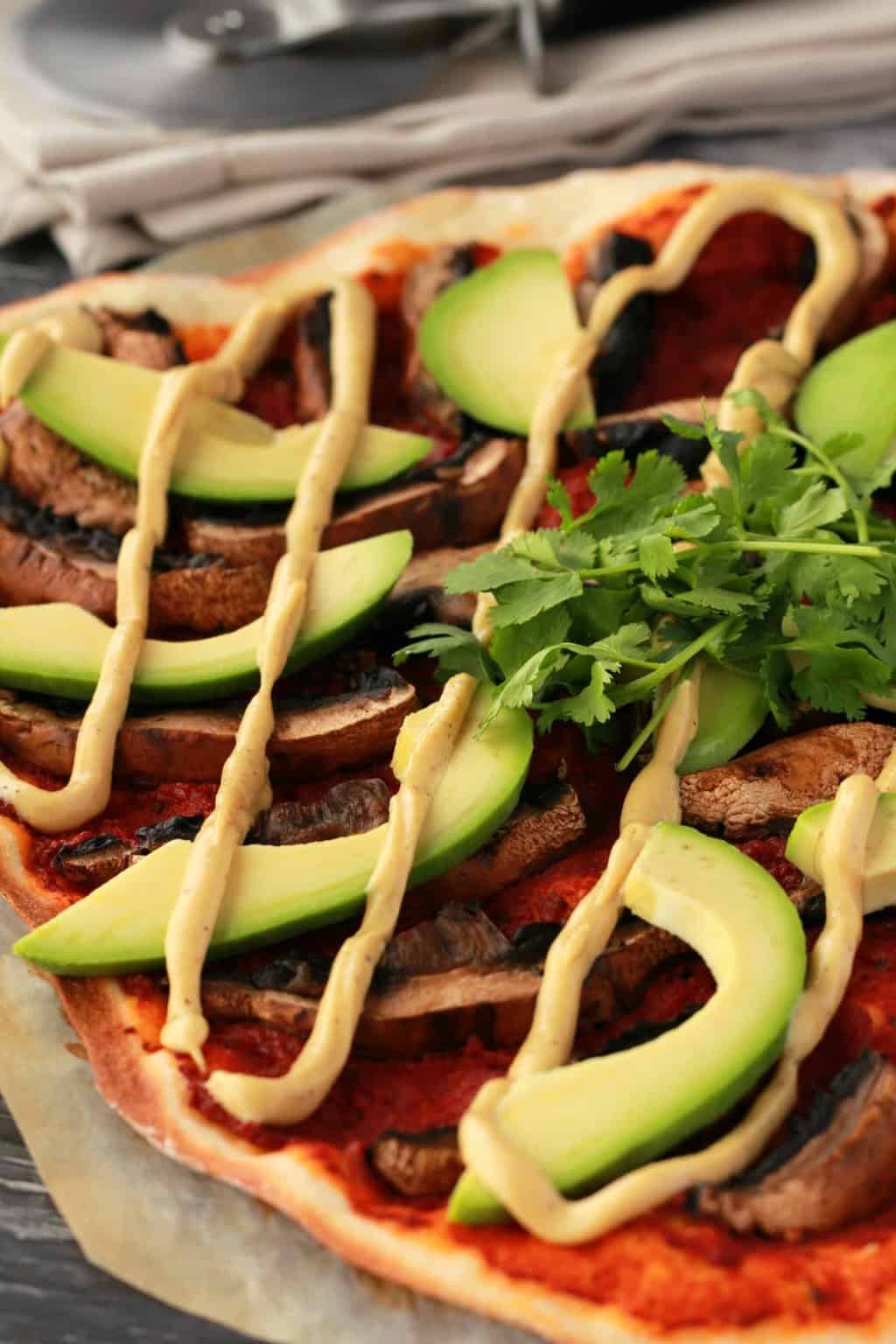 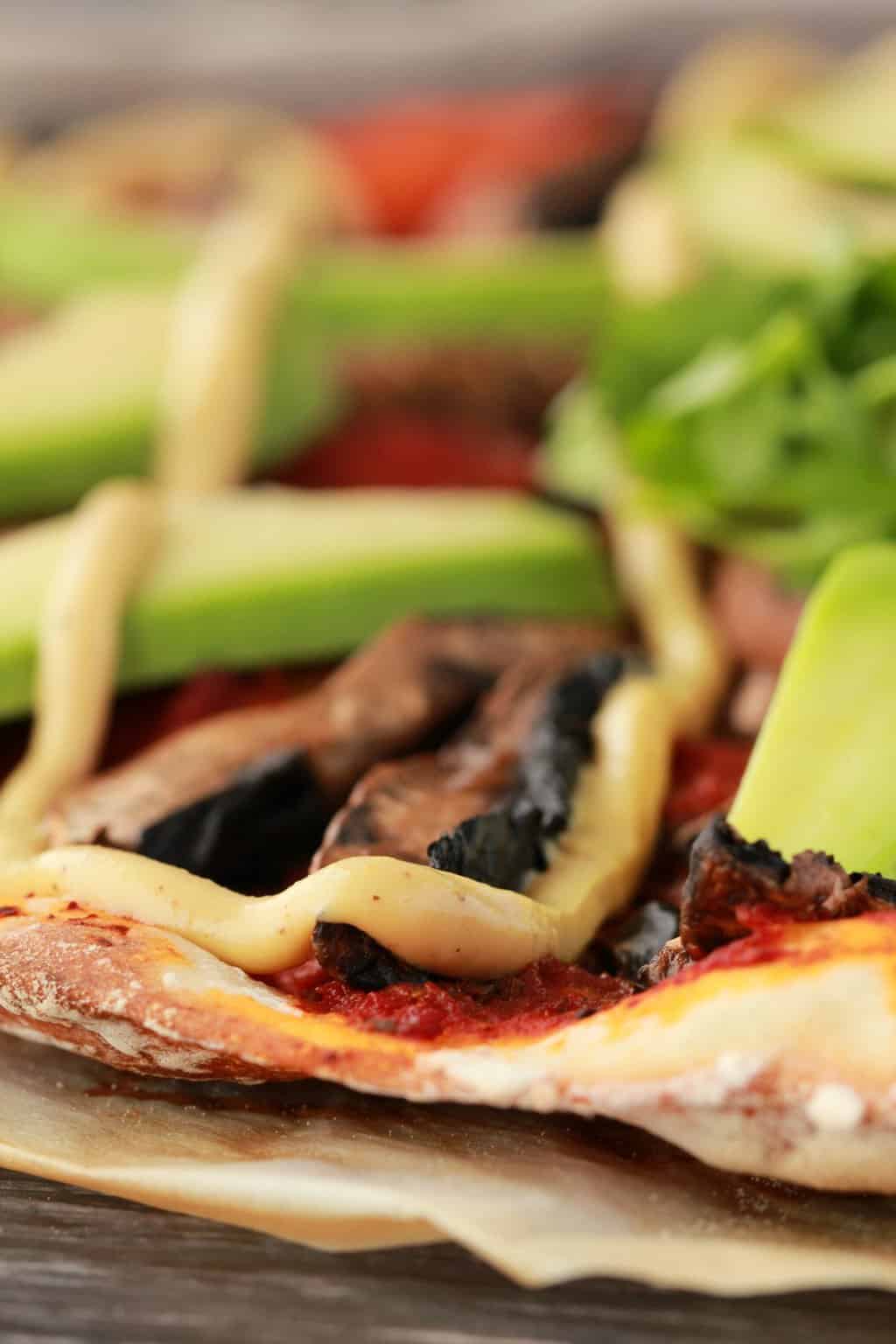 Then you can let it cool for a couple of minutes before adding your sliced avocado and drizzling on some cashew cheese.

Let the oven heat up a little again between pizzas and when it’s right up to full temperature again, put in the second pizza the same way, and repeat! 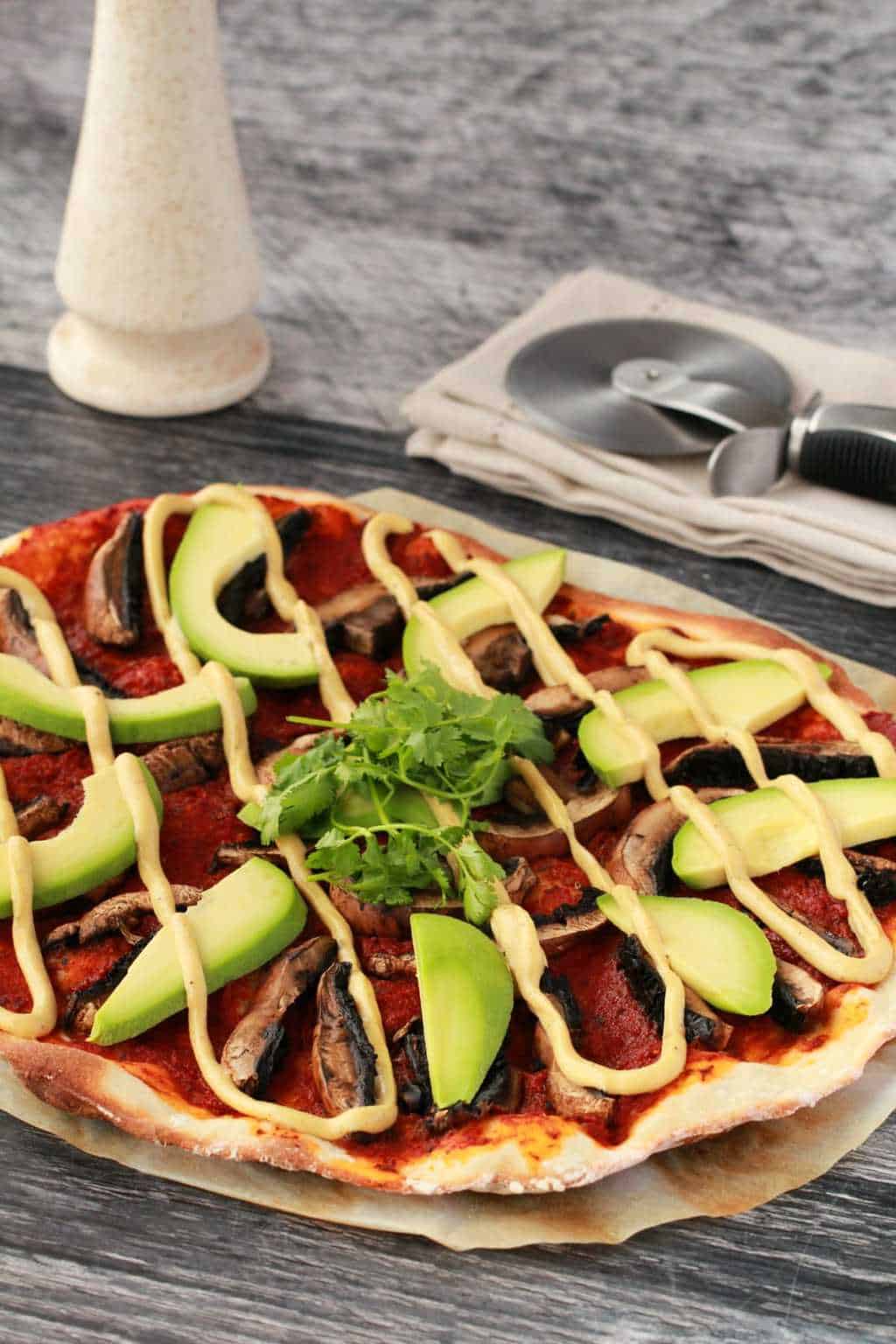 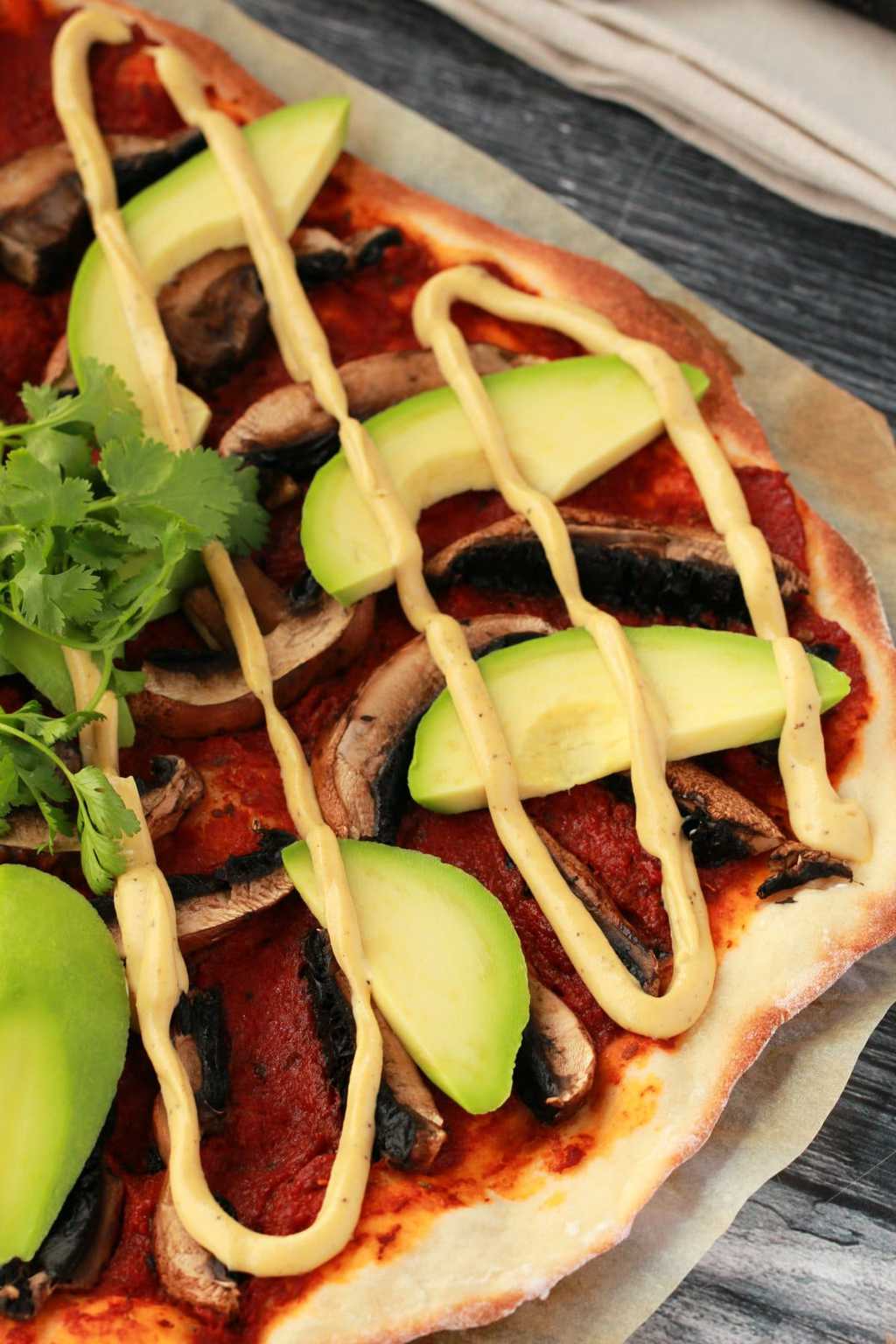 The result is crispy, thin-crust perfection! And you get to put on exactly as many toppings as you want! So it’s satisfaction guaranteed!

If you cook it a bit too long, the result is a slightly chewy texture, so if it’s chewy, it’s actually overcooked and not undercooked. It will still be edible and tasty though but if this happens then you’ll know you left it in just a smidge too long.

I think you will LOVE this thin-crust vegan mushroom pizza! It is:

Leftovers keep very well and you can enjoy them the next day. 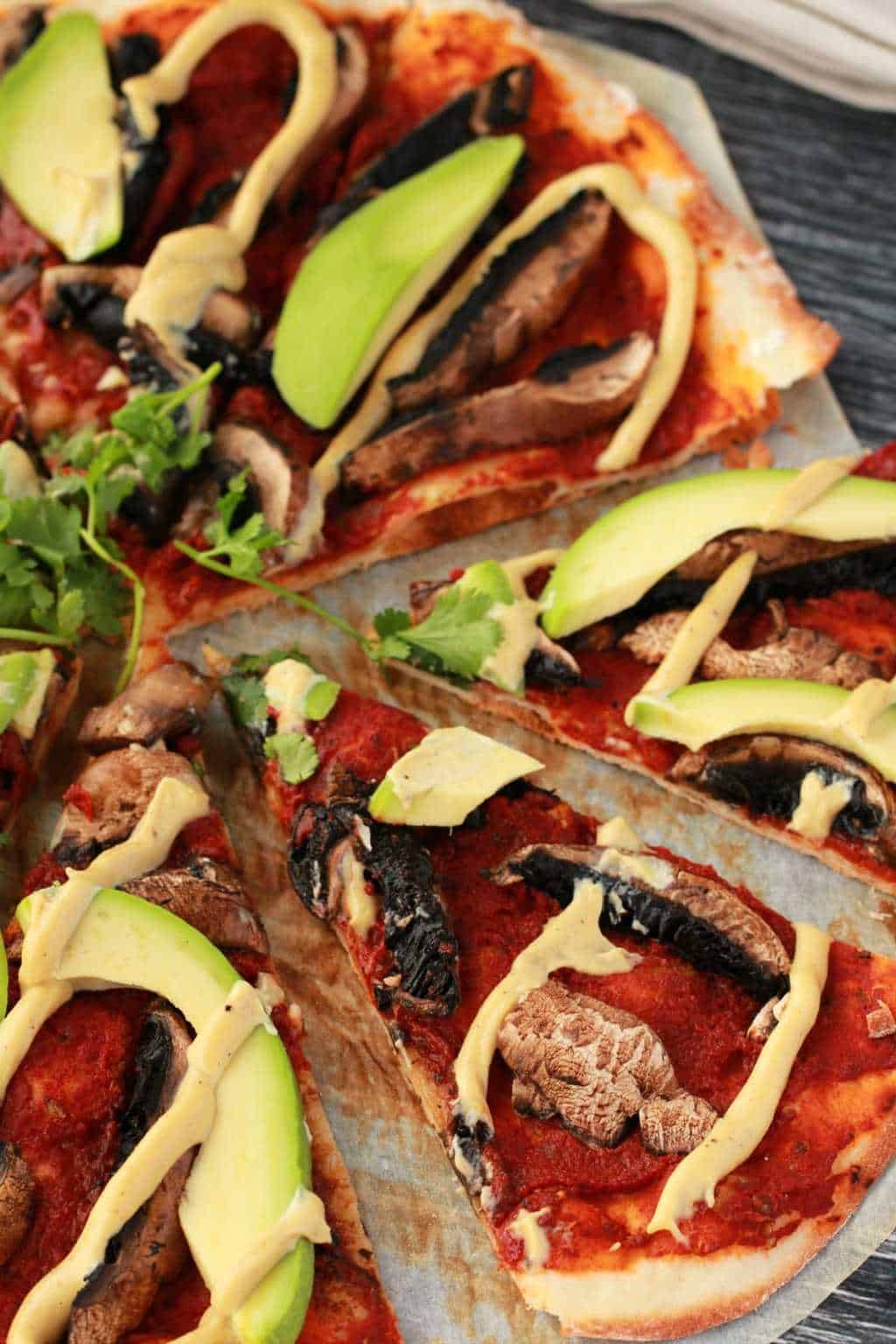 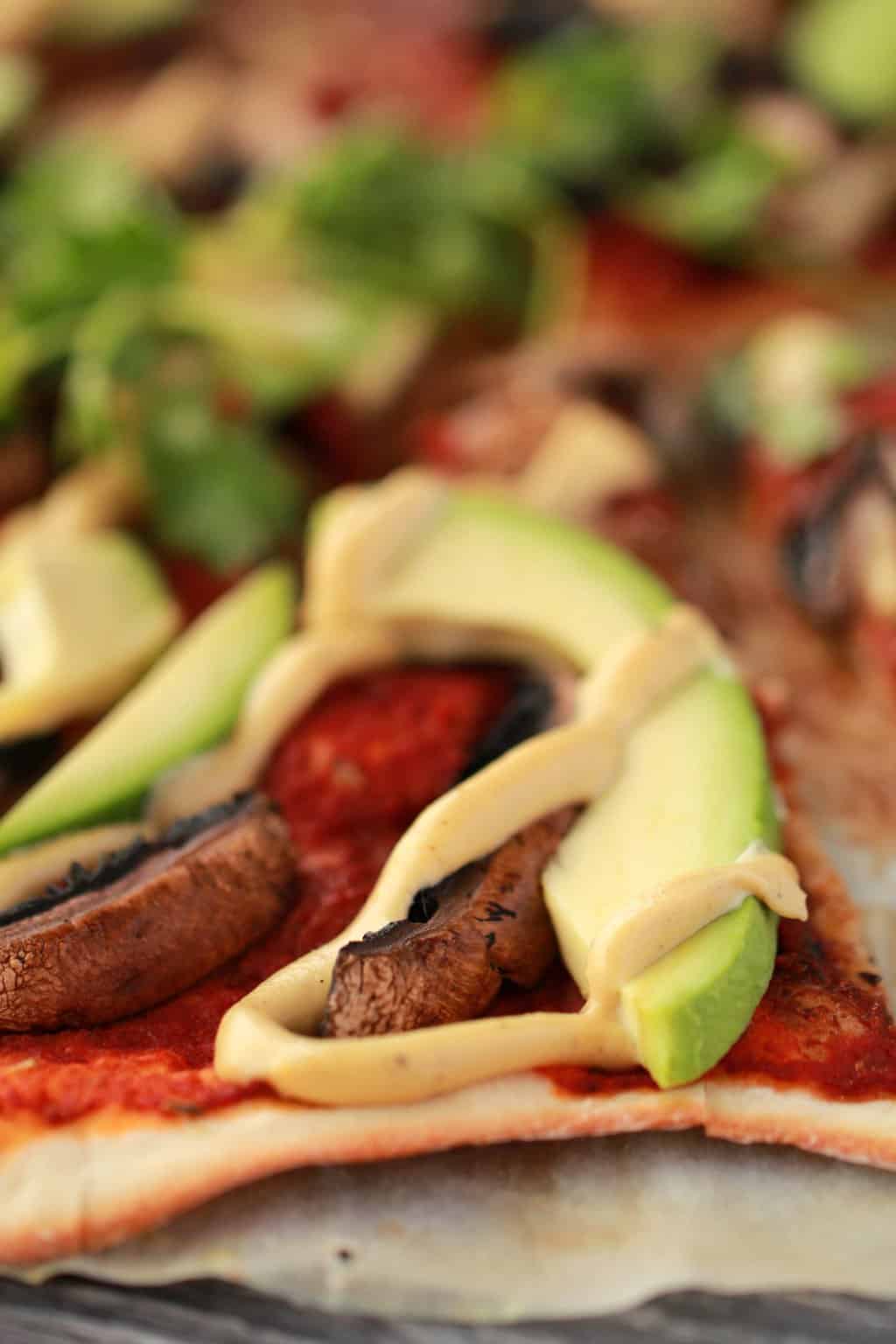 So let us know what you think of this vegan mushroom pizza in the comments! If you have any questions, fire away!

And if you make this vegan mushroom pizza, rate the recipe and let us know how it turned out!

Sign up to our email list for an awesome recipe ebook (free!) and to stay updated with all our latest recipes! 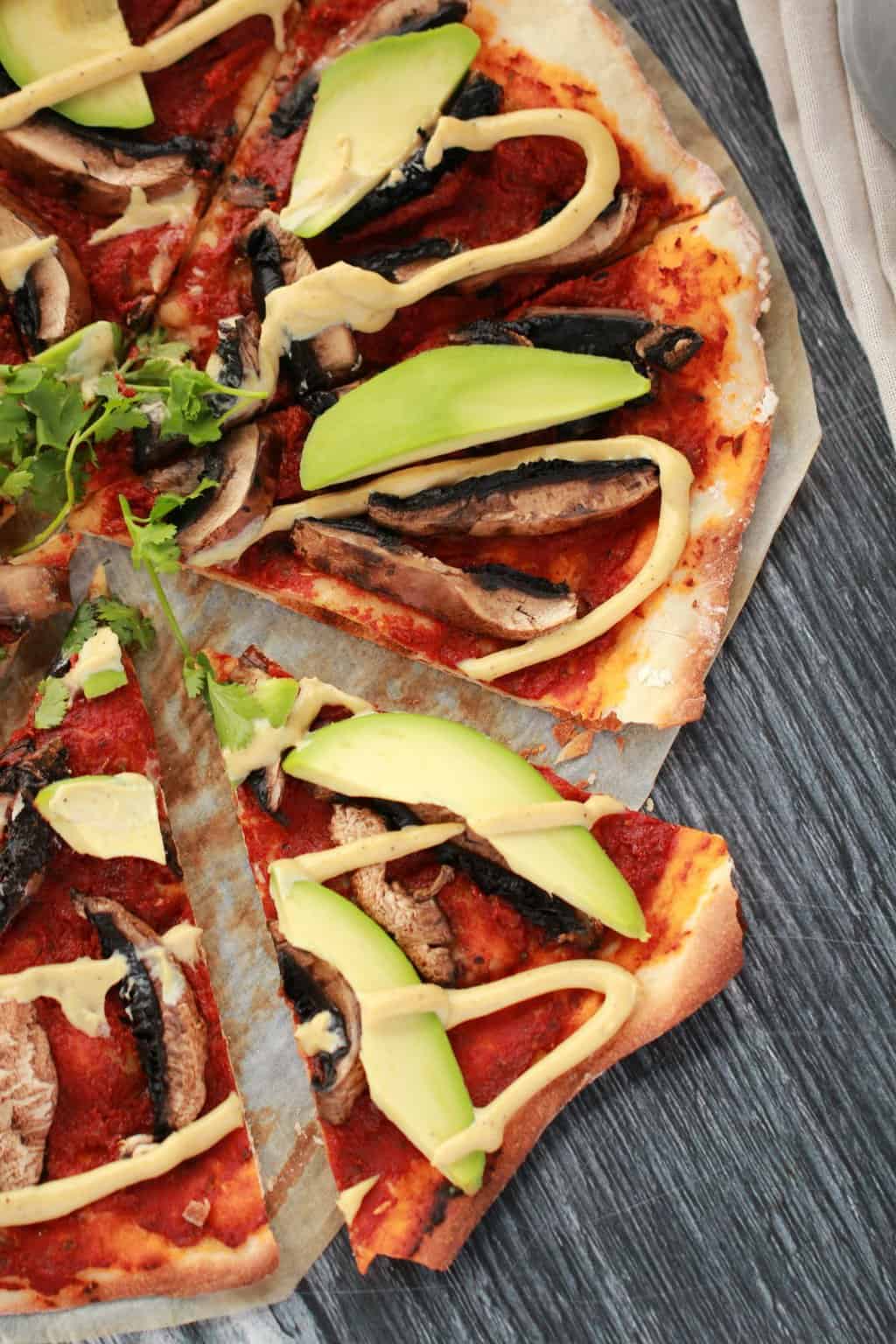 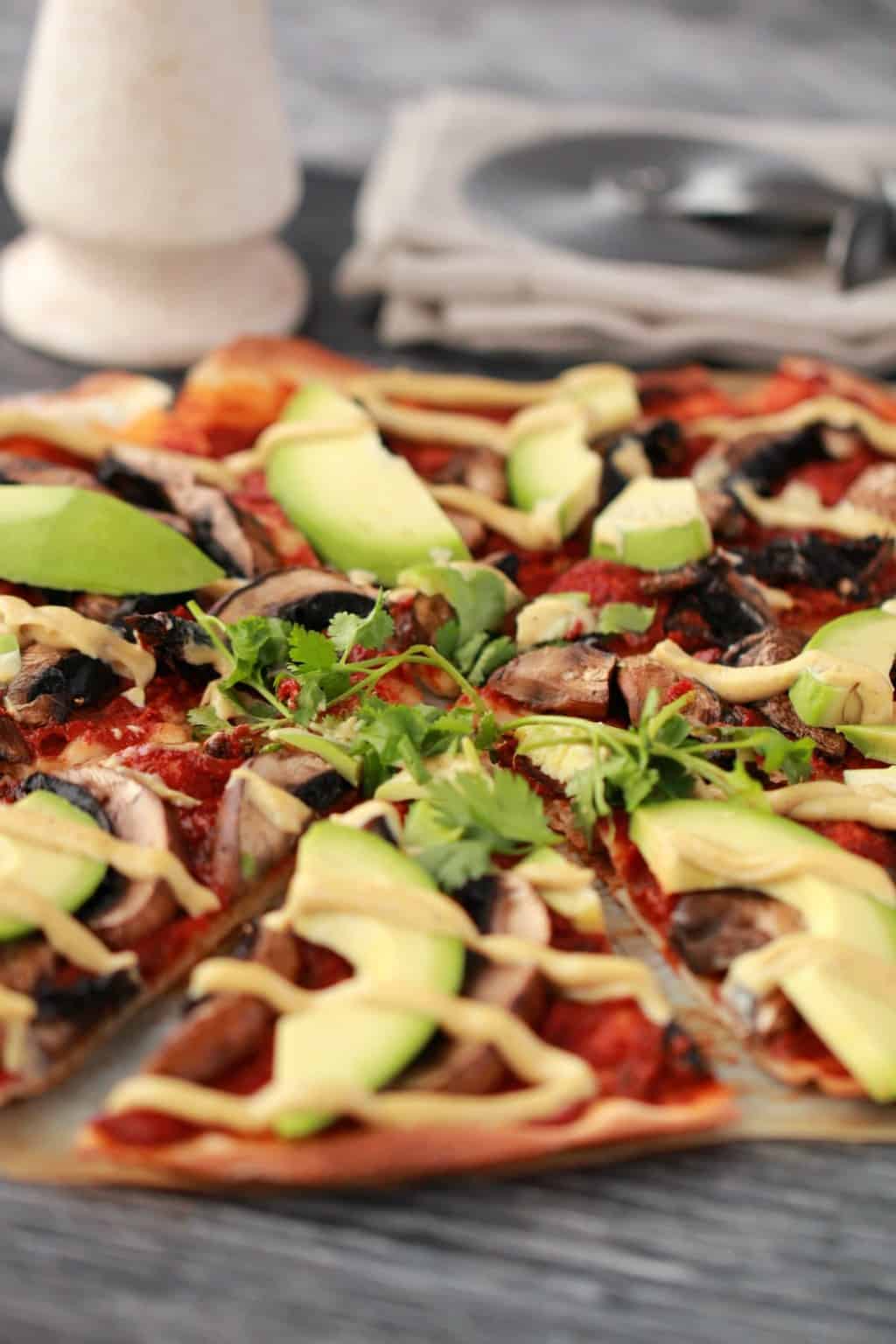 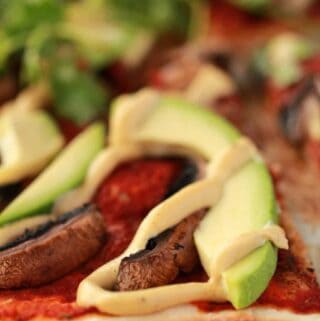 For the Pizza Dough:

For the Tomato Sauce: