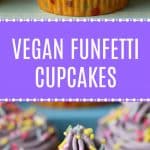 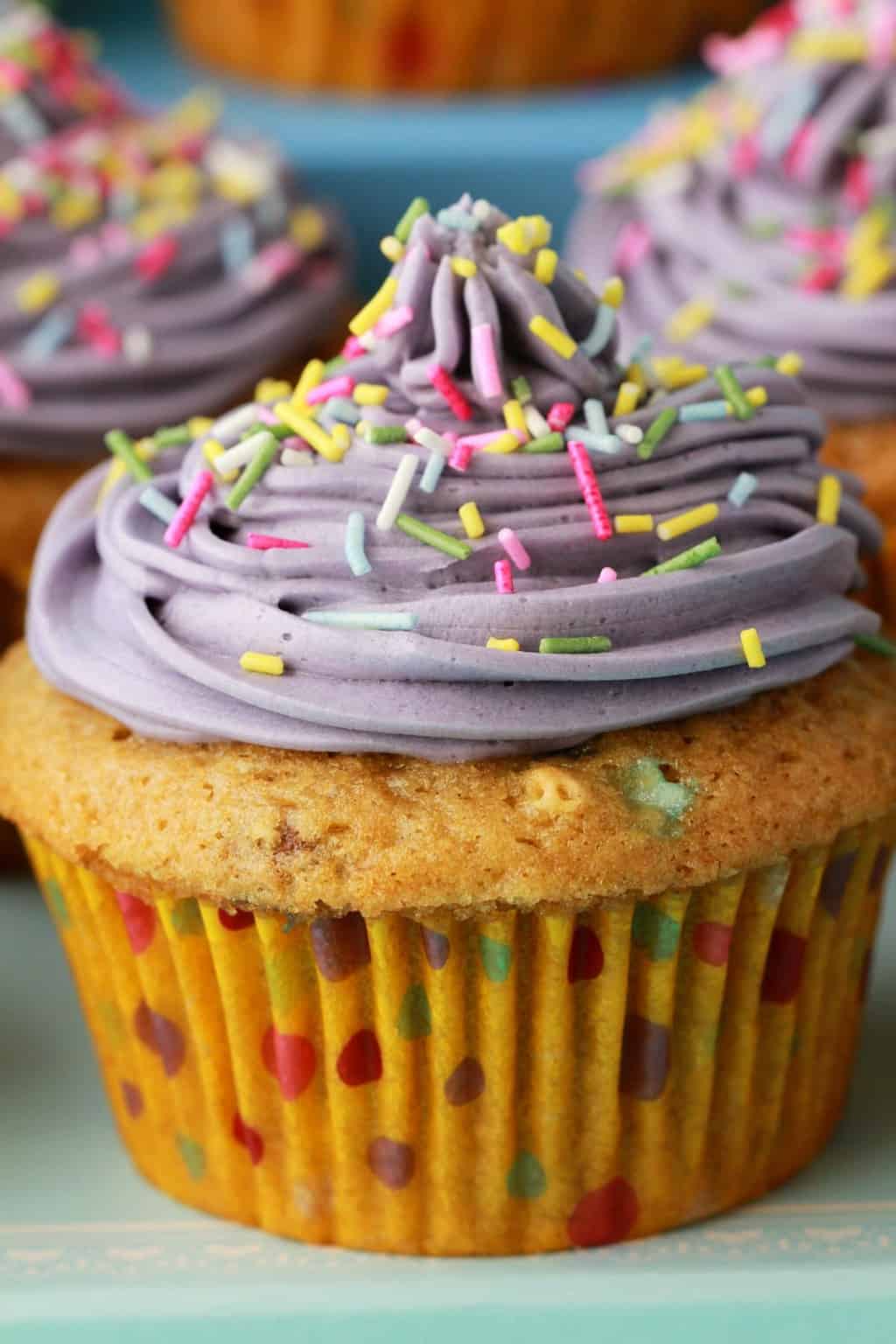 Funfetti cupcakes are cupcakes with sprinkles baked into them. So they’re super pretty and cute and multicolored inside and of course you top them with plenty more sprinkles!

Lots of fun and kids dig it! (My niece was very impressed).

And it’s super simple to do as you can simply adapt a winner of a vegan vanilla cupcake recipe, which is exactly what I did!

So what could go wrong? Well everything, if you use the wrong sprinkles!

I kinda knew that rainbow sprinkles were the best ones to use, except I couldn’t find them. So I just got some regular sprinkles off the shelf and hoped for the best. Ah well, you can just imagine what happened next right?

The sprinkles simply melted in, so my cupcakes were slightly sweeter, darker in color, and there was not a hint of a sprinkle remaining! 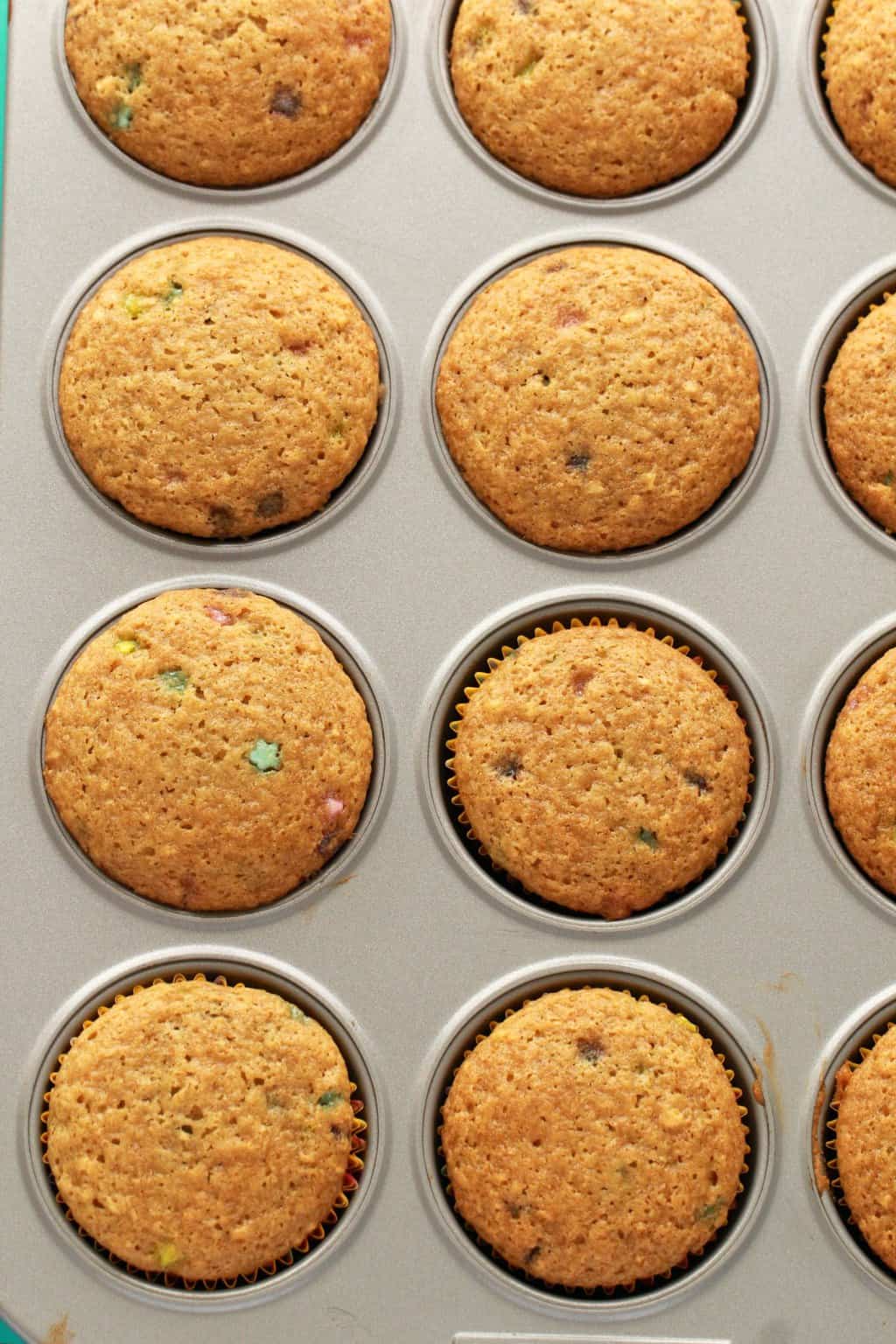 So then I tried a different brand, and these were non-pareils (little balls), which Sally’s Baking Addiction had used for one of her recipes, so I thought they had a good chance of working and yippee, they did!

You just have to be careful when mixing them – fold them in, don’t stir vigorously or the color will bleed.

At least these don’t just dissolve and disappear though! There are definite color bits all through the cupcakes.

However, if you can get rainbow sprinkles (also known as jimmies) these work great for funfetti cupcakes! 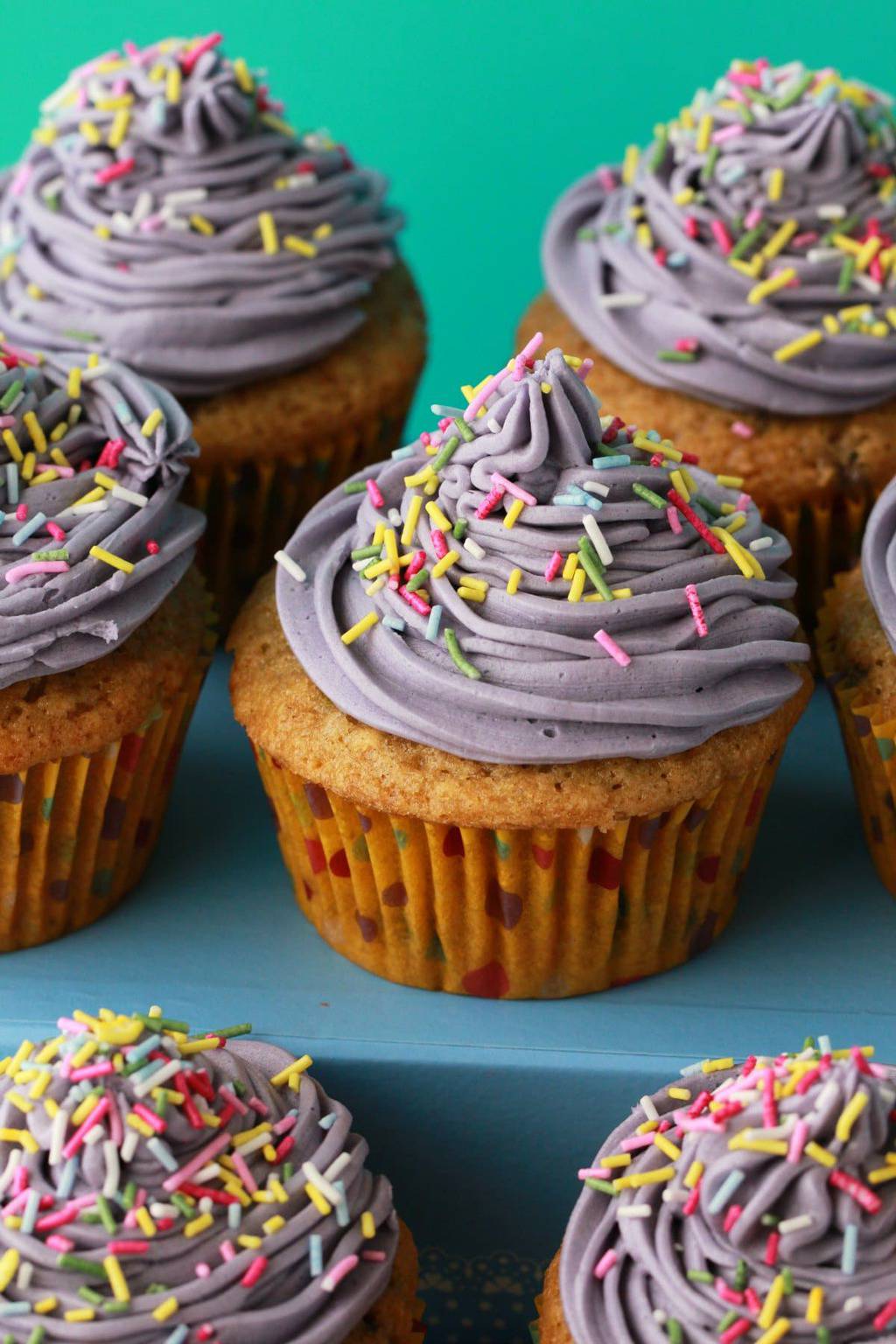 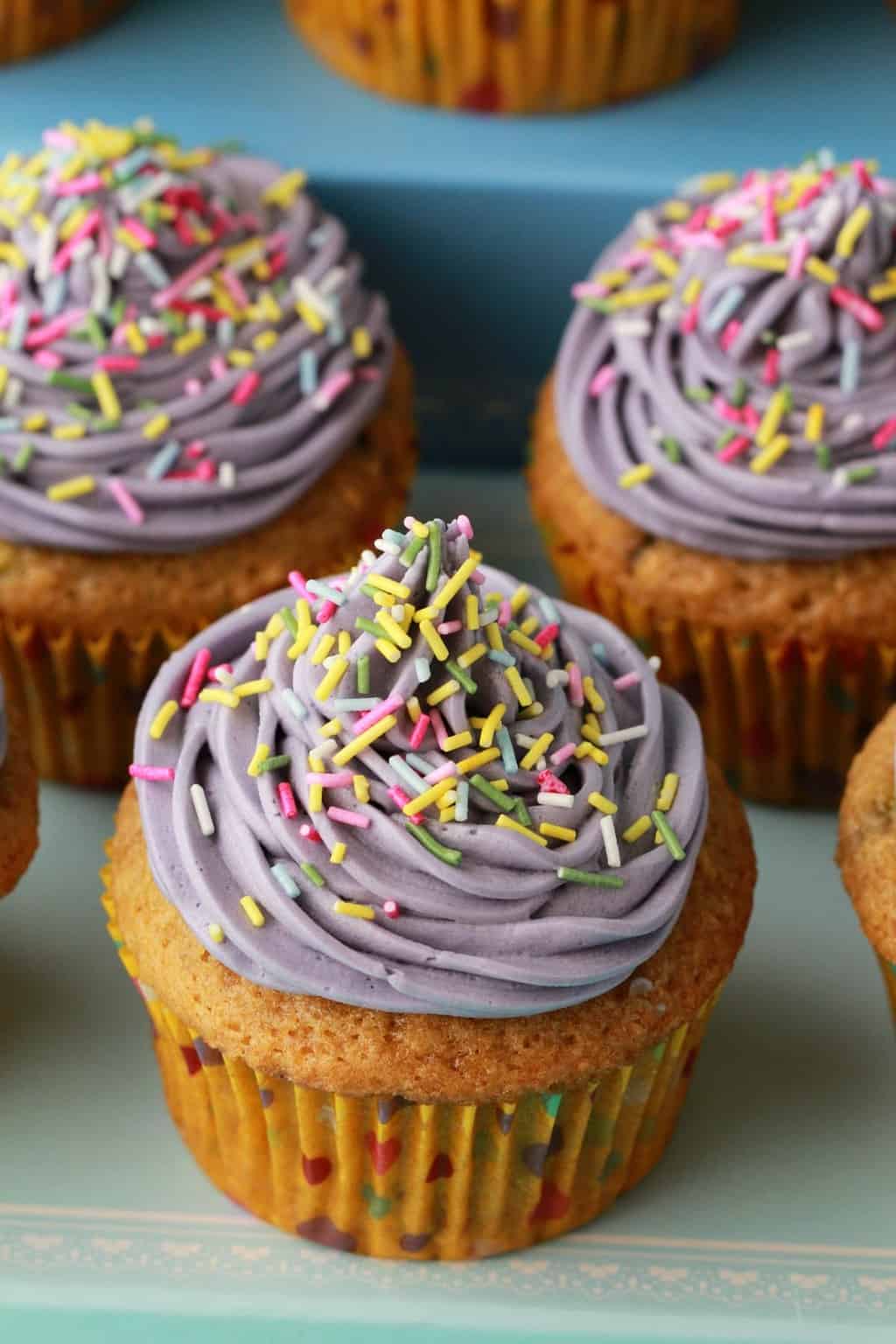 And then purple frosting – what can I say other than it’s just toooo pretty!

The frosting is a vanilla frosting with a few drops of violet food coloring added in. Purely optional, the recipe will stay the same (and taste the same) without it, so it’s up to you whether you go purple or not.(psst…you should go purple… 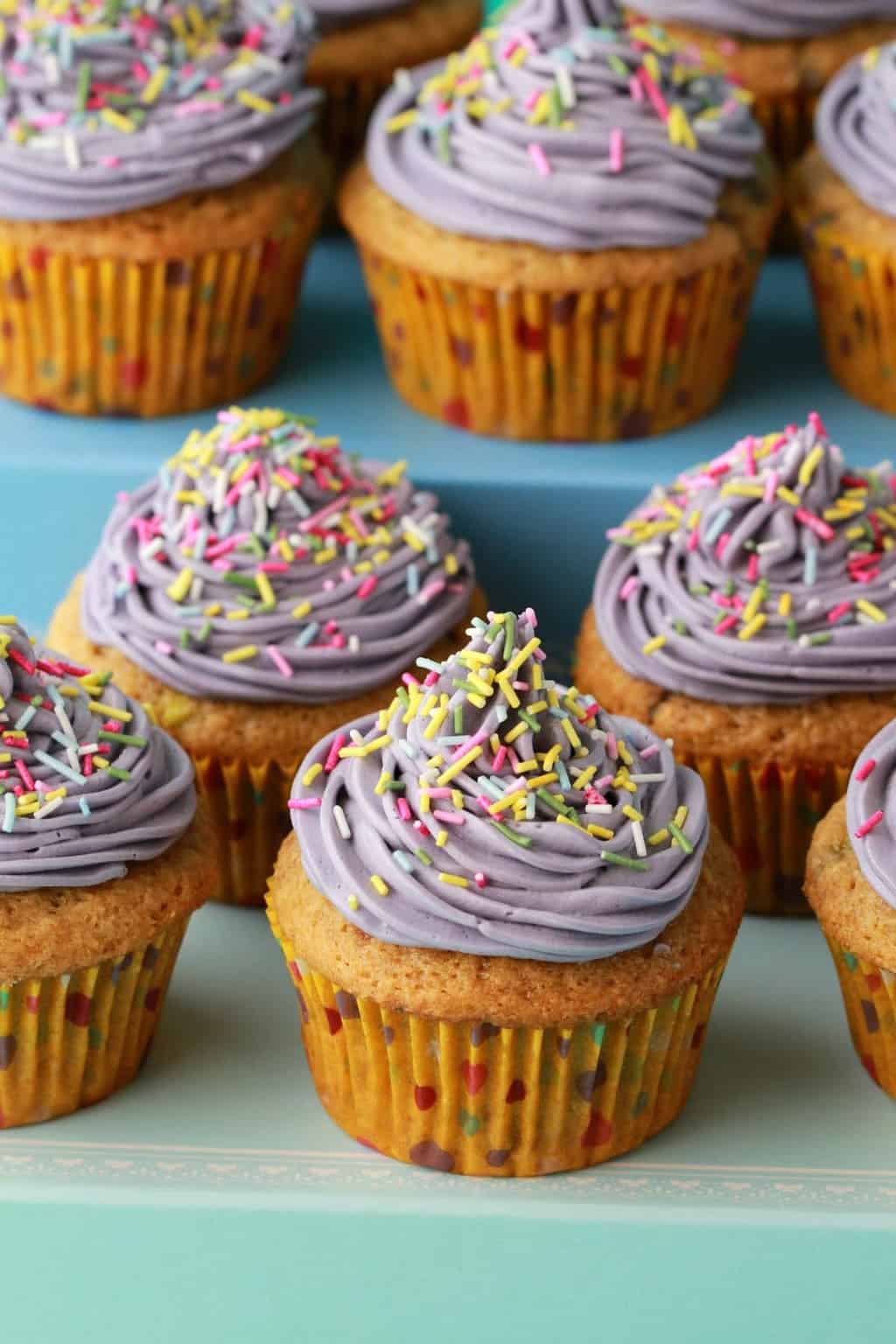 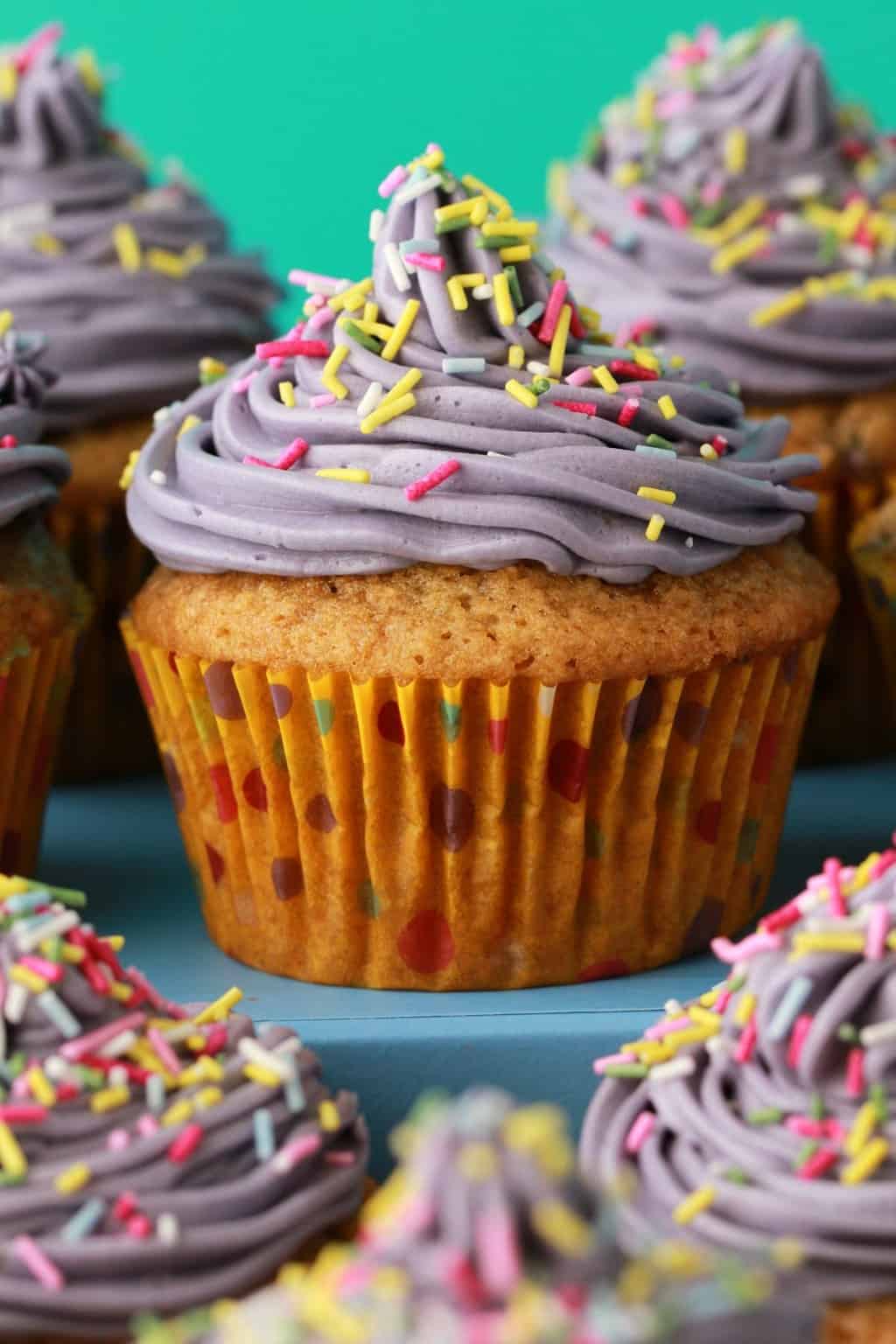 Lots more sprinkles on top and there you have it – vegan funfetti cupcakes! 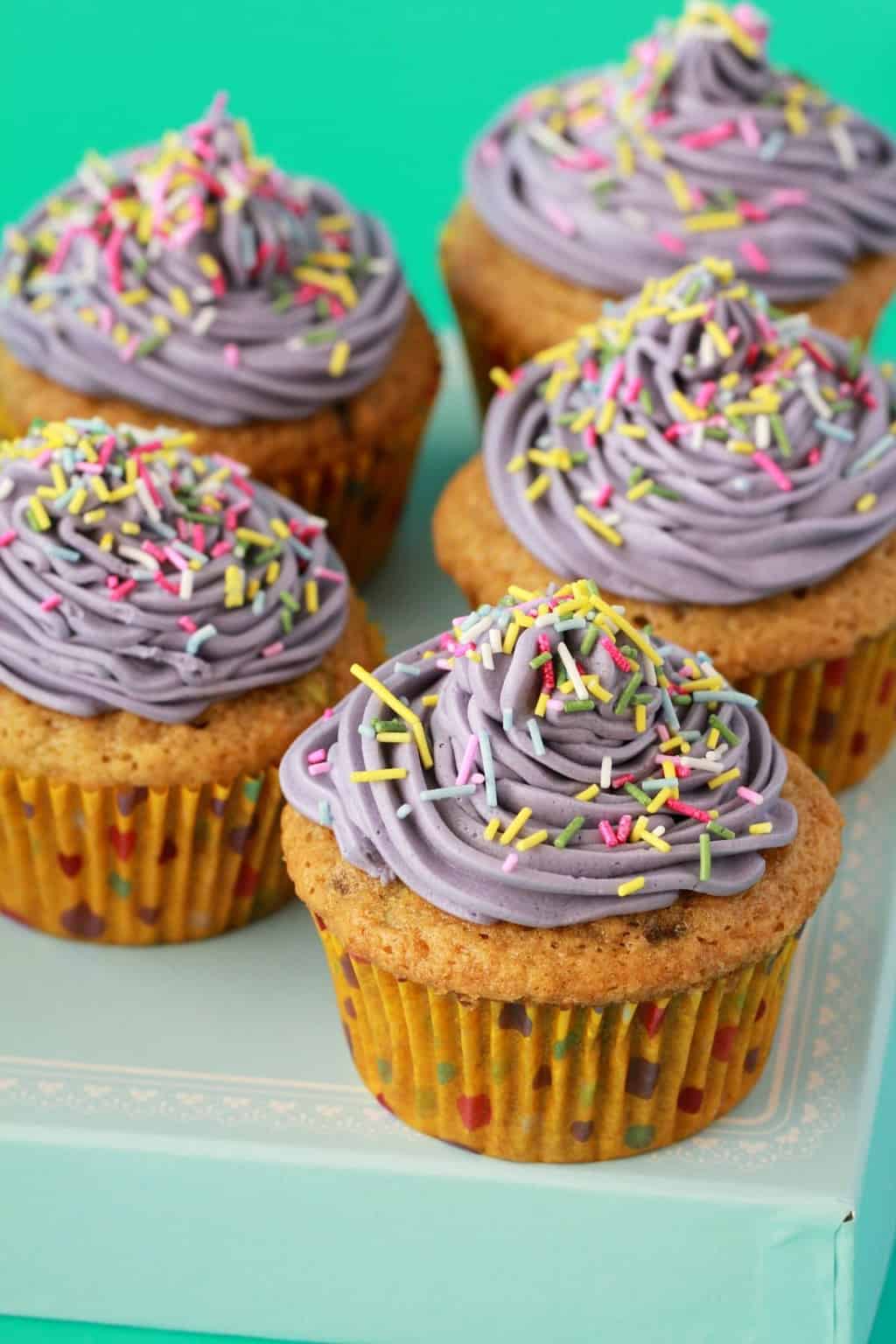 You will love these vegan funfetti cupcakes, they are: 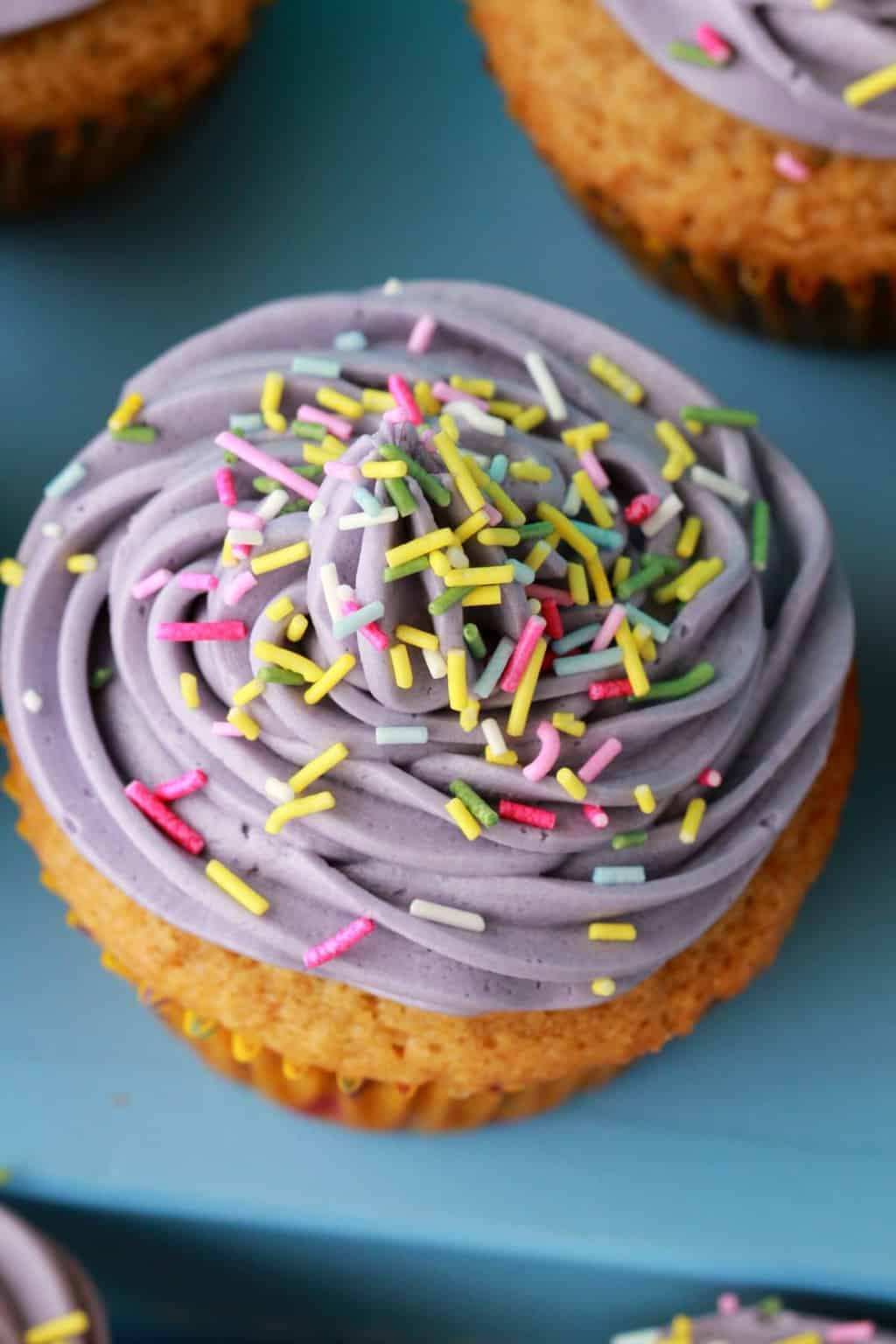 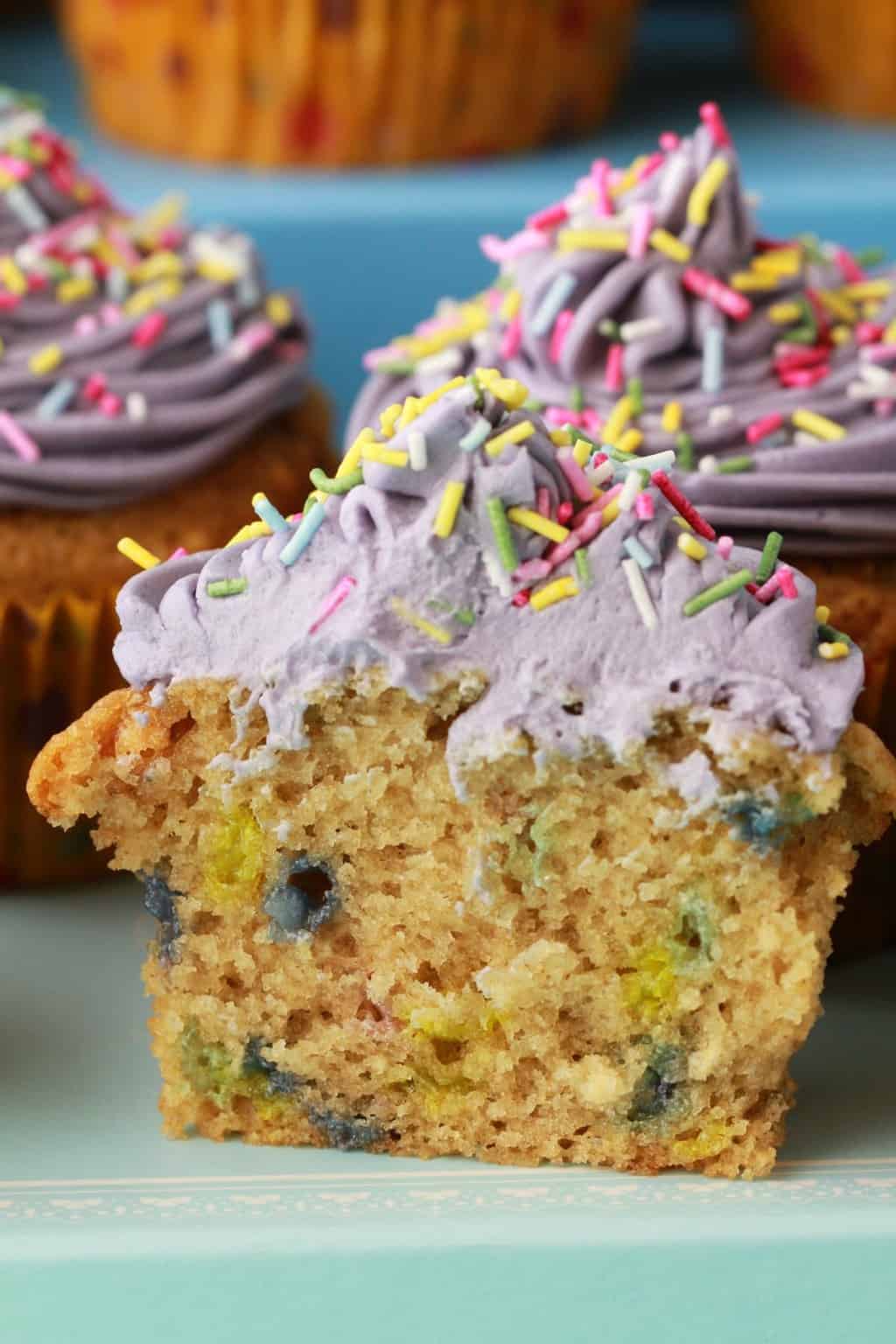 So what do you think of these funfetti cupcakes? Let me know in the comments! And if you make them, tag us #lovingitvegan on instagram so we can see your pics!

Just to name a few!

And while you’re here, sign up to our email list, you’ll get a free recipe ebook (yay!) and you’ll always be the first to know when new recipes are posted! 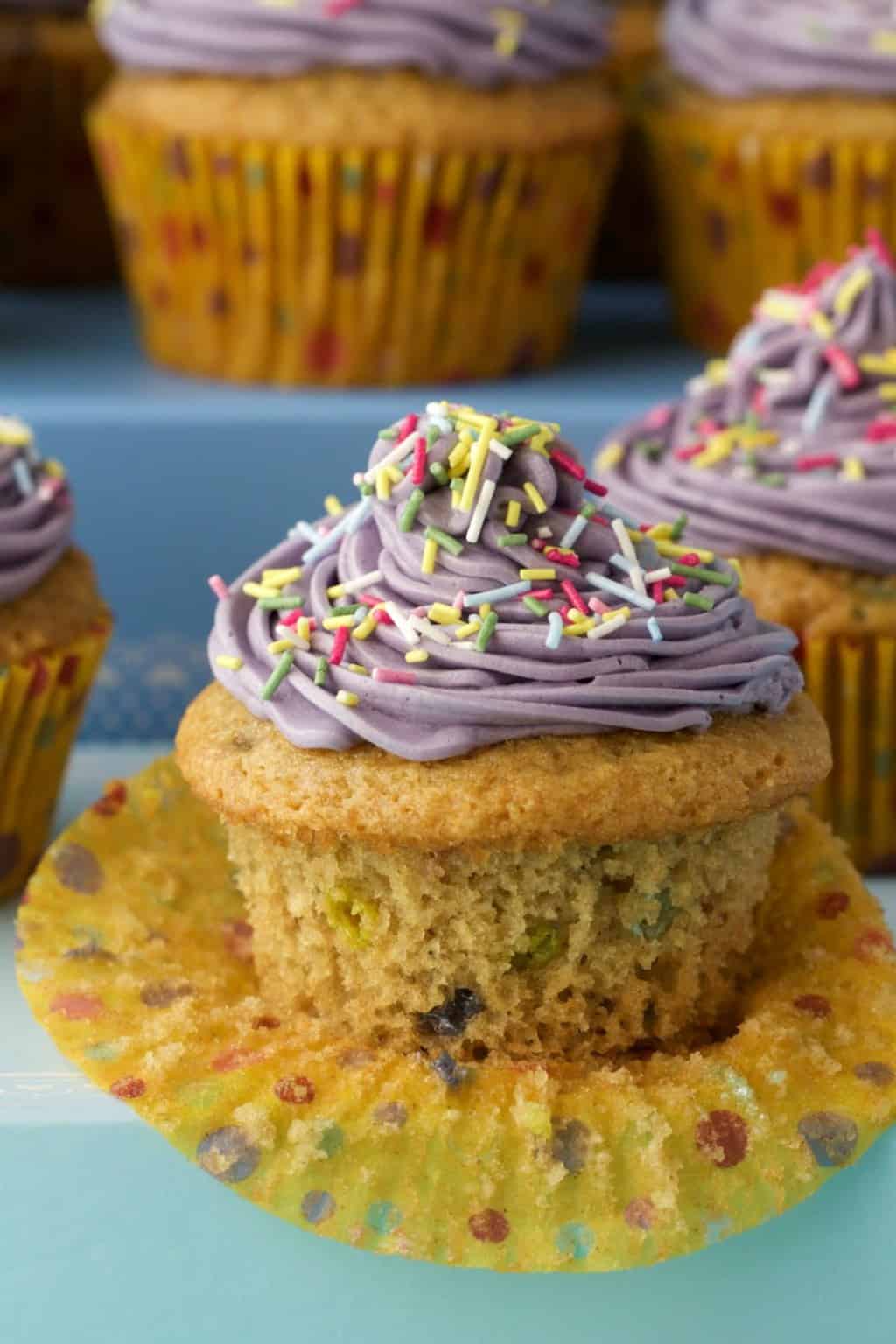 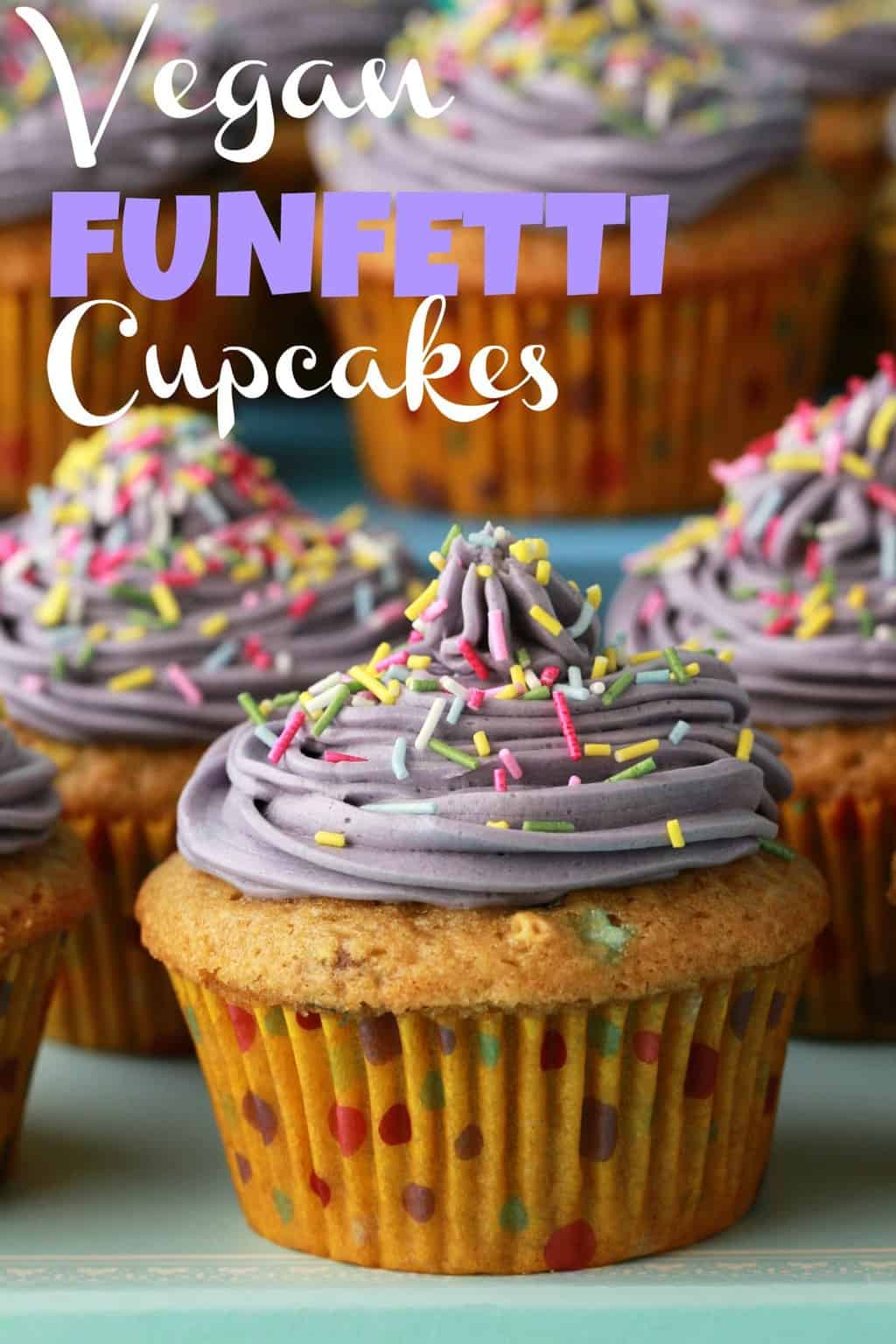 For the Funfetti Cupcakes:

For the Vanilla Frosting:

*Sprinkles should either be rainbow sprinkles (jimmies) or non pareils (balls).

Loving It Vegan is a participant in the Amazon Services LLC Associates Program, an affiliate advertising program designed to provide a means for sites to earn advertising fees by advertising and linking to Amazon.com. This site may contain some of these links to Amazon.com. If you make a purchase through one of those links, Loving It Vegan will receive a small commission from the purchase at no additional cost to you.
Previous Post: « Easy Thai Pumpkin Curry
Next Post: Vegan Pumpkin Cake with Cinnamon Buttercream Frosting »