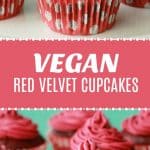 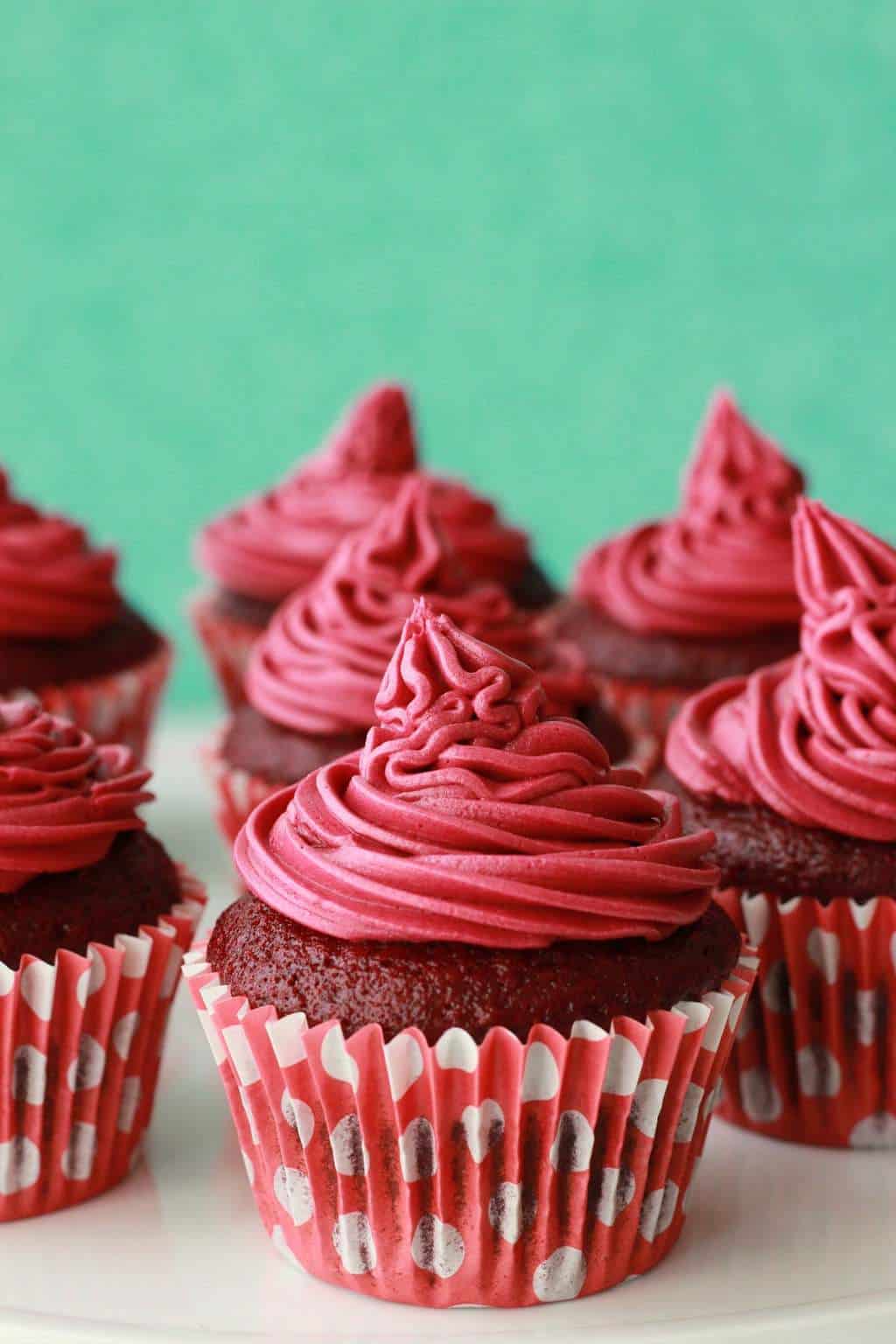 Have you ever seen such gorgeousness as these vegan red velvet cupcakes? Or is that just me blowing my own trumpet since I made them and all.

Well I was mighty impressed with how these turned out. Not least because I finally found a shop that sells gorgeous cupcake liners. Oh my – these have just changed my life I tell you!

Well you know, it’s been a long time since I ate non-vegan cake. I mean like over a decade. So I really can’t remember what it’s like. So it’s not like I’m going to eat a non-vegan red velvet cupcake alongside one of mine and compare them or anything.

So even though I knew these were very good, I wasn’t sure if they were comparatively as good as some ridiculously light and fluffy non-vegan cupcakes. 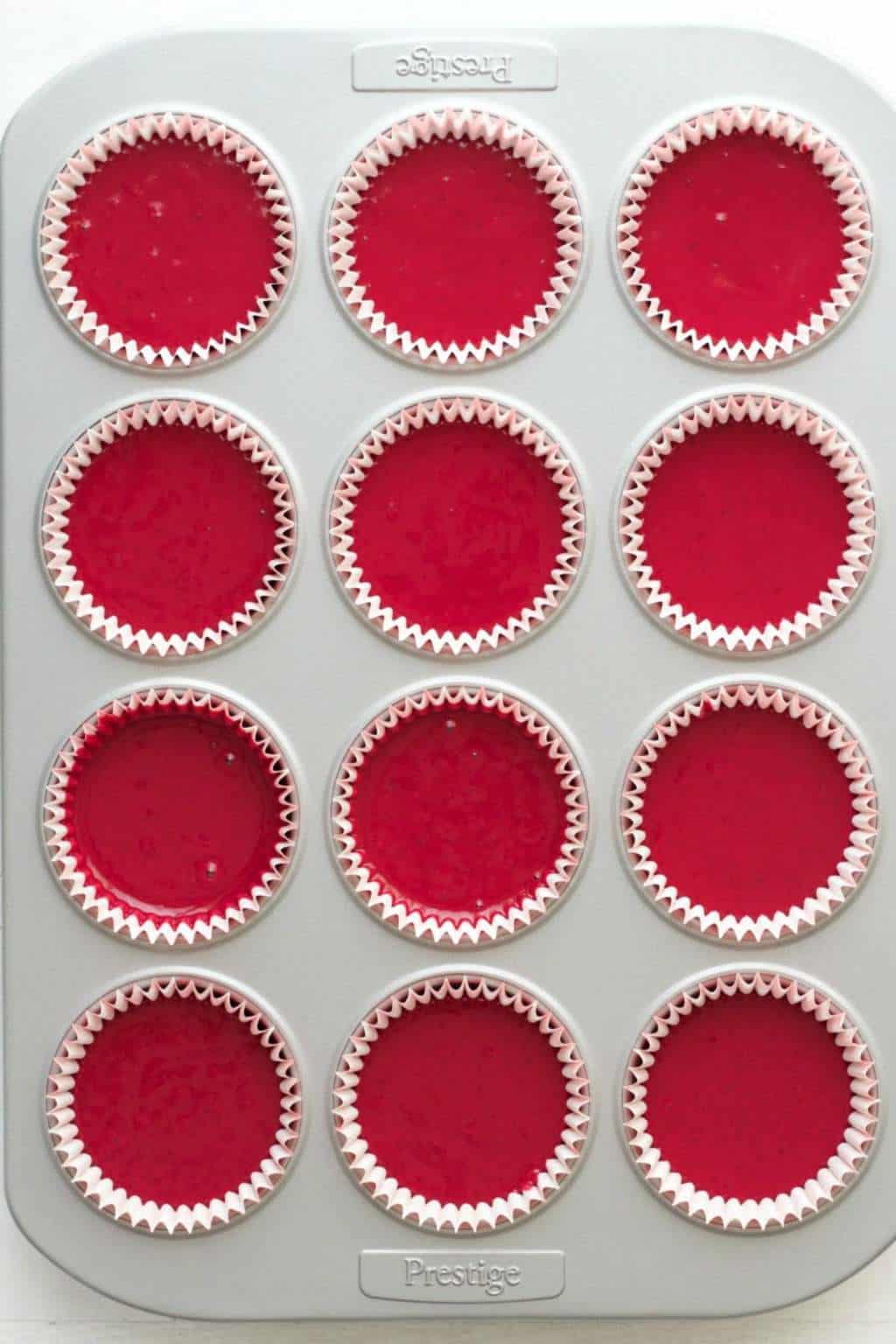 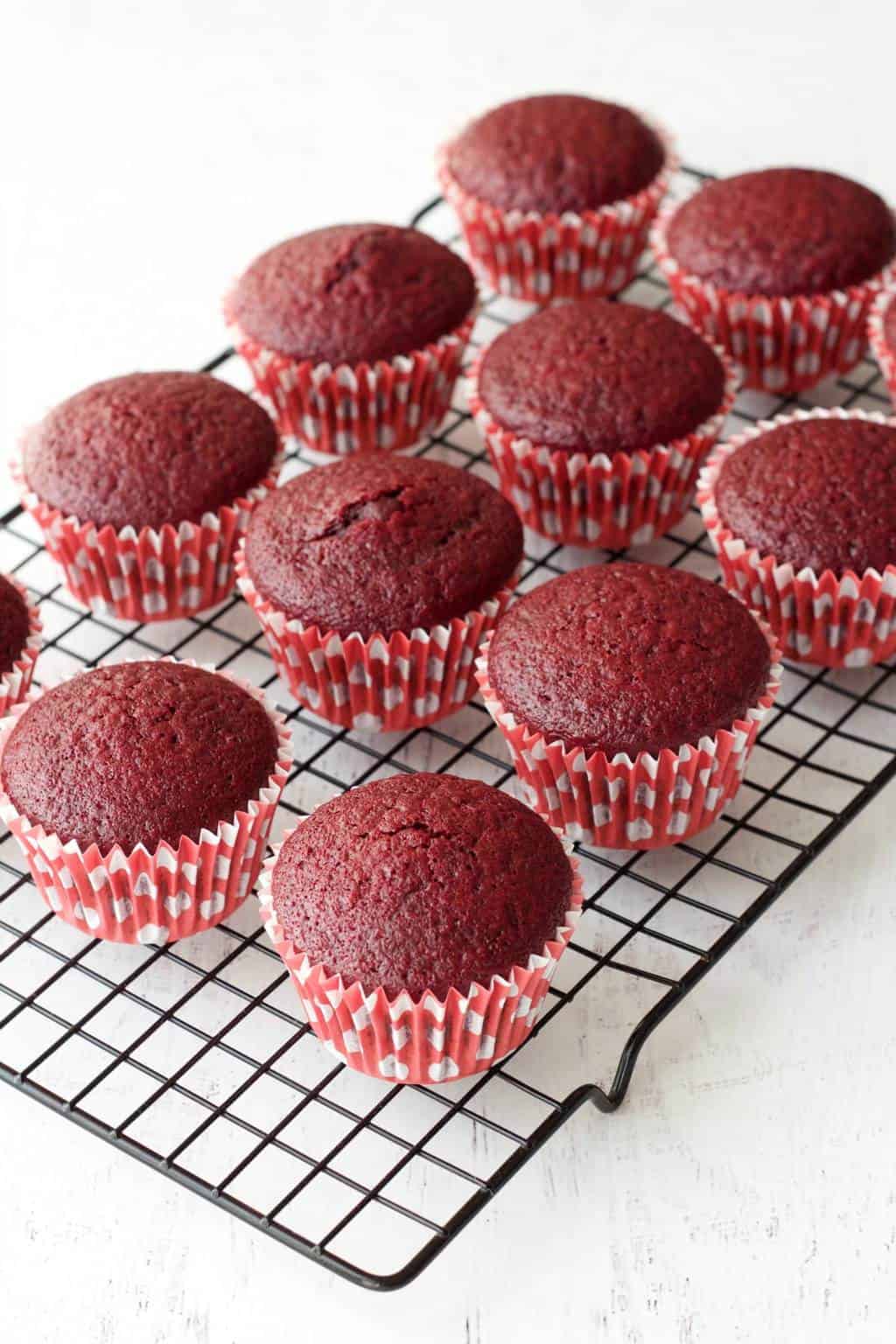 Well….any doubts I might have had were banished after Jaye took a batch of these to work. He called me from the office to tell me that they had disappeared from the kitchen before the department secretary had even had a chance to send out an email about them.

And when he next crossed the office, people were flipping out about how good these were! He hadn’t even mentioned yet that they were vegan! Light, fluffy, moist, simply perfect! These were some of the words used. He said people were like congratulating him on how good they were. This was music to my ears.

So yes dammit – they match up very very well. Woohoo! 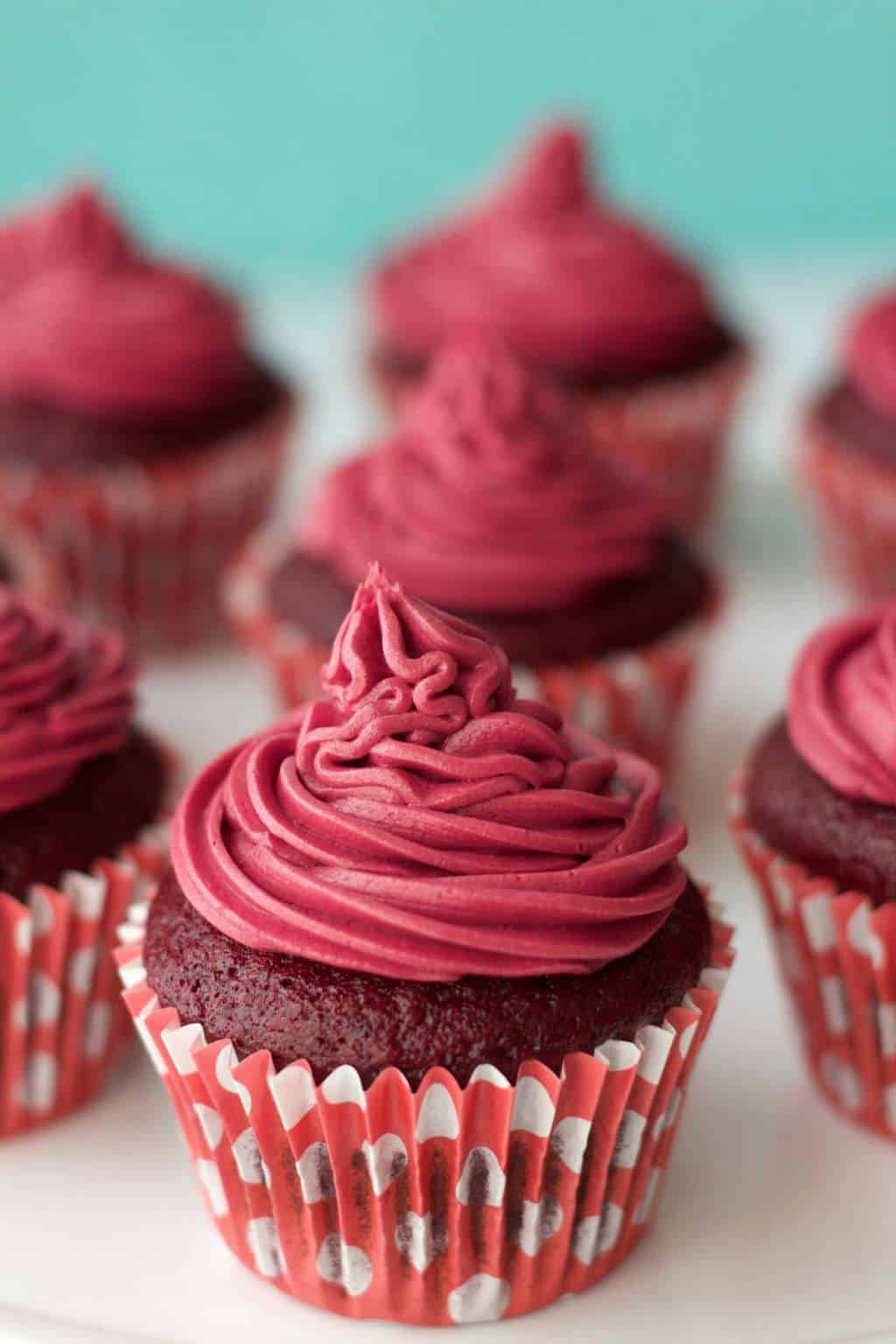 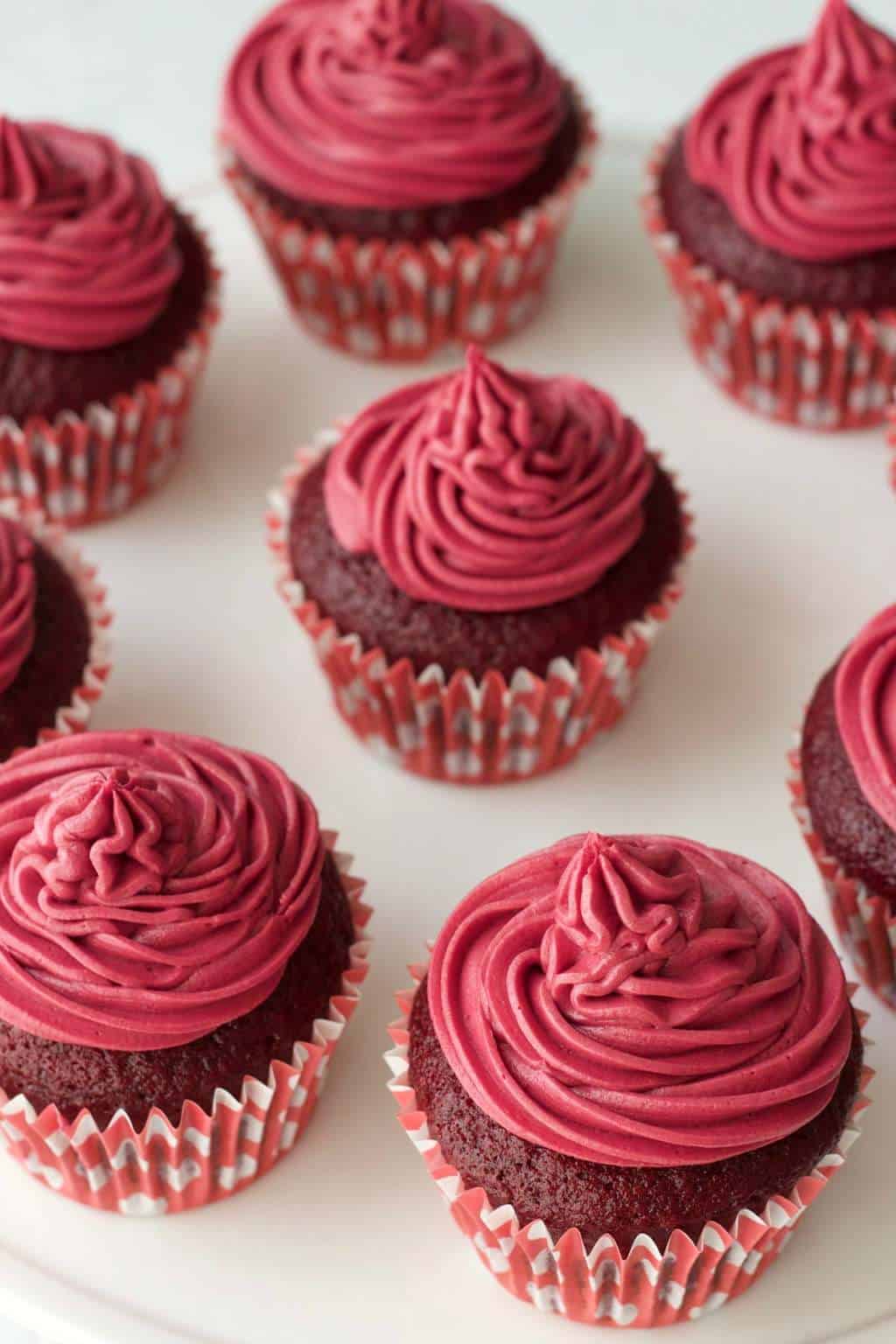 I was first of all going to pair these with a white frosting, I thought red and white would be very pretty. But then at the last minute I decided to go with double red velvet, because why not?

And it worked out so extremely well, I was enormously pleased with it.

However, what does add to the flavor of red velvet is those hints of chocolate and vanilla. So I added some vanilla and some cocoa to the frosting and the richness and red velvet deliciousness comes through fabulously. 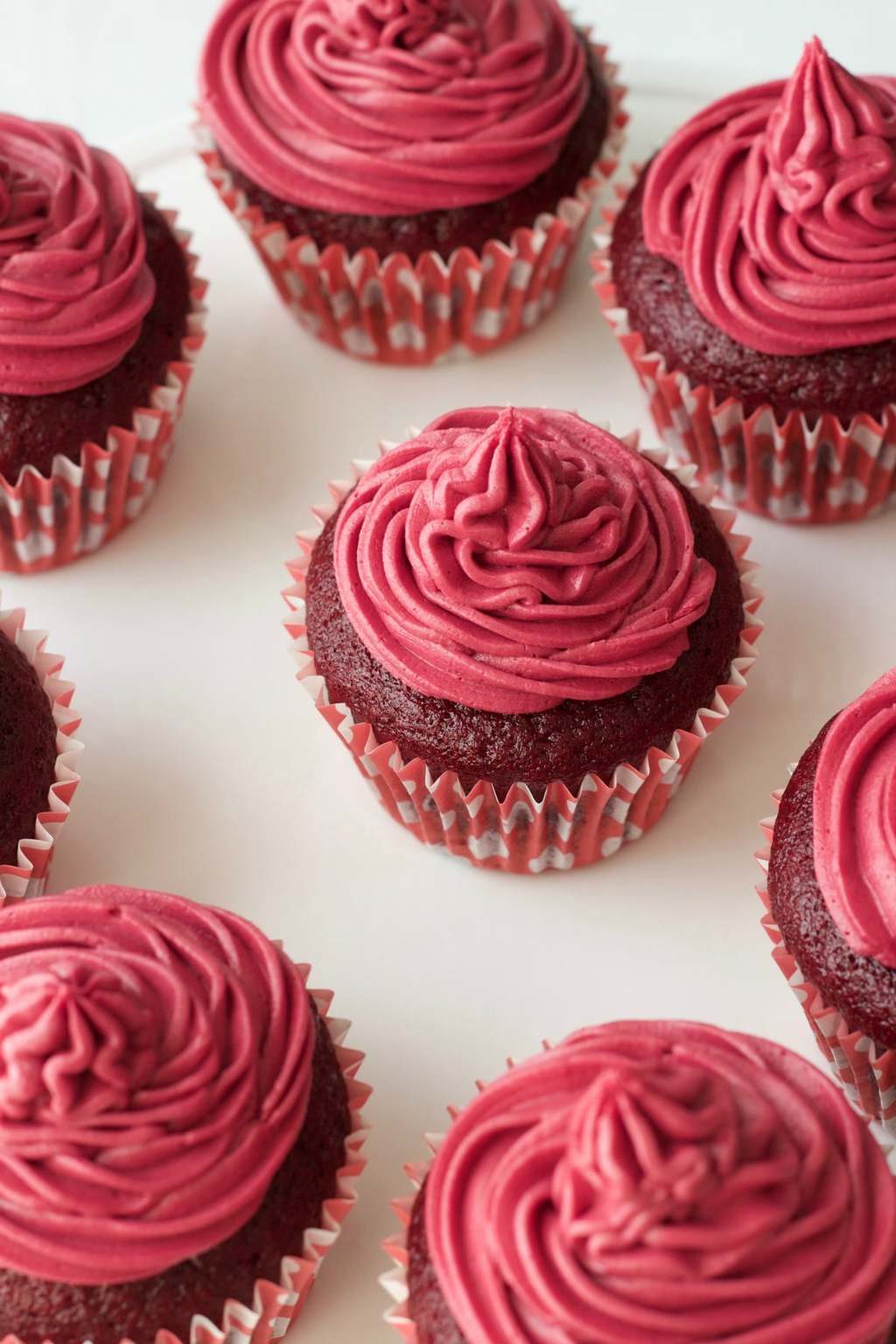 And as I explain over on that recipe, I don’t think beets work here at all for the color. It’s not like I didn’t try it – I did – and it didn’t work out, not even a little bit! Congrats to anyone who gets beets to work, but it’s not me.

In fact I have some opinions about what belongs in baking. Cauliflower frosting? Black bean brownies? I haven’t got my head around these concepts, though I quite easily got my head around chickpea water for chocolate mousse – I’m inconsistent I freely admit it.

And on that note, beets in red velvet cake? Not for me. I’m content with using a bit of red food color to get the beautiful red color in these cupcakes. 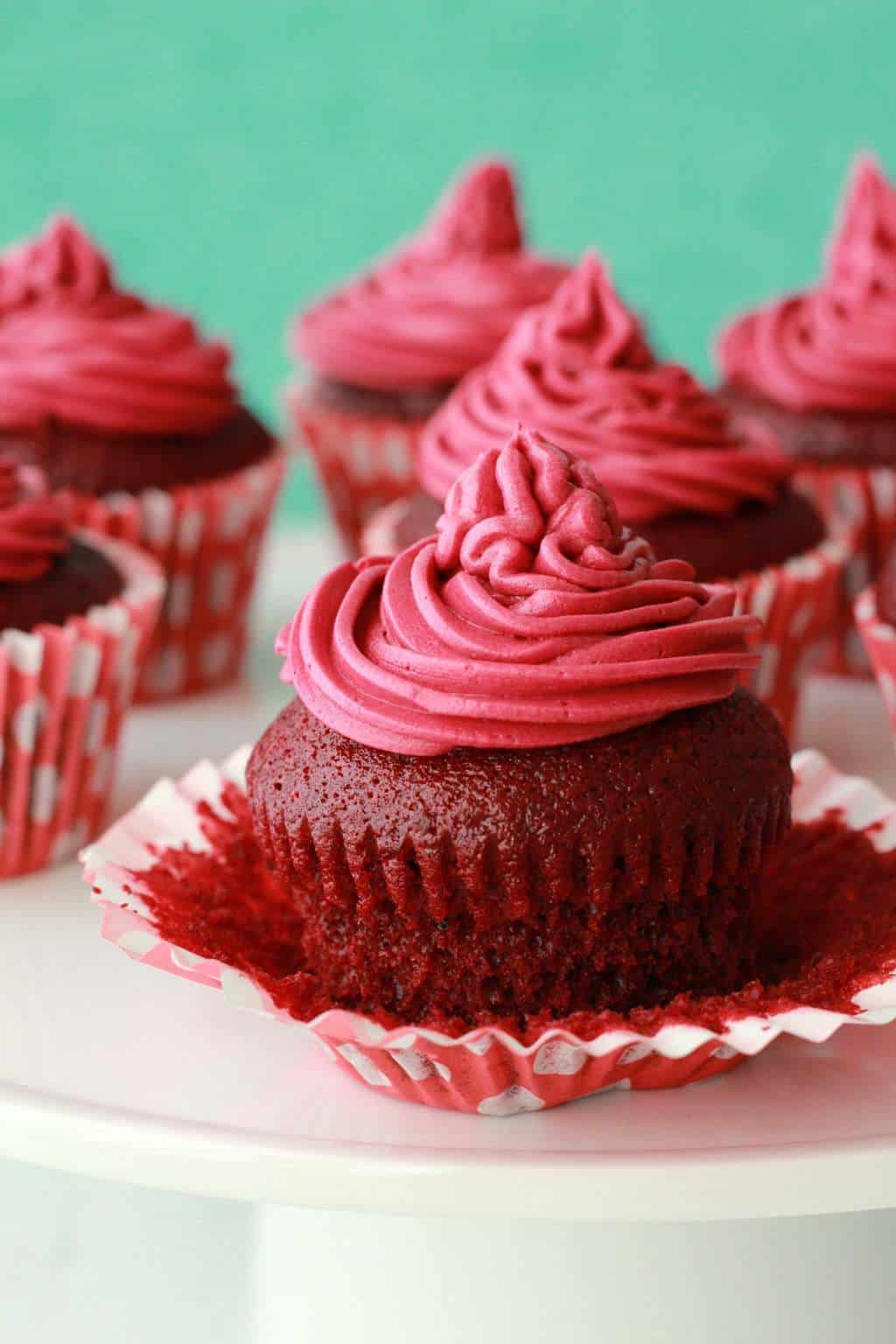 These vegan red velvet cupcakes with red velvet frosting are simply amazing! They are:

Keep them covered at room temperature where they will stay perfect for a couple of days, or covered in the fridge where they will last for up to a week, but they’re most delicious when fresh. 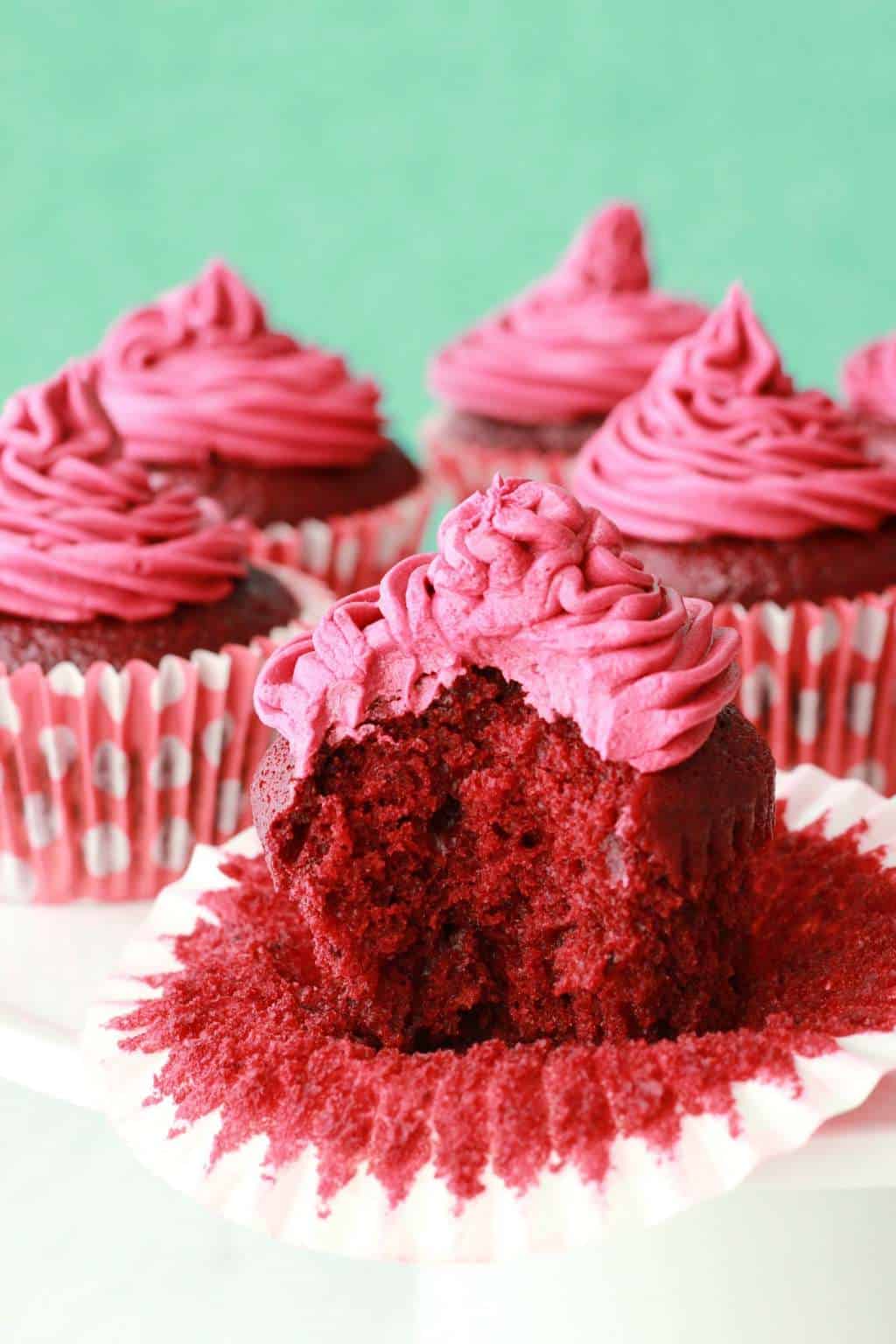 I’d love to know what you think of these vegan red velvet cupcakes!

If you have any questions or comments about this recipe, please post them down below. And please rate the recipe as that is super helpful!

Sign up to our email list as well, you’ll get an awesome free recipe ebook, and you’ll stay updated with all our latest recipe posts! 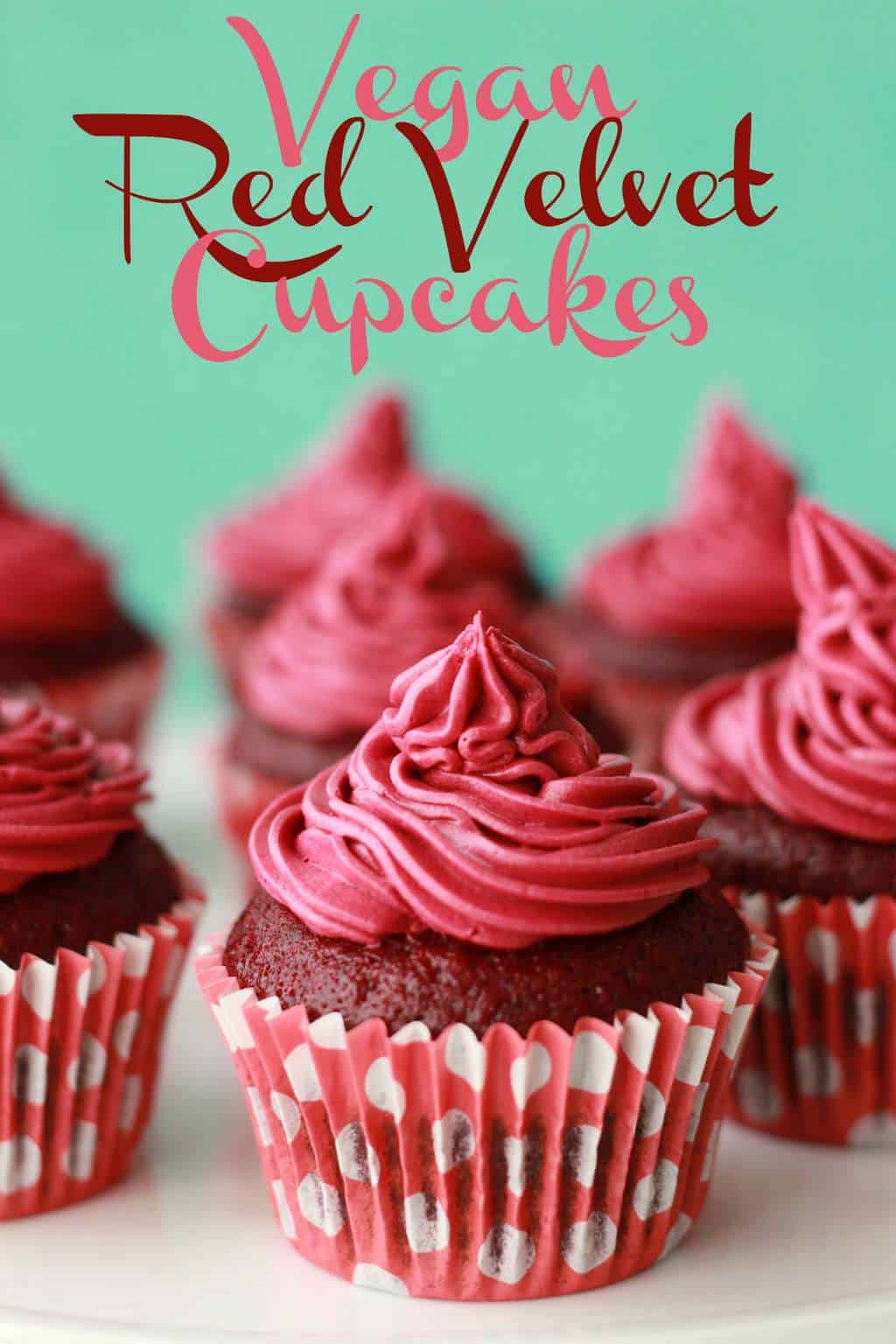 For the Red Velvet Cupcakes:

For the Red Velvet Frosting:

*Weigh your flour for the most accurate results.

*You can use a different vegetable oil such as canola oil if you prefer.

*You can use apple cider vinegar instead of white vinegar.

*Nutritional information is for 1 cupcake including a generous amount of red velvet frosting.

Loving It Vegan is a participant in the Amazon Services LLC Associates Program, an affiliate advertising program designed to provide a means for sites to earn advertising fees by advertising and linking to Amazon.com. This site may contain some of these links to Amazon.com. If you make a purchase through one of those links, Loving It Vegan will receive a small commission from the purchase at no additional cost to you.
Previous Post: « Creamy Asparagus Pasta
Next Post: Double Thick Creamy Papaya Smoothie »