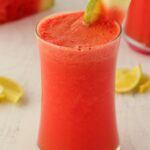 This 2-ingredient watermelon smoothie is refreshing, hydrating and invigorating and fabulous for breakfast or a post-workout snack.

You might know (I’ve mentioned it before) that I spent a few years as a raw vegan – with a focus on fruit.

It was a bit of a joke in the office – to the extent that when there was a secret santa one year, I was given a massive (and I mean MASSIVE) joke mug saying ‘LARGE’ over the front.

Yes, I went large on the smoothies. Very large!

Now while I am no longer raw vegan and don’t really recommend it either, the watermelon smoothie breakfasts were not a hardship!

In fact, watermelon is one of the most hydrating fruits and yes, my skin was pretty fabulous when I was drinking this every day!

This smoothie is just 2-ingredients, it really couldn’t be simpler, or easier to throw together.

And served super cold, it is one of the most refreshing things you could drink.

I deliberately kept this smoothie simple, the reason being that watermelon doesn’t mix well (digestively speaking) with too many other fruits, AND then there’s the fact that a watermelon smoothie tastes best when it’s more like an easily drinkable juice, rather than a super thick smoothie.

So that’s why I went with lime. Watermelon and lime flavors blend beautifully, with one flavor simply enhancing the other. There’s no clashes in flavor, or contrasts in texture and that’s just perfect for the purposes of this refreshingly delicious smoothie.

I didn’t use ice in this smoothie, rather my trick to serving up a deliciously cold watermelon smoothie is to keep the watermelon in the fridge.

I prefer this to using ice, because ice dilutes the flavor.

However, if you haven’t had time to chill your watermelon, then no worries, use some ice. The important thing is that this smoothie be served cold!

You will love this watermelon smoothie, it is:

I think the best time to have this is at breakfast! But of course it works anytime of day. It’s just so fabulous for breakfast as it rehydrates you so perfectly and charges you up for the day ahead!