Home » How To » How To Make Vegan Whipped Cream 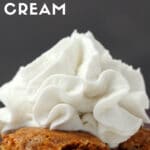 Whipped cream has so many uses and when you find yourself going vegan or dairy-free, you might be worried about what there is to replace it!

Whipped coconut cream is it.

Making your own vegan whipped cream is an essential skill when it comes to making vegan desserts.

Wherever you would have used regular whipped cream – use this instead!

Vegan whipped coconut cream can be piped onto cakes, cupcakes or vegan pies. In these photos I’ve demonstrated a couple of different types of piping tips to show you how it can look on top of a delicious vegan apple cake (and vegan brownies in our video).

How To Make Vegan Whipped Cream

Some brands of coconut cream can over-whip if you go too long and start to separate. If your cream is quite thick to start off with, you might not need to whip it for long at all, as with the batch you see pictured above.

If your cream is very floppy and barely firm at all when it separates from the water in the can, then it might not whip well at all. In this case, whip it for a longer time to see how firm you can get it, and once you’ve got it as firm as possible, you can add in ¼ – ½ tsp xantham gum and whip that in, it will thicken it up fast and can save it from being a dud batch.

Experiment with different brands until you find a good one. Unfortunately sometimes you find a great one and then the manufacturers change the formula slightly and then it doesn’t work so great anymore (happened to me recently!). If you find a brand of coconut cream that works great for making vegan whipped cream, then just leave a few cans in the top of your fridge permanently. This is what I do, so I’m always ready to whip up a batch of whipped cream on short notice.

Some brands just don’t work well at all. Some might look like they’re going to work but then when you try and whip them, they start to separate and look all grainy. Experiment until you find a brand that works great for you.

Coconut creams in a carton won’t work for this at all.

Another option you have if you can’t be bothered with experimenting to find a good brand to use is just to get a can of coconut whipping cream. It also needs to be chilled before it will work, but it works great every time!

Whipped coconut cream can be stored in the fridge where it will stay good for up to a week. It’s not at all freezer friendly so I don’t recommend freezing this at all.

Serve This Coconut Whipped Cream On: 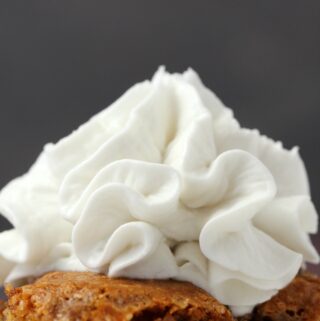 Serving: 1Serve | Calories: 246kcal | Carbohydrates: 9.5g | Protein: 2g | Fat: 22g | Sugar: 7.5g
DID YOU MAKE THIS RECIPE? Rate it & leave your feedback in the comments section below, or tag @lovingitvegan on Instagram and hashtag #lovingitvegan
« How To Make A Flax Egg
How To Make Vegan Buttermilk »
5.2K shares