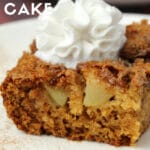 I am totally in love with this vegan apple cake. And so is Jaye, he hasn’t been able to stop eating it to tell you the truth.

I actually started out with the goal of making a vegan apple pie. But at the last minute switched gears and made an apple cake instead (and then I made a vegan apple crisp!).

And it is honestly so good, no one will miss apple pie when you present apple cake, I promise you.

And even though I have yet to make an apple pie (update: vegan apple pie is here!), I reckon this apple cake is heaps easier.

The hardest part of making this apple cake is peeling and chopping up a few apples. So basically, not hard at all.

It has all those gorgeous fall flavors like cinnamon and nutmeg and it’s topped with a cinnamon sugar combination that creates the most delicious caramelized crust on top of this cake.

And if you love everything apple then check out our vegan apple muffins too.

How To Make Vegan Apple Cake

Make up some vegan buttermilk by mixing some lemon juice and soy milk together and letting it curdle.

Add the vegan buttermilk, oil, vanilla and apple cider vinegar to the dry ingredients and mix together. Then you add your chopped apples and mix them in.

Mix up cinnamon, sugar and softened vegan butter and sprinkle this on top. Bake for 45 minutes. Serve with vegan cream. Be very very happy!

Granny smith apples. They are wonderfully firm and have a great ratio between sweet and tart. They work great for this apple cake.

Vegan Buttermilk creates a wonderfully moist texture to this cake and is so easy to make by simply mixing lemon juice into soy milk and letting it curdle. Almond milk works too, but I prefer soy milk for buttermilk if you don’t have an issue with soy as it is thicker/richer so works extremely well.

Brown sugar goes beautifully with the fall flavors of this cake so is a much better fit than white sugar.

Bake at low heat. This cake bakes for 45 minutes at 325°F (160°C). Most cakes bake at 350°F so I definitely don’t want you to make the mistake of baking this cake at that temperature if you go on automatic pilot when you set the oven (happens to me all the time!).

Weigh your flour. Want to have perfect accuracy with your cakes? Weighing your flour will do that for you.

How to Serve Vegan Apple Cake

Serve warm topped with vegan whipped cream or vegan custard. Alternatively some vegan ice cream would be divine too.

Keep leftover cake covered in the fridge where it will stay good for up to 5 days. 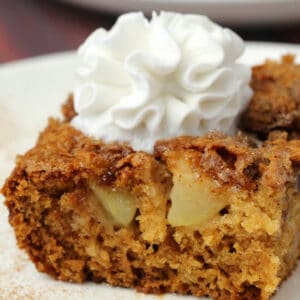 For the Apple Cake:

For the Cinnamon Sugar Topping: