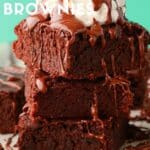 These simple vegan brownies are moist, fudgy and beautifully textured. They are also SO easy to make. Serve with vegan cream or ice cream for a fabulous dessert.

Oh wow, these vegan brownies you guys! Fudgy, rich, decadent and everything a brownie should be.

Topped with vegan whipped cream and drizzled with melted chocolate because dessert.

The tops get all nice and shiny and cracked, which is just perfect for brownies don’t you think?

The best way to eat these brownies is with some vegan whipped cream or some delicious vegan ice cream. If you serve them nice and warm from the oven with cream or ice cream, well that’s even better!

Cocoa powder. There is a lot of cocoa in this recipe, which gives it the extremely rich chocolate flavor.

White granulated sugar. To counter-balance lots of cocoa, you need more sugar, so don’t be shocked out of your little cotton socks by the fact of 2 cups of sugar. Every granule is put to good use to create the most delicious vegan brownies ever.

Vegan buttermilk. We used homemade vegan buttermilk in this recipe. It’s ideally made with soy milk for a really rich and creamy version. However, it can also be made with almond milk.

Vegetable oil. This can be switched for canola oil. Melted coconut oil also works but can be harder to mix in since it’s a thick batter.

How To Make Easy Vegan Brownies

If you’re keen to try a gluten-free version of these brownies, then check out our vegan gluten free brownies recipe.

These brownies are delicious on their own but serving them warm with vegan whipped cream or vegan ice cream and drizzles of melted vegan chocolate is next level!

Leftovers keep very well at room temperature or in the fridge for up to a week. You can warm them up in the microwave and then serve.

You can also freeze them for up to 6 months! 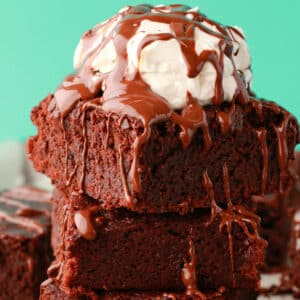