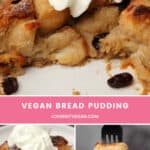 This vegan bread pudding is golden and crispy on the outside and soft and delicious on the inside. Super easy, perfect comfort food. Divine served warm with vegan cream or ice cream.

I grew up eating bread pudding, it was one of the few things my mom liked to make.

My mom freely admits she hates cooking and baking, but even she could get inspired to make a good bread pudding here and there. It’s easy enough and you pretty much always have the ingredients on hand.

This vegan bread pudding will surprise you with how good (and easy) it is. If you’ve never had bread pudding before, then don’t worry, it’s not nearly as weird as it sounds.

Sure, the main ingredient IS bread but let me tell you, it makes a great dessert. No really, it does.

How To Make Vegan Bread Pudding

How To Serve Vegan Bread and Butter Pudding

This is a dessert that does need a topping.

The best options are vegan whipped cream, or vegan ice cream. Vegan custard would be really delicious too.

If you’re serving it with vegan whipped cream then definitely sweeten your cream with a little powdered sugar. This is not a super sweet dessert and if it’s served with plain cream it likely won’t taste sweet enough.

With sweetened vegan cream it is divine and this is how we served it in these photos, but vegan ice cream or custard are most definitely going to be great too.

This dessert is best served immediately, but leftovers can be kept covered in the fridge for 3-4 days and then reheated. It definitely must be served warm! 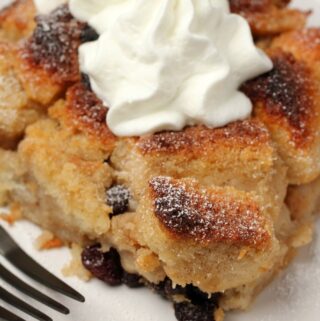